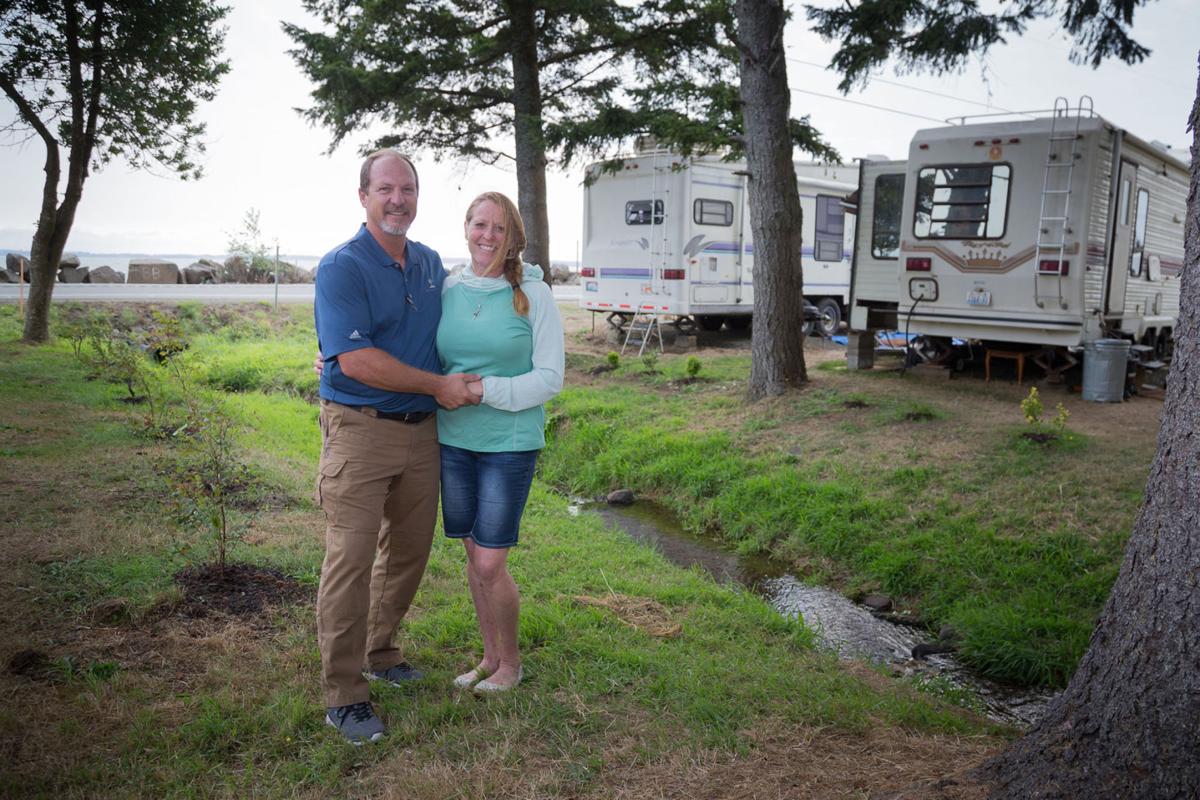 Preston and Theresa Devers are the new owners of The Bridge RV Park and Campground, formerly Mauch's Sundown RV Park in Chinook. “We fell in love with the beauty and the bounty of the river,” Theresa said. “And the view is just spectacular.” 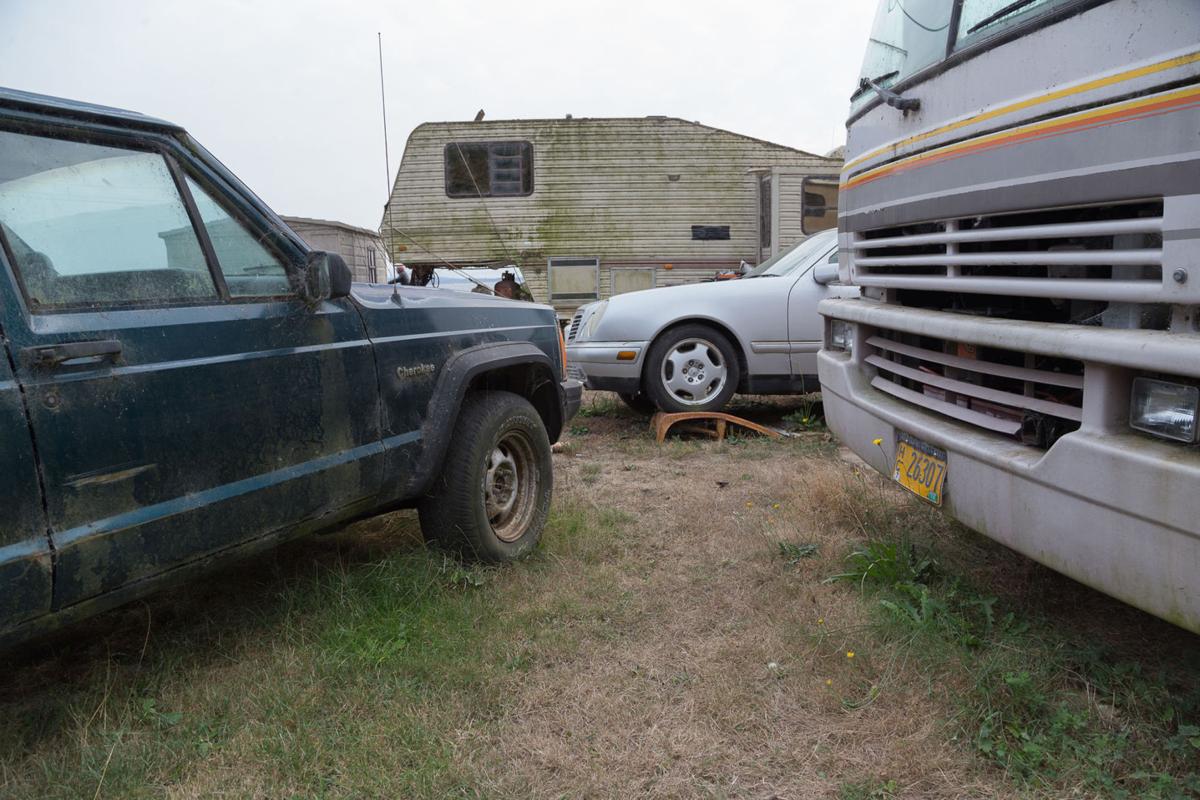 Removing clutter and abandoned vehicles has been a focus from the start. “We want to work with the county and the state to make this a better place,” Preston said.

Preston and Theresa Devers are the new owners of The Bridge RV Park and Campground, formerly Mauch's Sundown RV Park in Chinook. “We fell in love with the beauty and the bounty of the river,” Theresa said. “And the view is just spectacular.”

Removing clutter and abandoned vehicles has been a focus from the start. “We want to work with the county and the state to make this a better place,” Preston said.

MEGLER — Over the past 15 years, Preston and Theresa Devers arrived each August during the apex of the annual salmon run. They would bring their kids and boat, and secure the same spot year after year at the RV park that overlooked the Astoria-Megler Bridge. For about four weeks, they would fish and enjoy the natural wonders of the area before returning to their home in Tacoma.

“We fell in love with the beauty and the bounty of the river,” Theresa said. “And the view is just spectacular.”

On Aug. 17, the Devers officially changed from part-time tenants to full-time owners after purchasing the park from Weldon Pior. The park, formerly Mauch’s RV Park, was renamed The Bridge RV Park. Pior first approached the Devers about purchasing the park about five years ago, but negotiations fizzled after a deal couldn’t be finalized.

“Then this past year we met and he said he was ready to get rid of all of it and I said ‘Okay, now we can talk,’” Preston said.

Under Pior, the park was in the news for alleged county code violations. The Devers are taking steps to address concerns.

While the deal is done, the work on the park is just beginning. Septic and surface-water runoff issues that have been a problem in the past were among the first addressed. Instead of spending their visits fishing and leisurely gazing at the view, the Devers have been busy removing debris, derelict vehicles and planting palm trees. Five abandoned trailers were removed in the first month.

“It was called ‘Tweaker Heaven,’” Theresa said, referencing one online review. “The cops were always showing up because of fights or people selling drugs,” Preston said.

Landscaping and new paint are among the cosmetic changes, but the Devers intend to change the culture, beginning with the tenants.

Sixteen to 25 people live year-around at the park among 45 total lots, divided between long and short-term guests. When word that a new owner was taking over, worry spread among some tenants.

“There was a rumor that everyone was going to get evicted,” Theresa said. “But it will be fine if you pay your rent and abide by the rules.”

Attracting and maintaining responsible tenants has been a focus for the new owners, who held a meeting in mid-August to explain changes and assuage concerns among current tenants. The rate, formerly $275 per month for annual tenants will increase to $325, an 18 percent increase, beginning Oct. 1. Non-payment has been a problem that’s plagued the park in the past.

“Before we took over, there were seven evictions because of non-payment or drug issues,” Preston said. Several tenants were behind in rent, but one allegedly remained for nearly an entire year, refusing to pay rent and daring to be taken to court.

“He was notorious for coming to RV parks and eking it out until the sheriff showed up,” Preston said. “I said ‘Look, you gotta go.’”

The tenant eventually left and said they would be back to pick up their trailer. Six weeks later, the trailer still sits.

“We’re in the process of an abandonment order,” Preston said. “These are some of the things we’re slowly trying to get cleaned up.”

The Devers are considering increasing deposit requirements for new guests, primarily as a way to deter deadbeat tenants.

“The biggest issue we’ve seen over the years is people that get evicted leave their trailer and don’t pay their bills,” Preston said. “We want to protect ourselves as much as we can without making it too big of a burden.” The new guidelines and rate increases are aimed at adding accountability while reducing clutter.”

“You can have some chairs and some plants out front, but we don’t clutter laying around,” Theresa said. “It’s called The Bridge RV Park because it’s a place to connect. We want people to feel connected to their home and community.”

Preston was blunt in his initial assessment of the park.

“The park hasn’t been maintained,” he said. “It’s run down.”

The location of the park, and its role as a first impression for Pacific County for motorists coming north on U.S. Highway 101, isn’t lost on the couple.

“This place in the summertime is tourist route 101,” Preston said. “It’s the first place they see when they cross the bridge into Washington. We want the first impression to be huge. We want them ‘Wow, look how beautiful this is. Not ‘Ew, that’s kind of a dump, let’s keep going.’ Our goal is to make this a welcoming view when you first get to Washington rather than an eyesore.”

“There is so much work to do, but all in good time and step by step,” Theresa said. “We’re going to make this a place that people want to be and take pride in.”