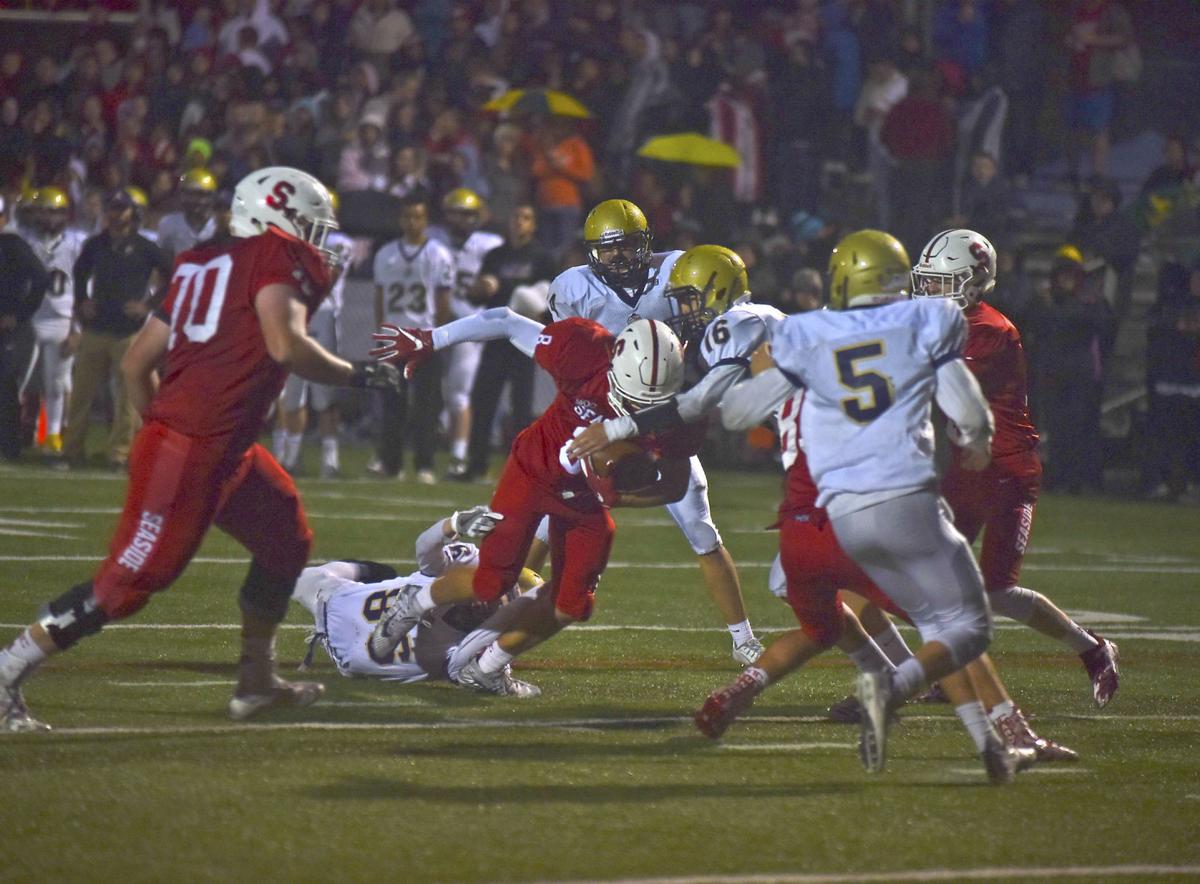 Duncan Thompson carries the ball for Seaside during the Clatsop Clash. 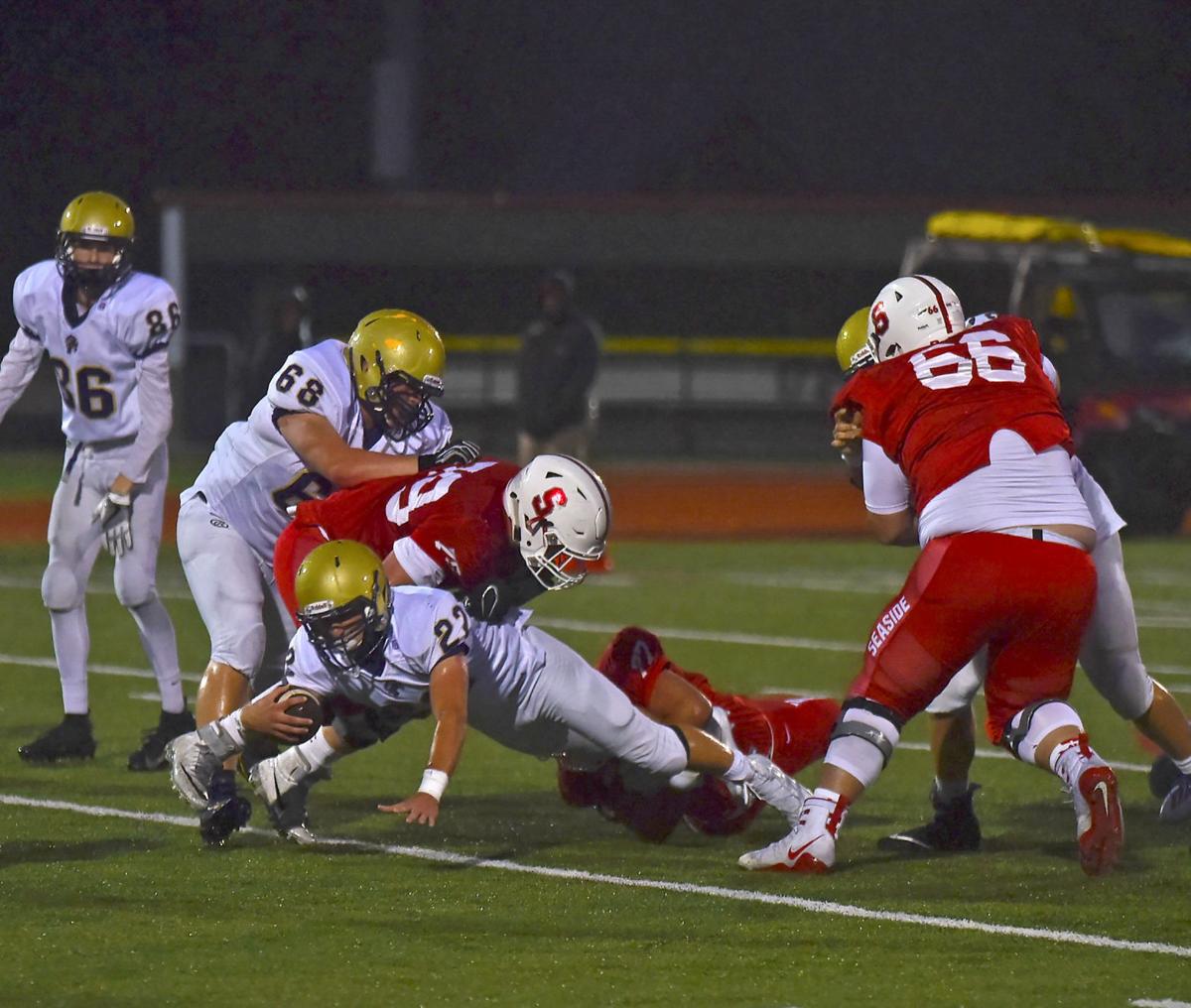 Niko Caruana dives forward with the ball for the Fishermen. 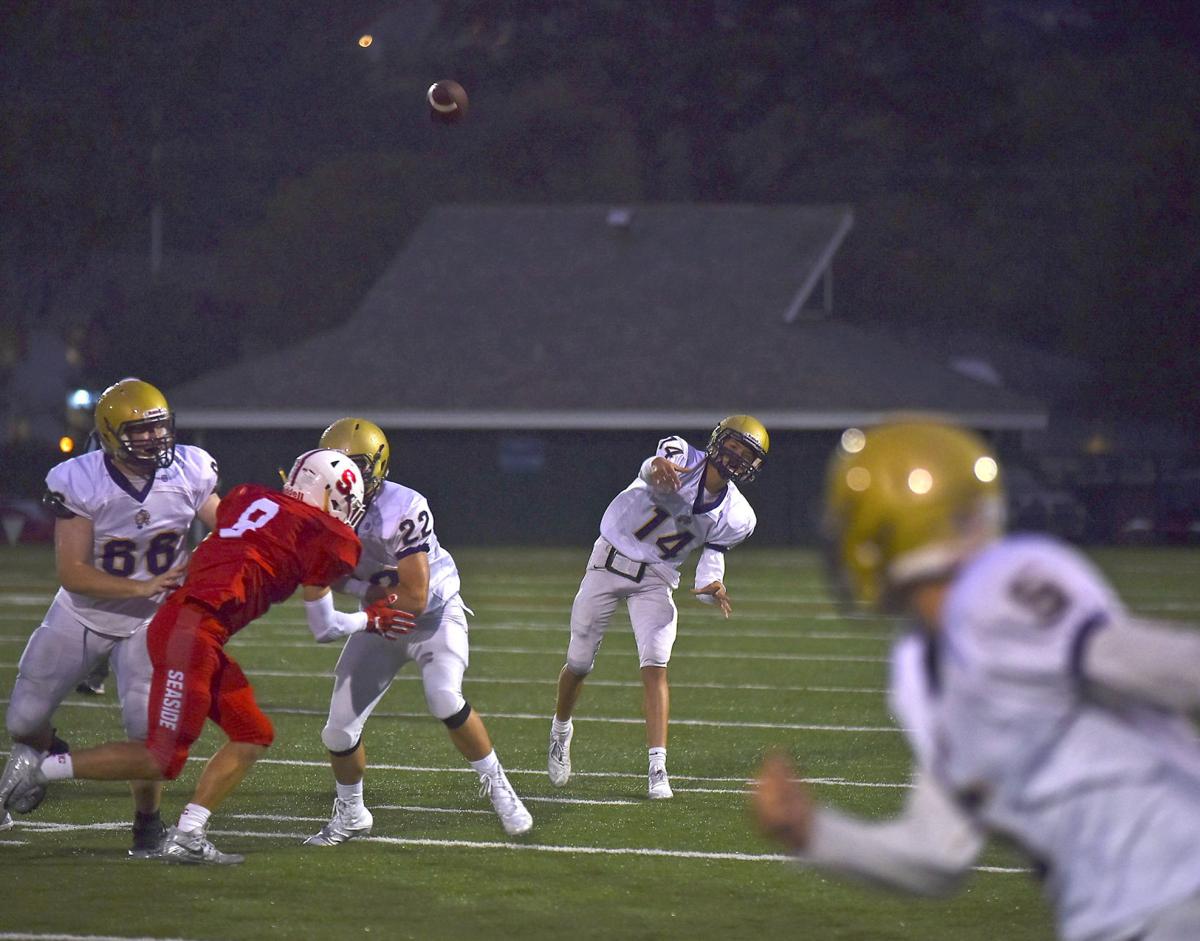 Bo Williams heaves the ball down the field toward a receiver for Astoria.

Duncan Thompson carries the ball for Seaside during the Clatsop Clash.

Niko Caruana dives forward with the ball for the Fishermen.

Bo Williams heaves the ball down the field toward a receiver for Astoria.

SEASIDE — The Astoria Fishermen have been playing some top notch football this month, with a come-from-behind win over Stayton and a narrow loss to previously No. 1-ranked Estacada.

But, as actor Dennis Quaid said in The Right Stuff, “Now hold on there … YOU are looking at a whole new ball game here.”

That’s how it was for the Fishermen this week, as Astoria paid a visit to Broadway Field to face the mighty Seaside Gulls.

And the new No. 1-ranked Gulls are indeed a “whole new ball game.” The only team at the 4A level with the real “right stuff” dominated from start to finish in a 55-7 win Friday over Astoria (technically the closest game of the night in Clatsop County), in a Cowapa League opener.

It took an average of just three plays to score on each of Seaside’s eight scoring drives (with two one-play scoring drives), and the Gulls rolled up 329 yards of total offense on the rain-slickened turf.

Of course it helps when nine of their 13 drives began on Astoria’s half of the field, as the Seaside defense limited the Fishermen to just nine first downs (one in the second half), and 67 yards rushing.

It took less than five minutes for the Gulls to score all the points they would need.

Seaside drove 58 yards in five plays for its first score, a short pass from Payton Westerholm to Alexander Teubner, which Teubner turned into a 41-yard touchdown.

Astoria’s nightmare start continued when the Fishermen were forced to punt on their first possession. A mishandled snap on the punt was recovered by the Gulls at the Astoria 20-yard line, and Duncan Thompson scored on the very next play for a 14-0 lead.

It took the Gulls four plays to score on their third possession, a 10-yard TD pass from Westerholm to Teubner.

Teubner caught two passes (both for touchdowns) and rushed for 115 yards on 15 carries, while Thompson ran six times for 77 yards, adding TD runs of 23 and 35 yards.

Westerholm completed three passes for 67 yards and ran for a 38-yard TD in the fourth quarter.

Seaside had 17 first downs, but was penalized 13 times for 125 yards. Astoria lost four of its five fumbles.

The Gulls play a rare road game Friday at Valley Catholic, while Astoria travels to Banks.