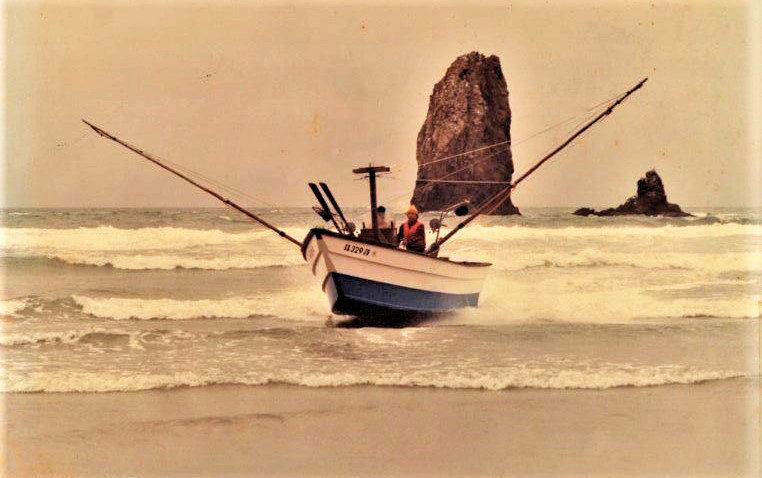 Peter Lindsey in his dory, the Schmedlow, in front of the Needles at Haystack Rock. He's with Roscoe Divine, a famous mile runner from the golden days of track and field at the University of Oregon. 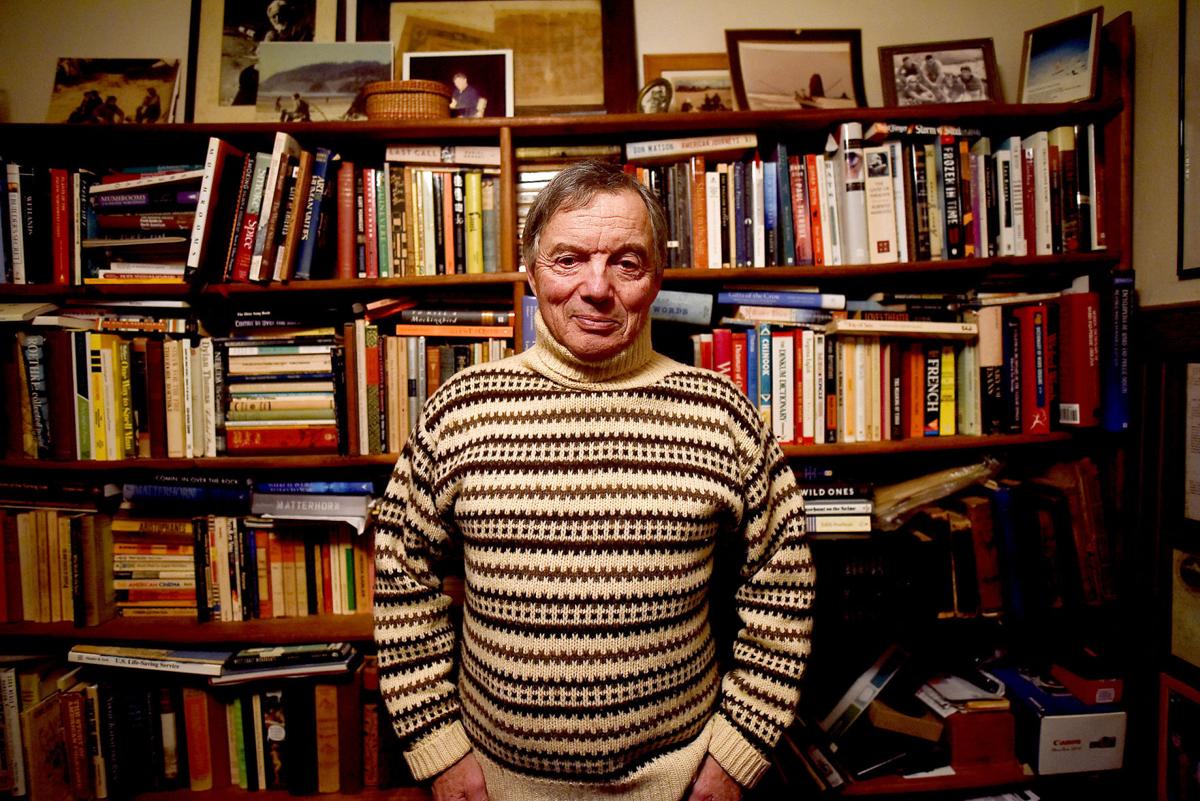 Author Peter Lindsey in his den at his home in Cannon Beach. 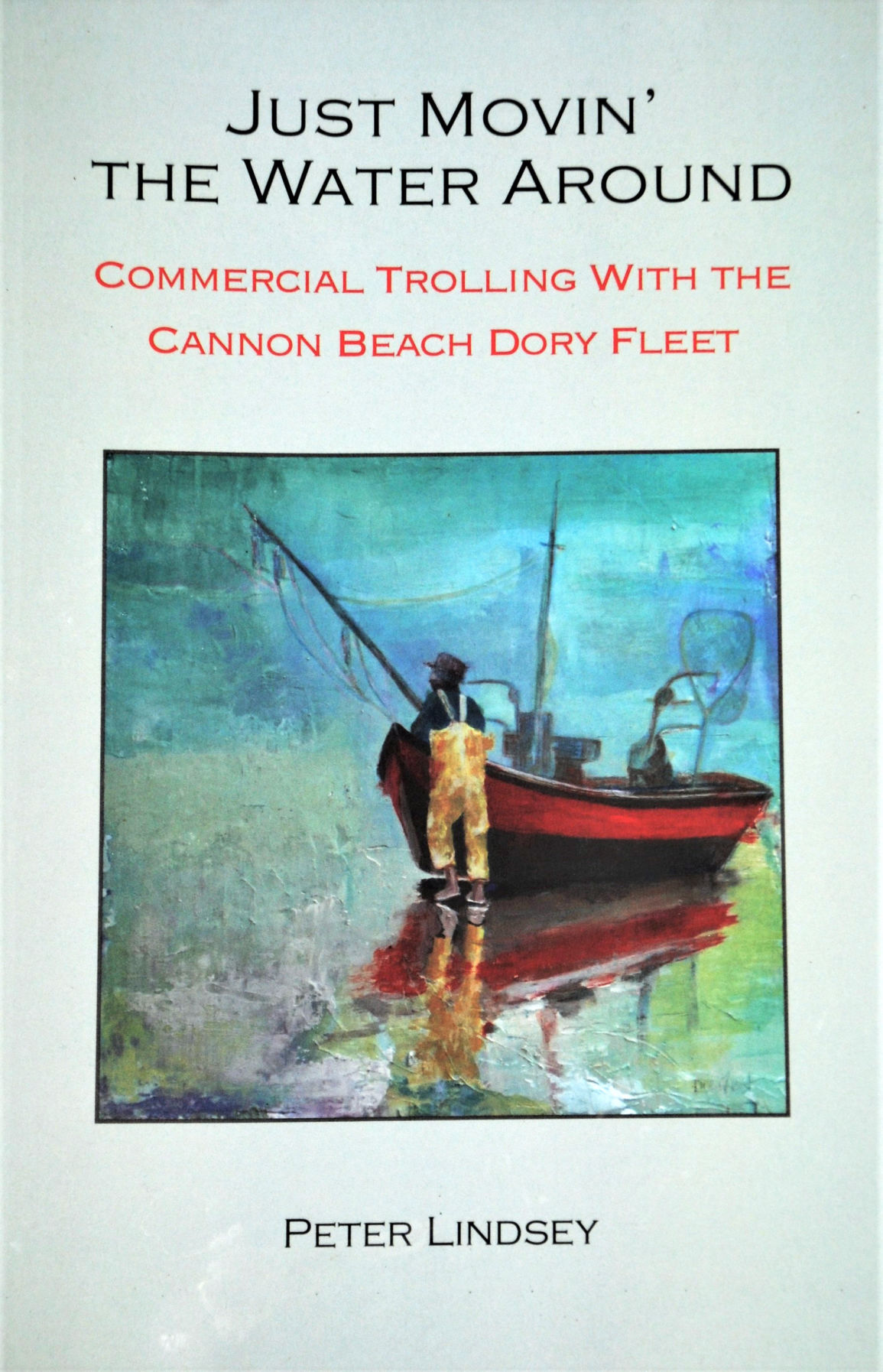 The cover of ‘Just Movin' the Water Around' by Cannon Beach author Peter Lindsey. The art is by local artist Drea Rose Frost.

Peter Lindsey in his dory, the Schmedlow, in front of the Needles at Haystack Rock. He's with Roscoe Divine, a famous mile runner from the golden days of track and field at the University of Oregon.

Author Peter Lindsey in his den at his home in Cannon Beach.

The cover of ‘Just Movin' the Water Around' by Cannon Beach author Peter Lindsey. The art is by local artist Drea Rose Frost.

In his new book about the Cannon Beach dory fleet, Peter Lindsey does more than “just movin’ the water around,” as the title hints.

He dives deep into the dory boat culture, tracing the history of the small fishing boats from Europe to America’s east coast and, finally, to the 20-foot-long West Bank dories that “slipped off the sands of Cannon Beach.”

A trained folklorist with a passion for language, Lindsey repeats the stories told to him by fishers who spent much of the 1970s in those boats seeking salmon, coho, cod, rockfish and crabs.

He also provides a dory glossary, a list of captains and their boats, numerous photos from local collections, drawings by Astoria artist Sally Lackaff and the cover art by local artist Drea Rose Frost.

“The dory fleet that operated here in Cannon Beach was an integral part of the community,” Lindsey said in an interview.

Concerned that memories of the dory era were fading, he decided to revive them. Rainmar Bartl, of Cannon Beach, helped him organize the book, raise funds and find photos, a publisher and local editors.

“It’s a slice of Cannon Beach history, a rather unique one,” Bartl said. “It’s the type of history I like, focused on what folks in a community do for a living, told through stories. I like Peter’s storytelling and wanted to help bring it to a wider public.”

Lindsey’s family has a history on the water. His older brother, Richard, built sailboats and yachts in California and Florida, and younger brother Tim worked for him. Eventually, Tim returned to Cannon Beach with a dory boat.

“He and I decided to try commercial fishing because there were quite a number of people going off the beach every day here fishing, right by the Needles next to Haystack Rock,” Lindsey said. “It was kind of enchanting. You would go out in the morning and come back at dusk.”

After their first foray into the ocean — where they caught 65 Chinook salmon — “we were hooked. It was good fun.”

Every summer for 15 years, Lindsey spent time on the ocean, often in his own dory, the Schmedlow, trying to replicate that glorious first catch but never managing to do so.

“The boat was only 20 feet long but very seaworthy, considering the size. You put that on the ocean, and it was like a mote in the eye of God, a speck on the landscape,” Lindsey said.

But things can go “dramatically wrong quickly on a boat in the ocean,” Lindsey admitted. Sometimes a wave would “erupt out of nowhere, and there was a big green wall, and you were under powered with your motor going into it, and it would cave in on top of you.

Yet, he added, “there’s something exhilarating about it.”

The camaraderie among the fishermen and women and the potential to make money superseded the terror, he said.

Dory fishing in Cannon Beach ended shortly after the U.S. Supreme Court decided in 1979 that Washington State tribes were entitled to half of the annual salmon harvest.

“We were quite disappointed … We were very close, we were good friends. We’d have fish fries in the summer, and, occasionally, we’d have a winter doryman’s ball. We’d get together, all of us who fished in the summertime.