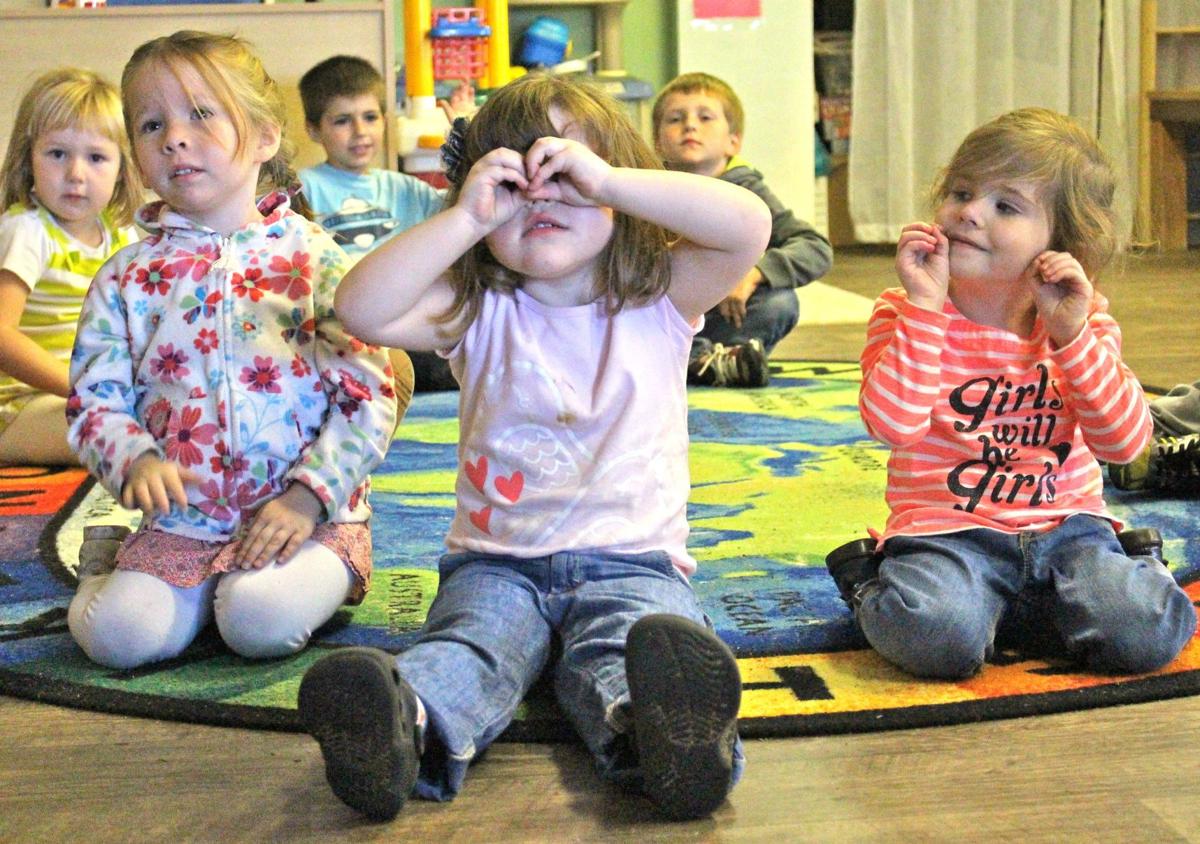 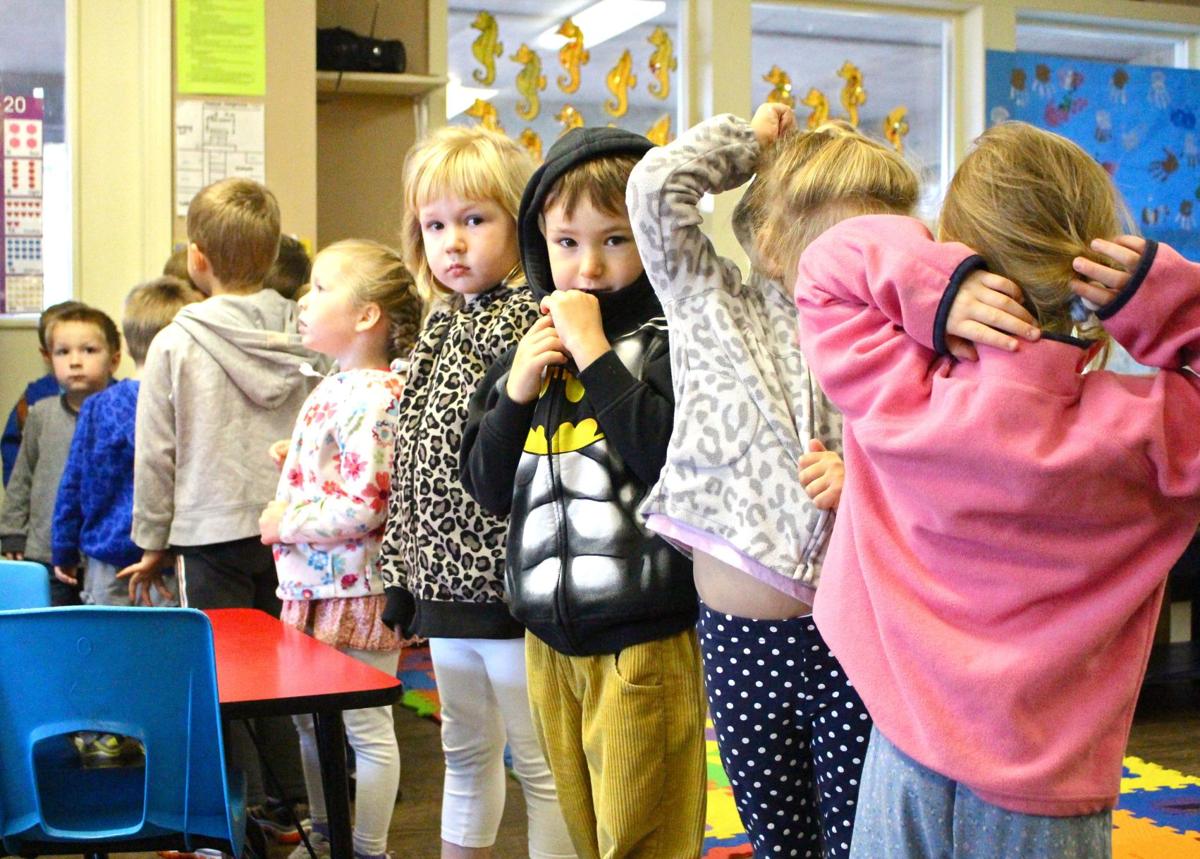 As the preschoolers line up to play outside, Eva Hill (center left), 4, and Hayden Niemeyer (center right), 4, become aware that they're being photographed. 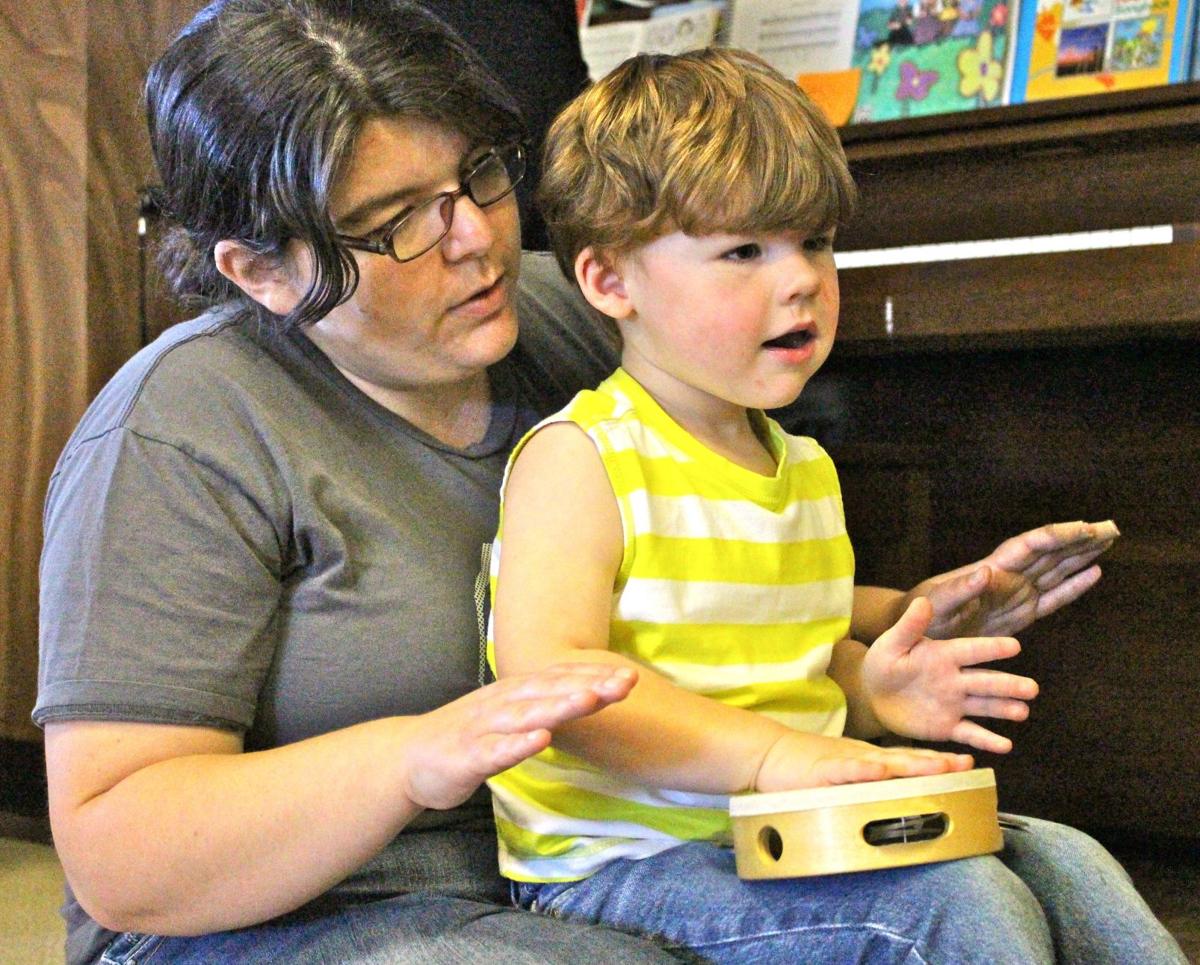 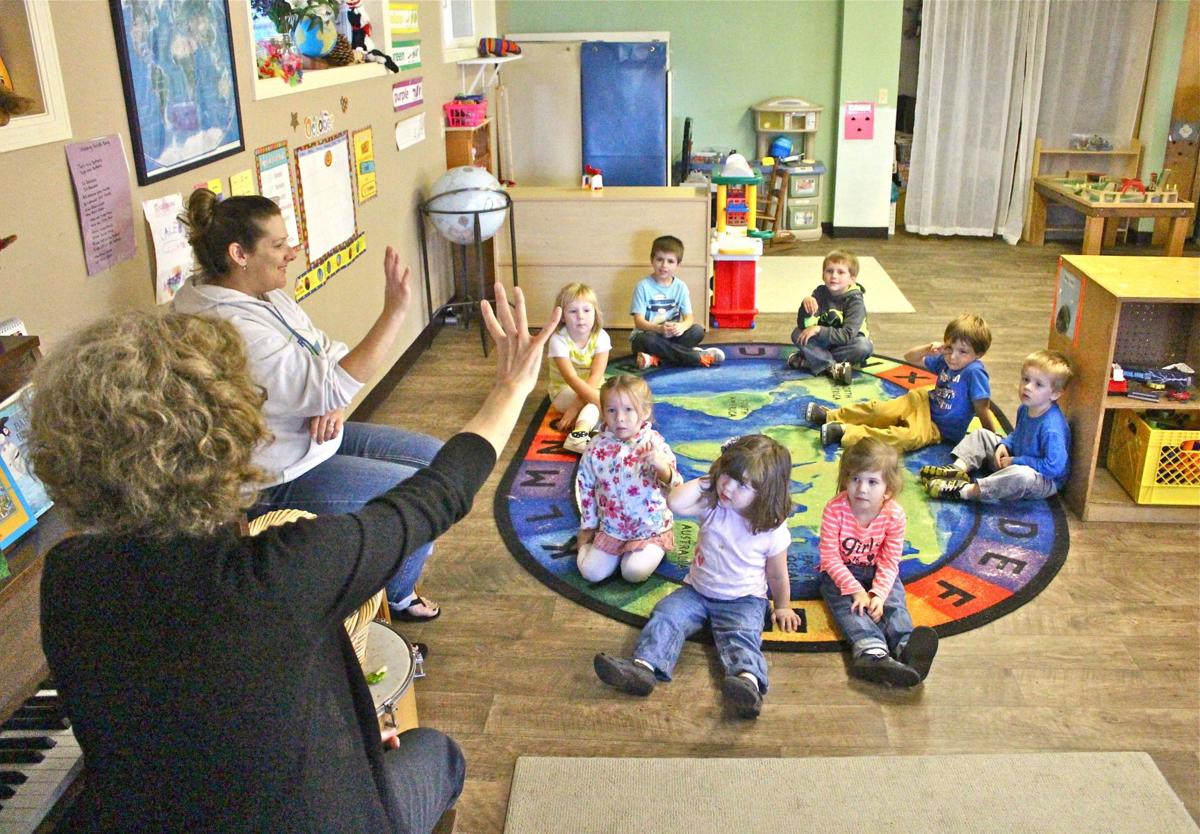 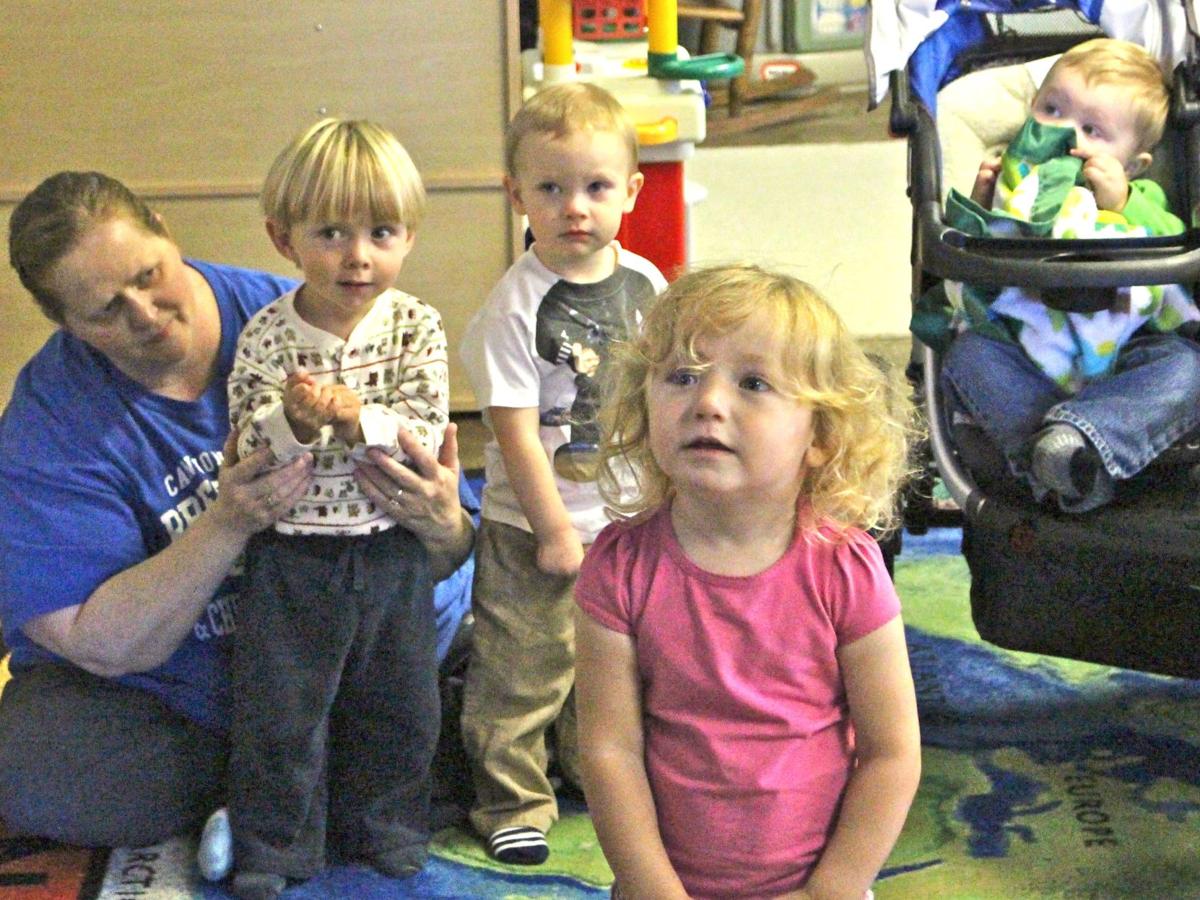 As the preschoolers line up to play outside, Eva Hill (center left), 4, and Hayden Niemeyer (center right), 4, become aware that they're being photographed.

It is a chilly autumn morning at the Cannon Beach Preschool & Children’s Center.

More than a dozen preschoolers, some pulling on their jackets, line up single file at a side door. Nearby, the infants and toddlers prepare for their weekly music time with music teacher Lorain Trzyna.

Just before their teachers usher them to the playground, Barb Knop, the center’s board president and a former school teacher, shows up. The preschoolers spy her from across the room and give her a rock star’s welcome.

Knop is not at the center every day, but even when the center is closed, the former accounting minor who once taught high school business classes puts in long hours taking care of the bookkeeping work, not to mention shopping for the center’s supplies and snacks.

For people who work with children, the greatest rewards are often the intangible kind.

“I get my reward when I walk in and they’re happy to see me,” she said.

The Cannon Beach Preschool & Children’s Center, a nonprofit founded in 1977, operates year-round and is the only state-certified day care center for infants (0- to 2-year-olds), toddlers (2- to 3-year-olds) and preschoolers (3- to 6-year-olds) in Cannon Beach.

Last week, the center hosted the inaugural “Race the Wave” 5K tsunami-themed fun run. Proceeds from the race, which attracted 80 runners, will go to the center; the amount has not yet been determined.

The center seeks to instill a love of learning through hands-on play: The kids don’t just listen to music, they pat a tambourine. They don’t just look at pictures in a storybook, they paint their own. They don’t just hear about the natural world, they plant flowers and check out the ocean life on the beach.

They learn to write their names and do beginning addition. They learn about safety and meet members of the police and fire departments.

Parents volunteer hours at the center and introduce the children to their area of expertise: For instance, a parent who works for U.S. Fish and Wildlife brought in baby chicks. Families from different cultures have held cooking classes.

And then there are all the daily opportunities to just play around.

The spirit can be infectious; when a child is playing house, “the teachers get in on that sometimes,” said Annette Campbell, director of the children’s center.

The idea is to give them a solid foundation — social and academic — for entering kindergarten at Seaside Heights Elementary School.

The center’s teaching staff, which serves 36 students, consists of a lead teacher and an assistant teacher for each age group. Families come from Cannon Beach, Seaside, Gearhart, Arch Cape, Nehalem and places out on U.S. Highway 26.

Many of the parents work in Cannon Beach but live in other cities where the cost of living is cheaper. Hotel and restaurant workers tend to fall into this category.

“There’s more demand for childcare than there is certified child care in this area,” Knop said. “It’s a tough business — tough but very important.”

Allison Whisenhunt, a board member and parent of a preschooler at the center, was once a social worker at a children’s hospital. She said she saw directly what can happen to children — namely, physical and sexual abuse — in some unlicensed child care situations.

To be sure, “there are a lot of people who do private care who are fantastic,” Campbell said.

But for Whisenhunt, being able to drop off her son, Jonathan, 4, at a place that she knows is “safe” and “transparent” — that has an “open-door policy” for parents — “means the world to me,” she said.

Nearly three years ago, the children’s center was in danger of closing, Knop said.

During the economic downturn, student enrollment decreased as some parents found themselves unemployed or underemployed. Because tuition is the center’s main revenue stream, covering about 40 percent of expenses, the center faced an existential crisis.

Knop, who became board president in April 2012, took over the financial management of the center and hired a development director to help with fundraising.

In March 2013, the center raised its tuition by 3 percent, a small enough increase so no families were priced out, Knop said.

“I feel really strongly about keeping tuition as affordable as possible,” Whisenhunt added, “not just because my child goes here, but I think it help provide access to early childhood education and experiences that some kids wouldn’t get otherwise.”

At any given time, the center staff is looking into grant funding and putting together grant proposals. Currently, the center is working with a $5,000 grant from the Oregon Community Foundation for the music program, art supplies and outdoor play equipment.

During the year, the center hosts several fundraisers and receives the proceeds from others.

With the “Race the Wave” behind them, the center has a couple months off from fundraising.

Its annual “pictures with Santa” fundraiser will be held Dec. 13 during Haystack Holidays. The next “Rock the Beach” fun run will be held this spring.

Knop said it was difficult for her to get behind the first Wine Walk, held in 2010, as a benefit for the children’s center; the idea of funding education by selling alcohol didn’t sit well with her. “But I soon realized you have to get over that,” she said.

In addition, donations come in from parents and community members. “The businesses in this area really support the children’s center,” she said.

The city of Cannon Beach, whose charter makes affordable child care a city goal, also sets aside a yearly amount for the center. The subsidy for fiscal year 2014-15 is $62,277.

“We’ve worked hard to get the center in a positive financial situation,” Knop said.

The long-term trajectory of the center, Knop said, is to relocate to the 58-acre South Wind property south of town, east of U.S. Highway 101 and above the tsunami inundation zone. It is one of several essential facilities — including City Hall and the city’s police and fire department — looking to retreat from the beach over time.

In the short term, the center’s board and staff members hope to expand their programs and educational offerings. Field trips to the Cannon Beach Library once a month are in discussion, Campbell said.

Asked why the children’s center is necessary for the community, Campbell, whose 4 year old, Jacob, is enrolled at the center, spoke for herself and for many of the parents.

“We all have to work, and we all have children, and we all want to make sure that our children are safe and happy and well taken care of,” she said. If the center wasn’t available, “I wouldn’t work.”

All jobs have their frustrations, Campbell said.

“But, as frustrated as I get some days,” she added, “there’s nowhere else that I could come to a job and have the satisfaction that I have of tiny little things happening: Somebody writes their name, or somebody gets a pile of blocks to stand up as tall as they wanted it to go without falling down and the look on their face.”

Whisenhunt said that her son is “getting so many experiences that I wouldn’t be able to provide, working and such. Not to mention he makes the cutest darn little pictures.”

On a recent night, Whisenhunt’s daughter, Alona, a second grader at Seaside Heights, was doing homework. So Jonathan, who has been learning to write his name at the children’s center, decided that he should do homework, too.

“We sat down with a marker and wrote his name, probably 20 times on this piece of paper,” she said. “Just filled it up.”