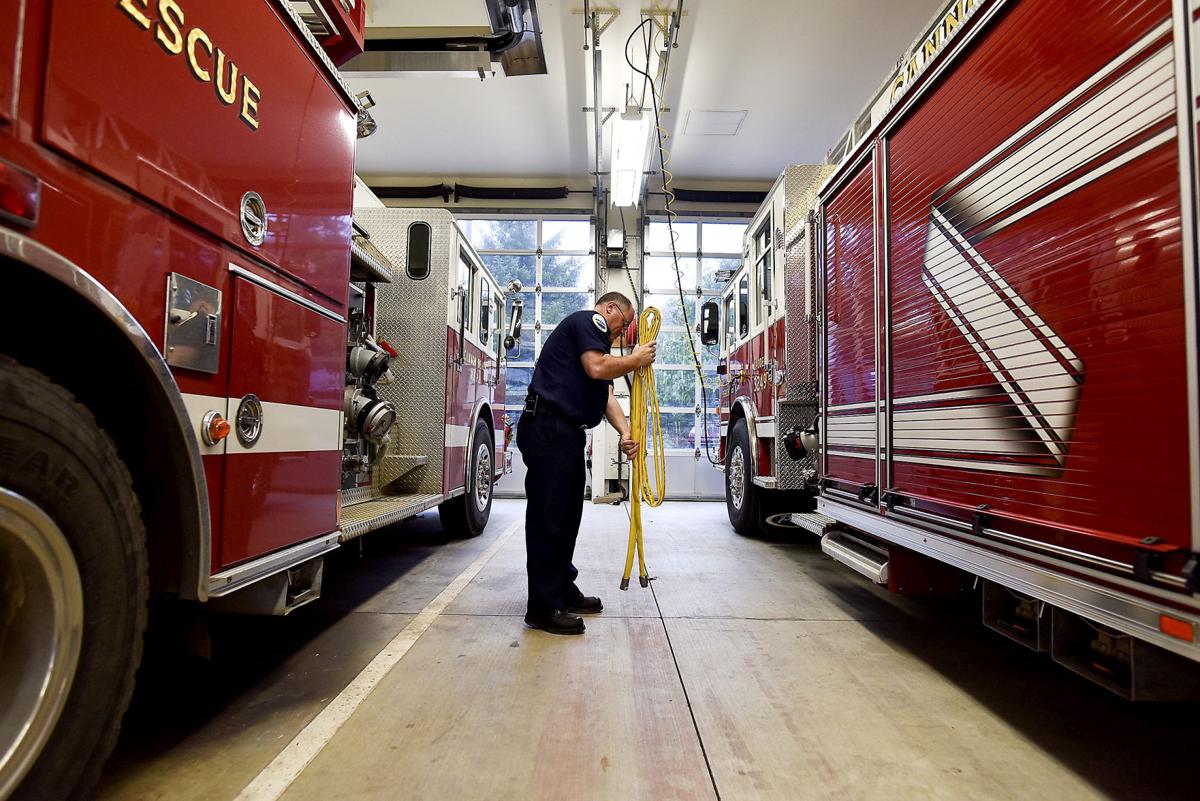 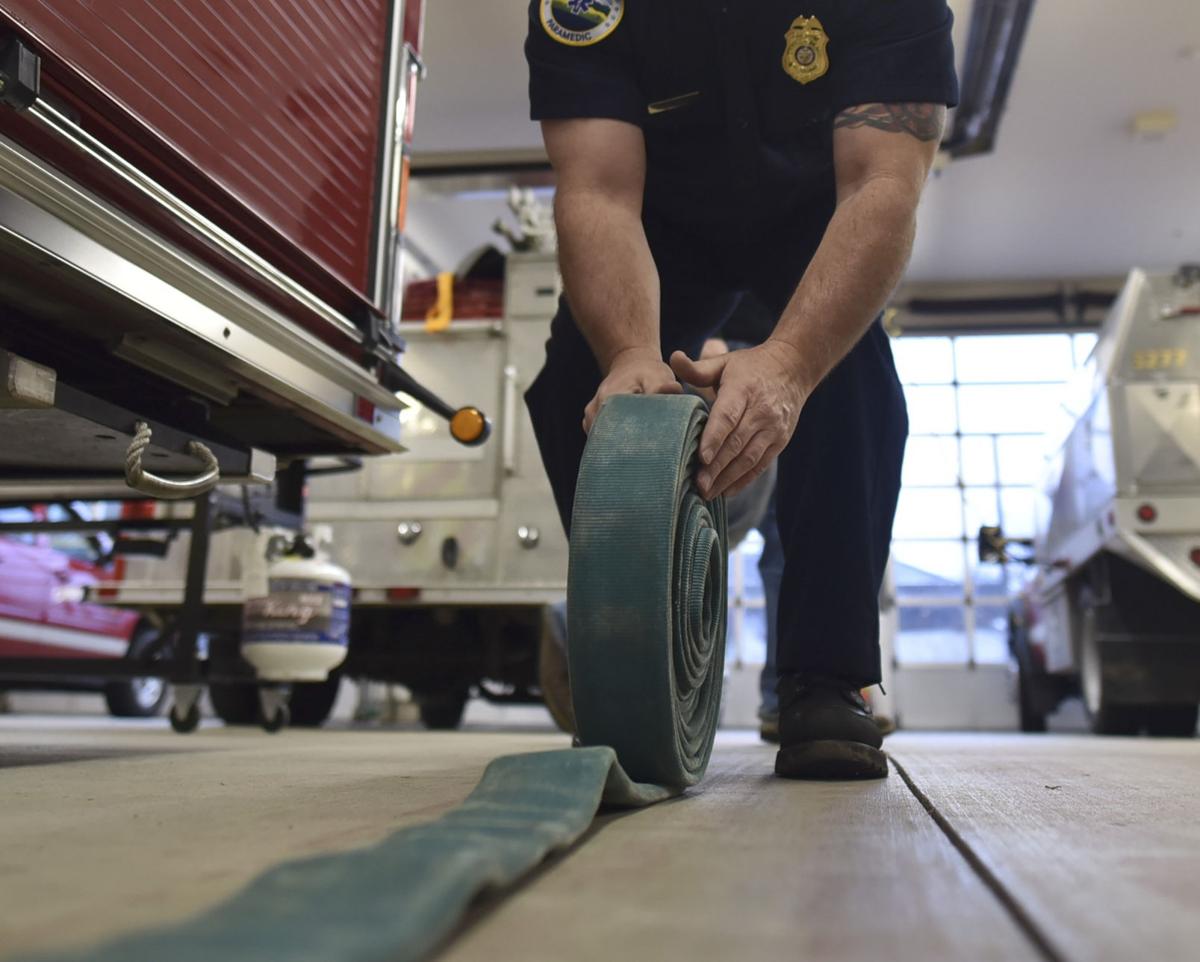 Rolling hose is just one of the many jobs personnel with Cannon Beach Fire and Rescue perform after a call. 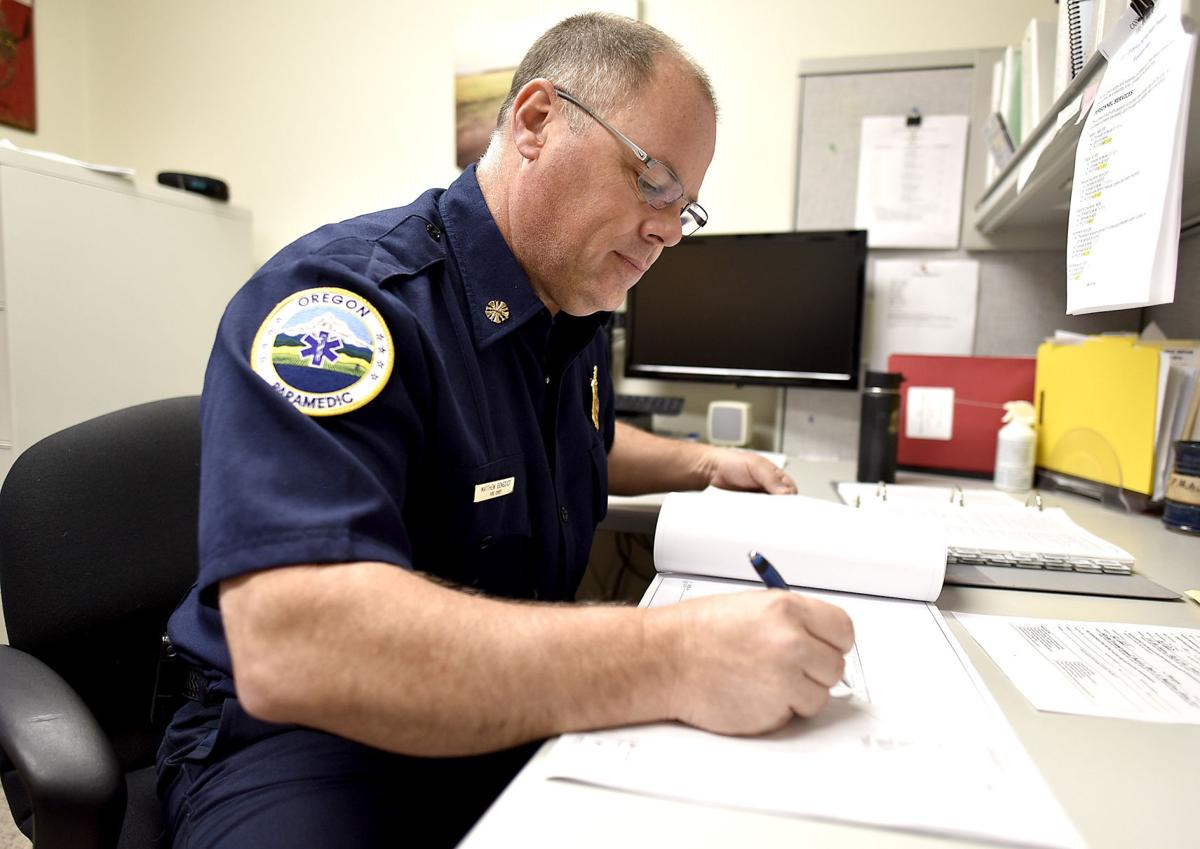 Cannon Beach Fire Chief Matt Benedict does paperwork in his office at the main station. 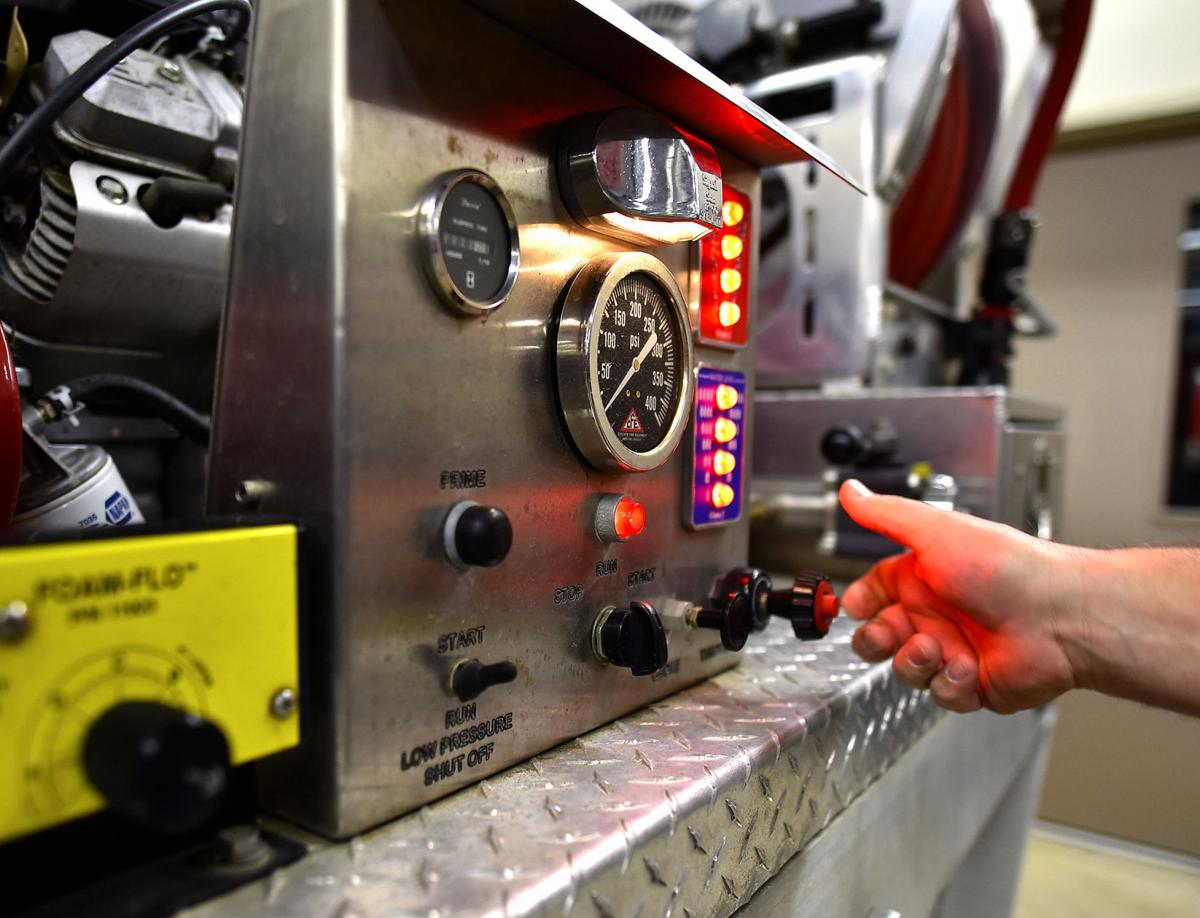 Checking equipment to ensure it is in working order is a daily task at Cannon Beach Fire and Rescue. 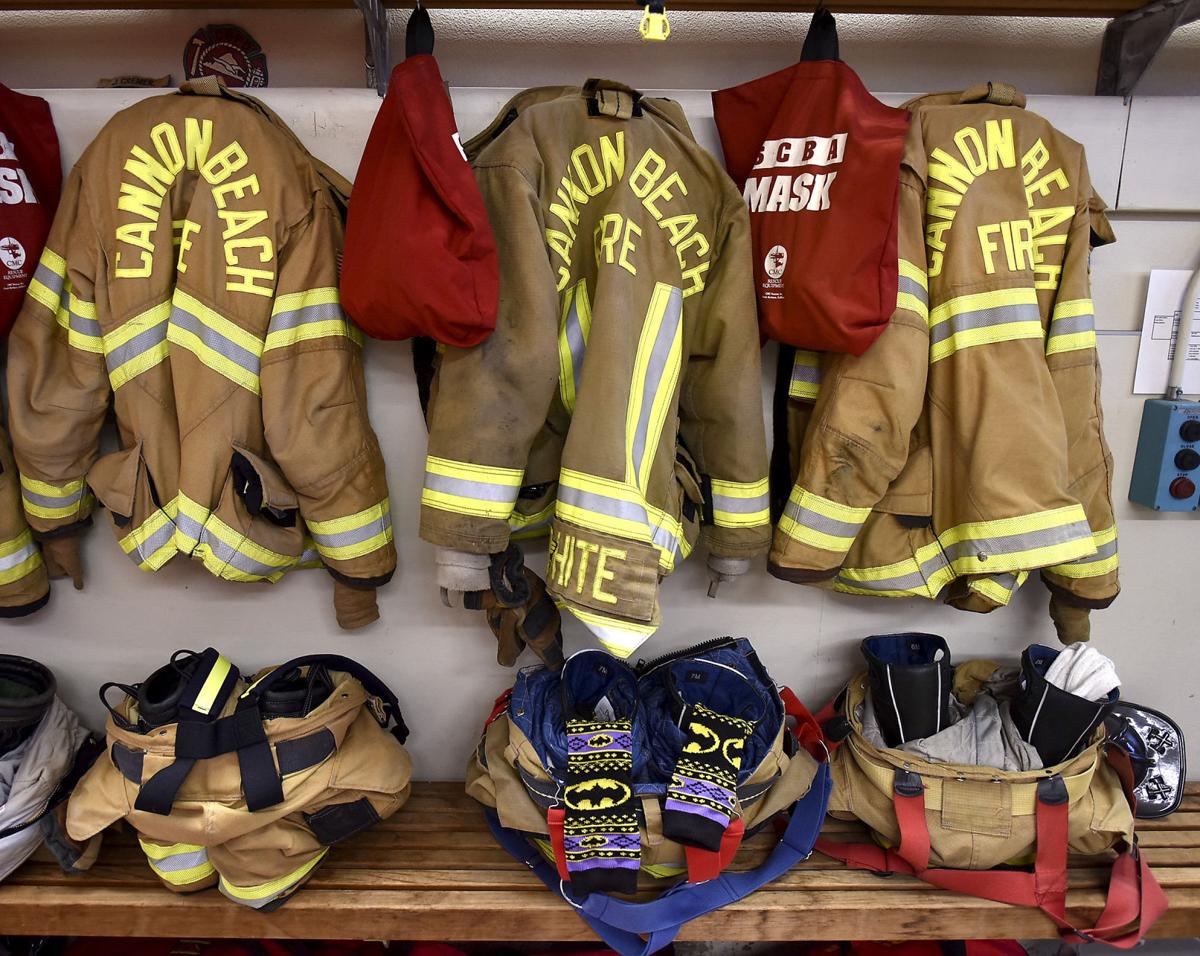 Firefighting gear hangs ready for the next emergency at Cannon Beach Fire and Rescue.

Rolling hose is just one of the many jobs personnel with Cannon Beach Fire and Rescue perform after a call.

Cannon Beach Fire Chief Matt Benedict does paperwork in his office at the main station.

Checking equipment to ensure it is in working order is a daily task at Cannon Beach Fire and Rescue.

Firefighting gear hangs ready for the next emergency at Cannon Beach Fire and Rescue.

Every five years, Cannon Beach voters are given the choice on a levy that pays the salary, benefits, training and other expenses for a full-time fire chief.

Last year, the fire district applied for two Federal Emergency Management Agency grants to fill the two firefighter paramedic positions, but did not receive the award due to reporting errors made by previous administrations. While the district plans to apply for the two grants again, funding the positions through a levy would be more reliable, Benedict said.

“With the grant process we cannot rely on the funding in the future,” he said. “The levy would be more permanent as it would be for five years and hopefully supported by the voters to continue in the future.”

If the board approves, one firefighter position would also be in charge of recruitment and retention, while the other would take on fire inspections.

“We can survive right now, but with more and more tourists coming in, we need more extra personnel,” Benedict said.

Part of what is driving the need, Benedict said, is the growing number of medical calls. The fire chief estimates 80 percent of the 380 calls Cannon Beach Fire and Rescue responds to each year are medical.

The majority of emergency service calls come from north Clatsop County, so in Cannon Beach it is not uncommon for an ambulance to take 15 to 40 minutes to arrive, Benedict said. In one case, he recalls waiting 45 minutes before an ambulance could treat someone with dangerously low blood pressure.

Medix Operational Manager Duane Mullins said there is always at least one ambulance stationed in Seaside and Astoria. While he considers response times over 10 minutes to be the minority, the reality is the farther calls are from those nodes the longer the response time.

“Someone living in Elsie is not going to get the same response than someone in Seaside living across the street from McDonald’s,” Mullins said. “I think trying to add a couple more people is smart. Fire departments don’t respond to fires anymore; they respond to medical calls.”

But with Benedict as the only paramedic on staff and volunteer firefighters having varying degrees of emergency medical technician certifications, this can leave first responders without advanced life support for minutes in a field where seconds count.

“Bringing on two firefighter paramedics on alternating 12-hour shifts would mean we could have someone with the right skills respond no matter what,” Benedict said. “You just can’t predict when you are going to be responding to these kinds of calls.”

Like many fire departments across the country, recruiting and retaining volunteers is a challenge. The number of volunteers has been slowly declining over a number of years, from about 30 to 18 who respond on a regular basis. It’s a problem reflected in Cannon Beach’s citizen survey, where positive ratings for fire services dropped by 5 percent from last year.

Benedict attributes volunteer retention issues to the heightened training required by the state that can demand more time. The lack of affordable housing in Cannon Beach also makes it hard to find volunteers who can afford to live in the district they serve.

To address the challenges, the recruitment and retention specialist would figure out what resources are available to solve the problem. The specialist would explore different community partnerships in the hopes of expanding the program.

With residents juggling the bond passed in 2016 to pay for the new Seaside school campus, as well as a levy to pay for a firetruck, Benedict said he is exploring other funding options to limit the cost to taxpayers.

The fire district is also discussing whether to ask the city to raise the lodging tax as supplemental funding.

“A majority of our responses are for individuals that do not pay property tax and are from out of town,” Benedict said.

If the board doesn’t support the higher levy, the original fire chief levy, which would just pay for the chief’s salary and expenses, would be back on the ballot. It’s enough to operate with for now, Benedict said. But eventually, he believes these needs will have to be addressed.