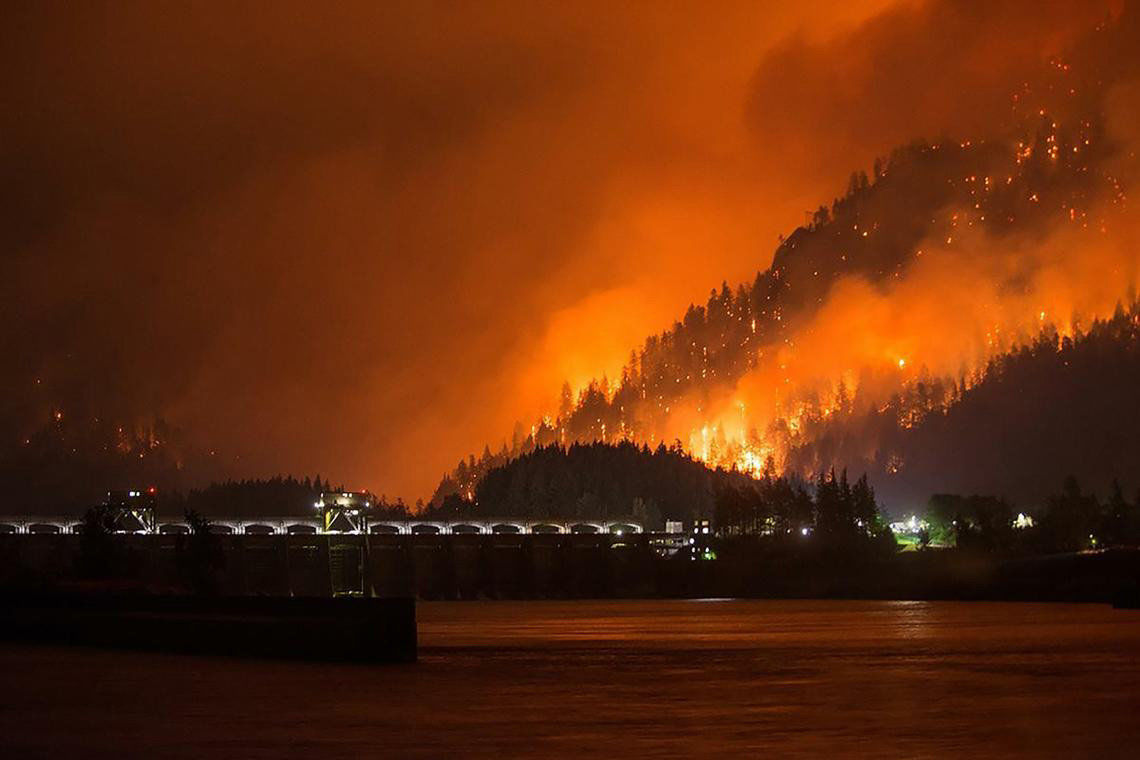 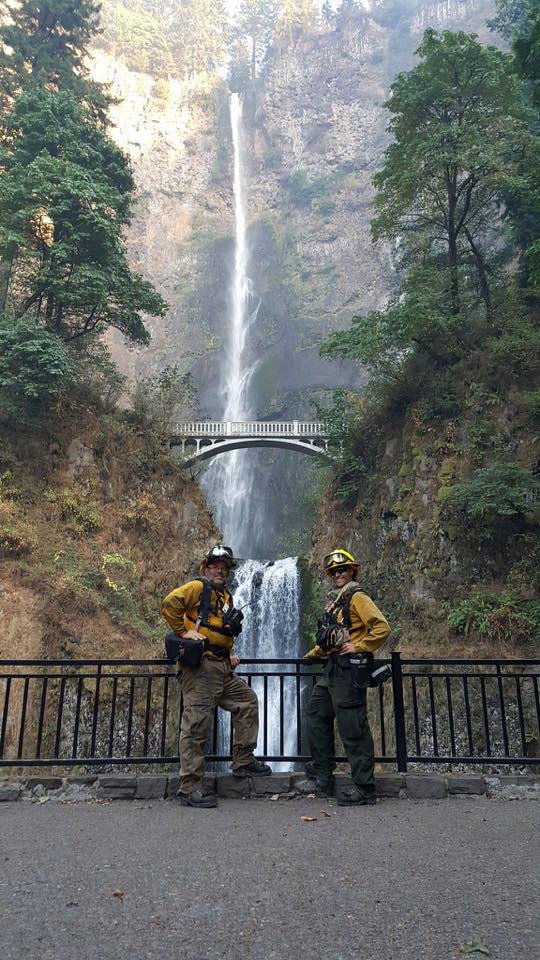 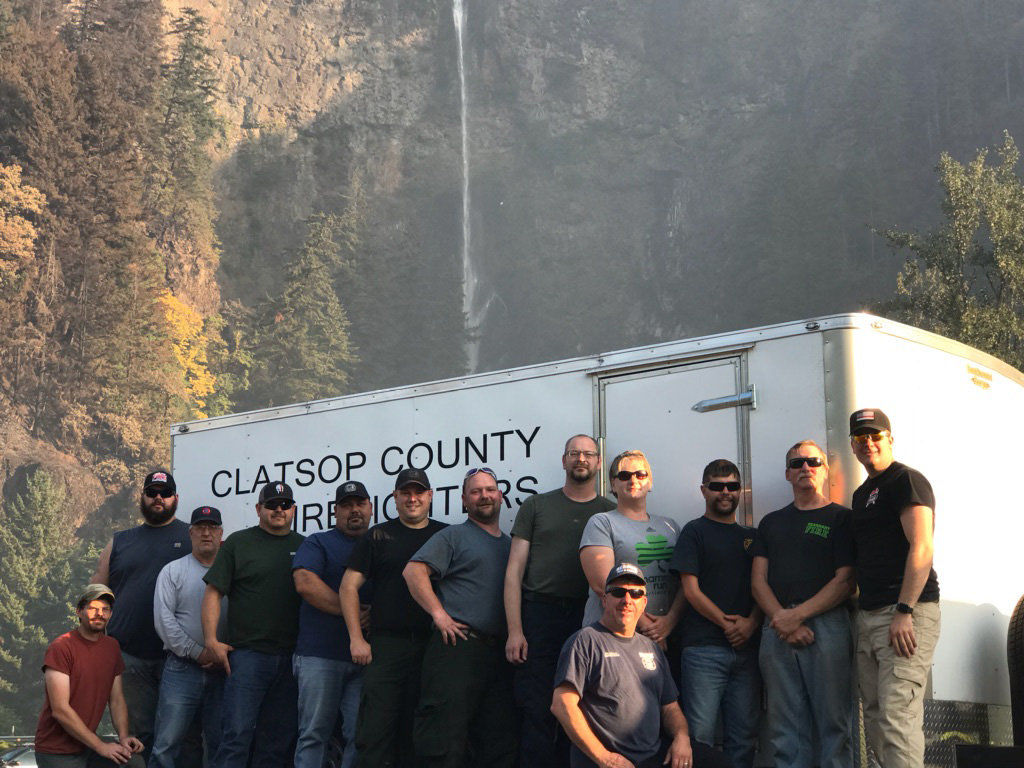 Cannon Beach Fire Chief Matt Benedict has been called to fight many wildfires over his 20-year career, so getting the call from the state to go to Sisters and Eagle Creek for two weeks didn’t feel much different.

But when he found himself at Multnomah Falls, memories of a fire that raged in 1991 were rekindled. He was a student in fire science at the time, and recalled protecting the historic lodge for two days straight with his classmates and mentor.

“I just remember thinking, ‘Wow, this all over again,’” Benedict said.

The fire chief was among the more than 50 Clatsop County firefighters who were deployed with Oregon State Fire Marshal Incident Management to the Milli Fire in Sisters, the Chetco Bar Fire in Brookings and the Eagle Creek Fire in Multnomah County throughout late August and early September.

As of Tuesday, a team of 13 firefighters at the Milli Fire in Sisters, another team of 14 at the Chetco Fire near Brookings and two teams of 13 and 14 in Eagle Creek have all returned home. It was the first time in Clatsop County history two task forces were sent simultaneously to fight fires around the state, Knappa Fire Chief Paul Olheiser said.

The team deployed to Chetco Bar broke state history for the most days spent on a fire as a part of a conflagration order from the state.

Olheiser, who is coordinating the county’s volunteer effort, said firefighters from Seaside, Gearhart, Olney, Lewis and Clark, Cannon Beach, Warrenton and Knappa fire districts were dispatched to fires throughout the state. As of midweek, more than 20 wildfires are burning throughout Oregon.

Many of the firefighters served on multiple task forces — some even back to back, not even making it back into their own homes for more than a few hours.

This year it was unusual to deploy four task forces in one summer for out-of-town fires, Olheiser said. Before this summer, the next most active summer was in 2015 with two task forces, and just occasional deployments every few years before then.

“Without dedication from the community, we could never do these things. It’s a hard hit to a small business if you lose two or three employees for weeks,” Olheiser said.

Olheiser said the number of firefighters sent and from which fire department is based on availability of personnel and resources.

“When the state gives a resource order, you go down the list of what the state is asking for and see who has it,” he said. “Starting with Milli Fire, I was getting daily updates from departments of who was available and what was available.”

Lt. Josh Como, with the Gearhart Volunteer Fire Department, had just gotten back from a family vacation when he got the late-night call to fight the Chetco Bar Fire. He’s been with the department 11 years, he said, but being called out to a fire out of town and of this size was a first.

“I got the call at 11:14 p.m., and by 3 a.m. we were on the road to Brookings,” Como said. “I think it first set in what we were doing when the sun started coming up over I-5, a couple of hours in. If you weren’t ready — it was too late. You have to try picturing yourself there.”

Days were long — often starting at 5 a.m. and ending at midnight — and the number of tasks to complete plentiful. But between moments of exhaustion, Como said, were feelings of excitement.

Como was in charge of a truck designed for fighting brush fires. He and the other volunteers were in charge of trimming back foliage close to houses that could catch on fire and turning on sprinkler systems as preventative measures. The team would also help protect livestock and watch for spot fires.

“Being in a fire is a finely-tuned machine,” Como said. “If you look at the big picture, it seems like it will never get done. But when you break it down into parts, it’s like a lawnmower: there’s a blade that cuts the grass and shaft that connects to the engine — each thing plays it’s own little part in making it work.”

“Maybe we were just a team of 13 people out of 1,800, but if we weren’t there to protect those homes then that job wouldn’t have gotten done.”

Often people envision dramatic battles between firefighter and flame. But, sometimes, the job of a firefighter is not only to put out the fire, but just to put people at ease, Benedict said.

“We were cutting weeds around one family’s house who were on Level 1 evacuation, which just means be prepared if you need to go, and they were visibly scared,” Benedict said. “So we showed the kids around the truck, showed them what we do with the sprinklers. It gives us an opportunity to talk to people to bring them down from that fear and help them know what they can do in the future to be safe.”