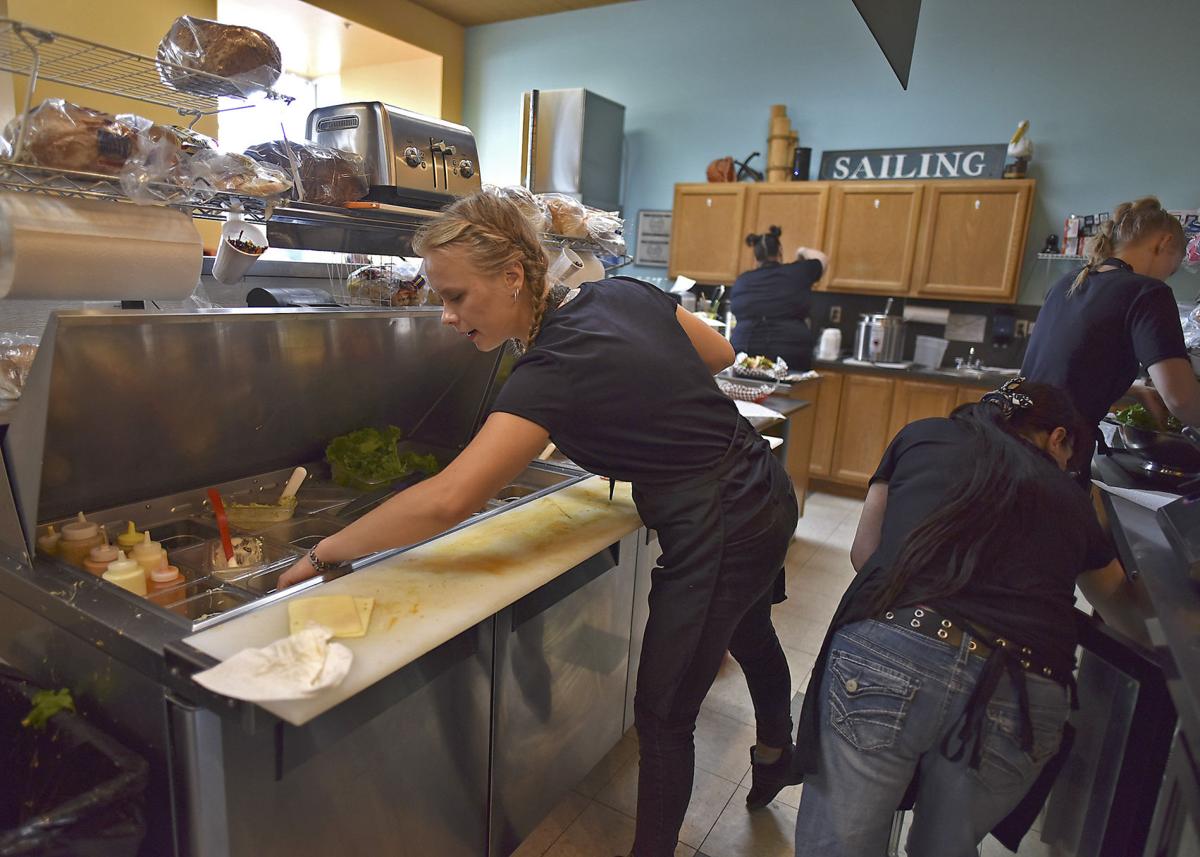 Employees at Tsunami Sandwich Co. in Seaside handle a rush of customers. 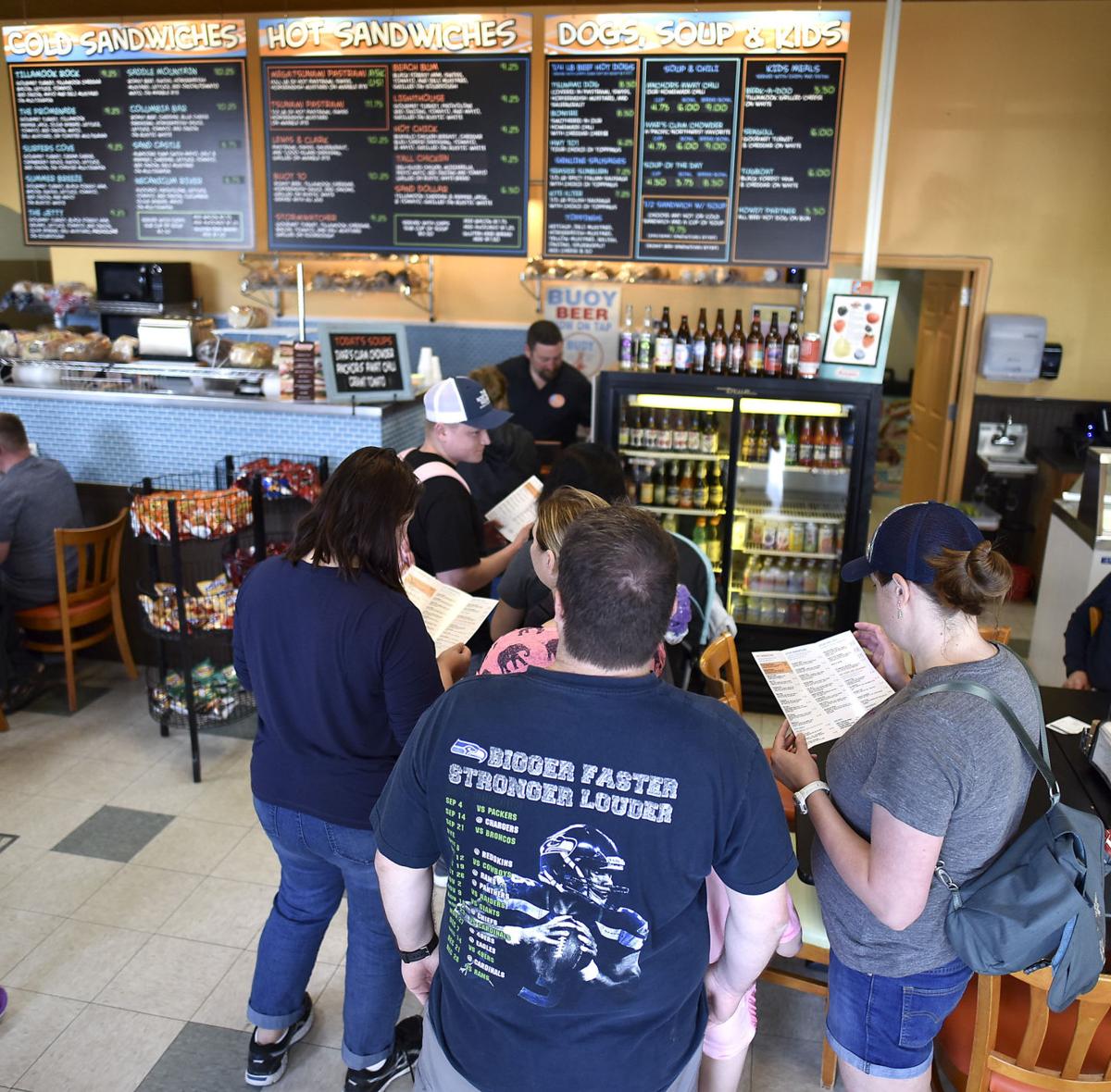 A line of people wait to place an order at Tsunami Sandwich Co. in Seaside.

Employees at Tsunami Sandwich Co. in Seaside handle a rush of customers.

A line of people wait to place an order at Tsunami Sandwich Co. in Seaside.

With the height of tourism season approaching, many in the restaurant and lodging industry will face throngs of visitors with incomplete crews.

The worker shortage on the North Coast is a consistent but growing problem. With Clatsop County’s unemployment rate hovering around 4 percent, employers across all sectors are struggling to find workers.

Perhaps where it is most noticeable, however, is at cafes and hotels. Job vacancies in leisure and hospitality have increased by 232 percent across northwestern Oregon, from 416 jobs in 2016 to more than 1,000 in 2017, according to a survey by the Oregon Employment Department.

More than half of the open positions in 2017 were full time, and more than 60 percent were permanent jobs. Average wages grew from 2016 to 2017 by more than 11 percent in hospitality to $12.35 an hour — over $2 more than Oregon’s standard minimum wage.

So why are there so many help wanted signs in the windows?

Lack of affordable housing is by far the most commonly cited reason for the worker shortage.

“I probably have one to five businesses a week talk to me about this,” said Brian Owen, executive director of the Seaside Chamber of Commerce. “We’re a tourist town with a base of service workers. But without a decent place to live, they will move on where they feel comfortable. Sure, we are one of the most wonderful places, but without a place to stay, workers will move on.”

In Seaside, Owen has seen more and more business reduce operating hours or days in response to not enough staff to cover shifts. While the effects are largely seen in small mom-and-pop shops, the phenomenon has even closed national chains like Taco Time down to only five days a week.

“It has made business decisions for business owners,” he said.

At Pelican Brewing in Cannon Beach, lack of affordable housing has led CEO Jim Prinzing to invest more in local real estate to house his workers. Pelican Brewing operates seven apartment units on site and a house in Manzanita for its employees. Even with housing, the brewery operates at 10 to 15 percent below capacity at peak season, Prinzing said.

“There are people who want to come and work for us who just have no place to live,” Prinzing said. “We’d continue to offer benefits to full-time employees and competitive wages to make the job worth their while. But I don’t think we’d be paying for housing.”

Another struggle is finding qualified employees. In 2017, 50 percent of job vacancies required previous experience. In a county with only 742 people listed as unemployed, finding talent in a small pool can be tough.

“Most who want to be working are working,” Sykes said.

Lisa Kinsley, the general manager in human resources at McMenamins, experienced this firsthand when the company sought to fill eight new housekeeping positions for an expansion project in Gearhart.

They managed to do it, but only through intense networking and by raising pay a few dollars an hour.

“The Oregon Coast has a lot of hotels, so there’s a lot of competition for housekeeping staff,” Kinsley said.

The hotel and restaurant chain has struggled the most with finding qualified kitchen staff — jobs the state has identified as some of the toughest to fill. McMenamins has 20 vacancies, mostly related to kitchen operations, before being at capacity for a typical summer rush.

With lack of affordable housing keeping new talent away, that leaves many in the hospitality industry to compete for a limited pool of experienced staff already on the North Coast, Kinsley said.

That’s part of the reason David Posalski, the owner of Tsunami Sandwich Co. in Seaside, turned to employing foreign exchange students on work-study visas six years ago. Another issue is that fewer local high school students are seeking summer jobs, and those who do want to work fewer hours.

Posalski tried offering flexible schedules and end-of-summer bonuses to keep local kids on, but ultimately would find many weren’t willing to work the number of hours he needed to operate, he said.

Students on the work-study visas, however, are here to work, Posalski said.

“When you interview them, the first question they ask is ‘How many hours can I work?’” he said. “These kids, from Bulgaria and Lithuania, they want to work 60 to 70 hours a week. Because here, you can work for a summer and make a year’s worth of income back home.”

When the summer crowds hit, local businesses say they will be ready to serve — with or without vacancies.

But readiness will come at a cost. If 20 positions at McMenamins aren’t filled, the company will have to continue paying for wages, travel and hotel expenses for staff they bring in from Portland to fill shifts.

“You get creative. You make it work,” he said. “You get to the point where you can make it through the day, but you can’t do those extra things.”

For now, businesses are making it work. But if problems persist, there could be a breaking point.

“We are fortunate enough to have three locations. We’re diversified. If we were one standalone restaurant it would be exceptionally challenging to handle housing,” Prinzing said. “It makes you think seriously about whether it’s worth expanding on the coast. That’s probably the most significant impact of all this.”