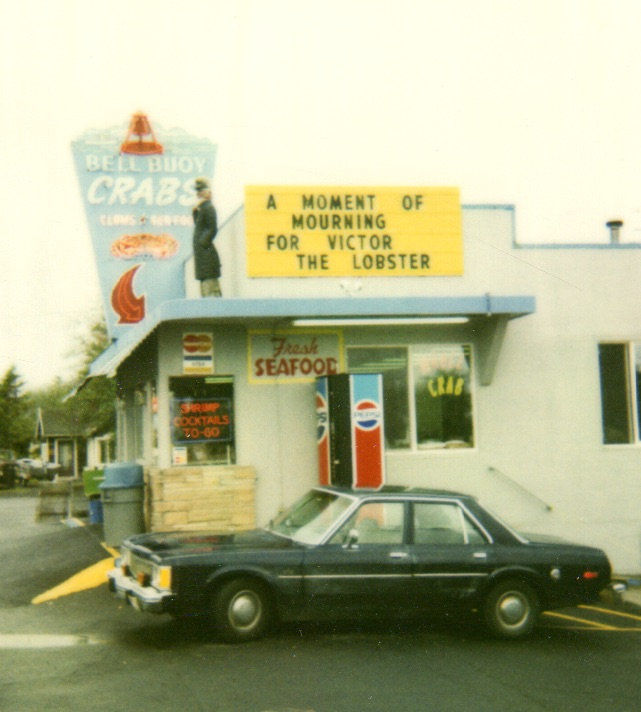 After the death of Victor the lobster in Sept. 1994, Bell Buoy in Seaside displayed its moment of mourning sign to passersby. 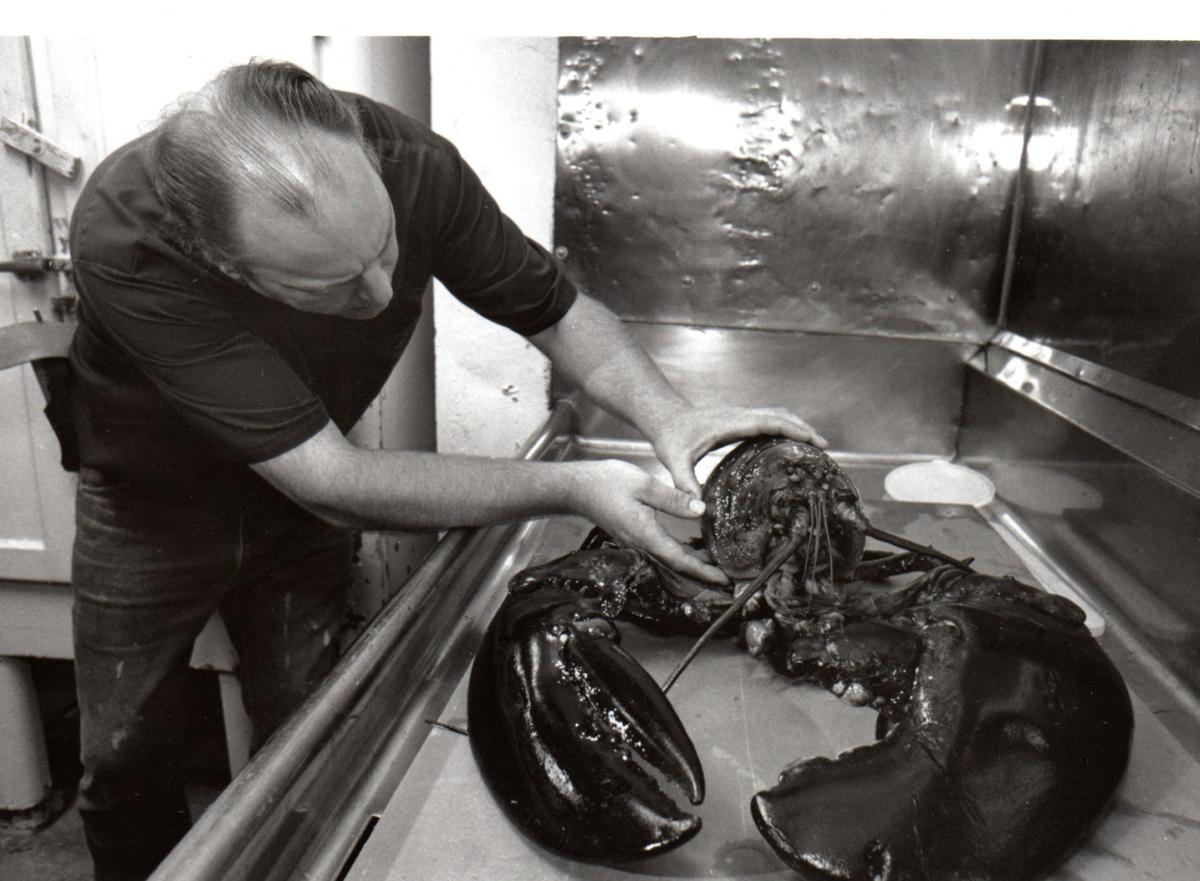 Tom Thies exams Victor the lobster after it was stolen and dropped by a hungry thief in Sept. 1994.

After the death of Victor the lobster in Sept. 1994, Bell Buoy in Seaside displayed its moment of mourning sign to passersby.

Tom Thies exams Victor the lobster after it was stolen and dropped by a hungry thief in Sept. 1994.

It was early in 1993 when the Seaside Aquarium became the new owners of one very large lobster. The lobster originally was caught off the coast of Maine by commercial fishermen for Safeway and had been placed in the holding tank ready to be sold. However, it was a large lobster and, as any lobster devotee knows, lobsters are sold by the pound.

At April’s History and Hops lecture presented by the Seaside Museum and Historical Society at Seaside Brewing Co., Keith Chandler, general manager of the Seaside Aquarium, recalled the story of the much-admired lobster named Victor.

Safeway store manager at the time Vickie Forney removed the lobster from the confines of the tank and donated it to the aquarium. Chandler said they held a name-the-lobster contest and Victor as in “victory over death” suggested by a local nun was chosen. “She was a nun and I wasn’t going to go against the church,” Chandler quipped, adding the name was also to honor Forney who was kind enough to rescue Victor from the tank and an ignoble death.

At the aquarium, Victor was placed in a shallow tank for all to admire. Much like many firsts for the aquarium, Victor became headline news. It was Sunday, Sept. 4, 1994, of Labor Day weekend, Chandler recalled, and Becky Bierly was taking tickets when she noticed a man walking out with Victor under his arm. Frantically, Bierly called Chandler who, with a baseball bat in hand, gave chase.

Chandler spotted the thief with Victor under his arm running down the Prom. Chandler is in quick pursuit and eventually confronts the man who drops the lobster and retreats. Though it appeared to be in good shape, Victor landed on a curb and had cracked his shell. Unfortunately, there was no happy ending for Victor the lobster. He died four days later, succumbing to internal injuries.

Police found Terry Lutz, 35, of Estacada and arrested him on a theft charge. The case was handed over to a newly sworn-in Clatsop County District Attorney Josh Marquis. One of Marquis’ passions is animal rights, Marquis said in a recent phone conversation. Unfortunately, animal rights laws in the ’90s were not what they are now, Marquis pointed out.

“I couldn’t get (Lutz) him for cruelty to animals because you can boil lobster when they’re alive,” Marquis explained.

Victor was a lobster that’s only worth so much per pound according to the law, he said. No one knew how to care for a lobster “that the law considers a giant insect.”

No local veterinarian was trained in treating lobsters, he added.

The best Marquis could do was to charge Lutz with theft II, a misdemeanor. Lutz pleaded guilty to second-degree theft, received 18 months of probation, ordered to perform 120 hours of community service, and pay $800 to the aquarium.

Lobsters are known to live over 120 years, Chandler said. At the time of Victor’s death, he weighed 28 pounds and was estimated to be 80 years old.

When asked why Lutz stole the lobster, Marquis answered, “He was hungry.”

Marquis said he is not a vegetarian and enjoys eating lobster, but, as he continued, “anyone knows you don’t want to eat a lobster that old.”

The news about the abduction, capture and death of Victor the lobster traveled worldwide. “It was staggering that the news traveled all the way to Australia,” Marquis said. “It’s hilarious. It was so bizarre that this has gotten more publicity than any other case I worked on.”

True, the news went global. Paul Harvey, a well-known radio broadcaster reported the theft to his audiences. Marquis received a call from Susan Orlean, a writer for The New Yorker, to fact check the story. Orlean mentions the case in a 2002 article titled, “The Lady and the Tigers” as well as in her book, “My Kind of Place.” There’s also a paragraph mentioned in “The Mammoth Book of Weird News.”

As for Terry Lutz, more trouble followed. It seems he has a long history of violence and a very long criminal record. Before the abduction of Victor, Lutz was convicted of animal abuse in 1988 when he shot an officer’s canine partner. He received jail time in 1982 for child neglect, and in 1996, Lutz received 30 years for attempted murder, and is currently in Snake River prison until 2022.

Victor is fondly remembered. After his death, Victor was sent to Kent Israel Taxidermy and is on full display inside a closed case for all to, once again, admire.