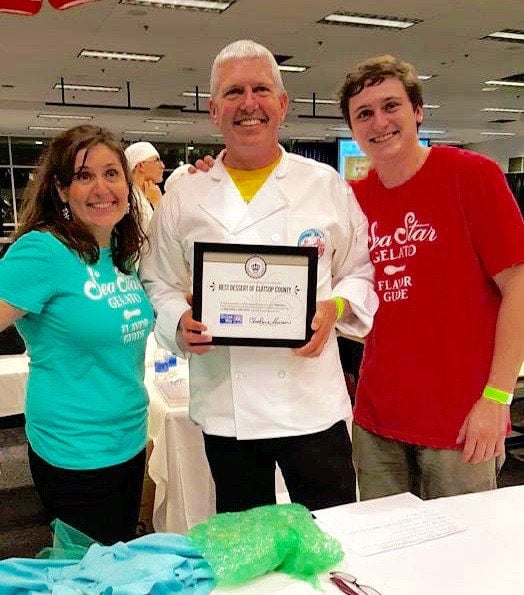 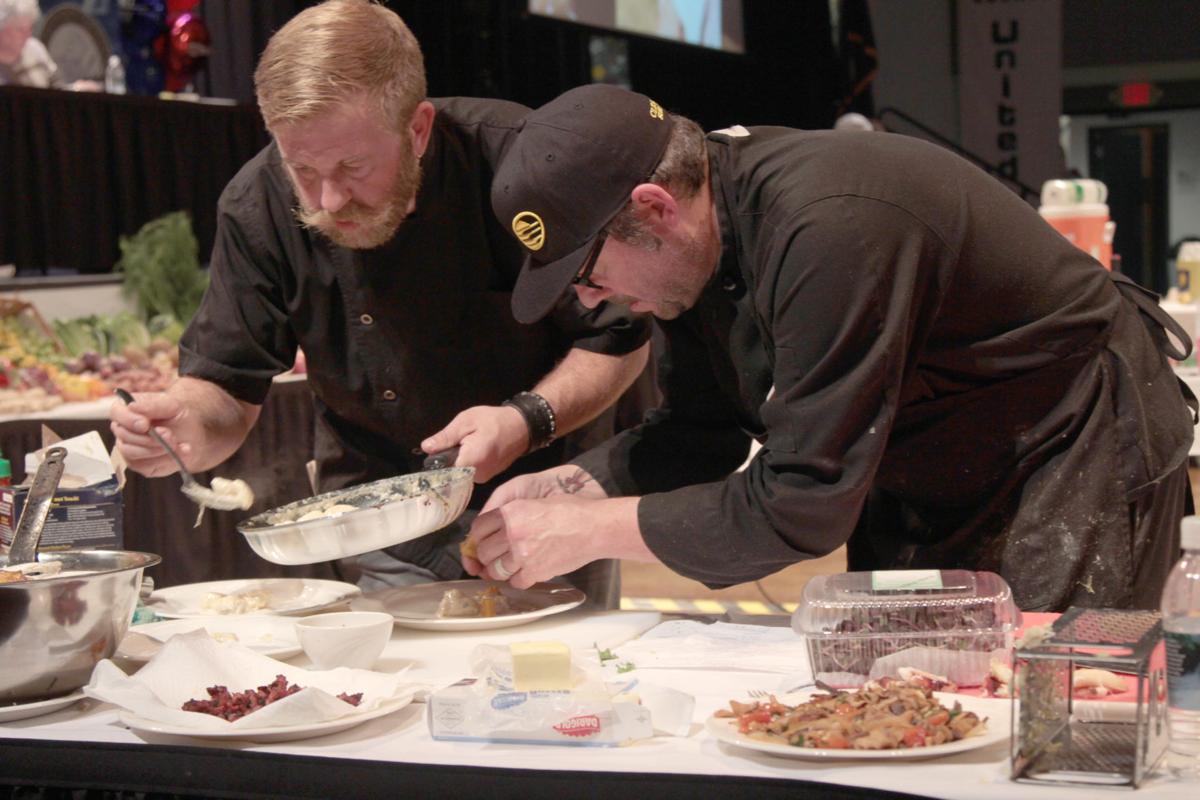 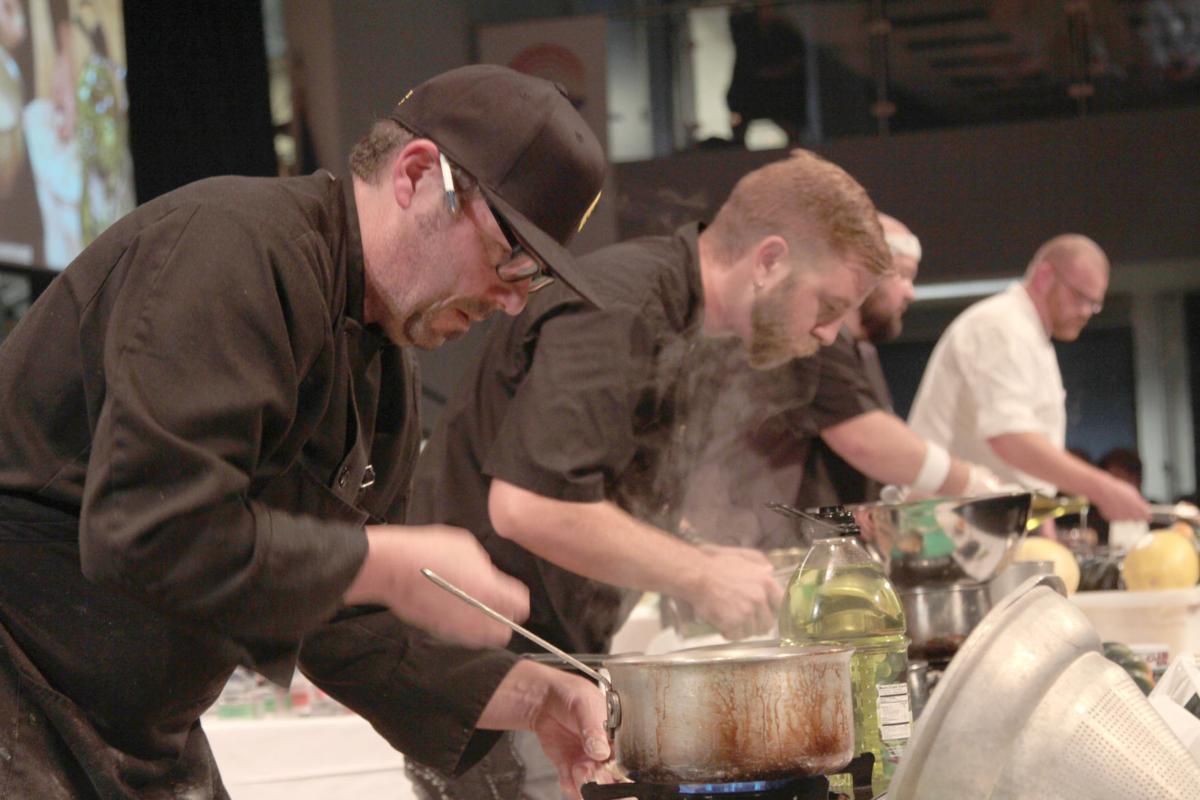 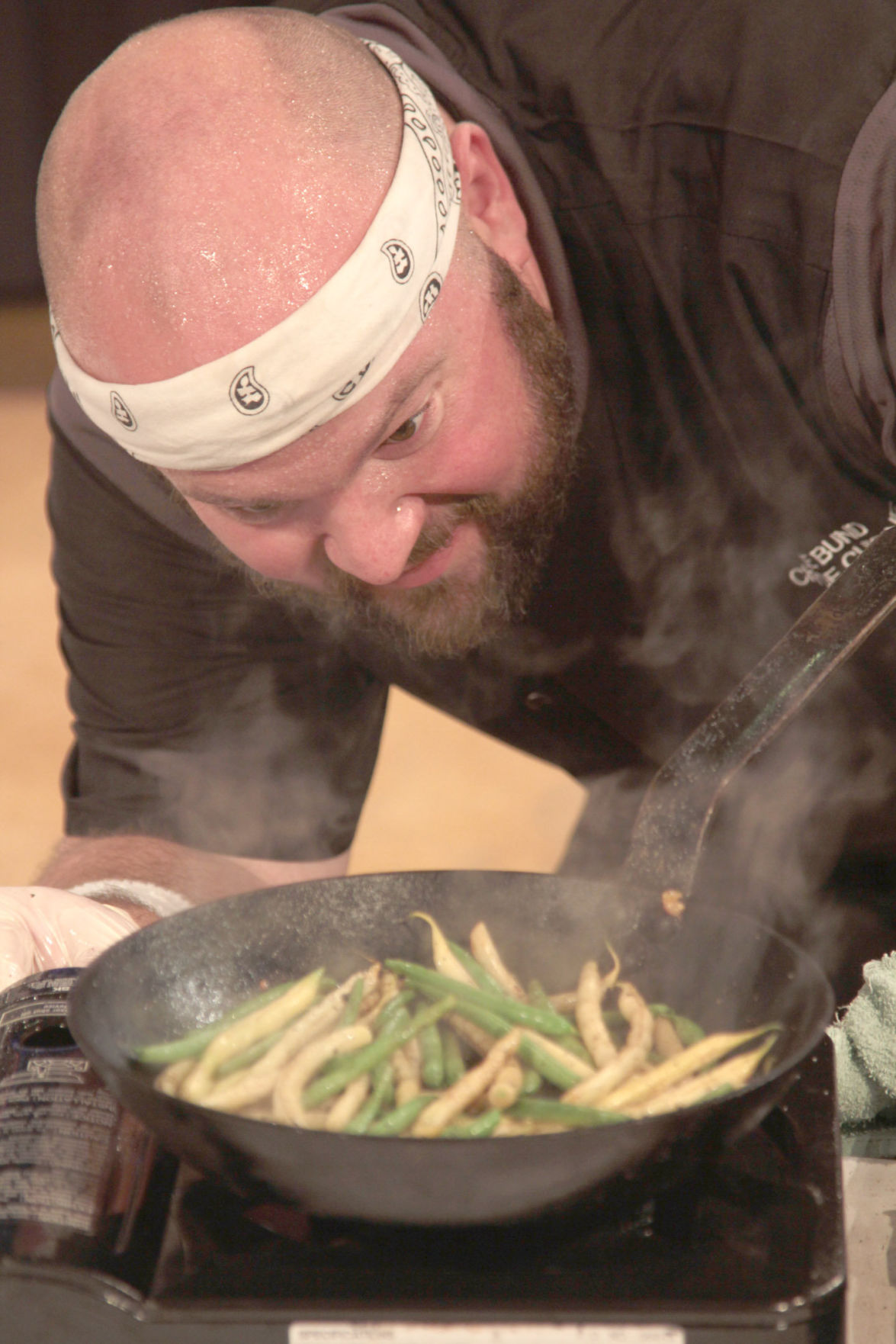 Abe Bund of Newmans at 988 works his dishes at Iron Chef Goes Coastal. 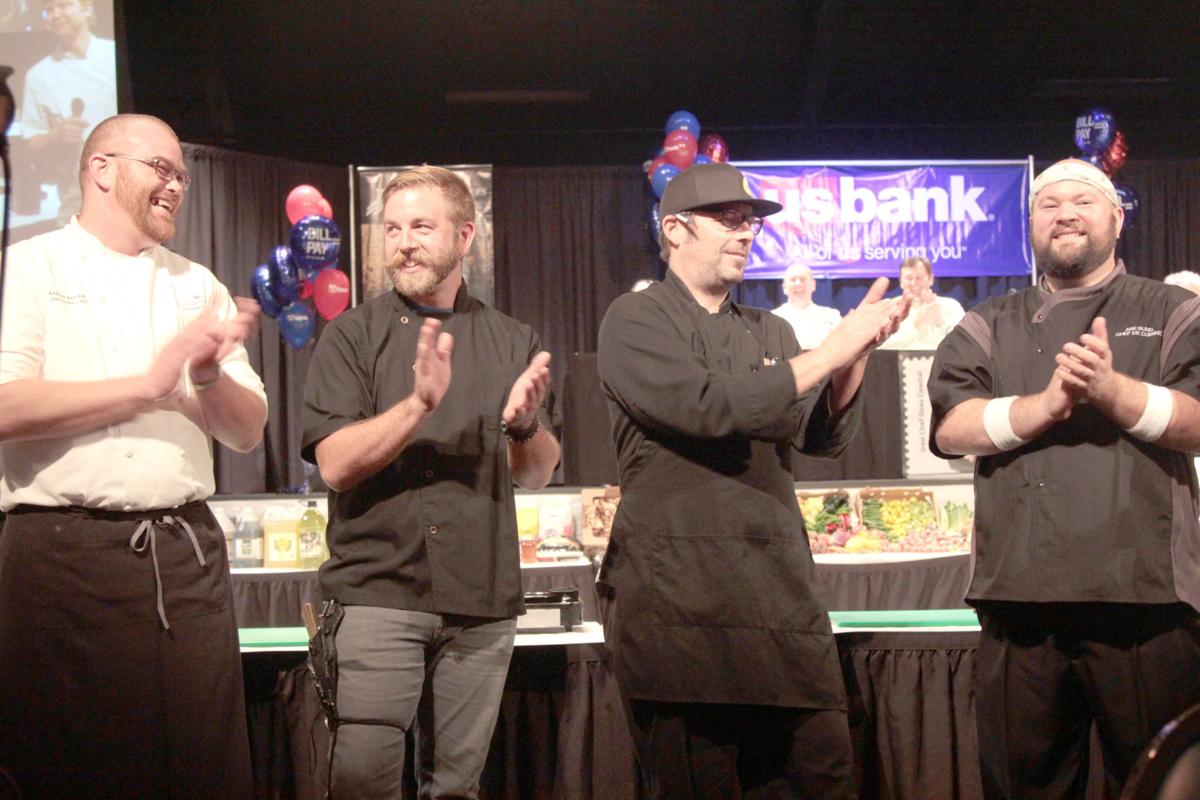 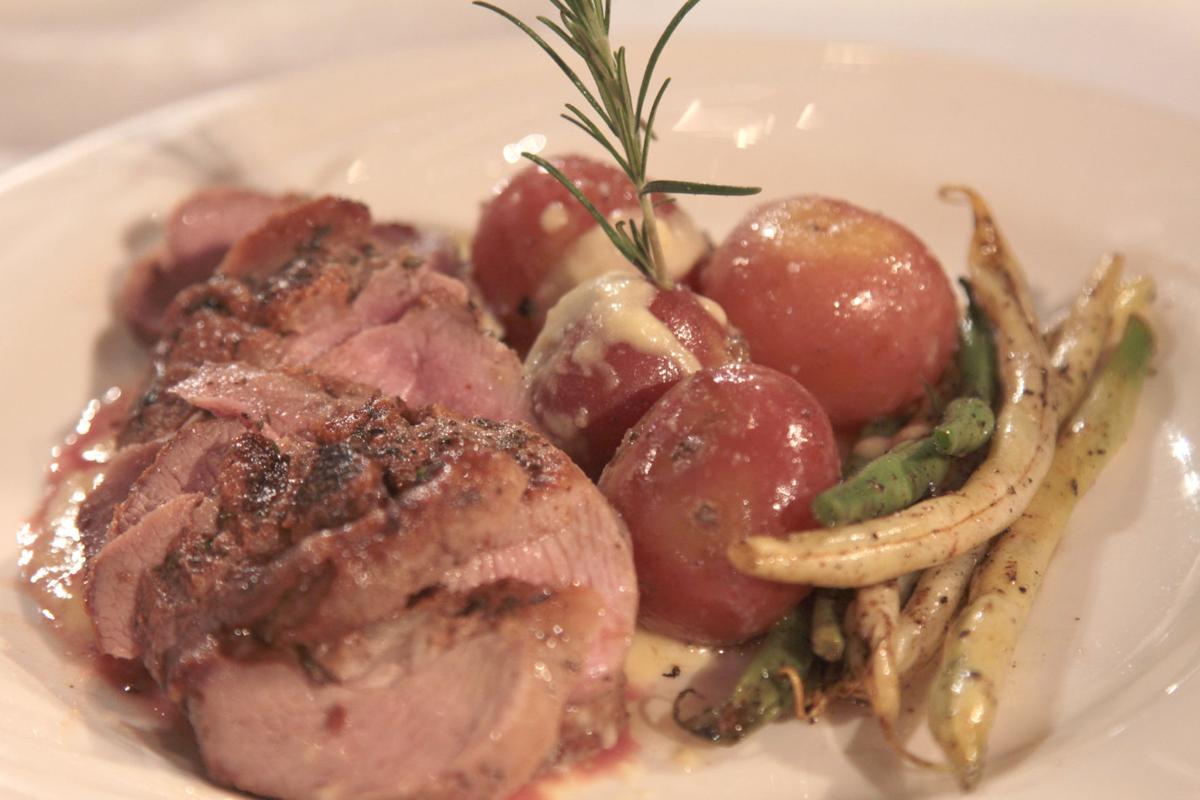 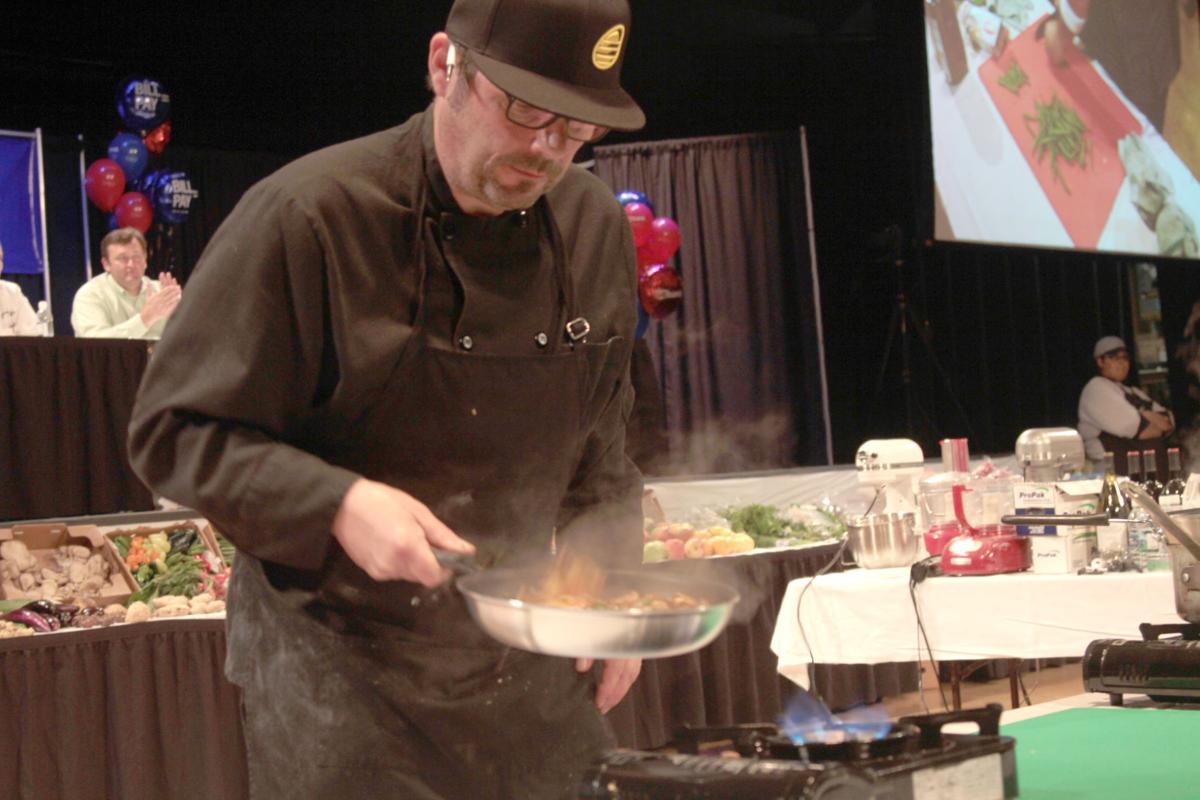 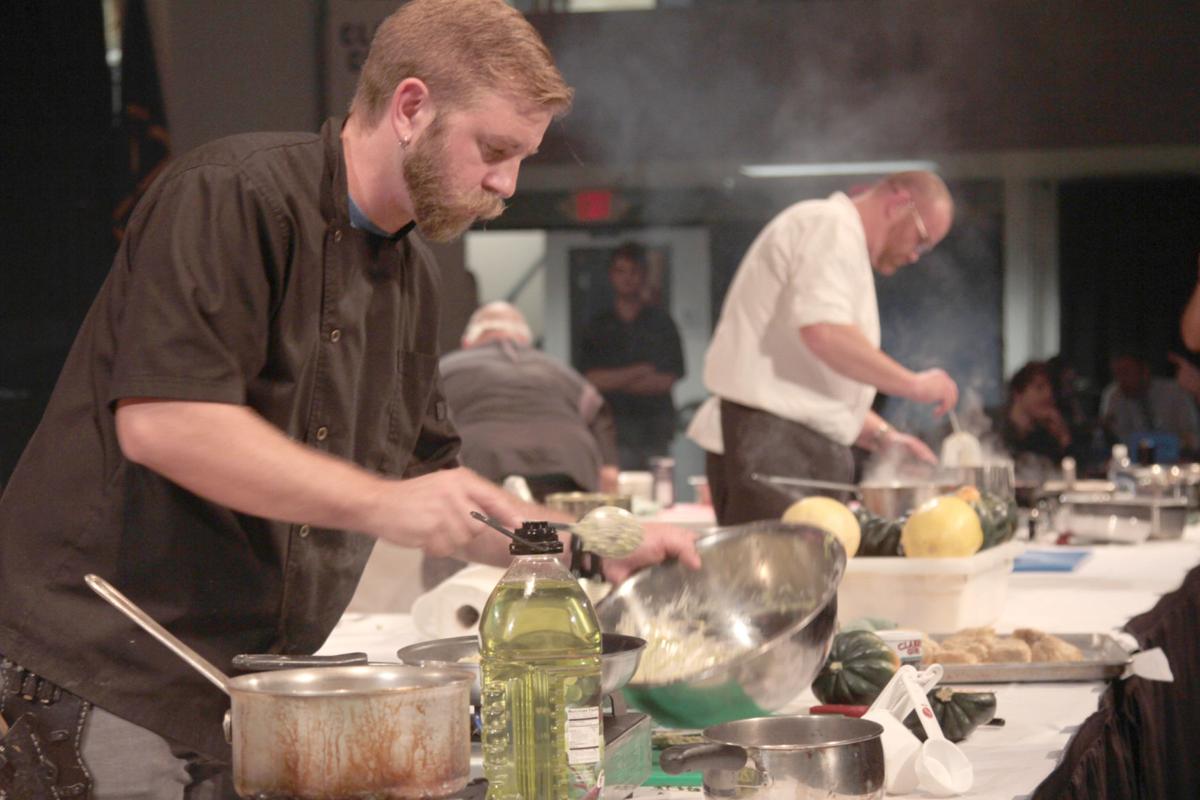 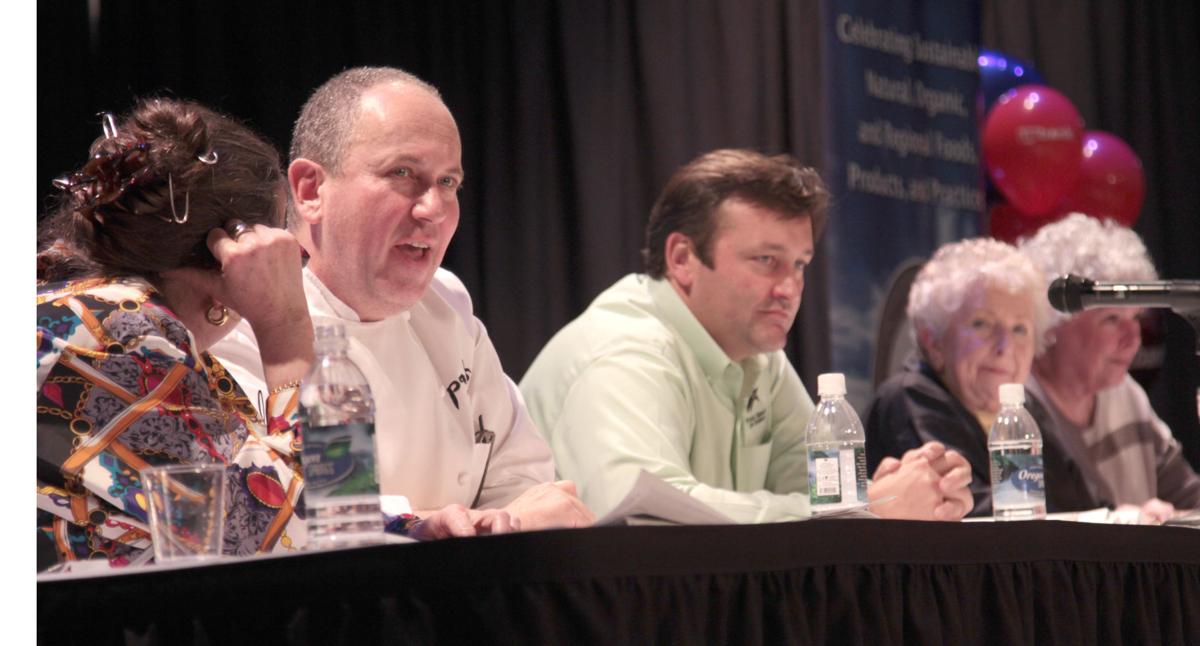 Abe Bund of Newmans at 988 works his dishes at Iron Chef Goes Coastal.

Winning dish ‘almost like a little brunch for dinner’

In a whirlwind of steam and sizzle, the Iron Chefs went to work. For a brief, but furious, hour they whipped, sautéed, baked and boiled. And, just under the wire of the final buzzer, beneath bright lights and before expectant eyes, each two-man team delivered its own elegantly plated, fragrantly enticing, three-course meal to the judges.

In a competition that was, as judge and renowned Portland restaurateur Vitaly Paley put it, “neck and neck,” the team of chefs Jonathan Hoffman (Chef’s Table catering) and Sean Whittaker (Astoria Coffee House & Bistro) was declared the winner Tuesday, Nov. 3.

The victory amounted to a title defense for Hoffman and Whittaker, who took the honor in 2014. That they were once again paired together by random selection offered a head start.

“I think it helped out a lot,” Whittaker said of their previous experience in the competition. “We knew exactly how we did it last year and it worked, so we thought: why not do it again?”

Their strategy revolved around a division of labor. Whittaker handled the first and second courses — a frisée salad with roasted squash, bacon and a lemon-honey vinaigrette and a squash gnocchi with carbonara cream sauce, Dungeness crab, seared scallops and a wild mushroom ragù. Hoffman took care of the entree — a spaghetti squash and savory butternut squash scone, crab cake and hollandaise sauce topped with micro-greens, roasted vegetables, fresh herbs and a squash puree. Hoffman described it the dish as “almost like a little brunch for dinner.”

While the five-judge panel had hardly a bad word to say about any of the evening’s dishes, judge Paley was particularly effusive in his praise of Hoffman’s entree.

“I know how tough it is to run back and forth,” Paley said. “So added kudos to you. The hollandaise held perfectly. The scone is probably one of the best savory scones I’ve ever had. So this is an amazing dish.”

“It was really nice to have someone like him, who’s had a successful business in Portland for over 20 years, tell you that you have a well-balanced dish two years in a row,” Hoffman said. “That was probably one of my highlights, for sure.”

But kind words weren’t kept only for the winning team. Runners-up Aaron Bedard (Stephanie Inn) and Abe Bund (Newmans at 988,) were the subject of similar acclaim, particularly for their entree — a crispy skin duck with butter-poached potatoes, green beans and a butternut and acorn squash sous-vois.

“I have had a religious experience in respect to duck,” said state Sen. Betsy Johnson, a judge. “An epiphany occurred here — my duck epiphany. The duck was really wonderful.”

The evening’s secret ingredient, revealed only moments before the competition began, was squash. Both teams seemed happy with the choice.

“It’s fall,” said Whittaker. “We’re all using squash right now in most of our dishes and on our menus. So it felt like an easy one. It wasn’t a difficult ingredient to incorporate into what I had planned out.”

“’Tis the season for squash,” he said. “I think to make squash the star takes effort, and I think it’s a perfect ingredient for a competition. It’s a no-brainer if somebody gives you a steak or even an egg. To make something with squash sing with flavor is really special.”

And in such a close competition, Hoffman’s abundant use of the secret ingredient may well have been what put them over the top.

As well as use of the secret ingredient, scoring was based on presentation, creativity and, of course, taste.

Auctions offered more than just a chance to judge. The opportunity to taste each team’s three-course meals went for $375 apiece. There were also a myriad of silent auctions, including vacation packages, culinary delights and more. All together the auctions raised $8,378.

Attendees also honored Maggie’s on the Prom as the Best Table presentation. And among a field of six sweets purveyors, Sea Star Gelato was selected Best Dessert. The enthusiastic crowd clustered around Sea Star’s Italian gelato cart drawn in by its cheery red and whited striped umbrella, swooning over the “crime of passion gelato.” The combination of creamy gelato mixed with passion fruit and raspberry coulis, laced with crispy meringue bits earned them the title of “People’s Choice Award for Best Dessert of Clatsop County 2015.”

Despite coming up just short in the Iron Chef competition, being a part of the festivities was nonetheless meaningful for chef Aaron Bedard.

“I feel good,” he said. “This is a great event and it’s really good for the community.”