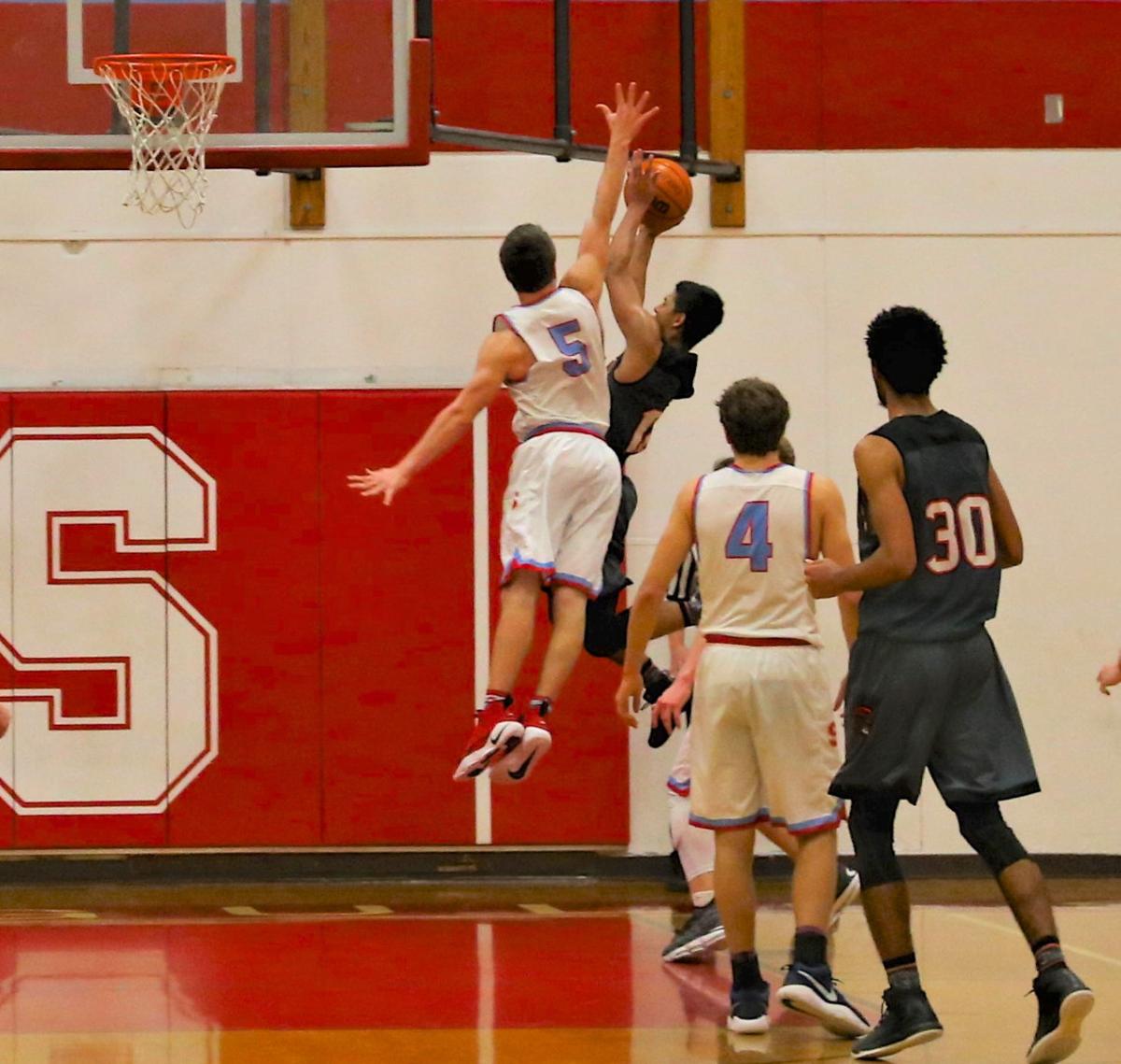 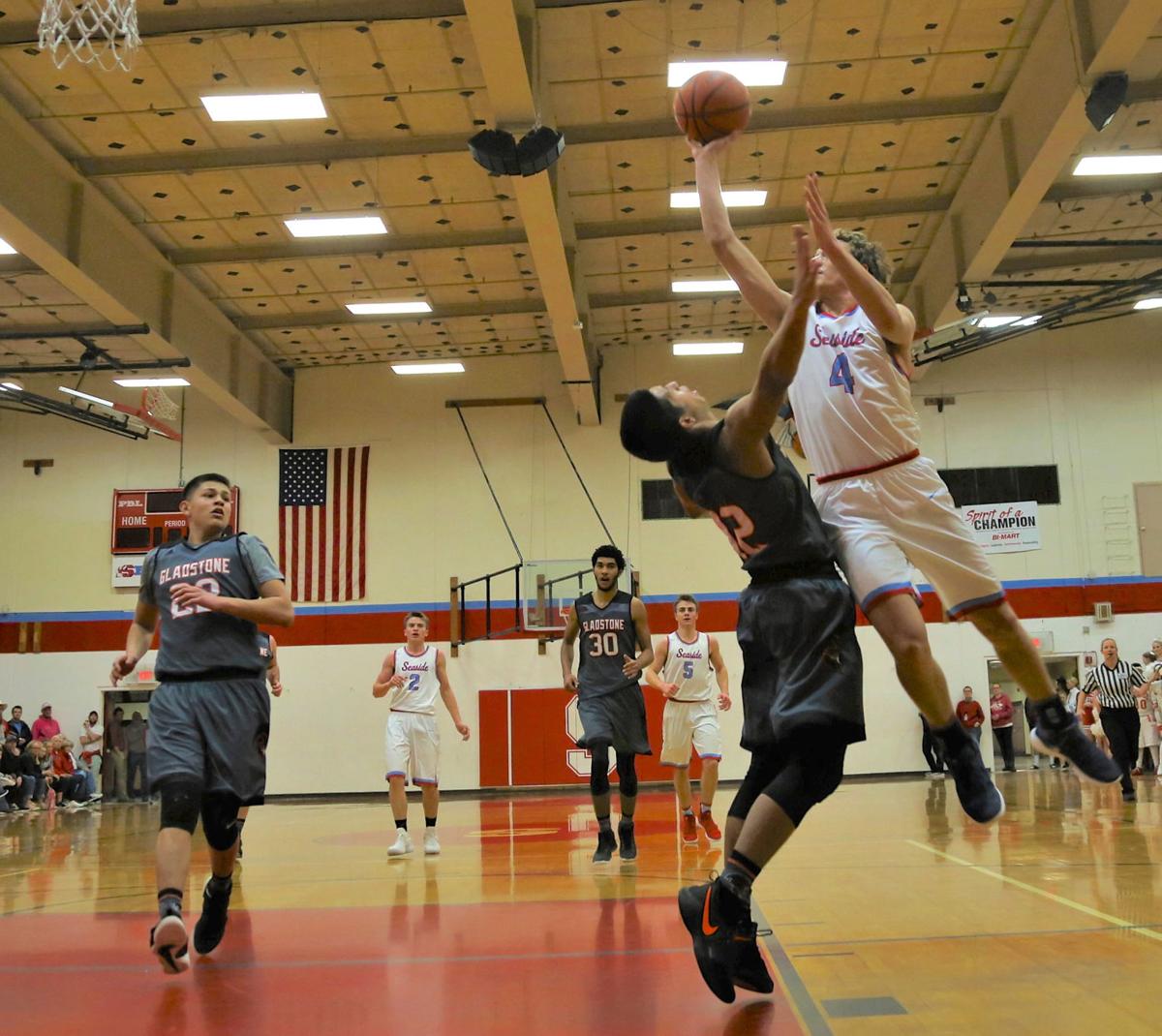 The Gulls' Ryan Hague leans in for a shot attempt over a Gladstone defender.

The Gulls' Ryan Hague leans in for a shot attempt over a Gladstone defender.

And the Class 4A boys basketball state tournament just wouldn’t be a tournament without the Seaside Gulls.

Seaside did just enough to secure their spot in Forest Grove with a 43-32 win over Gladstone, in a Sweet 16 game Friday night at the Gulls’ Nest. Seaside will be a state tournament participant for the fifth time in the last seven years.

Seaside will play No. 7 seed Mazama (17-6) in a quarterfinal game of the 4A state tournament, 8:15 p.m. Thursday at Forest Grove High School. The winner will play the winner of Newport vs. Marshfield at 8:15 p.m. Friday. The Gulls beat both Newport and Marshfield in the regular season.

If Friday’s game taught us anything, it’s that a two-week layoff was about one week too long, for both teams.

Seaside had not played since Feb. 15. The Gladiators wrapped up league play Feb. 16, and their league finale against Estacada Feb. 22 was canceled.

Also, “It’s the downside of having a young team that hasn’t been in this position,” said Seaside coach Bill Westerholm. “I know Chase (Januik), Duncan (Thompson), Payton (Westerholm) and Ryan (Hague) were there last year, but they’re the guys now, and it’s a little different.”

Of course the home court advantage helps. The Gulls are now 37-2 on their home floor over the last three seasons.

Still, neither team was exactly scorching the nets Friday, as the points were hard to come by all night.

In the first half, the two teams combined to make just 11-of-43 shot attempts, 2-for-17 from the 3-point line. There were also lots of turnovers, a combined 27.

Shooting percentages picked up in the second half, but a combined 30 fouls slowed things to a crawl.

“We definitely didn’t shoot the ball very well,” coach Westerholm said. “That was because of our inexperience.”

On the other hand, “I was proud of the way they got after it defensively,” he said. “We caused (the Gladiators) a lot of troubles.”

At one point, the Gulls held a 29-19 lead — which would have been a good first-quarter score in any other Seaside game, but Friday night it was Seaside’s lead heading into the fourth quarter.

And the final three points of the third period represented the most exciting points of the night, a half-court buzzer-beater by Chase Januik that gave the Gulls a 10-point lead.

“It was a field goal,” Westerholm said. “We’ll take anything we can get.”

The Gladiators managed to stay within seven to 10 points in the final quarter, but they also never recovered from Januik’s 42-foot shot.

Seaside had just one field goal in the final quarter, but went 12-of-20 at the free throw line over the final eight minutes. That included seven straight misses, but the Gulls recovered and made eight of their last nine free throws.

Januik led Seaside with 14 points, followed by Hague with 12 points, 10 from the free throw line.

Gladstone finishes 11-13 overall. The Gladiators were 8-1 in the Tri-Valley Conference, but just 1-6 against Cowapa League competition.

The Gulls improve to 19-5, and will be one of the favorites in Forest Grove, which is quickly becoming Seaside’s home away from home. The Gulls are looking to make the championship game for the third year in a row.

“This is a true, competitive group of kids. They’re winners. We’ll get some things ironed out, and these kids will have a different frame of mind offensively when we get there.”