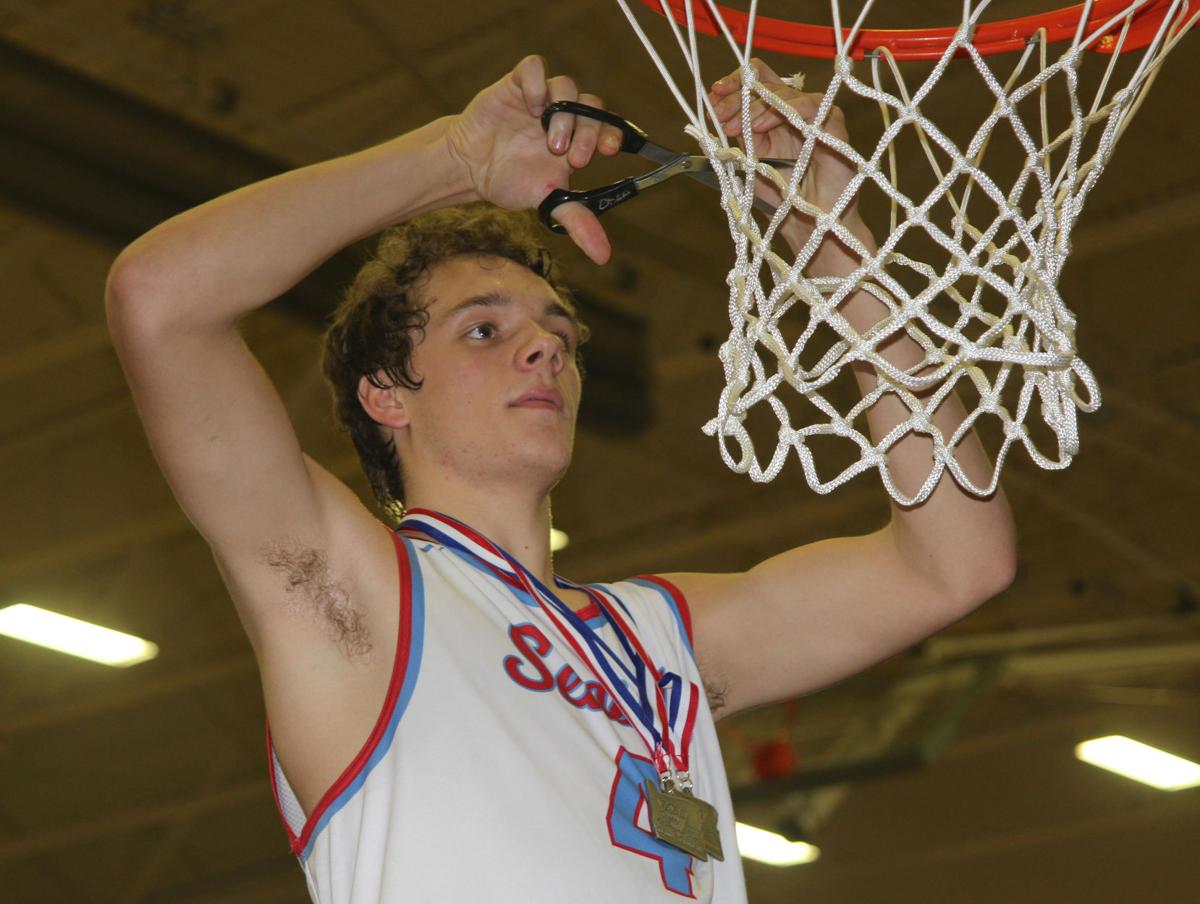 Seaside's Ryan Hague takes his turn at cutting down the nets. 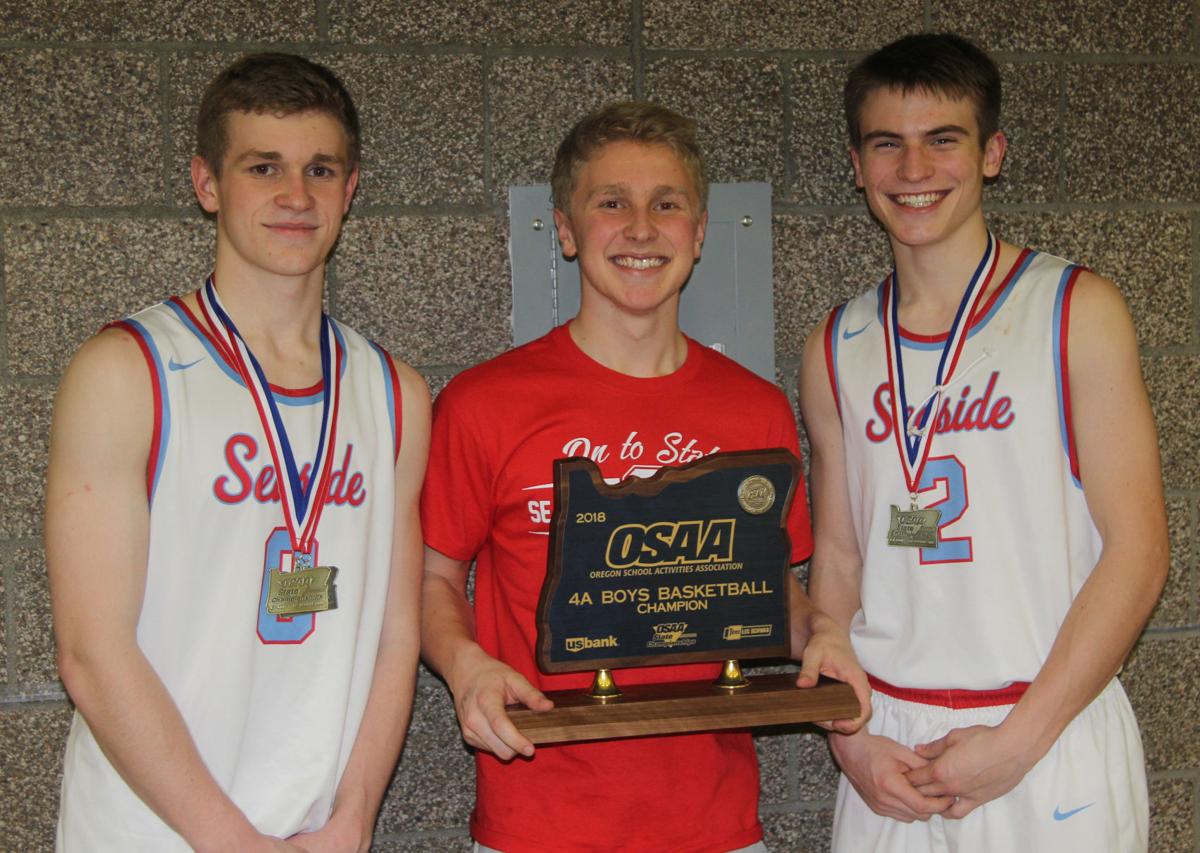 Seaside's Ryan Hague takes his turn at cutting down the nets.

FOREST GROVE — Ten or 20 years from now, when we’re looking back at the great Seaside boys basketball dynasty of 2017, 2018 and 2019 (pending) … maybe we’ll realize how impressive it was to see such an under-sized team win so many over-sized games.

It was all on display again Saturday night at Forest Grove High School, where the Gulls completed year No. 2 of the dynasty with a 48-44 win over Valley Catholic, in the Class 4A state championship game (a.k.a., the “Cowapa League championship”).

It was an almost unexpected title for the Gulls, who didn’t even finish first in their own league.

“We thought next year was our year,” said Seaside coach Bill Westerholm. “We talked in the locker room, and said ‘just embrace what you have right now. You never know what can happen.’ So we’re excited to get the trophy.

In front of a packed house and with their home fans cheering non-stop, the Gulls had to overcome a small halftime deficit, then made four free throws in the final 47 seconds for the winning points.

The Valiants were unable to answer, and Seaside walked off with the big blue trophy for the second year in a row.

The names were much the same for the Gulls this year — they just had some new leaders, and the younger brothers of last year’s stars now in the leading roles.

“It feels a lot different,” said Payton Westerholm, a junior captain this season, who took more of a back seat role to Jackson Januik and Hunter Thompson last year.

This year, it was Westerholm, Chase Januik and Duncan Thompson carrying the load. The trio combined for 35 points in Saturday’s win. Januik led the way with 17 points and five assists.

“It’s a new team,” Westerholm said. “We were role players on the team last year, now we’re the captains, and we have to take on bigger roles. It feels like more of an accomplishment for us.”

Chase Januik, whose brother Jackson was state Player of the Year the last two seasons, had to fill the role left by big bro.

“Last year we were expected to win all season as the No. 1 seed,” Chase said. “This year, at the start of the season, we didn’t even think we were that good, and didn’t realize it until the end of league. We were surprised to be here.”

Still, Seaside was the heavily-favored team Saturday, as the No. 2 seed Gulls were playing in their third straight state championship contest and seeking their fifth consecutive win over the No. 5 seed Valiants.

Going back to last year, the Gulls had won four straight over their league rivals, with two wins (51-35 and 57-50) during this year’s league season.

The Valiants didn’t make it easy, however.

Valley Catholic was coming off a win over No. 1 Banks the night before, a game in which the Braves lost Dalton Renne to an injury, when the Cowapa League’s Player of the Year slammed to the floor following a dunk attempt early in Friday’s semifinal.

As it was, the Valiants still had hopes of an upset in Saturday’s final, as they rallied from a 17-12 deficit with a 3-pointer by Davis Johnson, and scores from Ben Robbins and Jack Grasberger for a 23-19 halftime lead.

But for a team that’s rallied from halftime deficits this year of 17 and 12 points, a four-point deficit was a drop in the bucket for the Gulls. Seaside went 3-point crazy in the third quarter, with Beau Johnson, Januik, Ryan Hague and Westerholm knocking down triples. By the end of the period, the Gulls had doubled their first half points and held a 38-35 lead.

“Their 1-3-1 zone was bothering us, and we slowed the game down so much — it had to be a boring game for our fans to watch,” coach Westerholm said of the first half. “So our adjustment was to flatten the zone out a little, push the ball up the floor and not let them get set. We were going to force this thing into a full-court game. It worked.”

And the fans got their money’s worth in the fourth quarter, which featured three ties and four lead changes.

Valley Catholic’s Andrew Plambeck made two free throws for a 42-40 lead at the 5:00 mark, and Seaside answered with an offensive rebound score by Westerholm and Januik’s jumper along the baseline for a 44-43 lead.

The first two games of the tournament, the Gulls were a combined 20-for-39 from the free throw line. But they finally passed the free throw test in the final 47 seconds, as Hague and Westerholm each went 2-for-2 from the line to secure the victory.

Seaside did not set any scoring records this postseason, but their defense came to the rescue, allowing an average of just 43 points in four playoff games.

“At the start of the year, I thought we were more of an offensive team,” Januik said. “But towards the end and the start of the playoffs, it felt like we turned into the best defensive team in the state. Everyone just stepped up their game, and as a defense, we just became unstoppable.”

With four of their five starters returning next season, the Gulls will be heavily favored to win it all next year as well. Only time will tell how many more state titles this group will win. Keep in mind that Seaside has one of the strongest youth programs in the state, so there’s more talent on the way.

“We’ve built the program from the ground up, the kids know how to win, and we’re going to be good for a while,” coach Westerholm said.

Januik delivered a strong message to rest of the 4A world after the game: “We’re going to be better than ever next year. We’ll be looking for a three-peat.”

For now, sit back and enjoy the ride, Seaside. These are your Glory Years.