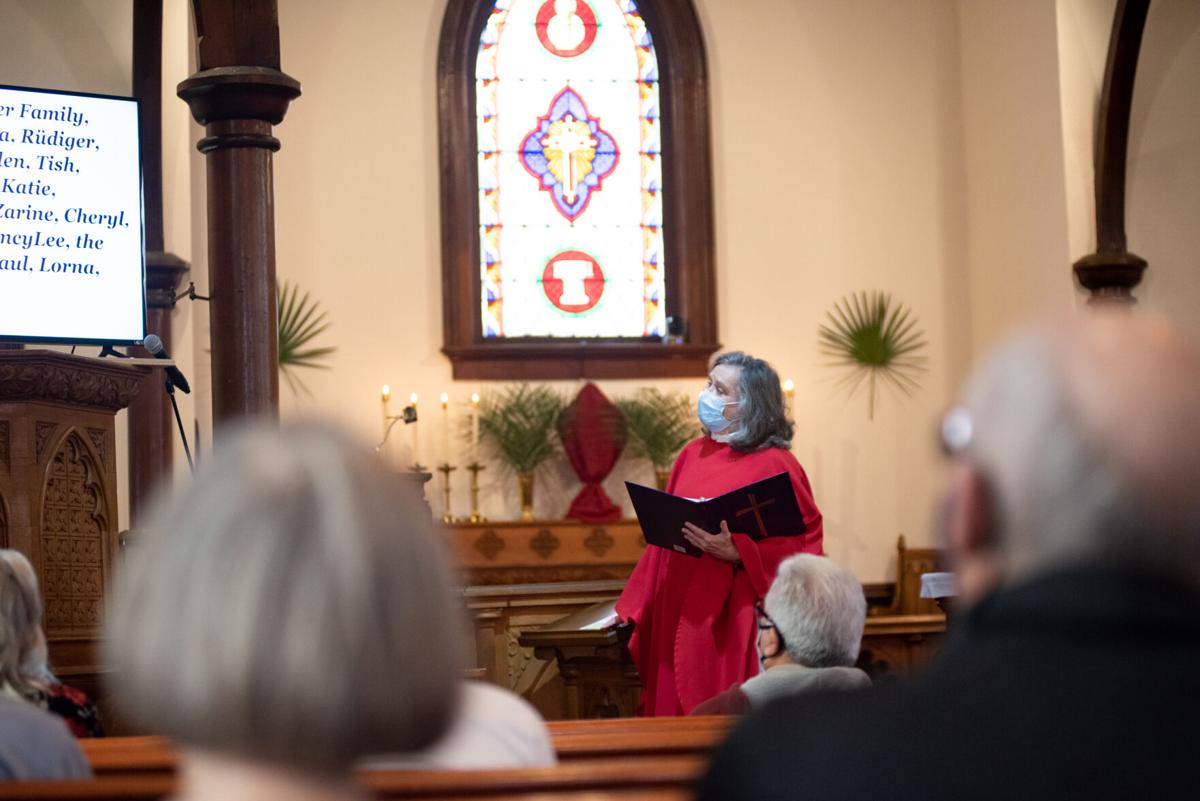 Betty McWhorter leads the congregation at Grace Episcopal Church in Astoria, in-person and online, in prayer during the Palm Sunday service. 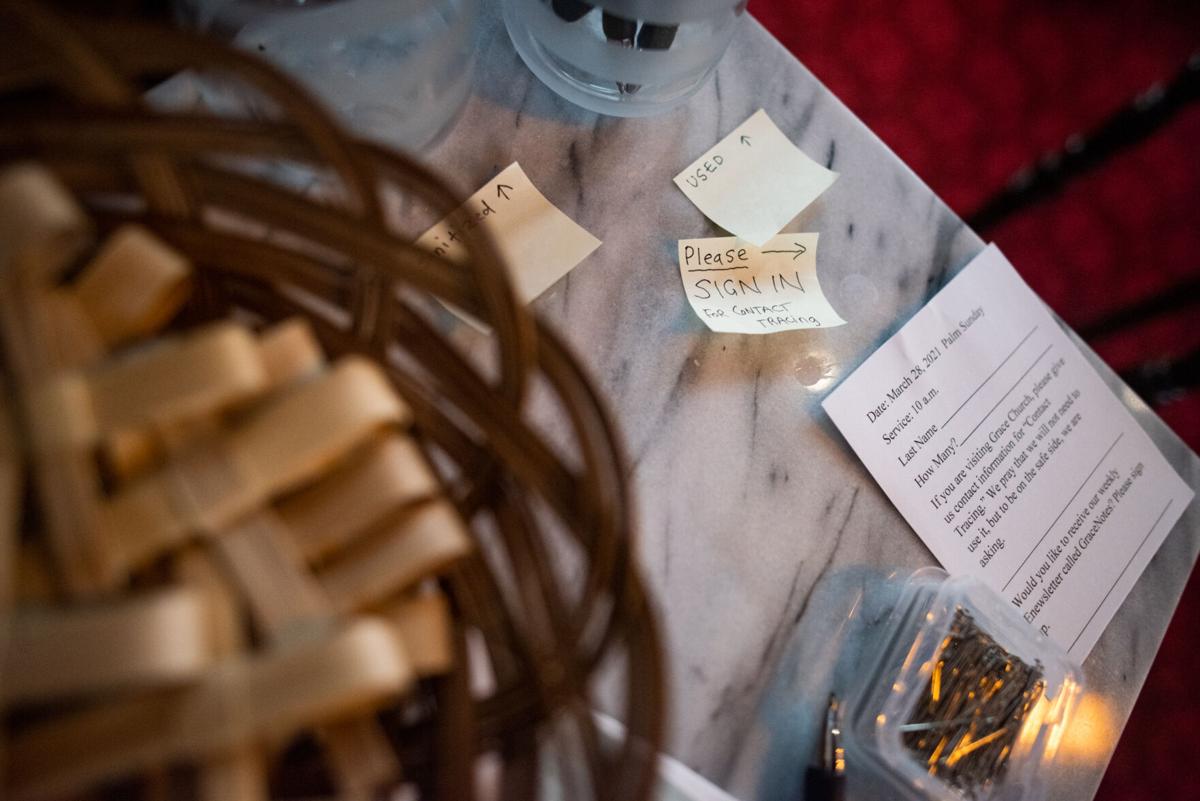 A table at the entrance to Grace Episcopal church has palm crosses for the congregants and sign-in sheets for contact tracing in the event of an exposure to COVID-19. 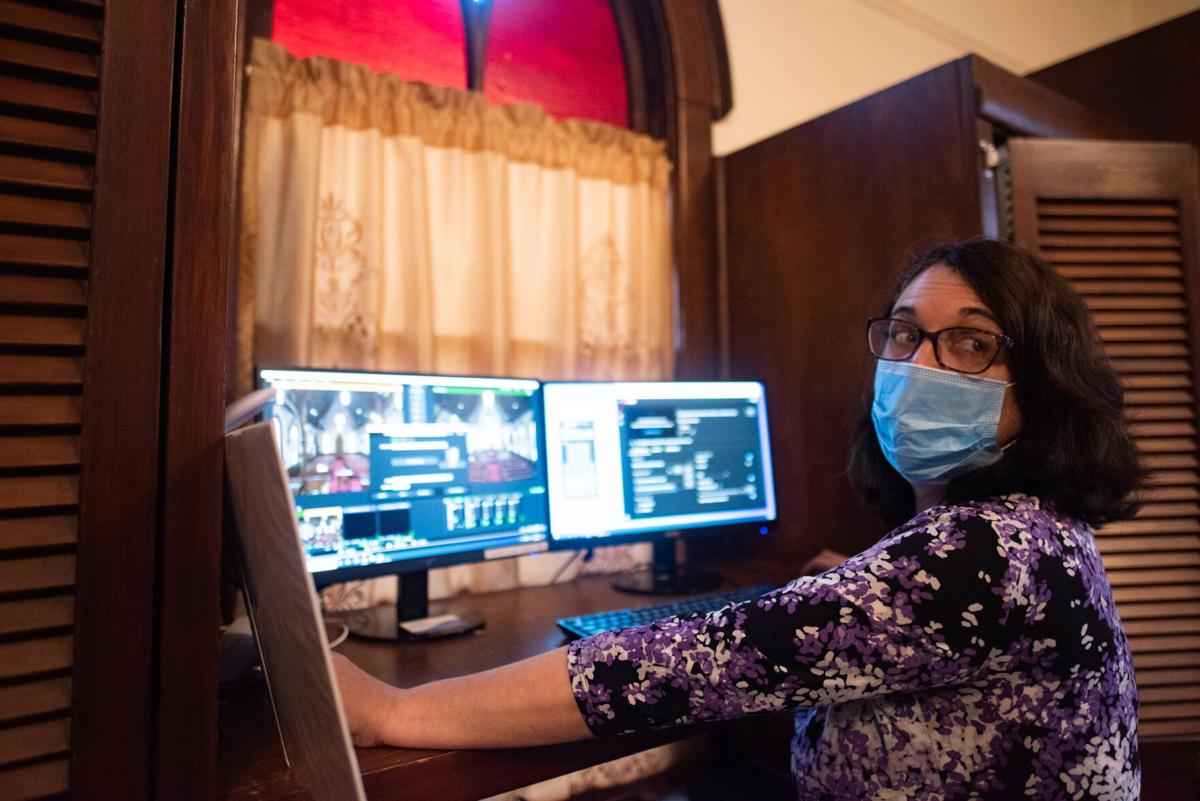 Ashley Lertora runs live feeds of the Palm Sunday service to Facebook from a back room in Grace Episcopal Church. 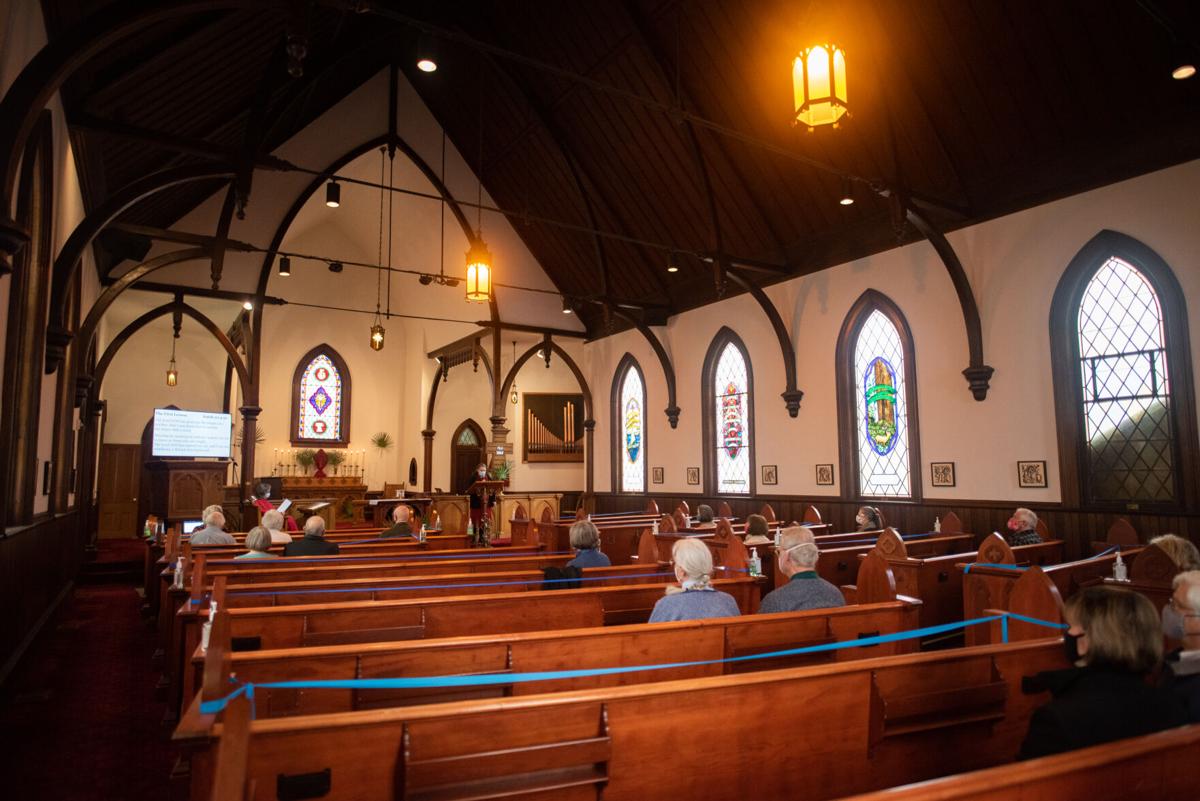 At Grace Episcopal Church, congregants wear masks, every other row is blocked off and bottles of hand sanitizer sit at the end of each row.

It isn’t usually so difficult for Betty McWhorter, a veteran Episcopalian reverend, to write the annual Easter letter to her congregation.

But after a year marked by disease, isolation, loss and social upheaval — a year where Easter celebrations happened on the calendar but not inside most church buildings — the interim rector for Grace Episcopal Church in Astoria labored over what to say this year.

Easter, the springtime commemoration of the death and resurrection of Jesus, is seen by Christians as a time of renewal, newness. In the letter McWhorter eventually wrote, she concluded that, despite everything, “throughout this year, we have never been alone.”

On Sunday, some North Coast churches will mark Easter in-person, with people sitting at a distance from each other, masked. Other churches will continue to worship over a Zoom call or Facebook Live. One church is in the middle of polling members about how they feel about returning to in-person worship and will offer a drive-thru style gathering instead.

“All the trappings that we put around how to make it perfect: the music, the flowers, the new clothes, the hats … whatever it is that we said, ‘Oh, this makes a perfect Easter,’” McWhorter said. “Those have all been stripped away. We’re back to the bare bones of the story.”

And even as communities finally start to see a light at the end of a long pandemic tunnel, every church is going to come out of this changed, church leaders believe. The question is what to do next.

‘We have only met on Zoom’

Pastor Michael Avila has never met the congregations he leads in person. He was appointed to the United Methodist churches in Seaside and Astoria last July, in the middle of the coronavirus pandemic.

At the direction of their bishop, the churches have continued to meet online even as churches in other denominations return to their buildings. So Avila stands in front of a camera during Eucharist, or Communion, in the office that reminds him of NBC Studios in New York City — down to the blue curtain and the chilly temperatures — and says the familiar words: “This is the body of Christ, the bread of heaven …”

He breaks the bread he baked and sips the juice he brought.

In their homes, in front of computer, tablet and smartphone screens, he knows many of the people who attend First United Methodist Church in Astoria and Seaside United Methodist are doing the same.

Can you really consecrate something — Communion bread and wine — virtually?

“I don’t know,” Avila said. “I think the idea is we’re doing the best we can. If our desire is to honor God, God is honored.”

It might be tougher, he concedes, to do a baptism online. Still, the churches have become adept at doing almost everything else virtually. Even as in-person worship returns, some believe the virtual component is here to stay.

At Grace Episcopal, the leadership team is working through a collection of essays that pose questions about what the church looks like and what work it might do post-pandemic.

There is a mindset of: “We have our liturgy and we have our traditions,” McWhorter said. “We’ve always done things this way.”

Well: “The pandemic has just called us to say that that’s not going to work in the future,” she said. “I think that technology is not going away.”

They found that out-of-town family and friends appreciate the option to watch weddings and funerals on a livestream. The move away from paper is also better for the environment and technology may be a way to bring in young people.

For Kevin Lewis, the pastor at Grace Community Baptist Church in Astoria, the pivot into a more online presence was not daunting. Lewis considers himself technologically savvy and the church already used television screens, PowerPoint slides and the like in services.

But email and social media — the primary forms of communication and connection for the church over the past year — were new to some of the church’s older members. Lewis visited several senior church members at their homes, downloaded YouTube for them and linked everything up to the church’s offerings. There was one woman who had never used email before, so Lewis created an address for her.

As many people’s lives moved almost entirely online, Lewis thinks the days of lingering in a church foyer, poring over printed materials and then venturing into the sanctuary to see what it’s all about are likely over — along with the potlucks, too, he’s sorry to say.

People are looking online before they ever set foot in the building, he said. Because of the conditions created by the pandemic, website visitors often have the option of watching entire videos of past services to get a feel for the preaching style, the music, the flow of a particular church’s worship service.

“The new door of our church is the website,” Lewis said. “That was not true a year ago.”

And he sees other opportunities for church buildings to be more active in the community, not just a place people go once a week. Since the start of the pandemic, Grace Community has hosted community groups that needed larger spaces to meet safely. The church also partnered with Astor Elementary School to operate as a learning hub for students who needed access to high-speed internet and the space to spread out.

Lewis sees a shift in how churches think about ministry. Instead of a “build it and they will come” mentality, he feels the church must put even more effort to meet people where they are.

Change can be difficult, frightening, but it can also be necessary.

Judy Atkinson thinks of all of the people at Grace Episcopal who stepped up and learned how to use the cameras and computer equipment that enabled the church to continue providing worship services, how they worked on despite all the uncertainty and were able to open the doors again, even to just a limited number of people.

Atkinson, who raised her children at Grace Episcopal and is a member of the church’s leadership board, struggles to come up with an analogy for the past year.

Certainly, she has not felt like she was on a mountaintop, but neither, she said, “has it been slogging through those miry bogs like in some Psalms.”

She thinks maybe it is more like when the ancient Israelites, freed from slavery in Egypt, followed the prophet Moses into the wilderness, led by a god who went ahead of them in the form of a pillar of cloud by day and a pillar of fire by night. Through all their long wanderings, when a need arose, God was there.

Or maybe, Atkinson said, it is “like traveling through a tunnel that seemed never-ending, but all of a sudden there is light at the end. And we’ve been together in this journey with each other, with folks moving toward the front when needed.”