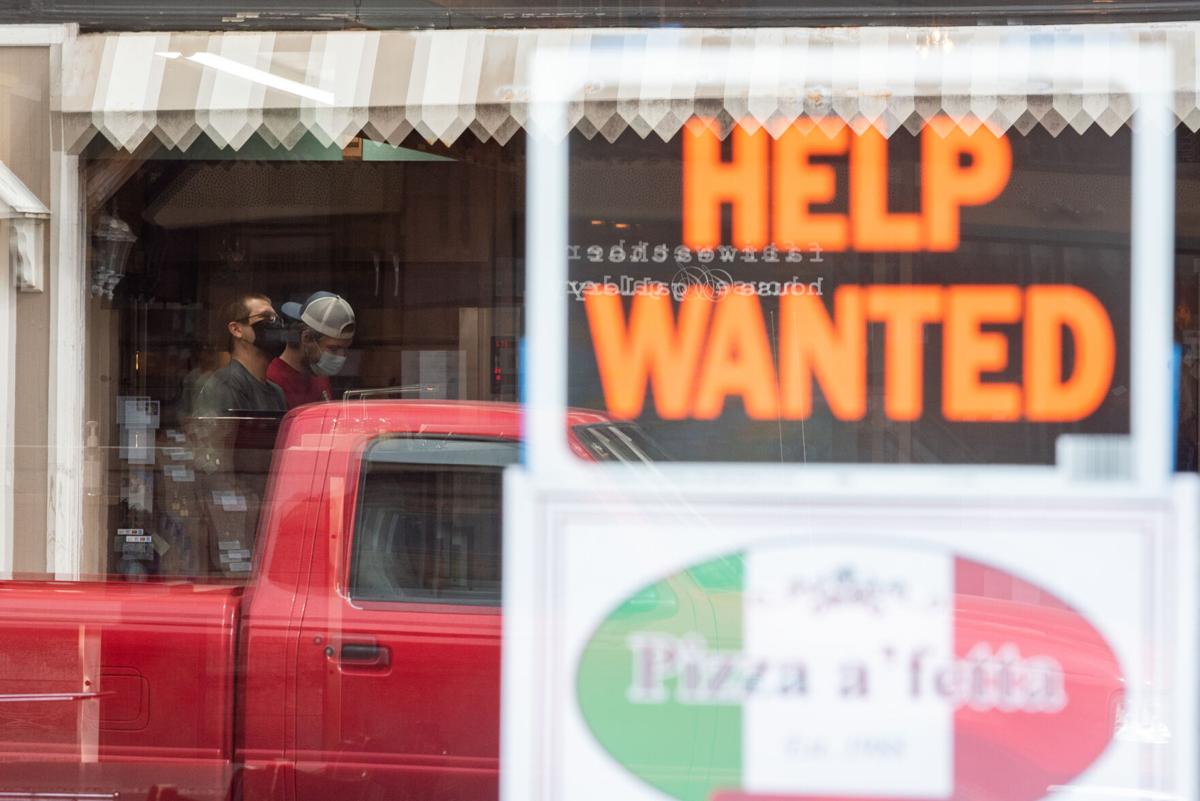 Sean Acuna and Luke Crews work behind the counter at Pizza a’fetta in Seaside. The restaurant wants to hire more staff in preparation for summer. 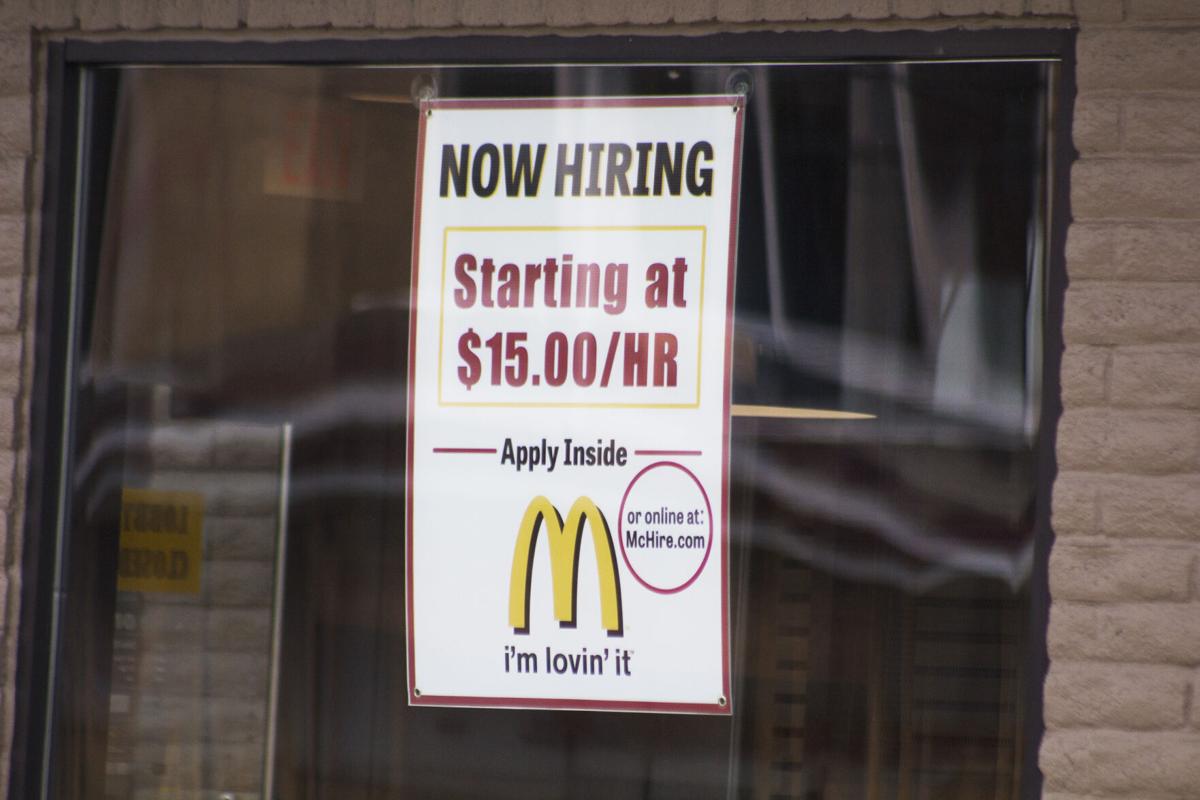 The McDonald’s restaurant in Astoria upped its starting wage to $15 amid a coronavirus pandemic that has led to a labor shortage. 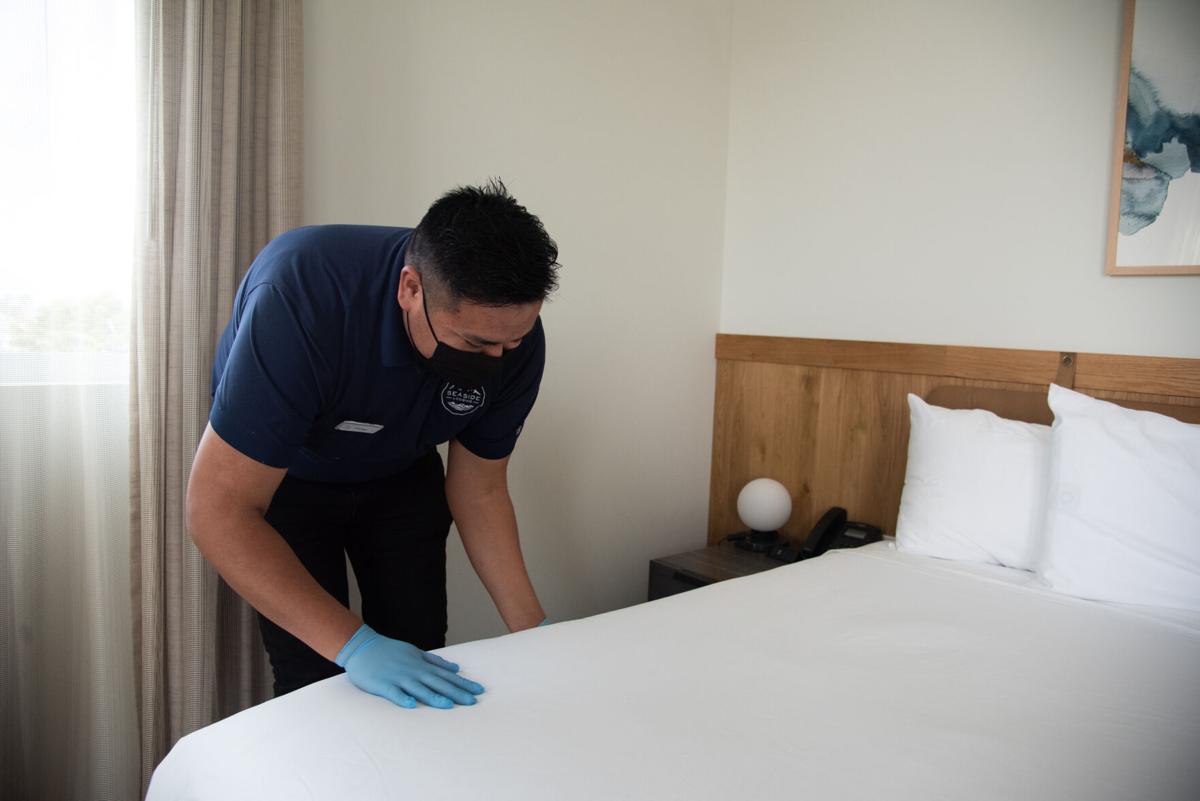 Esteban Becerra smoothes a bed at the SaltLine Hotel in Seaside. The hotel needs housekeepers and other staff. 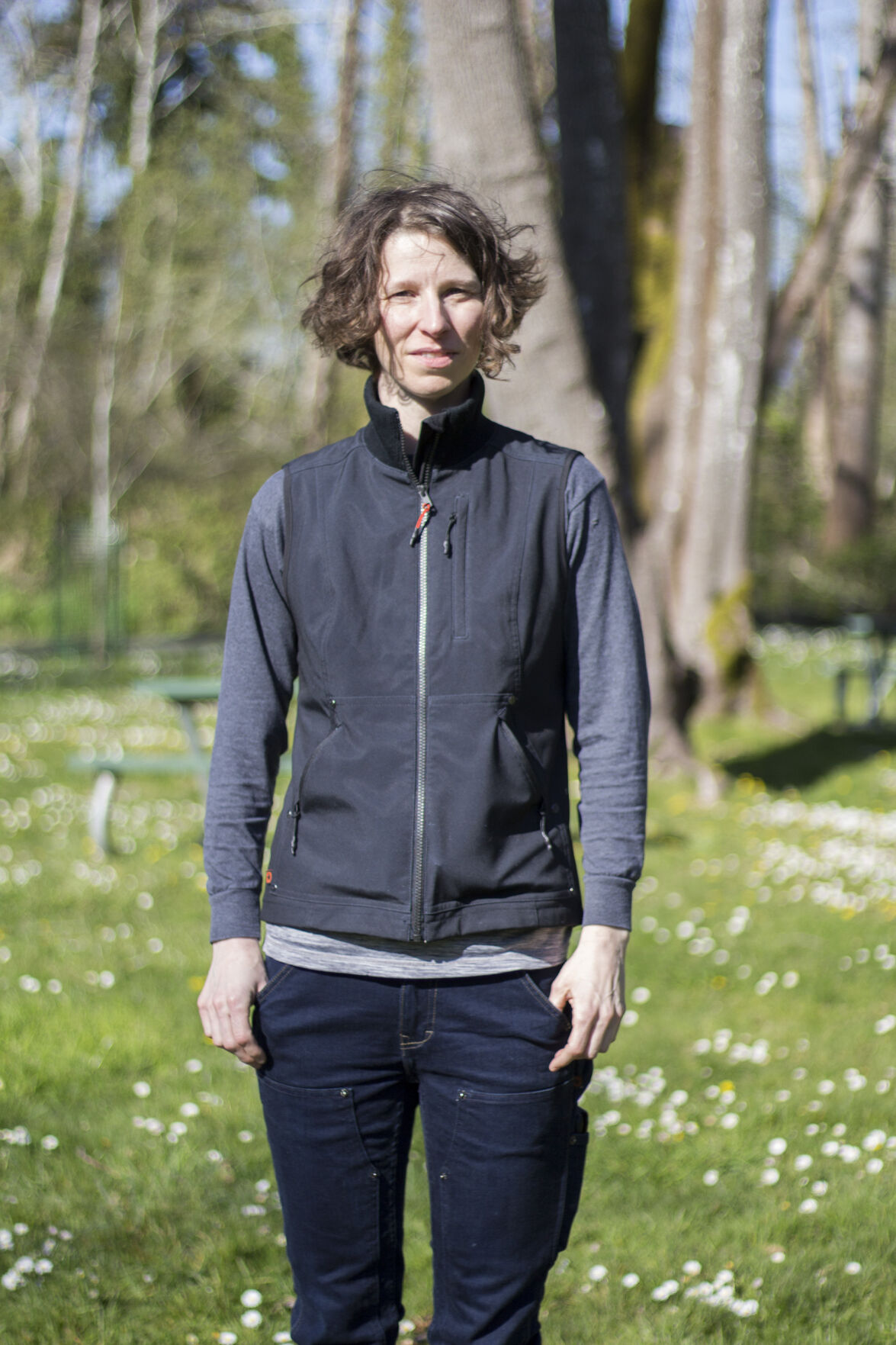 Josie Lilly used a layoff during the coronavirus pandemic to go back to school to become an electrician. 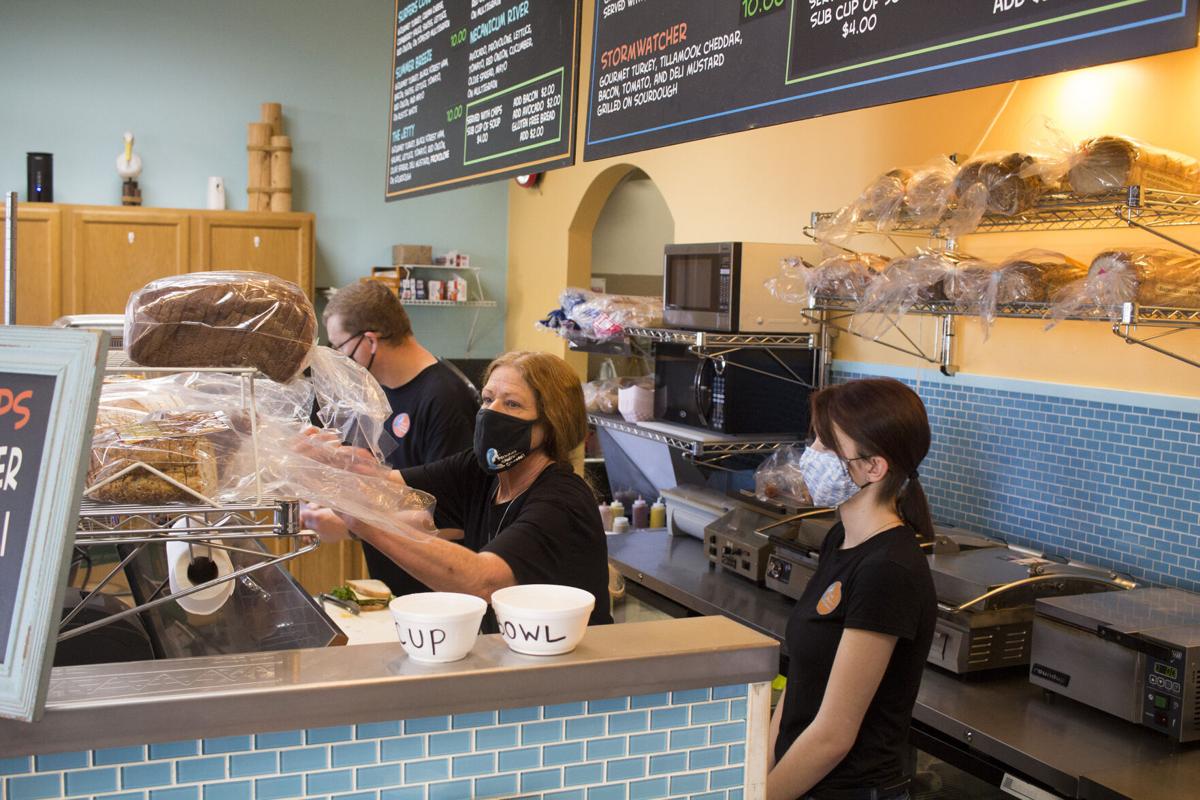 A sign outside McDonald’s in Astoria advertises jobs starting at $15 an hour — $3 above the $12 minimum wage on the North Coast and the rallying cry of labor activists across the nation who want to more than double the federal standard.

After a year of business closures, layoffs and other disruptions to the economy from the coronavirus pandemic, many businesses are eager to hire, but are finding that some people are reluctant to return to the workforce.

Unemployment benefits, child care, family obligations and health concerns are among the factors, along with a weariness over the unpredictability of virus restrictions. Clatsop County moved back into the state’s high-risk level in late April after a surge of new virus cases this spring.

While businesses have always competed for skilled workers, the pandemic-related labor shortage has created competition for traditionally lower-wage, entry-level and seasonal workers, leading some to offer higher pay and other incentives to attract a deeper pool of job candidates.

Oregon’s seasonally adjusted unemployment rate in March was 7.1%, down 1% from February but still more than twice the rate for the same month last year, just before unemployment jumped to more than 23% after virus shutdowns.

State unemployment paid $370 a week on average the first quarter of the year, in addition to $300 a week from the federal government. The benefits total $16.75 an hour for someone working full time, or $34,840 a year.

Seaside hotelier Masudur Khan prides himself on keeping a staff of around 100 year-round, while adding about 10% to 15% during the summer tourism rush. This year, amid high demand for housekeepers, that means paying his employees at least $16 an hour through Labor Day, when the more generous unemployment benefits are scheduled to end.

“There’s no option, because there’s demand and less supply,” he said. “It’s economics, and they have the power. If you hire them for $14 or $15 (an hour), after one week of training, they say, ‘I’m going to go to the other hotel, because they’re offering me more, unless you match it.’ If you match it, then what’s going to happen? You have 100 other employees, and you have to match. So it’s really difficult to manage.”

Khan blamed the government for what he described as a ham-fisted application of unemployment benefits in places, like the coast, where jobs are readily available.

David Posalski, a Seaside city councilor who owns several local eateries, said the labor shortage has been exacerbated by virus-related travel bans that have stopped between 50 to 60 foreign exchange students from Asia and Europe who come each year to work in hotels and restaurants. He said he usually hires seven to eight students, mostly from Lithuania.

“Between my businesses, I could use another 10 people,” Posalski said. “If I get my Lithuanians come summertime, I could probably get away with three or four.”

Kim Dewar, an office manager for Total Employment and Management, oversees several hundred temporary workers for mostly blue-collar positions between Astoria and Newport. She’s been fielding a flood of calls from businesses struggling to find workers through traditional advertising and perks like signing bonuses.

“Everybody’s wanting to keep it at last year’s wages, and that just isn’t going to work,” she said. “People have had a year to be home, get stimulus money, and they don’t want to come back and work for what they worked for last year. Because guess what? If they stay home, they can still get the money.”

Regional workforce analyst Shawna Sykes said most of the shortages appear to be in lower-paying hospitality jobs, where front-line workers often have to enforce health and safety guidelines to protect against the virus.

“One of the things we’ve been hearing from employers is the frustration with enforcing the COVID restrictions with guests that don’t want to comply,” Sykes said. “That confrontational aspect that is really difficult for some people to handle as wait staff or hostesses ... even retail.”

People who want to come back to work face pressures from child care to the lack of affordable housing. The county, like all of Oregon, is considered a child care desert. Even small differences between pay and unemployment benefits can have an impact when rents routinely surpass $1,000 a month for one-bedroom apartments.

Dewar’s office provides a shower and laundry to help workers who struggle to find adequate housing. She called the local rental market “exploitative.”

“I have four employees who share one room, and they pay $500 a month for the bunk,” Dewar said.

Sykes said the county has a unique set of housing challenges, with a higher proportion of retirees, remote workers moving to the coast and around 22% of homes being second or vacation properties, compared to 4% statewide.

Warrenton Mayor Henry Balensifer, who works at JBT Lektro, said the county also faces shortages for higher-wage jobs in industries such as manufacturing, where global supply chains have been disrupted by the pandemic and created uncertainties for businesses.

He also recognized the logic of staying home, earning unemployment and saving on child care costs.

“Child care can cost the equivalent of a mortgage anymore these days,” Balensifer said. “So at that point, if the unemployment benefit is going to cover what you need ... it’s cheaper to stay home than pay for child care.”

‘There was no child care’

Some service-sector workers, like Josie Lilly, have turned the pandemic into an opportunity for professional development. Lilly was laid off along with most of the staff at the Astoria Coffeehouse & Bistro just after her daughter’s sixth birthday in March 2020. Then schools closed.

“I was kind of trapped at home with my daughter,” Lilly said. “There was no child care. Trying to be my daughter’s playmate 24/7 was a little draining and exhausting. I was kind of anxious to get back doing something.”

Lilly had periodically attended college, but she usually went back to the relatively good pay — after tips — from restaurants. But after more than 20 years of waitressing, she decided during the pandemic to get more serious about a long-held dream of becoming an electrician.

She now spends her days attending class, caring for her daughter and picking up shifts at Columbia Housewarmers on the rare occasion she can find a babysitter.

“I’d definitely been considering it and kind of dipping my toes in the water before,” Lilly said, “but this was the real shove over the cliff.”