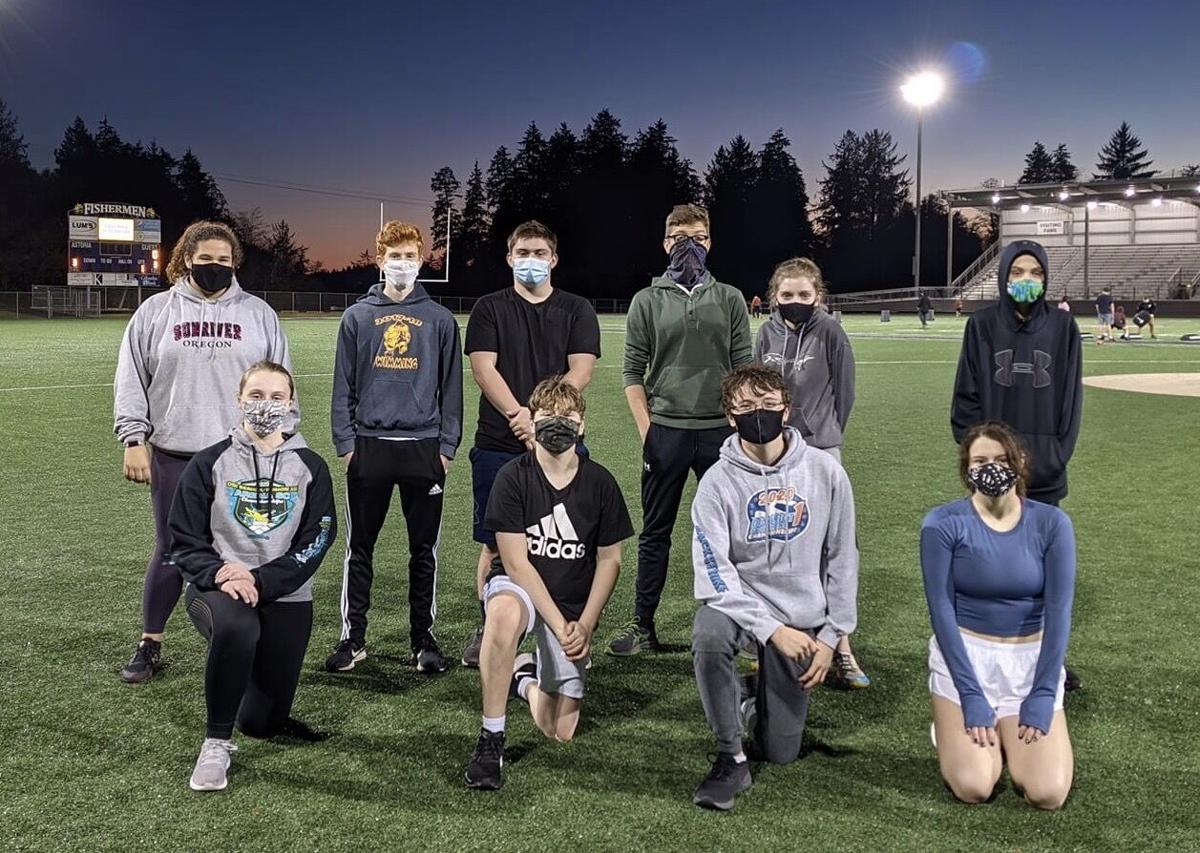 The Astoria swim team following a practice at CMH Field. 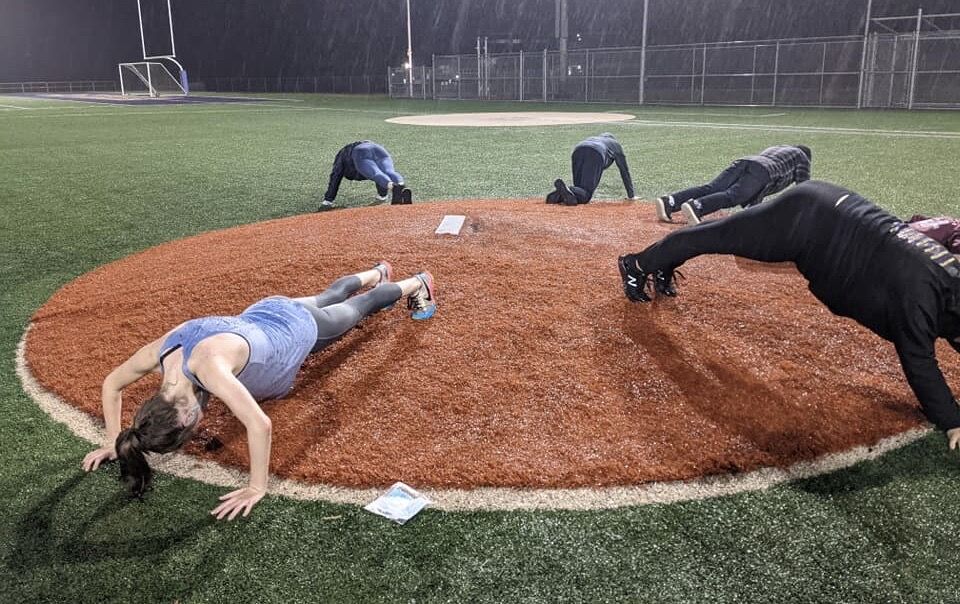 Astoria swimmers undergo strength and conditioning on the pitching mound at CMH Field.

During the coronavirus pandemic, athletes from certain sports can adapt and still practice their craft.

Golfers need a golf course and a set of clubs. Basketball players need a court and a ball.

There’s no water shortage on the North Coast this winter, but finding a pool to practice in is a little harder to find.

The Astoria swim team recently spent over a month practicing without a place to swim.

For new head coach Alyson O’Connor, having to lead a team with no pool is one obstacle she was not expecting.

Because of precautions for COVID-19 and funding issues, the Astoria Aquatic Center has been closed since March.

In November through mid-December, Astoria swimmers were allowed to practice — per guidelines set by the Oregon School Activities Association — just not in a pool.

So, the Fishermen took to the next best place and held workouts at CMH Field. They were all “dryland” workouts, meaning workouts swimmers completed outside of the pool.

“Our pool wasn’t open,” O’Connor said. “We kicked around the idea of using Seaside (Sunset Empire Park and Recreation District’s Sunset Pool), but we could only have 10 kids at a time, plus a coach,” and just 30 minutes per practice.

The OSAA’s winter sports season of basketball, swimming and wrestling is slated to start the second week of May and run through late June.

O’Connor and her swimmers are hoping to have their home pool back by then, in the hopes of salvaging some sort of season.

“I told our swimmers, ‘just roll with the punches,’” said O’Connor, who replaced Kathryn Zacher as the Astoria coach over the summer. “I know the OSAA is doing this to keep everybody safe.”

If winter sports athletes do have a season, “it’s going to be a condensed season,” she said.

And the days of big swim meets, such as the Andrew Nygaard Invitational, Cowapa League, districts and state championship, may not take place until next school year.

“There will be no state meet this year,” O’Connor said. “Some of my swimmers, especially the seniors, have been swimming since they were 6 or 8 years old. We watched them grow up through the club team, and I really want to give them something.

“So I was excited when Howard told us we could do dryland workouts, so at least they have something.”

And how does a swim team practice outside of a pool?

“There’s more running, and a lot of strength and conditioning,” O’Connor said. “Working on getting the shoulders and hips strong. We implemented dryland workouts last year, and we saw huge improvements in the swimmers, who developed more strength, and we had less injuries to the shoulders.”

So, in their practices in November and December, the swimmers hit CMH Field. To simulate swimming, they balanced themselves on benches to practice strokes.

Working out at CMH Field on cold winter nights wasn’t too inviting, so O’Connor said she “tried to throw some fun into it, because they’ve just been stuck at home. They got to play kickball and goof off a little. They were still working hard, but it’s just not the same when you’re not in the water.”

In swimming, “if you’re not in the water doing it, you lose a lot physically,” O’Connor said. “I tried to get them to high cardio with the running and sprints and plyometrics. With my sprinters and my long-distance swimmers, I was pushing them out of their comfort zone, making them run the perimeter of the field for seven minutes. Some of them were having a hard time, but the endurance kids were loving it.”

The Fishermen had a handful of swimmers who were still able to work out at the Seaside pool.

“About 10 swimmers were going to Seaside to swim Monday, Wednesday and Friday with the Seaside rec team,” O’Connor said. “ ...When they are there, they can only swim for maybe 30 minutes, because you can only be in the building for 45 minutes. It’s better than nothing.”

Most swimmers in the state are in the same boat as the Fishermen.

“Most of the pools are closed,” O’Connor said.

As in all activities, it will come down to giving the athletes their only spring fling with sports for this school year.

“Hopefully when the pool opens, the North Coast (Swim Club) teams can start back up,” she said. “A good number of my swimmers are on that.”

She added, “I’m trying to make the most of it and giving the seniors the best that we can. They were breaking records last year and the year before, so I’m hoping to give them something to work for.”

O’Connor estimates that there are 30 to 35 swimmers on this year’s team, a group that includes talented returners Tori Smith and Grace Peeler.

“Our boys’ relay team is looking good,” O’Connor said. “Our girls are looking strong, with Tori and Grace, and freshman Hannah Daniels. And with Constance Rouda, we could have some strong relay teams. It could still be exciting. I guess you take what you can get and make the best of it.”