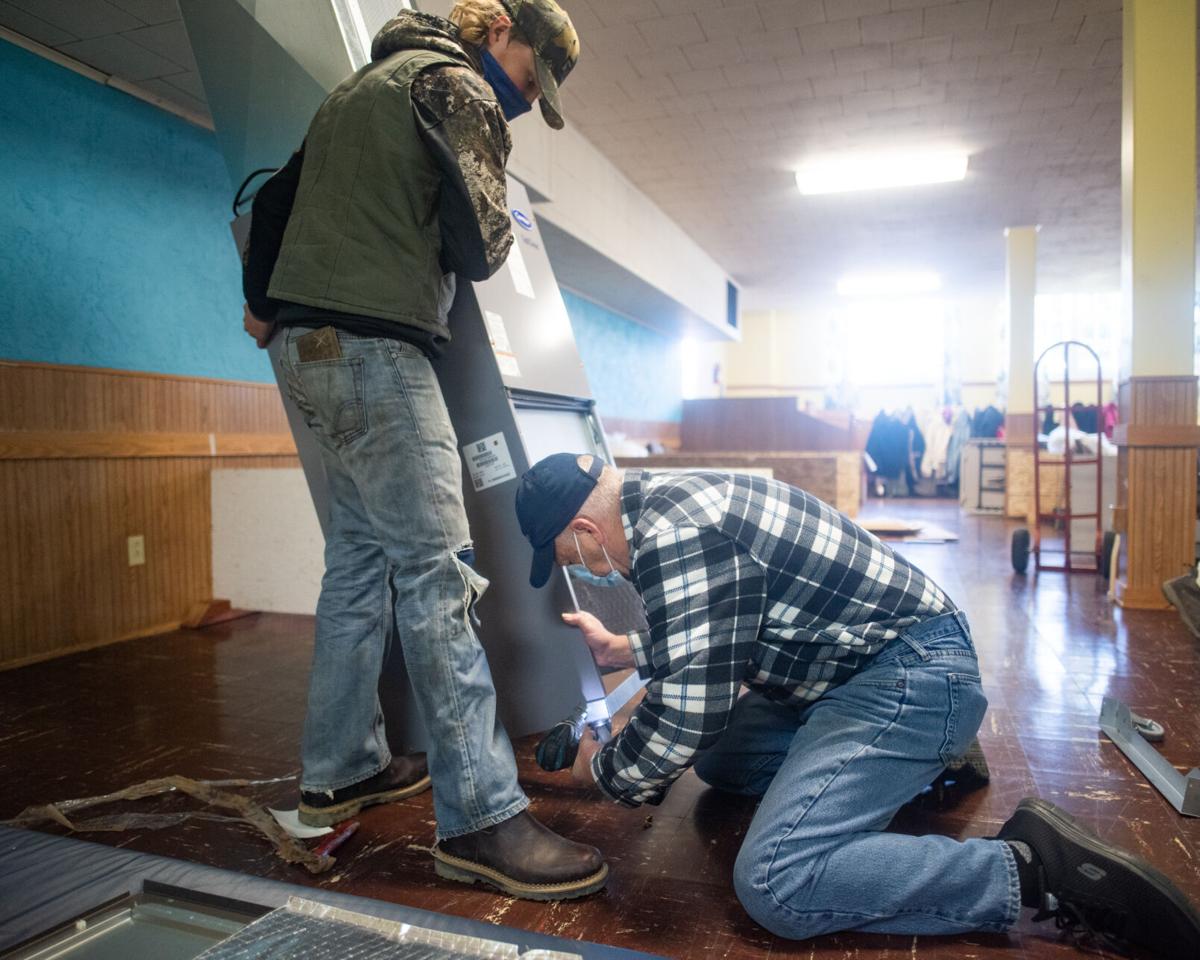 P&L Johnson workers install a hospital-grade air purifier and filtration system the company donated to the Astoria Warming Center to allow the homeless shelter to operate more safely during the coronavirus pandemic. 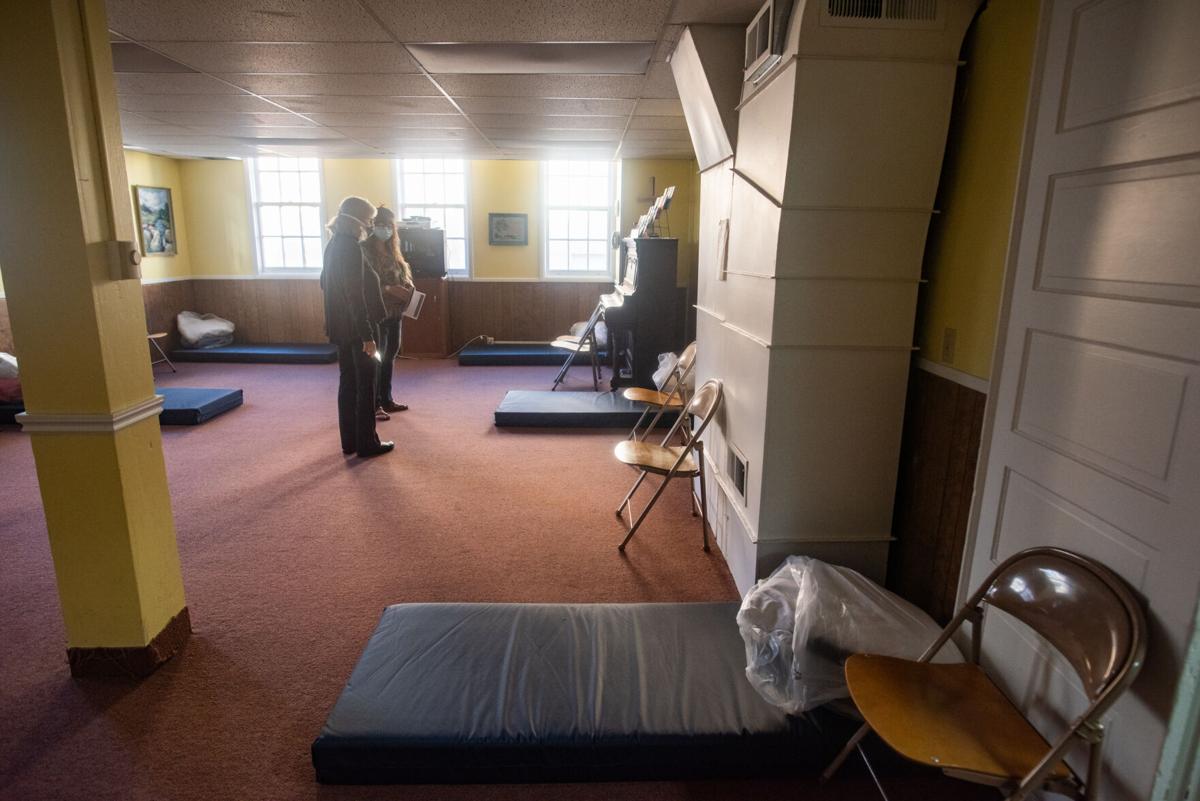 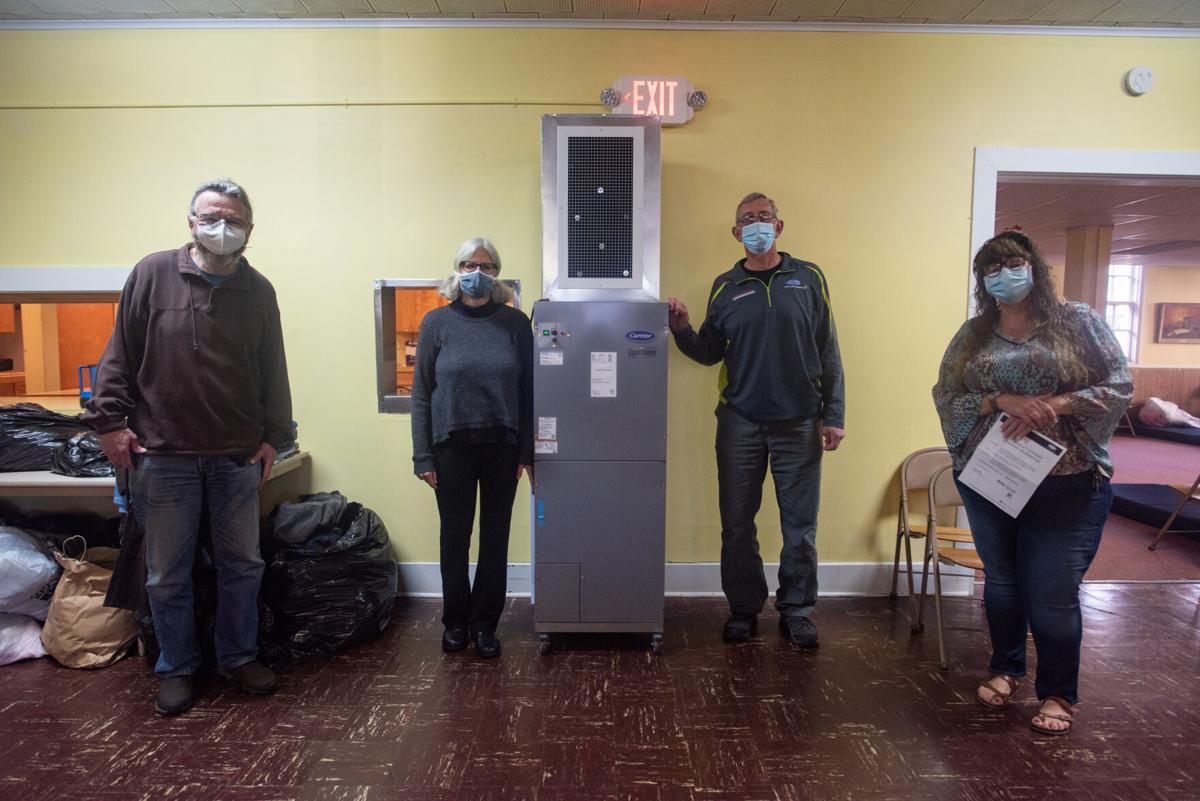 The Astoria Warming Center had barely shut its doors at the end of the season in March when board members began planning for a “COVID season” in November.

Now they will begin operations on Nov. 15 with a new executive director — Clatsop County Commissioner Kathleen Sullivan — paid staff instead of volunteers, a slight dip in the number of people they can host per night and a roster of new safety protocols.

The warming center is one of the few emergency shelter options on the North Coast and the only low-barrier option for people who are homeless. The shelter operates during the winter months out of the basement of First United Methodist Church above downtown Astoria.

At the close of the last season, the coronavirus pandemic had only just begun to influence local life. Schools had closed temporarily and a number of events had been canceled or optimistically postponed. The full wave of changes and restrictions to contain the disease had not yet hit.

Warming center board members saw virus-related challenges as an opportunity to build capacity within the organization and secured funds to hire an executive director, as well as paid staff.

“I am incredibly happy to be joining the amazing Astoria Warming Center team,” Sullivan, the chairwoman of the Board of Commissioners, said in a statement. “The board members, staff, volunteers, neighbors and community partners have done tremendous work since 2014.”

Sullivan is finishing up her term representing the east side of the county after losing a bid for reelection in May. She previously worked as a residential manager in an affordable housing building in Portland and as the front office manager at the Cannery Pier Hotel & Spa in Astoria.

She said her role at the warming center is a new chapter, separate from her work as an elected official.

In the past, the shelter’s board president, along with the shelter’s manager, Cheryl Paul, functioned as an unpaid executive director. It was a role that could fill around 30 hours a week during the busy winter season, said Rick Bowers, the board president. With the complications and concerns around the coronavirus, this was an untenable arrangement.

“Having a full time (executive director) as well as a committed current board president backed up by a very energetic board — and paid operational staff — will allow us to respond as the season unfolds,” he said.

Sullivan will be supported by the paid staff instead of volunteers this year, since many of the shelter’s go-to volunteers are considered high risk for the virus.

While the board is looking at ways to still utilize volunteers when people in need of shelter are not on site, Bowers does not expect to bring volunteers back into day-to-day operations until next year.

“(Volunteers) have been the heart and soul of the center,” Bowers said, but, he added, “given the pandemic, we want to focus on safety — safety for our guests and safety for our staff and safety for the community. That entails much more extensive training and updating than is possible with our pool of volunteers.”

The warming center has stocked up on KN95 masks for staff and disposable masks for the homeless seeking shelter for the night. A local company, P&L Johnson, donated a hospital-grade air purifier and filtration system, a generous gift that will further boost the warming center’s safety measures, Sullivan said.

There will be a coronavirus screening process as people enter the church basement, plexiglass barriers and, Bowers said, “hand sanitizer bottles everywhere.”

Instead of partaking in a group meal side by side at long tables, people will take their food to their individual mats to eat. Total capacity per night will dip from 30 people to 27 people to accommodate the 6-foot distance required between sleeping areas.

“Obviously, safety is at the forefront of our minds — for our guests, our staff and our community,” Bowers said. “I think flexibility while following established policies, protocols (and) procedures is a top concern.”