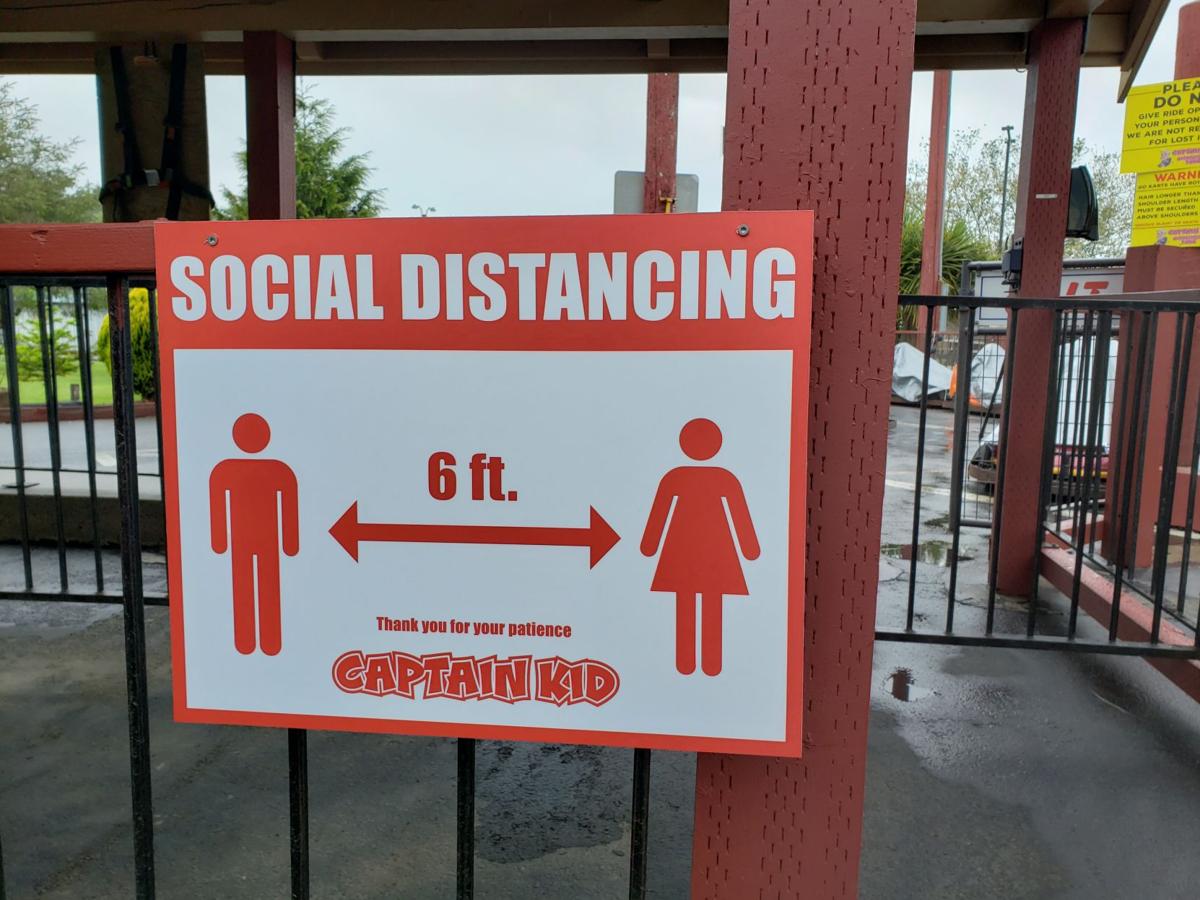 The Raths have posted signs throughout the amusement park to remind customers to social distance. 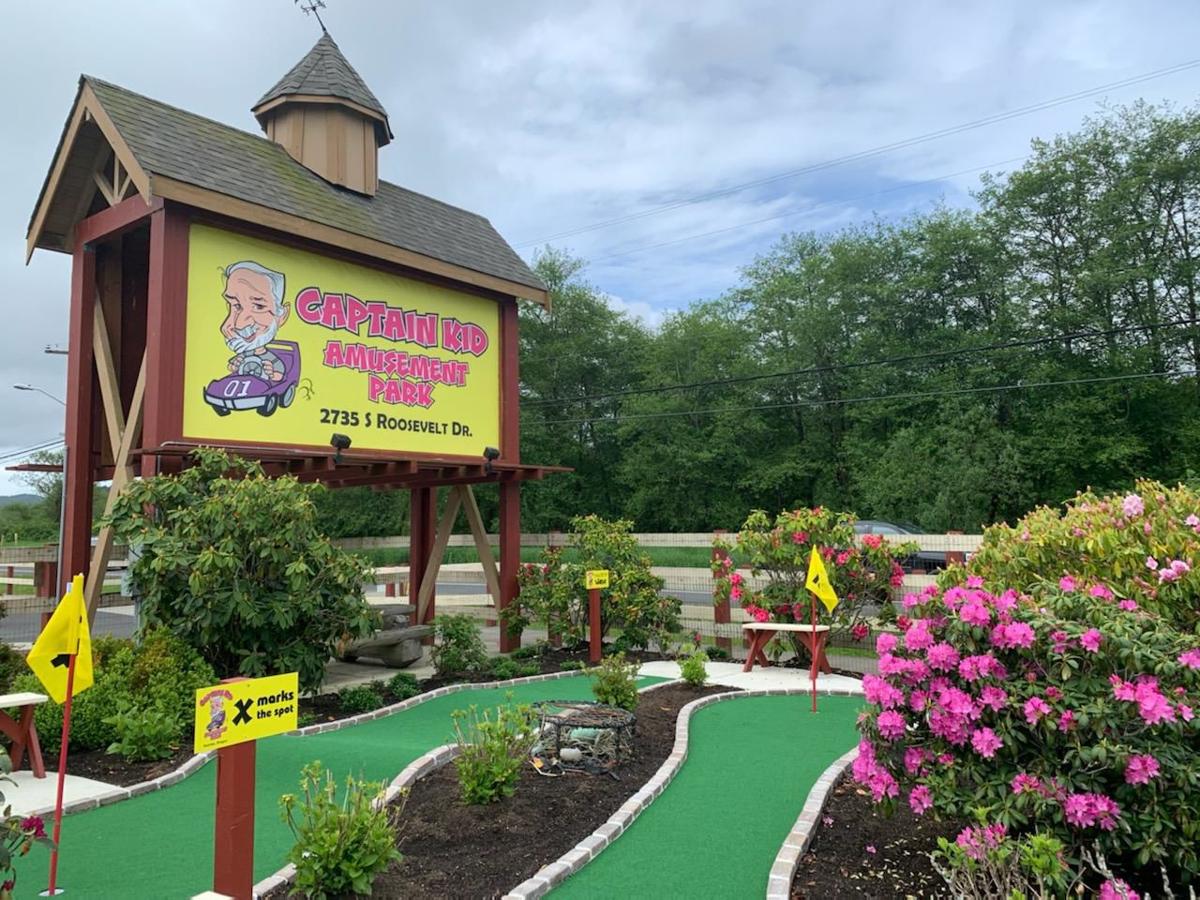 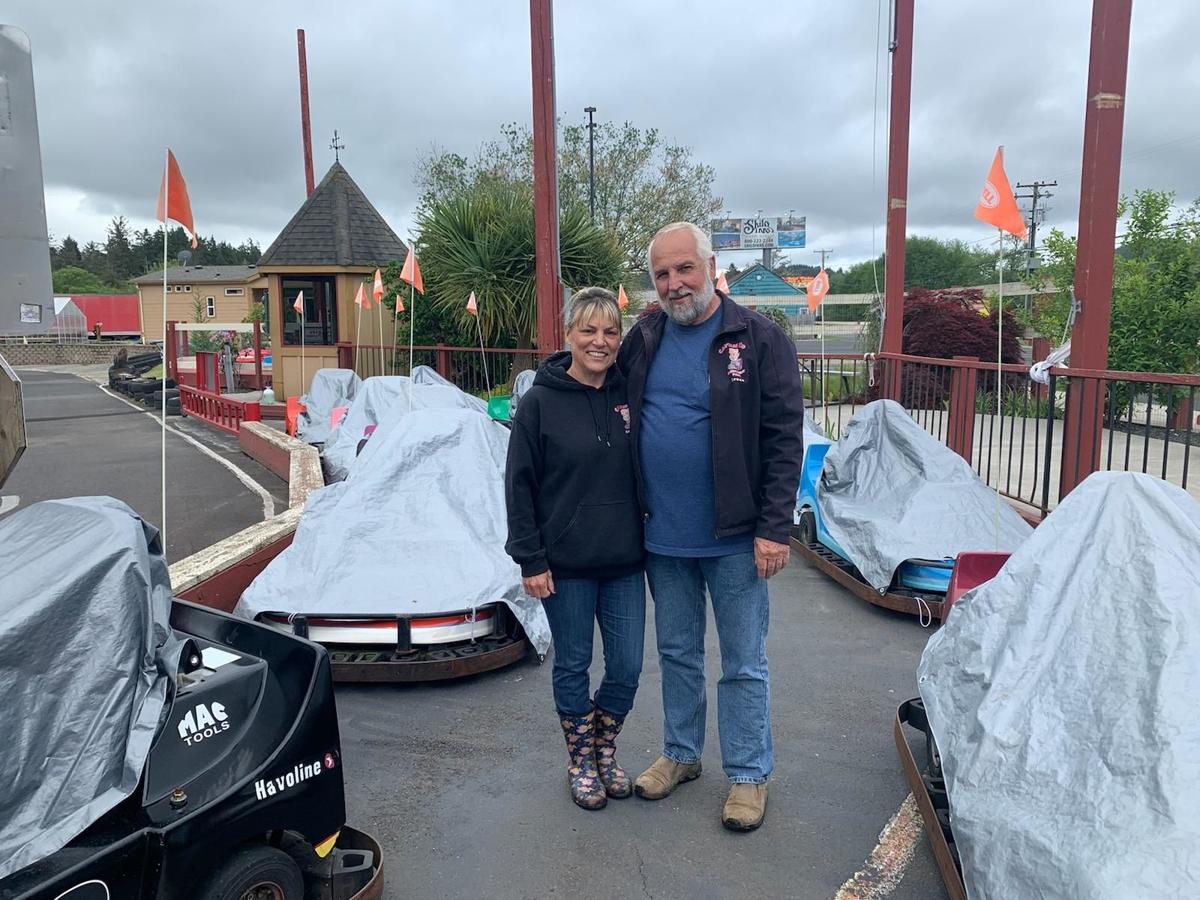 Tammi and Bruce Rath, the owners of Captain Kid, are in the process of building a new go-kart track.

SEASIDE — Bruce and Tammi Rath were eagerly planning to reopen Captain Kid Amusement Park over the weekend after being closed since March because of the coronavirus.

The couple decided to hold off a little bit longer, though, to see if they will get guidance from the state.

Amusement parks are not expected to reopen until after phase one of Gov. Kate Brown’s framework to restart the economy, and perhaps not until after phase two. The Raths say they want to comply, but they believe they can operate safely with a maximum of 25 people in the park during phase one.

“We are not your typical Disneyland,” Tammi Rath told state officials during a regional town hall organized online by state Rep. Tiffiny Mitchell in early May.

“We are a small, family-owned business. We get maybe 50 people at a time in here, can easily social distance people. If we get lumped in with amusement parks, we are in deep trouble. We cannot wait until September. We have had zero help from any government agency — no loans, no nothing. This is very extreme for us right now. We have no income — none.

“We are floundering out here and we are trying to do the right thing … but what are we supposed to do as a business that is just going down?”

Rath said she has been in communication with Mitchell and Seaside City Councilor Tita Montero since the town hall.

Montero requested a plan in writing for how Captain Kid plans to reopen safely. She said she feels reassured by the plan and believes the problem has to do with how the business is categorized by the state.

“And I’d be concerned that there is a ‘no’ coming out of Salem from people that don’t have a full understanding of the situation, the type of business and the type of controls that these people can put on their business,” Montero said.

“It is wise to leave it to local control because we understand the business, we understand what the business owners are doing to maintain safe and sanitary areas. Because there’s no businessperson who wants to either get the employees or their customers sick,” she said.

Mitchell, D-Astoria, said she forwarded the Raths’ plan to the governor’s office so the state could potentially use some of the ideas in guidance for businesses like Captain Kid.

“I hope they can reopen soon, because I want for all of our small businesses to be able to come back and be successful,” Mitchell said in an email.

“That said, I also know that we need to be cautious, and I would not want any of these businesses to rush to reopen in a way that would potentially put them at risk for violating the governor’s orders and jeopardize safety. I appreciate their willingness to do what is right for the community to ensure that when we reopen, we do so in a way that promotes the health and safety of everyone.”

The Raths said they don’t understand why box stores were allowed to stay open but small businesses were asked to close. They also feel like they have a disadvantage compared to larger corporations in receiving a loan.

Some recreational businesses in Seaside, including Funland Arcade, have already opened. But the Raths are still waiting to hear when they can open. Bruce Rath said it feels unfair.

“They don’t have time to fool with us,” he said. “It just puts a hardship on us that we can’t work for a year.”

The financial crisis the Raths are facing is not new to Tammi Rath.

She used to own a restaurant called Jebino’s in Eatonville, Washington, with her late husband, John Bratholm.

They lost their restaurant and their home after the Great Recession and struggled for years to recover financially. She said the hardship led to her husband committing suicide in 2018.

“I’m very sensitive to what can happen when people get desperate and depressed,” she said. “We were in debt with the state, taxes — he was just done.”

She married Bruce Rath, her longtime friend, in December.

Bruce Rath was also from Eatonville, but he moved to Seaside in 2008 after his late wife, Patty, encouraged him to buy the park and fulfill his dream of owning an amusement park. They had been married for 44 years when she died in 2015.

The couple supported each other through the loss of their spouses and began investing in the park.

“I’m trying to keep my spirits up and do what’s right, but I just don’t know what they want us to do,” Tammi Rath said.

OPEN! Just open! Don't wait for dictator brown to say it's okay. A judge just struck her orders down. It's horrible what she has done to small businesses. Hopefully people will learn from this and make a better choice on who they vote for. I wish you the best!