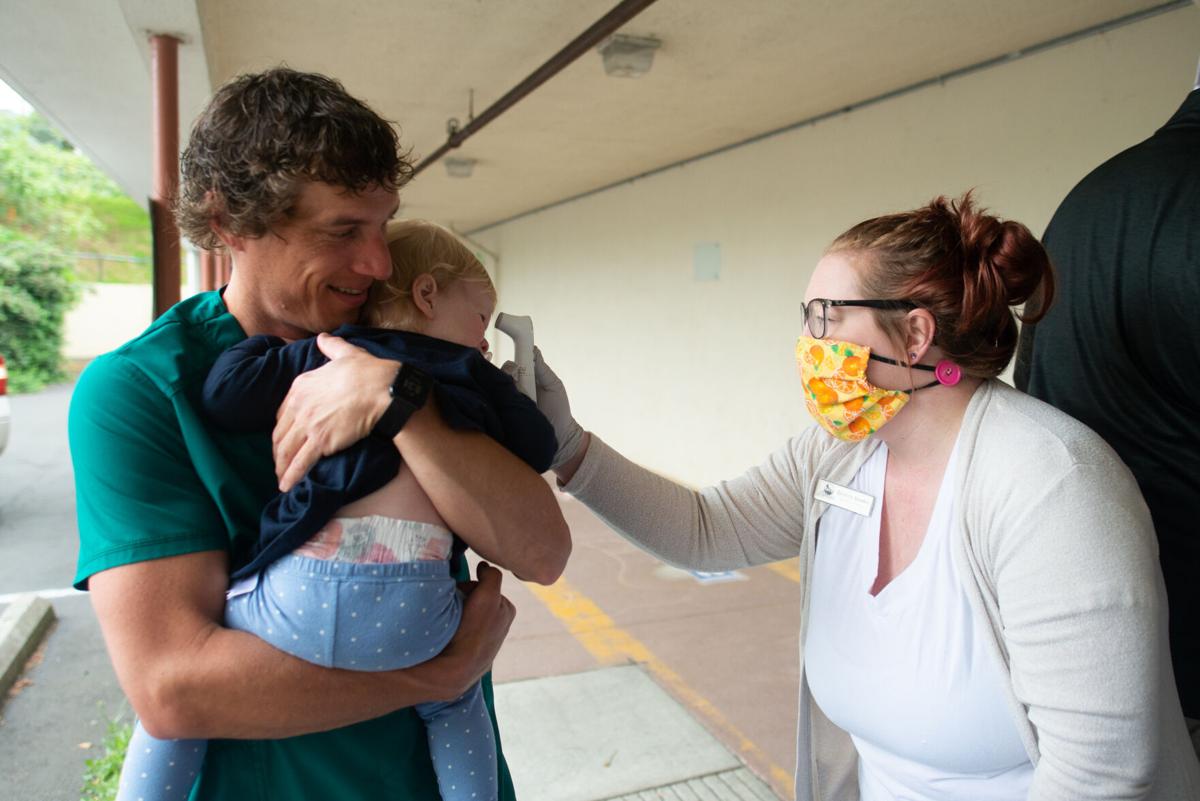 Brianna Bowker, the recreation manager for the Astoria Parks and Recreation Department, takes Quinn Hollowell's temperature as her dad, Terry, drops her off at Lil' Sprouts Academy. 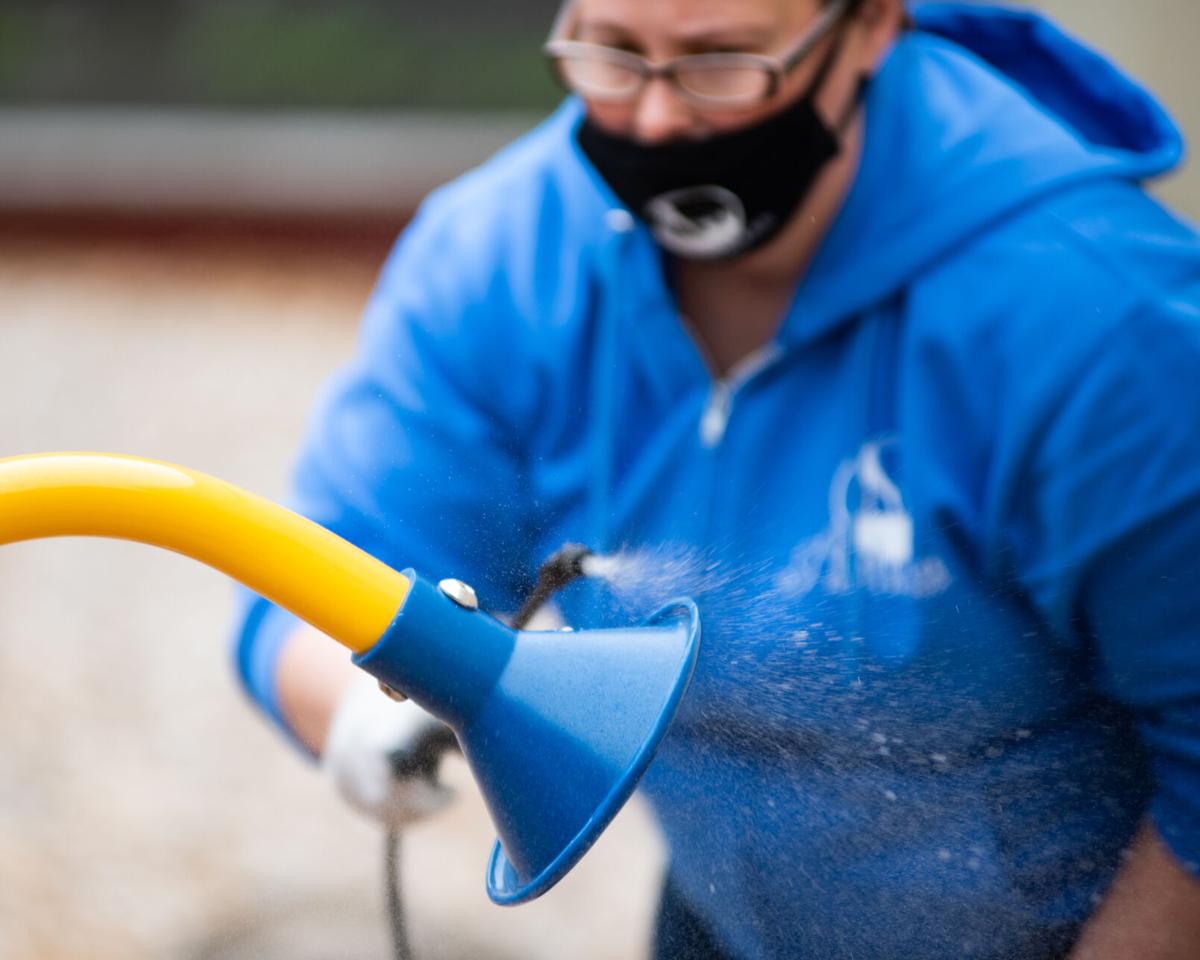 Last year, a study found that every county in Oregon lacked sufficient child care — they were “deserts.”

Now, this landscape is even more barren because of the coronavirus pandemic.

Eva Manderson, the director of Northwest Regional Child Care Resource and Referral, tried to think of a way to describe the new environment.

“We had a small desert but now we have a larger desert? The dunes are taller? I don’t know.”

“It was so hard before,” she said. “Now in some places, the care that was available has kind of been decimated by the worries and the virus itself, and those are separate and connected.”

Before the coronavirus, Clatsop County had 12 certified child care centers. Only five have reopened.

New operational procedures, increased costs, new staffing needs, limits on the number of children allowed in a facility at a time and other restrictions made it difficult for some places to reopen. Other providers, weighing the risk of exposure against existing health concerns or an impending retirement date, opted to stay closed.

Shifting requirements and guidelines — a new rule requiring children 5 years and older to wear masks went into effect Friday — continue to keep providers on their toes. Some told The Astorian they felt the ever-changing rules and higher costs would drive them out of business.

Across the spectrum of child care offerings — from licensed to exempt, from home operations to centers — Clatsop County has only about half of its providers open and operational, according to data provided by Northwest Regional Child Care Resource and Referral.

This does not mean capacity has also gone down by half, Manderson clarified. Some smaller operations — which tend to form the base of child care — have reopened and can provide care for the same number of children as before while still following state guidelines.

Still, the hit to day care options overall is significant and presents a barrier to parents who may be returning to work or navigating a work-from-home situation while also caring for children, Manderson said.

Providers and parents alike are looking ahead to September. How schools plan to reopen will affect the child care dynamic for many.

The Astoria School District announced Thursday that it will offer remote learning only for the start of the school year. Most other Clatsop County school districts are planning a hybrid model where children are in school several days a week and working from home the rest of the time.

“That creates a need for child care the three days your kid is not in school,” Manderson said of the hybrid models, “and I don’t know our communities have child care available to fill that need.”

Parents are already desperate for care.

Tami Williams, the owner of Mrs. Tami’s Daycare and Preschool in Seaside, recorded a new answering machine message to deal with the growing number of calls she was receiving each day. The center cannot take any more children right now, she said.

Before the coronavirus, she was able to have up to 49 children in the center at a time, which translated to about 70 children enrolled on a daily basis, coming and going on different schedules.

Now she is limited to 22 children, split into stable groups and with the older children separate from the infants.

Williams has reordered her open-concept space, moving a shelf and installing a gate to create distinct areas.

If a child from one group arrives in the morning, followed by a child from a different group, Williams can’t just handle them with one employee. She needs staff to oversee each group. Only a few staff members are designated to float between groups.

“I’m physically, literally going in the hole being open, but I have so many essential workers (as clients) that I feel like I need to stay open for them,” Williams said.

Reopening is likely hardest on centers, Manderson said. Their profitability depends on serving a higher number of children. Her organization is looking to recruit more small, licensed providers.

“I think for child care we’re just trying to think about how we get more people reopened and how we recruit new providers while being mindful that families might want something different than before,” Manderson said.

The city-run Lil’ Sprouts Academy in Astoria just returned to a version of normal operations in June, but the number of children it can serve has dropped from 60 to about 42. Some families who had children enrolled at Lil’ Sprouts are now back on waitlists as the center continues to provide emergency care slots to essential workers.

It remains a challenge to break children into stable cohorts and then figure out how to staff those groups. The center has winnowed out toys that are harder to keep sanitized or that are especially attractive as chew toys to younger children.

Overall operations feel stable and sustainable, said Jonah Dart-McLean, the city’s parks director. Still, little costs are starting to add up, he said. Material costs have increased by 15% or 20%, if not more. They are buying more single-use items.

Denise Giliga, who operates Astoria Playhouse Preschool, a smaller version of the Shooting Stars Child Development Center she ran until earlier this year in Uniontown, has always operated with a waitlist. It was long even before the coronavirus arrived.

But now, she said, “I think the desperation of parents is a bit more forceful. They say, ‘I’ll put money down!’”

Though it was a hard call to close Shooting Stars’ doors and scale back services at the end of February, Giliga now says it happened at the perfect time.

“Not for the community and not for child care, but I couldn’t imagine surviving on that overhead,” she said.

Jeri Normandin, who runs Jeri’s Starfish Minis In-Home Daycare, a small day care in Astoria, said the ever-changing state rules are difficult to navigate. She has lost a lot of money in the past few months due to downsizing.

But she didn’t hesitate to register as an emergency day care.

The business helps pay the bills, it is work she is passionate about and she was already serving many families who are essential workers: police officers, hospital workers, military families.

“If they don’t have day care then they can’t help other people out in the community either,” she said.

Right now, she is figuring out how Oregon’s new mask rule for younger children will work in practice. She has around eight children 5 years and older who will likely need to wear masks.

It can be a tricky balance to both follow public safety guidelines and ensure children’s emotional and social needs are met, providers said. After all, one of the first things many younger children want to do when a masked caregiver is near is pull their mask off their face, a new spin on peekaboo. Older kids in one room want to know why they can’t go visit a baby sibling in another room.

But for the most part, kids have carried on like always, providers said.

“They’ve done really, really well,” Williams said. “Seeing us with a mask on scares the babies but they’ve gotten used to it. They can see us smiling with our eyes.”

Sometimes, when children first arrive, she will step back and pull her mask down quickly just to show them her face before she puts it back in place.

“They’ve come to realize we’re still the same person underneath there.”