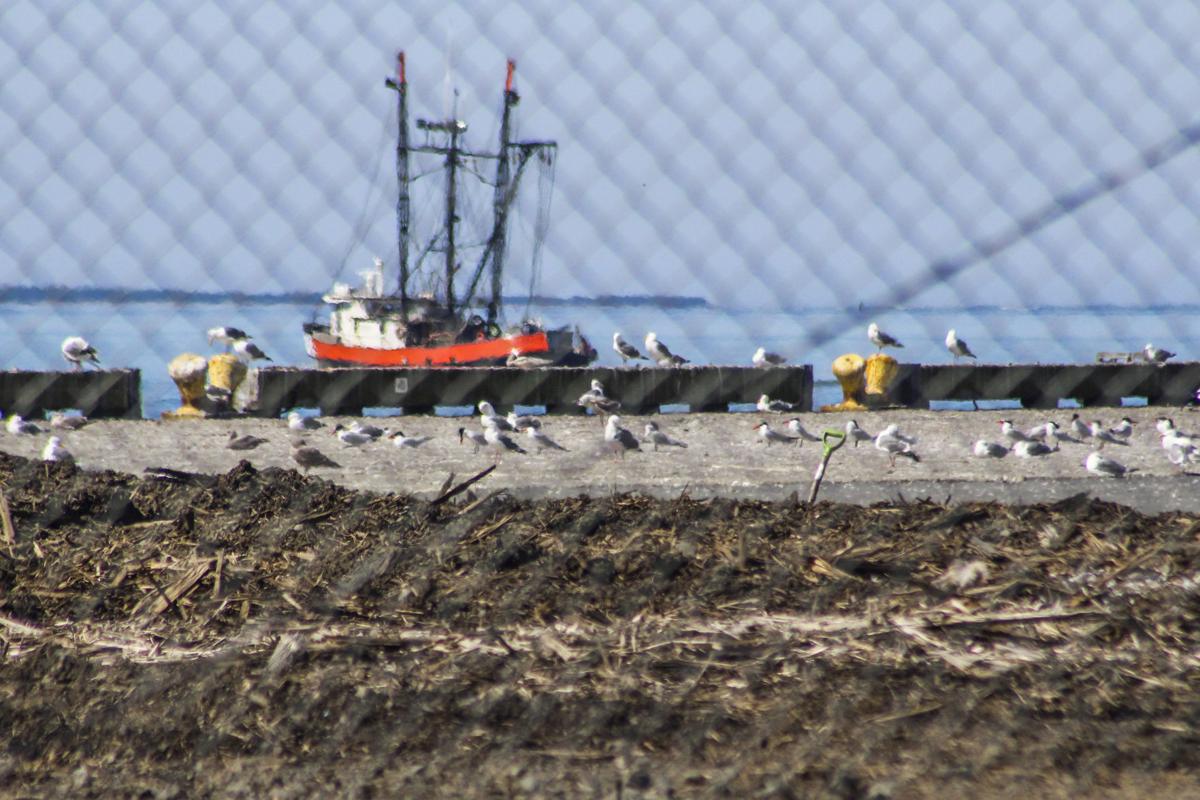 Seagulls lounge on the dock at Pier 1, where the Port of Astoria has lost all log and cruise ship revenue to a trade war and a coronavirus pandemic. 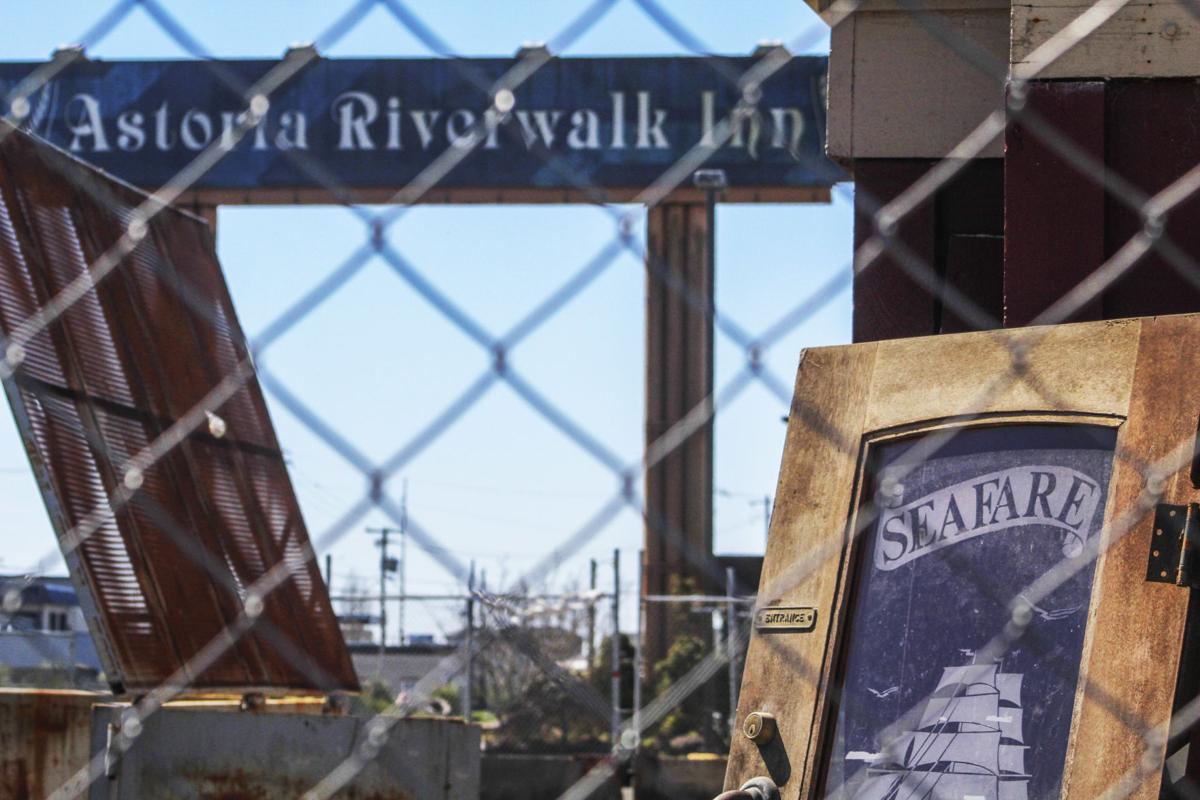 The Port of Astoria is having staff remove items from the former Seafare Restaurant before demolition. The agency hopes to sell the Astoria Riverwalk Inn, Chinook Building and a building site at the restaurant for money to help fix crumbling infrastructure. 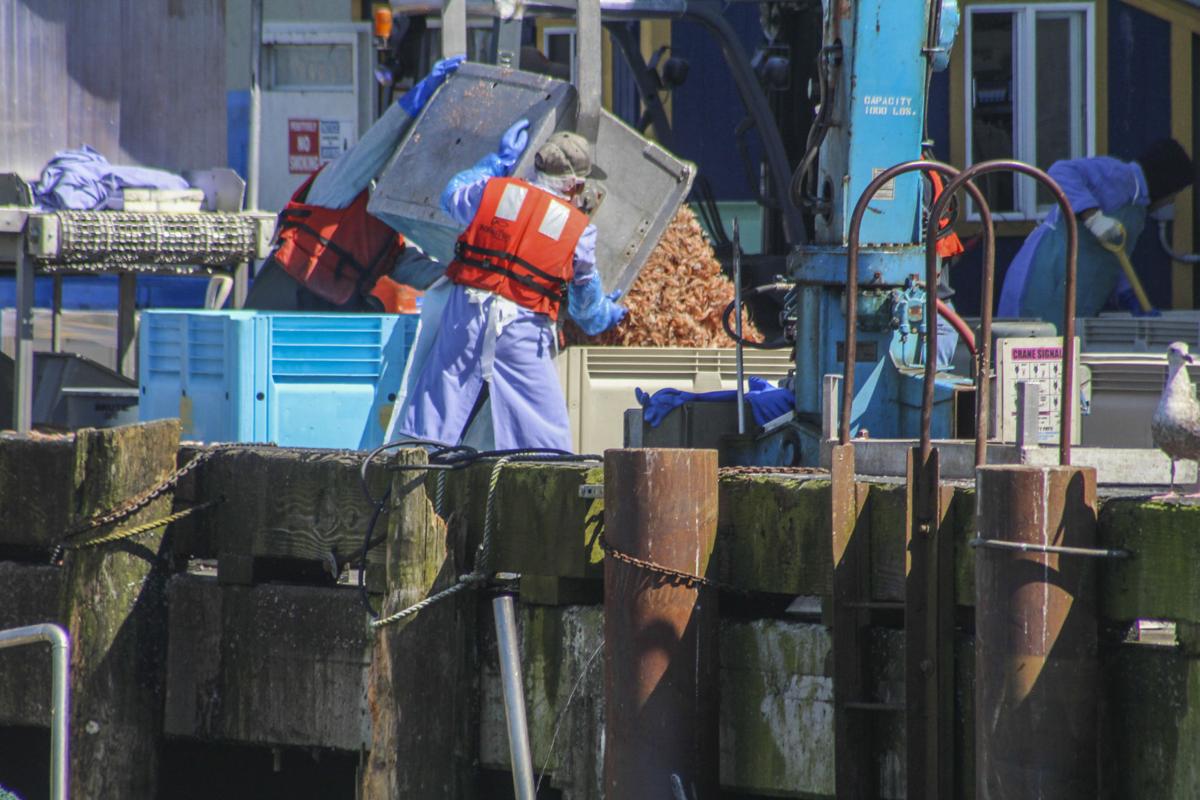 Workers at Bornstein Seafoods unload shrimp from the fishing vessel Capt. Ryan on Wednesday. Seafood processing is one of the few local businesses not yet heavily damaged by the coronavirus. 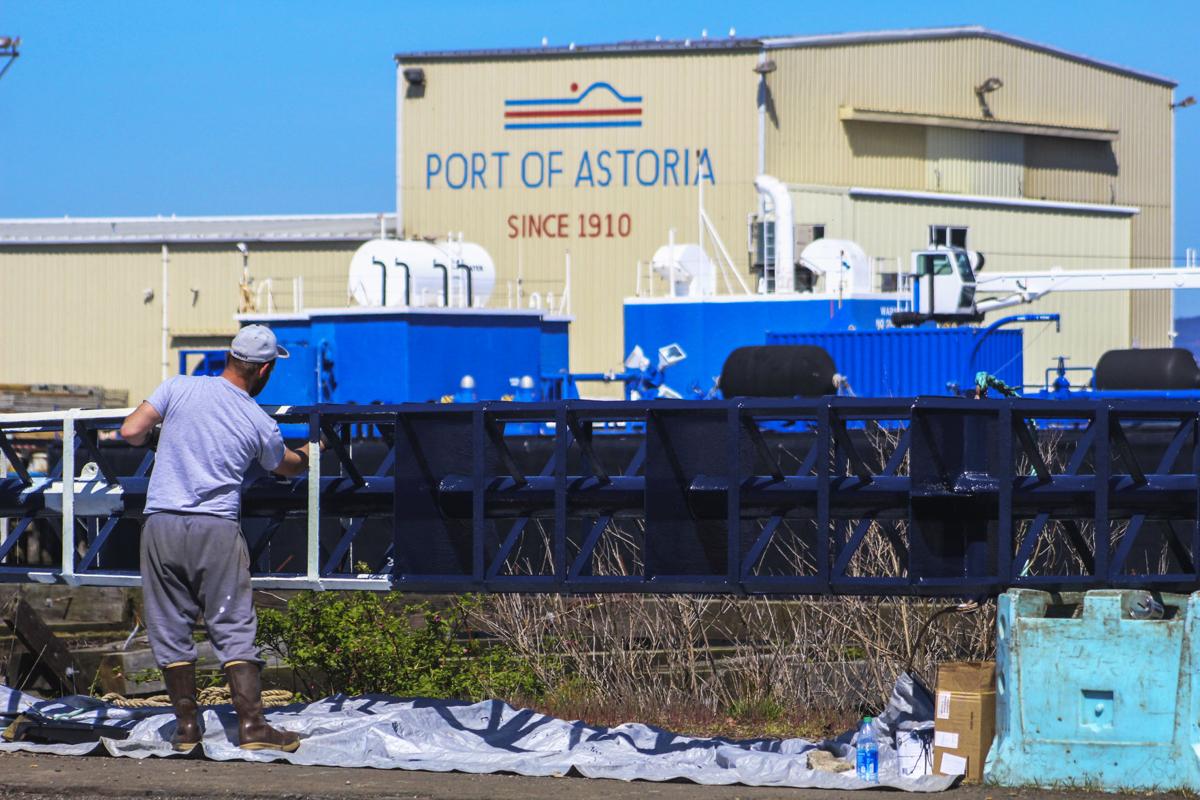 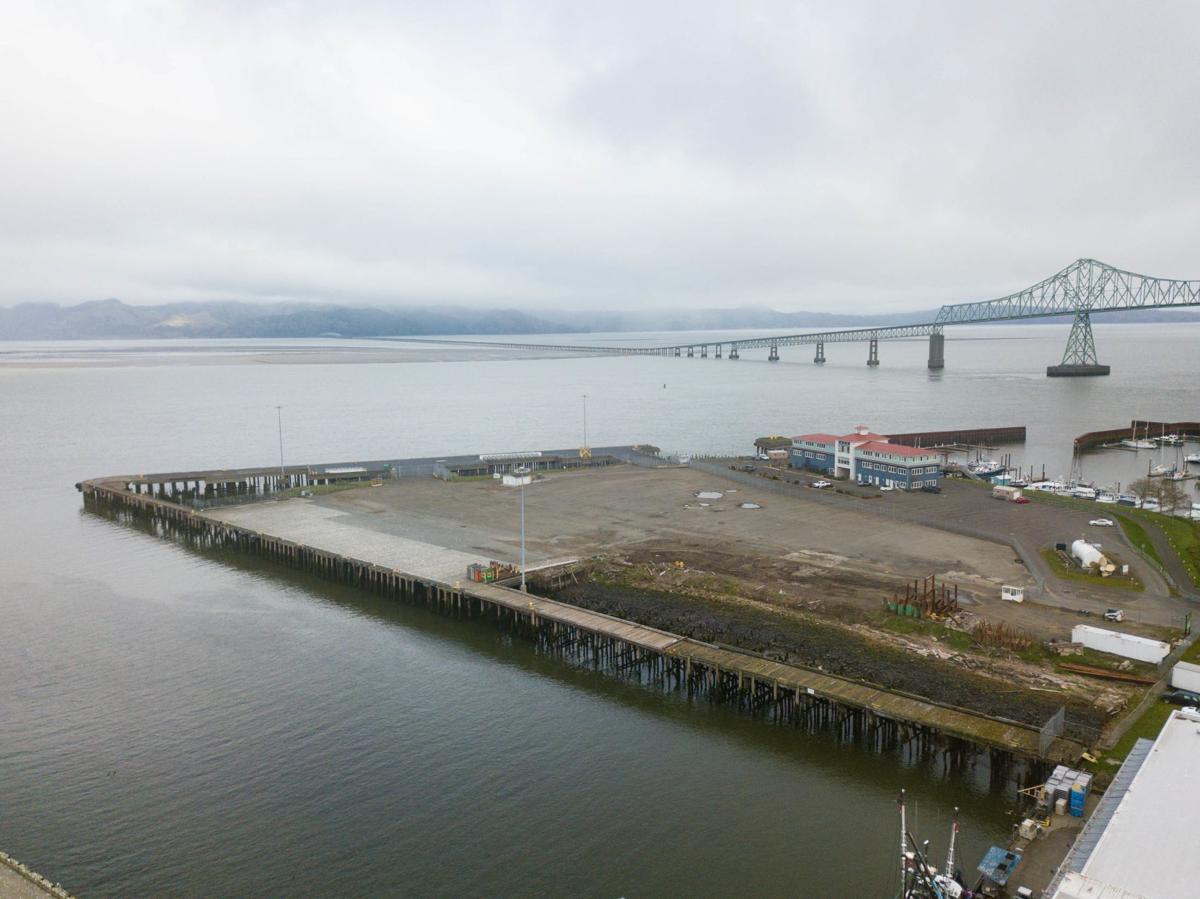 The Seafare Restaurant, sitting on Pier 1, will be demolished in the coming weeks.

Workers with the Port of Astoria have been slowly picking apart the Seafare Restaurant, a popular former gathering spot once featured in the 1990 film “Kindergarten Cop” that has rotted into an eyesore. Over the coming weeks, the Seafare will be demolished as the Port ponders selling buildings around the West Mooring Basin for money to fix docks.

Will Isom, the Port’s executive director, has focused on low-cost projects that benefit the agency and keep staff busy during a massive drop-off in business caused by the coronavirus.

The Port, lauded by the state for Isom’s frugal management, had already been coping with the loss of log exports to a trade war with China. Through February, the Port earned nearly $500,000 less from operations than expected. But the agency also lowered expenses by nearly $630,000, turning in an efficient performance Isom said is a testament to the staff’s hard work.

“I think that’s a huge success story, and it’s good to tell it now,” Isom said during a recent meeting of the Port Commission held via teleconference. “Because with what’s going on, and a loss of cruise ship revenue, this isn’t going to sustain through the end of the (fiscal) year” in June.

More than half of a record cruise ship season has been canceled, with no passenger-carrying ships allowed in Astoria until June at the earliest. Isom has spoken with cruise lines about bringing in vessels with skeleton crews needing a place to park, resupply or even be deconstructed to fit under bridges upriver on their way to dry dock in Portland.

Isom doesn’t expect major impacts from the coronavirus to hit the Port until this month, when it was expected to host eight cruise ships. Between now and the end of June, though, he estimates the Port will likely lose 30% of operating revenue — about $200,000 a month — from the loss of ships. He also expects a significant hit to fuel sales as recreational fishermen are told to stay home.

“I would be very surprised if we were up and running again at 100% capacity by the end of June,” he said. “I just don’t think that’s going to be a reality.”

The Port has so far avoided layoffs, Isom said, extending benefits through the month for any employee wanting to stay home on unpaid leave or vacation time. Other employees, especially those with children, have taken reduced hours and worked from home.

Almost all staff at the Astoria Riverwalk Inn has been laid off through May 18 as the company complies with Astoria’s short-term lodging ban, said Lenny Cheyney, the hotel’s manager. The only guests are a long-term transportation crew with NW Navigator Luxury Coaches.

Ganesh Sonpatki, a Portland hotelier who leases the building from the Port for $5,000 a month and 7% of gross profits, said he has asked for rent relief during the government restrictions. He has also applied for the federal Paycheck Protection Program meant to help keep people employed.

The Port has not offered the hotelier rent relief. Isom argued that most of Sonpatki’s savings come from not having any gross profits to pay the Port.

Bornstein and Da Yang seafood companies, which employ hundreds of people processing, freezing and shipping catch on Pier 2, have so far kept operating while taking steps such as increasing sanitation and enacting more social distancing.

Da Yang said it was checking workers’ temperatures, while Bornstein Seafoods indicated it had "equipment coming and will begin doing that shortly.”

“It is a constant concern and effort,” said Andrew Bornstein, co-owner of Bornstein Seafoods with his family. “We have installed partitions, spaced out lines, broken up lunch and dinner breaks to have less people in the lunchroom at a time.”

Commercial Dungeness crab prices were already hurt by China’s travel restrictions and ban of live-animal imports during the coronavirus outbreak.

Chih Yuan Wang, the president and CEO of Da Yang, a company with deep ties to Asia, sees a tough year ahead for all seafood processors with international markets extremely slow and the restaurant business nonexistent.

More than two-thirds of seafood consumed in the U.S. before coronavirus restrictions was in restaurants, Bornstein said.

“The uptick in grocery has not made up for that at all,” Bornstein said. “Sales are down quite a bit.”

Kurt Englund, the president and co-owner of Englund Marine & Industrial Supply, said his sales are down significantly, but that his industrial and commercial fishing customers are still buying equipment. Getting supplies from the Midwest and East Coast has also become more difficult, he said.

With its connections, Englund Marine has been one of the few local distributors of safety glasses, face shields, respirators, N95 face masks and other protective equipment. Whenever something comes in, the company first reaches out to local hospitals, Englund said.

“The N95 masks and respirators, those went pretty fast, right away,” he said.

Isom said he has heard from tenants across the Port’s different sectors seeking relief.

“The farther we get into this coronavirus situation, the more and more we’re hearing from tenants who have been impacted wanting some sort of relief or assistance, particularly with their leases,” he said. “However, a lot of those leases are tied to debts we have through Business Oregon.”

In a bit of relief, Isom said, the Federal Aviation Administration has announced that its grants, which fund most work at the Astoria Regional Airport in Warrenton, will be 100% federally funded under the Coronavirus Aid, Relief, and Economic Security Act. The announcement saved the Port $233,000 in local match money on a recent grant. It will return another $150,000 to the state for help with local matches.

Isom has been in contact with Business Oregon, the state’s economic development agency and a major lender to the Port.

Stephanie Prybyl, the ports manager for the agency, said she has heard from boat owners, airports, cruise ship companies, food processors, RV parks and others seeking rent relief from Oregon ports. The state will soon announce new payment relief options for its borrowers, including ports, she said.

“Up to this point, Business Oregon has encouraged ports to document and quantify impacts, to ensure ports would be in the best position to apply for available resources as legislative measures are enacted and implementation announcements are made,” Prybyl said.

These are “difficult and unusual times for the Port of Astoria,” Rohne said. “I am confident that our executive director and staff are working diligently to address every challenge this coronavirus pandemic has created for the Port, as well as working to address outstanding issues and even improve the Port’s position for the future.”