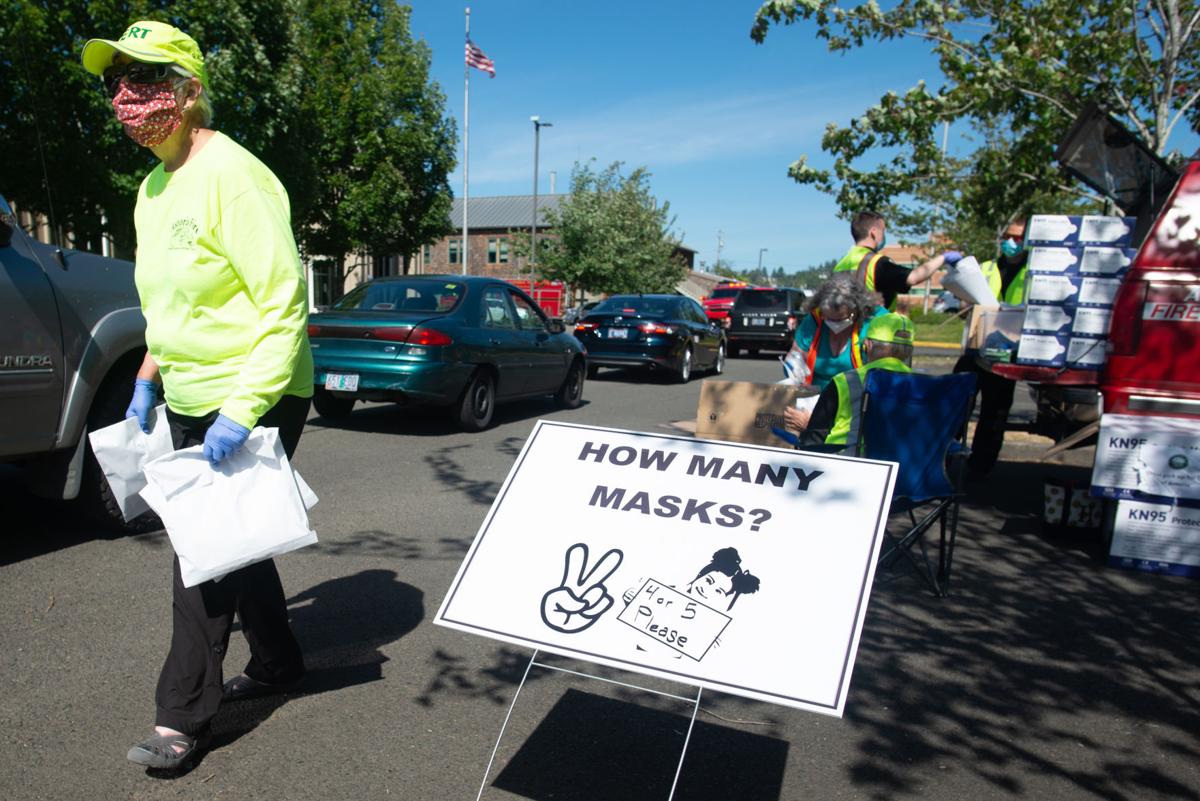 Drivers passed by the Astoria Aquatic Center on Thursday afternoon and signalled to volunteers and firefighters the number of masks they needed. 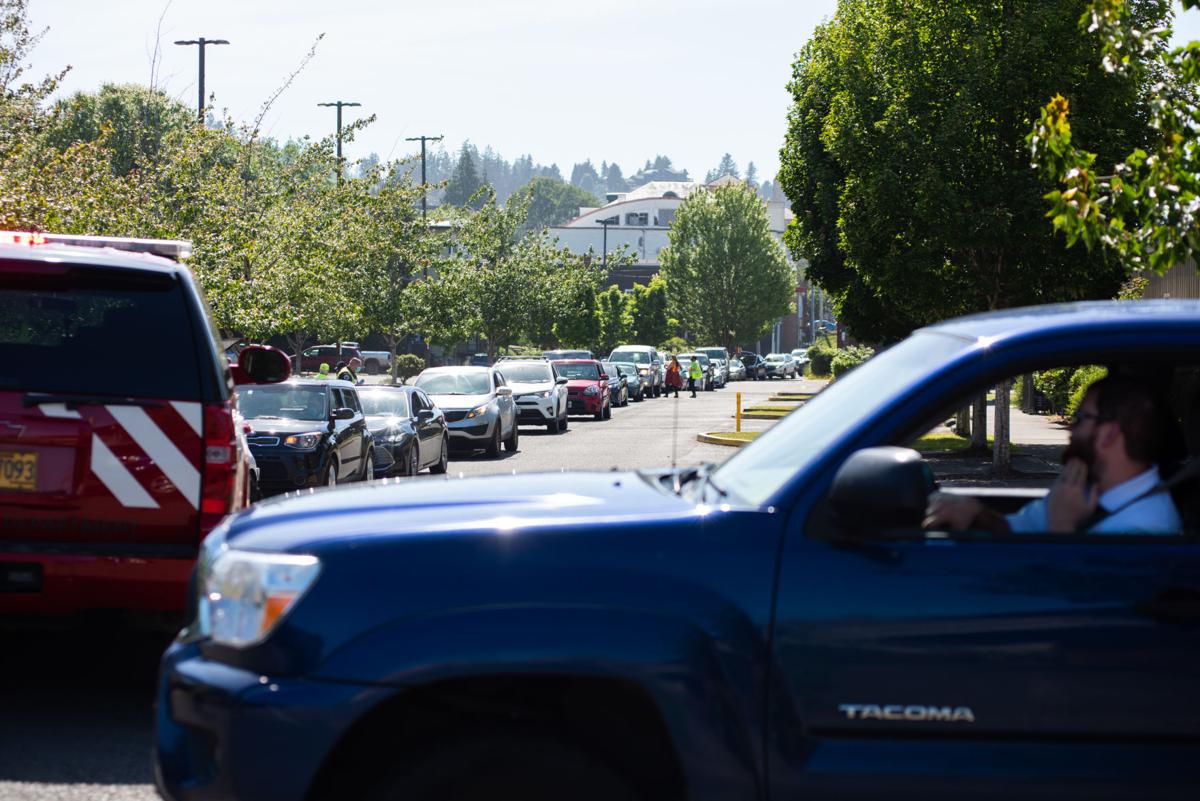 People in cars lined up for free masks outside the Astoria Aquatic Center. 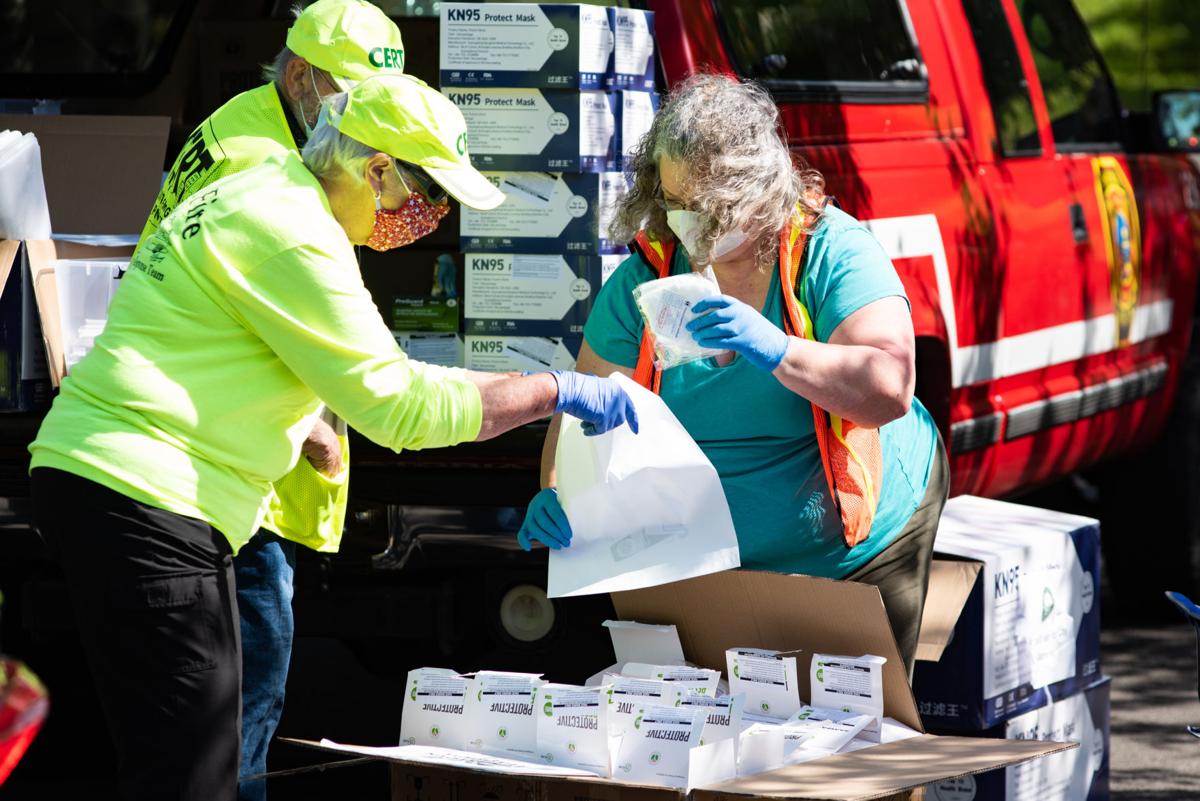 Volunteers put KN95 masks in bags with information on how to properly wear them.

Clatsop County will require people to wear masks at stores and other indoor public spaces to help contain the spread of the coronavirus.

The county Board of Commissioners voted unanimously Wednesday night to opt in to a mask requirement announced last week by Gov. Kate Brown for seven Oregon counties.

As of Wednesday, people in the state’s three largest counties by population — Multnomah, Washington and Clackamas — along with Hood River, Lincoln, Marion and Polk are required to wear masks in indoor public spaces like grocery stores, retail shops and restaurants and bars when not eating or drinking.

Brown did not include counties with lower infection rates, but gave counties the ability to opt in to the requirement.

Oregon is one of several states to see a surge in virus cases since travel, social gathering and other government restrictions began to loosen. Washington state required people to wear masks in public as of Friday.

Public health experts believe people can help reduce the spread of the virus by wearing masks.

Astoria and Cannon Beach unanimously passed motions this week asking the county to opt in to the mask requirement. Seaside Mayor Jay Barber and Gearhart Mayor Matt Brown also expressed their support to the county.

“Fifty percent saying ‘no,’ they would rather not have a requirement, (that) it should be a choice. And they don’t really feel comfortable having government tell them to wear a mask,” he said. “And the other 50%, who basically just say a lot of people have been wearing them voluntarily, but there are others who are not. And they just feel to control the virus, wearing a mask would be prudent. And so they’re just asking for messaging that it is required.”

People with medical conditions or disabilities that prevent them from wearing face coverings are exempt from the mask requirement, along with children under 12 years old and people who are exercising at gyms.

Matt Stanley, the general manager of the Astoria Co+op, which already requires customers to wear masks, urged the county to require masks and take the onus off businesses.

“I think the majority of people who live here and in the country want this to be mandated,” he said. “Unfortunately, there is a very vocal minority that makes it seem like there’s more people who don’t want it. That really isn’t the case.

“People want to be able to get back to as much of a normal life as possible and masks — the facts and the evidence are increasingly showing — allow us to do that with relative safety. But you have to have a critical mass of people wearing them or it doesn’t work.”

Stanley said the co-op has had pretty good compliance, but that a county requirement would help. He said the county will have to advertise clearly and figure out a way to enforce the mandate, particularly at some larger businesses.

There has been a significant local push for masks over the past few weeks.

More than 500 people signed a petition started last Saturday by Sarah Jane Bardy, the owner of Eleventh Street Barber in Astoria, asking the county and Astoria to require masks.

“The trouble is, the majority of these folks — many of them tourists, are not wearing masks,” Bardy wrote.

“When parts of the state are still closed, restricted, and requiring masks be worn, it’s no wonder people are flocking here. Though their tourist dollars come at a crucial time for small businesses, it is putting our community at risk for an outbreak that our hospitals simply cannot handle.”