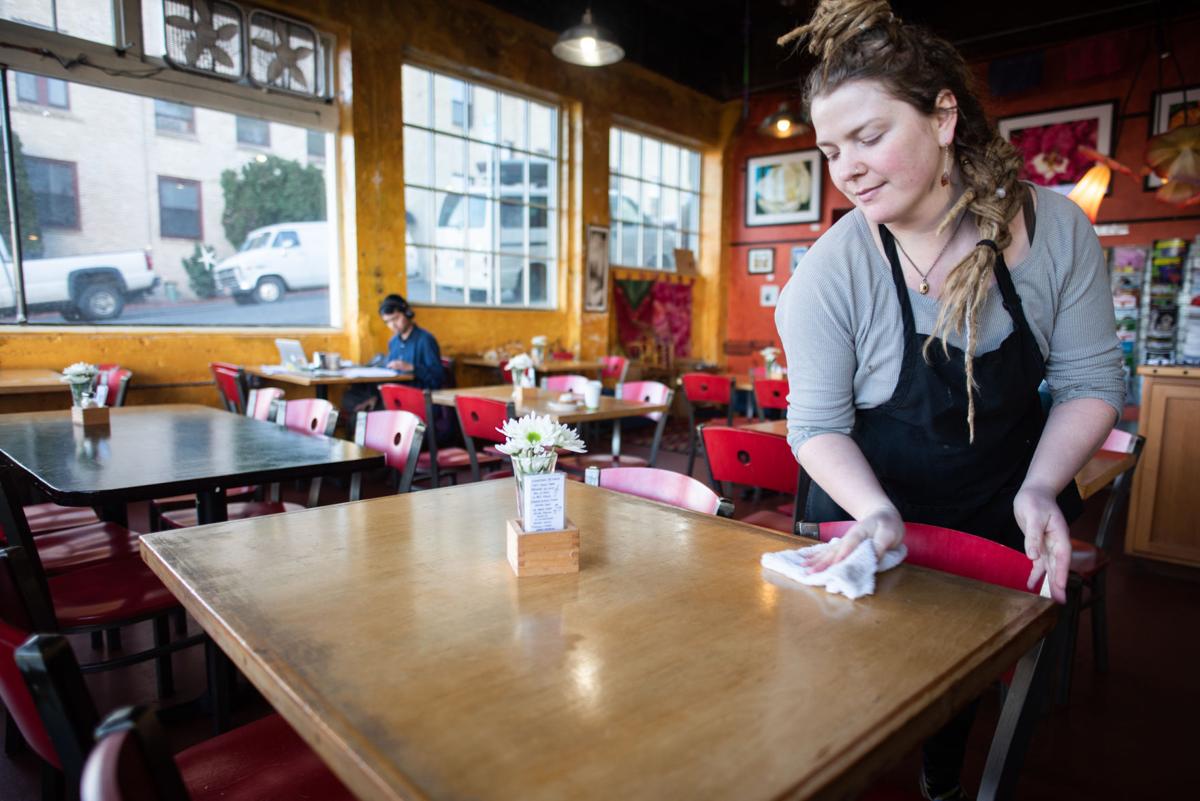 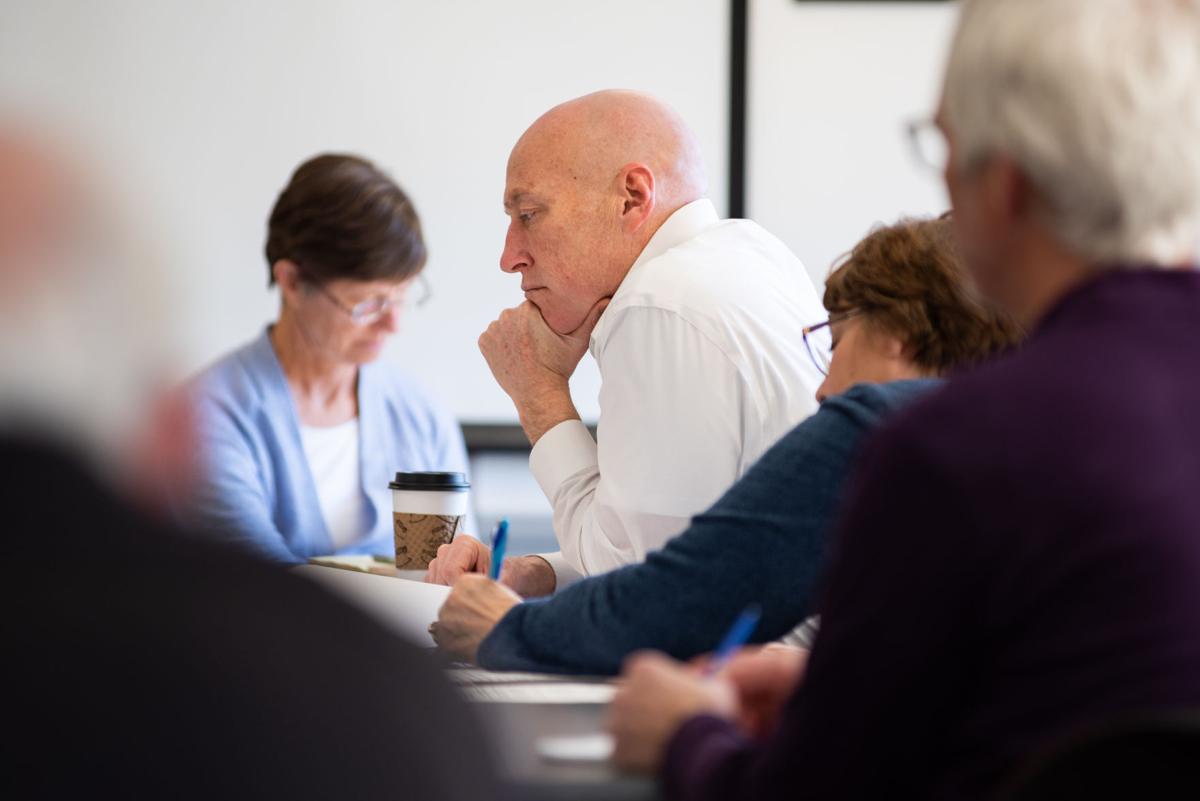 Clatsop County Manager Don Bohn at a meeting to declare an emergency over the coronavirus. 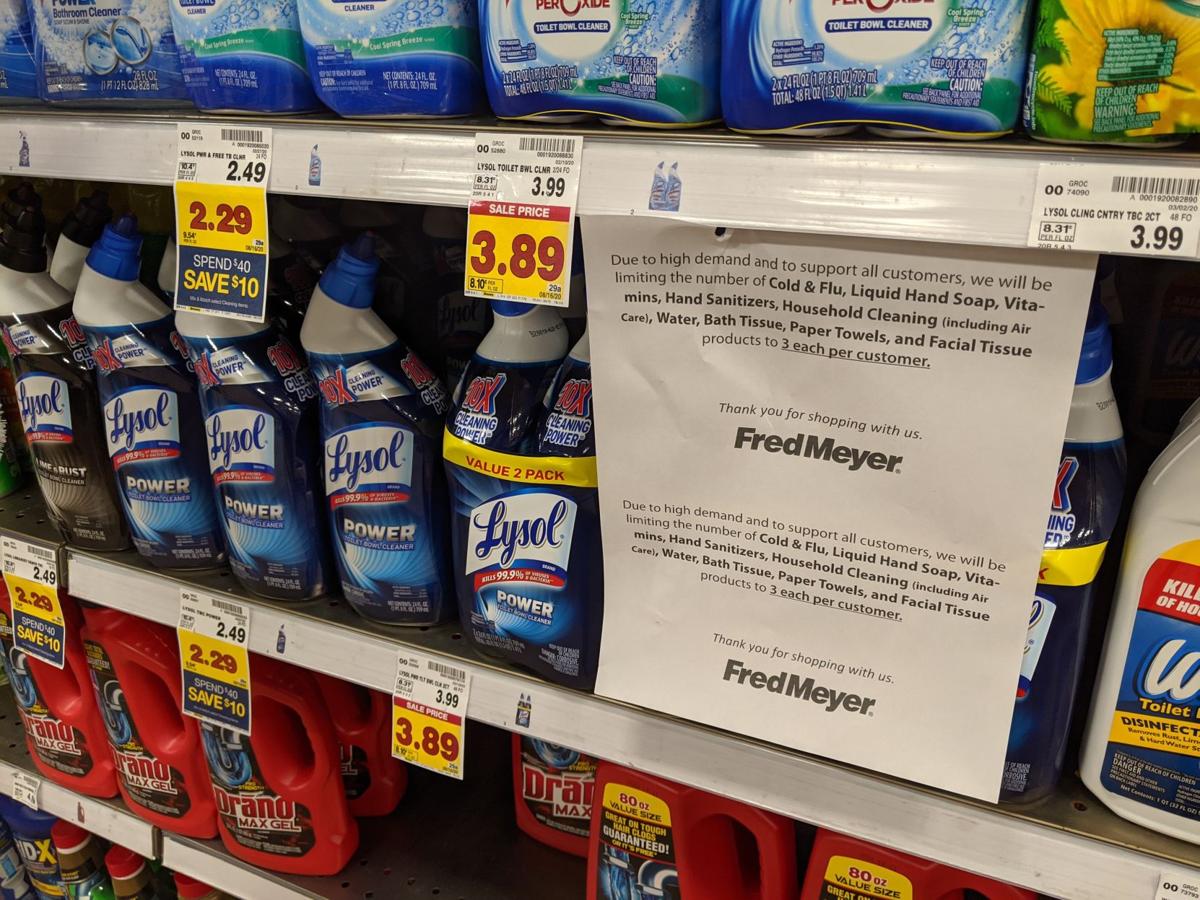 A sign at Fred Meyer in Warrenton restricting purchases by consumers. 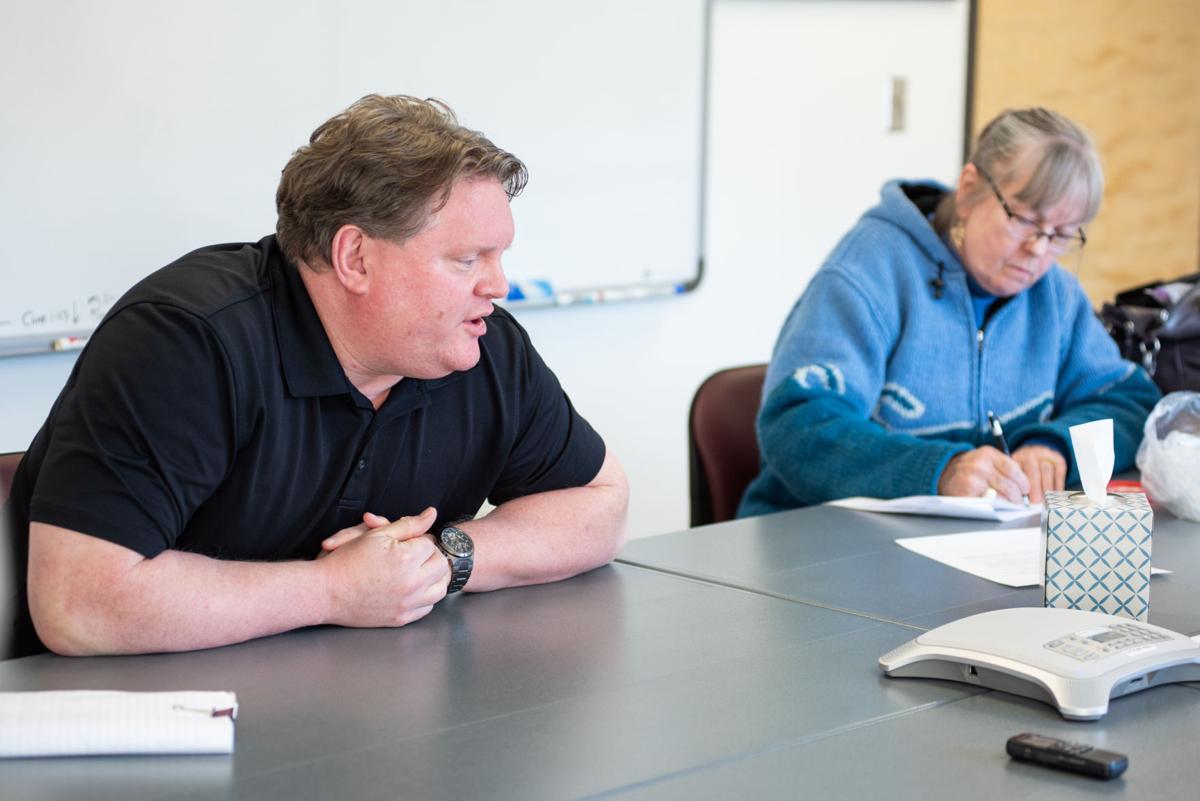 County Public Health Director Michael McNickle speaks at a meeting regarding measures to limit the spread of COVID-19.

Clatsop County declared an emergency over the coronavirus as the threat of an outbreak disrupted life on the North Coast.

The declaration, through May 1, enables the county to take emergency actions and helps qualify for state and federal aid to combat the spread of COVID-19. Emergency actions could involve curfews, limits on public gatherings, mutual aid agreements and redirection of county funds.

County Manager Don Bohn said “there’s a lot of coordinated muscle movement with this whole endeavor,” and that the county is taking direction from the Oregon Health Authority and the federal Centers for Disease Control and Prevention.

“We’re not only dealing with the broader public issues, we’re also dealing with how we want to conduct county business during this interim period,” Bohn said at a special session of the county Board of Commissioners on Monday afternoon.

“We’re looking at making some budget adjustments to get us through this interim period with the longer-term hope there will be some relief provided by the federal government and the state for some of the local expenditures that we are making.”

The county’s emergency declaration came after a wave of closures and cancellations over the past few days as the public health risk from the virus intensifies.

The Crab, Seafood & Wine Festival, one of the signature annual events on the North Coast, was canceled on Monday. The festival, a major fundraiser for the Astoria-Warrenton Area Chamber of Commerce and other community groups, was scheduled for late April at the Clatsop County Fairgrounds.

The chamber did not cancel the festival after Gov. Kate Brown last week ordered the end of large gatherings of over 250 people for four weeks to contain the spread of COVID-19, since it did not extend to the festival weekend on April 24 to April 26.

But the CDC on Sunday urged the cancellation of gatherings over 50 people for the next eight weeks. President Donald Trump went even further on Monday, urging people to avoid gatherings larger than 10 people and cancel discretionary travel.

Brown revised her order on large gatherings down to 25 people and urged residents to avoid gatherings of over 10 people.

The chamber said the festival will not be rescheduled.

“The festival is a major fundraiser for not only our organization, but dozens of others that participate in the event, as well as hundreds of small businesses from our vendors and performers to hotels, restaurants and shops in the region,” the chamber said in a statement on Monday. “By canceling this event now, we felt that everyone involved would have a better opportunity to mitigate lost income from the event rather than waiting until nearer to the event.

“We will make every effort to continue to support our business community during this economic slowdown and encourage you to join us. Thank you for your patience and support as we navigate this difficult situation together.”

More than 10,000 people regularly attend the festival, which can net the chamber about $100,000 a year and fill up hotel rooms throughout the region. The festival, held since 1982, draws tens of food, wine, beer and craft vendors.

The Clatsop County Fairgrounds suspended all events until April 10.

The announcement Monday followed decisions by other local institutions, including the Columbia River Maritime Museum and the Liberty Theatre, to close as precautions.

“Although it is not required at this time, the (historical society) is following health professionals’ advice to act with an abundance of caution and temporarily closing our doors to the public,” the historical society said in a statement.

The historical society also canceled or postponed all public programs and school tours for March.

The Columbia River Maritime Museum, one of the North Coast’s most popular tourist attractions, closed until further notice. The nonprofit Astoria museum, which had more than 115,000 visitors last year, made the decision to close to help ensure visitors did not contribute to the spread of COVID-19 and overwhelm the regional health care system.

“The prudent thing to do that’s looking out for the interests of the community and our own visitors and staff is to close to the public to reduce the instance of transmission of the virus,” Jones, the museum’s deputy director, said on Sunday.

“Everything we’ve read indicates that the virus is probably already in the community, or else it will be here very soon, and when it gets here it will spread rapidly from person to person.

“And we want to do our part, as a leading local institution, to remove ourselves from the transmission equation and try to slow down the spread of the virus.”

Jones said the decision to close was difficult. Admissions, store sales and 3D film tickets make up more than 65% of the museum’s annual revenue.

“It’s a very painful decision because, like most nonprofits, we rely on our visitation for our revenue,” he said. “But I think the Liberty Theatre did the responsible thing really early, and we’re trying to follow their lead and do the responsible thing and protect our guests and visitors and the community.”

Over the weekend, the Astoria Senior Center, the Astoria Aquatic Center, the Sunset Pool in Seaside, the Bob Chisholm Community Center and Seaside Youth Center announced closures. Astoria also closed Lil’ Sprouts Academy, the city’s day care, along with Port of Play and the Kids Zone at the Astoria Recreation Center. The Astoria Library closed on Monday.

“We feel it is better to be safe than sorry,” the senior center said in a statement on Saturday.

Astor Street Opry Company also announced on Monday that it has canceled performances of “The Real Lewis and Clark Story.”

Playwright Judith Niland said the play was ready to go. The theater had cut the number of seats to 58 to increase social distancing. But with the recommendations from the CDC against gatherings larger than 50, it wasn’t feasible to move forward with the show, she said.

“We can’t go against the CDC statement,” she said. “I do think the statement of 50 or less builds fear.”

Depending on how long the recommendation against large gatherings lasts, the play could go on after the moratorium or in a pop-up version during the summer. But any delay puts the nonprofit playhouse in danger, Niland said.

“That makes our future very shaky,” she said. “We can’t afford to close our door for two months.”

Canada, meanwhile, has suspended all cruise ship tourism until July, putting into doubt many West Coast cruises. Most cruise ships are registered to foreign governments and required by U.S. law to visit a foreign port before visiting more than one domestically.

Astoria, the county and the Port of Astoria agreed to cancel all cruise ship visits to Astoria through June 1.

“This decision is not taken lightly,” Jones, Commissioner Kathleen Sullivan, the chairwoman of the county Board of Commissioners, and Will Isom, the executive director of the Port, said in a statement. “Cruise ship visits provide a substantial portion of the Port’s annual revenue, funding critically needed facility maintenance. Cruise ship passengers bring needed revenue to many small business in Clatsop County.

“However, at this critical time of national and local crisis, it is important to lean forward together in the interest of public health and safety.”

Tongue Point Job Corps Center in Astoria also disclosed that more than 470 students are being sent home on what officials described as spring break.

The anticipated downturn in tourism and the loss of business from the rapid-fire closures of local attractions alarmed many merchants and workers.

Warrenton Mayor Henry Balensifer said Brown had a conference call with mayors and county commissioners Sunday night to get their input about closing bars and restaurants.

In a virtual mayor’s coffee on Monday, Balensifer said the overall message from mayors was to not close bars and restaurants, but instead add more common-sense regulations to keep them safe.

Michael McNickle, the county’s public health director, said he is in favor of a curfew and bar and restaurant closures. He said communities cannot only take “half-measures” if they want to stop the spread of the virus.

Street 14 Cafe in Astoria closed for the day on Monday.

At Three Cups Coffee under the Astoria Bridge, barista Elizabeth Morgan took orders on Monday like normal, but there was an undercurrent of anxiety. Limitations on what the coffee shop could serve — whether the making of espresso drinks would be considered too high risk since baristas touch multiple components of the espresso machine — worried her.

“I’m just going to keep on washing my hands,” she said, only half-jokingly.

At a table in the coffee shop, a group of seniors gathered over hot beverages. The only conversations were about the virus.

Todd Montgomery, who leads the hospitality management program at Oregon State University-Cascades in Bend, said businesses where people are in close interaction with each other — restaurants with limited seating, for example, or movie theaters and box hotels with rooms close together — may struggle to bring in customers.

Montgomery has over 23 years of experience in the travel industry and guided companies through past economic shocks, such as the SARS outbreak.

For now, he believes the best strategies for hospitality and tourism businesses, especially if they feel the worst could be over by April or May, is to invest in their employees: retrain where practical, look for ways to do business a little differently, retain employees as much as possible.

“You should be investing in your people,” Montgomery said. “You should make sure they still have livelihoods.”

Katie Frankowicz and Edward Stratton contributed to this report.

Clatsop County Emergency Management will be sending updates about the outbreak via Clatsop Alerts. People can text "CLATSOPCOVID" to 888777 to receive updates.