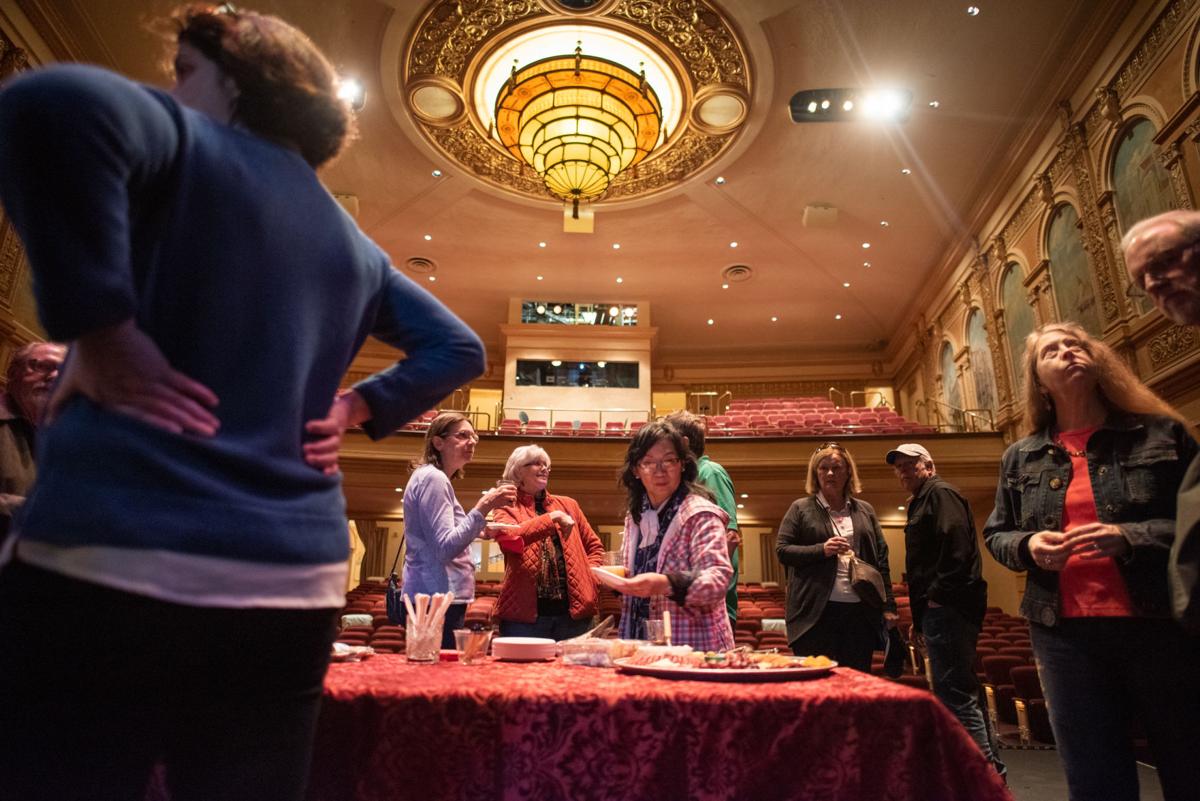 Visitors eat cheese and sip wine on the stage of the Liberty Theatre after touring the building this year. The theater will close through late April because of the coronavirus. 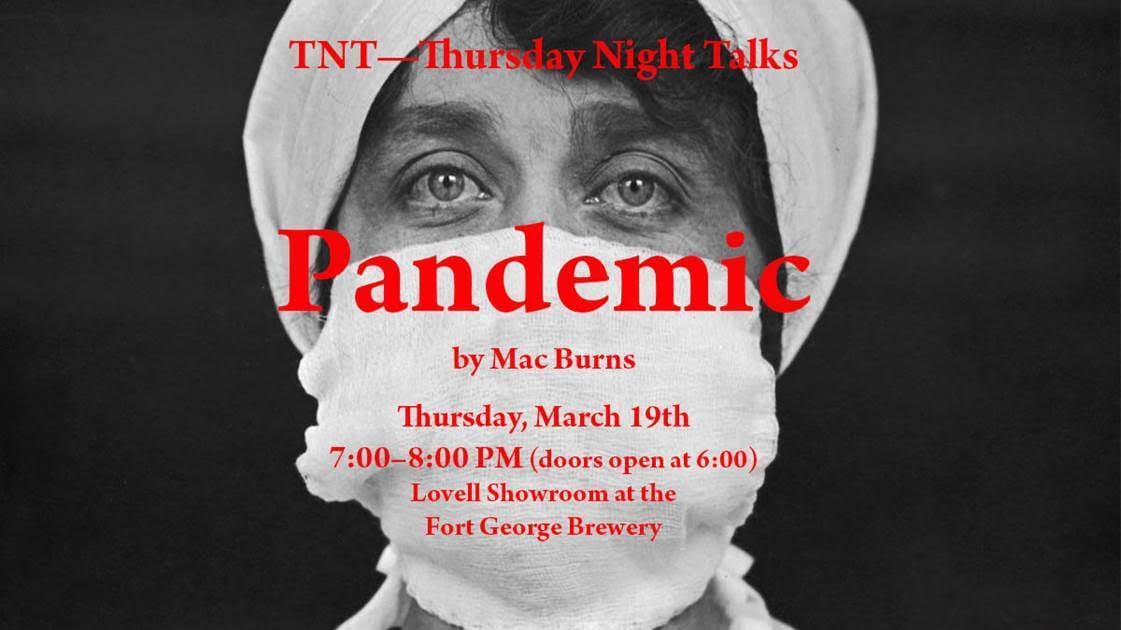 A lecture on pandemics at Fort George Brewery next week has been canceled because of the coronavirus.

The Liberty Theatre is going dark through late April. Events at the Seaside Civic and Convention Center are canceled. Community-based gatherings from Astoria to Cannon Beach are being called off or postponed.

Gov. Kate Brown’s order to cancel large gatherings over 250 people in Oregon for the next four weeks to slow the spread of the coronavirus brought the sting of the global pandemic to the North Coast.

“We have not seen anything like this in our lifetimes,” the governor told reporters on Thursday in Portland. “And all we need to do is look around at what is happening around the entire world.”

As of late Thursday, there were 30 cases of the virus statewide.

“We’re all feeling this pain together,” said Jennifer Crockett, the Liberty Theatre’s executive director, referring to the closing of the Commercial Street theater and the impact it will have on local businesses, restaurants and hotels.

Crockett said the theater “wants to be careful with patrons, volunteers and staff” who are in the demographics most at risk from the virus.

The decision to close came after a drastic slowdown in ticket sales. Crockett said she didn’t think the theater could sell 250 tickets for any of the scheduled shows, including Saturday’s performance of Work Dance Co.’s “Opulence! A Dance Extravaganza!,” an Aerosmith tribute band and a concert featuring classical composer Angelique Poteat.

Crockett said most of the events are postponed until the summer or fall. Patrons will hear from the theater regarding refunds and tickets next week.

The Liberty will push back its 95th birthday party, which was scheduled for April, until later this year.

State Health Officer Dean Sidelinger said Oregon could see up to 75,000 new cases of COVID-19 by mid-May unless the state takes measures aimed at stopping the spread of the disease.

Washington Gov. Jay Inslee issued similar restrictions in his state, where at least 37 people have died from the virus as of Friday afternoon.

Within a few hours after Brown’s announcement on large gatherings late Wednesday, the Clatsop County Job and Career Fair scheduled for Thursday at the Seaside Civic and Convention Center was canceled.

“Based on the new directive from Gov. Brown ... we have made the difficult but correct decision to cancel,” Kevin Leahy, the executive director of Clatsop Economic Development Resources, which organizes the job fair, said in an email.

Clatsop County Manager Don Bohn said the county is in communication with medical providers, the state and other stakeholders monitoring the situation. He said staff are spending a lot of time planning for how to continue to run county operations after cases are reported locally.

Clatsop County Circuit Court said jurors who are in higher risk categories of severe illness may contact the court to reschedule their jury service.

The county is also warning people about a misinformation campaign being spread about a downloadable app for tracking coronavirus cases. The link will install malware on individuals’ devices.

Astoria Library events are canceled through April 8. Library Director Jimmy Pearson said the library will remain open. The Cannon Beach History Center & Museum is closed through March 30. The Coaster Theatre has postponed the opening of “Play On!” until April 3.

The show goes on for other events. Second Saturday Art Walk is still on in Astoria. The Ten Fifteen Theater’s production of the Irish ghost story play “The Weir,” will play this weekend.

Daric Moore, who owns the theater, said the theater is “taking precautions” and will have hand sanitizer and gloves available. The theater seats 87 and uses cloth chairs that will be cleaned after shows. “There’s not a whole lot that people touch in the space,” he said.

Chef Chris Holen will still hold his Chef Outta Water food and music event at the Astoria Armory on Saturday featuring a chef from Mississippi. So far, the event has sold over 150 tickets. Holen said the event will not go over 250 people. There will be hand sanitizer available.

The Astoria Downtown Historic District Association is hosting a business owner’s forum on Thursday in response to coronavirus. The event is at 5:15 p.m. at the Columbian Theater. Officials from the Clatsop County Health Department, Port of Astoria and Astoria Mayor Bruce Jones will answer questions and provide information on the efforts to mitigate the pandemic. The event is free and is limited to 125 people.

Along with the job fair, Oregon Ghost Conference, the Oregon Department of Revenue, American Public Works Association and the ACBL Sectional Bridge Tournament all canceled.

“We’re hopeful that we can reschedule some of them, but it’s all based on availability, and our calendar is filling up pretty quickly as we get past the month of April, so we’re trying to find available dates for some of the groups who are interested in rebooking. It is their decision that they reschedule their event,” said Russell Vandenberg, the general manager of the convention center.

Vandenberg said the cancellations are “definitely going to make an impact in our business model as well as the economic impact on the community. It’s far-reaching, well beyond the convention center. It impacts the hotels, the restaurants, any hospitality business that serves tourists, it’s definitely going to trickle down to other businesses.”

The convention center is open for business, though events need to be under the 250-person limit.

“We don’t promote our own events, so we rely on our reach that we have with our meeting planners. It’s not typical to find a group that’s willing to book an event within 90 days,” he said. “The large bookings, we see them two to three years in advance, so it’s not likely that we’ll find a conference.”

Vandenberg said the convention center and Oregon Fine Foods catering will both lose money because of the cancellations. He said they are trying to rebook everything they can and be “creative in our scheduling.”

“April will be a slim month for us,” he said.

Nicole Bales of The Astorian and Jake Thomas of the Oregon Capital Bureau contributed to this report.