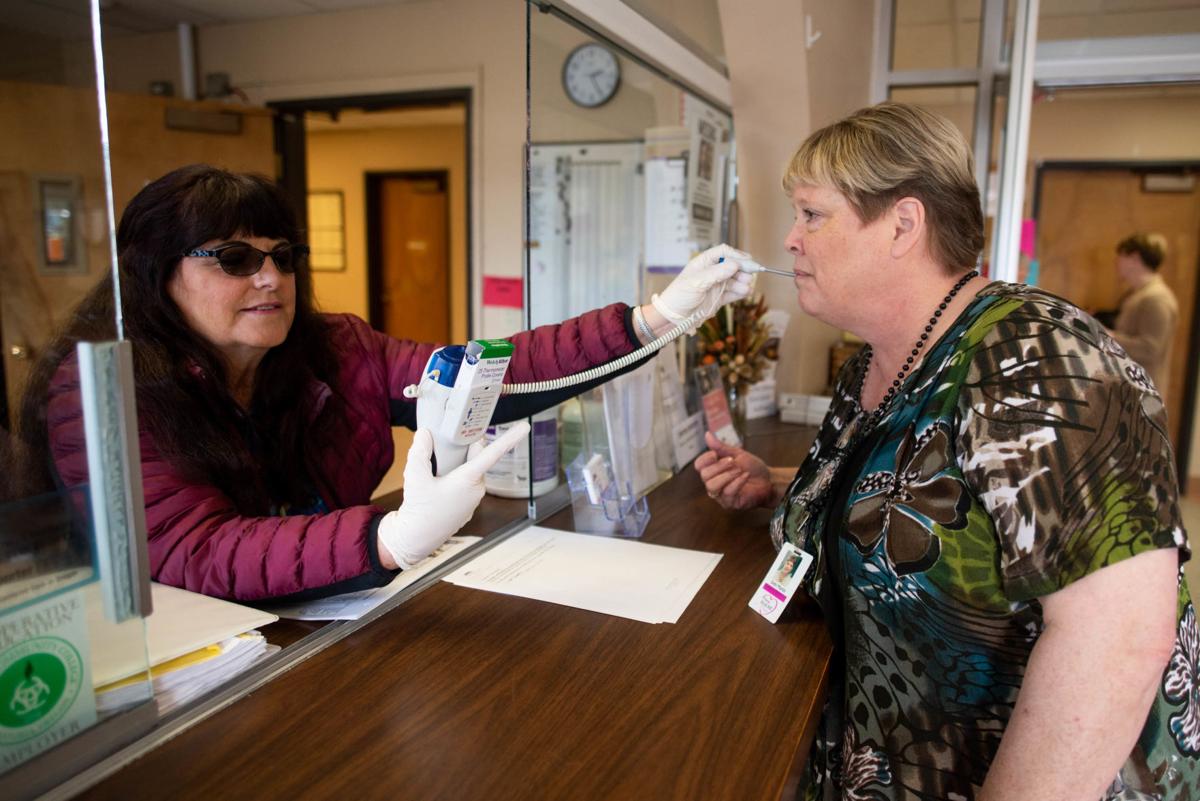 Debi Martin, the director of in-home care for the Clatsop Care Health District, has her temperature checked as a precaution. 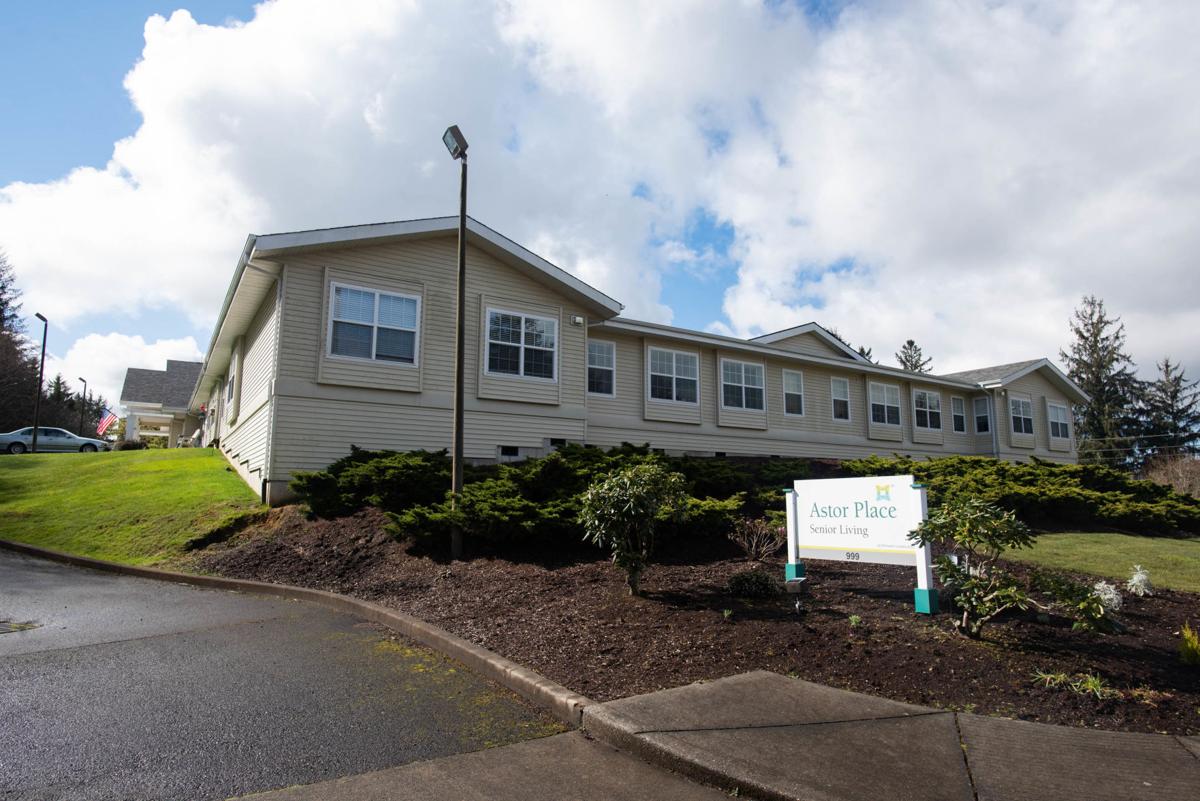 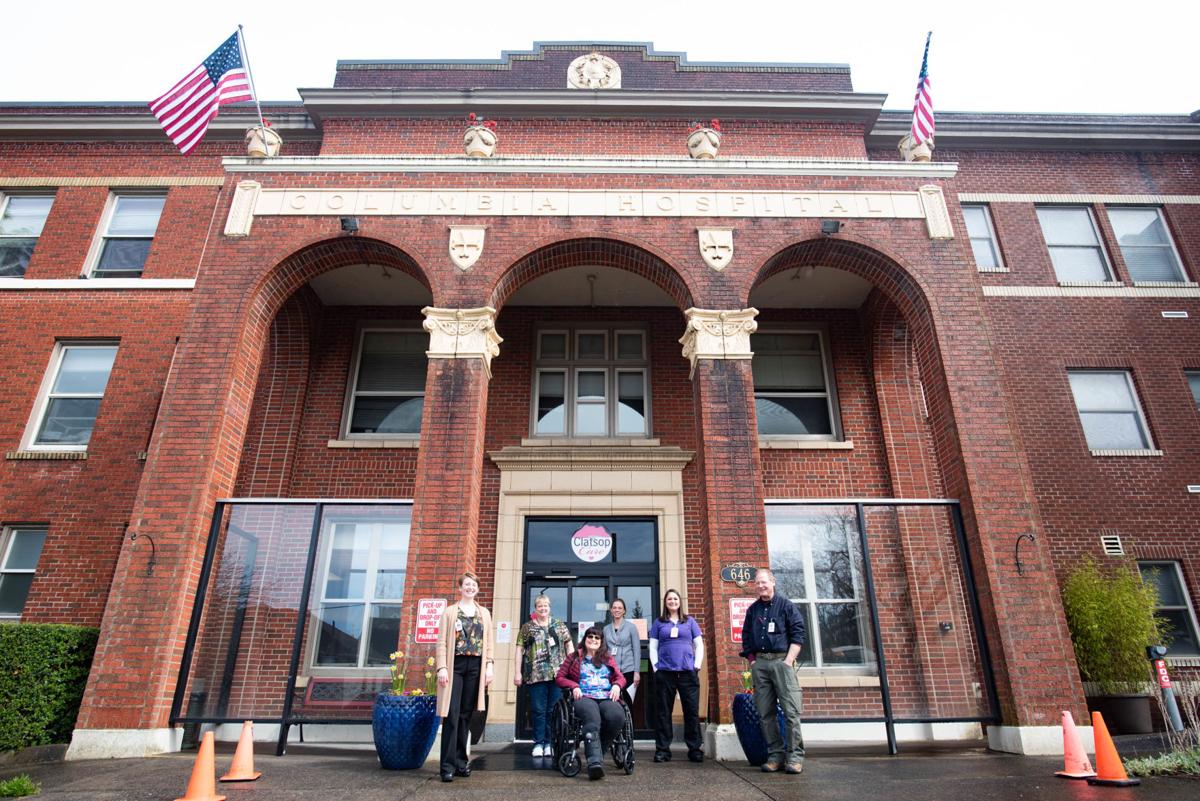 Staff at Clatsop Care Health and Rehabilitation outside the building on 16th Street in Astoria.

Judi Lampi used to visit her father every day at Astor Place in Astoria.

After her father fell and broke his hip and femur earlier this month, he was taken to a Portland hospital for surgery. Lampi and her sisters were there waiting to see him when he woke up.

On the same day her father was released into a skilled nursing facility in Portland, Gov. Kate Brown ordered restrictions on care homes as a precaution against the coronavirus. The elderly and disabled are among the most at risk from COVID-19, but many have been cut off from their loved ones.

“We haven’t seen him since the day after surgery. So, that was hard, that he just went through this horrible thing and then couldn’t see anybody,” Lampi said.

“My sisters and I, and other family members, call him every day … my sisters drop off a care package twice a week with goodies and whatever he needs. His great-grandchildren are making cards and sending them. So, we’re doing whatever we can to keep the spirits up,” she said.

Lampi said her father is expected to return to Astoria in a few weeks.

“I told him when he gets here that I’m going to stand outside his window and call him on the phone so we can look at each other when we’re talking,” she said.

Lampi said she is proud of all the care homes for how they are looking out for their residents. “A lot of people are going through this,” she said.

David Miller, the administrator for Clatsop Care Health and Rehabilitation, said the anxiety can be higher for families than the residents in facilities during the crisis.

“We have little to no visitation at all so we’ve become the families and the friendly face at the door,” he said.

Communal dining and activities for residents have been canceled to maintain social distancing.

“I think the biggest thing that has changed in the daily cycle is their inability to receive visitors or to go outside into the public and that communal dining,” Miller said.

He said staff roles have become fluid, with the goal of keeping residents engaged and maintaining a sense of normalcy.

Miller and other staff regularly sing songs with residents and in the halls to break up monotony. The songs range from spiritual songs to The Beatles and St. Patrick’s Day songs. Some residents have requested songs from the 1930s.

They have also been delivering crossword puzzles and plants to resident’s rooms and working with families to help with virtual visits.

“What I believe is the biggest challenge for a lot of the residents and the families is the emotional and the mental (toll) of being isolated,” said Mike Aho, whose father is a resident at Clatsop Care Health and Rehabilitation.

Aho, a board member for the Clatsop Care Health District,said Miller called him last week to tell him his father had a couple of “rough days.”

Miller suggested Aho talk to his father via FaceTime or Skype so that they could see each other. But then they came up with a way Aho could see his dad in person.

Aho sat in a chair next to a window in the facility’s “healing garden.” Then staff brought his father downstairs so they could see each other and talk through the window.

Aho said he thinks it helped his father to see him and talk in person.

“And I’m really pleased as a family member and a board member how the district was proactive.”

He said Clatsop Care Health District began screening people at entrances and taking other precautions before it was mandated by the government. He is also pleased with the care staff has continued to provide.

“On a good day, when nothing else is going wrong, it takes such a special person to work in these facilities and care for the residents. And then you put the stress of this going on in the world on top of it . I mean, the people are going home, they’ve got kids out of school and they’re dealing with the most fragile people in our society and this is going on around them,” Aho said. “It takes a special person to do that. I just hope that they can hold up to it.”

Miller said many employees have children and working partners and that the situation has disrupted every part of their lives.

“But through all that storm, it’s unbelievable to see what they’re doing for and with our residents every day. In the tender loving approach, the care that goes on, regardless of the issue, we still have to provide in-depth, personal, intimate caregiving efforts and they do it without any fear,” he said.

Miller said they have also had a lot of support and donations of personal protective equipment from Astoria High School, businesses and individuals in the community.

She said in an email that after spending time picking out books for residents online through Amazon, she found they would not arrive until the end of April or May.

She called Lucy’s Books in Astoria and said the owner, Lisa Reid, agreed to hand-select books for residents.

DeGuisti said Reid provided a discount on the purchase and delivered two bags of books, along with three bags of “bonus books.”

“I personally was blown away by her generosity at a time when she herself is facing economic hardship from the shutdowns,” she said.