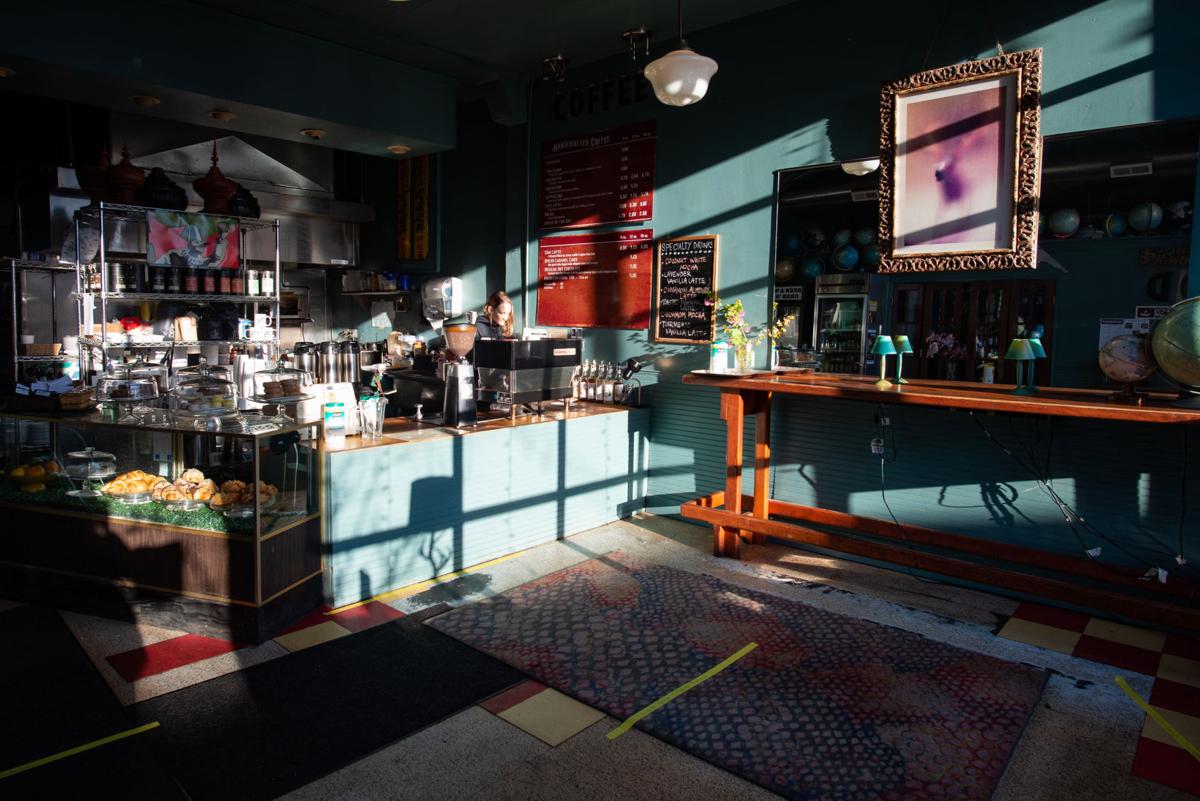 Casey Palmgren works behind the counter of the close-to-empty Astoria Coffeehouse & Bistro. The bistro removed furniture and marked the floor with bright yellow tape with ‘6ft Social Distance Protocol’ written in large letters. 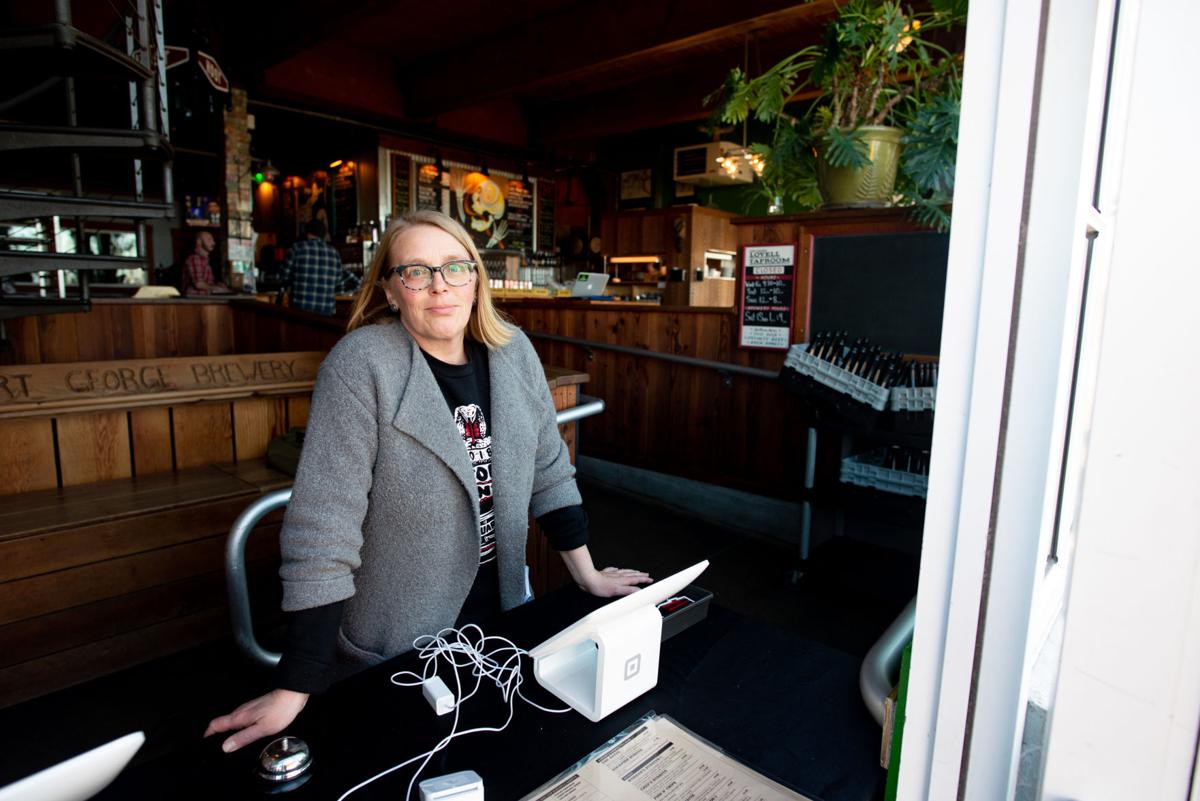 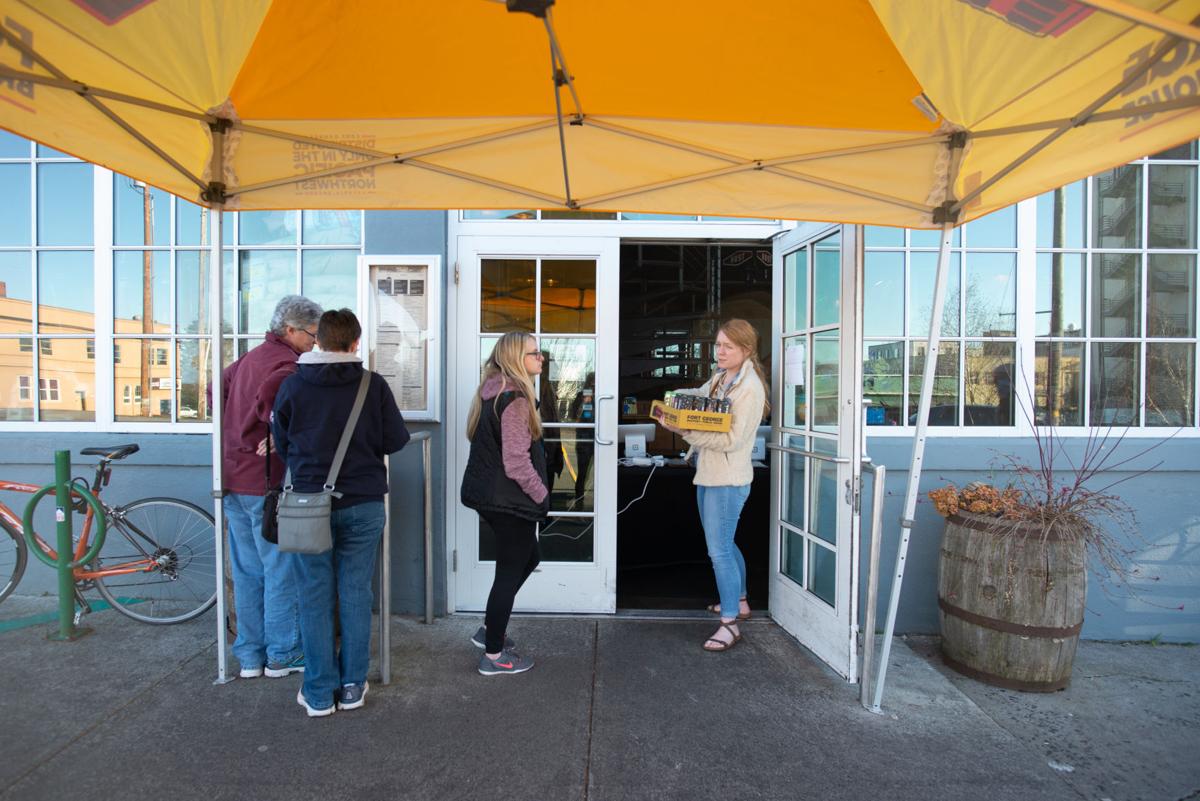 Jimbo DeFeo, the co-owner of Astoria Coffeehouse & Bistro and Carruthers Restaurant, went from nearly 50 employees to about four on Monday.

Gov. Kate Brown’s announcement that bars and restaurants will be takeout-only for the next month punched restaurateurs, retailers and service sector workers on the North Coast in the gut, leaving many business owners contemplating how many employees to lay off, how to help them get unemployment and how to get creative to keep a trickle of income coming in.

Businesses have been laying off staff and transitioning to limited operations of to-go orders and deliveries.

DeFeo said he and partner Anthony Danton decided to close Carruthers entirely for four weeks, making the coffeehouse a to-go counter. They removed the furniture, replacing it with taped grids showing people how to stay the recommended 6 feet from each other.

Fort George Brewery, usually one of the busiest places in Astoria, was dead Monday night after co-owner Chris Nemlowill decided to close the Duane Street pub to the public, temporarily laying off about 120 people. Nemlowill described it as the hardest day of his career as a small business owner, but the right thing to do to protect his employees.

Fort George is selling off draft beer in its pub at half price to get rid of it and has been told not to send any more kegs to urban markets like Portland and Seattle, Nemlowill said.

The focus has turned to keeping some employees working on the canning side, where Fort George and other local breweries have experienced a spike in demand as more people drink at home.

“We’re really hoping in four weeks we can open back up, hire staff and get ready for a great summer,” Nemlowill said. “I really hope this blows over in four weeks.”

Buoy Beer Co., Astoria’s second-largest brewery, laid off 57 of its 114 employees, said David Kroening, the brewery’s general manager, switching to to-go orders and deliveries, and selling discounted draft beer and educating the public how to make their own in-home kegerators.

“We are in the same boat as everyone right now, taking in all the information available and finding the right balance to move forward,” Kroening said. “We have been reaching out to any possible businesses in the area to try and find opportunities for our team to find work, but many are likely going to have to pursue unemployment assistance.”

Stephen Allen, a local accountant, owns with his family several restaurants and drinking establishments, including Astoria Brewing Co., a nearby taproom, The Chart Room and the Desdemona Club, with about 50 employees between the operations. They gathered Monday to contemplate the future, angered by the swiftness of Brown’s edict.

“We could do all that social distancing that people want to happen,” Allen said. “We could have that happen here, and have a little bit of a business, and keep our employees on.”

Karen Allen, Stephen’s wife and a co-owner of the businesses, said it’s difficult to start something like to-go options from scratch so quickly.

“How do you start a business when nobody has a job?” she asked.

Terry Robinett, the co-owner of the Merry Time Bar and Grill and the Labor Temple Diner & Bar with her husband, Todd, had already been drastically changing operations at the businesses, from deeper cleaning and removing items off the counters to strategically cutting her employee’s hours.

After researching how easily the coronavirus spread, she proactively postponed more than a dozen events at the Labor Temple to later in the spring and summer.

“The events was a big toll,” she said.

Brown’s announcement Monday was the straw that broke the camel’s back, leaving the Robinetts in the unenviable position of closing both businesses for the next month and temporarily laying off around 30 employees.

Sarah Lu Heath, the executive director of the Astoria Downtown Historic District Association, has been trying to be a conduit of good information for business owners, but said so much is still up in the air.

“I feel like hearing this announcement at least told us where we were,” Heath said.

The downtown association has recommended supporting local businesses by purchasing gift certificates during the shutdown. Heath is helping to organize a virtual forum at 5:15 p.m. on Thursday to provide business owners more information on potential support.

“This is a fluid situation, and your personal health, and the health of our community, is priority,” she said. “We’re going to work together to figure out what systems are available in the coming days and weeks.”

The shutdown in restaurants and bars has also affected retailers. Scandinavian store Finn Ware is closing for at least two weeks, switching to phone orders, pickup, mail shipments and in-store shopping by appointment.

“With no customers, there is little reason to be open,” owner Saara Matthews said on her Facebook page. “I hope news sources explain the plight of the small retail business too. I will be struggling to pay bills. I’ve had to lay off (seven) employees and I don’t know if we’ll bounce back.”

Grocery stores are among the few businesses getting busier, with large retailers like Fred Meyer in Warrenton and Safeway in Astoria hiring to help restock shelves amid the rush.

Matthew Stanley, the general manager at the Astoria Co+op, said the store just had its busiest week ever.

Workers at the co-op have been constantly sanitizing surfaces and educating customers about social distancing. The store is implementing new safety measures as the public health warnings escalate, such as limiting shoppers inside, queueing others outside and encouraging people to stock up rather than make daily visits, Stanley said.

“We have a huge appreciation for all grocery store workers,” Stanley said. “We are the front lines, and we’re putting ourselves at risk, so we hope people are taking this seriously. I don’t care about sales. Stop coming in every day.”

One uniquely North Coast product surging in demand is toilet paper, which Georgia-Pacific’s Wauna Mill makes and shoppers around the country have been buying in bulk.

“Compared to about one to two months ago, demand’s up twice as much for bath tissue,” said Kristi Ward, a spokeswoman for Wauna Mill. “Wauna makes Angel Soft.”

“There’s a bottleneck there with getting it on the trucks and getting it out because of the demand increase.”