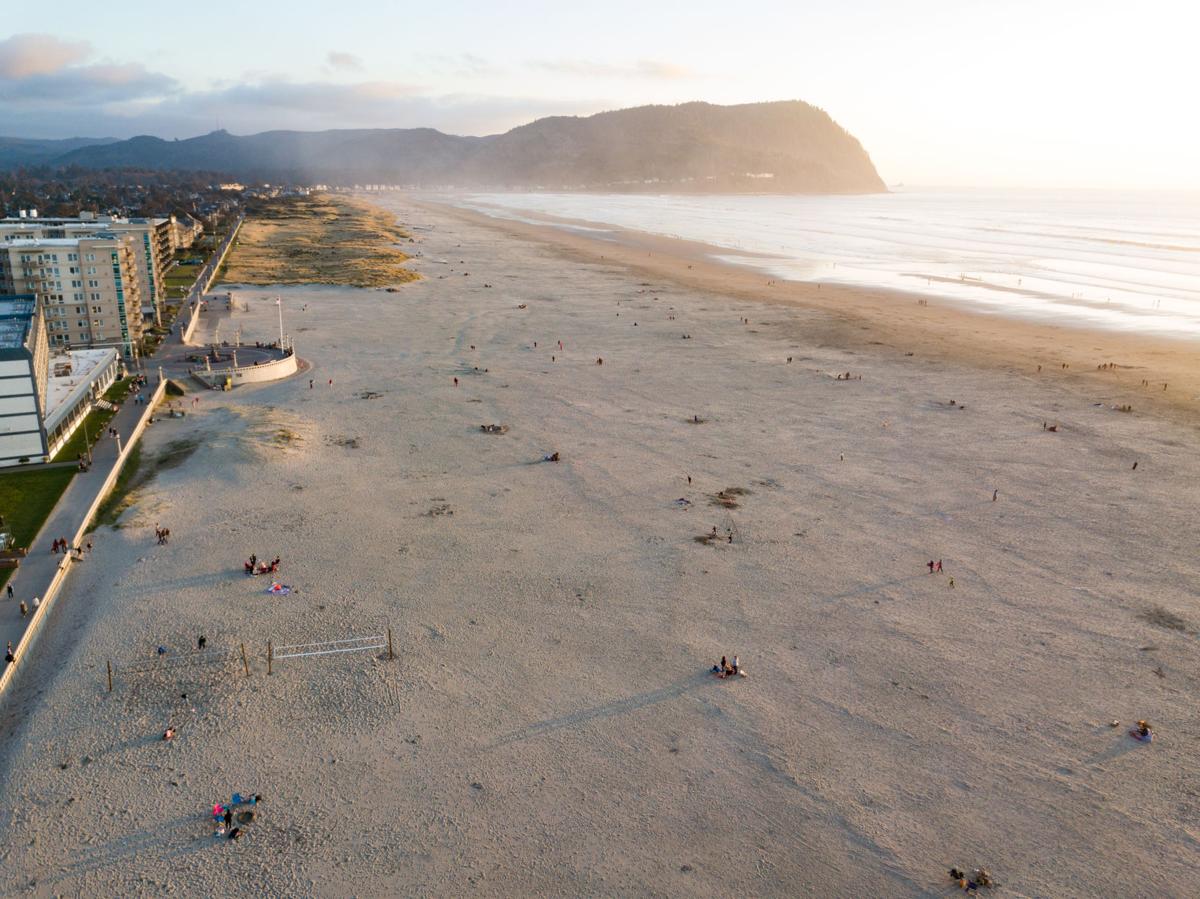 The beach at Seaside on Saturday evening. 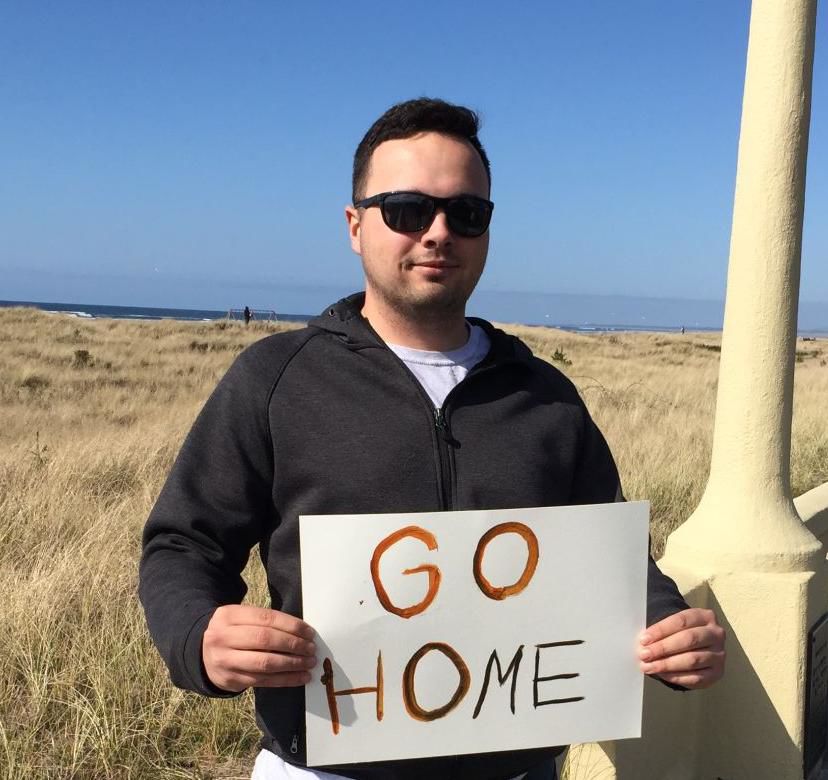 Seaside resident Martin Trutanich had a message for tourists on Saturday. 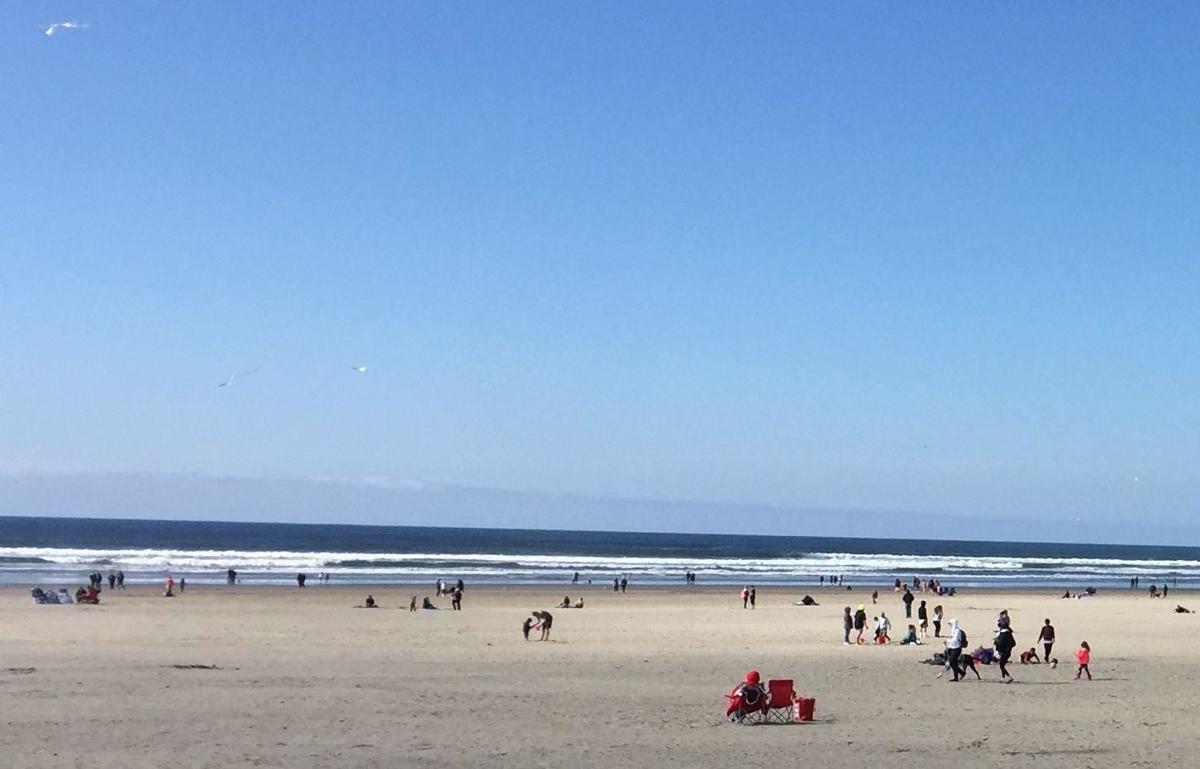 The beach at Seaside on Saturday afternoon. 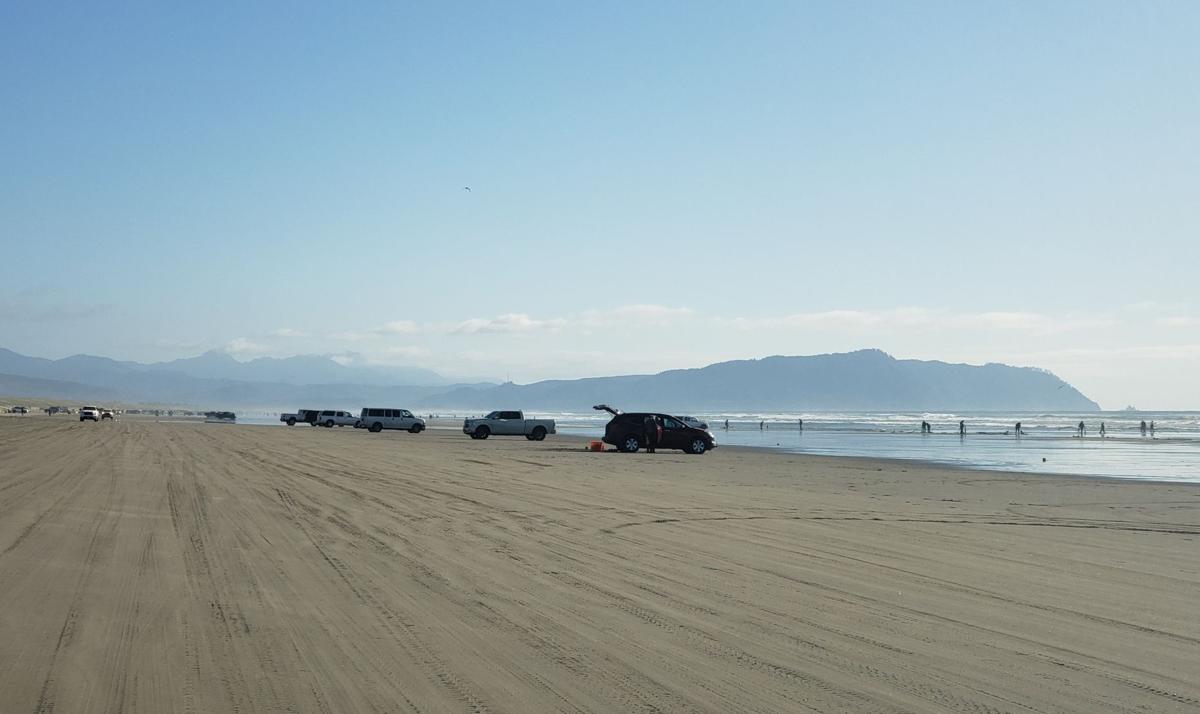 Cars on the beach on the North Coast on Saturday.

North Coast leaders on Saturday made an extraordinary appeal to visitors to stay away as a precaution against the coronavirus.

The Astoria City Council, at a special meeting on Sunday afternoon, voted to prohibit vacationers from staying in commercial lodging.

The Clatsop County Board of Commissioners also voted at a special meeting on Sunday afternoon to close campgrounds, hotels, short-term rentals and homestay lodging for two weeks starting at noon on Monday.

Despite Gov. Kate Brown's new message that people in Oregon “Stay Home, Stay Healthy” to contain the spread of the virus, many people took advantage of the sunny spring weather to come to the coast. Parking lots were full at Oswald West State Park, Arcadia Beach and Hug Point and beaches and coastal towns were busier than expected given the public health warnings about the global pandemic.

The North Coast's economy increasingly depends on tourism dollars and the government's restrictions on large gatherings, restaurants and bars have already caused hundreds of layoffs during a time when business usually improves during spring break.

"We want to be on the front lines of the recovery when it comes. We want to be welcoming and open arms and have the capacity. But, right now, we're in danger of creating more than an economic hardship. We're in danger of creating a social hardship, and we just don't want to see that happen," said David Reid, the executive director of the Astoria-Warrenton Area Chamber of Commerce.

"So we're asking everybody to be smart about this and take some additional lumps right now, so we don't have to take bigger ones later."

In Warrenton, the order covers several major commercial campgrounds on Clatsop Spit, including KOA Resorts, Kampers West and Hammond Marina RV Park, except for employees and camp hosts. Anyone not on a long-term stay as of March 11 must move out by Sunday evening. It also bans homestay lodging and closes hotels except to people on long-term stays and as authorized by the Clatsop County Public Health Department.

“Postpone your plans, but don’t come here now,” the mayor said. “While this thing is going on, transmission is worse when we introduce … folks that are not from here that we don’t know their health status. They don’t know their exposure.”

Filling all the campgrounds can double Warrenton’s population and potentially overwhelm local services in an outbreak, Balensifer said. His comments about social distancing echoed pleas from other elected officials and business leaders around the region to postpone unnecessary travel.

“People need to realize that means don’t go to another town to recreate,” Balensifer said. “Stay in your town. Stay where you’re at … Don’t get out there and bring your germs over here.”

The emergency declaration, lasting through April, also redirected city funds toward the emergency, canceled city meetings deemed nonessential and authorized City Manager Linda Engbretson to close any city facilities to slow the spread of the virus.

In Seaside, the City Council voted to declare an emergency over the virus.

“It’s the first step to dealing dramatically to protect our citizens,” Mayor Jay Barber said. “More will come out in terms of the steps we will take to deal with retail businesses and gatherings in the city.”

City Manager Mark Winstanley reminded people that it is not "business as usual."

“We’re telling people they need to be responsible,” he said. “Whether they come to Seaside or don’t come to Seaside, it’s very important for people to make responsible decisions. It is not business as usual. This is a very serious and different situation. We think people should pay attention to that situation.”

On Friday morning, Seaside was largely quiet, Winstanley said. “It just got busier quickly. It was a surprise to see that many people come to town,” he said.

In Astoria, which declared an emergency over the virus last week, Mayor Bruce Jones said he wanted the city to act quickly because he did not want visitors who are being forced to leave Warrenton to come to Astoria.

"I urge the public to heed the strong recommendations of public health officials and do not travel for spring break or any other nonessential purpose until the health crisis is over," Jones said in a text message. "My message to vacationers is, 'Thank you for loving Astoria, but love us from afar until further notice.' Stay away."

Jones said he and other public officials from the coast have shared their concerns about tourist travel with Brown's office and hoped the governor would take firmer action. In the absence of more direction from the state, he said, "local jurisdictions are taking action to protect the health and safety of our residents."

The Oregon Association of Hospitals and Health Systems has been pressing Brown to order people to stay home. Other professional health organizations joined that plea.

On Friday night, the governor came close to doing so. She stopped just short of that at her news conference announcing a new campaign. “I am directing Oregonians tonight to stay home to stay healthy,” the governor said.

Brown made the declaration with Portland Mayor Ted Wheeler and others. Wheeler said he expected to order the residents of his city to end all trips from home that could put people in contact with others. He said he hoped the state, too, would issue such an order.

But people in Oregon are getting some mixed messages. The Oregon Health Authority noted that it was the weekend and that people wanted to get out and enjoy the sun, saying a hike or a walk is appropriate with social distancing and sharing a link to Oregon State Parks.

On social media, reports emerged early on Saturday of heavy traffic from the Portland metro area and other places toward the coast.

“Both parking lots are full and people are parking along the highway shoulders in either direction,” he wrote about Oswald West. “There are only two small bathroom facilities to accommodate the hundreds of people recreating here this spring break. Advised social distancing is certainly not happening.”

Traffic was thick on U.S. Highway 26, he said, and both Hug Point and Arcadia Beach were also busy.

“This is not spring break as usual, yet folks from Seattle and Oregon’s Willamette Valley are acting like it is,” he wrote. “They are exhausting our limited grocery resources and possibly spreading COVID-19 to our area from more densely populated and infected areas.”

Some residents and businesses also pushed back against tourists.

In Astoria, Geno’s Pizza and Burgers announced on Facebook on Saturday afternoon that it would limit deliveries.

“Due to the fact that so many people are coming to the coast, we will not deliver to any motels in Astoria,” the business wrote. “We will deliver as usual to our customers for now. I must protect my employees from all these travelers.”

While the number of visitors unsettled many locals, tourism did not appear to match a typical spring. Restaurants and bars are providing takeout only, and many businesses have closed entirely over concerns about the virus.

In an audio recording posted on Saturday, state Sen. Betsy Johnson said she has been overwhelmed by calls from her constituents on the coast.

"The gist of the calls are all the same. And to me they're very poignant calls and emails. What they say is, 'We as responsible Oregonians heeded the warning to shut down at great personal and financial detriment to ourselves,'" the Scappoose Democrat said. "The sad part is that after Oregonians took these very painful steps, they have been inundated with visitors, largely from Washington, to a lesser degree California, and a goodly number of them from Portland."

Sarah McAllister, a photographer and creative stylist who lives in Cannon Beach, said she was unnerved by the visitors she saw on Saturday.

"Our area relies almost entirely on tourism as a whole, but this is the time we need it the very least," she said in an email. "I am begging and pleading with you just how important it is that we do not have tourists in our tiny rural areas right now. We don’t even have the hospital capacity to care for our locals with the COVID-19 pandemic happening.

"This is a public outcry to please not visit tiny rural coastal towns. We have a ton of recently unemployed service and hospitality workers in our area (myself included) and the last thing we need is more tourists bringing COVID-19 here faster than it will already emerge."

Katie Frankowicz, Nicole Bales and R.J. Marx of The Astorian and Les Zaitz of the Oregon Capital Bureau contributed to this report.

I have to agree with the consortium of local mayors on this one.

Astoria residents should stay within Astoria as any germs they may have might not be present across the bridge in Warrenton; Warrenton residents should do the same and stay put; same goes for each small formal community down to Cannon Beach, whose germs may be wholly different from everyone else's who lives on the North Coast.

And although the beaches are public beaches, and open air with often winds, any "outsider" who might wish to spend time on one of the beaches should understand that for the time being...only "locals" can access and recreate on the beaches...but only those beaches within their city limits (the germ thing).

And remember that local law enforcement now can cite or arrest violators! Unless you fall under one of the multiple categories of people who are allowed out in public. Like to walk/exercise...walk your pets...go to the store for staples (that's food and stuff)...go to a medical facility...go to the pharmacy...and so on. Of course to be stopped by law enforcement the officer has to have Probable Cause, meaning she/he has to determine you are a violator (sneaking out) because without Probable Cause any citation or arrest is no good...and a bad arrest is a good lawsuit these days.

But don't worry. All Law Enforcement Agencies are limiting their Presence and exposure (to the virus) to life-threatening emergencies anyway. One sick cop can take an entire department out of service...and that would be bad.

So, like the mayors say, keep your unique breed of germs at home wherever home is for you. We don't want you here. It's kinda like biological warfare profiling. Tourist/Visitor/Outsider = Foreign Body = Citation/Arrest/"No Bueno".

All kidding aside - wash your hands often, cover your nose/mouth when necessary, make a sincere effort at social distancing, stay home unless absolutely necessary to go out, and let's be kind to each other. This, too, shall pass.