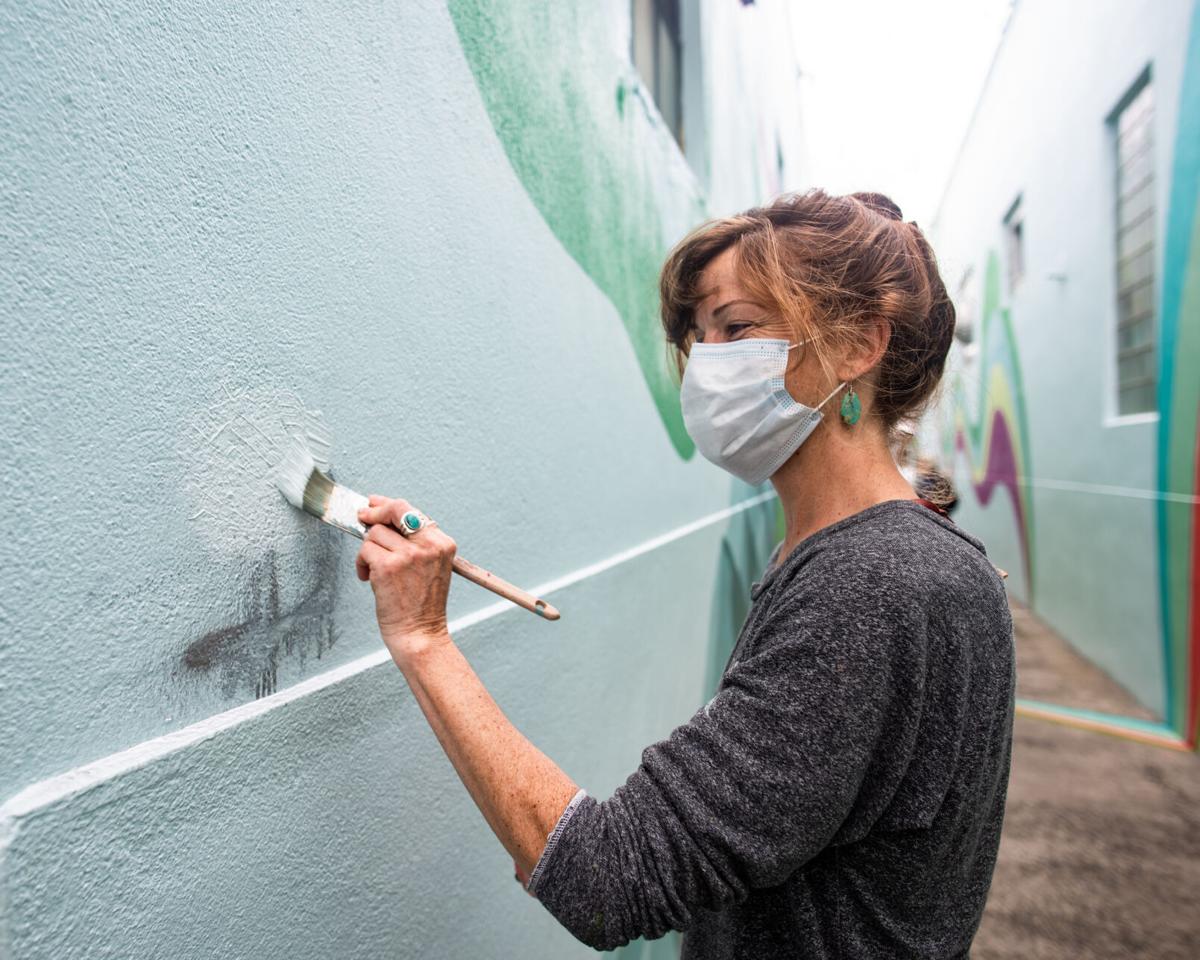 Andie Sterling covers graffiti painted on her mural in the 13th Street Alley. 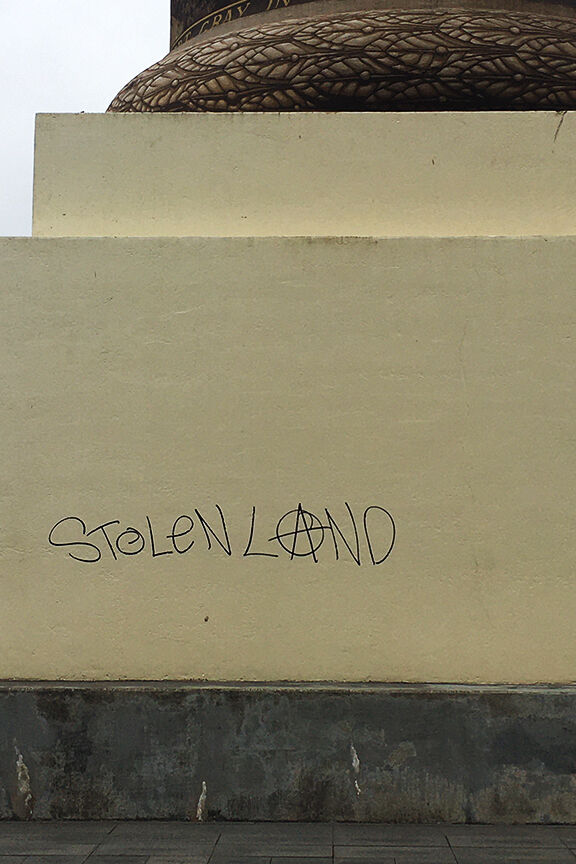 Someone recently used markers to scrawl ‘Stolen Land’ at the base of the Astoria Column. 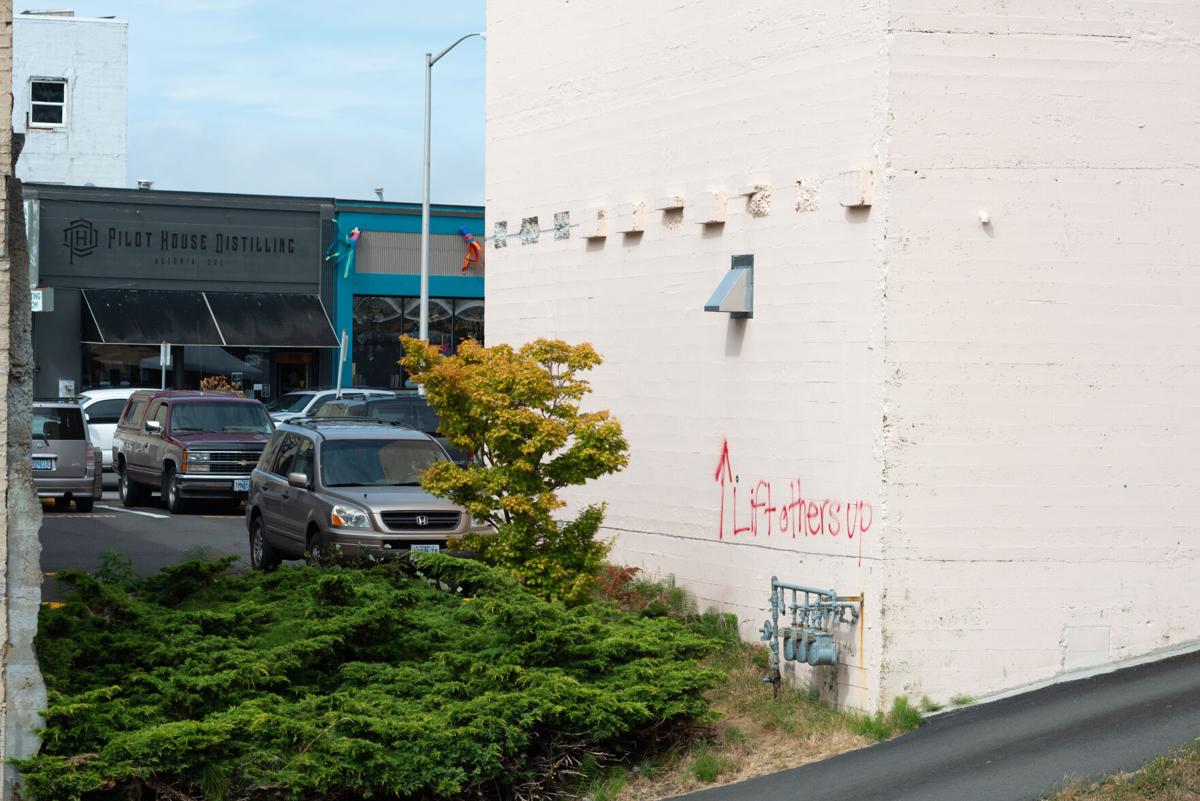 ‘Lift others up’ was spray-painted onto the back wall of Blaylock’s Whiskey Bar. 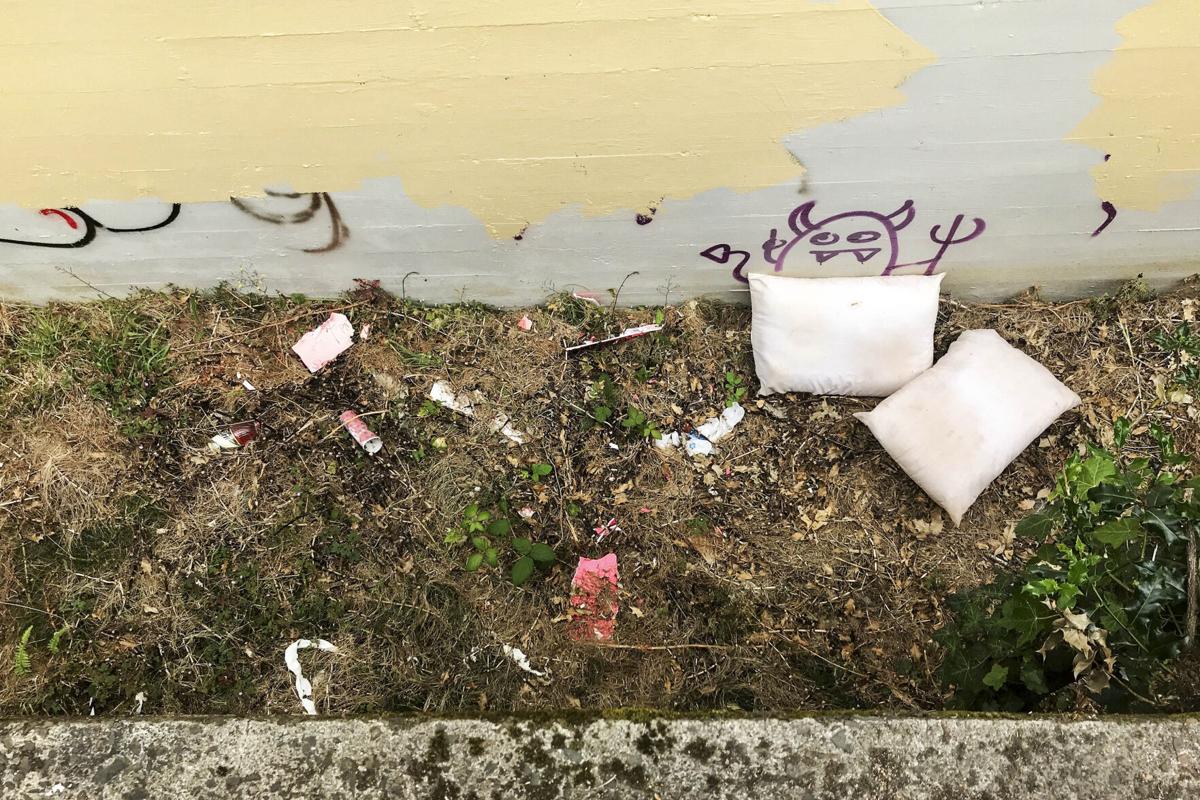 Astoria has seen a resurgence in nuisance crimes like littering, graffiti and vandalism of bathrooms during the coronavirus pandemic. 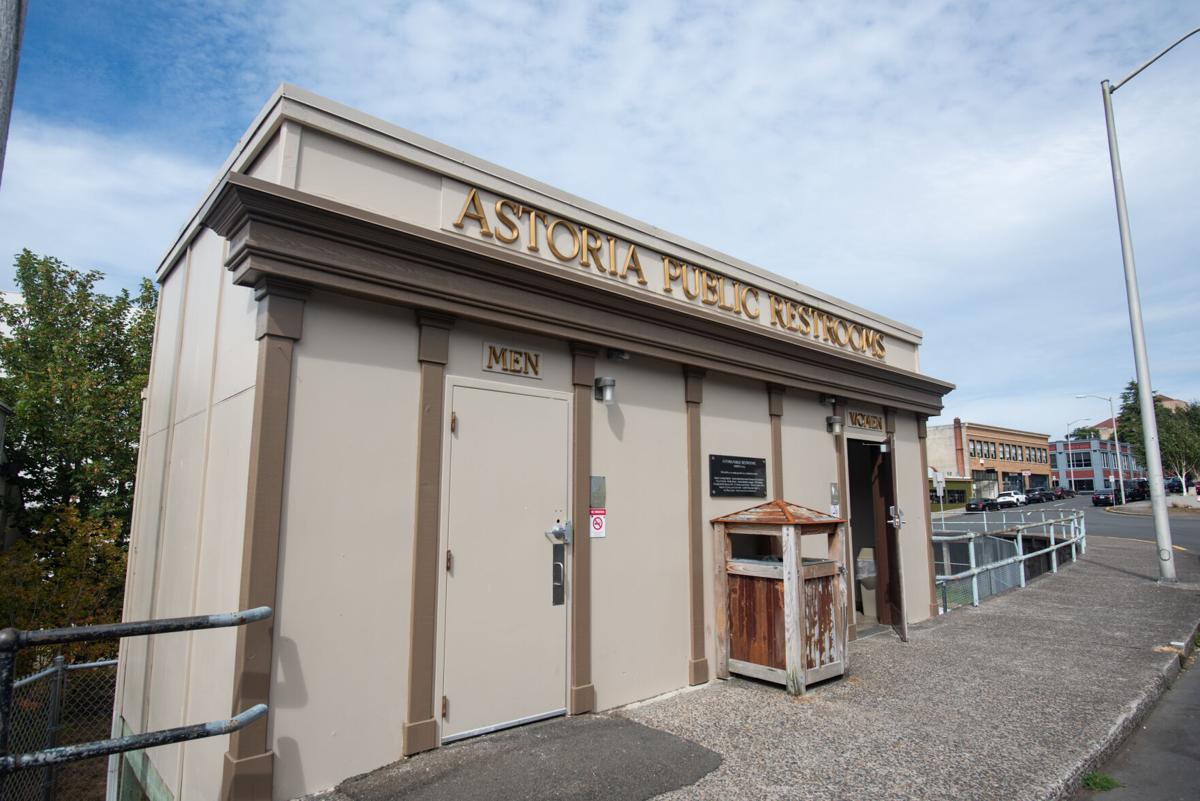 Cleaners have often found drug paraphernalia and trash at public restrooms off of Exchange Street in Astoria.

The conditions in Astoria’s public bathrooms got so bad this year that the previous cleaner wouldn’t take the job again, even when offered more than double the money.

Graffiti, meanwhile, has proliferated around the city, all the way up to the base of the Astoria Column.

Astoria and other cities are facing a rise in quality of life crimes during the coronavirus pandemic.

City Councilor Joan Herman questioned at the City Council meeting Monday whether the increase in vandalism had to do with downtown being largely closed for two months starting in March.

“We do have ebbs and flows of this, but really the concerns that we’ve been seeing in regards to restrooms and also graffiti have actually been more recent, not at the beginning of the COVID pandemic,” City Manager Brett Estes said. “The graffiti started early on, but it accelerated later on. And also with the bathroom vandalism, that happened in more recent months rather than at the beginning.”

Sarah Lu Heath, the executive director of the Astoria Downtown Historic District Association, said the problems at bathrooms, people camping in alcoves, drug use and harassment have been the most concerning issues popping up in the past month or two after a relative calm.

The petty crimes are an “additional stress on business owners that are trying to figure out how in the world to operate right now, when foot traffic is so light,” Heath said. “These nuisance issues become really meaningful and impactful. If you’re losing one sale, that might have been your only sale of the day.”

The city’s two main public bathrooms at the Doughboy Monument in Uniontown and near a memorial plaque for Clark Gable on Exchange Street have been particular sore spots. The city paid Oregon Janitorial $28,000 a year up until June to clean both of them, along with the bathrooms at Tapiola Park and Evergreen Fields near Safeway, between two and four times a week.

The city reached out to other cleaning companies and received one offer of more than $100,000 to do the same work. The city went back to the previous cleaner and offered to more than double the payment, but he still wasn’t interested, Dart-McLean said.

The city ultimately settled on a contract with Associated Cleaning Services for more than $46,000 to clean the downtown and Doughboy restrooms three times a week.

“So far, we haven’t had any extreme vandalism or issues — lots of trash left in restrooms and minor damage to amenities,” Dart-McLean said.

The bathrooms lock at 6 p.m. daily. Police check on them after hours to ensure there is nobody camping in or vandalizing the spaces.

The increase in tourists during the summer doesn’t easily explain the rise in garbage or vandalism. The city last had a major rash of bathroom vandalism four or five years ago during the winter, Estes said, describing the problem as cyclical.

Mark Winstanley, the city manager in Seaside, said the city has noticed a similar increase in tagging and other vandalism.

“We’ve been able to get out and take care of them within hours,” Winstanley said. “We’re pretty diligent about that. Of course, the kind of economy we run, it doesn’t help us any.”

Astoria Police Chief Geoff Spalding said there have only been eight reports so far this year of graffiti, despite what appears to be a worsening problem.

“I suspect a lot of people are not reporting it or they’re simply covering up as quickly as possible, which of course we encourage,” he told the City Council on Monday.

Local artists like Roger McKay have offered to cover up graffiti for free. Andie Sterling, who painted a mural in the 13th Street Alley, was back Thursday cleaning a “D” scrawled on a wall near the back door of Erickson Floral Co.

Heath said there is a belief among business owners that police don’t take such low-level offenses seriously. Spalding, while acknowledging the belief, said he wants to put more officer time toward the issue but needs more information from the public.

He is testing a new online reporting form on the police department’s website for nuisance and other nonemergency offenses.

“If we don’t know where and when it’s happening, and some of the times, what have you, it does make it difficult for us to establish some crime analysis trends,” he said.

Cities around the country have dealt with more graffiti during the pandemic, some of it owing to the tense political climate created after the death of George Floyd at the hands of Minneapolis police and in the lead-up to a presidential election. In Warrenton this summer, City Hall was tagged with “BLM” graffiti.

Both Heath and Spalding acknowledged an uptick in political messaging in graffiti and stickers. Spalding noted the message “Stolen Land” that was recently scrawled across the base of the Astoria Column, the letter “a” replaced with an anarchy symbol.

Estes brought up measures other cities have taken, from banning the sale of spray paint to disallowing the possession of various graffiti-marking tools. Such measures have had mixed results in places like Chicago, which has had bans on spray paint since the early 1990s.

The city, in the belief that most of the bad behavior can be tied to a small group of people, has also recently explored a chronic nuisance ordinance and expulsion zones.

“There has to be some sort of tool,” she said. “I can’t think of another scenario where a small group of people are habitually interfering with civic life without any sort of guardrails on their behavior.”

But Spalding said the city might want to take a more cautious approach after a federal court recently ruled that Grants Pass citing people for camping or sleeping in public is unconstitutional if they don’t have reasonable alternative shelter.

“If you follow some of the logic there, you might be able to draw some of the conclusions that if someone doesn’t have the ability to use a restroom, they have to go somewhere, and we may not be able to enforce that at some point,” Spalding said.

Life sure was better around here before all the Californians started squatting here.

Enough. These "nuisance" crimes are hurting the quality of life for everyone and costing business owners dearly. Whether it's the homeless trashing our public restrooms or antifa/BLM Marxists spreading their hate, there should be real consequences. As it stands they can commit these so called nuisance crimes with impunity, and that's the problem. E.g. what would happen to the dope who vandalized The Column had they been caught? It would be a wrist slap at worst. That's unacceptable. Corona be damned, they should serve substantial jail time. Spending tax dollars to make examples of some of these stupid, rude people would pay off in the long run.

The writer is justifiably upset about the vandalism and lack of respect for public and private property. However, law enforcement can do only what is Constitutionally-permitted. Even with more money and more officers, ultimately the laws which are enacted, and then enforced, are subject to Constitutional scrutiny. Living in a free country gives citizens broad rights. Most citizens respect the social and moral norms that are required for "the pursuit of happiness" as understood by the Founders, but there are others who have no regard for such norms. The crafting of enforceable statutes is no easy task when individual rights are grounded in the Constitution. My experience in Astoria is that the Police Department goes to extraordinary lengths to protect those rights. Sadly, the result is what the article describes. Fines and jail time are simply not options for some of these offenses. For those acts which are punishable offenses, then we need to make sure that the Astoria Police Department has all the resources it needs. I do not believe that is the case.

I'm pretty well versed in The Constitution, better than your average bear at least. I can promise you, there is nothing in the Bill of Rights or the remaining 17 amendments that allows for vandalism, littering or defecating on a public sidewalk. I'll eat my hat if you can show otherwise. And since I'm not advocating for cruel and unusual punishment or shirking due process, The Constitution has nothing to do with the discussion.

The APD has its hands tied. That's the point of my original post. They're not allowing people to get away with the aforementioned because they're protecting constitutional rights. They're doing it by direction. There's no point in writing a ticket that won't be enforced or making an arrest when the perp will be released upon booking. We need to change that. If we don't do it soon we'll go the way of San Fran, Portland and Seattle. Our small stature isn't going to shield us from the inevitable.