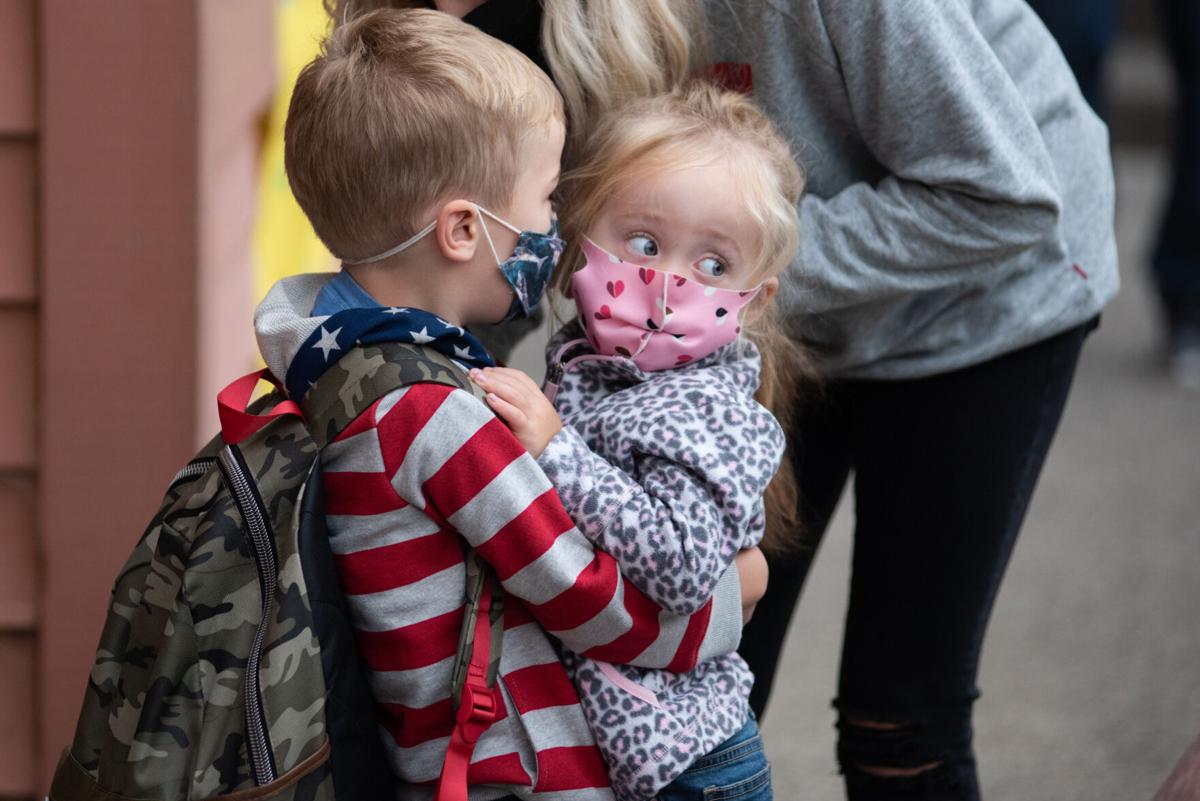 Brody Madison hugs his sister, Harper, goodbye before starting his first day of kindergarten in Warrenton. 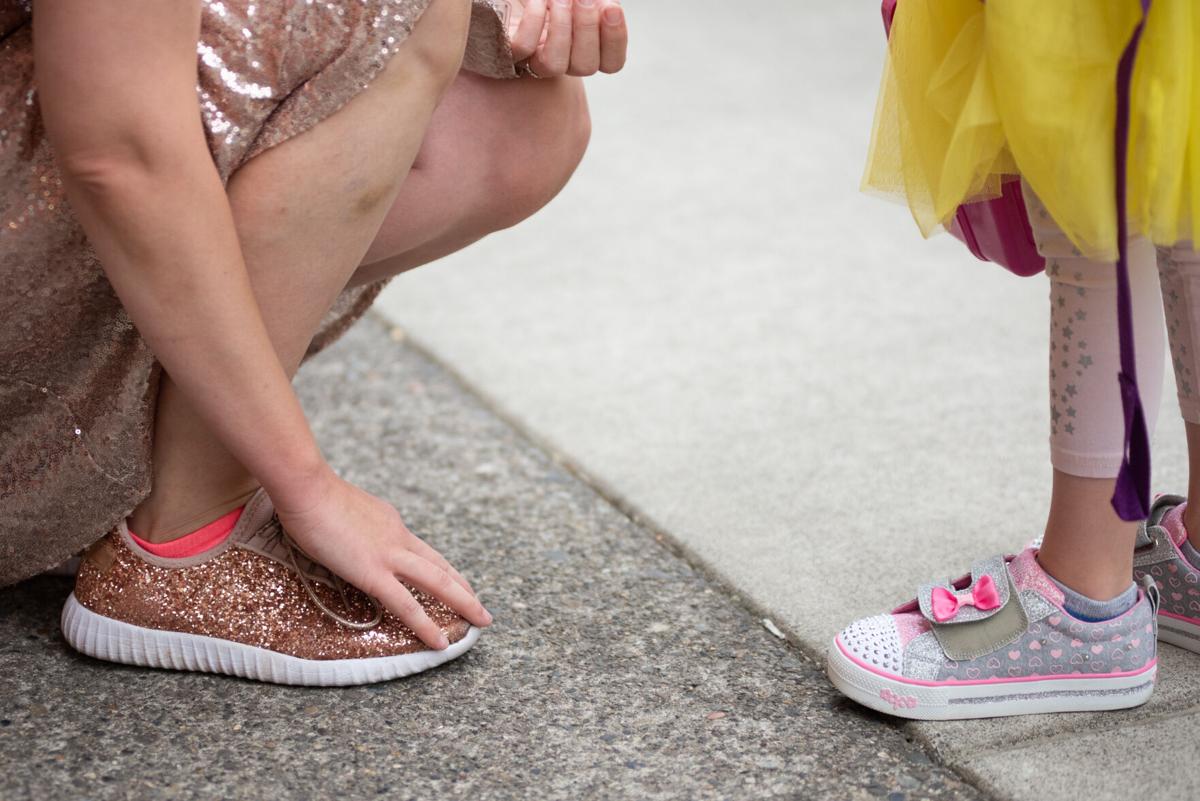 Warrenton kindergarten teacher Laura Phelps bonds with a new student over how they're both wearing sparkly shoes. 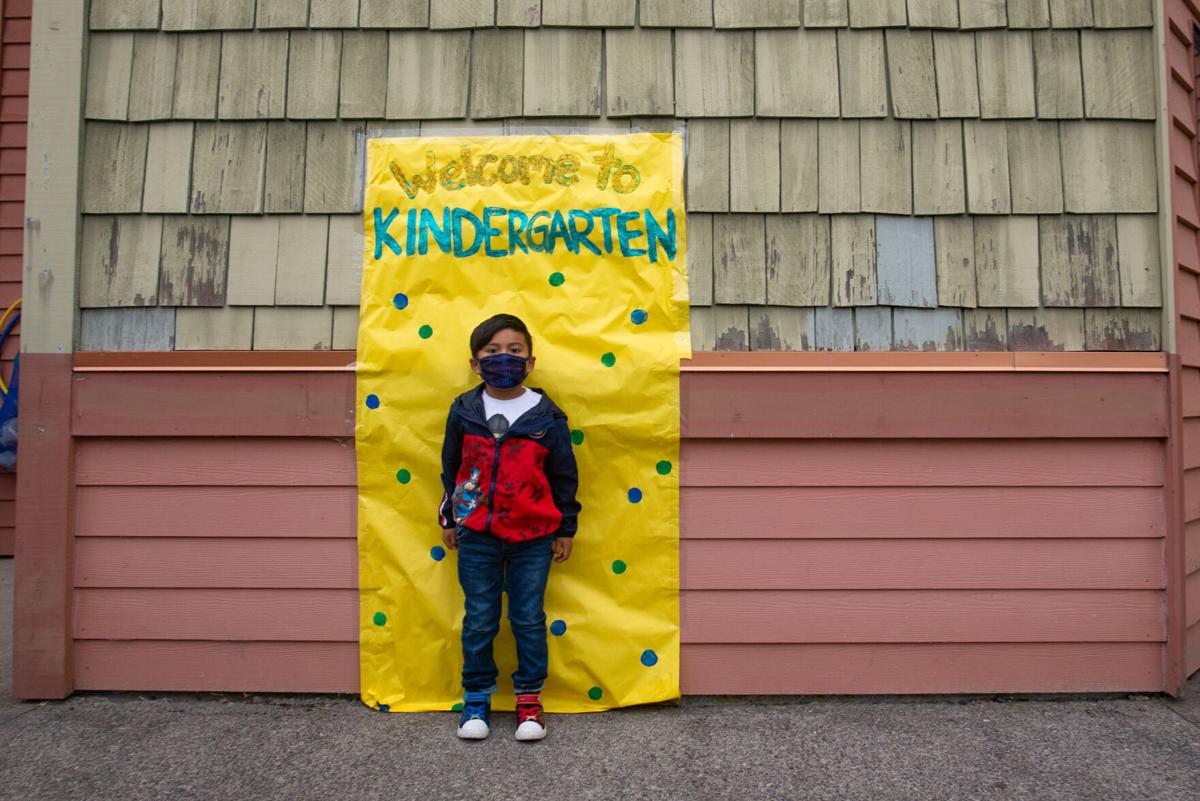 Gabriel Morales stands in front of a ‘Welcome to Kindergarten’ sign on his first day at Warrenton Grade School. 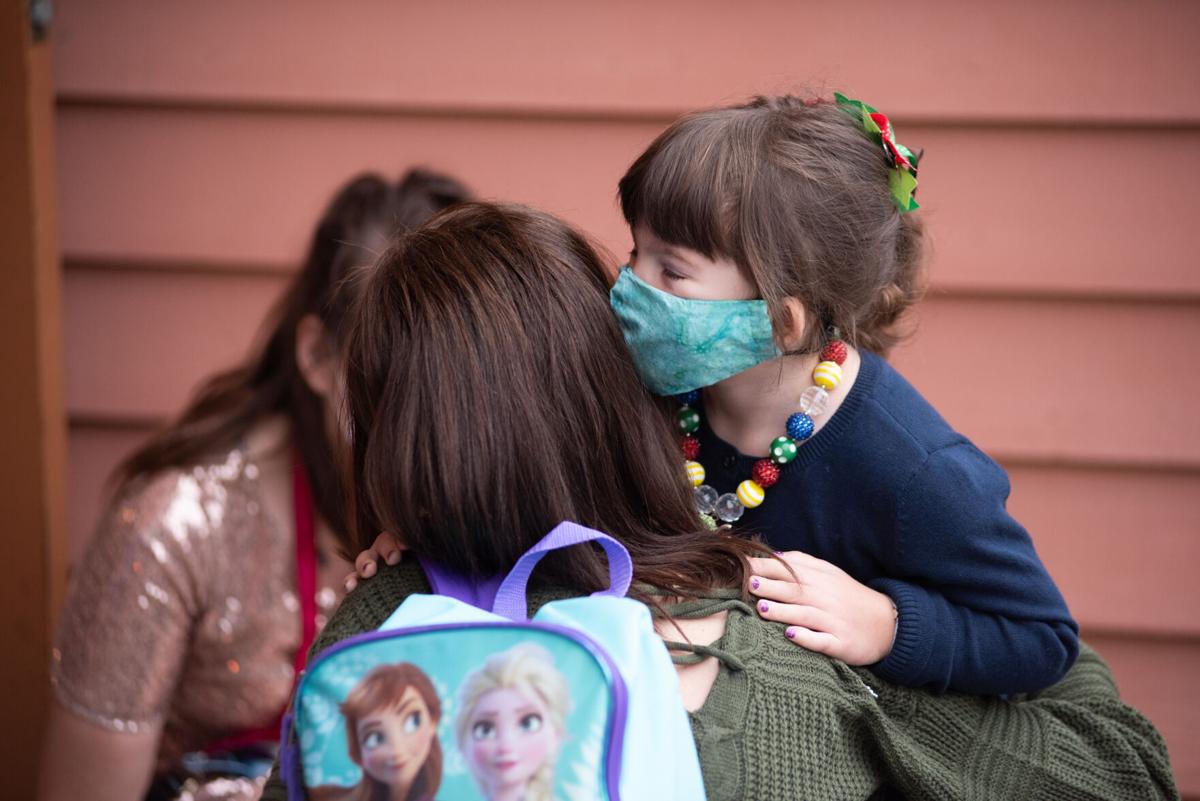 Natalie Renzulli gives her mom one last hug before going into her classroom in Warrenton.

As the new school year launches, the one thing school administrators across Clatsop County can say for certain is that nothing is certain during the coronavirus pandemic.

The small and rural Jewell School District had been the only district in the county able to open to all students under state and county metrics that track the number positive cases of the disease. School was supposed to start Sept. 8, but the district faced emergency closures as regional wildfires and high winds contributed to poor air quality and intermittent power outages.

Meanwhile, following an update from the Oregon Health Authority last week, administrators at the Warrenton-Hammond School District decided to abruptly pivot from opening only to the lowest grades to opening to all grade levels this week. They announced the change on Saturday in a video posted to YouTube.

The school district had planned to welcome back kindergarten-through-third grade students to in-person classes when school began Monday, with higher grades doing online learning only. Now, the district, returning to earlier plans that had been limited by coronavirus metrics, will bring in higher grades, broken into cohorts, two days a week.

“Don’t know how long that’s going to last but we’re going to make it work for the time that we have together,” Rod Heyen, the principal at Warrenton Grade School, said in the video announcement.

Monday marked the first day of school for most school districts in the county. For many students, their classroom was virtual.

The usual flurry and jitters were heightened for many, especially for families with children in grade levels or school districts that would not have in-person classes. Some parents flocked to Facebook groups with questions about whether others had received important emails from district administrators, or with questions about why a child’s school-issued Chromebook wasn’t working.

Schools across Oregon were required to submit reopening plans in August after the pandemic shut school doors in the spring. Many school districts planned for a hybrid model, combining traditional classroom time with online, at-home education. The Astoria School District was the only one in Clatsop County to preemptively opt for a remote-only learning start to the year.

It is a plan administrators and the school board will reevaluate in October. However, they have already begun to discuss the logistics of a full return to school buildings.

“I’m not bringing this to the board because I want to do it right away,” Superintendent Craig Hoppes told the school board during a recent work session on the subject. But, he added, a full reopening involves many moving pieces and complicated logistics. Some of the strategizing needs to begin now, he said.

A graphic on the Knappa School District website shows where the district is at in its reopening plan. For now, an arrow points firmly at a beige, pie-shaped wedge indicating that only the youngest students will attend in-person classes. Fourth grade through 12th grade will attend classes online.

Students in the Seaside School District also had a remote start to their school year, though the district plans to allow students back in buildings on a limited basis if metrics improve.

“I’ve always loved the first day of school,” Jeff Roberts, the principal of Seaside High School, wrote in a Facebook post to the community Sunday night. “There is so much excitement as students enter the building and the energy of a fresh start is palpable.”

This year is very different, he noted. He expected many in the community were feeling a similar mix of emotions: anxiousness, trepidation and concern about the unknown.

“I think it’s fair to say that we are all mourning what we are missing: a return to being together as a school community,” Roberts wrote. “What I know for sure, however, is that tomorrow will not be the day that determines any of our academic or personal fates.

“This is going to be a marathon, not a sprint.”

For parents, the uncertainty has been difficult, particularly for working parents where school may have been their most reliable and affordable form of child care. Distance learning means many parents are taking a more active role in their child’s education and there are concerns about who falls through the cracks: children with learning challenges or language barriers.

Some parents, concerned about increased exposure to the coronavirus, among other reasons, have opted for online academies offered through their school districts. Around 350 students of the approximately 975 students enrolled in the Warrenton-Hammond School District are taking classes exclusively through the district’s online academy, according to Superintendent Tom Rogozinski.

Meanwhile, other parents have decided to leave school districts entirely and turn to home schooling. Some have formed small hubs with other parents or pooled money for tutors.

Victoria Hale, in Astoria, has been home schooling her two children for several years. When schools closed in the spring, she watched as online home-school groups were suddenly inundated with new members looking for options and advice. She saw her neighbors struggle with how to teach their kids.

The family already had a classroom set up in their garage. Hale decided to open it up to other students to help families in her community. She added another table and more chairs and made extra copies of lessons. This school year, she decided she could take on a few more kids.

“It’s not easy to mesh the two different worlds together in just a couple weeks,” Hale said.

Still, she added, thinking of parents who may be trying home schooling for the first time and are feeling discouraged, “The home has always been the ultimate space of learning for their child. It’s where they learned to walk and talk and eat and it’s where they’ll continue to learn their entire life.”

Warrenton’s weekend announcement was a welcome relief to Tawnya Healy. With both of her sons now able to return to school several days a week, the Hammond resident is able to renew her efforts to find a job.

Healy, a newly single parent, had moved back in with family to try to get her footing. When schools shut down in the spring, Healy could not find regular, affordable child care. Suddenly, she needed to be home full time and also help her sons navigate a new kind of school.

Spring was difficult. Both of her sons need the structure of school and the society of other children. They are hands-on learners, Healy said, and they struggled to learn online.

Healy didn’t feel like her oldest son learned anything. It seemed like teachers were running to keep up with all the changes.

Healy told her oldest son on Saturday that he’ll be going back to school for a couple of days a week now. As desperate as he has been for “normal” school, the news did not seem to make an impression.

Everything has changed so often this year, Healy reasoned. Her son wasn’t going to get his hopes up yet.