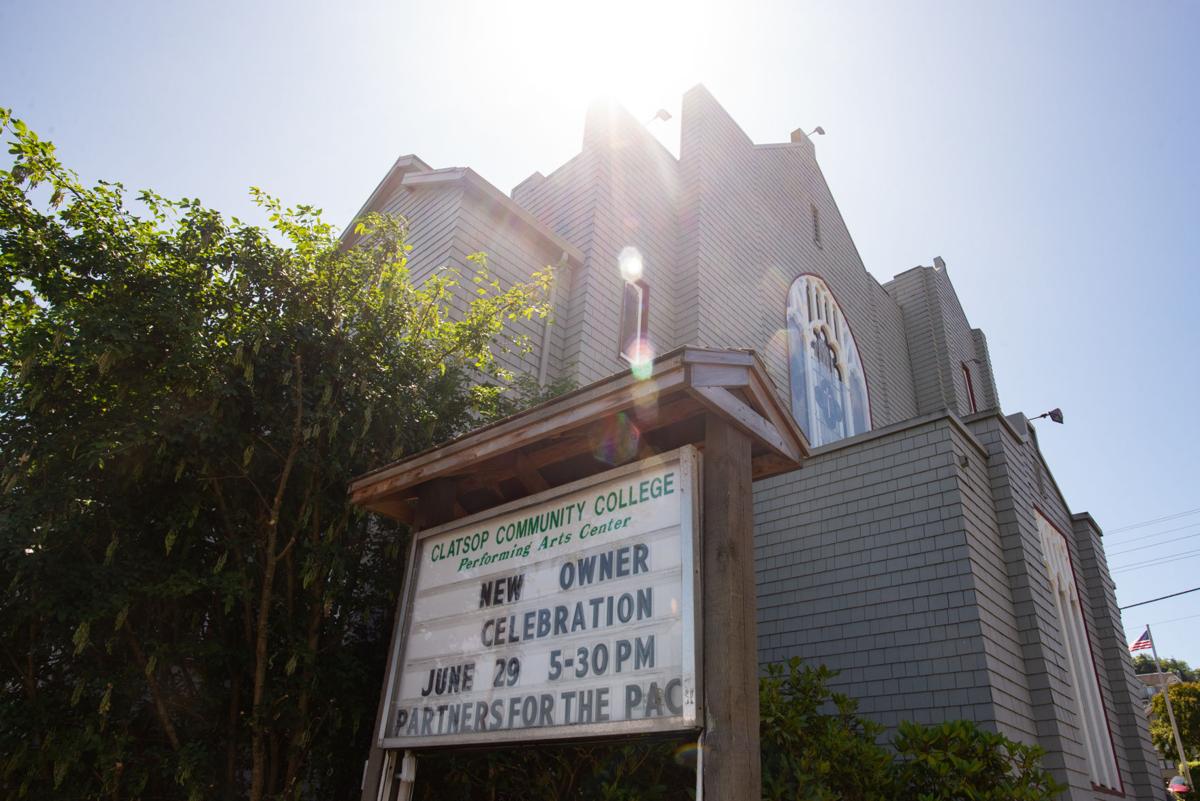 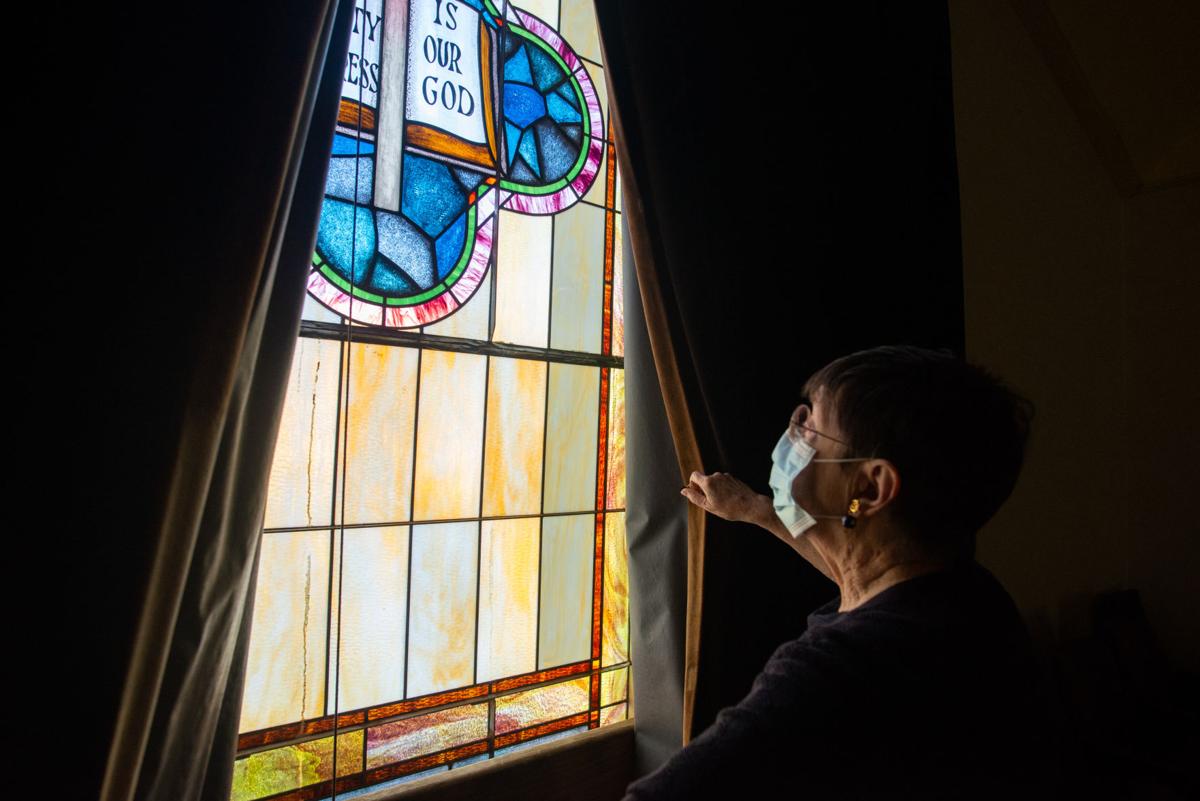 Charlene Larsen pulls back the curtains to one of the building's many beautiful stained-glass windows. 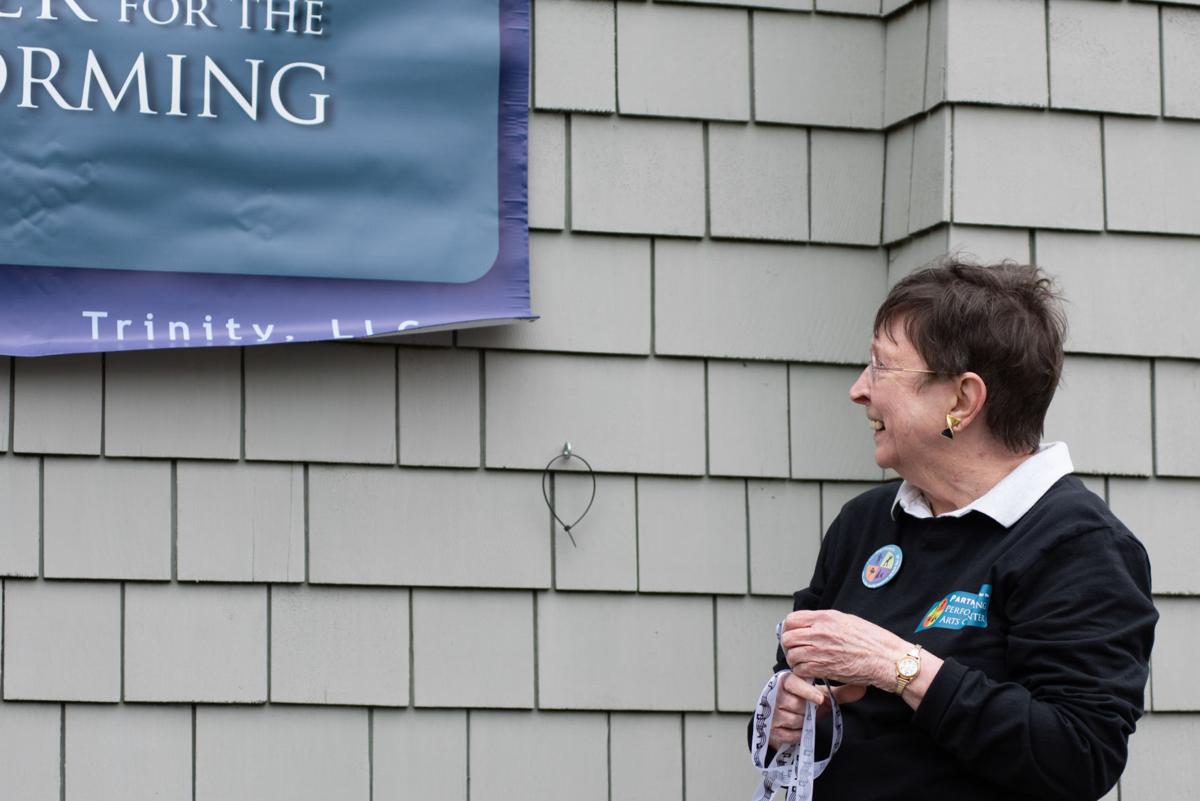 After years of uncertainty, a group that long sought to preserve a cherished North Coast community center feels it is finally on stable ground.

Clatsop Community College has sold the Performing Arts Center to a local buyer, who, in turn, is providing a long-term lease of the facility to Partners for the PAC with the goal of eventually transferring ownership. The two organizations and the buyer held a formal transfer of ownership celebration Monday evening.

The Partners, an arts coalition that includes the Astoria Music Festival and the North Coast Symphonic Band, has staged rehearsals and performances at the former church on 16th Street in Astoria for years.

When the college decided it could not afford to continue operating the facility, curtailed the performing arts curriculum and considered a sale of the building, the Partners fought for preservation as a community center, fundraising and campaigning to keep the doors open.

Monday’s transfer represents the culmination of years of advocacy and effort, but it couldn’t have happened at a stranger time.

In addition to navigating new terrain as full custodians of the Performing Arts Center, the Partners also face a challenge all venues are grappling with: the coronavirus.

The pandemic shut down most traditional live performance venues in the spring and reopening remains a significant hurdle. With state restrictions on crowd sizes still in place and as the number of cases of the disease continues to rise, few venues have a firm plan in place for reopening. Even events scheduled out as far as October still come with a large question mark attached. Certain types of performances might be impossible to stage safely for a long time.

This reality has not dimmed the Partners’ excitement.

“The excitement is pretty high,” said Charlene Larsen, the group’s president. “Moving forward, I think everybody is in a mode to say it’s time to think outside of the box.”

They are approaching the future “with eyes wide open,” she said.

When the coronavirus began to spread, performing arts venues were the first to close — “and we’re going to be the last to open,” said Jennifer Crockett, executive director of the Liberty Theatre.

Crockett is helping to facilitate regular Zoom calls with other performing arts organizations. They talk about how people are doing, what funding sources are available, what advocacy is occurring and the various, often shifting guidelines for reopening. They also try to provide mental support for each other.

“So many of these organizations, the people that run them, this is their lifestyle,” Crockett said. “It’s wrapped up in your mental well-being as well as your financial well-being.”

Theaters, dance studios and other venues and studios are facing the same conundrum restaurants face, Crockett said. How do you pencil out reduced capacity while also meeting staffing costs? How do you make events safe? Will people come?

But in this future, the Partners believe the Performing Arts Center has some key advantages.

It is a fairly large venue, but not too large — the “little sister of the Liberty Theatre,” said Kit Ketchum, a board member of Partners for the PAC.

It is large enough that organizers believe an audience and performers will be able to maintain the recommended distance from each other to prevent the spread of the coronavirus. But not so large that the possibility of a smaller audience or performance automatically means a less profitable or less compelling show.

It is also a versatile space and has been used to host everything from classes to debates, in addition to musical and theatrical performances. It fills a true community niche, said executive director Bereniece Jones-Centeno.

The center has always been a place for community discourse, she added. She and other board members believe the social tumult of the coronavirus and deeper cultural and social questions raised by recent events like the nationwide Black Lives Matter protests provide an opportunity to go deeper with events and speakers.

“The events that reflect who is Astoria and what its environs are, the voices that we might not have heard have been heard at the PAC and they will continue to be heard,” she said, adding that the Partners themselves made a statement when they hired her, a Black woman, to be their executive director.

Constance Waisanen, a local financial adviser and former board member for Partners for the PAC, is the reason the Partners now get to wrestle with programming questions, reopening challenges and the old building’s maintenance needs in a much more direct way.

She purchased the property from the college with the intent of giving it to the Partners in the future.

She is not wealthy. She is not building an arts empire, nor does she plan to use the building in any other way except to offer it as a community performing arts center.

“I think I pretty much have everything I need in this life,” Waisanen explained. “I felt like I wanted to do something good for the community.”

She worried if someone didn’t step up, the building could be sold away from community use or razed to make way for something new.

“Most of us don’t think big enough about what we’re actually able to do as an individual,” she added. “It’s just imagining on a bigger scale.”

She believes in the power of art to change and enhance lives and thinks it is especially important to expose young people to art. She and Larsen are both eager to offer more educational opportunities out of the center, much as the college once did.

If Waisanen opened the doors to ownership, though, she is adamant that Larsen is the woman who brought the group to this point, the anchor for everything else.

Larsen has “done everything from cleaning the toilets to meeting with (state Sen.) Betsy Johnson and (Congresswoman) Suzanne Bonamici,” Jones-Centeno said. “She is on all sides of this thing … That woman has been the force behind the life of the Partners for the PAC.”

“She is a force. I wish I had her tenacity and fortitude.”

Waisenan retained the right to rename the building if she wanted to. Unknown to Larsen, she chose to rename it the Charlene Larsen Center for the Performing Arts.