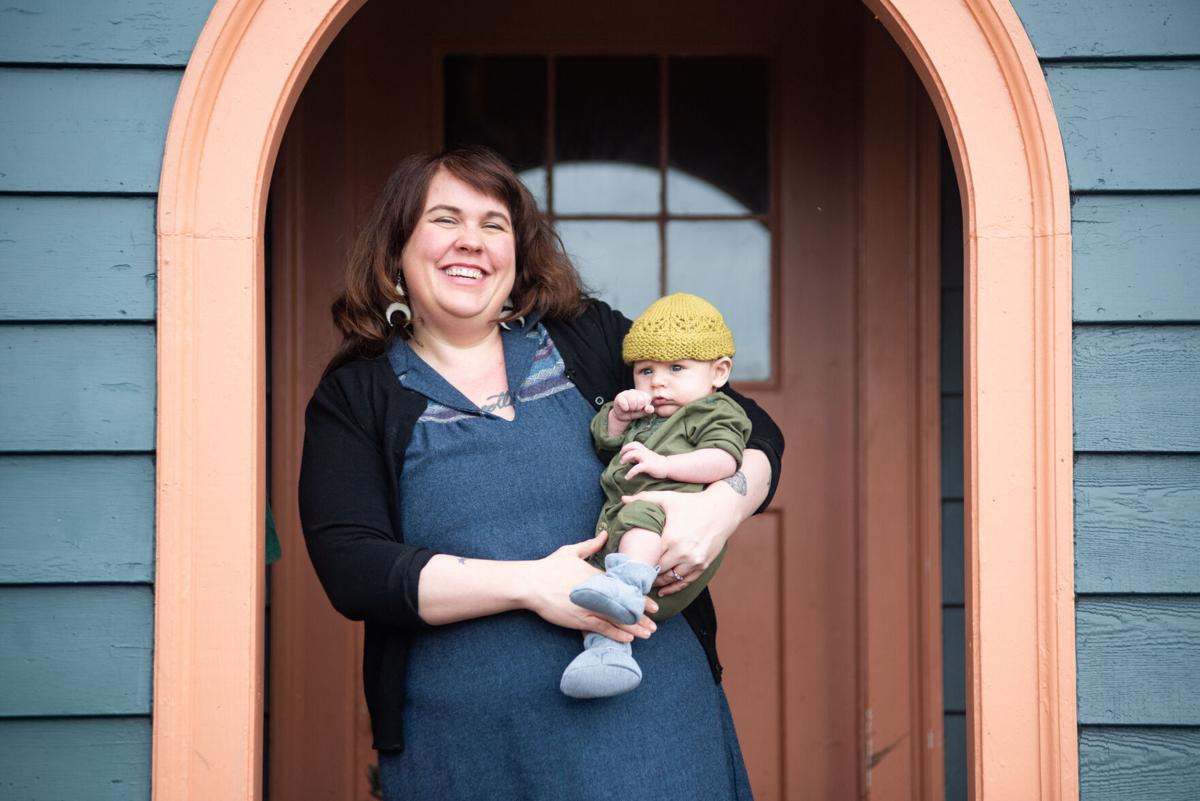 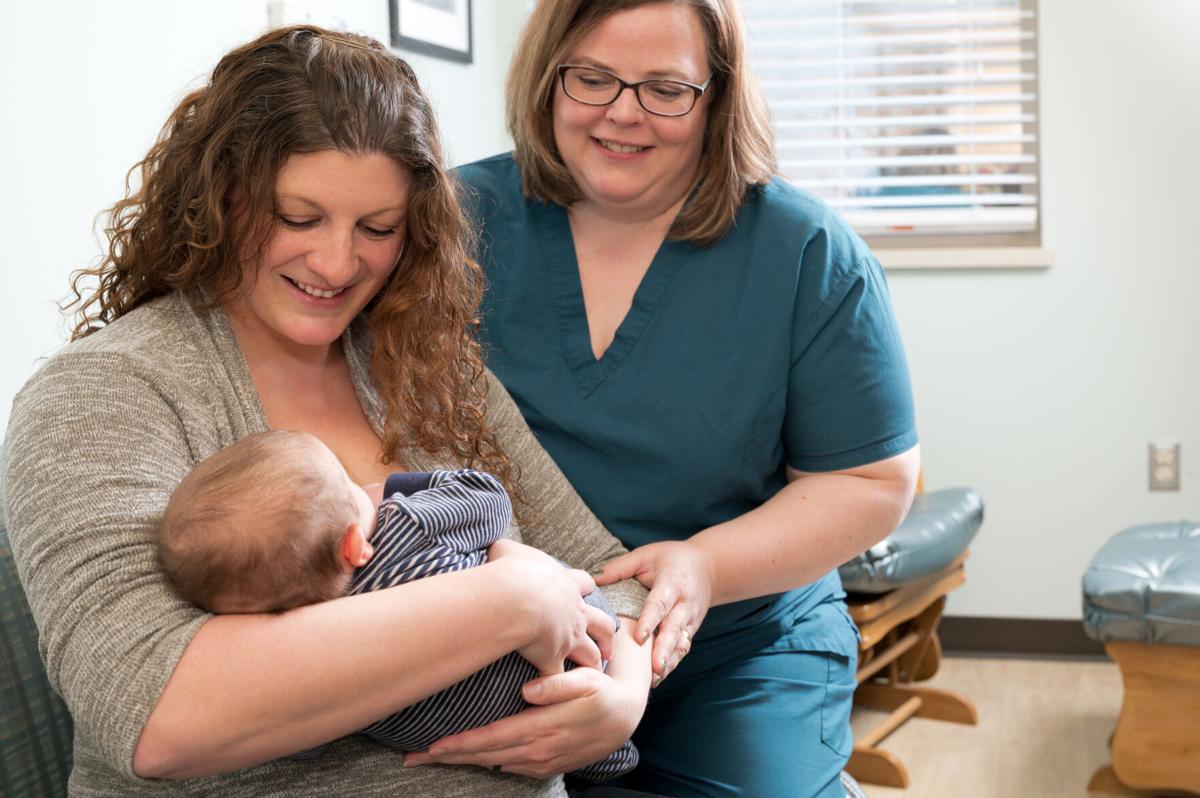 Columbia Memorial Hospital nurse Laura Brown helps Amanda Harlacker with her son in the early months after his birth in 2020. 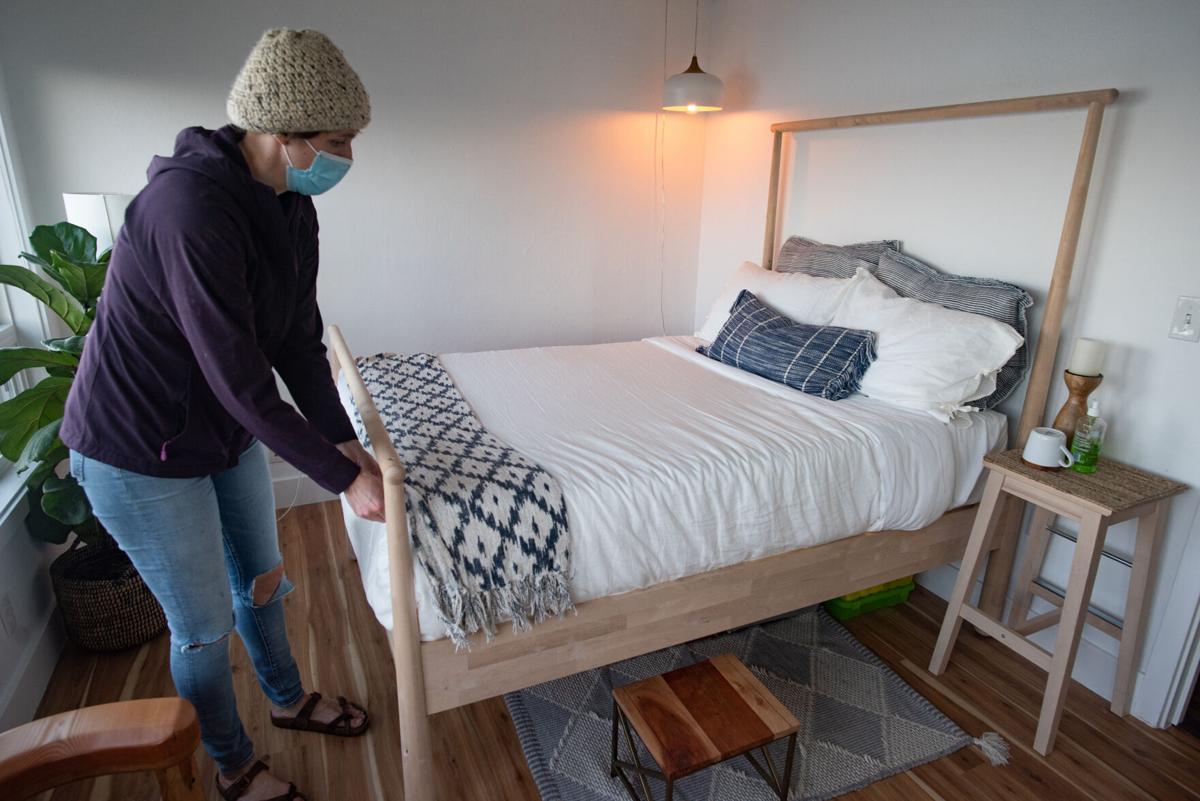 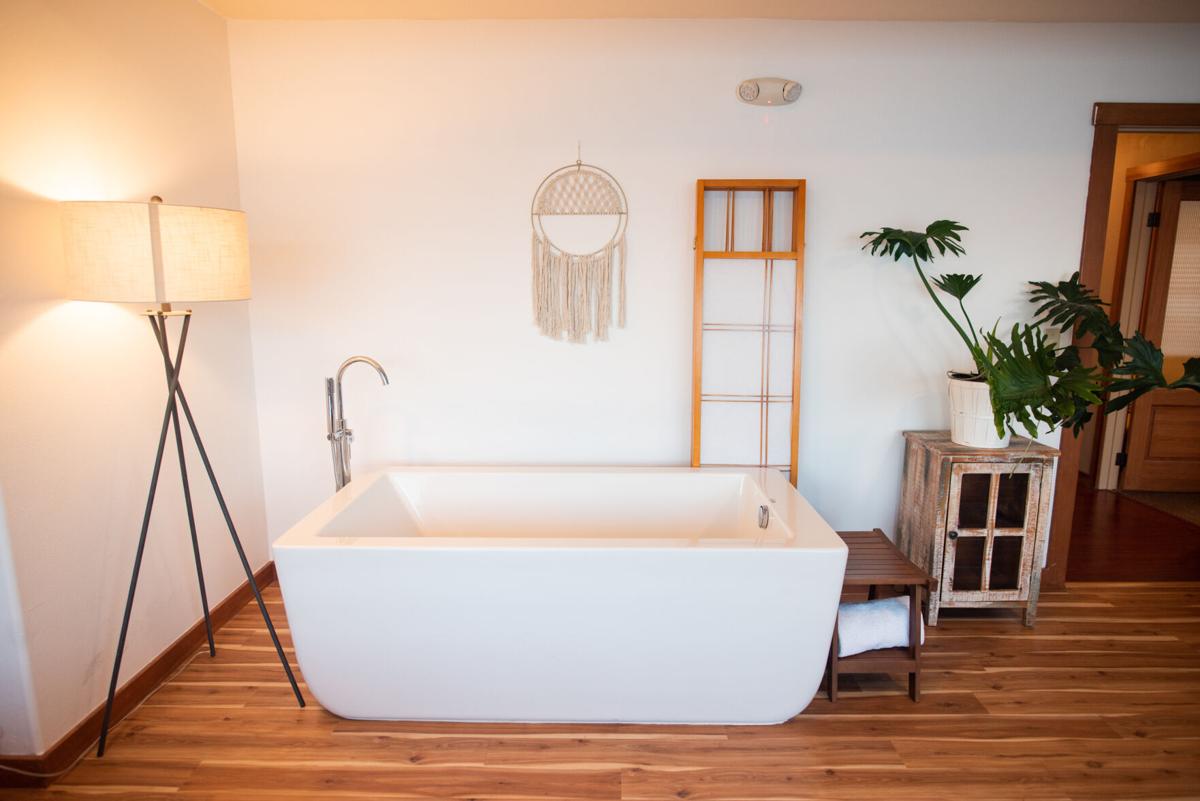 In the final weeks of her pregnancy, Lisa Schuyler would walk past a mirror and realize with a jolt, “Oh, I’m really pregnant. I forgot.”

The coronavirus pandemic — and 2020, in general — had been very distracting, a difficult and bewildering time for many people on the North Coast.

For pregnant women, the pandemic shaped many of their decisions and options. No one knew what effect COVID-19 might have on pregnancy and hospital policies changed often to adapt to new information about the disease.

Though the women The Astorian spoke with had planned for their pregnancies, none had expected the many turns the year would take.

Schuyler fielded calls at the front desk of the Clatsop County Public Health Department, answering questions, many of them related to the virus, and directing people to resources. She attended regular briefings and scoured social media to see what kinds of questions were popping up about the disease so the department could be prepared.

It felt good to help people in this way and she had support for her pregnancy at work. She tried to push down her own anxiety, but a significant part of each day was spent contemplating and analyzing a still unknown disease as it spread across the country and into her own community.

For some, with so much of life shut down, it was nice to avoid the uncomfortable interactions with strangers that pregnant women often endure — the probing questions or the unwanted touch to your swelling belly.

But the usual ways to mark moments and emotionally prepare for the baby were also absent — something Schuyler felt keenly ahead of the arrival of her second child.

For many women, baby showers happened over Zoom or other video chats or became drive-thrus, people shouting congratulations from their cars. Pregnancies advanced in relative solitude with visits from family members and friends often being highly organized affairs requiring complicated plans of isolation or quarantine ahead of time.

Schuyler believed hospitals were safe, but she decided to go with a home birth. She wanted to be where she was comfortable, surrounded with people she had chosen.

When the pandemic became a reality on the coast, Nehalem-based midwife Jennifer Childress wondered if she’d see a boom in families seeking home birth. Local hospitals had tightened policies around who could be in the room during labor and delivery. Some women faced child care dilemmas if a younger child couldn’t accompany them to the hospital for the birth.

A boom didn’t materialize. But some women transferred to Childress’ care who had been planning to go to the hospital before the pandemic hit. Home birth was something they had previously considered, she said, but the pandemic “tipped them over.”

“I strongly feel people need to birth where they feel safest and that is different for everyone,” Childress said. “It’s challenging birthing in the hospitals right now, but it is the right place for a lot of people and the same with the birth center (in Astoria). All of those choices are really good choices.”

In some ways, the Astoria Birth Center, which opened last summer, was well-suited to operate during a pandemic, said owner Rebeckah Orton. It was never intended to be a high-volume facility and could adapt quickly to new recommendations and public health guidance.

“You’re never going to have a bunch of people crowded into one area,” Orton said, adding, “It’s not where sick people go. It’s a place where people are going when they’re healthy. ... You’re separating a vulnerable population from a sick population.”

During 2020, the birth center saw women who chose the facility because they knew they could bring partners, family members and support professionals like doulas with them. Others turned to the birth center looking for middle ground.

For Astorians Amanda Noyes and Regina Mysliwiec, the birth center was a compromise between Noyes’ interest in home birth and Mysliwiec’s desire for a more clinical setting. But when Noyes’ labor went on and on without much progression — 46 hours would pass from the time of her first contraction to the birth of her daughter — the couple decided to transfer to Columbia Memorial Hospital, where Mysliwiec works as an emergency room doctor.

For them, the timing worked out, though. The hospital’s visitor policy at the time allowed for two people in the room. Their doula stayed with them.

Policies have shifted many times at local hospitals during the pandemic, but hospitals have looked for new ways to support patients.

Columbia Memorial now offers devices to patients who want to “bring” another person besides their partner or spouse into the room with them. Providence Seaside Hospital reviews requests for extra guests during labor and delivery and makes exceptions to its rules if patients need the additional support.

Doulas, professionals who provide emotional and physical support to pregnant women, have turned to FaceTime to connect if hospital policies do not allow them to accompany a client.

Michael Adler, an obstetrician-gynecologist at Providence Seaside, remembers the early days of the pandemic as a constant worry about surfaces. He’d go into a room and worry about touching a box — did it have the coronavirus on it? — or wonder if he should immediately wipe down a counter after he set his hand against it. Small actions, but every one of them questioned and analyzed with ever-evolving information.

Now, closing in on a year into the pandemic, the precautions that once felt so strange and fraught have become routine.

They continue to provide education and coaching to patients, but now when Katherine Davidson, the inpatient nurse manager at Providence Seaside, steps into a new mother’s room, more often than not the woman’s partner is already automatically pulling a mask on.

Kendra Gohl, the director of nursing at Columbia Memorial and the hospital’s infection preventionist, feels she has seen an increased sense of empathy and concern among the nursing staff, particularly in the hospital’s family birthing center.

“As you take away guests and visitors, that really impacts the patient,” she said. Communication becomes even more important.

For Childress, communication and connection are key components in her midwifery practice. She’s in clients homes for hourlong visits ahead of the birth and the entire family is often involved.

As the pandemic continued, she realized these appointments were lasting for longer and longer periods of time. The questions, concerns and thoughts were much the same. What had changed was the isolation.

“Here I am coming into their home and I’m one of the few people that is,” she said.

Pregnancy can raise many existential questions. During her own pregnancies years ago, Childress remembers wondering, “What kind of a world are we bringing children into?”

“That question, it’s not a new idea,” she said, “but it just seems like it’s gotten so much more dire than even 30 years ago.”

For Erica Ditch, the timing couldn’t have been stranger. She woke up on March 16, found out she was pregnant and went to her job at a dentist office in Astoria like normal. Later that day, Gov. Kate Brown announced the first shutdown to curb the spread of the virus in Oregon and the dentist told his staff the office would have to temporarily close.

“What are we doing?” Ditch wondered in those early days as everything changed around her. “We’re bringing a baby into this world that’s not even going to exist in another month.”

Still, being temporarily out of a job meant Ditch was able to accompany her husband, a commercial fisherman, to Alaska for the early months of her pregnancy. They spent one-on-one time together that would have been impossible otherwise.

When her stay in Alaska put her out of network for her virtual doctor appointments, she switched to the Astoria Birth Center and had an unmedicated childbirth — an experience she cherishes.

Like many of the women The Astorian interviewed, she spent most of her pregnancy away from others, limiting her activities. Now she is weighing the pros and cons of returning to work. It’s hard to contemplate such a full return to the world, she said.

Brownsmead resident Hilary Levine had her son in the fall. She spent much of her pregnancy in isolation, working from home. Her husband, a fisheries biologist, ran most of their errands.

Though her son has received his first round of vaccines he has yet to set foot in a store. Levine takes him to the doctor and on walks around Brownsmead. She hopes to throw a birthday party for him at the Brownsmead Grange when he turns 1. It might end up being his first real public appearance.

For now, she said, “I think I’m pretty resigned to the fact that it’s going to be this way for us for a while.”