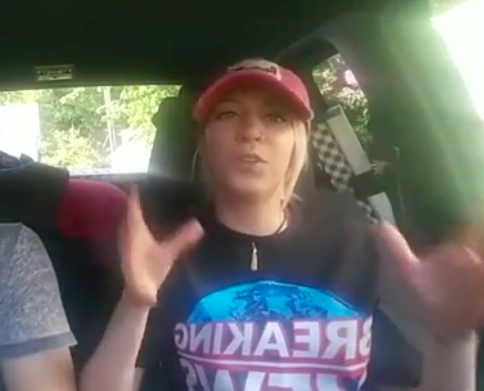 Haley Adams in a YouTube video advocating for reopening the beach. 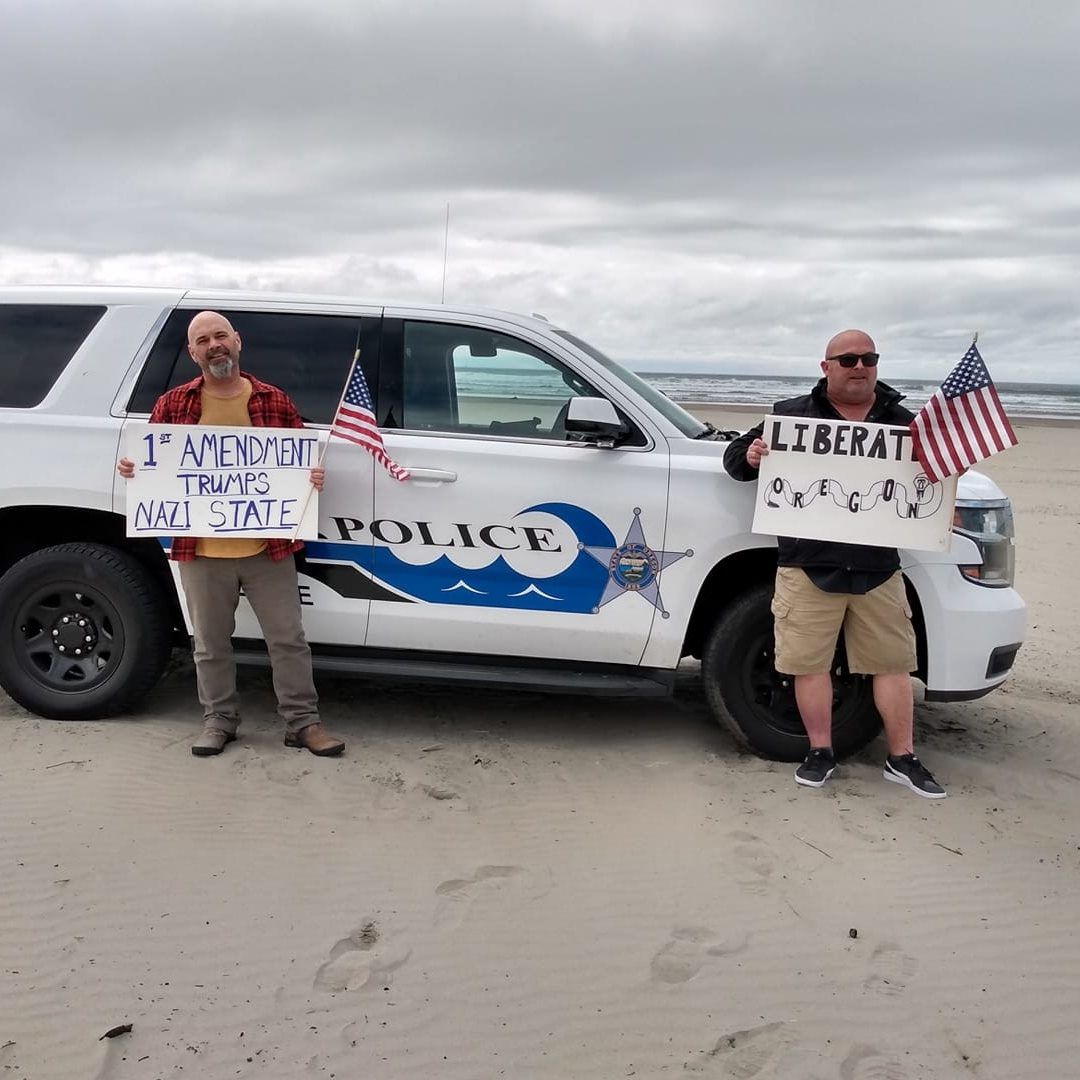 Miles Rudduck, left, at a protest in Seaside in April.

SEASIDE — City officials and residents fear a demonstration against coronavirus restrictions planned at the Prom at noon on Saturday could serve as a flashpoint.

Reopen the Coast describes itself as dedicated to “stopping the revocation of individual and business rights in the state of Oregon.” More than 200 people indicated interest in the three-hour gathering led by Haley Adams, an activist in Portland’s alt-right.

Reopen the Coast is “a peaceful event and not a protest,” Adams said. “It’s just a gathering of folks speaking and not creating any harm.”

Others aren’t so sure.

Ties between the organizers and the Proud Boys and Patriot Prayer — groups that have been involved in violent clashes in Portland — are strong enough to concern city officials.

“We aren’t Proud Boys nor Patriot Prayer,” Adams said. “We are individuals.”

But, Adams added, she has “nothing bad” to say about the Proud Boys or Patriot Prayer.

Clatsop County Sheriff Matt Phillips said the sheriff’s office is paying attention to the demonstration and that he has been in communication with Seaside Police Chief Dave Ham.

Phillips said the county has partnerships with other sheriff’s offices that can come and assist if needed. “Sheriff offices work very well and cooperatively around the state to support each other in a number of functions, and this would be one of them,” he said.

The local Facebook group, Seaside OR Reopening Discussion, reposted the event invitation, to a clamor of remarks.

David Posalski, the administrator of the Facebook group, said the group has no affiliation with Reopen the Coast, and he asked organizers to cancel the event.

“They have zero reason to be in our community,” Jimmy Griffin, of Seaside Brewing Co., said of the organizers. “We don’t need these people coming into our community lecturing us on our First and Second amendment rights. They’re not contributing one positive thing to what we’re doing here. They’re just here hoping to cause chaos like they do everywhere else.”

Portland resident and co-organizer Kareem Jamahl Patton said he was “fed up” with Gov. Kate Brown’s response to the pandemic. “Do you really think shutting down their economy helps the state of Oregon as a whole? I’m not convinced,” he said.

Patton said the lockdown restricts beach access to those who own homes on the coast. “Literally only very wealthy people are allowed to visit the beach,” he said.

Astoria resident Miles Rudduck, who joined in a Seaside beach closure protest in April, said the effects of the lockdown outweigh the risk of the virus’s spread.

People are going to die “no matter what,” Rudduck said. “Staying home and watching this happen is much worse than getting out and living their lives.”

The City Council was expected to discuss reopening the beach on Monday night. Will participants at the demonstration violate city orders if the beach remains closed on Saturday?

“That is something that we will probably see as it plays out live,” Rudduck said. “I think these things kind of unfold as they unfold.”

Griffin said Seaside “literally needs to ignore these people. Let them come out and film each other giving each other coronavirus. We need to stay home and let this pack of screaming seagulls tear each other apart.”

First of all I would like to Welcome these folks who are standing up for their Constitutional rights that many men and women died for .

It's pathetic how easily people give those rights up to the government. The government works for us!

If Jimmy Griffin wants to live in fear that's his business. I for one will not!

America belongs to us all!!

I served this country for six years, two years in combat.. two years in the back of an ambulance.. so don't tell me where I'm allowed to go and enjoy myself.

Here are the facts of the matter.

compare monthly death totals to this year and they're exactly on par..

University of Washington’s Institute for Health Metrics and Evaluation (IHME)

this organization is responsible for the salacious projections which were used to justify the lockdown, they are now projecting that due to the decrease lock down that we will see increased death.. I want everybody to know that in 2016 and in 2017 over 500 million dollars were donated to this organization from the Bill and Melinda Gates foundation.. they are lying to us they are buying our liberty and shredding it.

Here are the facts of the matter.

compare monthly death totals to this year and they're exactly on par..

University of Washington’s Institute for Health Metrics and Evaluation (IHME)

this organization is responsible for the salacious projections which were used to justify the lockdown, they are now projecting that due to the decrease lock down that we will see increased death.. I want everybody to know that in 2016 and in 2017 over 500 million dollars were donated to this organization from the Bill and Melinda Gates foundation.. they are lying to us they are buying our liberty and shredding it.

.. RAISED THE NATIONAL DEBT TO 20TRILLION, AND KNOW THEY ARE GIVING AWAY ALL THE LIBERTY THAT THEY SO FREELY TOOK FOR GRANTED!!!

We each have our individual emotions and opinions concerning the reopening of our beaches in Seaside. Trying to put mine aside I do feel the need to respectfully add some facts to this conversation.

Mr. Griffin, your opinion is that, "We don’t need these people coming into our community lecturing us on our First and Second amendment rights". Perhaps you will more graciously consider the input of a Seaside resident. Our Constitution allows Congress, states, and local governments the powers that are not delegated to the United States by its contents. The first amendment, however, is blessedly protected and not able to be overridden by the Senate, state or local governments. Among other freedoms, the First Amendment allows freedom of speech and the right of the people peaceably to assemble. It does not mandate that any peaceful assembly be held within a neighborhood, county, or even state of residence.

We are living in a surreal time. Fearful of contracting a heartless and cruel virus and potentially infecting others we find our daily lives being controlled by elected officials who have no experience dealing with an unknown virus or a global pandemic. Our fear and our best intentions, however, do not give us the right to think that ours is the only opinion that counts. Winston Churchill wisely stated, "Everyone is in favor of free speech. Hardly a day passes without its being extolled. But some people's idea of it is that they are free to say what they like, but if anyone else says anything back, that is an outrage."

I really hope the city does not let this happen...We have had enuff outbreaks this last 2 weeks and we really do not want it to continue to spread...I hope you think of our community and the common sense we have had thru this and stop it...a lot of ppl are at high risk in the local area...It has been hard enough on us as it is...

That's a tiny number, and most had comorbidities.

That is not a reason to ruin an economy, destroy peoples livelihoods, violate peoples Constitutional rights, and lock down Millions of HEALTHY people.

Stop living in Fear! Turn off the T.V. The media is the REAL VIRUS!

Seaside can not allow this to happen simply by enforcing city ordinances that were written after the riots of the early 1960s. They have a law they can use any time they desire that says that three people or more cannot congregate in pubic as a public safety measure. The city fathers should employ this ordinance or explain to the citizens why they dont.

Stop living you life in Fear! And if you chose to do that, don't expect everybody else to join you.

And another thing to ponder is Kate Brown of course kept alcohol and Lotto open because of all the money she makes from them, whoa what do you know Griffin has alcohol sales. Also just a side note our gas highest in nation again because of brown and tax machine, on east coast gas is 1.26 a gallon

Leaving aside the rest of your complaints for a moment, Jack, there's a simple fact here you're maybe not recognizing, namely that, like it or not, alcohol can be an extremely physically addicting drug. Shutting down alcohol sales statewide would invariably lead to an influx of alcoholics- who would otherwise be maintaining-showing up at ERs with potentially life-threatening withdrawal symptoms.

As long as alcohol is legal (and we know from the 1920s that prohibition doesn't work) there will be some percentage of the population that requires it to function. Would it be better if those folks all got help to quit? Certainly. But the middle of a public health crisis is not the time to add to the hospital burden by sending alcohol dependent citizens into the DTs.

"our gas highest in nation again because of brown and tax machine, on east coast gas is 1.26 a gallon"

And how much state sales tax is there on the "east coast"?

Jimmy Griffin says these people have zero reason being in the community, talking about biting the hand that feeds you M r. Griffin I hope "these people" remember you when it's time to visit seaside after all over.