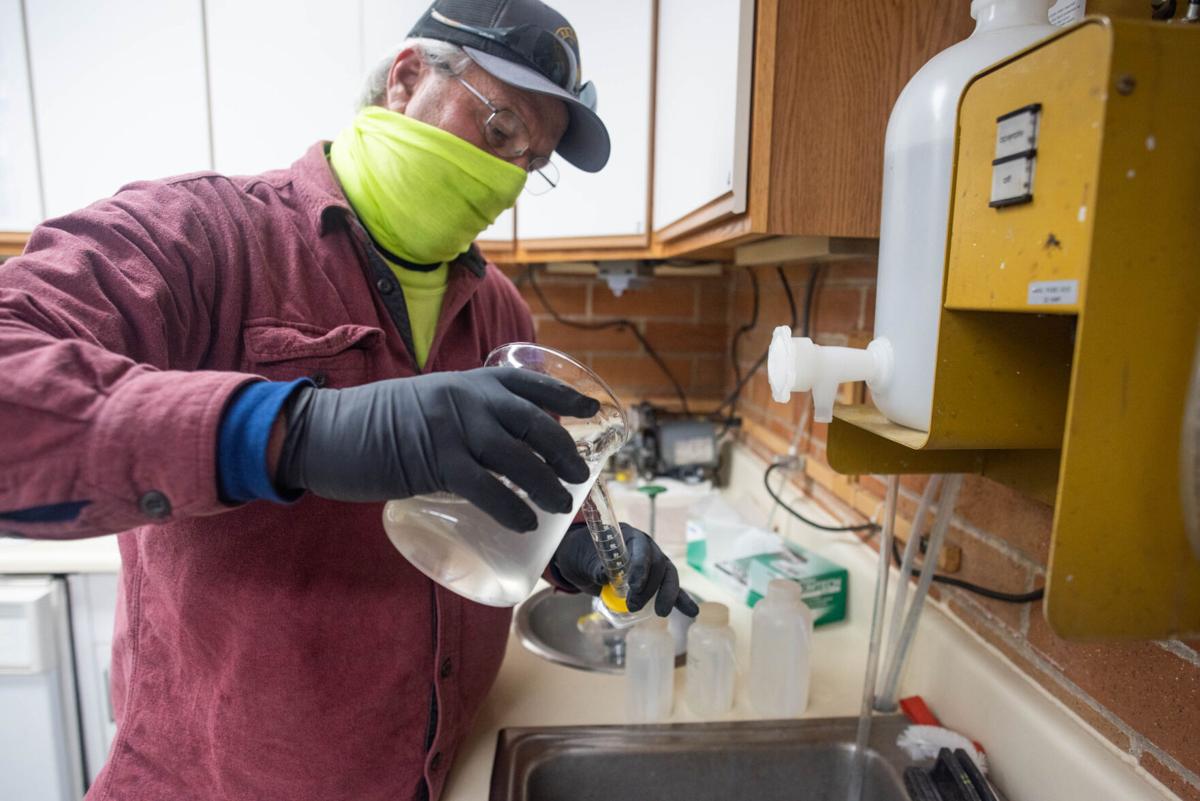 Wastewater treatment operator Steve Meadows takes a sample of wastewater to filter through a quarter-sized paper filter to check for traces of COVID-19 in Astoria's waste. 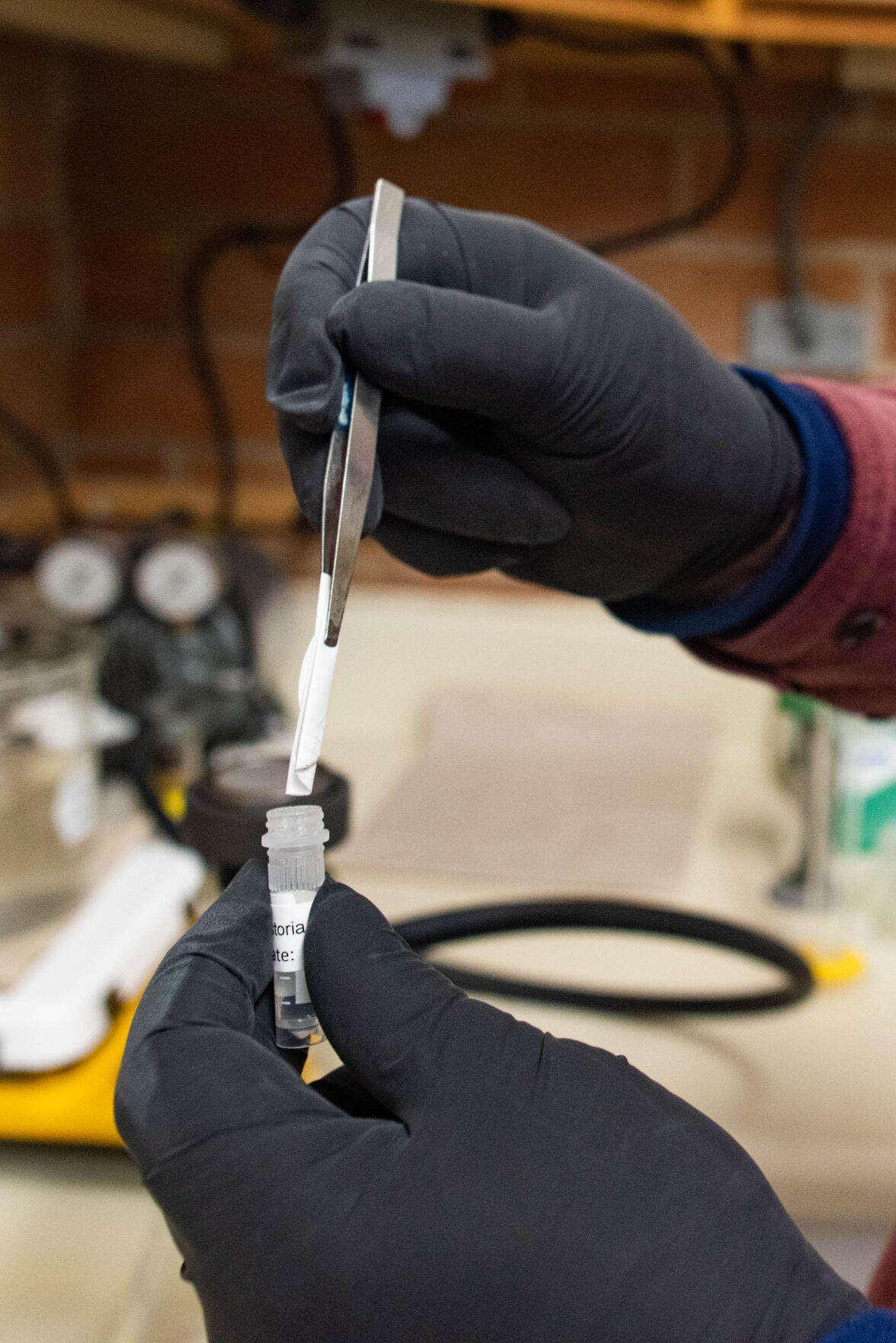 Wastewater treatment operator Steve Meadows puts the small, paper filter into a tube to mail off to Oregon State University for testing. 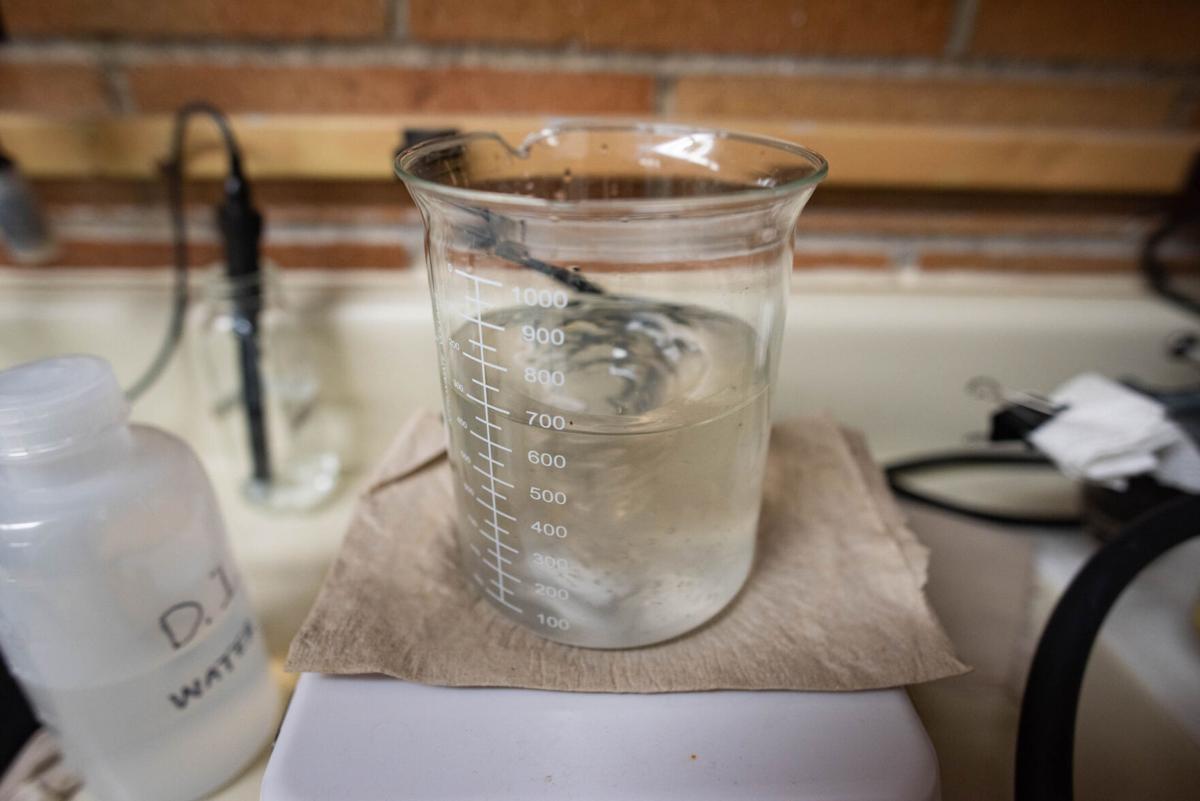 A sample of wastewater whirls around a beaker before testing for COVID-19.

Every Thursday, a public works employee in Astoria takes a special test kit and collects a sewer sample.

And nearly every week since sampling began in mid-September, the result comes back: “SARS-CoV-2 was detected in the Astoria wastewater monitoring site …”

There are a few exceptions — two instances where samples were not able to be processed in October and once at the beginning of November when no trace of the virus was noted — but the presence of the coronavirus in the city’s wastewater is not a surprise to anyone.

Cases in Clatsop County have been on the rise this fall, mirroring an increase across Oregon and the United States as 2020 spirals to a close.

The sampling in Astoria is part of a statewide effort coordinated by the Oregon Health Authority and Oregon State University. As data accumulates from small- to medium-sized communities across Oregon over the coming months, researchers hope it helps deepen their understanding of how the virus is spreading in an area and perhaps even provide an early warning of an impending outbreak.

But it is an emerging science. Researchers are still considering the implications of the data they collect and how best to interpret it.

The sampling underscores the difficulty communities face in getting a handle on the virus even as caseloads continue to grow and state restrictions once again limit businesses, social interactions and travel.

“This will require careful study over several months,” said representatives of the Oregon Health Authority in statements provided to The Astorian, adding, “Unfortunately, in the midst of current widespread community transmission, this early warning signal has limited utility.”

Weekly sampling began this summer. Astoria was added to the list in September and initial data has only recently been made public.

Collecting the sample takes maybe 15 minutes. The most difficult part seems to be removing a filter near the end of the process.

But interpreting what is found in the Astoria samples is complicated by the city’s combined sewer overflow system, which collects rainwater runoff as well as wastewater. Astoria’s sewer flows can get down to about 1 million gallons a day and then surge to 20 million gallons a day during a winter storm, said Jeff Harrington, the city’s public works director.

On stormy days, when the system might suddenly be flooded with water, it dilutes the concentration of the virus. This literally muddies the water when researchers go to look at a sample later and try to understand the presence — and prevalence — in a particular area.

Astoria is unique in the state in that it is one of the few cities that still has a combined sewer overflow system, he added. It isn’t clear how much researchers will be able to drill down into Astoria’s coronavirus load.

Still, the sampling could be a useful tool. In the summer, elected leaders expressed interest in perhaps paying for this exact kind of sampling. Not long after, Oregon State University approached the city about participating in the statewide study, Harrington said.

In other communities, such as Newport, researchers have coupled wastewater sampling with door-to-door sampling. As a result, they have been able to provide a more precise snapshot. The testing helped local officials better understand if efforts to curtail the spread of the virus were working. Certain communities found there was no evidence of the virus.

However, as Tyler Radniecki, a principal investigator on the sewage surveillance team, noted in July, the samples are only just that: A snapshot.

“The results tell us only what was occurring at the time of sampling, not what is happening today,” he said in a statement at the time. “They should not be interpreted as an indication that any of these communities can relax their vigilance.”

Researchers are now seeing evidence of the coronavirus in most communities’ watersheds, the Oregon Health Authority told The Astorian.

“This is consistent with widespread community transmissions and is not surprising given the case counts we are seeing statewide,” the health authority said.