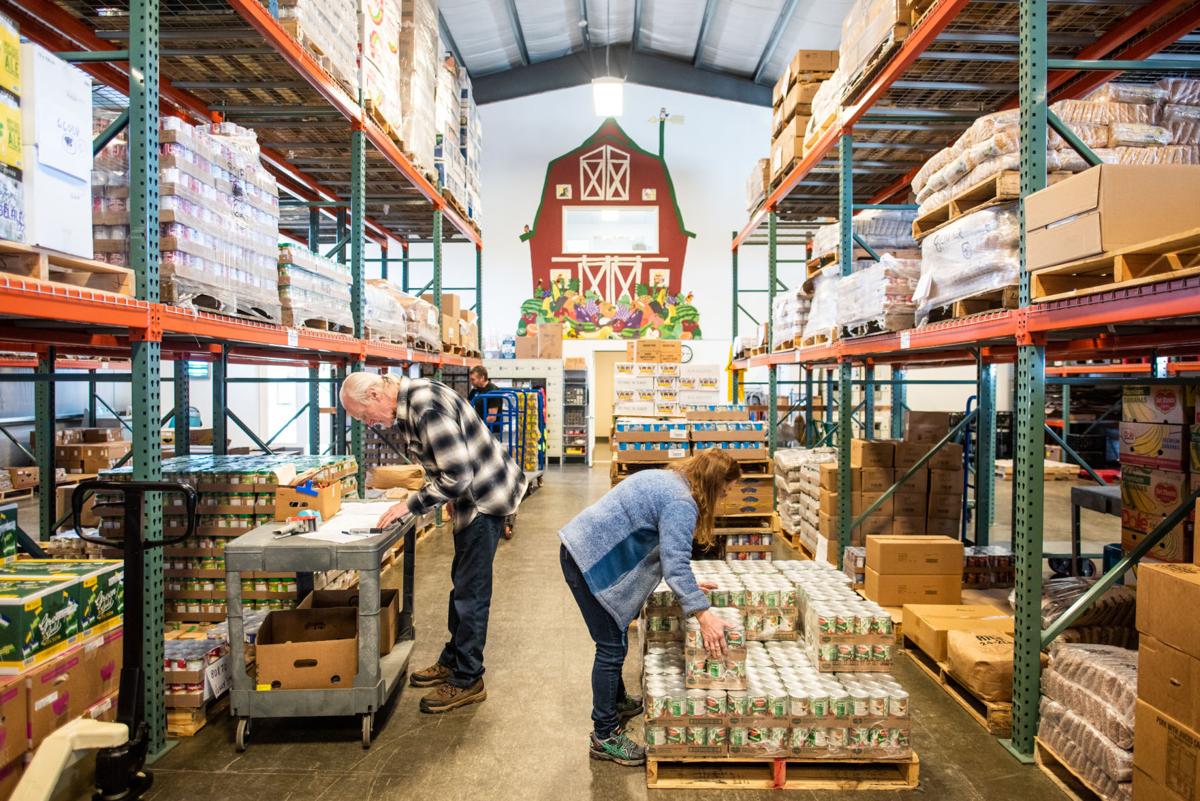 Jack Scroup, left, and Grace Taylor organize and stock shelves after a new shipment of food arrived at the Clatsop Community Action Regional Food Bank in Warrenton on Tuesday morning. 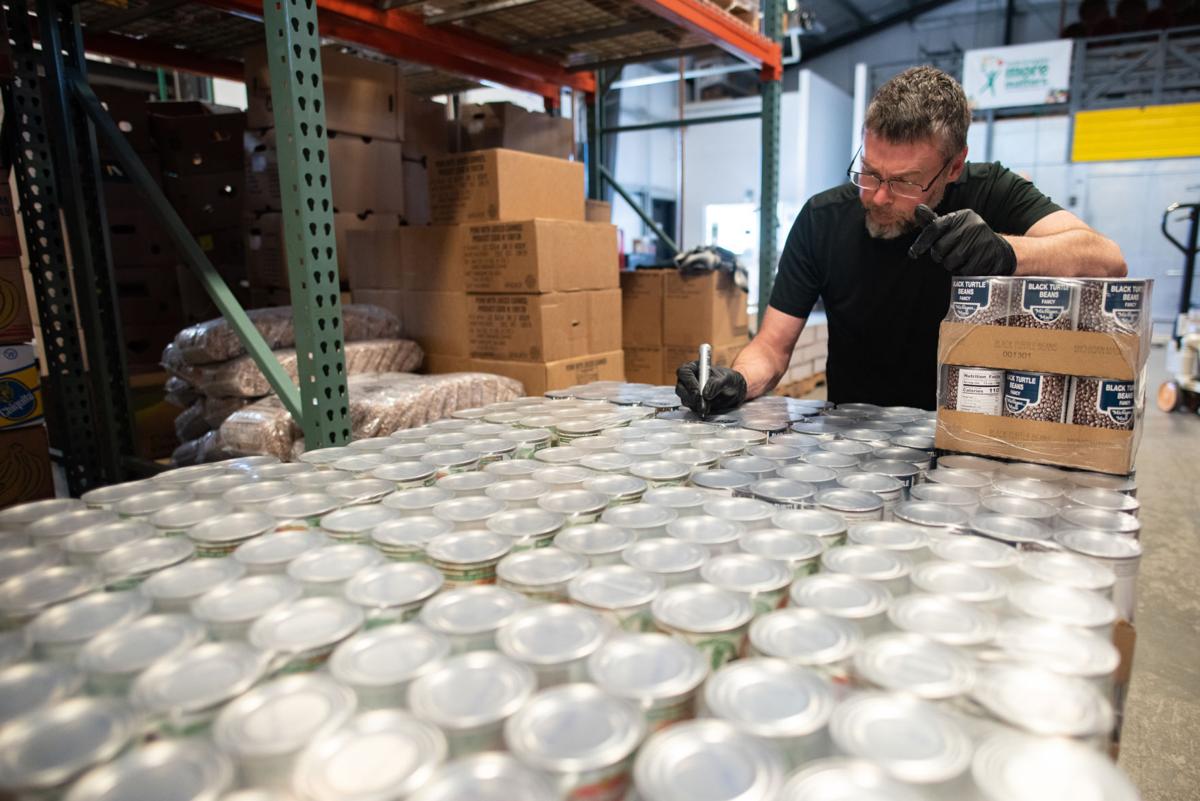 Roger Lindsley organizes a pallet filled with dozens of cans of beans and tomato sauce.

Around 60% of the food bank’s regular clientele are seniors, a demographic considered at higher risk of becoming very sick from the coronavirus. Dusten Martin, the chief operations officer for the food bank, thinks some of them were nervous as cases of the virus began to show up in the Pacific Northwest and stayed home.

But now everything has changed and Martin is bracing for increased demand at the food bank in the coming weeks. It is like a switch has been flipped, he said.

Even though the coronavirus has been a global concern for months, school closures and the restrictions on large gatherings and bars and restaurants made the virus real for many North Coast residents seemingly overnight.

Over the past few days, there was evidence of heightened anxiety about the virus and how it might interrupt daily routines.

Grocery stores were flooded, depleted of toilet paper and, oddly enough, one morning at the Fred Meyer in Warrenton, of grapes. Community groups on Facebook, created to help people connect and exchange information and resources, chart both people’s fears and their efforts to help each other. Numerous posts ask for information about different food pantries’ hours.

With a surge of layoffs at local businesses, some people will be surviving on tight budgets or looking to food pantries and community donations to get by, Martin and others in social services predict.

The school closures bring twin concerns: What will working families do for child care and, for families where food insecurity may be an issue, what will students eat?

Around 53% of students in Clatsop County qualify for free or reduced-price lunches during the school year, according to data from the Northwest Regional Education Service District. Educators say this can be the most reliable meal a student may receive in a day.

Some local groups are rallying to collect food donations to distribute to families in need. Mary Docherty, with the nonprofit Riverfolk, which helps secure state IDs and other resources for the homeless, is collecting food with the aim of providing it to children and seniors.

Docherty plans to work closely with others, like Robyn Koustik of the Astoria Armory, and will reach out to groups like Filling Empty Bellies, which provides free lunches six days a week to anyone in need at Peoples Park in downtown Astoria.

The number of people looking to Filling Empty Bellies for lunch in the past week has stayed consistent with what director Erin Carlsen would usually expect for this time of year.

But as the effects of the layoffs and extended school closures begin to ripple through the community, she thinks the number will grow. The nonprofit already serves families who are either homeless or living in low-income housing or reliant on food stamps.

“My guess is we will probably see more families coming to lunch, like we do in the summer when school is out,” Carlsen said. She believes the stigma of homelessness keeps some people away, but emphasized that the lunches are open to anyone in need.

With the spread of coronavirus, organizations that serve people in need are taking extra precautions.

For Filling Empty Bellies, what used to be a communal meal has become a takeout experience. Food is being served in to-go containers and people are asked not to linger in groups at the park.

Carlsen has also seen a hit to her volunteer force. Volunteers who are over 60 years old are trying to figure out how to continue providing meals while still keeping themselves safe from exposure. The nonprofit had to cancel laundry services this week because the volunteer who runs that program is a Washington state resident in her mid-70s.

“That’s the biggest hit we’re going to see: volunteers needing to protect themselves for whatever reason, which is totally legitimate,” Carlsen said. “As of now, we’re just taking it a day at a time.”

The regional food bank in Warrenton is moving to curbside service to limit people’s interactions with each other.

On a typical Thursday, people would queue up and slowly wind their way through the food bank’s warehouse, stopping at various stations manned by volunteers to take food they wanted, a sort of shopping experience.

“It’s not unusual to have 100 people gathered together at once,” Martin said.

Beginning this week, staff and volunteers will box up food and bring it out to people, who are being asked to stay in their cars.

“We’ll be gloved. We’ll be brief with you,” Martin said. “We’ll put the box in your trunk and wave goodbye.”

Martin has asked pantries around the county that the food bank supplies to adopt similar methods.

The food bank is able to take on additional demand, Martin said, though he wonders what will happen if the coronavirus or concerns about exposure deplete the workforce packaging up food at the Oregon Food Bank. The Clatsop County facility receives much of their food from the larger organization — or the truckers who transport it.

For now, he is planning on a prolonged timeline.