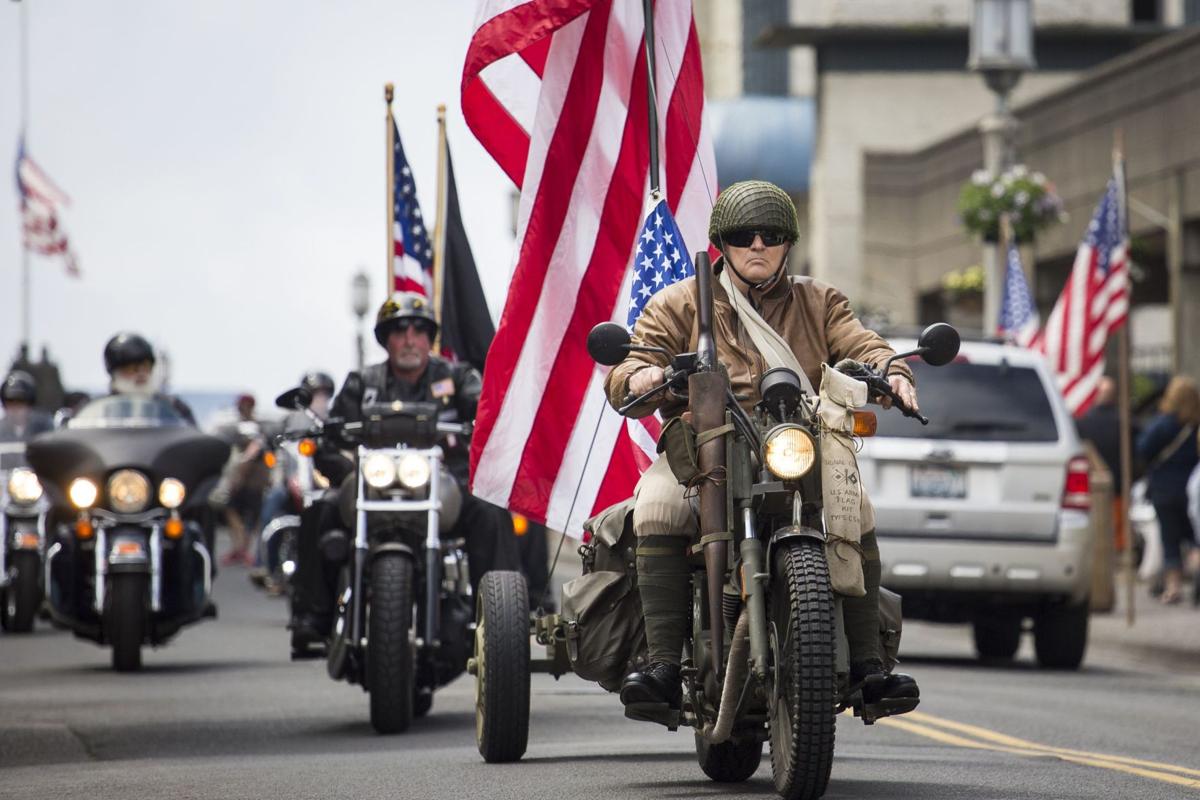 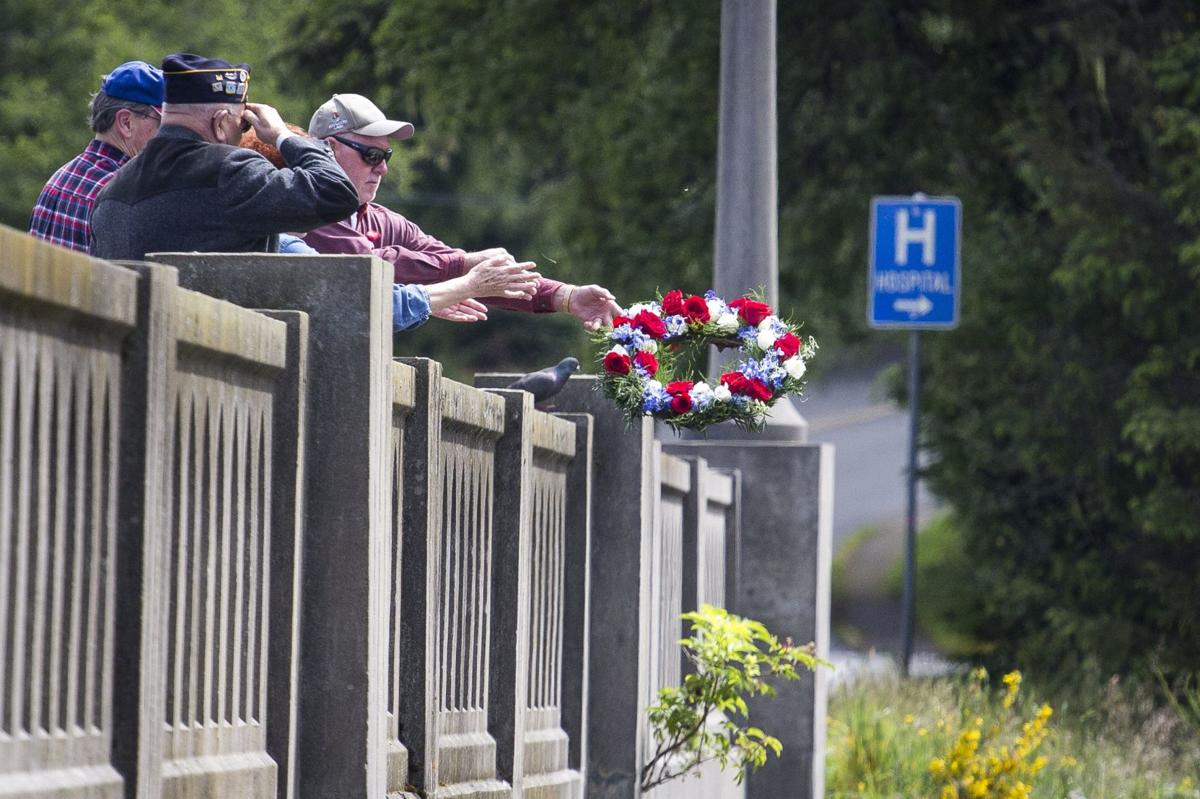 Duane Heller and Jeannette Klefstad toss a wreath into Neawanna Creek during the Memorial Day ceremony at the American Legion in Seaside. At the ceremony they honored Gary Heller who served in the National Guard for eight years from 1961-1969. 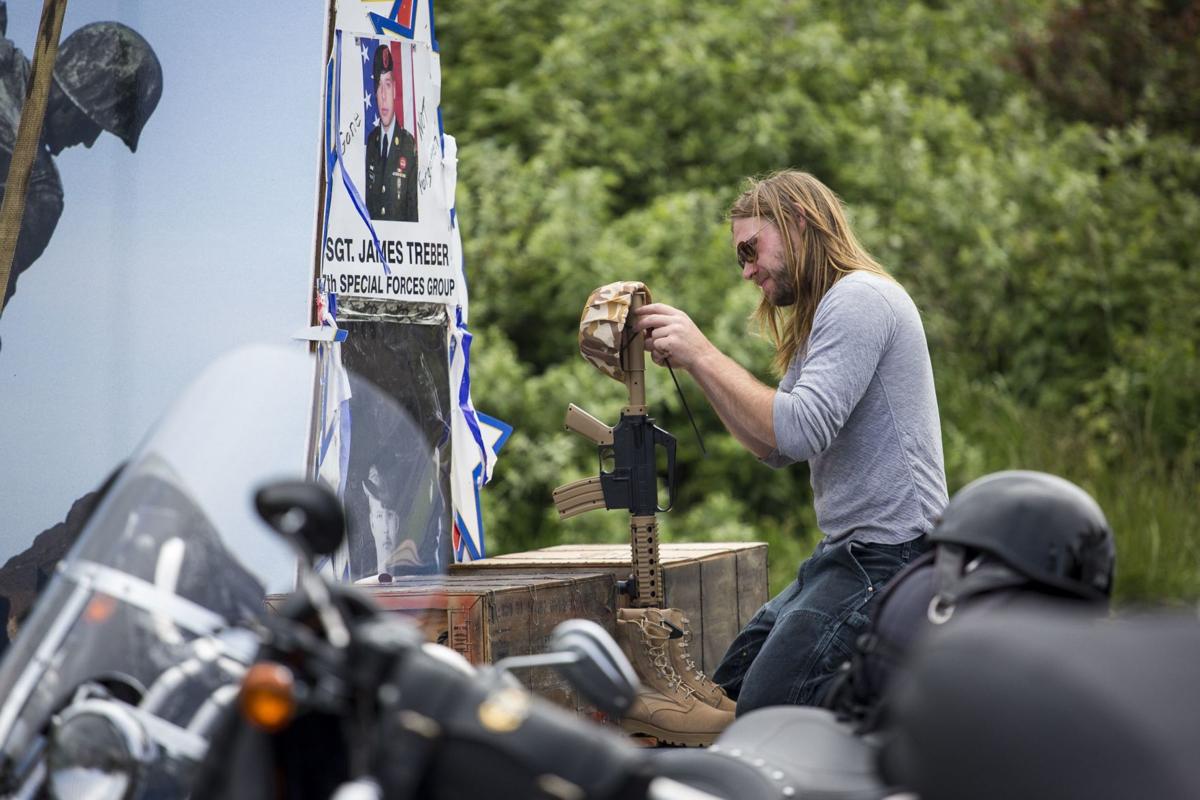 Will Batty, a volunteer with American Legion Riders, puts the finishing touches on a battlefield cross as a tribute to Sgt. James Treber during the Memorial Day ceremony at the American Legion in Seaside. 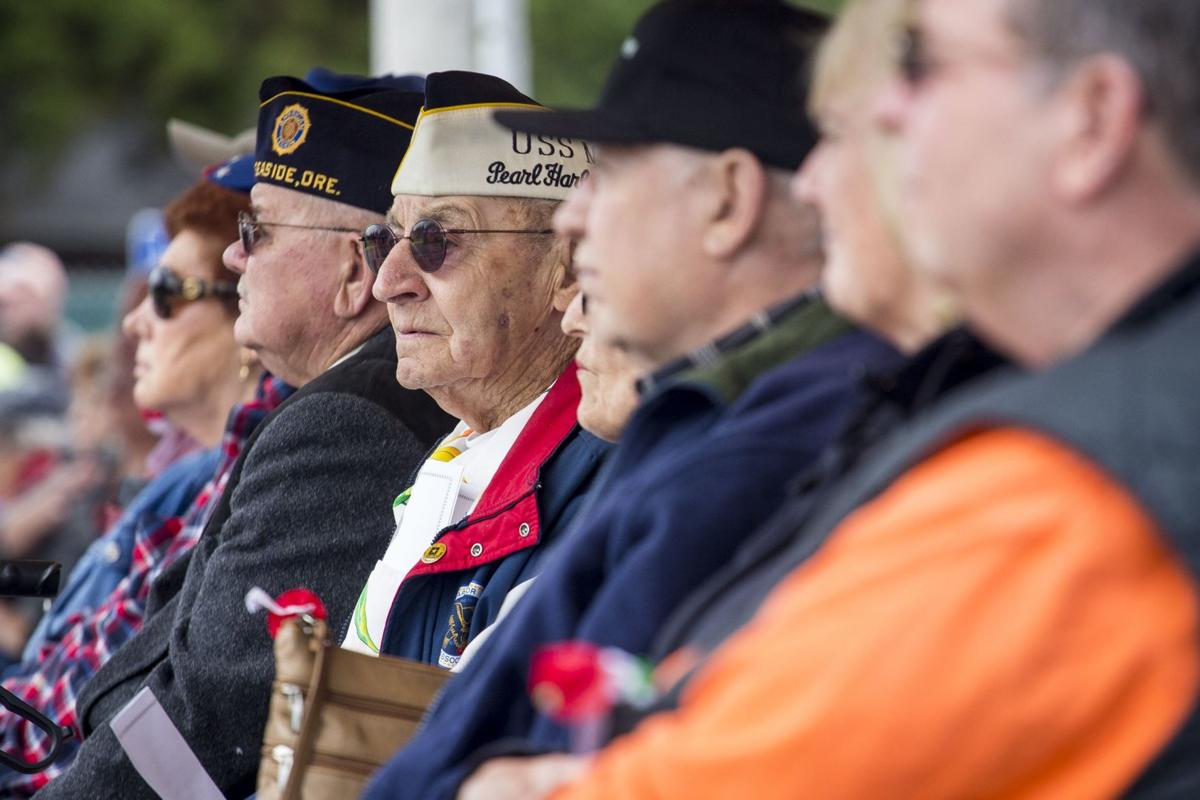 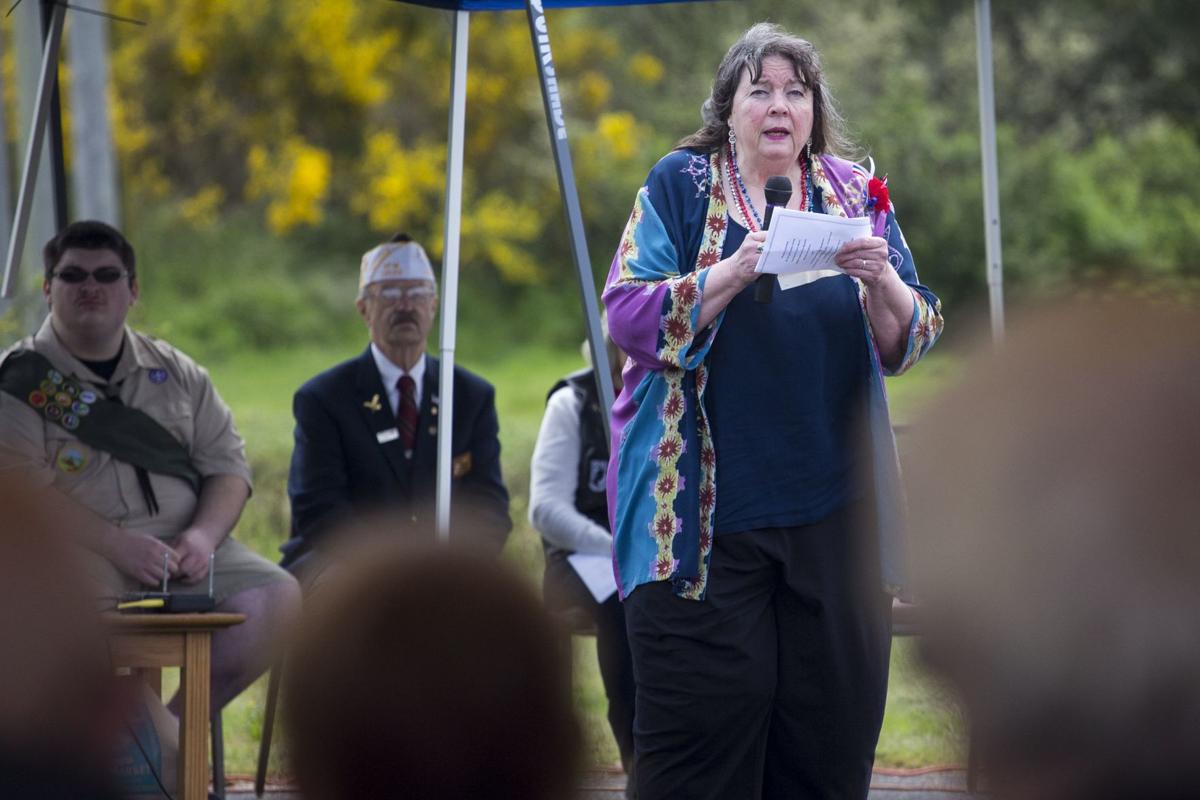 Maureen Boggs sings “Amazing Grace” during the Memorial Day ceremony at the American Legion in Seaside. 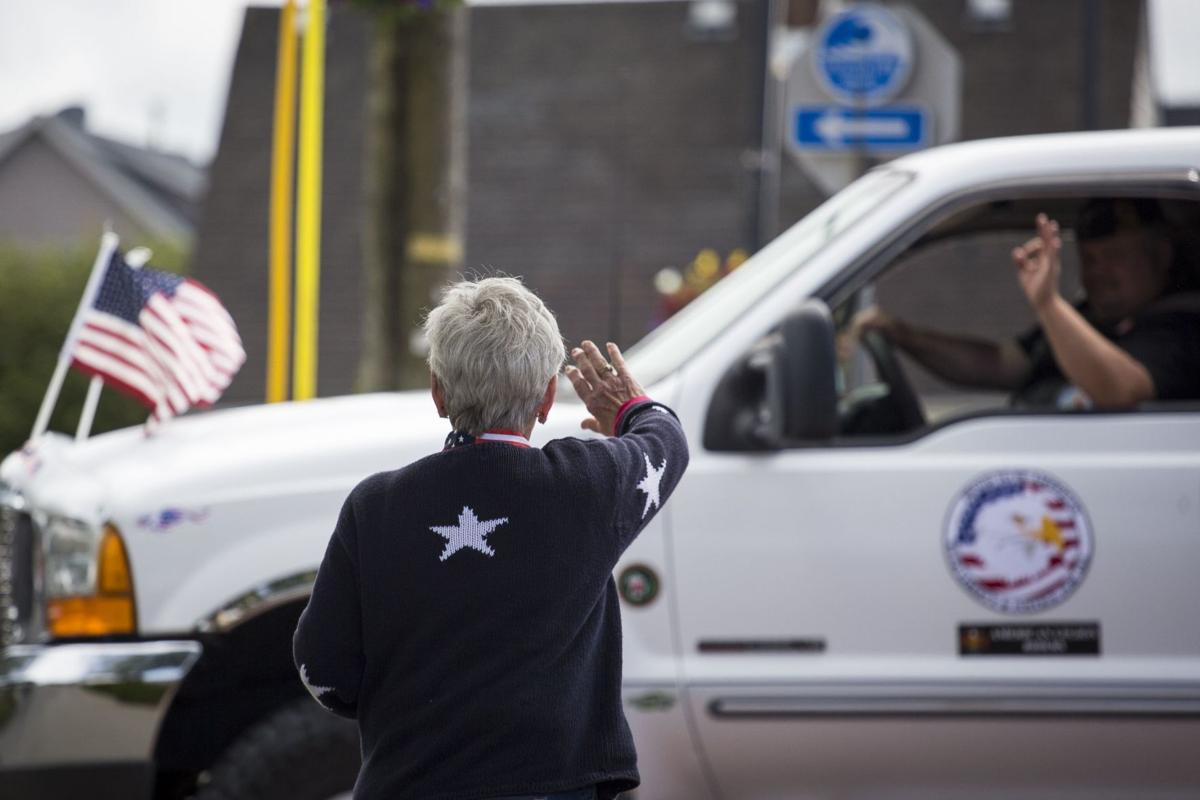 A woman waves to Jay Pitman, sergeant-at-arms at American Legion Riders Chapter 99, as Pitman drives through Seaside as part of a Memorial Day motorcade.

Duane Heller and Jeannette Klefstad toss a wreath into Neawanna Creek during the Memorial Day ceremony at the American Legion in Seaside. At the ceremony they honored Gary Heller who served in the National Guard for eight years from 1961-1969.

Will Batty, a volunteer with American Legion Riders, puts the finishing touches on a battlefield cross as a tribute to Sgt. James Treber during the Memorial Day ceremony at the American Legion in Seaside.

Maureen Boggs sings “Amazing Grace” during the Memorial Day ceremony at the American Legion in Seaside.

A woman waves to Jay Pitman, sergeant-at-arms at American Legion Riders Chapter 99, as Pitman drives through Seaside as part of a Memorial Day motorcade.

SEASIDE — For the late Gary Lee Heller, Memorial Day should be about patriotism and honor, according to his siblings.

At the Memorial Day ceremony Monday, his brother Duane Heller, sister Jeannette Klefstad and lifetime friend Jon Marsh were escorted by 2nd Vice Commander Chuck Godwin to the bridge arcing over the Neawanna Creek to lay a commemorative wreath in the water below in memory ofhis life.

The Heller siblings were raised and schooled in Seaside and Gary Heller, the youngest brother, moved back to the area from Los Angeles 15 years ago. Duane Heller lives in Seaside, but Klefstad and Marsh were visiting from out of town for the occasion, which “was a great honor,” Duane Heller said.

“What more can I say?” he added. “They’re honoring our brother.”

Klefstad agreed, adding the timing was coincidentally appropriate as Tuesday, would have been Gary Heller’s birthday.

The American Legion’s ceremony was attended by more than 70 people, the largest crowd Commander Lou Neubecker said he could remember. When the chairs under two awnings filled up, more chairs were pulled from the nearby American Legion building and other attendees spilled across the parking lot to honor the nation’s fallen soldiers.

Memorial Day, Neubecker said, is a time to celebrate the lives of America’s deceased veterans, but “it’s also a very sad day of remembrance.”

“Please don’t wish me a ‘happy Memorial Day,’” he said.

Seaside Elks’ Exalted Ruler Jerry Lounsbury gave a short history of Memorial Day, which was sparked in the mid-1860s in Waterloo, N.Y. — and possibly other locations — when volunteers would place flowers on the gravesites of deceased veterans. Originally, he said, it was called “Decoration Day,” and on May 30, 1868, three years after the end of the Civil War, the first national ceremony was held at Arlington National Cemetery near Washington, D.C. In 1971, the U.S. government made Memorial Day a federal holiday, to be observed on the last Monday in May.

In Lounsbury’s opinion, making it a national holiday, and subsequently part of a three-day weekend, is “when some of the true meaning of Memorial Day was lost.”

The holiday is about more than a chance for a miniature vacation, Lounsbury said.

Mitch Miller, of Oregon’s Veterans of Foreign Wars department, also paid tribute to “our American fallen,” who “humble Americans have gathered” to honor since the Civil War.

“Every American owes a great debt to the courageous men and women who have selflessly given their all to defend and protect our way of life,” he said. “And while giving back to the extent they deserve is impossible, celebrating their memory and honoring their most selfless deeds offers a start.”

He thanked the approximately 1.3 million members of the nation’s military who have fought to defend American values and the daily freedoms citizens enjoy.

“God bless our fallen, their families and those that live in uniforms in this world,” said Miller, himself a Vietnam War veteran who served several years in the 1960s.

In Vietnam, he said, he saw many good service members fall, memories that still touch him.

Guest speaker Luke Thomas, the Clatsop County Veterans’ service officer, said he’s committed to helping veterans get the services and benefits they deserve. He told the veterans in the audience to call him, even when they might believe another veteran needs his help more.

“You’re a veteran, you’ve paid your due,” he said, adding the fallen soldiers who were being memorialized would want the living veterans to now receive what they deserve.

Maureen Boggs, a member of the Seaside American Legion Auxiliary, sang “The Star-Spangled Banner,” “Amazing Grace” and “America, the Beautiful” for the ceremony. A member of Boy Scout Troop 642 led the crowd in the Pledge of Allegiance.

Kyrstin Crawford, a member of the legion’s Junior Auxiliary, served as Miss Poppy and handed out red remembrance poppies, made by veterans, at the ceremony for donations. The Junior Auxiliary members also passed them out in front of grocery stores and in other locations, and the donations go to veterans, Crawford said.

After leading the crowd in the closing prayer, Chaplain Jere Mattila read “Flanders Field,” a poem written by John McCrae in May 1915 during World War I. The poem, which is the inspiration behind the traditional remembrance poppies, reads:

In Flanders fields the poppies blow,

Between the crosses, row on row,

That mark our place;

And in the sky the larks, still bravely singing,

Fly scarce heard amid the guns below.

We are the dead.

And now we lie in Flanders field,

Take up our quarrel with the foe

To you from failing hands we throw the torch

Be yours to hold it high.

If you break faith with us who die we shall not sleep,

Though poppies grow in Flanders fields.