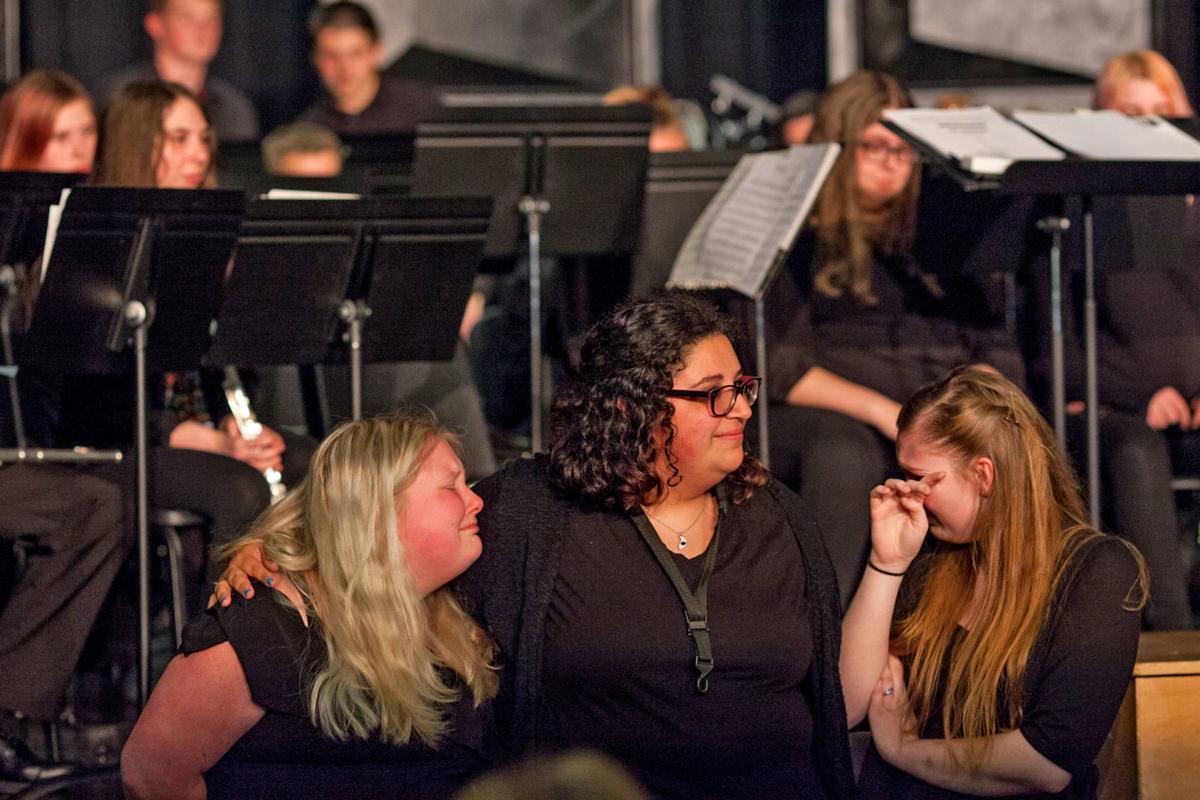 Ilwaco concert band seniors Allyson Wagner, Isabel Aguilar and Madelyn Skillings tried to hold back emotions while being honored for their four years in the band by music director Rachel Lake during their final concert of the year on June 4. 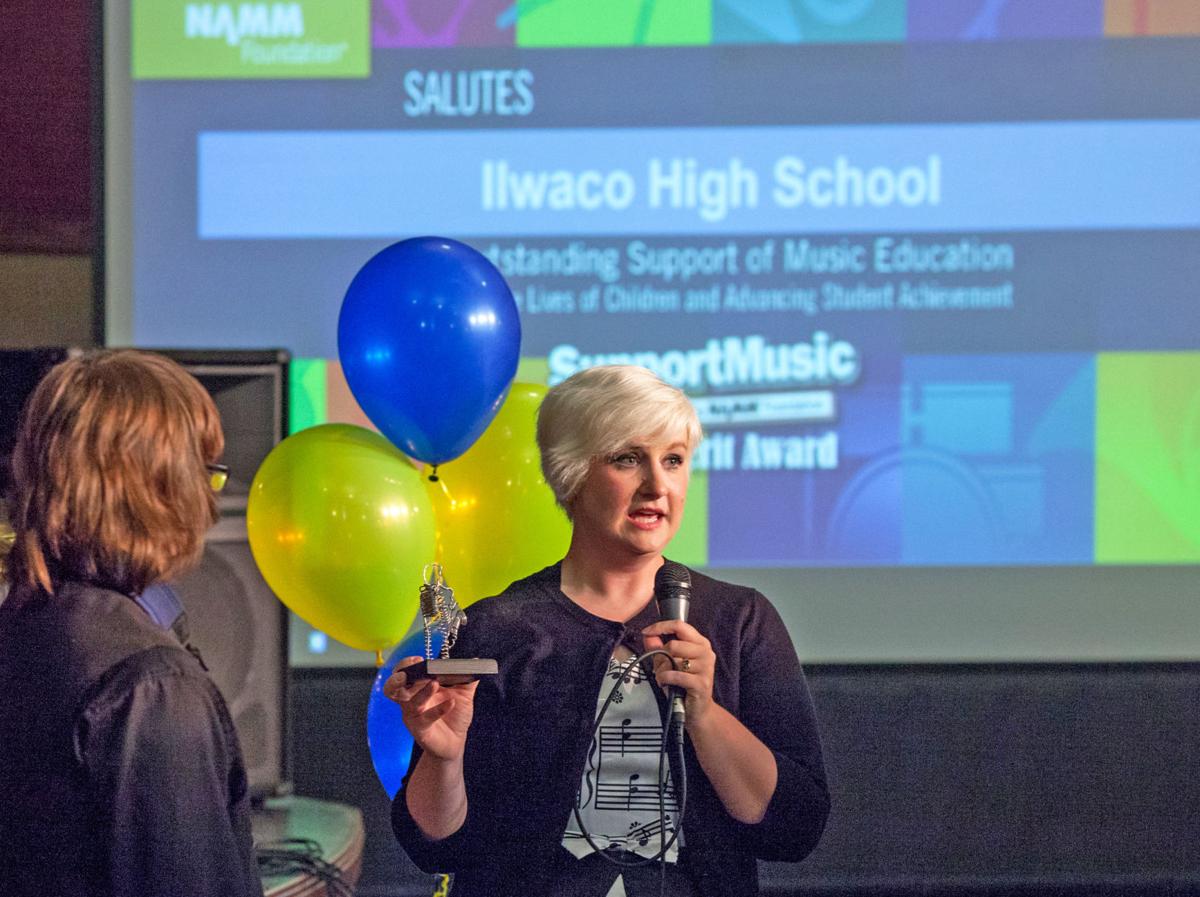 Ilwaco High School music director Rachel Lake presented senior Devin Cavness with a statue to honor his time with the IHS jazz band during the final band concert of the school year. 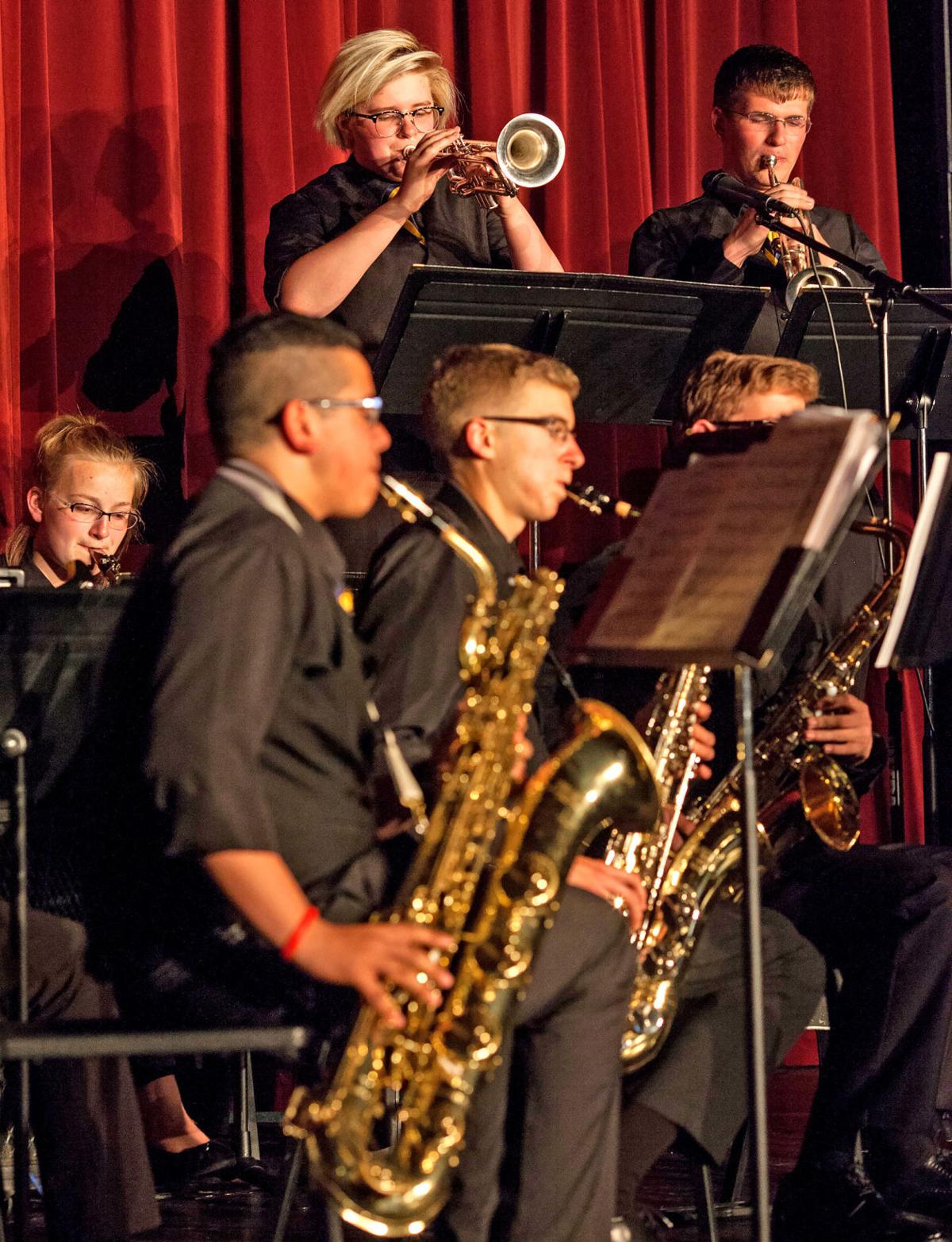 The Ilwaco High School jazz band performed at their year-end concert on June 4 in the Hilltop Auditorium.

Ilwaco concert band seniors Allyson Wagner, Isabel Aguilar and Madelyn Skillings tried to hold back emotions while being honored for their four years in the band by music director Rachel Lake during their final concert of the year on June 4.

Ilwaco High School music director Rachel Lake presented senior Devin Cavness with a statue to honor his time with the IHS jazz band during the final band concert of the school year.

The Ilwaco High School jazz band performed at their year-end concert on June 4 in the Hilltop Auditorium.

ILWACO, Wash. — Music can be an excellent distraction sometimes, especially when you’re feeling sad or wistful for another time. Such was the case at last week’s final Ilwaco High School band concert, which not only allowed both the symphonic and jazz bands to perform, but also for music director Rachel Lake to honor her graduating seniors one last time.

The symphonic band began their set with “Jai Ho” by AR Rahman, from “Slumdog Millionaire,” followed by one of John Phillip Souza’s most well-known works, “Liberty Bell March.”

The band was then off to the high seas for “March to the Scaffold,” which Lake said she pulled from her files because she “wanted something different.”

“You’ll hear minor keys, major keys, some Italian roots, some French roots — and then you’ll hear a pirate,” she said while introducing it.

Lake described the song “This is Me” from the recent musical film “The Greatest Showman” as dear to her heart because it symbolizes the values she tries to instill in her students.

“The value that I put into each and every one of these students is to make sure that they be the best person they can be,” she said.

Lake took time to recognize the members of a sextet from the symphonic band who competed at a Washington Interscholastic Activities Association state-level competition.

“First time in Ilwaco history. This is the first year an instrumentalist — let alone a group of instrumentalists — has had the opportunity and earned the right to go to our state competition and compete against much larger schools,” she said.

After calling them forward — Bella Brownlee, Devin Cavness, Catherine Johnson, Emma Lake, Marquee Maragos and Nallelly Valenzuela — Lake gave each a patch that could be put on their letterman jackets denoting the accomplishment.

The symphonic band’s nine seniors were honored by Lake for their years in the music program at IHS. Lake had small statuettes made for each senior in both bands that depict them playing their instrument. Maddy Chabot’s figure featured her “faux hawk” hairstyle. Lake also took the time to relate a story or two about each senior before handing them their statue, causing more than a few of them — including Lake — to tear up.

“This is the first group where almost every senior has been with me for six years,” Lake said, noting how she had most of them in middle school as well. “It’s unbelievable.”

The band closed the set with their take on the theme from the film “The Avengers” by Alan Silvestri.

The IHS jazz band opened with a pair of Latin jazz numbers — “Miss Mango” and “Soul Sauce” — separated by their saxophone feature, “Groove Merchant.” The band has excelled with the upbeat Latin songs this year. “Miss Mango” featured Jose Mendez-Hernandez playing the güiro, a Latin American percussion instrument played with a stick. Meanwhile, Carper managed to play his trumpet and the shaker at the same time.

“We’ve been working really hard this year at getting better at our craft,” said Lake, before pointing out that their performance of “Miss Mango” at the Bellevue Jazz Festival — a competition usually reserved for large schools — earned the band second place. “We’re a tiny school doing large things.”

“Soul Sauce,” written by Dizzy Gillespie, featured a call-and-response portion led by senior Emeri Wilson on trumpet, with the other horns trying to repeat her phrases.

Mendez-Hernandez was given the spotlight during “Blues Bari Pie,” as he led and soloed on his baritone sax for much of the song, only breaking to give bassist McKenzie Mulinix an extended solo. Mulinix also received recognition from Lake earlier in the set for receiving the outstanding soloist award from the Bellevue Jazz Festival.

Just like during the concert band portion, the jazz band seniors were also honored with statuettes and remembrances from Lake. She noted the class meets during “zero” period, at 7 a.m., an hour before school starts.

The group of four seniors included Maddy Chabot, Wilson, Carper and Cavness. Lake noted that she would try not to get as emotional as she did with the concert band, since the jazz band still had gigs to play this year, including June 17 at the Garlic Festival in Ocean Park.

“These seniors and I have been through a lot,” Lake said. “We got stuck in an elevator for, like, 45 minutes. These kids have grown musically and they’ve matured. You can never replace anyone in a group where there’s only 14 of us. So it’s very difficult to find anyone to fill their shoes.”

Lake said a few words about each senior before presenting their statue.

“Devin, I really appreciate all the music you’ve played.”

“Emeri, your stories, I will miss them so much. You’ve shared all these things with me and I’ll remember them.”

“The number one comment I got about Noah this year was, ‘He can play two instruments at once?’ because he plays shaker while he plays trumpet. You’re going to go down in history for playing the shaker — in perfect time — while playing the trumpet, which is really hard to do!”

“Maddy played the oboe when we first met in middle school, and your playing got really good. But then you decided you didn’t want to do oboe anymore. Alto saxophone is her gift.”

The band finished on a high note, ending their set with anther uptempo number, Gordan Goodwin’s “Backrow Politics,” featuring the trumpet section, which, Lake noted, “is the best it has ever sounded.”