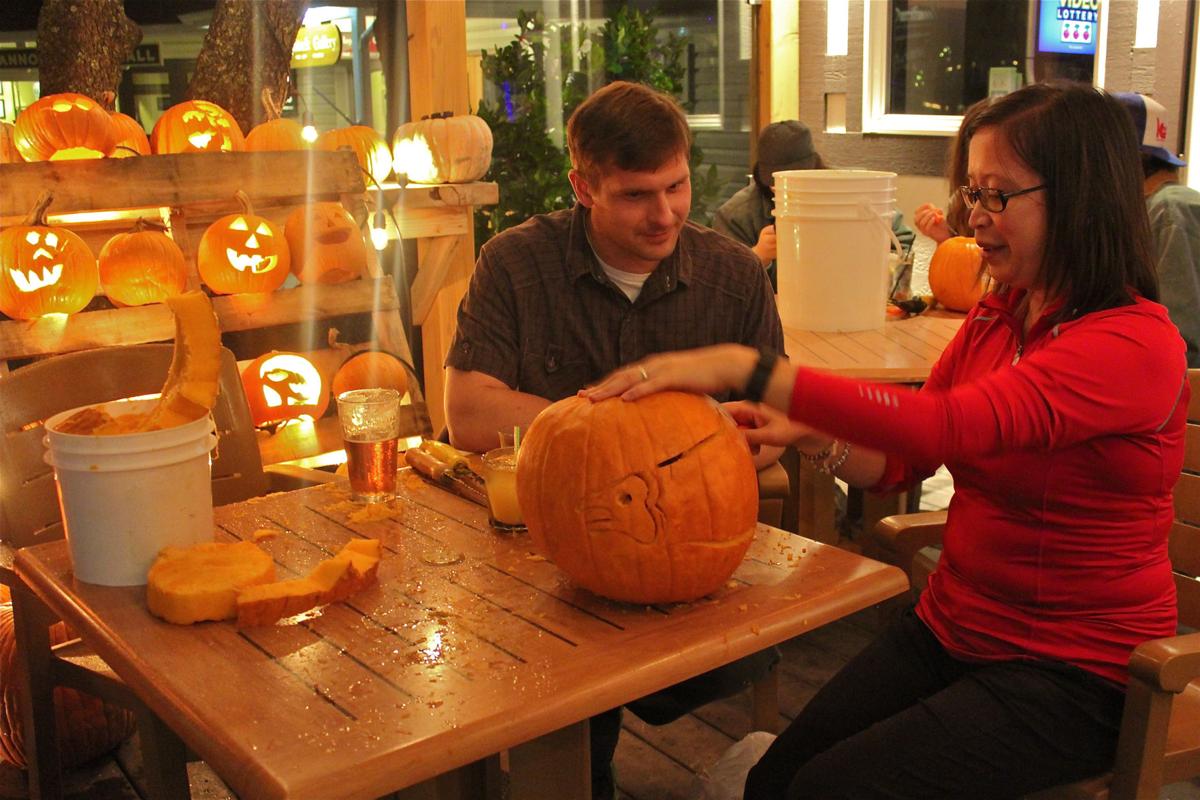 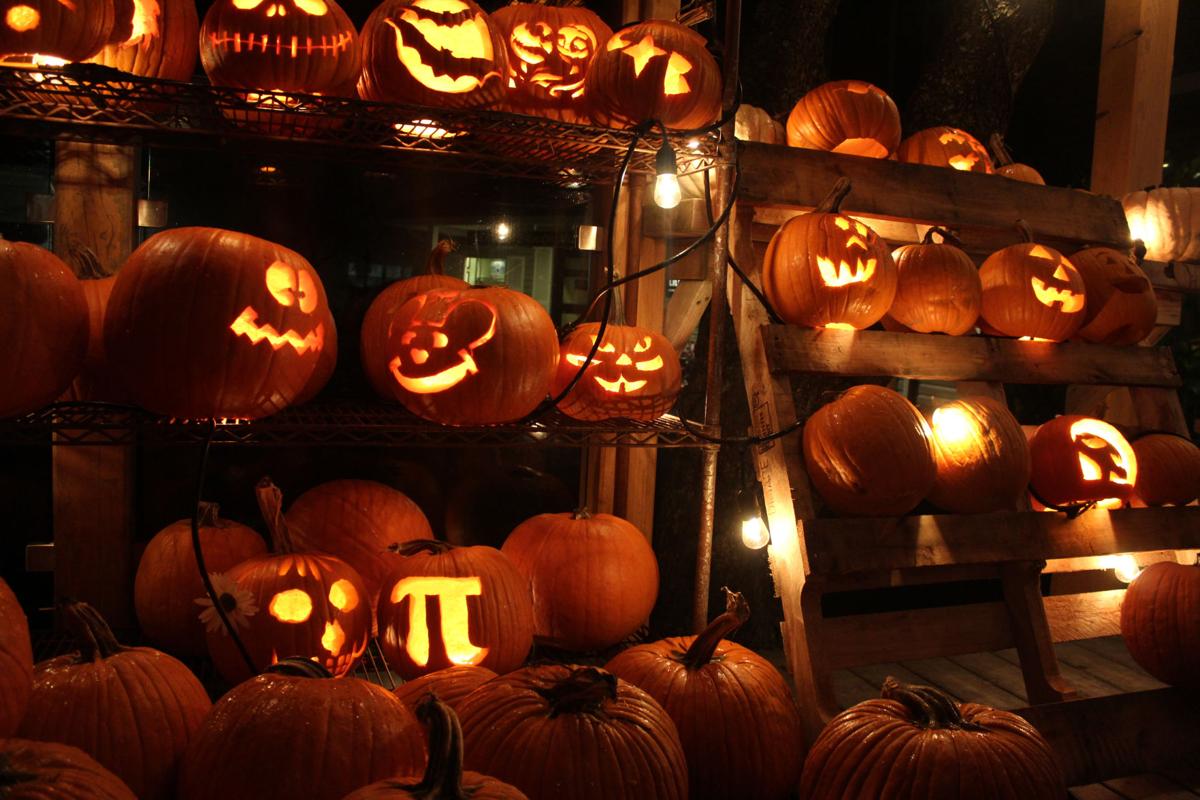 Pumpkins take center-stage at Driftwood Restaurant & Lounge in Cannon Beach during the restaurant's weeklong pumpkin-carving contest, open to all patrons 21 and older. 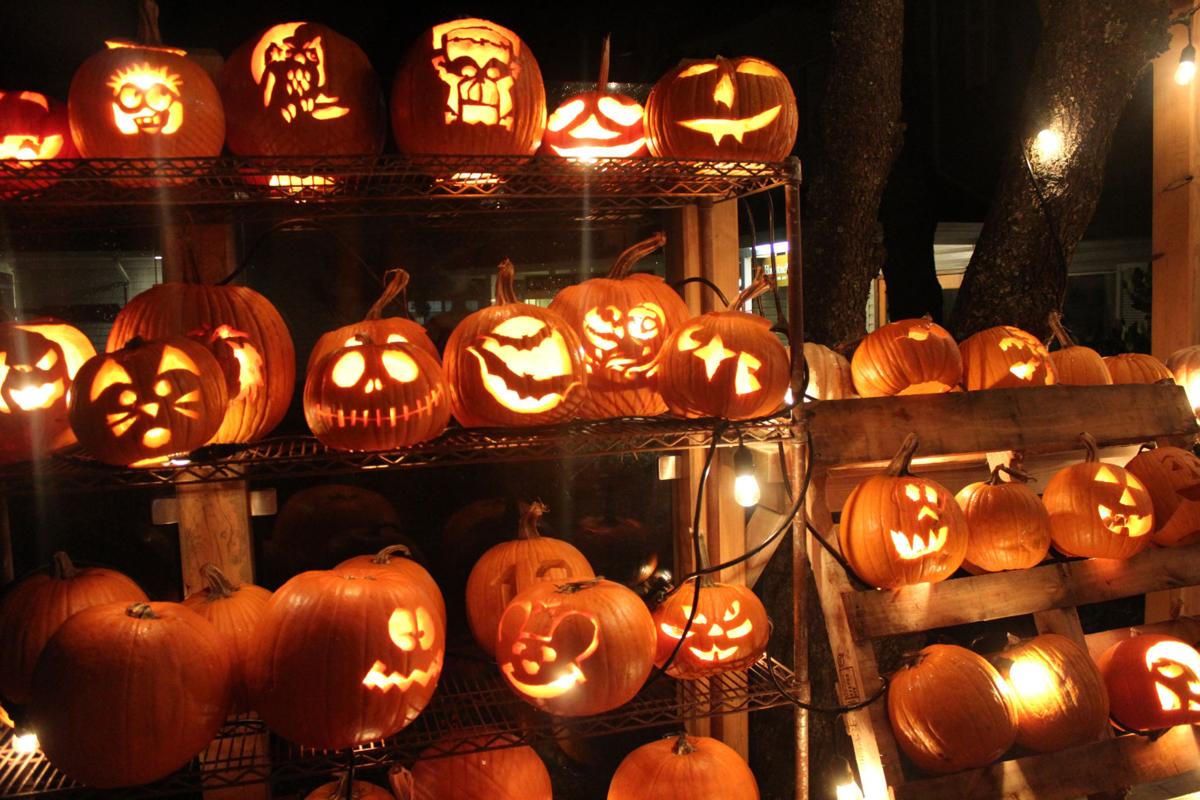 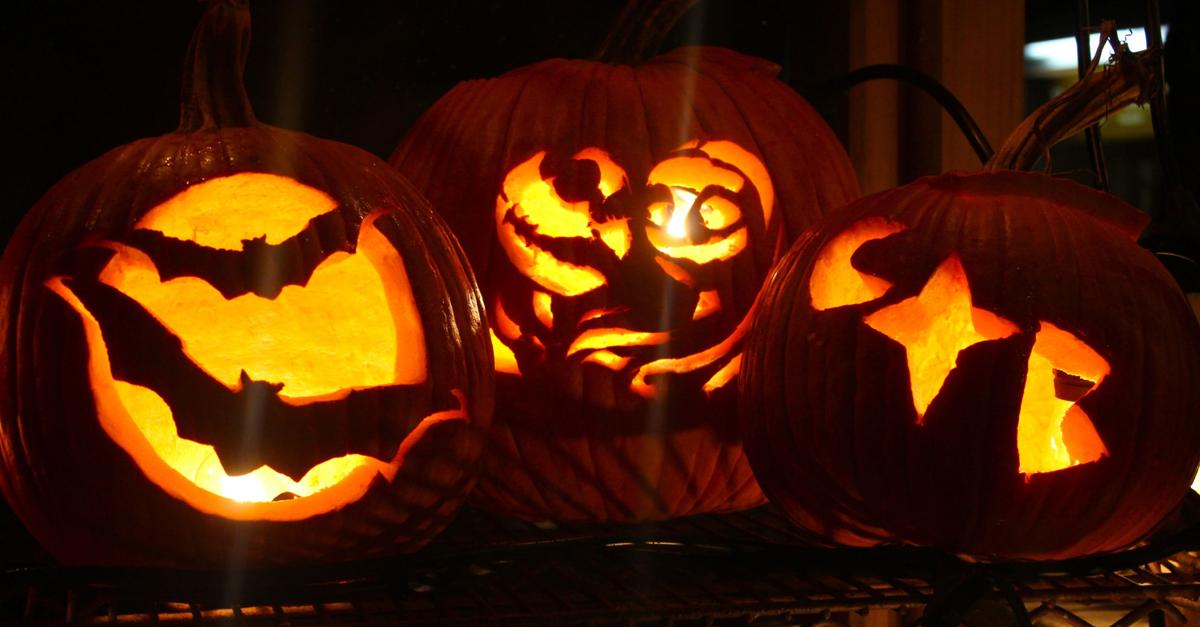 The annual event has grown to more than 100 entries. 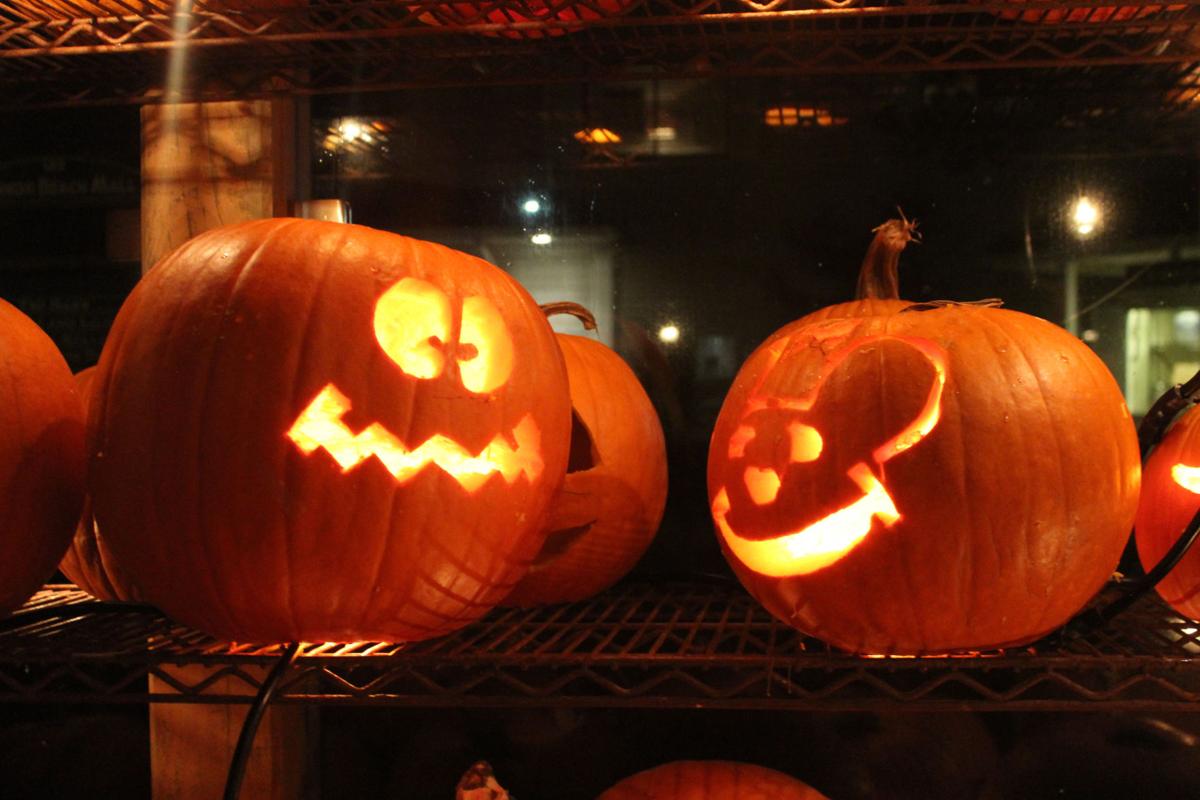 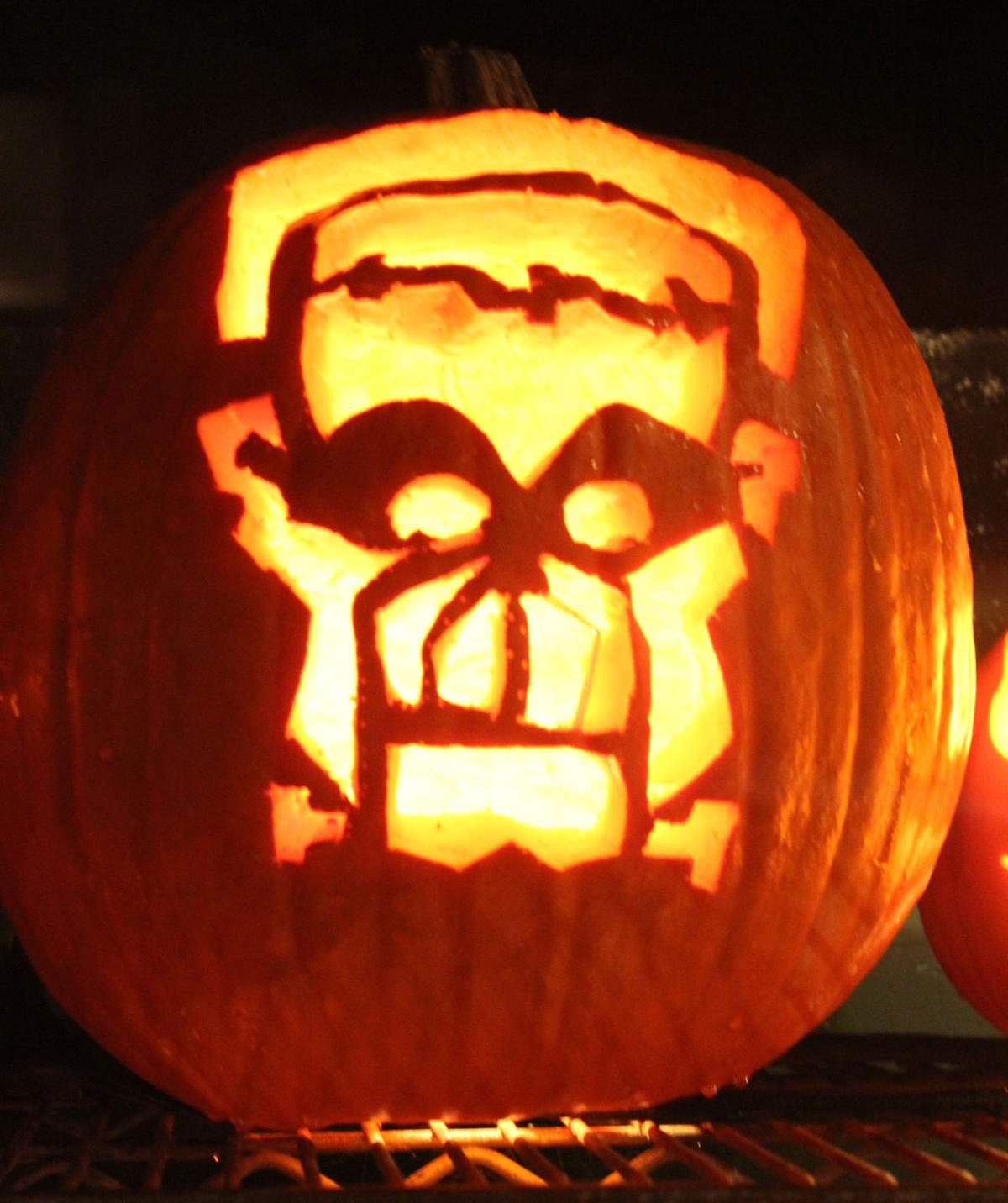 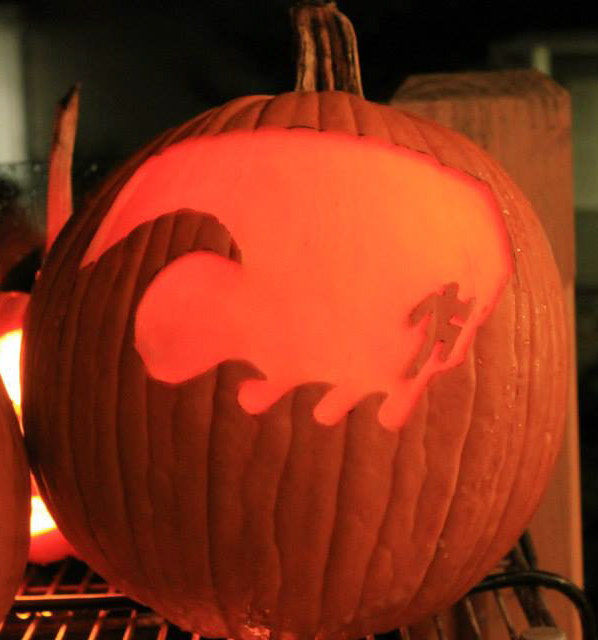 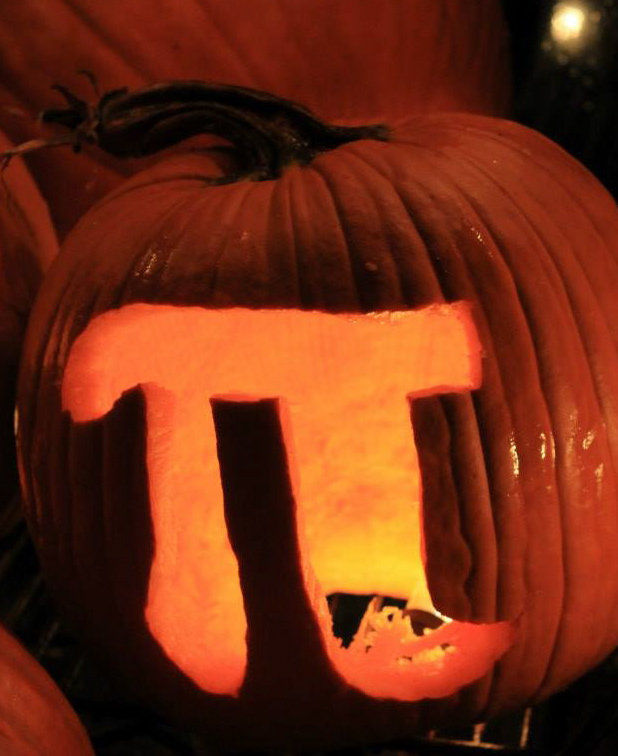 Pumpkins take center-stage at Driftwood Restaurant & Lounge in Cannon Beach during the restaurant's weeklong pumpkin-carving contest, open to all patrons 21 and older.

The annual event has grown to more than 100 entries.

CANNON BEACH — Knife-wielding customers — often hopped-up on pub fare and libations — slowly transform an enormous mound of pumpkins on the deck at Driftwood Restaurant & Lounge into a shining artistic display, with entries ranging from sweet and simple to slightly terrifying.

There are no rules when it comes to Driftwood’s annual weeklong pumpkin-carving contest, which started last Friday and goes through today. Since the carving takes place on the deck, which is exclusively for patrons 21 and older, the contest is, by default, adults only.

Other than that, the restaurant supplies pumpkins and tools and lets patrons’ imaginations run wild. Seeing what comes out the other side is one of manger Kyle Genin’s favorite aspects of the contest.

The Driftwood is a local hangout, so staff and management often see familiar customers. However, the pumpkin-carving contest lets them experience a different side of those regulars, Genin said.

“You get to see their talents come through,” he said. “It’s just fun to see what the locals can do.”

Paul and Susie Nofield, who both are very active in the community, started the tradition of pumpkin-carving at the restaurant many years ago, originally as a fun, non-competitive activity to celebrate the fall season.

“The Driftwood is good about doing a lot of local functions,” Genin said.

Three years ago, the activity transformed into a contest.

Some people anticipate the contest each year, bring their own supplies and spend hours on their creations using stencils and painstakingly drawn-out designs. Other people happen upon the event by chance.

Thomas and Vanessa Phillips, of Tacoma, Washington, said they were out for a drink during their Cannon Beach getaway and decided to participate.

Vanessa Phillips carved the Driftwood logo — a salmon — and restaurant name into her pumpkin, accomplishing a striking resemblance. Thomas Phillips graciously tried resurrecting the pumpkin that was used in her first attempt (she started over when she didn’t like how the fish was turning out). He added numbers, eyes, symbols and other embellishments to create a pumpkin that was, as he described it, a “Charles Manson reference.”

Stephanie Crespin and Grant Garrett, of Huntington Beach, California, took a different approach. While waiting for their table, they said, they sat on the beach, searched online for ideas and then drew mockups on napkins.

Crespin carved an image of Minnie Mouse, because she loves Disneyland, she said. Garrett’s was the product of an Internet search result when “we Googled ‘pumpkin carving easy,’” Crespin joked.

Garrett said he hasn’t carved a pumpkin since he was 7. Crespin carves one every year for Halloween, but because of travel, she did not expect to have an opportunity this year.

“This was a good surprise,” she said.

They also did not visit Driftwood specifically for the pumpkin-carving and saw the contest advertised on a sign only when they got there.

“We came here by referral,” Garrett said, adding they were told Driftwood is a “local favorite.”

The activity is just one aspect that lends to Cannon Beach’s charm and gives the town “a good feel,” Grant said.

“It’s what mainstream America is missing these days,” he said of Cannon Beach.

When the contest first started, patrons carved about 20 pumpkins. Last year, the total increased to about 90. This year, the restaurant had more than 100 pumpkins ready to go.

The contest was shortened to one week instead of two this year, because the pumpkins start seriously decaying after that, Genin said. The staff wanted to avoid having to rinse the pumpkins in bleach water to extend their longevity, which was a time-consuming but necessary task last year, he said.

Despite the consistent clean up required, Genin said he and other staff members feel scrubbing sticky pumpkin residue off the deck, tables and chairs is worth the way in which the contest brings people to the Driftwood to socialize. It’s not uncommon to find people conversing, sharing equipment and enjoying a drink while carving.

The mixture of alcohol into the activity sometimes leads to interesting creations, but only one person has suffered an injury so far. Luckily, it was just a mild laceration on their finger, Genin said.

Everyone who participates in the contest gets a T-shirt. On the final day of the contest, the restaurant’s owners and management select first-, second- and third-place winners, who get $100, $75 and $50 gift cards, respectively.

Genin said he takes pictures of each entry and puts them online. He is thinking about next year adding a winner for the person whose entry receives the most “likes” on Facebook.

Whether it is the free T-shirt or a desire to relive childhood memories that drives participation, the contest is “just a great community event,” Genin said. Additionally, it keeps visitors coming back to town at a time of year when tourism usually begins slowing down.

For some people, “it turns into an annual trip to Cannon Beach to carve pumpkins,” Genin said. “What a great memory that’s going to be lodged into their brain.”