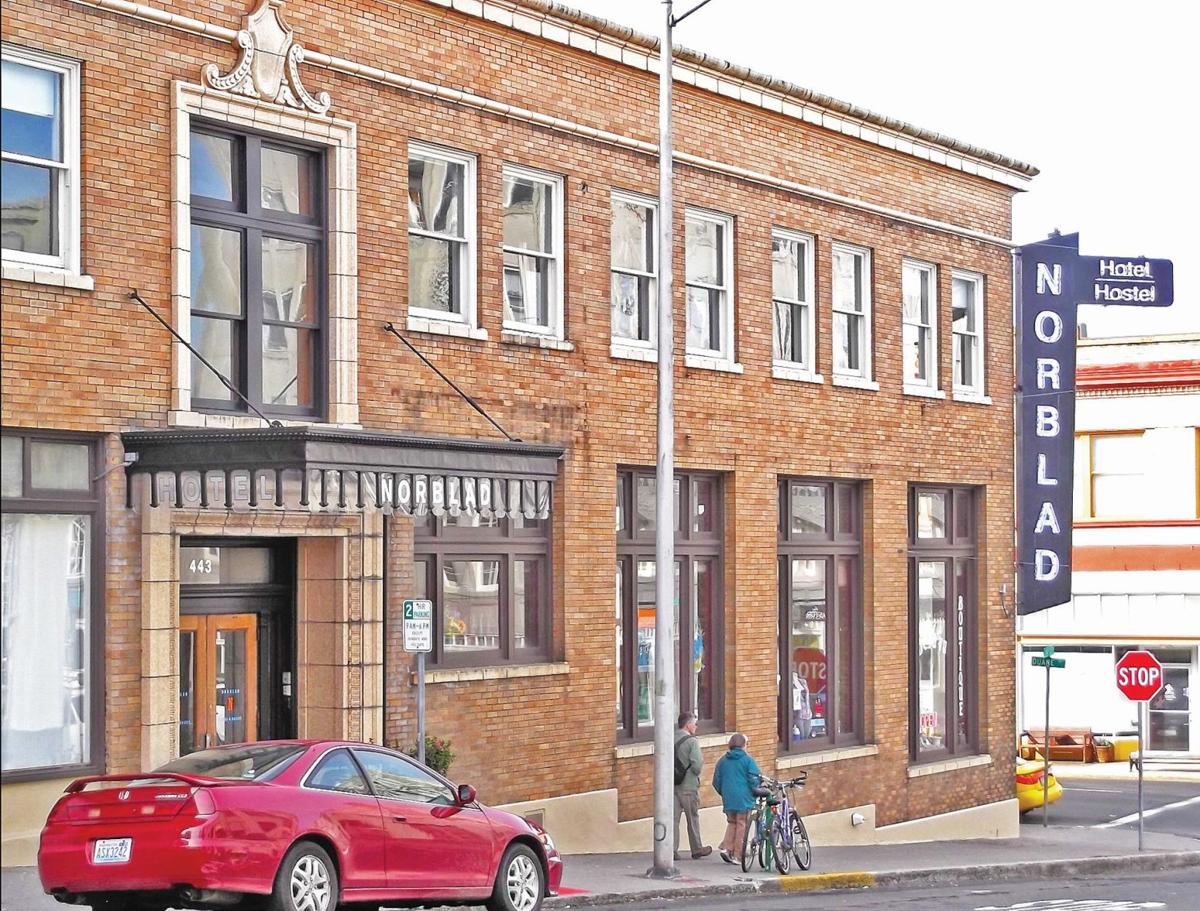 The Norblad Hotel stands at the base of 14th Street's hill on the east end of downtown Astoria. 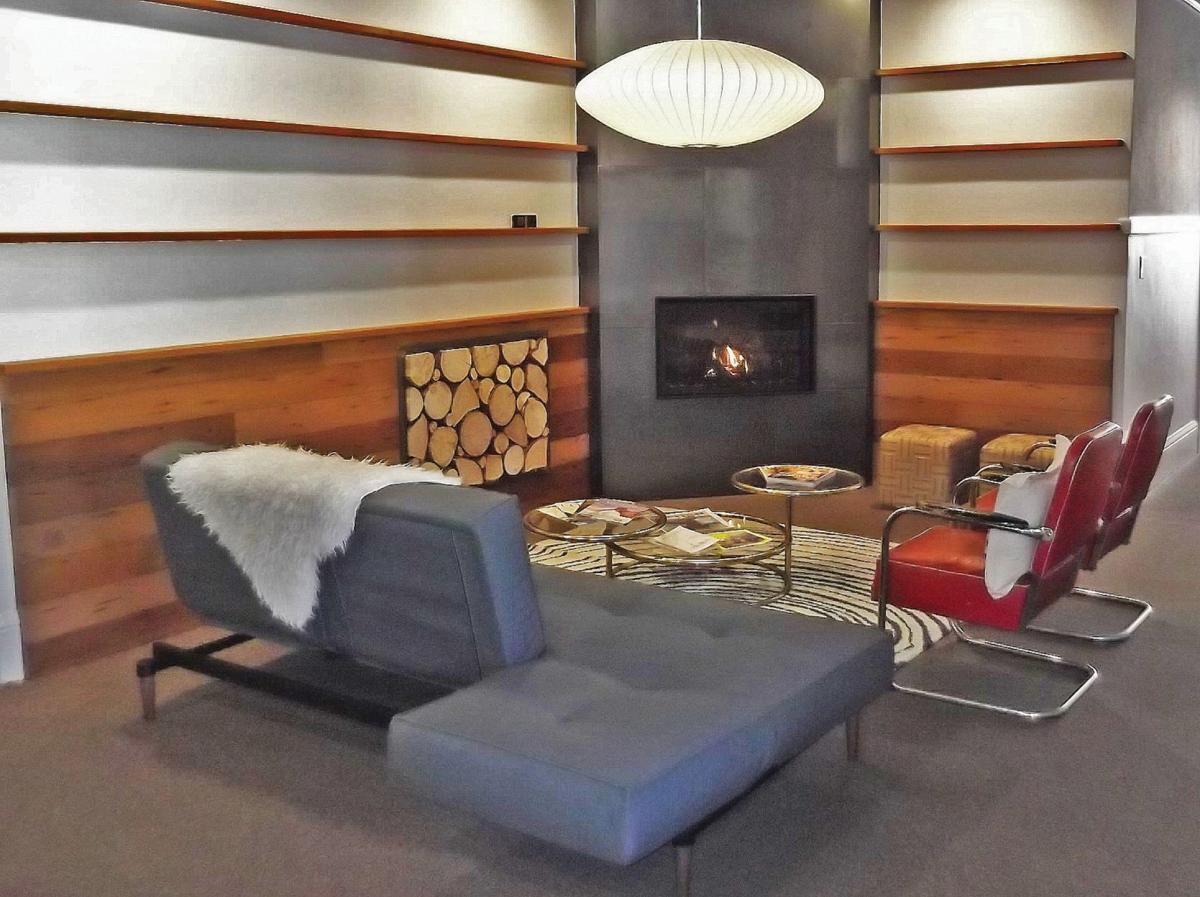 The centrally located lobby is nearly complete. Paul Caruana's retro design will include objects of interest on the bookshelves. 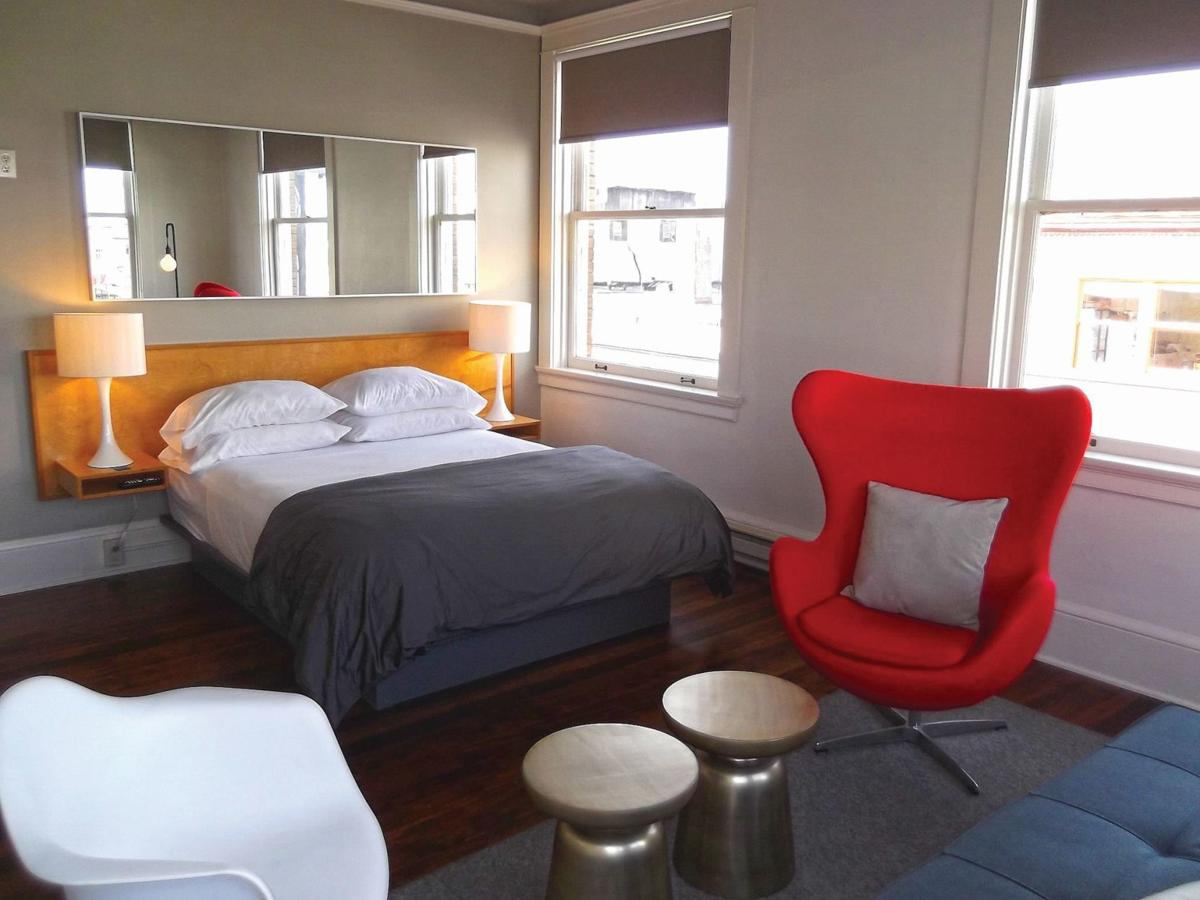 Lightly furnished, airy rooms allow the building to speak for itself. 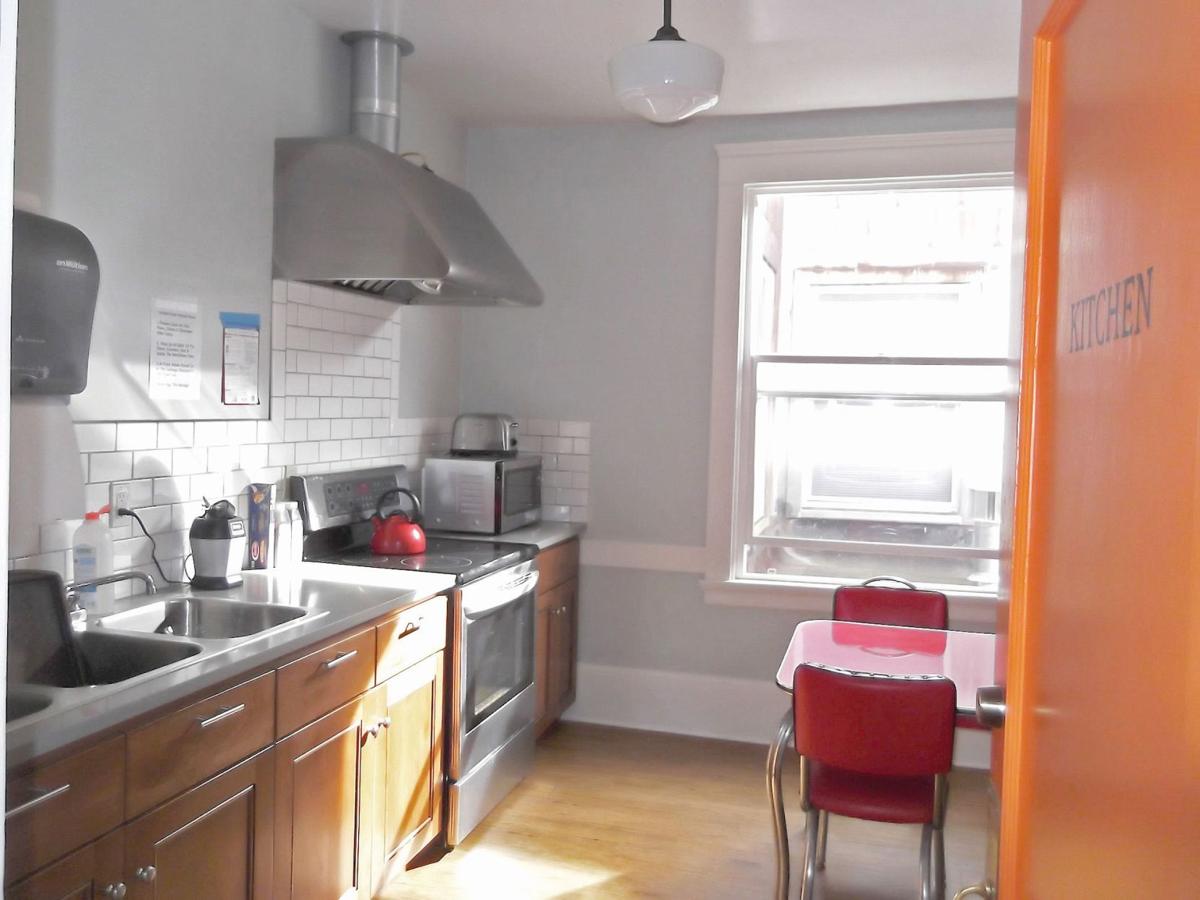 Tenants from 16 apartments share a kitchen adjacent to an inner lightwell. 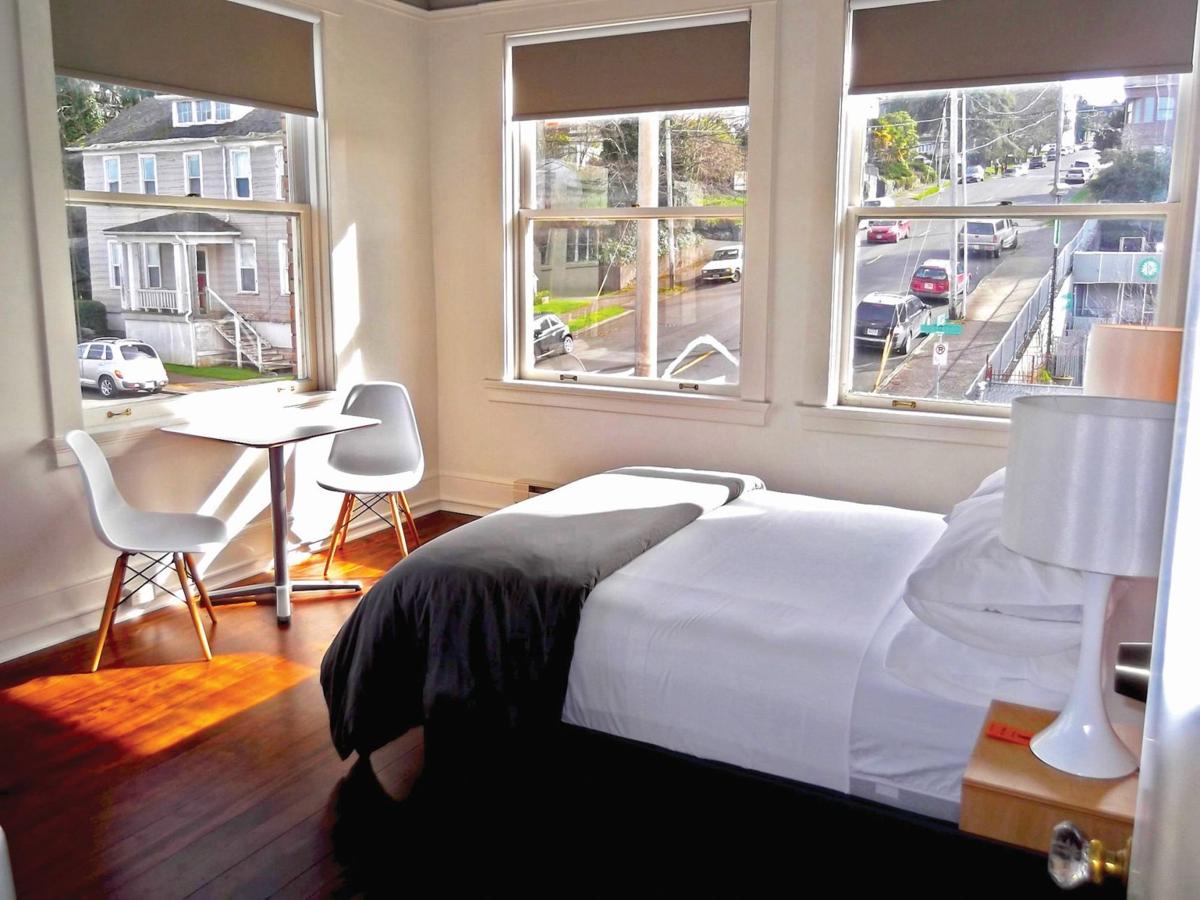 The spare rooms encourage guests to be active and explore Astoria.

The Norblad Hotel stands at the base of 14th Street's hill on the east end of downtown Astoria.

The centrally located lobby is nearly complete. Paul Caruana's retro design will include objects of interest on the bookshelves.

Lightly furnished, airy rooms allow the building to speak for itself.

Tenants from 16 apartments share a kitchen adjacent to an inner lightwell.

The spare rooms encourage guests to be active and explore Astoria.

Their intent was to reinvigorate downtown’s east end through high-quality restoration and a top-notch tenant base.

The Norblad Hotel, notorious for its leaking roof and sometimes sketchy clientele, was also available. “I didn’t want anything to do with it,” recalled Caruana. “It looked like so much work … the tenant base … the police were there all the time. It needed everything.” Faherty, he claimed, talked him into purchasing the building.

George F. Norblad operated a 36-room hotel from the second story of the John E. Wicks designed structure. Housed within the Miller-Jeffers Building, the Norblad Hotel opened in January 1923.

Norblad was a Portland businessman with local ties. His brother, Albin W. Norblad, was a longtime Astorian who served as Oregon’s governor from 1929 to 1931.

The first order of business was to create curb appeal. All the window sashes were repainted. Then, the entry’s original galvanized metal and glass canopy was reconstructed by Seaside’s Coast Repair and Maintenance.

Cauruana said working on the interior was initially more damage control than having a grand image or plan. Every room was renovated and stripped to a “white box.”

“I just stepped back and let Paul design,” recalled Faherty. “Paul has a gift for it and the Norblad features some of his best work.”

Wicks’ design was allowed to speak for itself. It was used as a foundation for spare room furnishings. Bed boards and side tables are mounted to the wall to promote a feeling of airiness. Wall-mounted mirrors above beds accentuate that sense. Chairs and desks are small and light. The WCs and single occupancy showers are located down the hall.

“We provide people less of what they don’t need,” said Caruana. “And, we added high-quality pieces, such as high-quality mattresses, back into the rooms.” Coffee and other services are provided in the lobby. The result is a “community atmosphere” where guests interact with each other. Furthermore, the rooms are not furnished for those who want to set up a get-away office.

“It is designed for the active guest,” asserts Caruana. “The incentive is to go out and see the town.”

The Norblad has 15 hotel rooms and 16 apartments. It’s location and sensibility appeals to both guests and residents.

“There is something magical about staying in downtown,” contends Caruana. “All the things of a big city — restaurants, the Liberty Theater and shopping — are all three blocks from the Norblad.”

Most of the Norblad’s restoration was completed by employees of Caruana Inc. For instance, JoAnne Patterson, Caruana’s mother, painted the interior. J & J Hardwood refinished the floors; Brian Olson laid tile within the showers; and Diamond Heating installed the new fireplace.

Regional contractors included Wolf Wallpapering, LLC of Portland who scanned custom art, then enlarged it as wall coverings; and Morgan’s Fine Finishes, also of Portland, refinished the wood balustrade in the front stairway and restored the historic front desk.

An unapologetic romanticist, Caruana claims historic buildings have a “undeniable feeling” about them.

“There is something about the mystery of grabbing a handrail that has been used for generations by hundreds of people,” he enthused. “Certain properties have that feeling …. Logic and business plans don’t apply any more.”

Nevertheless, he and Faherty made the leap to restore multiple buildings.

“You can’t always put that return of investment on them,” said Caruana of historic structures.

“Peoples’ emotional response to a place is more than can be quantified.”