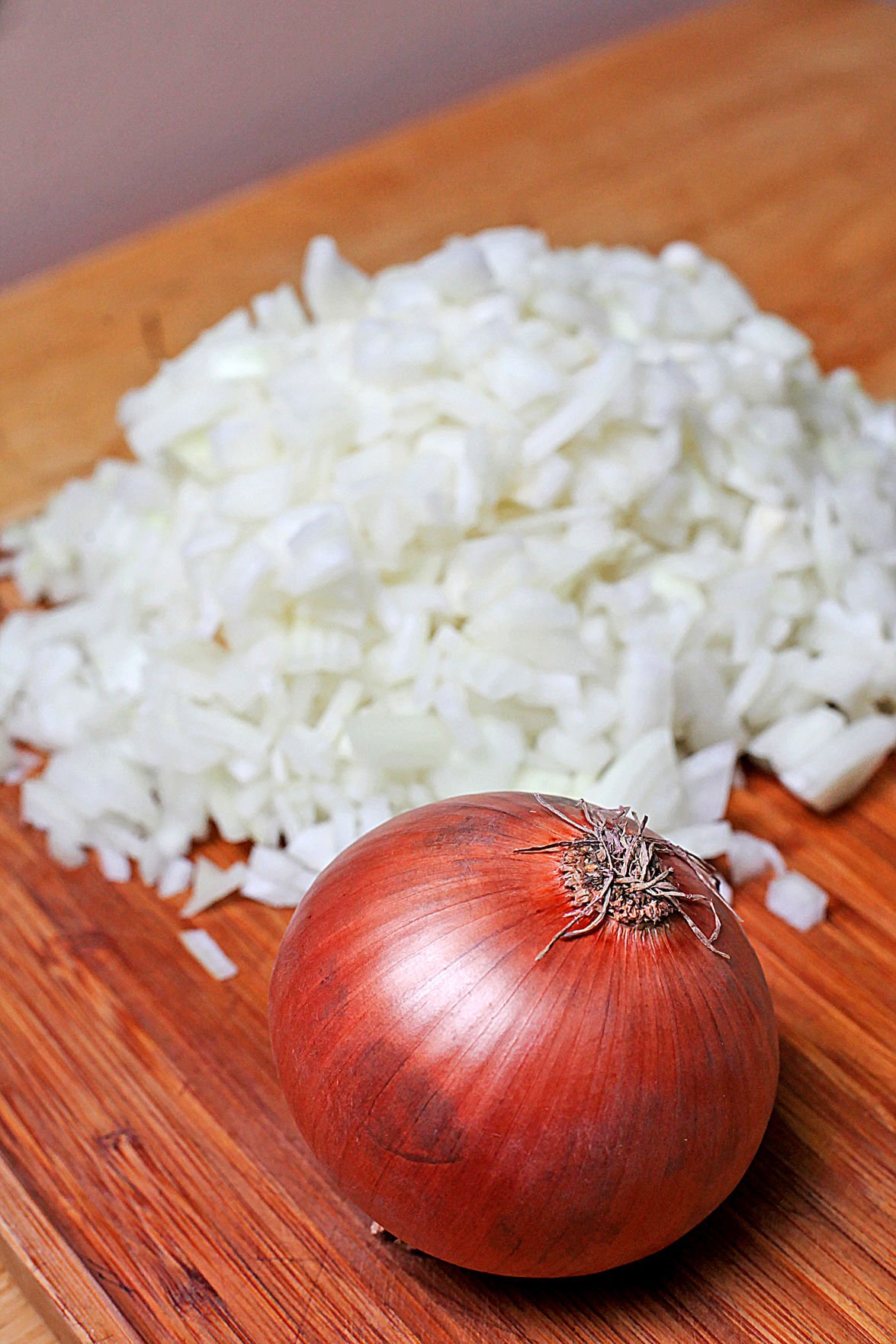 Onions are 75 percent water, so if planning to carmelize them, you need to chop a lot more than you might think. 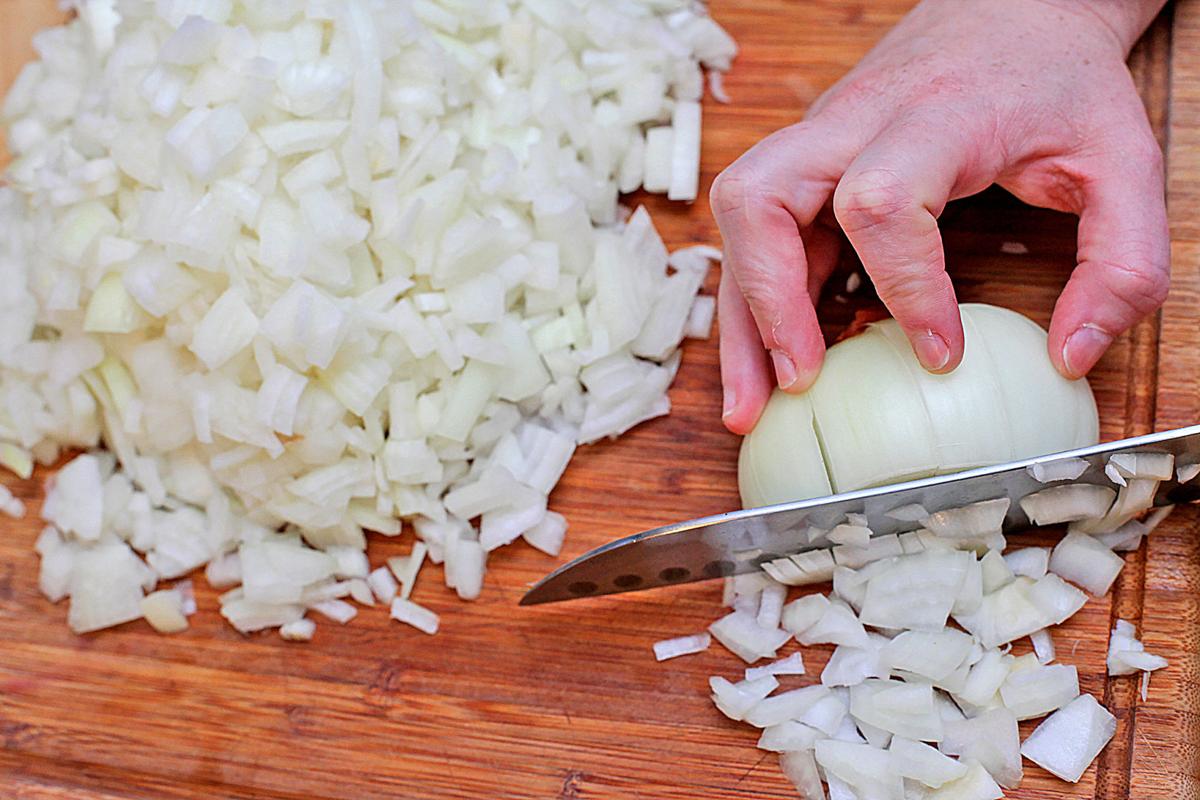 When chopping your onions, make lateral and vertical cuts first, stopping just short of the end. Then cut across the width to yield small even dice. 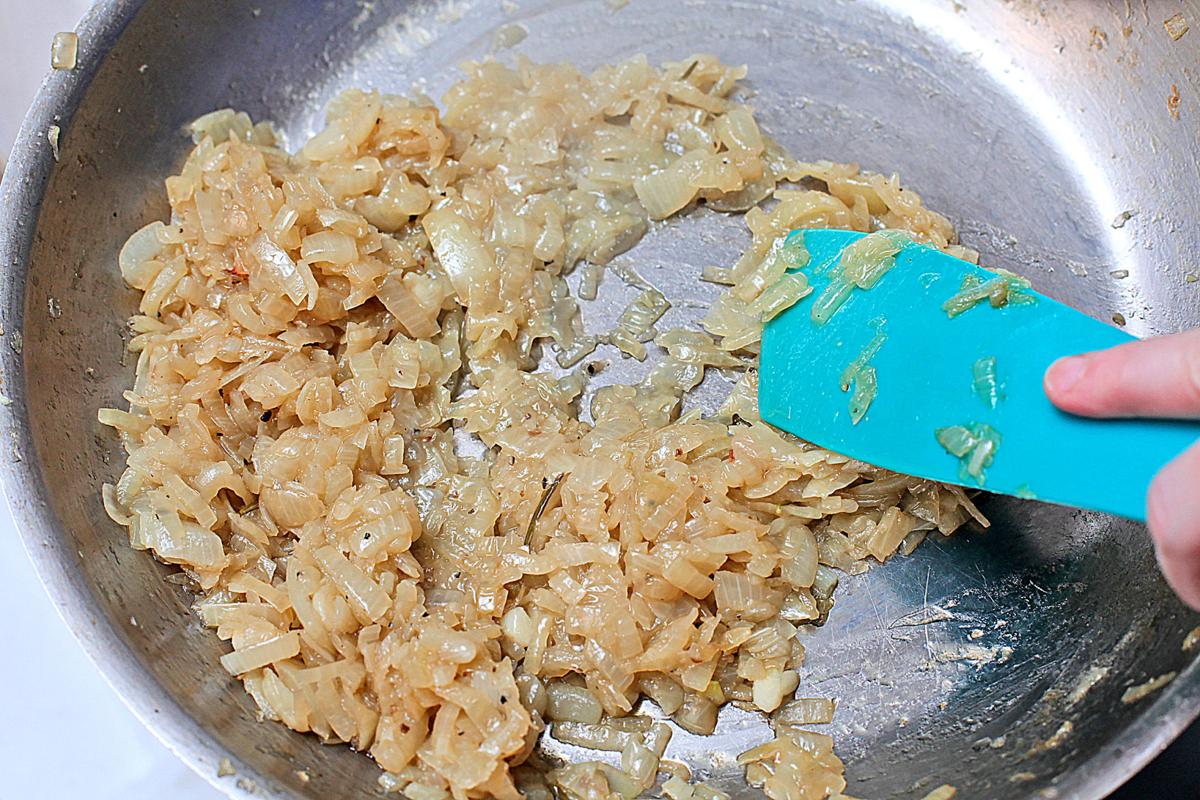 Onions should be cooked ‘low and slow’ to bring out their sweetness. As they caramelize they begin to darken in color.

Judge Doug Goelz spent decades dealing with other people’s problems. After he stepped down from the bench last month, he quickly discovered retired people have problems of their own. Suddenly beset with spare time, he tried to make spaghetti sauce from scratch and failed miserably.

“It was terrible!” he told the staff in the court clerk’s office on a Friday afternoon. The clerks and I got on the case immediately. What herbs had he used? Did he stir in a spoonful of sugar? Goelz started taking notes on a scrap of paper.

“Saute an onion, then add some wine and cook it off before you add the tomato sauce,” I said. That caught the learned judge by surprise.

“Sauteing an onion is basically the first step in making everything,” I told him. I was only exaggerating a little.

The case for deceit

People talk about onions the way they talk about the jocks from their high school: Smelly, sweaty, likely to make you cry. The two Formerly Tiny Humans in our household used to start every dinner by asking, “Does this have onions in it?” It was their version of saying grace. I smiled beatifically as I said their food was onion-free. I was lying through my teeth. Sauteed onions form the basis of countless soups, sauces, vegetable and meat dishes, and like most people who “hate onions,” they would happily eat them as long as they didn’t know.

When cooked low and slow, onions undergo a remarkable transformation, becoming mellow, nutty and quite sweet. They eventually dissolve into pure, rich flavor, which is why it’s worth learning how to tame this vegetal shrew. But first, a bit of history.

Beloved by cooks and quacks

Scientists don’t know where onions originated. Bets are on Egypt, Iran or “The Stans” — Pakistan, Kazakhstan, etc. They traveled well, so their use in both cooking and folk medicine quickly spread about 7,000 years ago.

People everywhere agreed they were good medicine, but they didn’t agree on what they cured. In ancient Greece, that notorious quack, Pliny the Elder, relied heavily on urine-based “medicines,” but he took a break from soaking lizards in pee to enumerate the many uses of onions. Dried onions with wine and honey could fix a dog bite right up, with the added advantage of making a nice marinade for chicken. Onions roasted in ash, mixed with breast milk and goose-grease and injected in the ears were, obviously, a go-to deafness cure. Served as a beverage, the same concoction would cure a person who was “suddenly struck dumb.” I’d bet the patients used their restored verbal skills to curse Pliny the Elder.

Onions between the toes

In his rivetingly titled 1808 tome, “A New Medicinal, Economical and Domestic Herbal: Containing a Familiar and Accurate Description of Upwards of 600 British Herbs, Shrubs, Trees, etc., Together With Some of the Most Esteemed and Useful Exotic Plants Now Generally Cultivated or Otherwise Made Use of in the United Kingdom; Arranged in Alphabetical Order: In Which is Copiously Displayed, the most recent and practical method of procuring and applying the peculiar properties of each species of plant in domestic economy, physic & the arts of dyeing and staining, etc., etc.,” author R. Parker noted his counterparts on “The Continent” used “onion water” to cure kidney and gallstones. Onions had once been popular for “dropsical complaints,” Parker said, but modern medical minds knew they were better for “suppurating tumors.”

Many people in the U.S. still swear by onions to treat coughs and colds — one popular theory holds than wearing onion-poultice-filled socks overnight will draw the sickness out through the soles of the feet. I haven’t tried that yet, but I do know onions cure boring food.

Chemical warfare in the kitchen

Members of the allium family aren’t above a bit of chemical warfare. Early in their life cycle, they grow bulbs that store up energy. The plants don’t flower until much later, so the bulbs are vulnerable to attack. To fend off hungry beasts, they produce a gas called propanethial S-oxide that is released when the onion is chopped up, according to Texas A&M University. When it comes into contact with the eye, a chemical reaction takes place, causing a burning sensation. The brain quickly formulates a plan of attack: flush out the enemy with tears.

The most common advice for not feeling like your eyes are being mustard-gassed is to cut them under water, but I’ve always thought this sounded like a good way cut a finger off. A ridiculous but effective alternative is to put some kind of barrier in front of your eyes — safety glasses, a snorkeling mask, etc. I once resorted to wearing my swimming goggles.

The chef strikes back

Most people sort of randomly hack onions into uneven chunks. I call it the Lizzie Borden Method. There is actually a very efficient way to get neat little uniform pieces that will make you feel very cheffy.

If you want smaller dice, make two slices through the center, so that you have three slabs of onion stacked on top of each other. Now, slice vertically down through the center of the onion, cutting it in half lengthwise. Again, stop just short of the tip. Make more vertical slices if you want smaller pieces. Finally, cut thin slices across the width of the onion. Voila!

Be they yellow, red or white

Red onions are best used raw or for pickling. Cooking tends to turn them green or even Cookie-Monster blue.

Yellow onions are cheap and have the nicest flavor in cooked dishes. They tend to have more of the tear-inducing chemicals, but according to Food Lab author and culinary genius J. Kenji Lopez-Alt, those chemicals contribute to their great flavor when cooked.

It requires a bit of patience, but it’s worth chopping up a pile of onions (really — like, at least six to eight medium-sized ones — they’re 75 percent water) and taking them on a magical journey of caramelization.

Out of the frying pan, onto the table

Put a large frying pan on medium heat. Add a pat of butter, a glug of olive oil and your finely diced onions. Throw in a little rosemary if you want, and sprinkle a light dusting of salt and pepper over them. Put a lid on the pan. Take it off after a few minutes.

Congratulations! You’ve just “sweated” your onions, which breaks down the cells and jump-starts the process of evaporating their high water content. Gently stir your sweaty onions. Within five minutes, they’ll turn translucent and soft. If you’re using them as a base for something else, this is usually where you’d add some wine or sherry, turn up the heat and cook it off.

You have options: Add stock and seasonings, your vegetable of choice, and simmer to make easy soup. Add carrots and celery, cumin and paprika as you saute, then stir in lentils or garbanzos and some tomato sauce to make a simple stew. Or add cumin, oregano and chili powder, then add ground beef to make all-American “taco meat.” Or blend a couple of spoonfuls of flour into the onions and brown it a bit. If you blend in stock, you’ve got gravy. If you blend in milk, you’ve got a white sauce. Add Italian herbs, red wine and good canned tomato sauce, and you’ve got spaghetti sauce.

Feeling daring? Stand by, and stir. Every couple of minutes, add a couple of tablespoons of water, scrape all the bits off the side and bottom, and stir some more. Your onions will gradually start to turn brown and smell like heaven. Keep going for about 15 to 20 minutes, adjusting heat to prevent them from scorching, until they’re a fragrant, sweet deep brown jam.

You can spread this on toast with goat cheese. You can add beef stock and simmer to make French onion soup. But the Super Bowl is coming, so I suggest real onion dip. Stir the onion jam into about two parts sour cream and one part mayonnaise. Eyeball it, starting out with maybe a cup total, and add more to taste. Add a squeeze of lemon and a dash of Worcestershire sauce. Feel triumphant, knowing your dip will be a balm to the soul as the Patriots storm the field yet again.