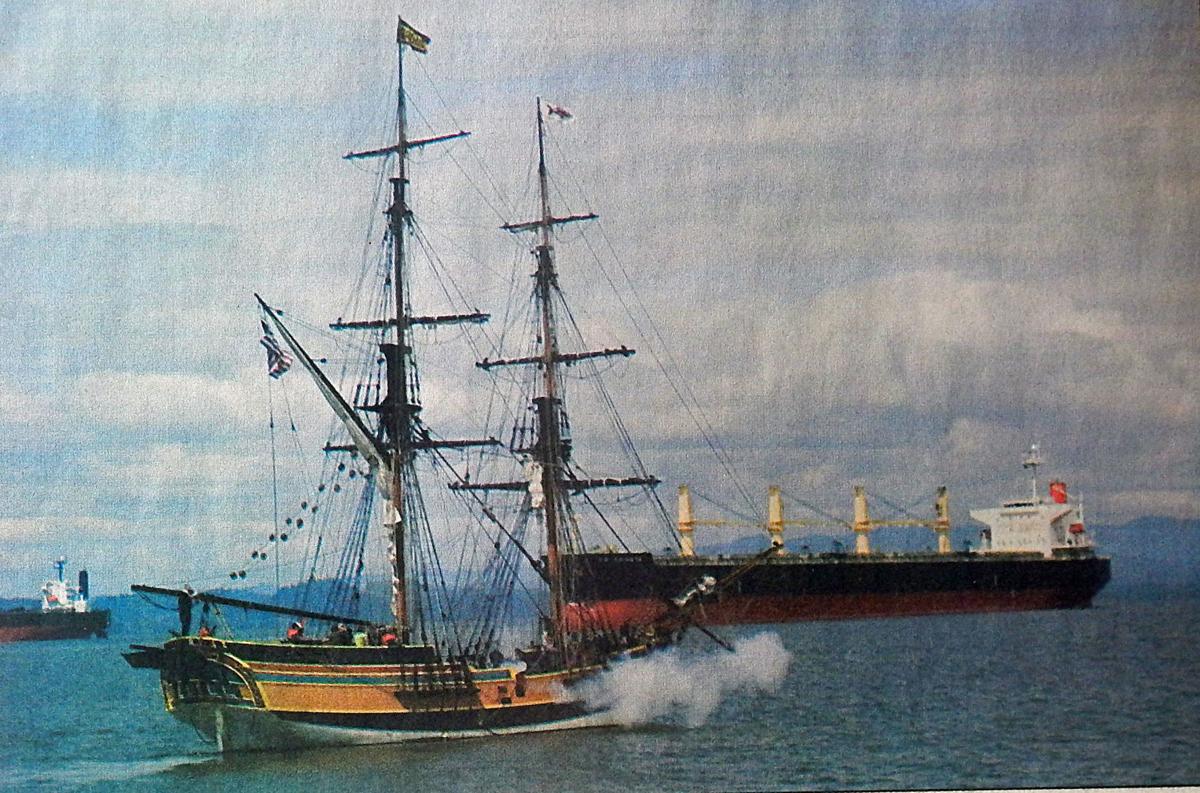 2009 — The Lady Washington fires off a cannon round in front of the 39th Street Pier before pulling into the East Mooring Basin to dock alongside the Hawaiian Chieftain. 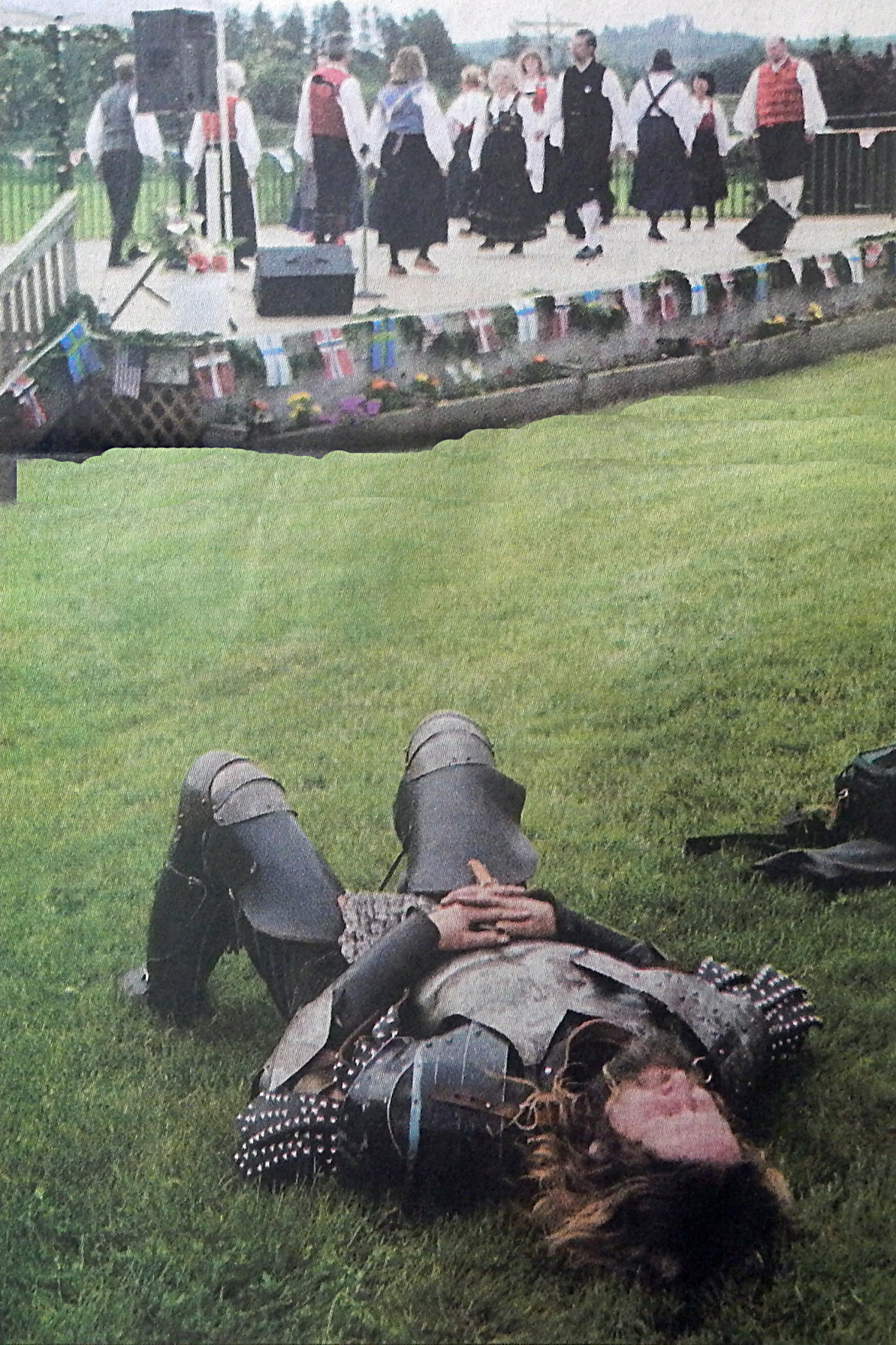 2009 — While the Astoria Viking, Nordic and Scandia Dancers perform on the outside stage at the Clatsop County Fairgrounds, ‘Lord Grog’ Shawn Kottmeier of Portland rests up before his battle during the viking encampment show. 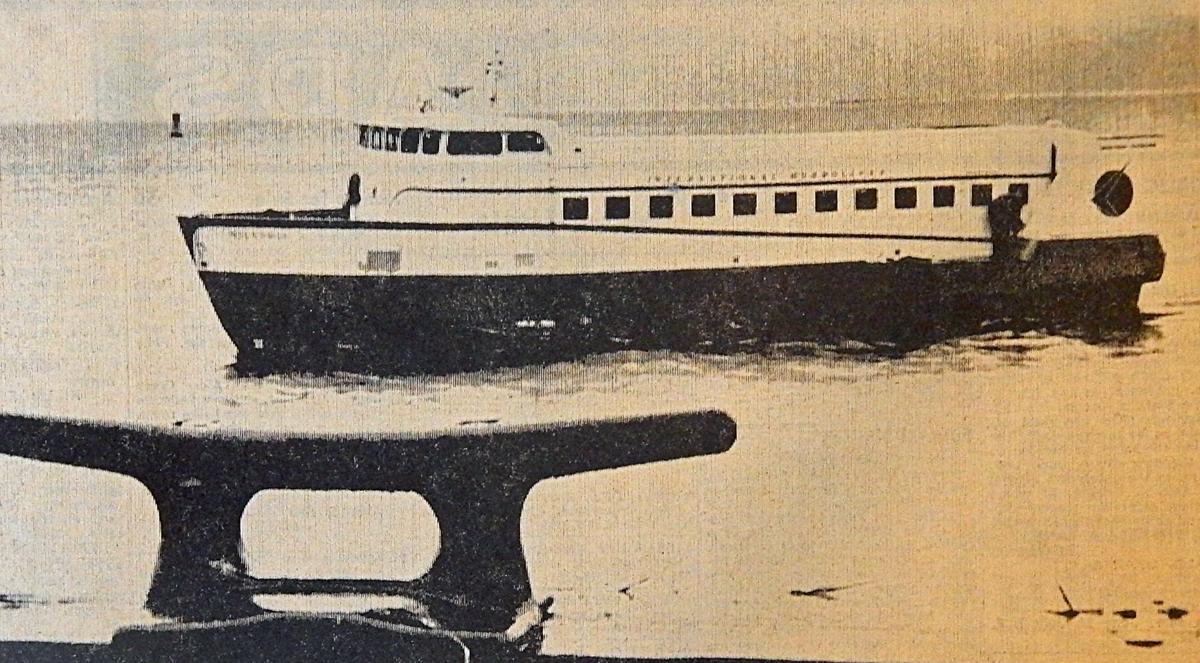 1969 — An unusual visitor to the Port of Astoria, this hydrofoil stopped in for fuel and minor repair on its way from Seattle, where it was built, to Southern California.

1969 — This Alaska-made totem pole will be presented to the Columbia River Maritime Museum by Secretary of State Clay Myers. Fred Cordiner, left, and museum director Rolf Klep look it over.

2009 — The Lady Washington fires off a cannon round in front of the 39th Street Pier before pulling into the East Mooring Basin to dock alongside the Hawaiian Chieftain.

2009 — While the Astoria Viking, Nordic and Scandia Dancers perform on the outside stage at the Clatsop County Fairgrounds, ‘Lord Grog’ Shawn Kottmeier of Portland rests up before his battle during the viking encampment show.

1969 — An unusual visitor to the Port of Astoria, this hydrofoil stopped in for fuel and minor repair on its way from Seattle, where it was built, to Southern California.

1969 — This Alaska-made totem pole will be presented to the Columbia River Maritime Museum by Secretary of State Clay Myers. Fred Cordiner, left, and museum director Rolf Klep look it over.

For the four young women who made up this year’s Scandinavian Midsummer Festival Court, there was bound to be much anticipation leading up to festival weekend.

But as much as they were looking forward to finding out which of them would be crowned as the festival’s 42nd Miss Scandinavia, they were all also eagerly awaiting a particular treat that usually is available just once a year — lefse.

Miss Denmark Jodi-Lynne Meyer, crowned Miss Scandinavia Friday night, said there was no doubt that she’d be making a beeline to the Sons of Norway lefse booth for some of the folded flatbread that had been slathered with butter, cinnamon and sugar.

“It’s so good, you have to wait all year for it. It’s the anticipation that makes it that much better,” she said.

After being thrown from her seat and hitting her head in the rush-hour Metrorail crash Monday, Warrenton native Jody Wickett went to work helping other injured passengers.

Wickett, a registered nurse, was in the moving train that plowed under another stopped train Monday in Washington, D.C.

She told CNN she was sending a text message when she felt the train hit something. She and other passengers went flying from their seats. She found many people on the train were injured much worse than she was, and she helped pull back metal and debris to remove people who were pinned between the cars.

The crash — reportedly the worst in the history of the city’s Metrorail system — sent more than 70 people to area hospitals.

Cannon Beach Fire & Rescue and the Coast Guard rescued two Seaside boys at 6:45 p.m. Monday from the rocks off Tillamook head north of the Tillamook lighthouse.

Kevin Walsh, 14, and Ronald Dean, 14, decided to walk from the Cove in Seaside around Tillamook Head while the tide was out. But when the tide came in, they were stranded on rocks, said Cannon Beach Fire Chief Cleve Rooper.

Clatsop County’s unemployment rate continued to climb in May, a month that normally brings seasonal job growth as summertime approaches.

The county’s seasonally adjusted unemployment rate jumped to 11 percent in May from 10.2 percent in April after a month-long plateau between March and April, according to the Oregon Employment Department.

Do Columbia River gillnetters have prior right of use to drifts maintained and fished over the years, and should they be compensated for drifts closed off by the government agencies?

Russell Bristow, executive secretary of the Columbia River Fishermen’s Protective Union, is seeking an unprecedented $80,000 reimbursement from Congress for a group of Westport gillnetters.

Test case is the Westport Island Drift, closed by the Army Corps of Engineers a few years ago. The engineers drove pile dikes in the area in an effort to maintain the ship channel at its present depth.

Eight fishermen were forced to stop operations in the closed section of the river. In 1952, they had re-established “drift right” in the area, rights not recognized by law but respected by most commercial fishermen on the river.

How are drift rights established? Bristow cites traditions started in the 1800s. Fishermen cleared their areas of all snags and bottom obstacles, making a clear run for the fish and safe passage for navigation. Clearing work is done each year, and expense accounts are kept.

Bristow is presently copying bills of sale and expense sheets from various river areas to show Congress what is involved, in time and money, in keeping the areas clear. He contends that his evidence will show that gillnetters provide a service beneficial to the state as well as themselves.

Elaine Huhta, Miss Clatsop County for 1969, and 22 other candidates selected in local pageants will compete in the 23rd annual Miss Oregon Pageant in Seaside July 9-12 for the title of Miss Oregon and the opportunity to become the 42nd Miss America.

The proposed nuclear power plant will be on the Oregon side of the Columbia River 42 miles northwest of Portland.

The authority’s staff report on the proposal said emissions from the plant should have no measurable effect on the surrounding environment.

It was not a bright picture that was painted of the future of the Columbia River salmon industry last week at a conference between the Oregon fish commission, representatives of the industry and members of the legislature’s fisheries interim committee, but, dark as it was, there was no disposition to accept it as one without background of hope.

There was, however, general agreement that to save what is left of it and to restore some of its lost proportions there must be a new program, one markedly different from that of the past and one which will require more finances than are now available.

The encroachment of civilization has brought tremendous problems, what with obstructing dams, irrigation diversions, stream pollution, destruction of spawning and other developments interfering with nature’s processes for preserving the salmon runs. Such menaces will increase as the development of the many other resources of the river and its tributaries proceeds. Only man can repair the damages that man is doing. Nature has been hopelessly handicapped.

Jack Dempsey, the huge-shouldered killer of the ring and the most colorful world’s heavyweight fight champion in boxing history, will appear on the stage of the Liberty theater tonight in a special bond show that opens at 8:30 o-clock.

Two letters have been received by this newspaper recently, both of them complaining about conditions in Astoria growing out of the crimes and misdemeanors of members of the Navy. One was from a civilian residing in Jeffers Gardens. The other was from an Astorian in the Army, who made his observation while on furlough in his home town.

The charges assessed against that group of obstreperous bluejackets who step over the line of decency and reasonable conduct we think are too extravagantly applied to all of the Navy personnel, and fuzzy up the true picture

Next month, when the 50th and final Kaiser carrier shall have been put in commission here, there will have been 3,000 officers and about 30,000 enlisted men and non-coms through Astoria in the 12-month period since July of 1943 — on this program alone. In addition there are the fixed personnel of the Naval Air Station at the port docks. A third naval facility of considerable size is the naval air station’s airport, where squadrons of fighting planes have come and gone, carrying their crews with them, and leaving behind the maintenance and operation complement of the facility, which is considerable.

Now, it should be recognized that with this number of men, drawn into service from all walks of life and all points of the country, there may be expected a percentage of tough guys, of social misfits, of embryo rascals and more than a corporal’s guard of brainless youngsters who simply don’t know up from down. Mix this small minority up with one part emotion, one part adolescence, one part away-from-home-for-first-time and two parts whiskey or fortified wine — and what have you? But it should be remembered, above all, that it is still a minority and not a large one either.