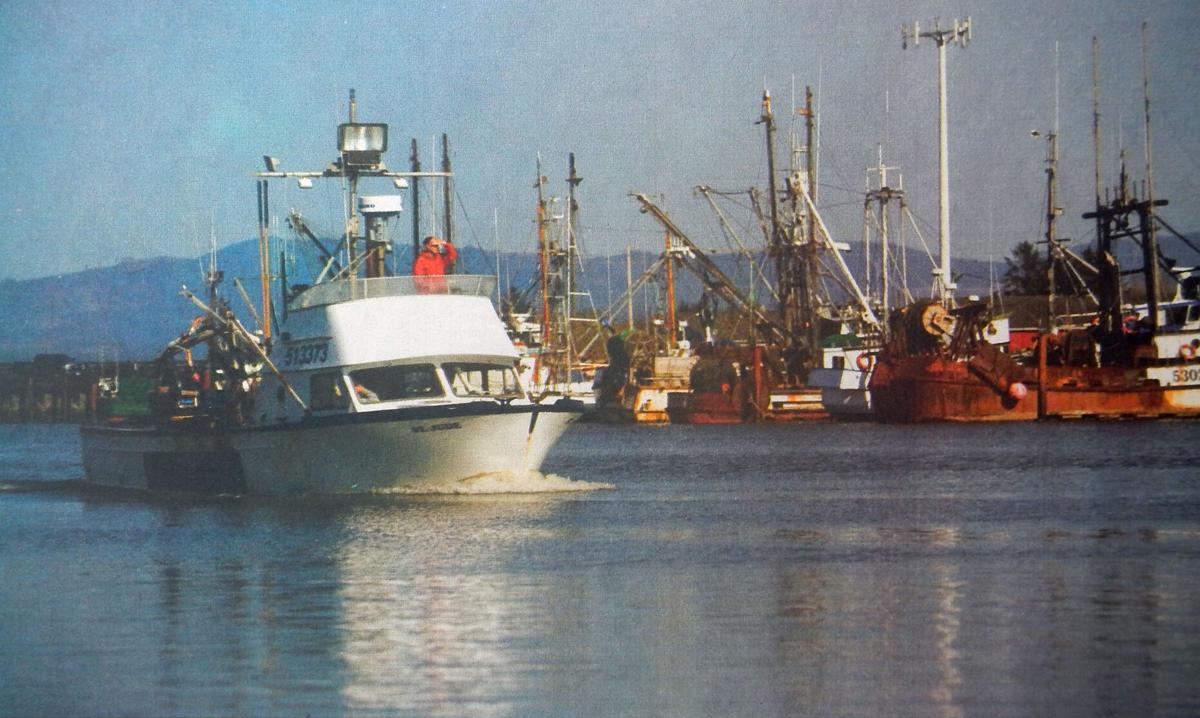 The St. Jude, a commercial fishing boat owned by Jeremy Olson, motors through the Hammond Marina on the Skipanon River in 2011 to deliver the day’s catch of crab to Warrenton Deep Sea. 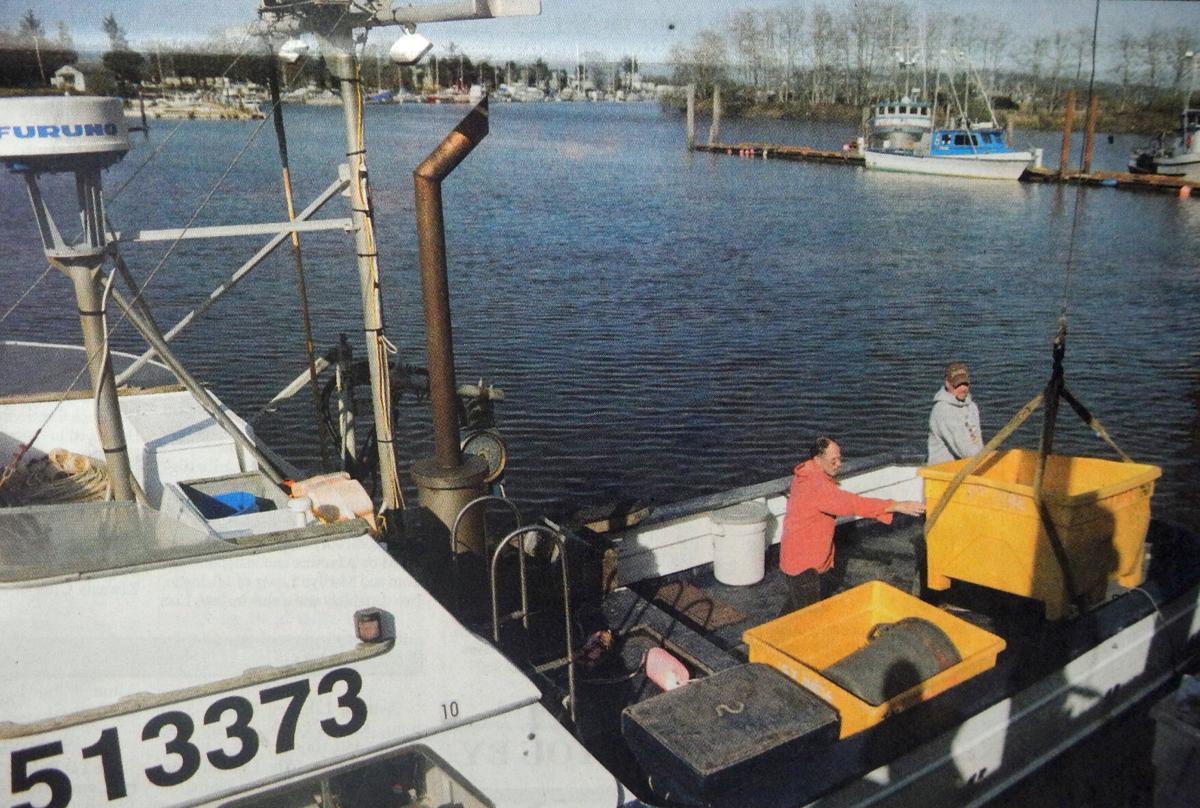 In 2011, Larry Olson, left, and his son, Tyler Olson, deliver a load of crab caught on the Columbia River to Warrenton Deep Sea on the Skipanon River. 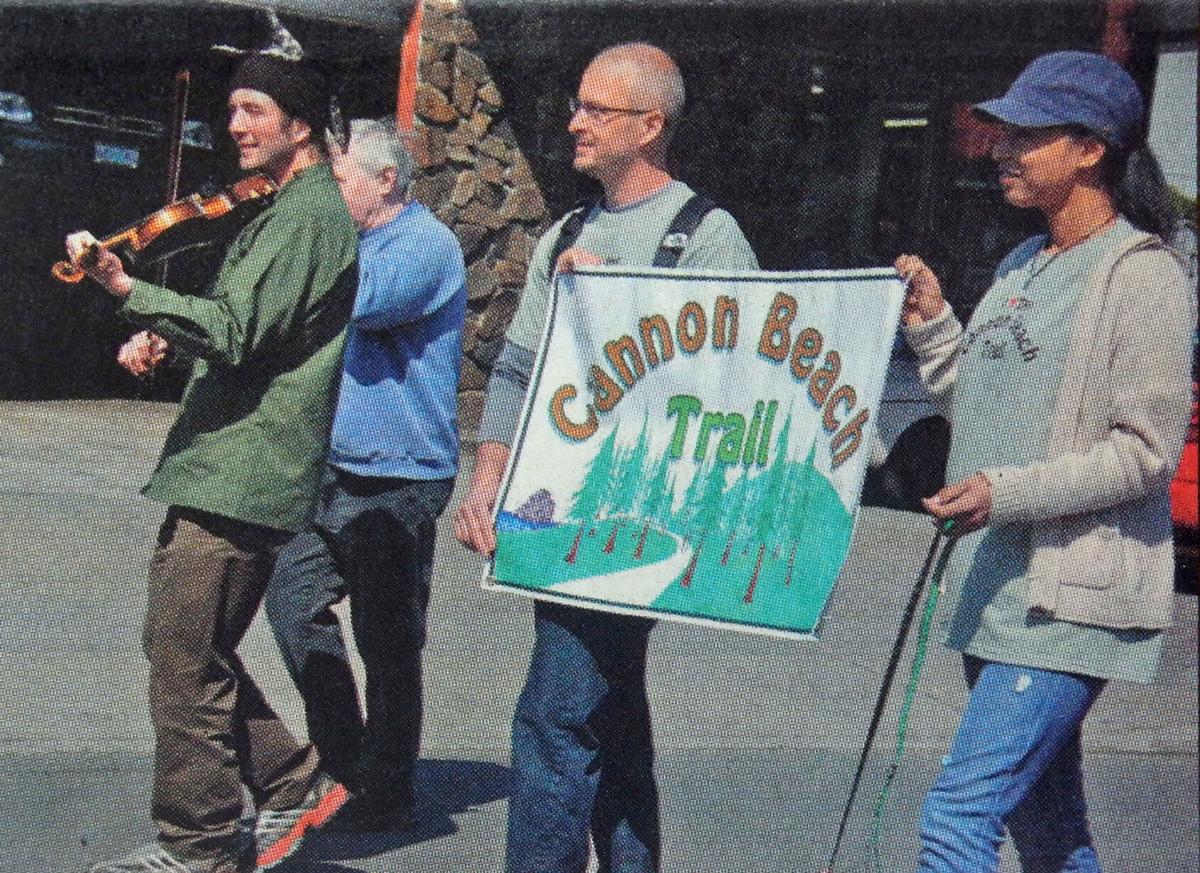 Supporters of the Cannon Beach Trail are led by a fiddler down Hemlock Street in Cannon Beach during the town's 2011 Earth Day parade. 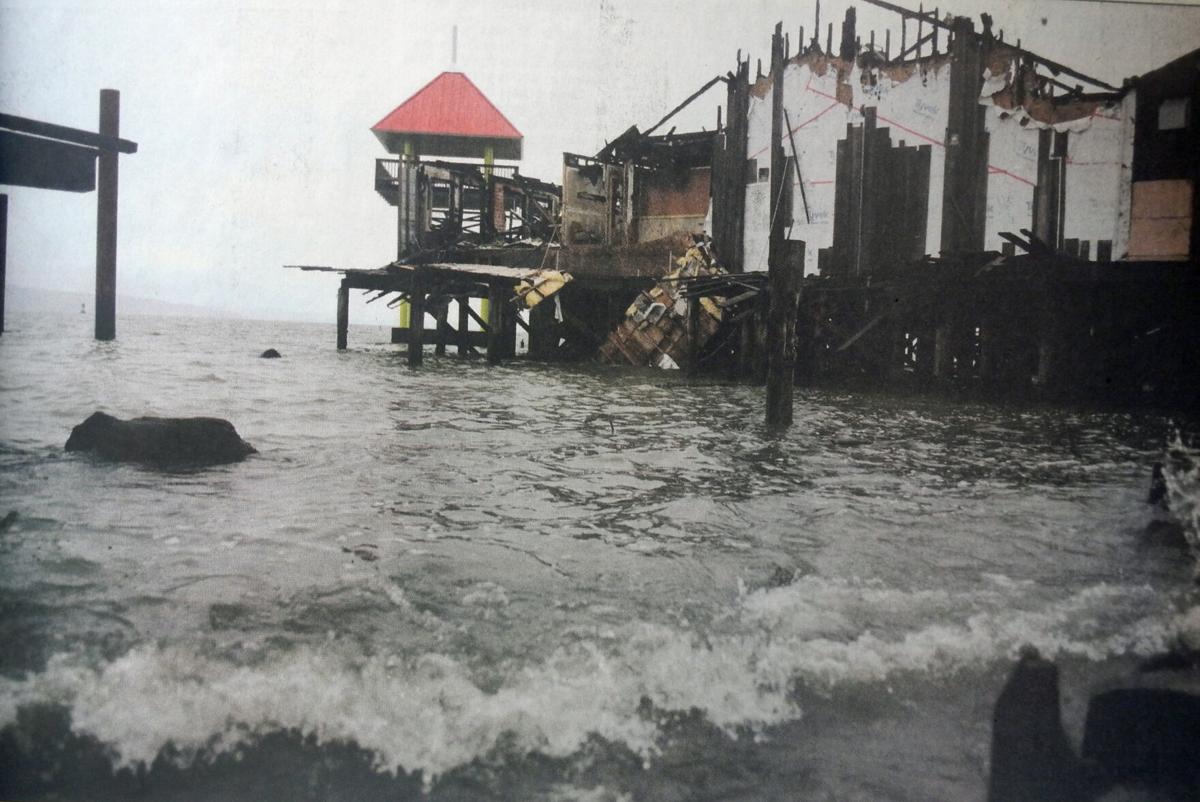 In 2011, waves created from the wake of a passing cargo ship crash ashore next to the old Cannery Cafe building that burned down. 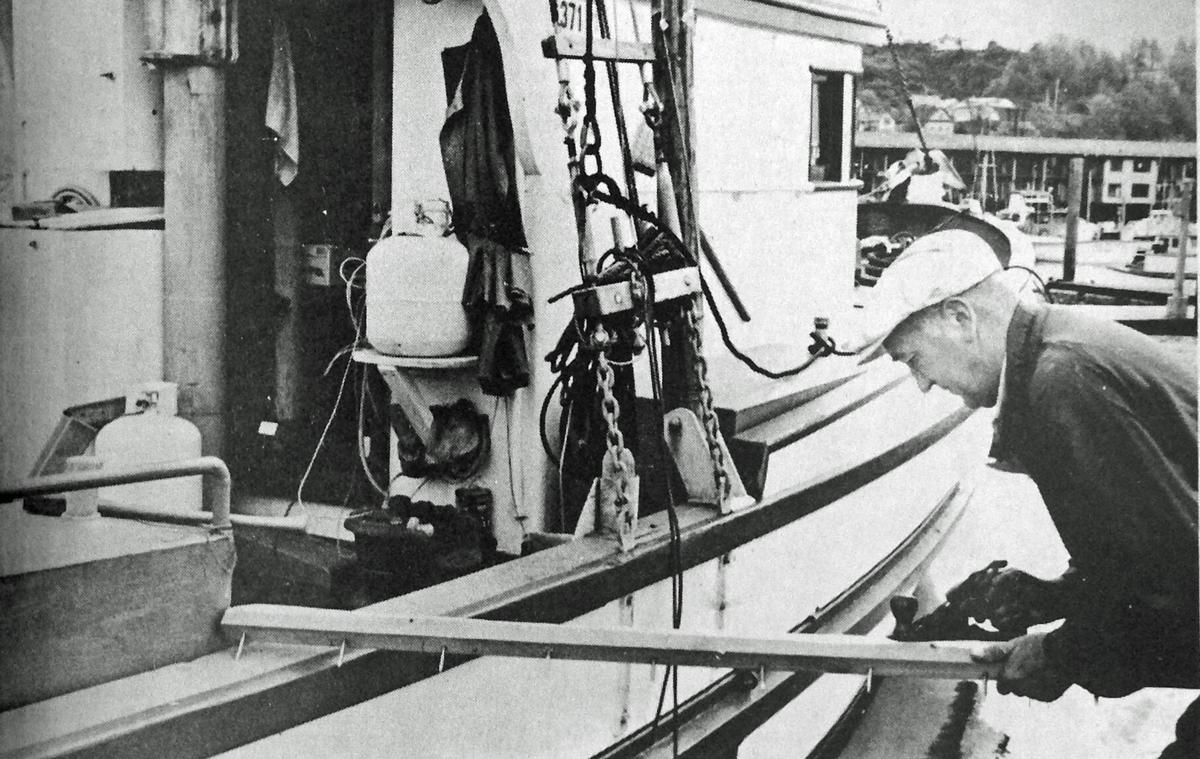 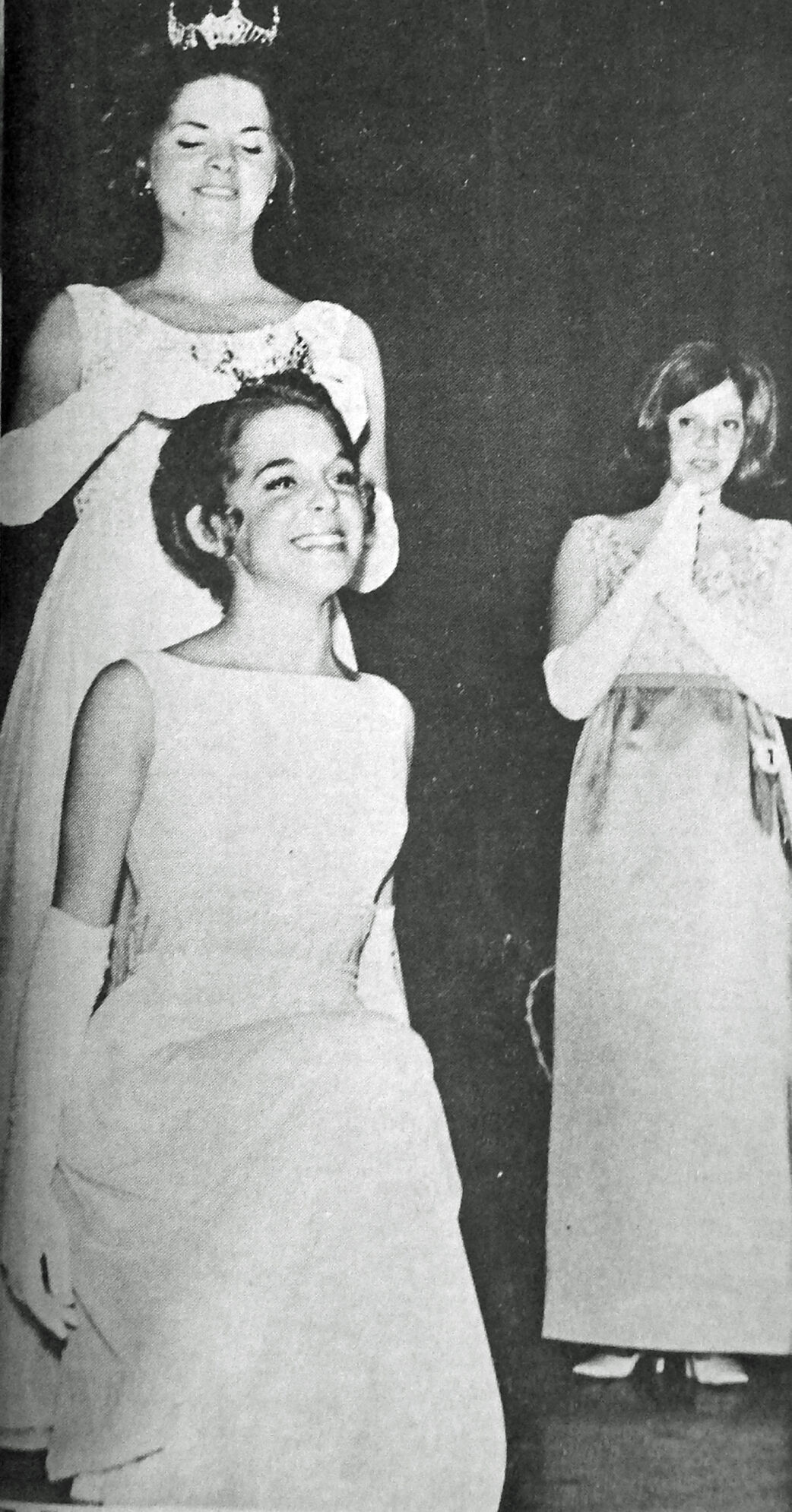 The St. Jude, a commercial fishing boat owned by Jeremy Olson, motors through the Hammond Marina on the Skipanon River in 2011 to deliver the day’s catch of crab to Warrenton Deep Sea.

In 2011, Larry Olson, left, and his son, Tyler Olson, deliver a load of crab caught on the Columbia River to Warrenton Deep Sea on the Skipanon River.

Supporters of the Cannon Beach Trail are led by a fiddler down Hemlock Street in Cannon Beach during the town's 2011 Earth Day parade.

In 2011, waves created from the wake of a passing cargo ship crash ashore next to the old Cannery Cafe building that burned down.

CANNON BEACH — It wouldn’t be Earth Day in Cannon Beach without a parade, even if that parade consists only of a few puffins, some dogs and about 30 people marching four blocks down the center of town.

Led by Mayor Mike Morgan and Barbara Linnett, this year’s Gaylord Nelson Award winner, Saturday’s parade was over almost as soon as it began.

“Come join us,” Ed Johnson shouted to passersby who gawked at the parade participants suddenly appearing in the middle of Hemlock Street. Johnson and his wife, Barb Knop, an Earth Day committee member, wore puffin masks and waved to those enjoying the midday sunshine.

Turn the clock back to early December of last year for the North Coast Dungeness crab fleet and the picture was pretty bleak.

First, it was the crab — they weren’t consistently full of meat — so crab fishermen waited extra weeks to start the season.

And then, once the season got started, unforgiving storms rolled in through the rest of December.

For John Corbin of the Astoria Crab Marketing Association, and many Oregon crabbers, the outlook for the 2010 to 2011 crab season wasn’t bright.

But before long, things shifted. Weather improved, and pots came up fuller.

“It just started getting better and better,” Corbin said. In landings and value, this season will probably end up being very close to the last one, he added.

SEASIDE — Seaside leaders are examining signs and other safety features at a downtown boat ramp after the deaths of two people.

A man and woman from Washington state died after their SUV plowed into the Necanicum River at Quatat Park Monday night.

Seaside Police Lt. Dave Ham said the couple might have been lost and didn’t realize they were on a boat ramp leading into the river.

The North Coast’s troubled bus district has been notified by the state to stop illegally providing transportation to cruise ships immediately — or face a shutdown.

Although facing financial difficulties, the Sunset Empire Transportation District has set up temporary fixed routes to the Port of Astoria for cruise ship passengers at the charge of $47 per hour. And those routes are open to the public at regular bus stops, said Scott Earls, the district’s operations manager.

But the Oregon Department of Transportation sees this as supplying a charter service, which is against federal law, Dan Schwanz, Sunset Empire’s interim director, told the district’s board of directors at Thursday’s meeting.

A cease-and-desist letter has been issued, Schwanz said, the latest in a series of difficulties for the district.

Although it’s something that’s been in practice for eight years, it only recently caught the state’s eye.

“All it took was a letter to the editor in the paper,” Schwanz said.

That letter appeared in the April 22 edition of The Daily Astorian.

Teresa Anne Hunt was crowned by Mary Craig, the 1970 Miss Clatsop. The red-haired lass is a senior at Knappa High School.

A large aluminum plant, similar to the one proposed for Warrenton by American Metal Climax, would increase business in Clatsop County by more than $20 million, according to a study conducted by Oregon State University.

Jim Bolin, manger of the trollers’ association, said processors offered to pay 73 cents a pound for large salmon, 53 cents for medium and 43 cents for small.

The U.S. Coast Guard expects to complete cleaning up an oil spill on the ocean side of the Long Beach Peninsula, near Oysterville.

The spill appears to be bunker “C” oil. The Coast Guard hired a commercial rig to scoop up the worst parts of it, according to a spokesman at the Astoria Air Station. The oil had apparently been in the ocean for some time, and had congealed into small patches which looked like tar, he said.

Although they took no official action, members of the Fishermen’s Interlocking Committee spoke against filling of the Baker Bay estuary for expansion of the Port of Ilwaco’s mooring basin.

The committee is an unofficial organization of commercial and sport fishermen who meet together to discuss mutual problems. Russell Bristow, of Astoria, is executive secretary of the Columbia River Fishermen’s Protective Union and the committee’s chairman.

Bristow raised the question of whether the Port of Ilwaco could construct their proposed mooring basin expansion “without fouling up Baker Bay.”

There is a question of what effect it will have on the ecology, he said. “Estuaries are the bread basket for all of the river fish. If it runs into fouled-up estuaries, it is a dead fish.”

Portland may have its bear visitor, but Astoria has its deer.

For the second time in a week, east end residents had visitors from the nearby woods — a sleek pair of does from the band of deer that lives in the forests just beyond the city limits.

The two does wandered through the gardens of several households, nibbling away at vegetables just coming through the ground and chewing up some blooming primroses and other flowers.

Salmon and civilization are incompatible so far as present scientific knowledge is concerned. The need to keep the salmon in spite of man-made barriers presents the greatest challenge in the field of aquatic biology.

This was the assertion of Dr. Frederick F. Fish, in charge of Pacific Ocean coastal fish culture investigations for the U.S. Fish and Wildlife Service, in an address to the seventh annual biology colloquium held at Oregon State College under the sponsorship of Phi Kappa Phi honor society.

The lower Columbia and much of the Pacific Northwest is supporting the Port of Ilwaco in Washington state in its effort to obtain federal appropriations for deepening the west channel to Baker Bay and establishing a mooring basin for 350 fishing boats in Ilwaco.

Representatives of the Seattle Chambers of Commerce, Portland Chamber of Commerce and deep sea fishermen’s organizations were among the many Columbia River fishing and packing interests appearing at a hearing in Ilwaco on the feasibility of the proposed improvements.

Dredging of the west channel into Baker Bay, which reduces the distance from the bar to Ilwaco more than 10 miles by eliminating the long trip around Sand Island, has already been approved to the depth of 10 feet.

Two civilian divers from the U.S. Navy tug USS Discoverer boarded a landing craft from which they expected to descend into the sunken hull of the USS Driver in the Tongue Point anchorage. The unfinished naval craft sank there, despite efforts to keep it afloat by pumping.

Ocean fishermen arriving in port this afternoon reported that two U.S. Navy patrol craft, being towed out of the Columbia River Friday night by tugs, drifted into Peacock Spit when their tow lines parted in a heavy sea just outside the port. Aboard the patrol craft, which had no power, were skeleton crews.

Because of the rough seas, the fishermen reported, the tugs were unable to maneuver in time to cast a line to the small patrol craft. Fishermen said the U.S. Coast Guard motor lifeboat Triumph rushed into the spit and with naval craft succeeded in getting lines on the patrol craft and bringing out the boats and men safely.

U.S. Navy authorities denied that any considerable quantity of materials of any value are being thrown upon the city dump, as was charged by U.S. Rep. Walter Norblad.

Conceding that some quantities of usable material undoubtedly have found their way to the dump from ships being decommissioned here, despite naval precautions against waste, naval authorities appealed to the public to “bring it to our attention so that we can take corrective action.”

Orders to place the naval air station on a caretaker status effective June 1 were received by the commanding officer of the station on Friday.

Receipt of the orders confirms previous reports received that the U.S. Navy was planning to eliminate the station as an operating base.