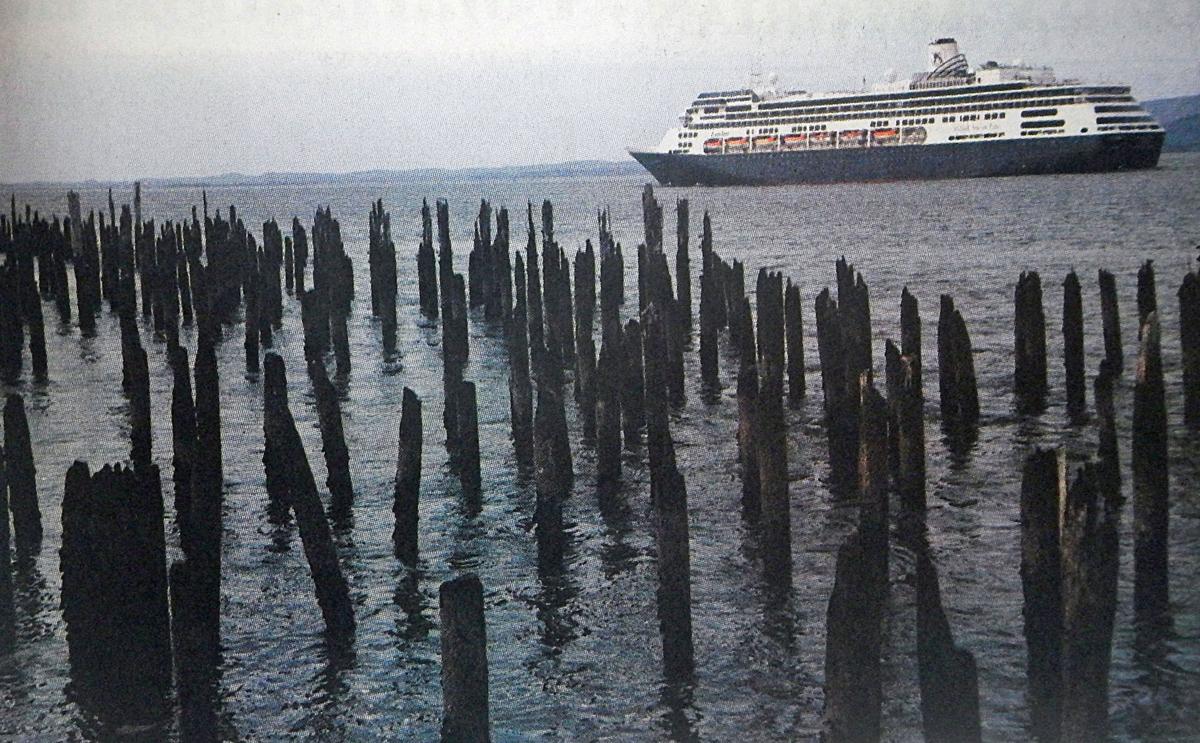 The Holland America cruise ship Zaandam steams past the Hammond Marina after spending Sunday docked in Astoria in 2010. 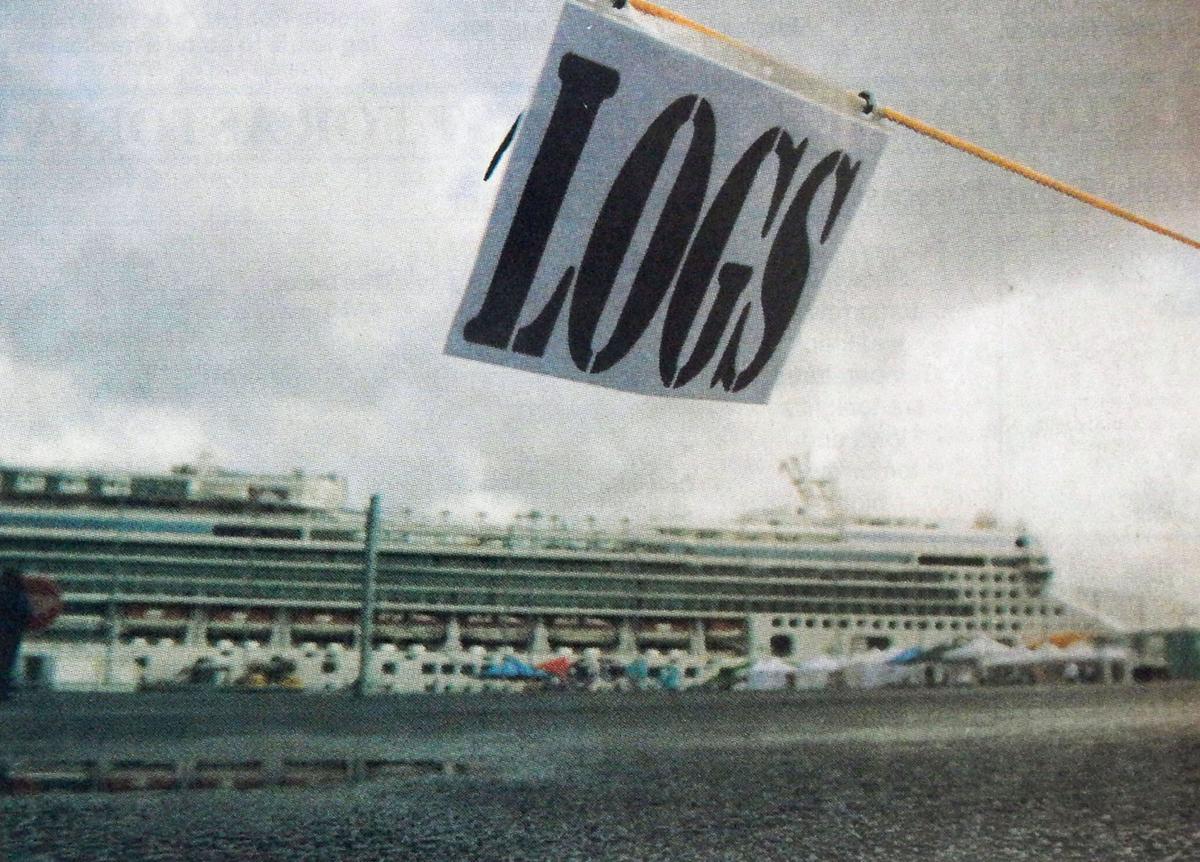 Following a vote to lease Pier 1 for log exports, the Port of Astoria held a ‘dress rehearsal’ of what it will be like maneuvering cruise ship tourists through a log yard in 2010. 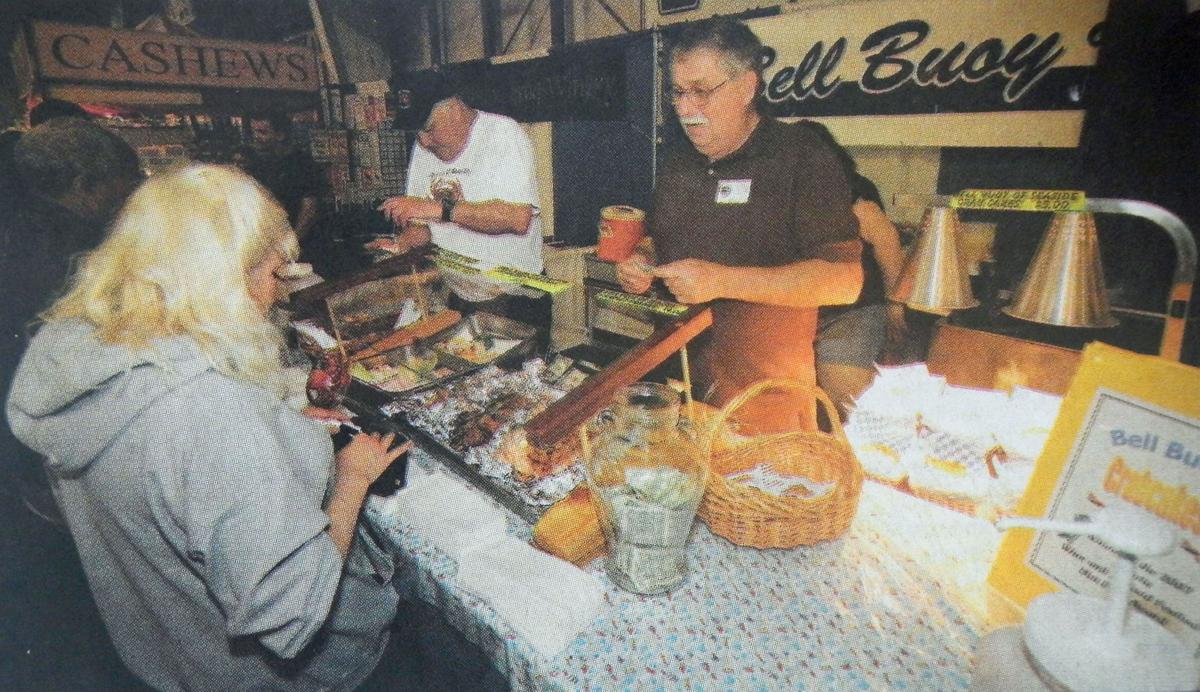 Terry Hartill, right, serves a customer at the Bell Buoy booth during the Astoria Warrenton Crab, Seafood & Wine Festival in 2010.

Footprints make impressions on hail in 1970. 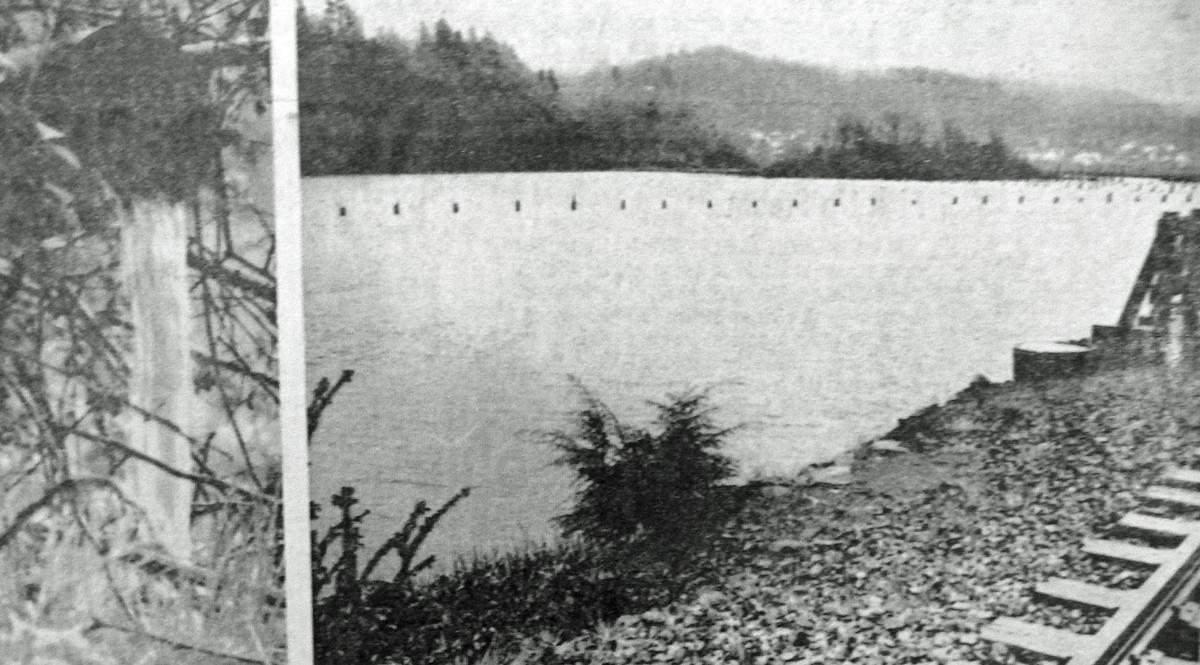 A sewer outflow, left. Right, the proposed site of the Astoria sewage treatment lagoon in 1970. 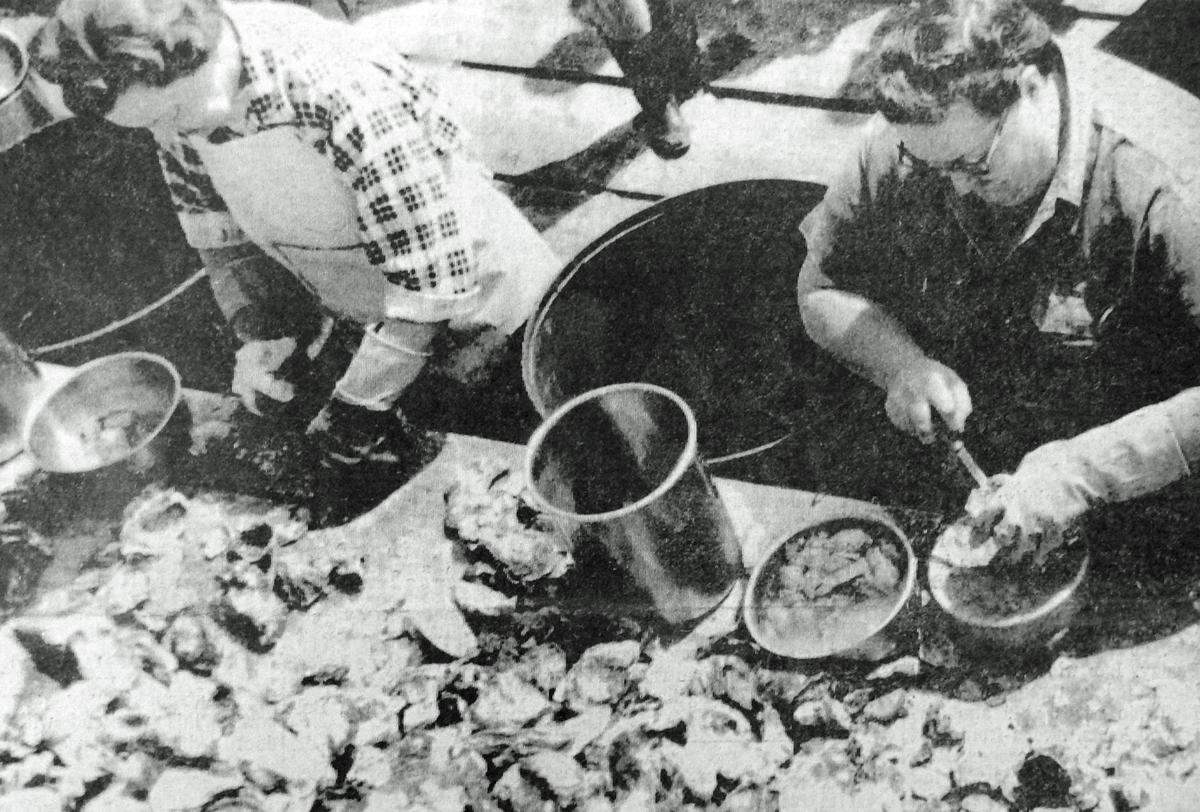 Contestants compete in the oyster opening contest on the Long Beach Peninsula in 1970. 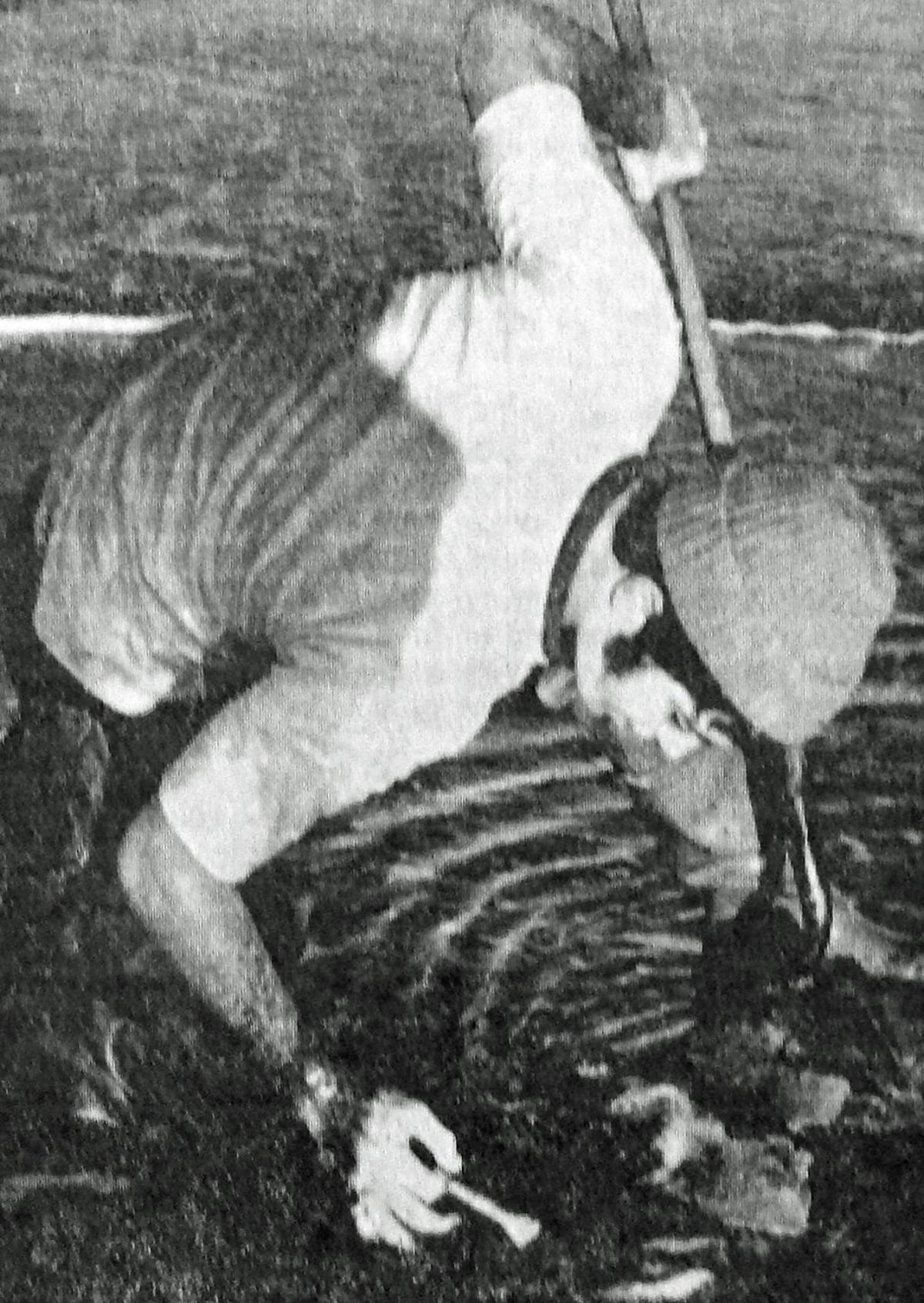 Minus tides encourage clam diggers in 1970. 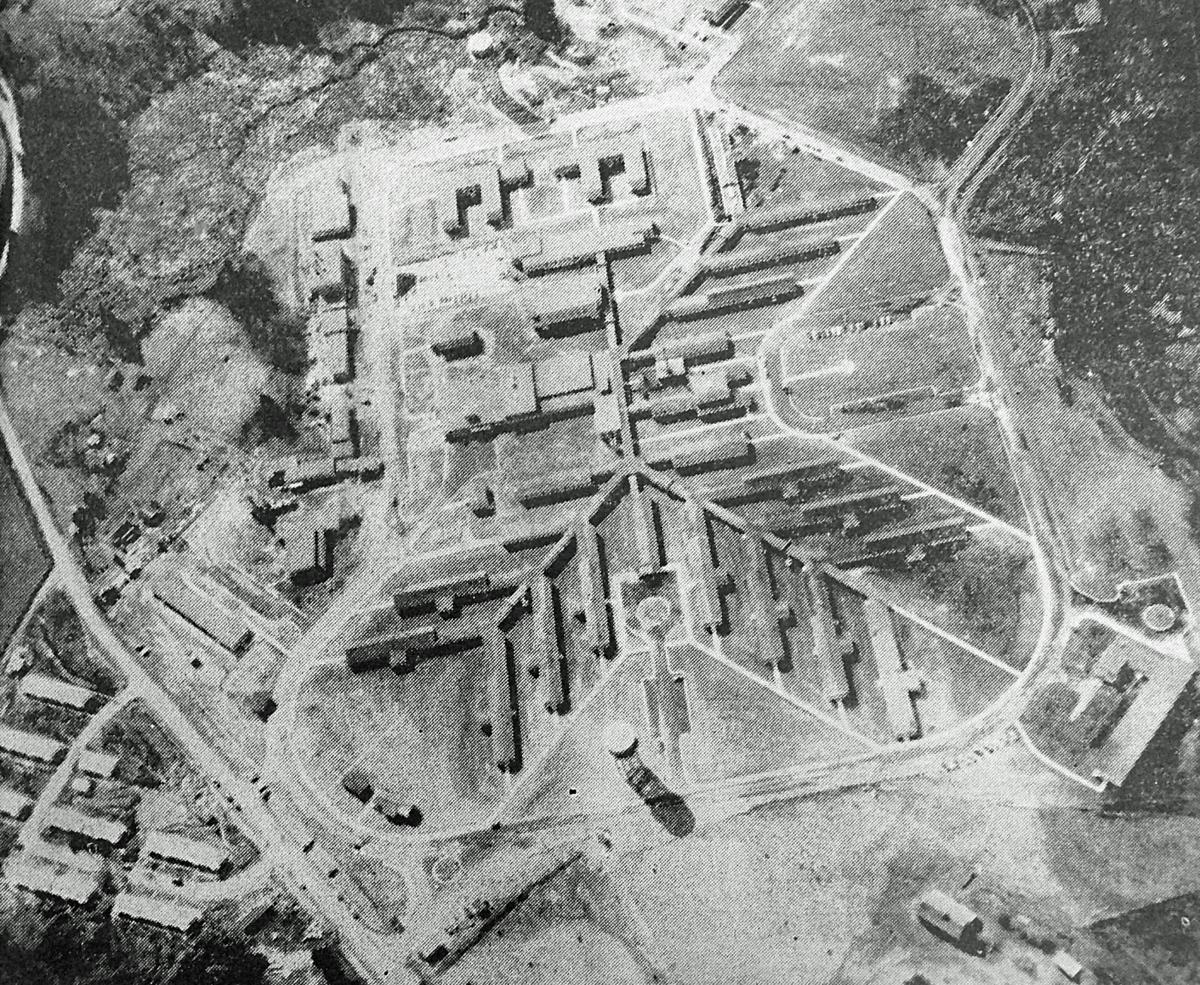 An aerial view of the U.S. naval hospital in Astoria in 1945.

The Holland America cruise ship Zaandam steams past the Hammond Marina after spending Sunday docked in Astoria in 2010.

Following a vote to lease Pier 1 for log exports, the Port of Astoria held a ‘dress rehearsal’ of what it will be like maneuvering cruise ship tourists through a log yard in 2010.

Terry Hartill, right, serves a customer at the Bell Buoy booth during the Astoria Warrenton Crab, Seafood & Wine Festival in 2010.

Footprints make impressions on hail in 1970.

A sewer outflow, left. Right, the proposed site of the Astoria sewage treatment lagoon in 1970.

Contestants compete in the oyster opening contest on the Long Beach Peninsula in 1970.

Minus tides encourage clam diggers in 1970.

An aerial view of the U.S. naval hospital in Astoria in 1945.

Despite multiple calls to slow down, the Port of Astoria Commission moved ahead with a lease of Pier 1 for log exports Tuesday night.

The board voted unanimously to approve a five-year lease of 3.1 acres on Pier 1 to Westerlund Log Handlers of Bremerton, Washington, for $11,208 per month – around $134,500 a year.

The project is expected to deliver $1 million in annual revenue to the Port.

Many at the meeting told commissioners to slow down and explain to the public exactly what the impacts of the export project will be.

Jay Bornstein of Bornstein Seafoods asked the board members why they hadn’t done an environmental and economic impact study on the effects of the log project.

“We’ve heard it’s $1 million to the Port, but we haven’t heard the cost to the Port,” he said.

Whether you had a hankering for an up-to-your-elbows crab dinner or a wine flight of fancy, if you were among the thousands of visitors to the Astoria Warrenton Crab, Seafood & Wine Festival over the weekend, surely your taste buds got a treat.

There were so many choices — from seafood and snacks to wine and beer — that it was difficult to even know where to begin.

Twenty years ago, a massive dredging effort to deepen 103 miles of the mighty Columbia River held the promise of securing Oregon’s connection to the rest of the world.

At 43 feet, the channel — otherwise too shallow to compete with deep-water ports — could play host to today’s larger vessels and more efficiently send Northwest wheat and steel to markets around the globe.

But with the Columbia River Channel Improvement project drawing to a close by the end of this year, the environmental and economic promises of the now $178.4 million project could fall short of the taxpayer investment, especially in an economy that’s resulted in an unprecedented decline in international trade, a review by The Oregonian found.

The Warrenton-Clatsop Plains area suffered the most damage from Monday’s freak “winter weather” storm, with one building struck by lightning, about 2 inches of hail deposited in spots and a mixture of rain and snow.

The storm, described by Richard Jones, manager of Pacific Power & Light, as a “pocket of winter weather,” knocked out power in the Warrenton area for as long as two hours, and some isolated outages took longer to repair.

A site east of where the old Hammond mill stood, just west of Tongue Point, was chosen Tuesday night by the Astoria City Council for a 25-acre sewage treatment lagoon.

In so acting, the council accepted the recommendation of a special chamber of commerce committee, which issued a report last week saying that the mill site area would affect the fewest people out of some 10 lagoon sites. Final engineering plans for an interceptor sewer and the lagoon will now be made.

The council heard objections to putting the lagoon at the mill site from a few residents of that area, but the objections didn’t seem as numerous or adamant as those that came from residents of the Alderbrook area and Bumble Bee Seafoods, when the council originally considered putting the three-cell lagoon facility near 39th and Lief Erikson Drive, west of the mill site.

NAHCOTTA — An estimated 200 persons crowded into the parking area of Northwest Oyster Farms to witness the world’s championship oyster opening contest held Saturday. Some climbed onto the pilings to get a better view of the contestants as they worked fast and furiously at the pile of oysters in front of them, to see how many they could open in the 20-minute competition. Spectators were amazed at the speed and deftness with which the experts pried open the shells and scraped the oyster into a pan, swept the shell into a bin and started on the next one, all in a matter of seconds. Cheers and jeers from the audience reminded the contestants that a $100 prize was at stake.

Minus tides starting this morning and continuing through next Monday are expected to bring razor clam diggers out to Oregon and Washington state beaches “en force,” if weather is favorable for the popular beach sport.

For more than three years Astoria eyes have rolled skyward to watch the antics, the tight formation flying and the breathless speed of Navy fighter, bomber and torpedo planes winging off the Astoria naval air station’s airport on the south shores of Youngs Bay.

But what they don’t know about the airport, which is the nest of these lethal birds of prey, would fill several books, since the field became a major aviation facility strictly as a war-baby, and grew up under strictest wraps of military security.

Not many people know the extent to which women have been given responsibility, in uniform of the Women Accepted for Volunteer Emergency Service, to keep things buzzing at the field. This story is something about what those women are doing.

The nerve center — where landings and take-offs are directed, where weather reports are available, where logs and records of pilots and planes are compiled — is “operations” in the control tower of the naval air station airport. It is a glass-walled room atop the tower where the entire field and its approaches may be scanned. The work room of the control tower is where operators and specialists direct the air traffic of the station. But the operations staff includes not only the specialists, but also yeoman, mechanics, storekeepers, aerologists, radiomen — both men and women.

The latter has been true only eight months, for it was September and Lucille Waska, specialists (Y) third class, who were the first women to take up duty as control tower operators at the Astoria air station. Now operations has women working throughout the tower and even as mechanics.

NAVAL AIR STATION, Astoria — Naval radio station, Astoria, operates today on the site where 30 years ago the first “wireless” stations were on the West Coast.

Four steel towers that reach 300 feet into the air have marked the Youngs Bay horizon since their erection in 1915, the year the station was put into operation.

Constructed primarily to communicate with a similar station in Ketchikan, Alaska, it served as a commercial station until taken over by the Navy on April 10, 1917.

Erection of the four giant towers (one was brought here from Juneau, Alaska, the others built for the station) was an outstanding engineering achievement, the Navy pointed out.

The low, sandy tideland, while an excellent site for communications purposes, did not offer much of a base to support tons of steel nearly 100 feet higher than the deck of the Golden Gate bridge.

The Marconi company’s engineers were satisfied they had the right answer to the problem. Pacific winds that have reached over 100 miles per hour at the site have proven their judgment.

In 30 years of storm and soaking rains only one of the 16 legs supporting the four towers has settled, and that one is down only a few inches.