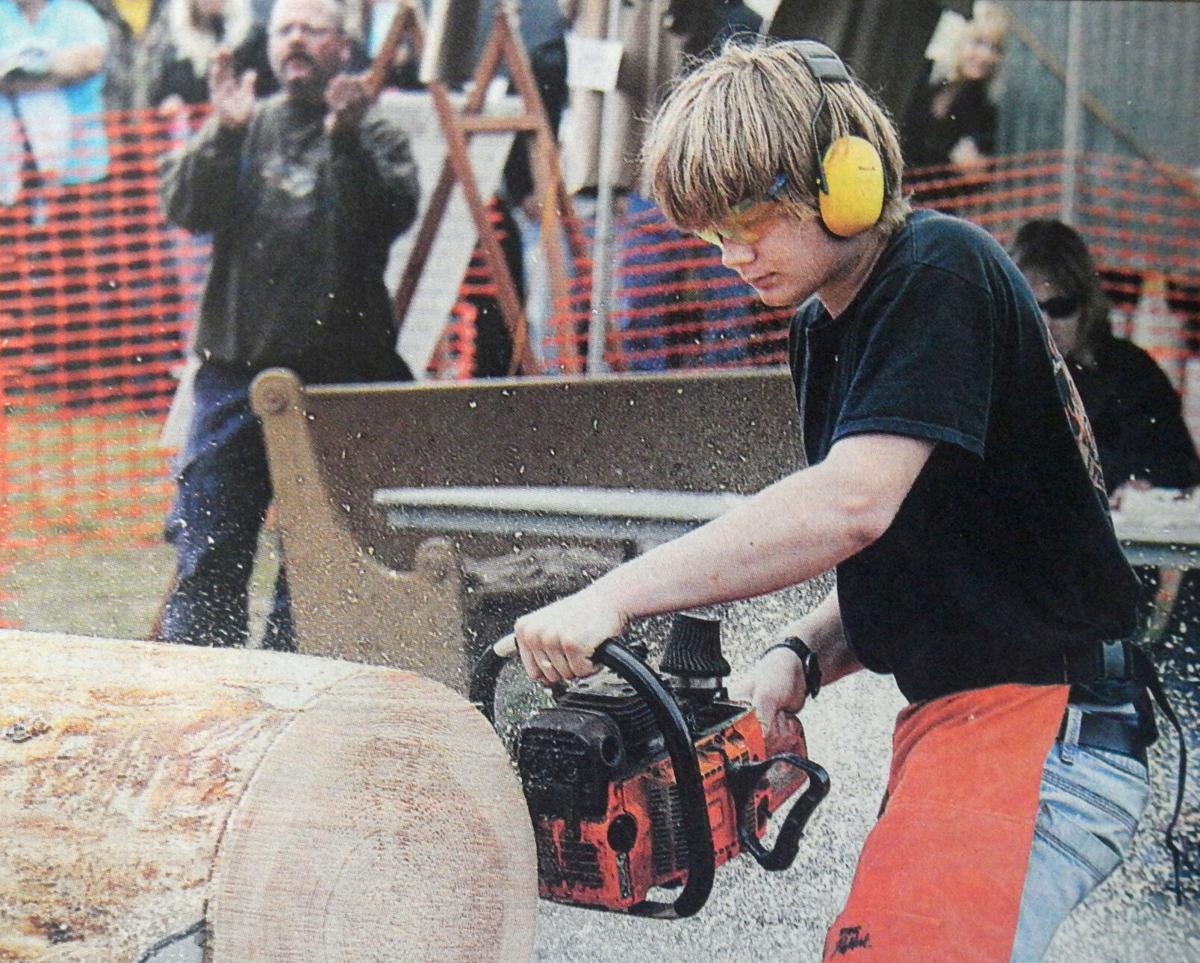 Warren Skirvin, 16, of Clatskanie, competes in a logging event at the Clatsop County Fair in 2010. 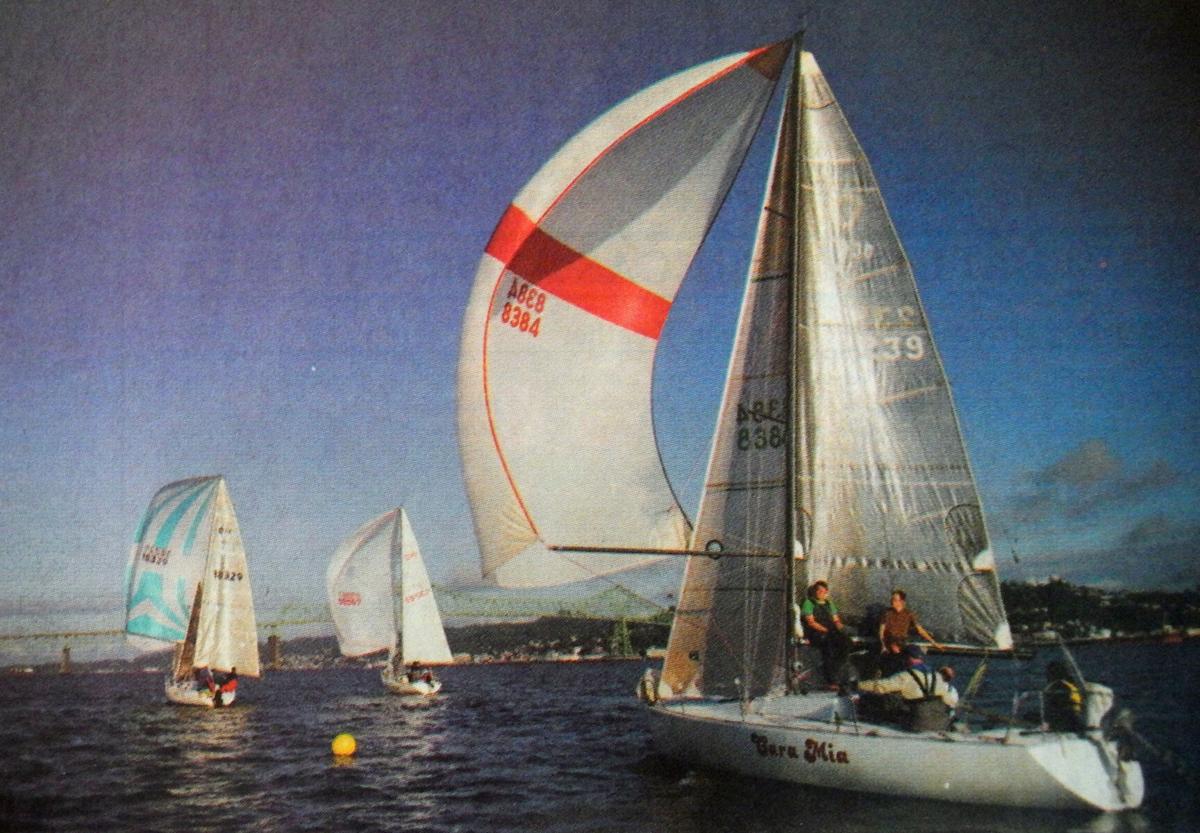 Sailboats compete in a Astoria Regatta boat race in 2010. 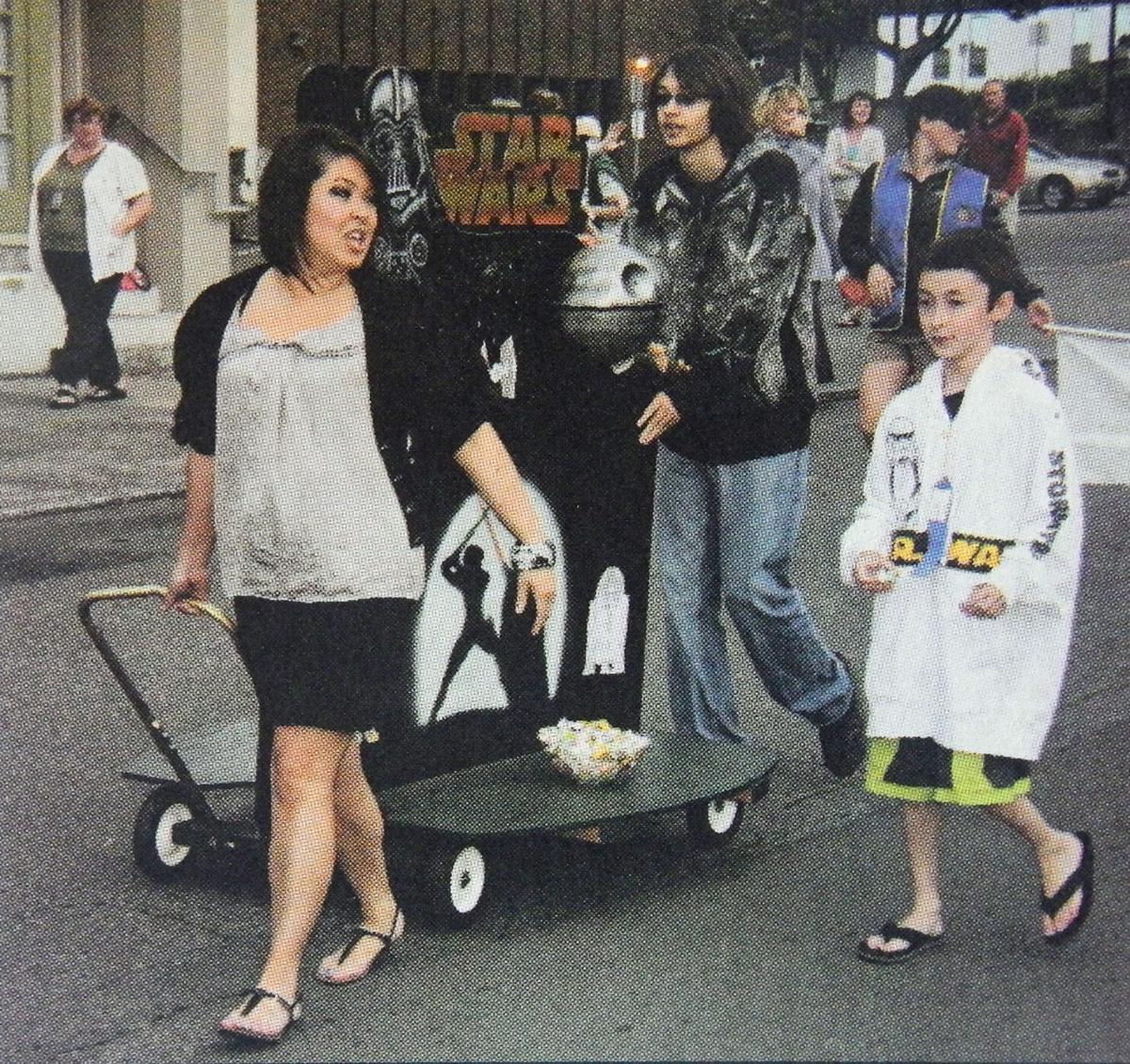 Taylor Huthcinson’s ‘Star Wars’ float won first place for floats in the Astoria Regatta children’s parade in 2010. He is assisted by his mother, Megan Jarrett, and Blake Linehan. 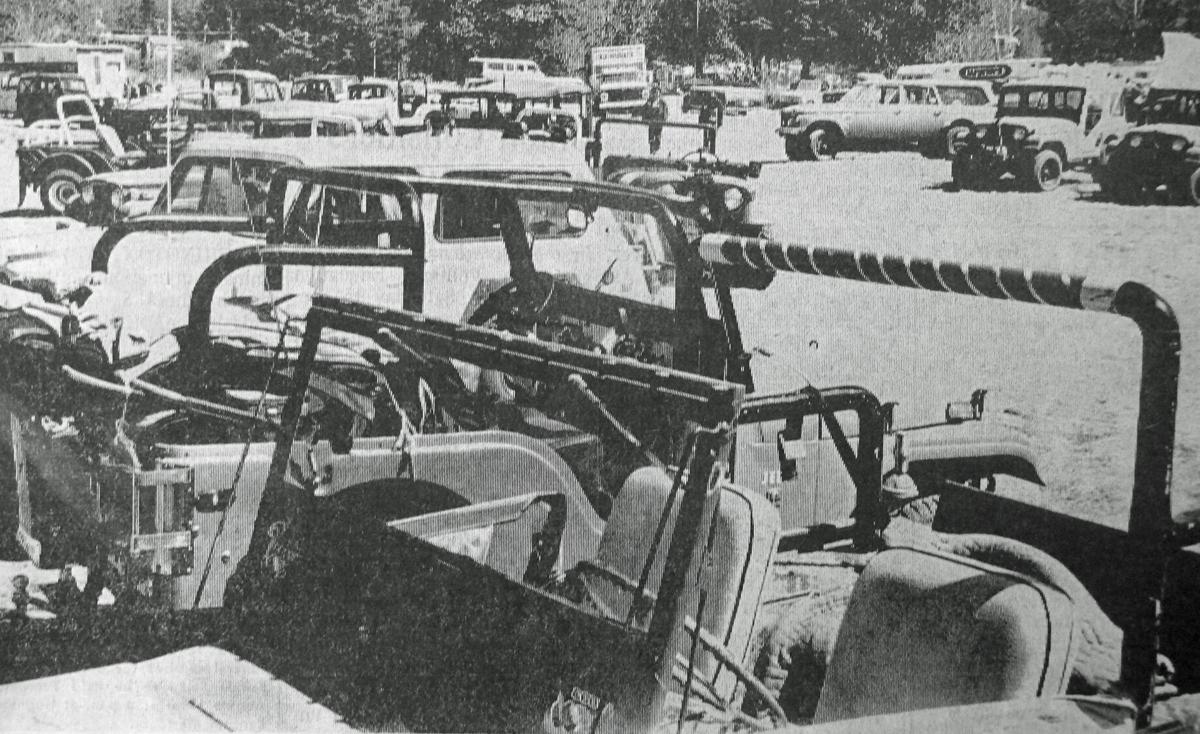 Vehicles at the Pacific Northwest Four-Wheel Drive Association Convention in Seaside in 1970. 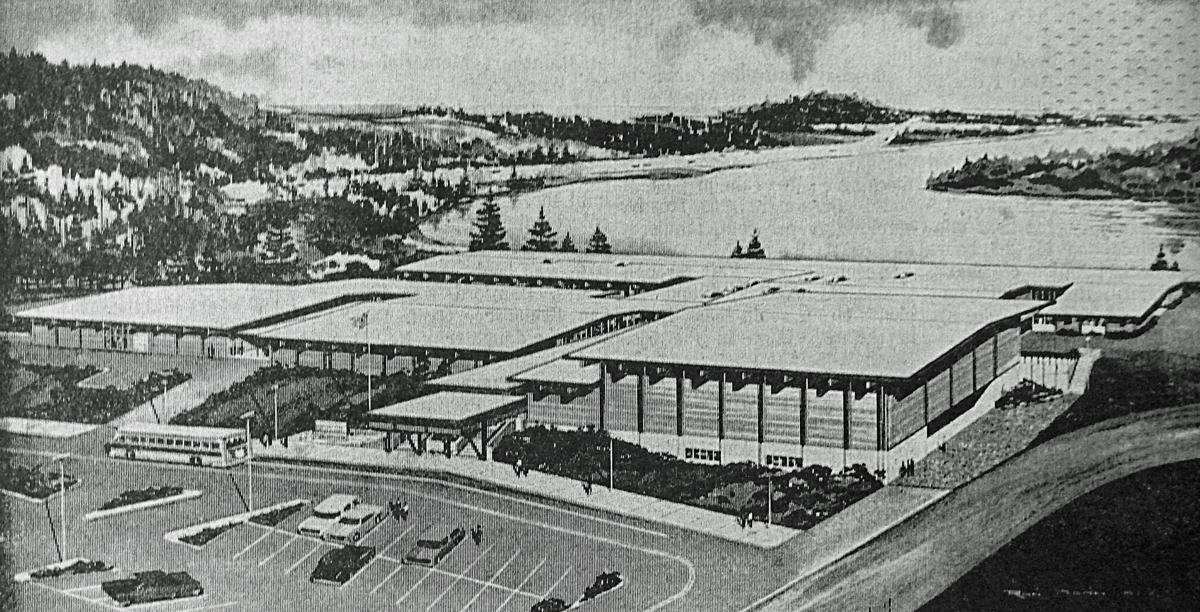 An architect’s drawing of the new junior and senior high school in Ilwaco, Washington, in 1970. 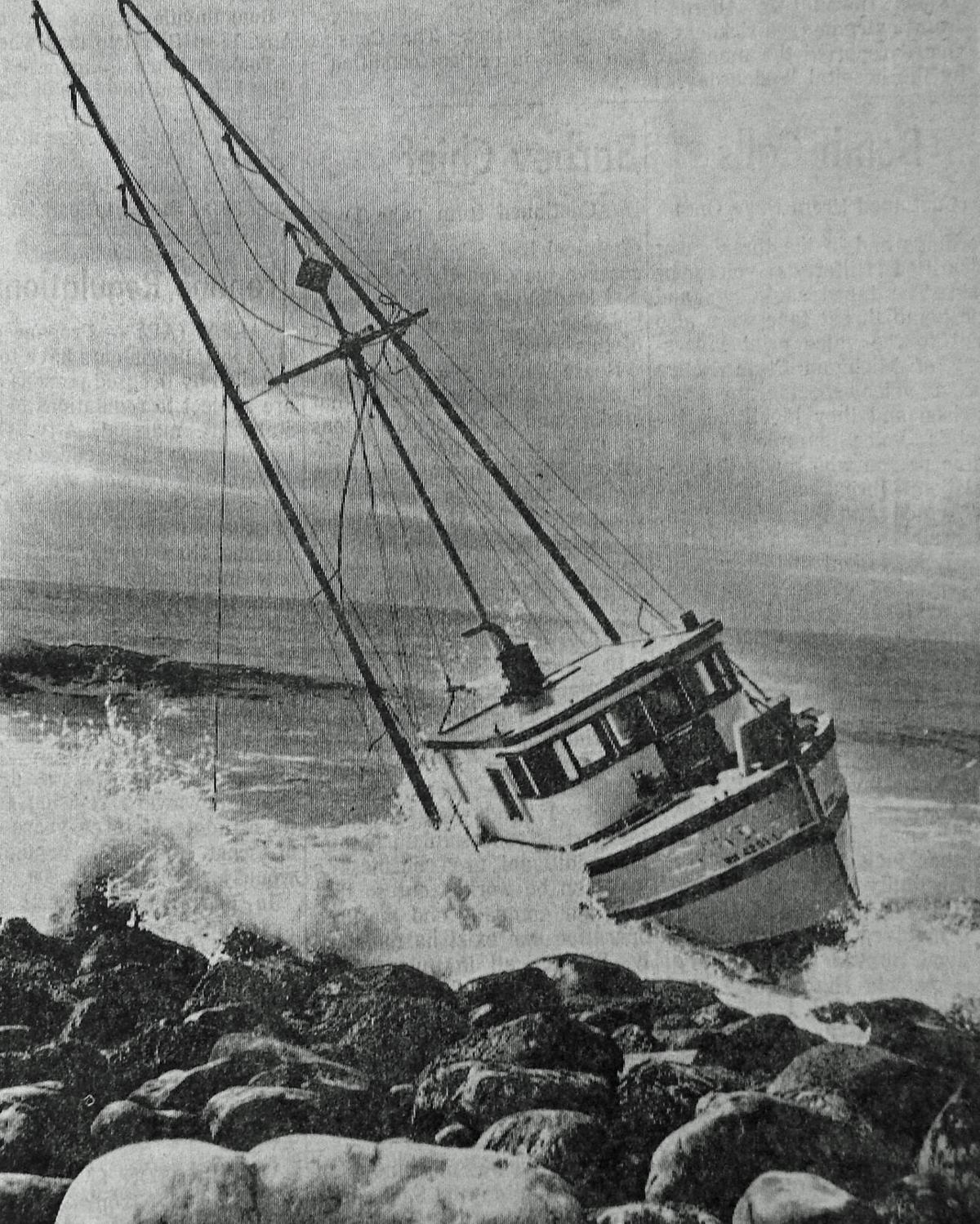 A trawler which wrecked at Tillamook Head in 1970.

Warren Skirvin, 16, of Clatskanie, competes in a logging event at the Clatsop County Fair in 2010.

Sailboats compete in a Astoria Regatta boat race in 2010.

Taylor Huthcinson’s ‘Star Wars’ float won first place for floats in the Astoria Regatta children’s parade in 2010. He is assisted by his mother, Megan Jarrett, and Blake Linehan.

Vehicles at the Pacific Northwest Four-Wheel Drive Association Convention in Seaside in 1970.

An architect’s drawing of the new junior and senior high school in Ilwaco, Washington, in 1970.

A trawler which wrecked at Tillamook Head in 1970.

The 2010 Astoria Regatta is three days into its 116th year and there has already been a queen crowned and a kids’ parade through downtown Astoria. There was also a booming cannon salute in front of the Columbia River Maritime Museum to welcome the U.S. Coast Guard cutter Alert.

But what there hasn’t been a lot of is anything to do with the water. Regatta is a term for a boat race or a series of boat races, so the question is, where have the boat races gone?

The simple answer most people in Regatta and the Astoria Yacht Club give is that the decline in the fishing industry in Astoria has led to a decline in boating races. Whatever the reason, a tradition that started based around maritime races and athletic events has morphed into something different, and there are people who want it back.

“It’s something that needs to be built back up to its glory days,” Astoria Regatta Association Vice President Mike Sorkki said. “This is a water town.”

This year, there are two races scheduled in just one class: sailing. In 1908, the official program listed 32 races in varying classes like rowboats, fishing boats, canoes and even bathtubs.

Eleven years ago, when Matt Samuelson was approached by the Clatsop County Fair Board to have a logging exhibition at the county fair, he didn’t know it would grow into one of the county’s most significant cultural events. Despite some rain Saturday, the Logging Show remained one of the fair’s most popular annual fixtures.

“They wanted something small, but I said, ‘If I can’t do it right, then I don’t want to do it,’” Samuelson said.

So the board let him build up the event the way he envisioned it and with the help of his father, Phillip, his uncle, David, his brother, Jesse, and other volunteers and sponsors, the show has seen 11 healthy years.

In what several people in the audience later called one of the more transparent Port of Astoria meetings they’ve been to, commissioners listened to project updates and asked questions during a work session Tuesday evening.

Log exports and boat scraping were both on the agenda.

The Port has not yet signed a lease with West-East Demolition and Trading LCC, from California, which seeks to sublease property the Port leases at North Tongue Point and use it as a metal scrapping facility.

If a sublease is signed, it would only be for a year, and if the company were to violate any part of its agreement with the Port, the sublease could be terminated, said Jack Crider, executive director of the Port.

The use of approximately 1 acre of land as a metal scrapping facility has been limited to small vessels. The scrapping work itself is only allowed when the boats are on land to minimize the possibility of toxic materials getting into the water.

Uncertainty and ignorance marked the comments of nearly half of the persons queried in Warrenton, the Lewis and Clark area and Astoria Thursday concerning the proposed aluminum plant for Warrenton.

Nearly one-third of those interviewed said they welcomed the industry, indicating it would provide needed employment to the county and increase the tax base in Warrenton. However, more than one-third strongly opposed the aluminum facility, citing air, water and people pollution problems they fear will result.

The Northwest Aluminum Co., which has prepared an area in Warrenton for a site, is now negotiating in New York with other companies about selling most or all of Northwest’s interest in the project.

Most comments seemed to be based on very little information gained from the news media, rumor or hearsay. Few Warrenton or Astoria residents indicated familiarity with aluminum plant processes, employment possibilities or possible pollution problems.

Sponsored by Clatsop County’s Sons of the Beaches four-wheeler club, the convention was the scene of wild, dust-blowing four-wheel drive races, barbecues, dances and fraternizing among member of the 90 clubs attending the convention.

ILWACO — Bids totaling $1.1 million are awarded to three firms for construction of the new junior and senior high school combination for Ocean Beach School District during a regular board meeting Monday night.

An Ilwaco, Washington, man who was washed up on the beach at Tillamook Head when his trawler drifted on the rocks was released from Seaside Hospital Wednesday. He has recovered from the two-day ordeal without food or water. The U.S. Coast Guard reported the wrecked fishing boat of Jonnis Parsons was unsalvageable, according to a report from ground crew which found numerous holes on the starboard side, missing left transom and a warped and twisted keel.

WASHINGTON — President Richard Nixon signed the postal reform bill today. He said the task of overhauling the Post Office was accomplished only through bipartisan support that “showed the system at its best.”

“There is no Republican way or Democratic way to deliver the mail,” Nixon said at signing ceremonies. “There’s only the right way, and that’s what this occasion is all about.”

Herman North, gillnet fisherman, of 2337 Lief Erikson Drive, narrowly escaped injury or drowning about 7:30 p.m. Sunday night when a gas fume explosion on his boat blew him out of the craft and into the river at the foot of 50th Street, near the Columbia River Packers Association net rack installation.

North, according to witnesses of the accident, was just ready to leave for the fishing grounds. As he started his boat motor, a spark from the starter apparently set off the explosion. North was blown clear of the craft and went down in the river for an alarming stay, according to spectators, but finally emerged unscathed with the exception of singed hair and eyebrows.

GUAM — Tokyo said today that American atomic bombs descended on Hiroshima by parachute yesterday, exploded before reaching the ground and caused such great devastation that authorities still have not ascertained its full extent.

Japanese propagandists said that the use of the new weapon was sufficient to brand the enemy for ages to come as the destroyer of “mankind” and public enemy number one of social justice.

Preliminary reports indicated that the second atomic bomb to be dropped on Japan all but obliterated Nagasaki, a major naval base and Japan’s 11th largest city.

Big bait boats bobbed along the Astoria waterfront near the Englund and New England mooring docks today, several of the craft making appearance of more new boats to the swelling total of the Astoria offshore fleet.

Most of the Astoria albacore fleet was at sea today, excepting those bait boats and larger craft still in port preparing for strictly bait fishing, which has historically been the best after Aug. 20.

The 42-foot fishing boat Harmony, with two men aboard, was run down in pea soup fog 47 miles southwest of the lightship at 6 a.m. Thursday, foundered when its bow stem was torn away and was towed into the river by the U.S. Coast Guard boat Triumph, it was learned today from the Point Adams Coast Guard Station.

Sigurd O. Sommersell and Hjalmer Oen, the former skipper aboard the Harmony, were unhurt, although they were forced to take to a small boat after the steamer hit the craft.

The monthlong bout with flames in Oregon’s timber areas was improving today with reports that most major fires were under control.