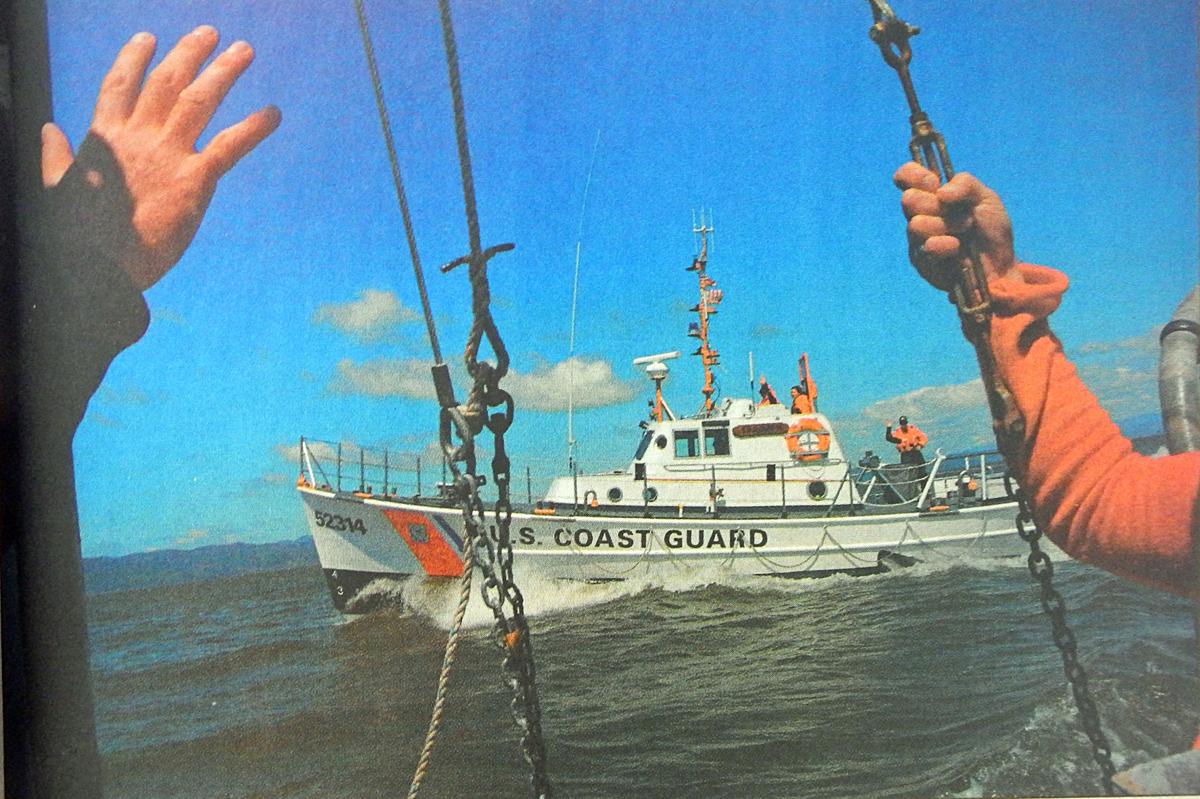 2009 — Garth Porteur waves to the Coast Guard as his passenger, Shannon Meeker, holds on over choppy seas during the Blessing of the Fleet ceremony on the Columbia River. Porteur came out in his 1939-built vessel to honor and represent old-time fishermen. 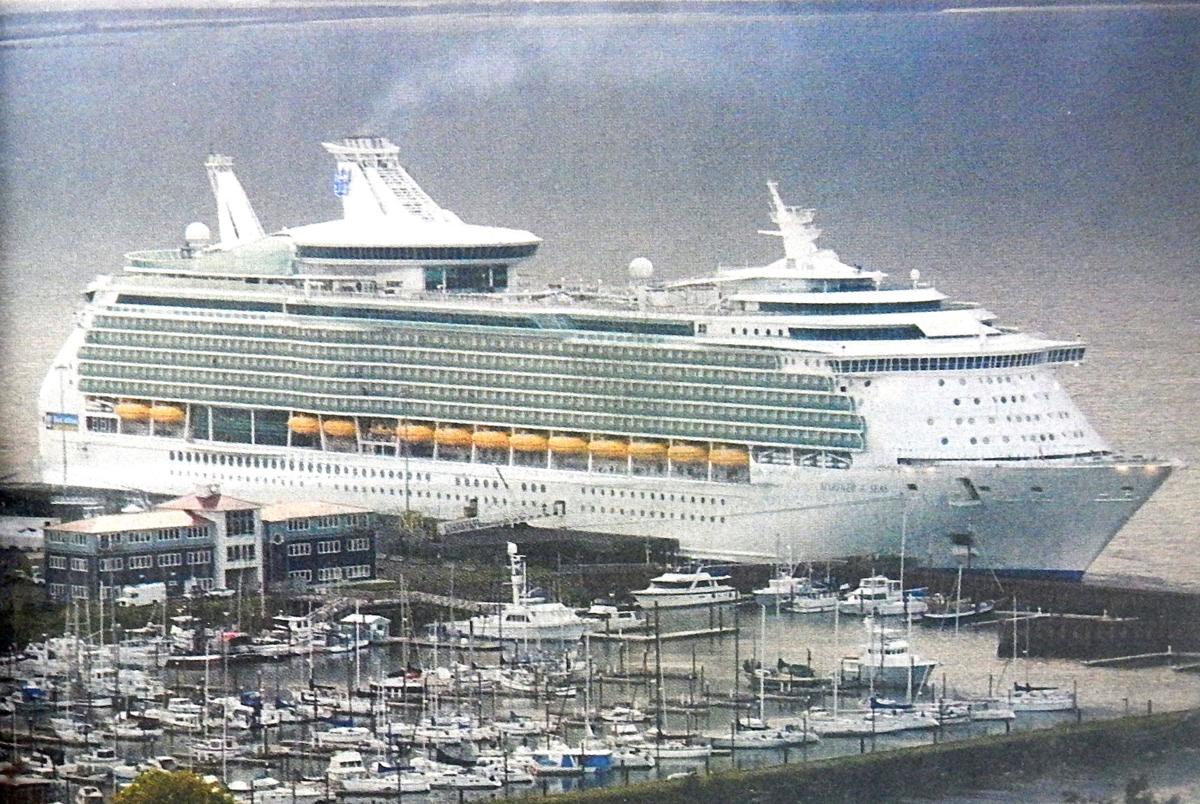 2009 — The 1,020-foot Mariner of the Seas, part of the Royal Caribbean International cruise fleet, brought more than 3,000 passengers to Astoria. 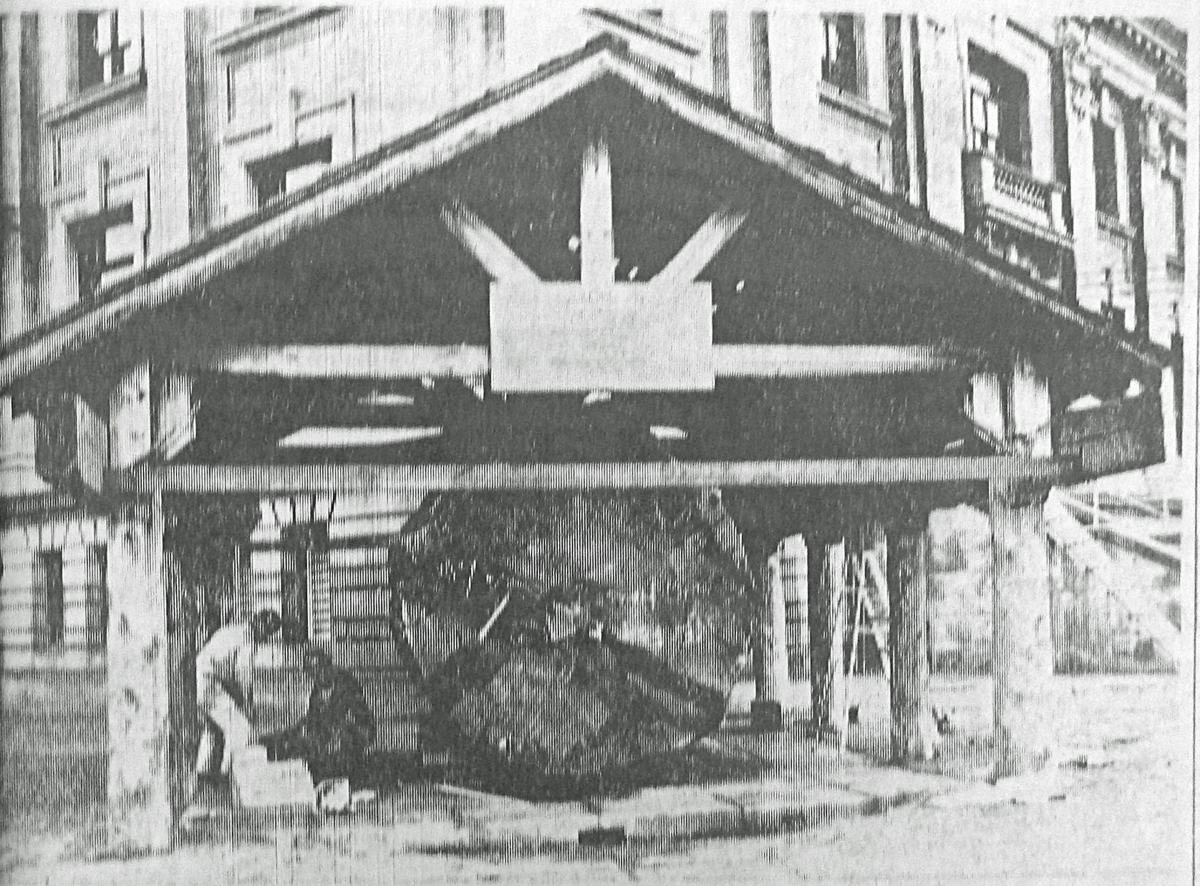 1969 — A new section of Douglas fir is now in place at the Clatsop County Courthouse for display. Workmen had to remove the roof of the shed to place it. The previous log had to be removed because it was deteriorating with age — it was 624 years old when cut — and had become a safety hazard.

2009 — Garth Porteur waves to the Coast Guard as his passenger, Shannon Meeker, holds on over choppy seas during the Blessing of the Fleet ceremony on the Columbia River. Porteur came out in his 1939-built vessel to honor and represent old-time fishermen.

2009 — The 1,020-foot Mariner of the Seas, part of the Royal Caribbean International cruise fleet, brought more than 3,000 passengers to Astoria.

1969 — A new section of Douglas fir is now in place at the Clatsop County Courthouse for display. Workmen had to remove the roof of the shed to place it. The previous log had to be removed because it was deteriorating with age — it was 624 years old when cut — and had become a safety hazard.

The sun was shining and yet the sea was anything but calm.

A half-dozen vessels braved choppy waters to participate in this year’s Blessing of the Fleet.

Frank Gillock, chaplain to Coast Guard Auxiliary Flotilla 62, presided over the ceremony. He read from Psalm 23 — “The Sailor’s Psalm” — blessed the fleet, and wished everyone a bountiful season, before wreaths and flowers were thrown into the waves in honor of those who have perished at sea.

The annual event is organized and sponsored by the Astoria Yacht Club.

Twenty years of exposure to saltwater has worn away the pea-green paint on the Astoria Bridge, allowing rust to start gnawing on its steel beams.

Painting the four-mile bridge is a major undertaking. It’s estimated to cost $20 million — $10 million from each state — and take 2½ years to complete.

The bridge was built in 1966 linking Astoria and Megler, Washington, and was last painted in 1989 (with a touch-up job in 1994). Oregon Department of Transportation crews inspect the bridge every two years to check for deterioration.

With the weather perking up, people are starting on their lawn work and burning debris piles.

The Coast Guard had a busy weekend on the North Coast, rescuing and assisting a surfer, a fisherman and a pleasure boater.

The bridge is the only link to more than 40 households on the hillside above it.

The reason for the increase in cost, as usual for Astoria, is earth movement.

A rejected offer and a strike called, involving unrelated unions, have added to the employment woes of Clatsop County.

Members of Amalgamated Meat Cutters and Butchers Workmen of North America Local P-554 voted Wednesday night to reject an offer made by their employers, the fish canneries and packers of frozen fish and fish products, according to Bud Simonson, assistant district director for another district, filling in for Charles Mentrin.

The strike at Crown Zellerbach’s Wauna plant is over, according to a company spokesman, who said work resumed late Sunday afternoon. The plant was closed April 22, after members of two unions voted to strike.

The new Finnish consul general for the western United States has a name honored highly in Finland.

Klaus Snellman, in Astoria for a short visit, is the great-grandson of J.W. Snellman, father of Finland’s monetary system and a philosopher and statesman.

Klaus Snellman, a 45-year-old diplomat of direct manner, was interviewed before going to Suomi Hall Monday night for a brief talk.

Mrs. Burns told The Daily Astorian by phone Tuesday afternoon she spoke against closure of several of the centers advocated by the Nixon administration.

The director said she also conferred with an official in the Manpower Administration of the Department of Labor and was told that no plans exist for further closings of centers. The center at Tillamook is on the closure list, but Tongue Point, with some 780 girls, is not.

The state of Oregon’s official position is that it will have to import water to solve a water shortage that will develop in the next 100 years.

Oregon is telling California and Arizona that they should quit looking to the Northwest for surplus water because there isn’t any.

A potentially dangerous fire hazard will develop along the entire Clatsop Plains area from Warrenton to Gearhart due to a “supply and demand” factor, the Clatsop County commission was told Wednesday.

Giving this grave assessment was Elo Kauttu, fire chief of the Lewis and Clark community. He told commissioners he voiced the apprehension of the rural fire district people.

Kauttu said rural fire chiefs met recently and discussed the ramifications that will be brought about by the skyrocketing housing developments in the Gearhart area. There is a demand for housing and the developers must have a supply of water, he said.

The Oregon Fish Commission and the Washington Department of Fisheries accepted dates recommended by their staff biologists at a meeting Thursday.

The action was opposed by the Idaho Department of Game and Fish.

The lead held by the Clatsop County Republican Party over the Democrats in April 1942 decreased markedly in this year’s registration, according to the count released today by Verne Stratton, county clerk. The total number of registered voters in the county has increased by 116 over 1942, with 12,761 citizens registering.

In 1942, the Republican Party led the Democratic by 1,300 voters. This year the lead diminished to 885. Democratic registration gained 268 voters this year, while Republican dropped 147.

After a more complete view of early returns in the 20-day commercial salmon season that opened Sunday night, fishing industry spokesmen today concluded that returns are far, far below “normal” and yet are certainly sufficient to operate canneries.

All of the salmon taken during the recent winter season went onto the fresh market. Returns of the 10-day period, which coincided with Lent, were not such as to glut the fresh markets.

However, the higher quality May fish is going into cans, even though receipts are low. The entire spring catch in 1943 was 600,000 pounds below that of 1942, following an unbroken decline for this period of fishing.

At least 1,000 civilians, but only if they are specific and special guests of Navy officers and men, will see the big Jack Benny show in the USO pavilion Wednesday night, it was announced this week.

Never, since he has known it, has Astoria presented such a sound basic economy or faced a brighter future, Harold Wl Derry, manager of the new industries department of the Pacific Power & Light company, told the Chamber of Commerce board at its weekly luncheon.

Derry, who has made many visits here during the past few years, feels that the offshore fishery is still capable of great expansion and set as a precedent for such development adequate mooring facilities here for the fishing fleet.

A real full-blooded native from “America’s Last Frontier” is Pvt. Dan Nassuk, 31, who is the first Eskimo soldier to serve at Fort Stevens, it was announced today by Col C.S. Doney, commanding officer.

Private Nassuk is a native of Koyuk, Alaska, which is approximately 150 miles northeast of Nome. Koyuk is a village of only 100 inhabitants and seven men were taken from this village into the Army.

Right now, at Fort Stevens, Private Nassuk is 2,600 miles from his home. He says (believe it or not) that he and other natives of his village, in the frozen waste of northern Alaska, are very fond of ice cream and eat it often.