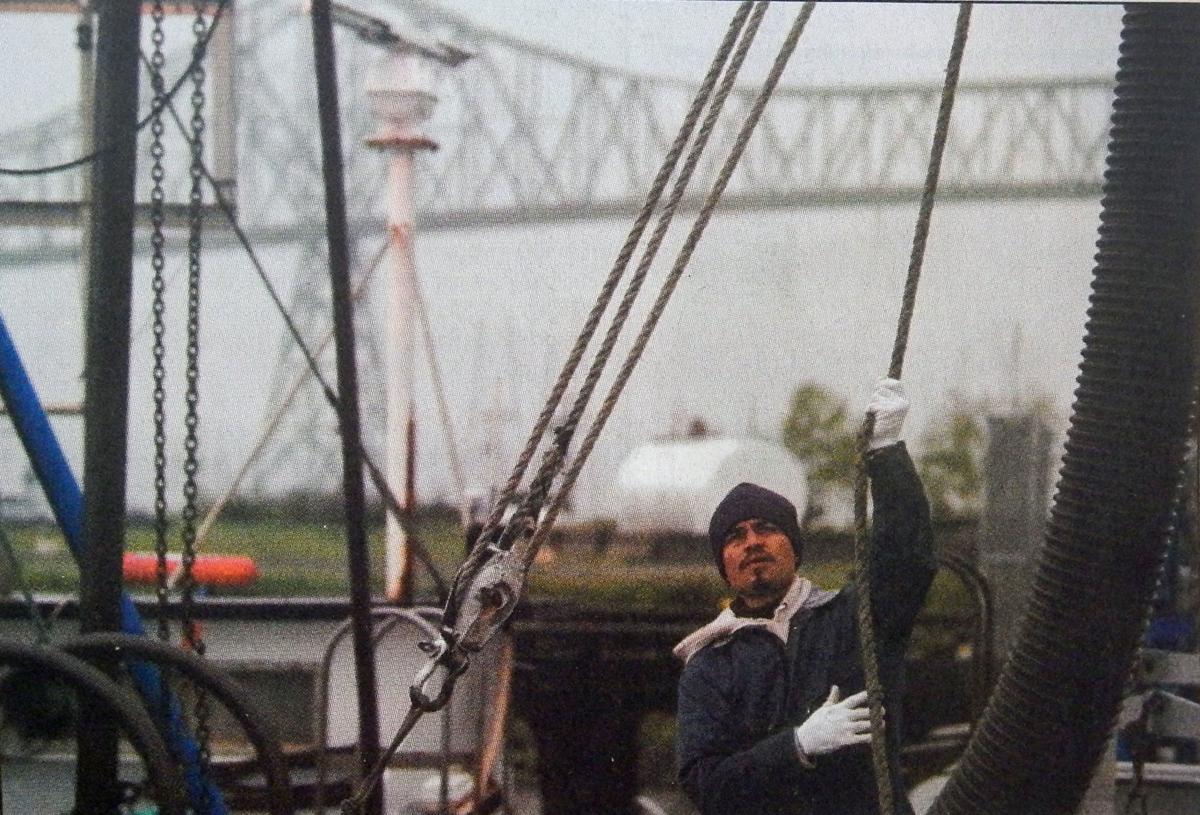 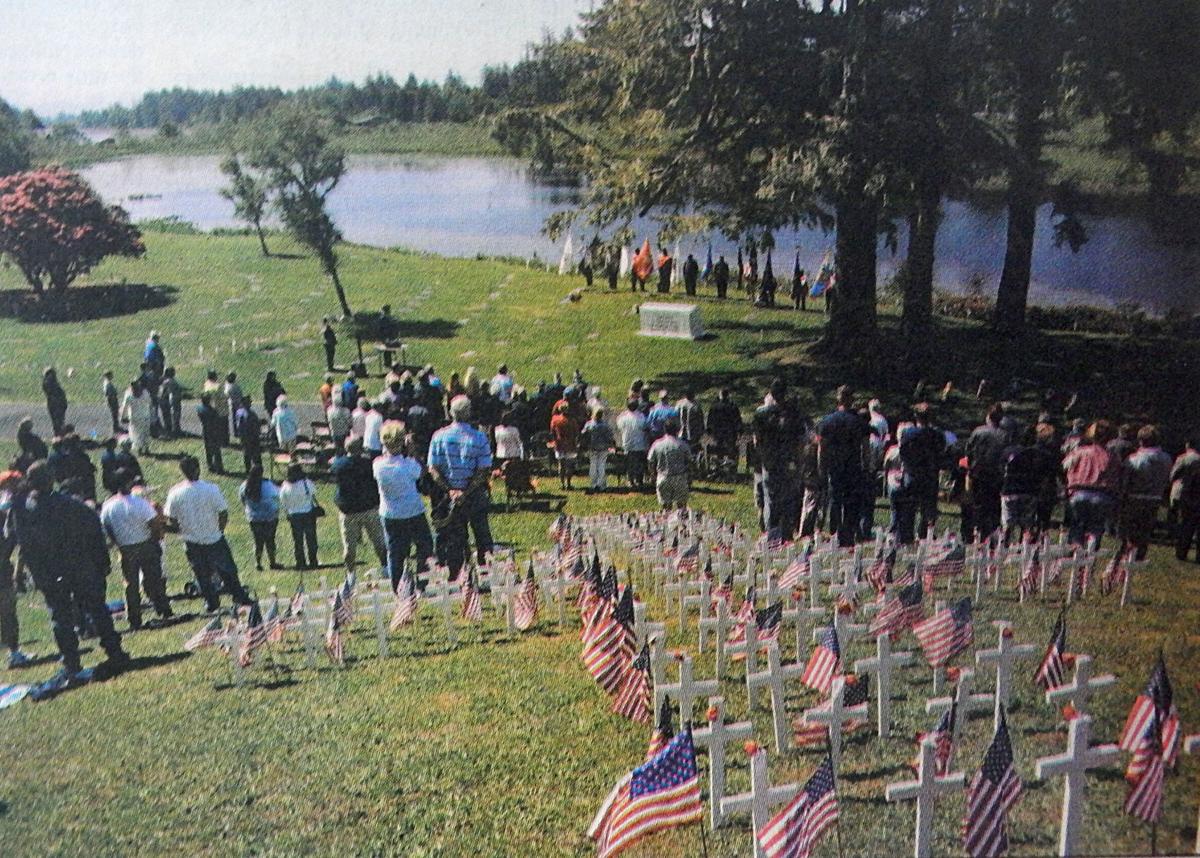 2009 — More than 100 people gathered around the base of “the Knob” at Ocean View Cemetery in Warrenton to observe Memorial Day. Roads through the cemetery had been lined with flags and crosses similar to those that were staked out to form a large cross on the knob. 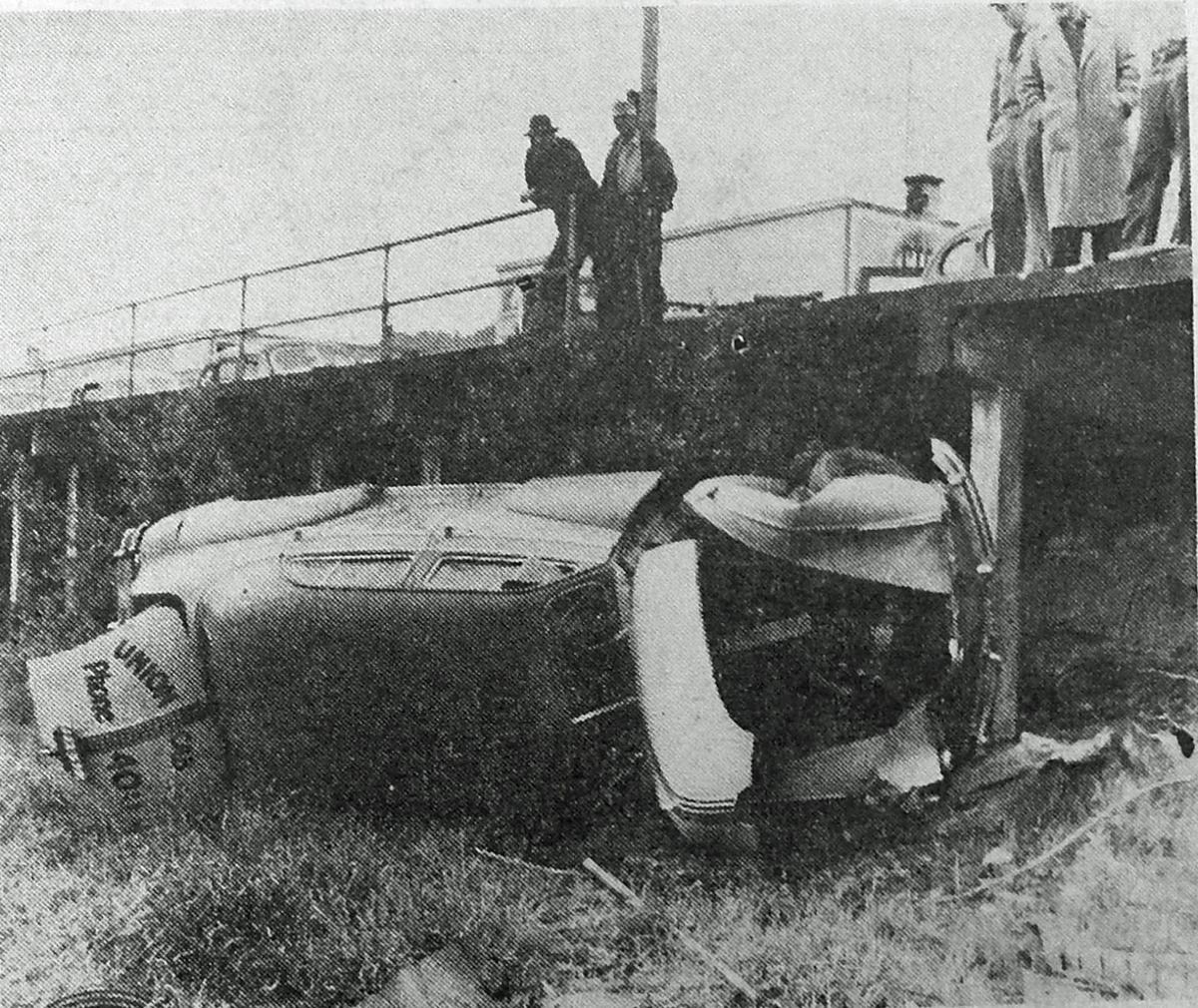 1944 — Roland Belanger, driver of this wrecked taxi, escaped without a scratch when the machine went out of control as he was driving along Bond Street. 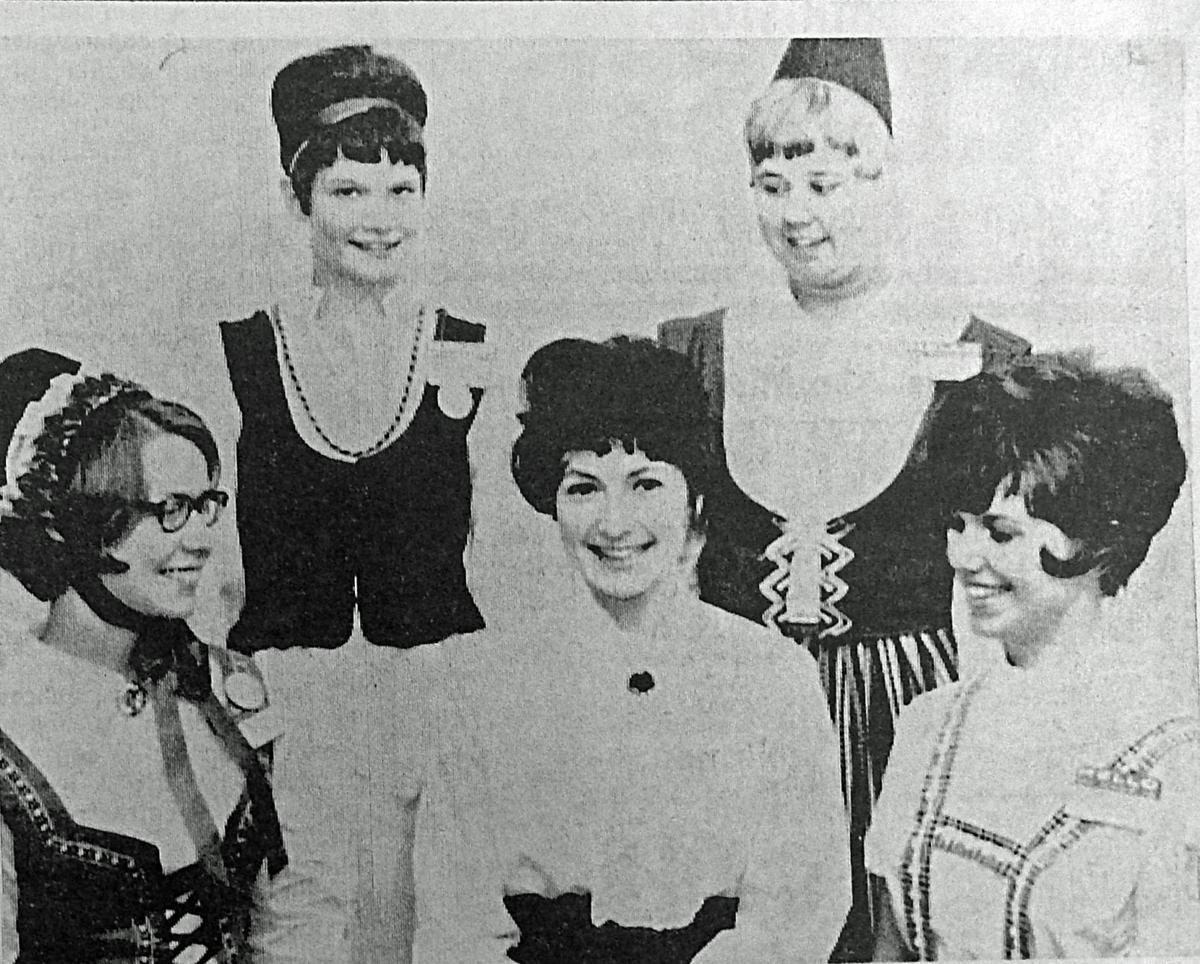 1969 – Contestants for the title of Miss Scandinavia in the Scandinavian Midsummer Festival in Astoria gathered in costume, along with last year’s Miss Scandinavia, Marjie Yost, seated at center. Each is of Scandinavian ancestry — left to right, Martha Rasmussen (Danish), Aini Mattila (Finnish), Arleen Swanson of Longview (Swedish) and Carol Johansen (Norwegian). 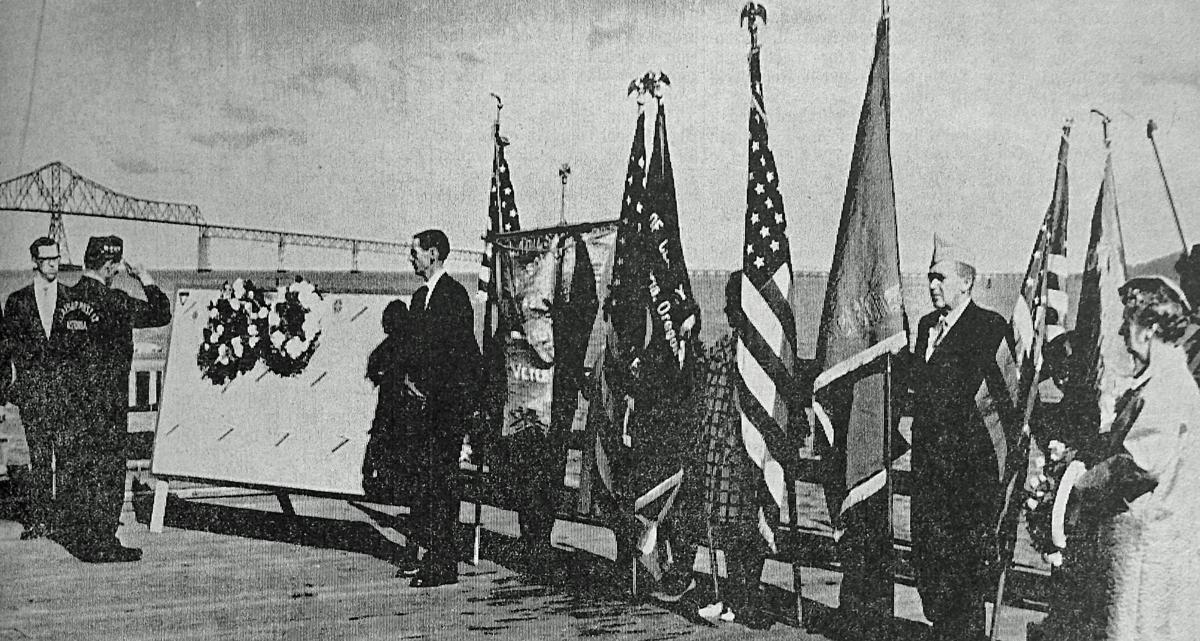 2009 — More than 100 people gathered around the base of “the Knob” at Ocean View Cemetery in Warrenton to observe Memorial Day. Roads through the cemetery had been lined with flags and crosses similar to those that were staked out to form a large cross on the knob.

1944 — Roland Belanger, driver of this wrecked taxi, escaped without a scratch when the machine went out of control as he was driving along Bond Street.

1969 – Contestants for the title of Miss Scandinavia in the Scandinavian Midsummer Festival in Astoria gathered in costume, along with last year’s Miss Scandinavia, Marjie Yost, seated at center. Each is of Scandinavian ancestry — left to right, Martha Rasmussen (Danish), Aini Mattila (Finnish), Arleen Swanson of Longview (Swedish) and Carol Johansen (Norwegian).

Seafood processing is full of tough jobs, many of which are cold, slimy, repetitious — and even dangerous, for those wielding fillet knives.

Some tasks, such as extracting the cooked meat from Dungeness crab legs, are just plain tedious. But they need to be done fast to preserve the product and get it to the market quickly.

At Bornstein Seafoods, many of those workers are Hispanic. They have migrated to the North Coast for the high-paying jobs, which can yield $15 to $20 per hour.

Plant manager Anne Espedal said about 90 percent of the workforce at Bornstein’s is Hispanic.

CHINOOK, Wash. — Ray Gardner, chairman of the Chinook Tribe, is heading to Washington, D.C., this week to ramp up the battle for federal recognition.

His trip follows the effort announced last week by U.S. Rep. Brian Baird to introduce legislation to bring the long-awaited recognition to reality.

Gardner was among those honored this weekend at the unveiling of an alto relief bronze sculpture at Dismal Nitch commemorating the days the Lewis and Clark expedition, trapped by storms and rolling logs, near starving, watched Chinook canoes traveling easily past them on the raging river.

Those attending the event had no illusions that without the Chinook, Lewis and Clark and their party would not have survived.

Clatsop County’s unemployment rate rose slightly from 9.9 percent in March to 10.3 percent in April — a welcome plateau after several months of significant increases.

The rate was still higher than the national employment rate of 8.9 percent, and more than twice what it was last April, but it was below the statewide rate of 12 percent. Columbia County’s unemployment rate rose to 15.4 percent in April, a significant increase from from the previous month’s 14.1 percent.

Fifty-eight graduating seniors at Astoria High School “hit pay dirt” Friday at the annual awards assembly in the school auditorium, when their names were read as recipients of awards and scholarships

The Astoria Coast Guard Air Station and Cape Disappointment Motor Lifeboat Station were each involved in a rescue mission over the weekend, according to a spokesman at the Air Station.

The freighter Rosaria, on its way upriver, collided with a 20-foot pleasure craft just inside the mouth of the Columbia, the Coast Guard said, and the small boat sank within three minutes. However, the accident occurred very near the channel used by Cape Disappointment lifeboats, and one arrived on the scene quickly, piloted by Coxswain Howard W. Smith, BM2.

SPACE CENTER, Houston — The Apollo 10 astronauts returned home today to a hero’s welcome and to make the reports that will determine when man will go to the moon this year.

The executive vice president of the Northwest Aluminum Co. met Tuesday in Astoria with members of the Astoria Port Commission and Manager C.E. Hodges on who will build dock facilities for Northwest at Warrenton.

The city of Astoria and Astoria city firemen appeared headed for conflict today over their first pay negotiation session since a court ruling last week that the city must bargain further with the firemen.

Ralph F. Harder, well-known Lewis and Clark dairyman, had a narrow escape from serious injury or death when his car was hit by an SP&S switch engine at the foot of Ninth Street.

In all likelihood there will be new tires for everybody next year, and “B” gasoline rations may possibly be increased in the East and Midwest sometime after July 1 of this year, it was learned today.

It was also expected that rationing of new synthetic rubber tires to “A” motorists would get underway during the last three months of 1944.

Immediate construction work on building to house a new marine supply store, and for the installation of equipment for the distribution of petroleum products on waterfront property recently acquired at the foot of 15th Street, were announced today by Axel Englund.

For nearly 20 years Englund, a member of the city commission, has been identified with the Beebe company here. For six years he has been manager of the local marine company store, a position he is resigning June 17. Englund has made his home in Astoria for 30 years.

Grocery baskets will carry “reasonably plentiful” amounts of meat but less poultry, canned vegetables, butter and lard during the last half of 1944, the office of war information predicted today in a report on the food outlook.

The Northwest logging and sawmill walkouts, in protest to a WLB denial of minimum wage increases, spread to Clatsop County woods today, as CIO loggers left jobs in sympathetic action with mill workers, who left all of Clatsop County’s sawmills this week.

Reportedly affected were the truck operations of Van Vleet, Hollenbeck, Lerbvack and Gray and the big Crown Willamette camp at Seaside. Others were said to be closing down.

Last year’s prohibition of public sale and use of fireworks, pyrotechnics or other forms of combustible explosives will continue in force this year, with the exception of controlled fireworks displays which will be lawful when approved in writing by the ninth regional civilian defense board, it has been announced by Governor Earl Snell.