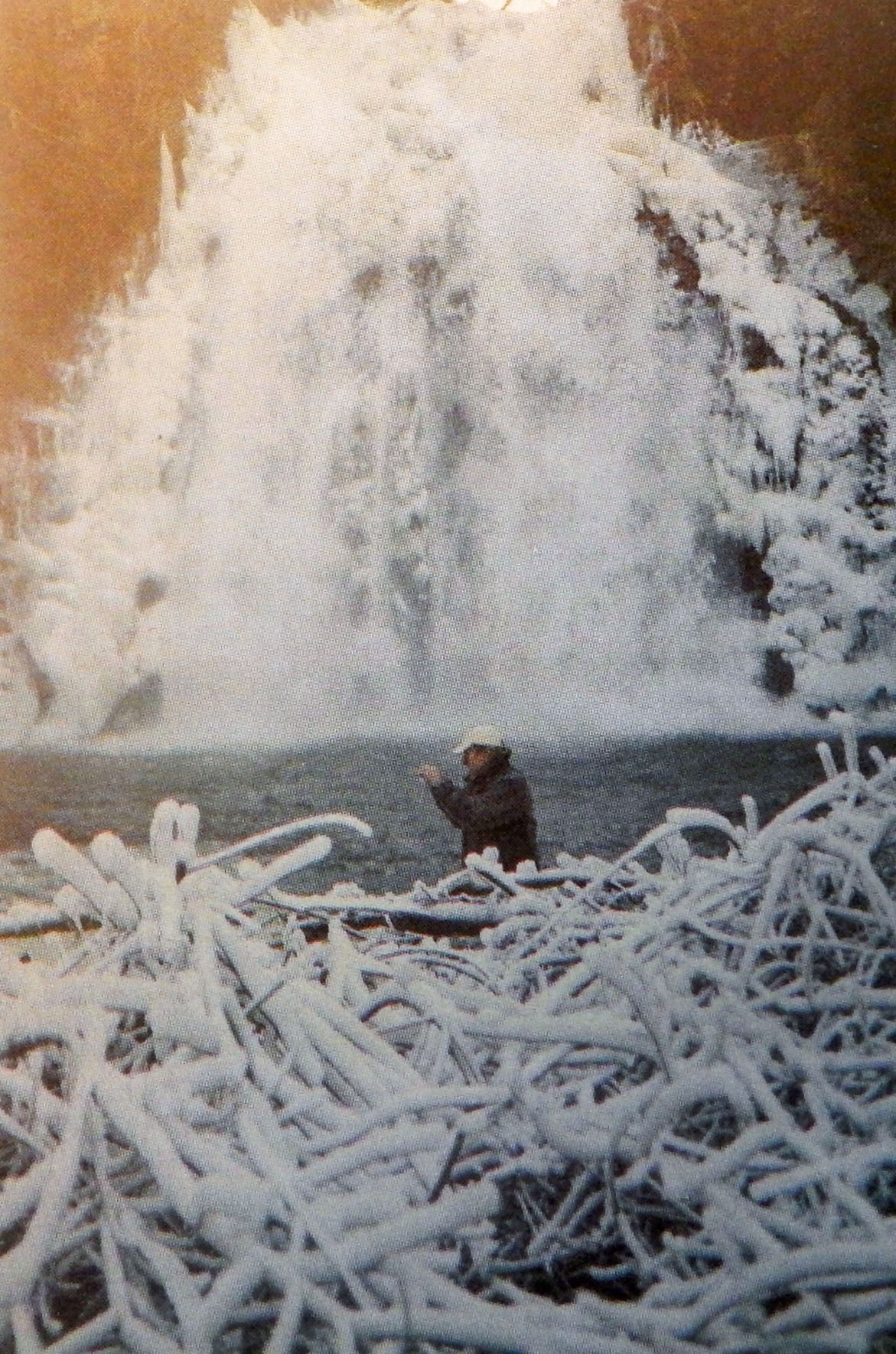 Francis Schneyder snaps a photo of an ice formation at the base of Youngs River Falls in 2009. Spray from the falls combined with the freezing weather coated plants with ice. 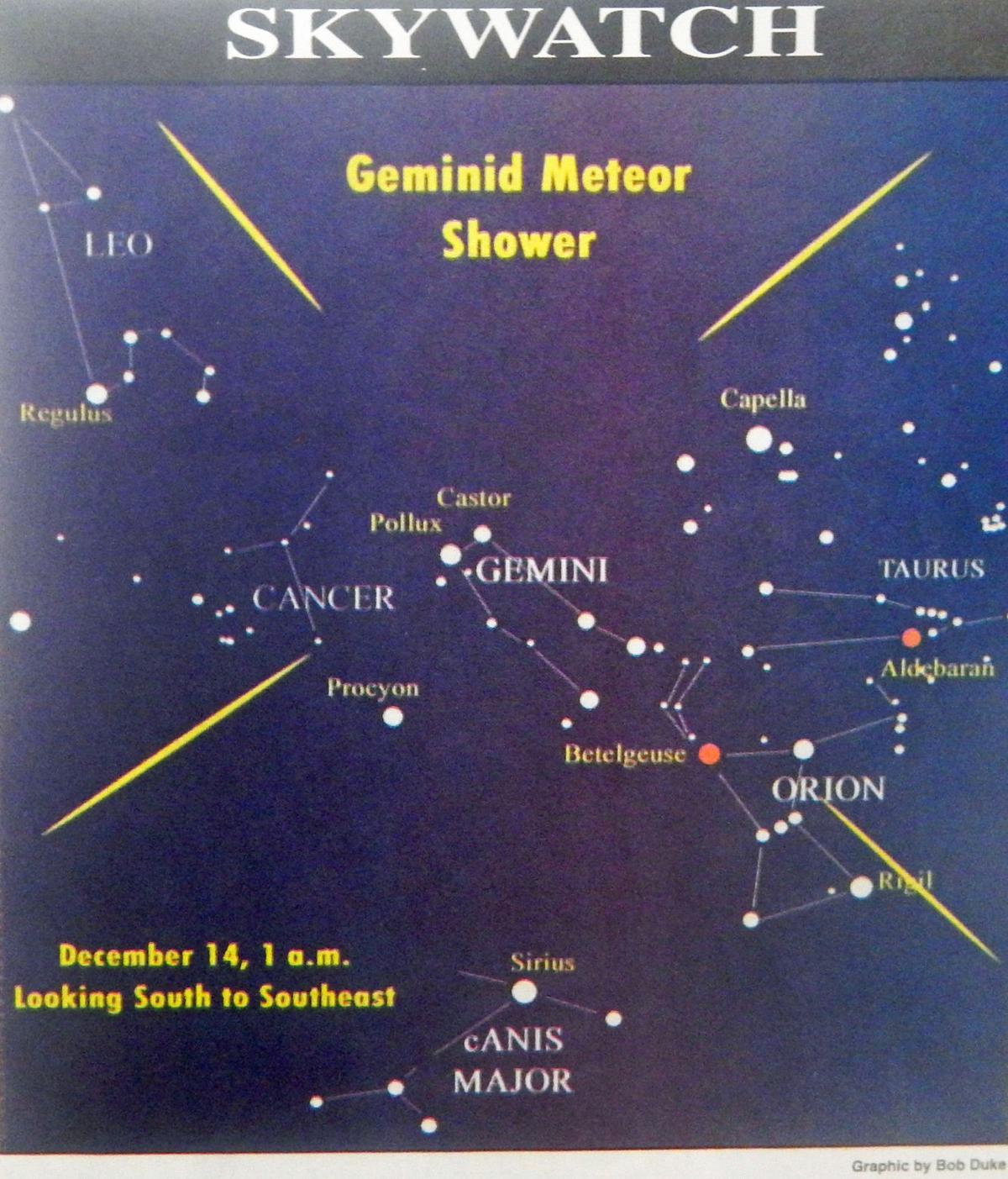 The constellations of winter and Geminid meteor shower in 2009. 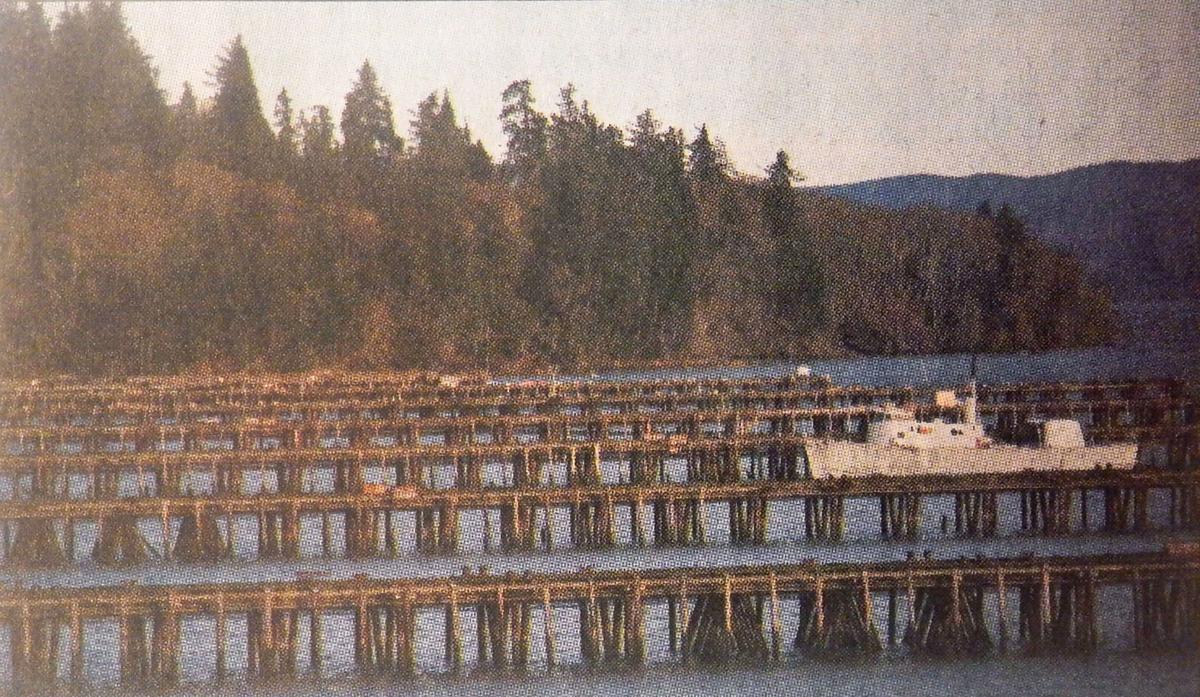 A single ship is docked along one of the five finger piers that extend from the North Tongue Point property in 2009. 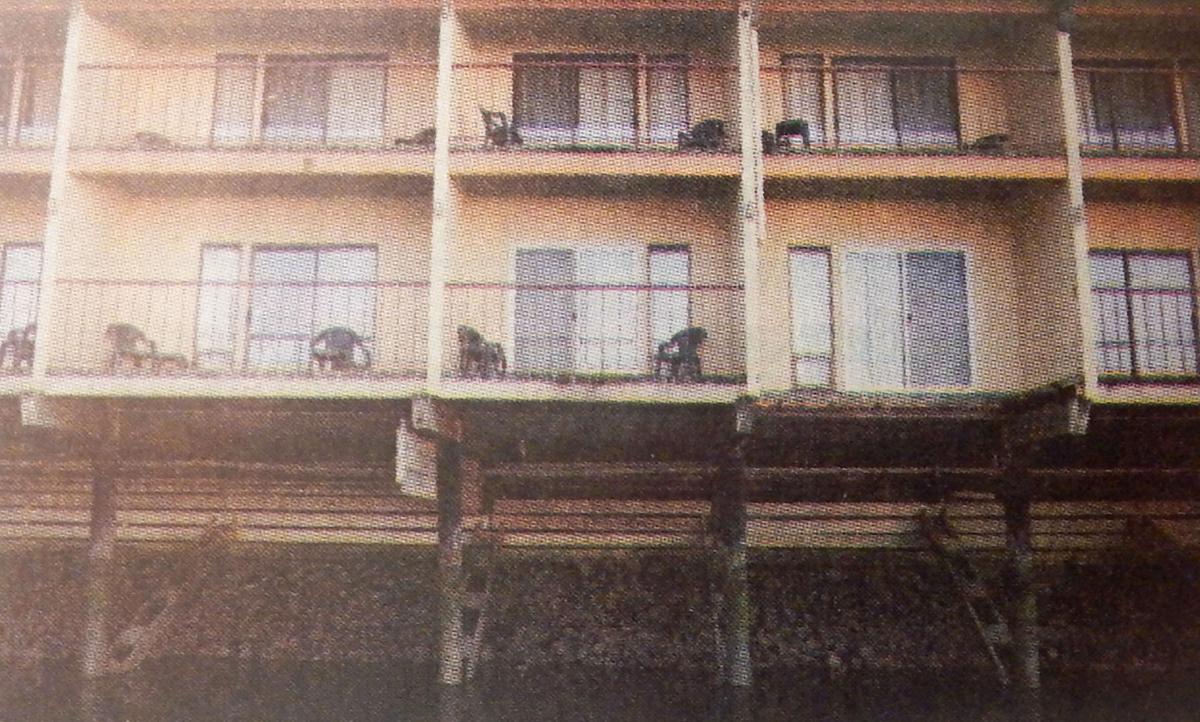 The collapsed deck, bottom right, outside of one of the rooms at Astoria’s Red Lion Inn, led to closure of the building after further inspection of its structural integrity in 2009.

The Golden Key catamaran in 1969, ready to carry adventurers to Honduras. 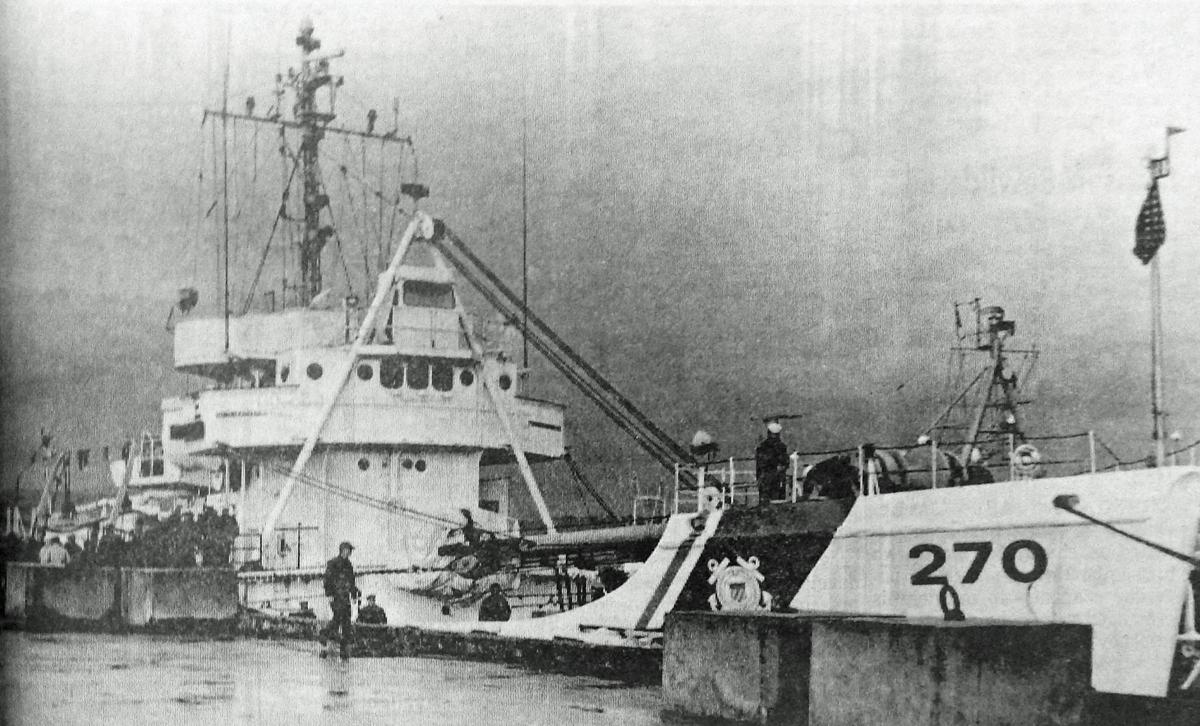 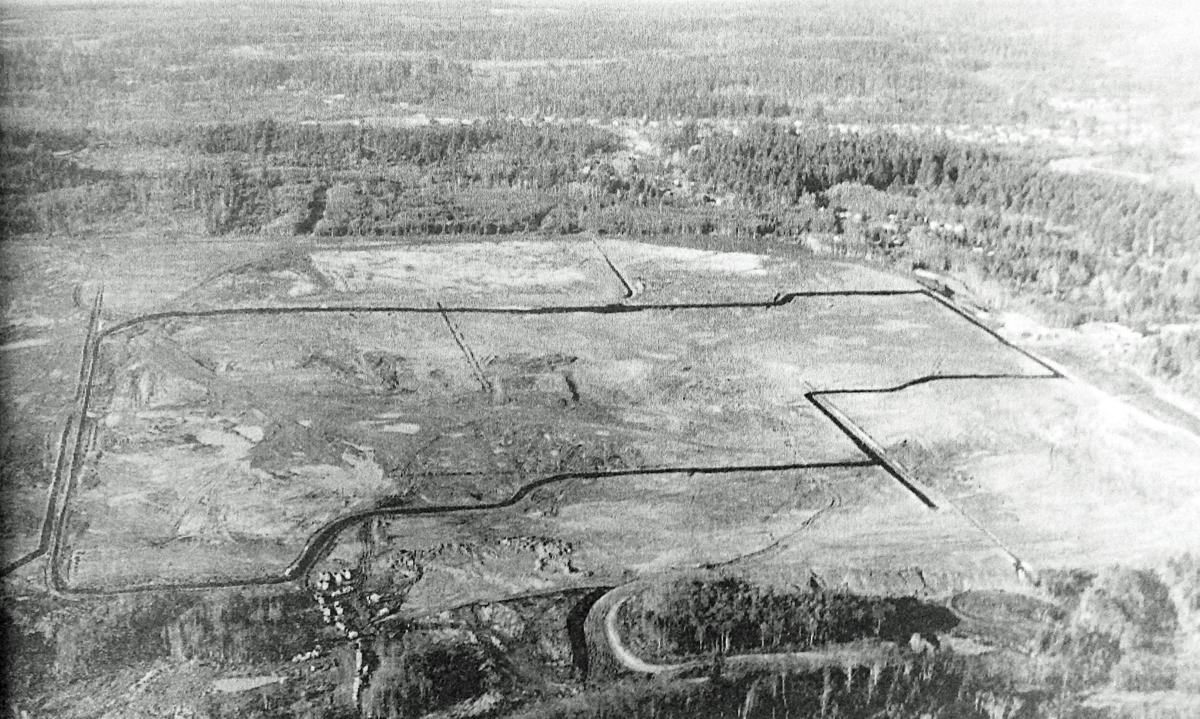 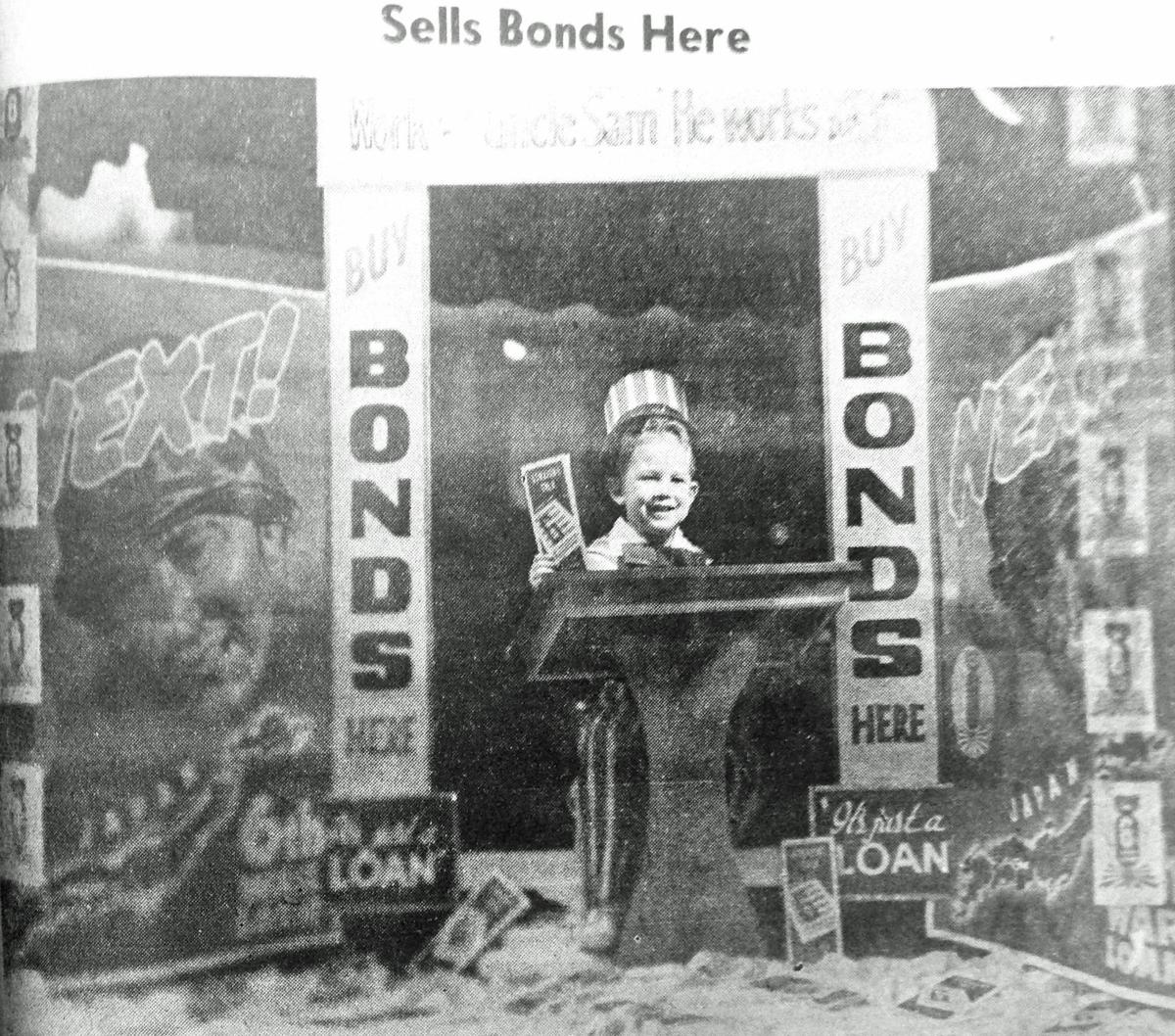 A highlight of the sixth war loan drive in Astoria was the personal salesmanship of 3 1/2 year-old Phillip Marcus Steinbock, pictured, in 1944. The little boy is shown in the war bond setting which decorated the window of Jo-Vels shoe store which his father managed.

Francis Schneyder snaps a photo of an ice formation at the base of Youngs River Falls in 2009. Spray from the falls combined with the freezing weather coated plants with ice.

The constellations of winter and Geminid meteor shower in 2009.

A single ship is docked along one of the five finger piers that extend from the North Tongue Point property in 2009.

The collapsed deck, bottom right, outside of one of the rooms at Astoria’s Red Lion Inn, led to closure of the building after further inspection of its structural integrity in 2009.

The Golden Key catamaran in 1969, ready to carry adventurers to Honduras.

A highlight of the sixth war loan drive in Astoria was the personal salesmanship of 3 1/2 year-old Phillip Marcus Steinbock, pictured, in 1944. The little boy is shown in the war bond setting which decorated the window of Jo-Vels shoe store which his father managed.

It’s the kind of giant that will deliver the kind of “good, decent, family-wage jobs that keep local people tied to the local community,” he said.

Many local leaders are hoping he is right.

At the open house at the 30-acre facility Saturday, Witt and many other politicians spoke to a crowd of about 50 people, praising the Port of Astoria for recognizing the underutilized site as a potential economic engine and sliding into the drivers seat.

Starting Nov. 1, the Port became a landlord at North Tongue Point, which is home to five finger piers, 140,000 square feet of warehouse space inside two old U.S. Navy hangers, open tarmac and access to the Portland and Western Railroad. There are about a dozen tenants subleasing portions of the site already, and several other businesses are waiting to move in.

The Red Lion Hotel in Astoria has closed its doors for at least four months after finding “pretty big defects” in the structural integrity of its building in the Port of Astoria’s West Mooring Basin, according to a company spokeswoman.

During a storm last month, one of the hotel’s decks collapsed and sent five guests into the water below.

The hotel closed all of its balconies immediately following the incident and had them all inspected, according to Red Lion spokeswoman Pat Stryker.

The inspection turned up some problems with the structures supporting the balconies, she said, “and we didn’t want to take any chances.”

CANNON BEACH – Volunteers who educate visitors about the tide pools at the base of Haystack Rock stayed busy this year.

They made at least 77,579 contacts with people who sought information about the sea creatures, birds and environment surrounding Haystack Rock.

The statistics were compiled over 178 days on the beach, where 80 volunteers spent 2,132 hours educating people about the 235-foot monolith.

A 2-mile loop road around the site of major buildings for the $142 million Northwest Aluminum Co. plant to be built in Warrenton was completed this week by Cascade Construction Co. Salem, road contractor.

The company applied lime to stabilize the road surface, base rock and oil. The road project took about two months.

Harold Hare, project engineer for the plant construction, said today that no further work at the site is in prospect until Northwest Aluminum officials decide whether to begin construction this winter.

The view into the future came from Frederick W. Tucker, financial analyst for the Seattle firm of R.W. Beck and Associates, analytical and consulting engineers.

The importance of the port to sport and commercial fishermen was stressed by Tucker in his informal verbal presentation to the commissioners, indicating what the consultants had learned since they began their project in September.

“The main asset of the Port of Ilwaco is its closeness to the mouth of the Columbia River and the fishing grounds just off the coast,” Tucker said.

Tucker went on to predict that “Everything looks good for an expansion.”

Seven men soon to embark on a storybook adventure arrived Monday afternoon in Astoria aboard the 46-foot catamaran Golden Key. They and three other men hope to leave about Dec. 23 on a leisurely cruise down the Pacific Coast through the Panama Canal to the east coast of Honduras in search of sunken treasure and lost Mayan cities.

East met west this morning when the 180-foot Cactus arrived from Rhode Island to take over buoy tending duties in the Columbia River area.

Forty-nine men, under command of Lt. Cmdr. Robert Elkins, brought the diesel-powered Cactus around the country and through the Panama Canal. The journey took nearly a month, including brief stops in Panama and at Los Angeles for repair of electronic gear.

Up to 3 feet of water was in the downtown business stem of Cannon Beach at start of high tide at 1:12 p.m. today, according to reports.

“The worst is yet to come, we have an hour of unpredictable weather ahead of us,” the sheriff said. He was stationed at the county jail manning the civil defense emergency radio net. Elk Creek was causing the flooding.

A U.S. sailor, Donald Watson Christensen, drove his car up on the rising span of the Young’s Bay Bridge Thursday night, jumped a 4-foot and widening opening to the other side, and proceeded down the span’s southern slope and on to Seaside.

Christensen was fined $500 and paid $4.50 costs in Astoria’s justice court Friday, on a charge of reckless driving filed against him by state police.

Len Lowry, bridge tender, said he had lowered the barriers and the bridge was on the rise when he heard a crash as Christensen’s car plowed through the span barrier on the north side. Lowry said he rushed to stop the bridge’s rise, and the car leaped the opening when it was about 4 feet across. The car slithered down the other side, banged through the other barrier, and proceeded to Seaside. Lowry said that in another few seconds the span would have been far too wide to allow passage of a car.

Navy search planes from Clatsop airport ranged over the ocean at Seaside from 9:30 p.m. to midnight Monday dropping flares in an attempt to locate a plane which a Seaside police officer reported he had seen drop into the sea. A check of Army and Navy fields in the northwest revealed no plane missing, however. A Coast Guard boat also joined the search and the display of lights caused considerable flurry among Seasiders.

It was thought possible a falling star in the clear skies might have caused the alarm.

The wind was tamed down to a mere 70 mph in the Columbia Gorge at Crown Point today – a breeze compared with yesterday’s zippy 135 miles – but it was still no place to wear a wide-brimmed straw hat.

An increase in valuation of more than $30,000 for city of Astoria-owned real estate during the past 18 months is revealed in a report today on file in City Manager Brewer Billie’s office.

Present value of city property, exclusive of motorized equipment, is $246,558.75, according to the survey just completed for the convenience of insurance company officials in comparison with $213,238 in July 1942. Tapiola Park building improvements listed at more than $13,000 accounted for nearly half of the valuation increase of city owned property.

With the arrival here Thursday of the USS Lavaca, Oregon Shipbuilding Corp. officially ended its AP-5 attack transport series, the first shipyard in the nation to complete a major transport building program.

The Lavaca left the shipyard Thursday afternoon as the climax of a celebration on the outfitting dock, and the vessel made a quick and successful run to Astoria, more than meeting all tests and trials.