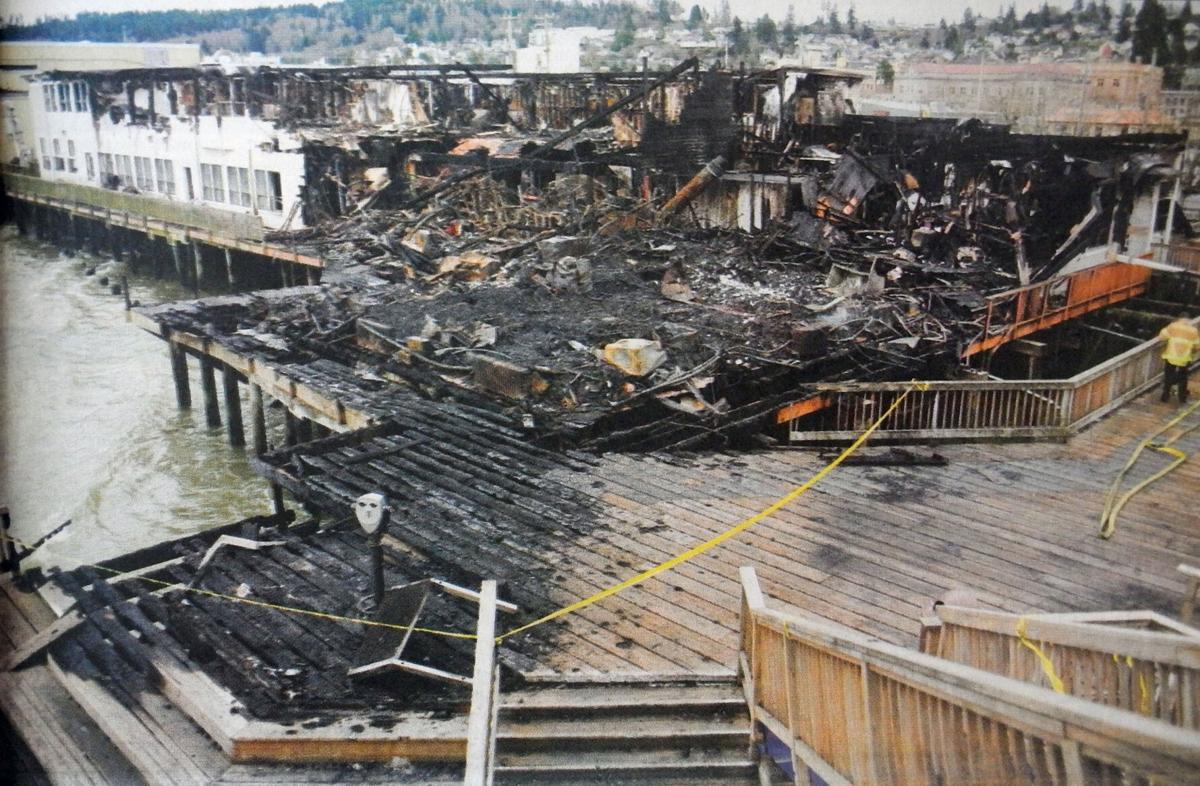 Rubble from the fire that devoured the northwest corner of the No. 10 Sixth St. building in 2010. 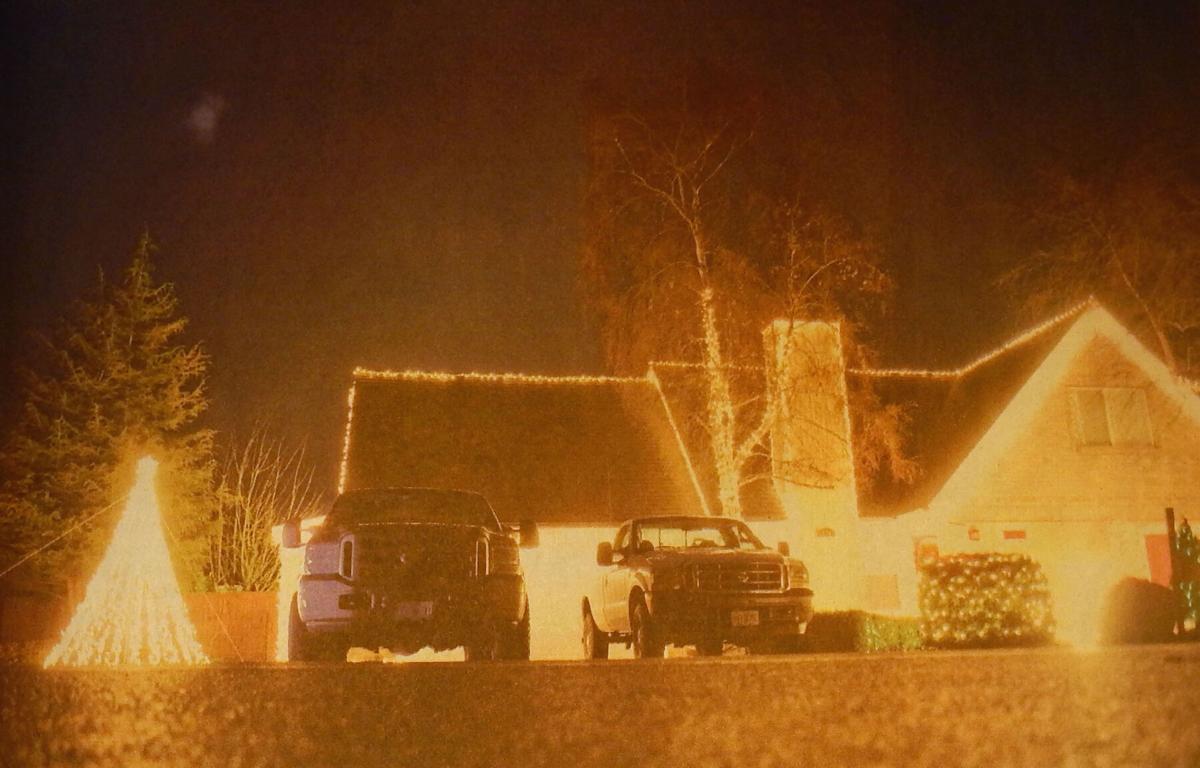 Lights from a Cullaby Lake home on Hawkins Road flash rhythmically to music in 2010. 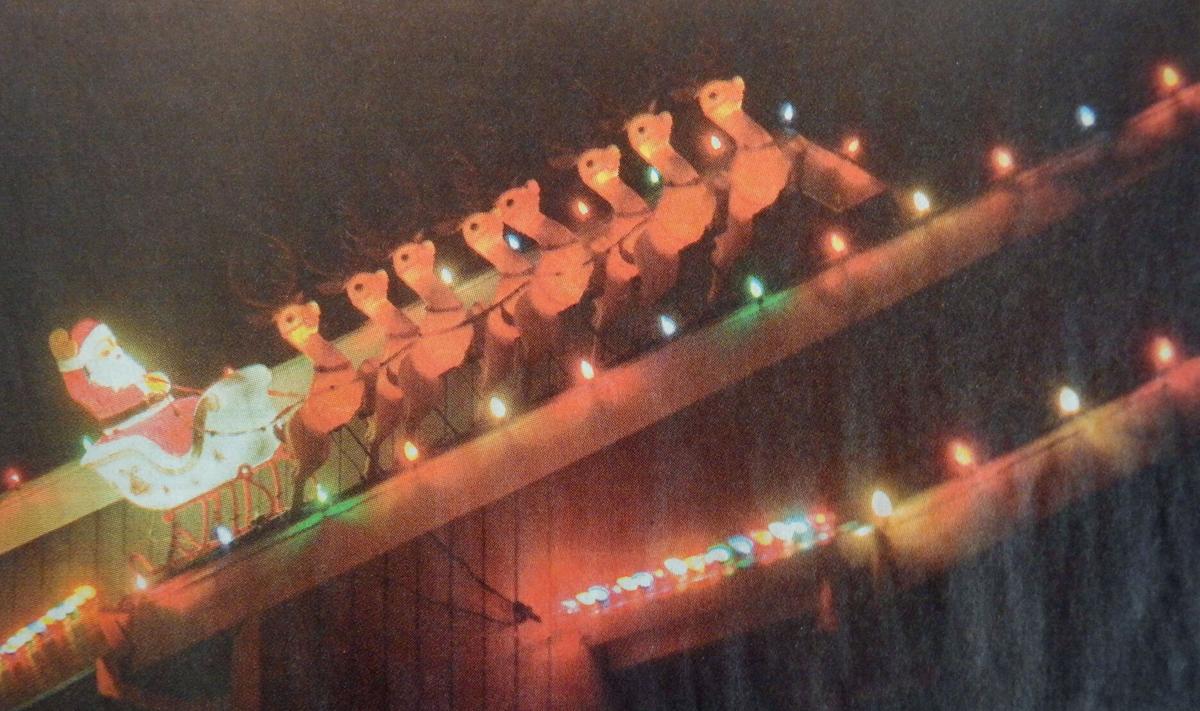 Santa’s sleigh and reindeer appear to have landed a bit early on a Cullaby Lake rooftop in 2010. 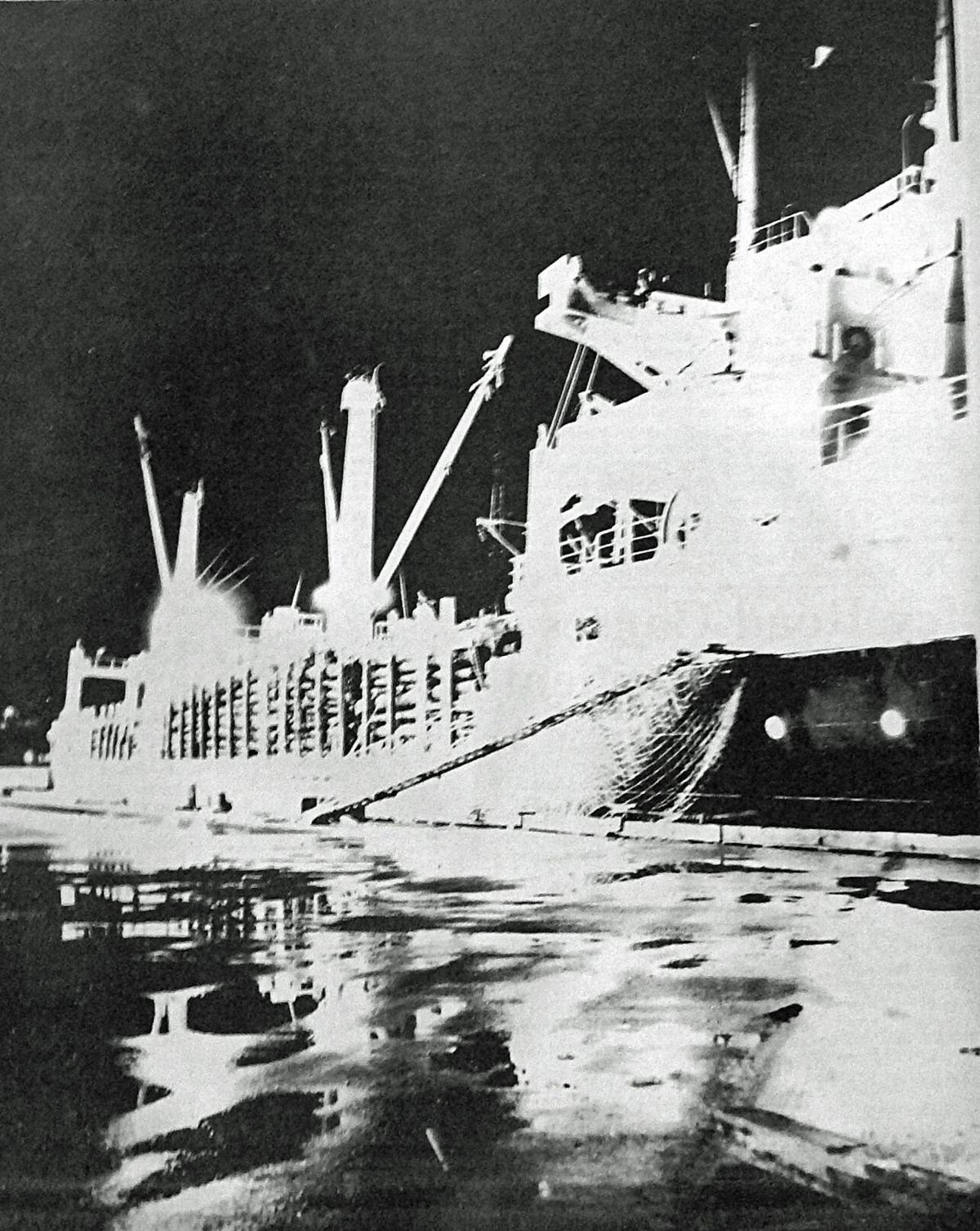 The Port of Astoria saw seven ships loading in the nine-ship capacity harbor in 1970. 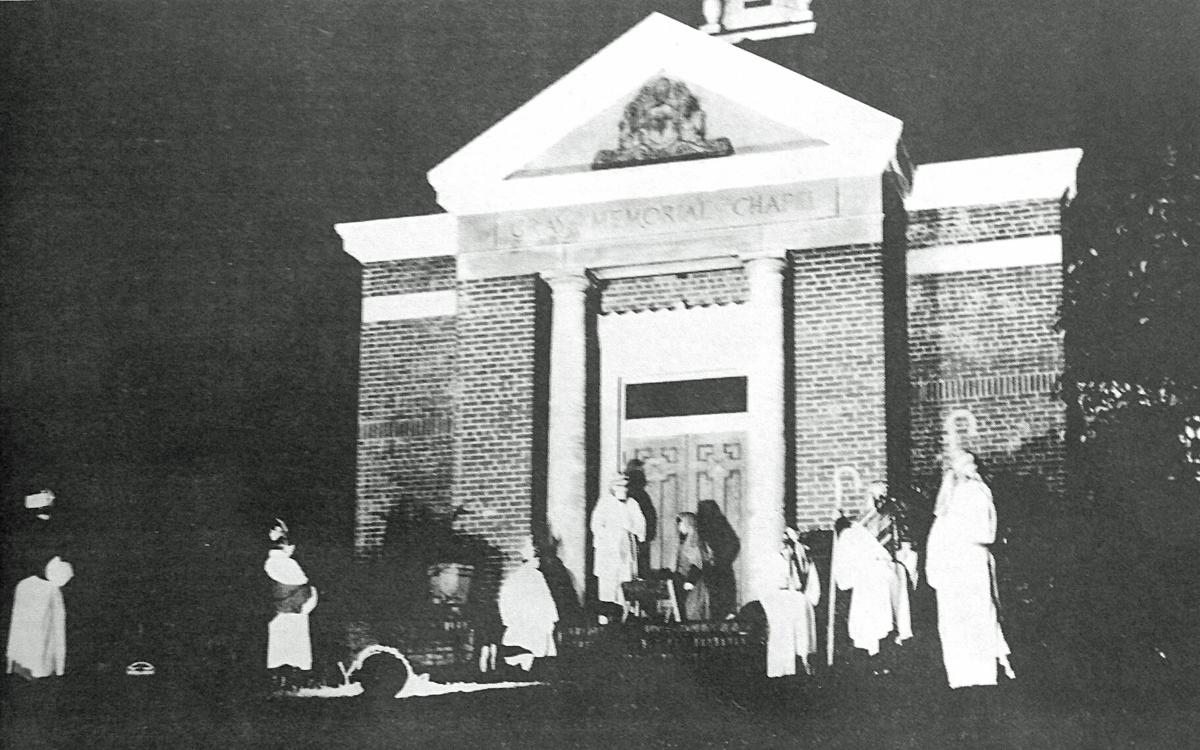 A ‘Living Manger’ scene was portrayed in 1970 by youth at the Pioneer Presbyterian Church. 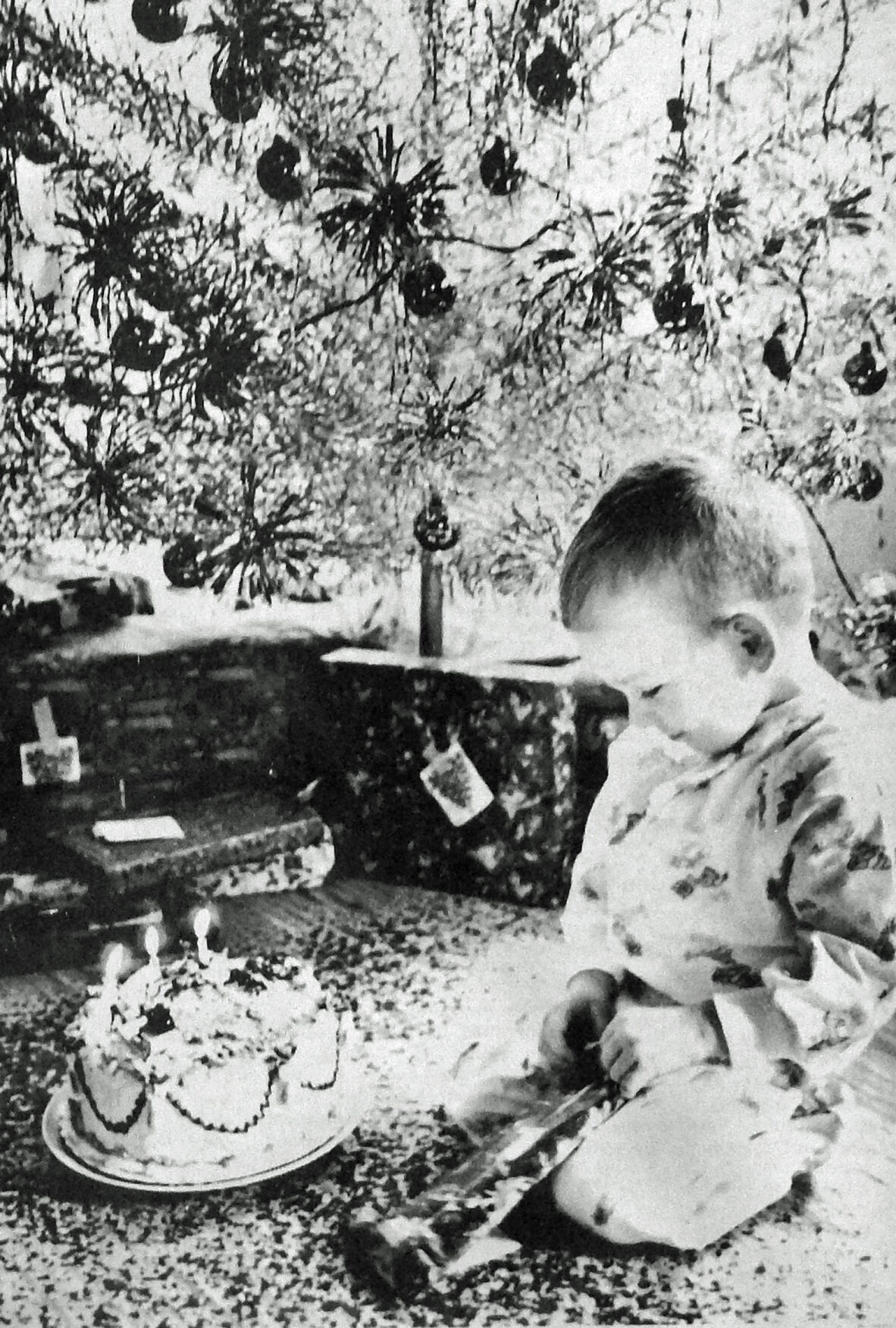 Mike Morin Jr., 3, celebrates his birthday and Christmas in 1970. 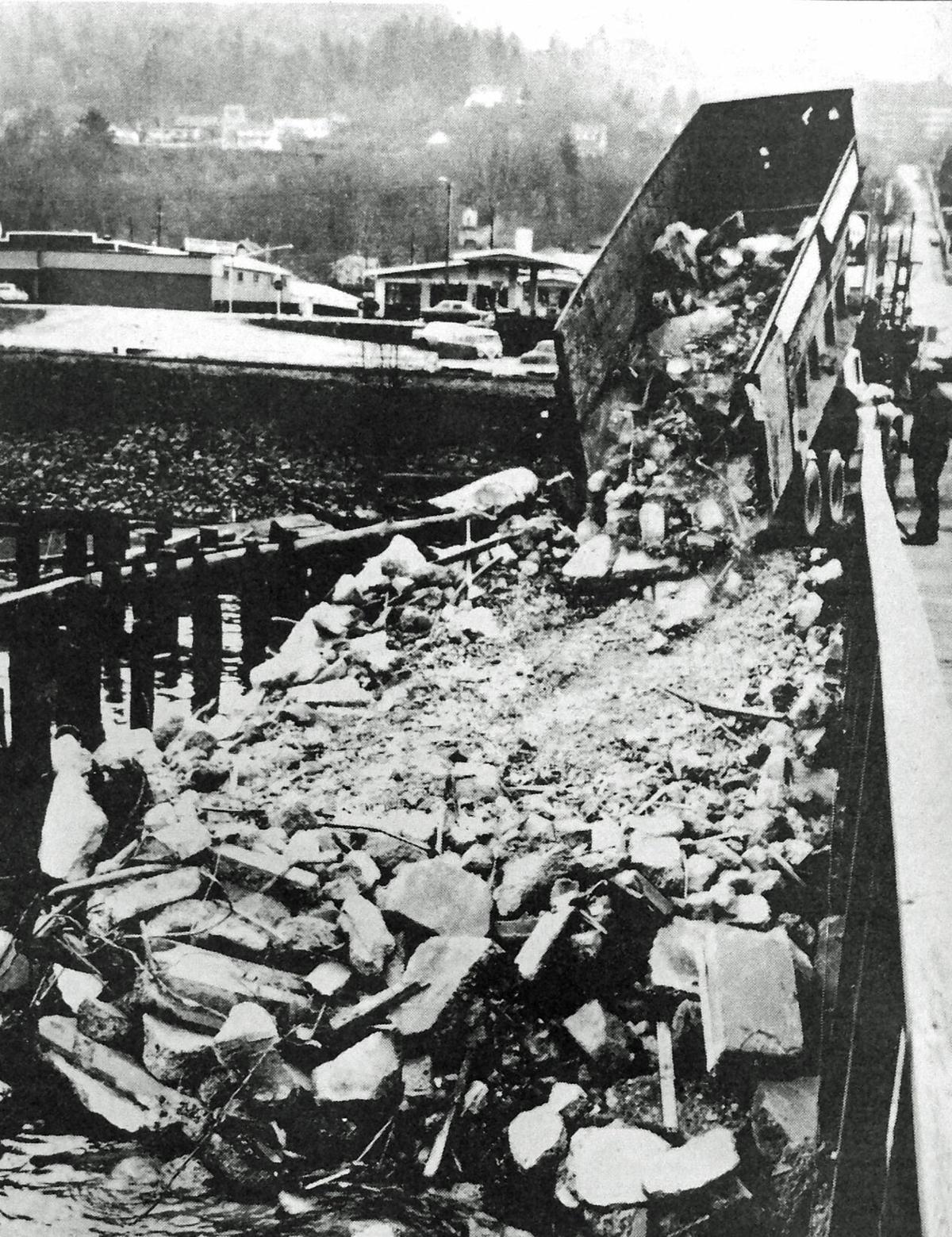 Remains of the former Daily Astorian building that was demolished at 10th and Duane streets was used for a proposed expansion of the Columbia River Maritime Museum park on Marine Drive in 1970.

Rubble from the fire that devoured the northwest corner of the No. 10 Sixth St. building in 2010.

Lights from a Cullaby Lake home on Hawkins Road flash rhythmically to music in 2010.

Santa’s sleigh and reindeer appear to have landed a bit early on a Cullaby Lake rooftop in 2010.

The Port of Astoria saw seven ships loading in the nine-ship capacity harbor in 1970.

A ‘Living Manger’ scene was portrayed in 1970 by youth at the Pioneer Presbyterian Church.

Mike Morin Jr., 3, celebrates his birthday and Christmas in 1970.

Remains of the former Daily Astorian building that was demolished at 10th and Duane streets was used for a proposed expansion of the Columbia River Maritime Museum park on Marine Drive in 1970.

Firefighters were called out several times over the weekend to deal with minor flare-ups at the waterfront site in Astoria where two fires destroyed two historic buildings early Friday morning.

The damage done to the Cannery Cafe, No. 1 Sixth St. and the adjacent No. 10 Sixth St. building is estimated at $5 million to $6 million, according to Tara Constantine, a spokeswoman for the Astoria Fire Department.

And the wreckage is still smoking.

One of the hottest spots of the two fires that raged from about 10:30 p.m. Thursday until roughly 6 a.m. Friday was the northwest corner of the No. 10 building.

A multitude of community members and groups have rallied to help those affected by the fire.

“The whole community has been very supportive, said Wynne Preston, of Kaleidoscope Therapy, who will be relocating to an office above the post office in Astoria.

Reba McEntire is coming to town.

“This is huge news for Astoria, as it will be one of the largest events in our history.” he said. “Reba is one of the best known country western artists and has a large following. We are excited that she has agreed to participate in our bicentennial celebration.”

But Korpela, sitting still and quiet at the end of a long table in Lee Cain’s fisheries science classroom, wasn’t as animated as the enthusiastic crowd gathered around him.

He had the vision, the drive and the skills to make a salmon hatchery project real for generations of Astoria students.

The western snowy plover, a threatened shorebird that numbers only about 150 in Oregon, will be getting more places to nest in a few years.

The Oregon Parks and Recreation Department has entered into an agreement with federal authorities that calls for improving nesting habitat for plovers at three sites on the North Coast: the Columbia River South Jetty, Nehalem Spit and Necanicum Spit.

OLYMPIA — The long-standing custom of public use of Washington state’s beaches has given citizens the right to enjoy those areas as a matter of law, Attorney General Slade Gorton said in an opinion last week.

But Gorton, writing in response to questions from state Rep. Jonathan Whetzel, R-Seattle, said the public has no right to the use of Quinault Indian beach lands.

“In essence, the Oregon Supreme Court held that because the public had customarily and habitually used the beaches of the Pacific Ocean in that state as public recreational area, at least since the advent of recorded history ... such use had ripened into the status of law ...,” he said.

Under the English Common Law Doctrine, a custom, “in order to achieve the status of law,” must be ancient, continuous, peaceable, reasonable, certain, general and “not repugnant to or inconsistent with other customs or other law.” Gorton said the public’s use of Washington’s beaches met the criteria, and had been supported by a series of laws passed by the state Legislature.

Quinault Indian lands, he said, were exempt because of treaty rights which give reservation lands, including ocean beaches, exclusively to the tribe.

A 1901 state law, asserting certain public rights to ocean beaches including Quinault beaches, had no effect on the tribe’s beaches, he said, because the state Legislature had no jurisdiction over the beaches when it acted.

There probably is a large kernel of truth in the observation some conservation-minded Oregonians are making: Interest now being displayed in providing for intelligent land use regulation along the Oregon Coast probably is being spurred by a congressional proposal that coastal zoning authorities be established under federal law for each of the nation’s seashore states.

Christmas Eve was announced some weeks ago as the end of bus service because of high expenses. The system has provide Monday through Friday service.

Davies, who appeared before the Astoria City Council this week, has proposed continuing public transportation. He said today he had every hope of furnishing bus service Monday morning. “It’s going to be touch and go,” he said, because of trying to arrange many details at a time when persons and offices have their minds on Christmas. Davies was to go to Portland today to wrap up details.

He said he was reconditioning a 1965 15-passenger bus and was completing details of an insurance policy.

It looks as though John H. Reith will have to build a more substantial barricade than a stout barbwire fence if he’s going to keep run-away cars out of his lotus field and pasture land which is about 10 feet below the Lewis and Clark Highway in front of Ocean View Cemetery.

It’s beginning to be a commonplace occurrence for cars careening around a sharp bend to keep right on going, plunge over the embankment, tear through the barbwire fence and land in a heap in the field below. A woman driver, with her four children, is the latest victim of such a mishap at this point. On Monday morning while on her way to Astoria she told persons who came to her assistance that the car struck a rock, nosed into the bank on the upper side of the highway and before she could get it under control and slid across a patch of ice to go over the embankment and land right side up in the field below.

SEASIDE — A battle with a 12-foot octopus, which nearly ended disastrously for George Smith, owner of the Seaside Aquarium, and his assistant, John O’Brien, is a recent experience the two men had when they were offshore at Point Defiance in Tacoma, Washington, while in search of sea pens. The water was very clear and from the little boat the huge octopus could be plainly seen in about 10 feet of water. In the struggle the huge sea serpent nearly capsized the little craft but it was finally landed with hooks and is now in the octopus tank at the aquarium.

The sea pens, so named as they are shaped like an old fashioned quill pen, are found in the Puget Sound near Tacoma. They are a brilliant orange and spread their quills like an ostrich plume.

Astoria boat building shops, which have been working at limited capacity because of a lumber shortage, will soon be on a normal schedule.

The Columbia River Packers Association managed to cut some of its own flooring and other finished lumber when supplies ran out. This situation slowed up production. The Columbia Boat Building Co. employed a small crew, using what materials it had. Victor Meriolain, who is erecting an express cruiser for Jerry Dimick, of Astoria, is now able to proceed with lumber available in a short time. Some repair work has been done recently by the Lindstrom Boat Shop. This veteran firm may build two or more fishing boats in the near future.

The sensational war-developed new rat poison, “1080,” which was publicized in the Saturday Evening Post recently, is being investigated by the city to determine possibilities of its use in an anti-rat campaign.

Herman Kehrli, secretary of the League of Oregon Cities, has informed the city administration that the poison is not available to cities, but that its use is being handled by the U.S. Fish and Wildlife Service in Oregon.