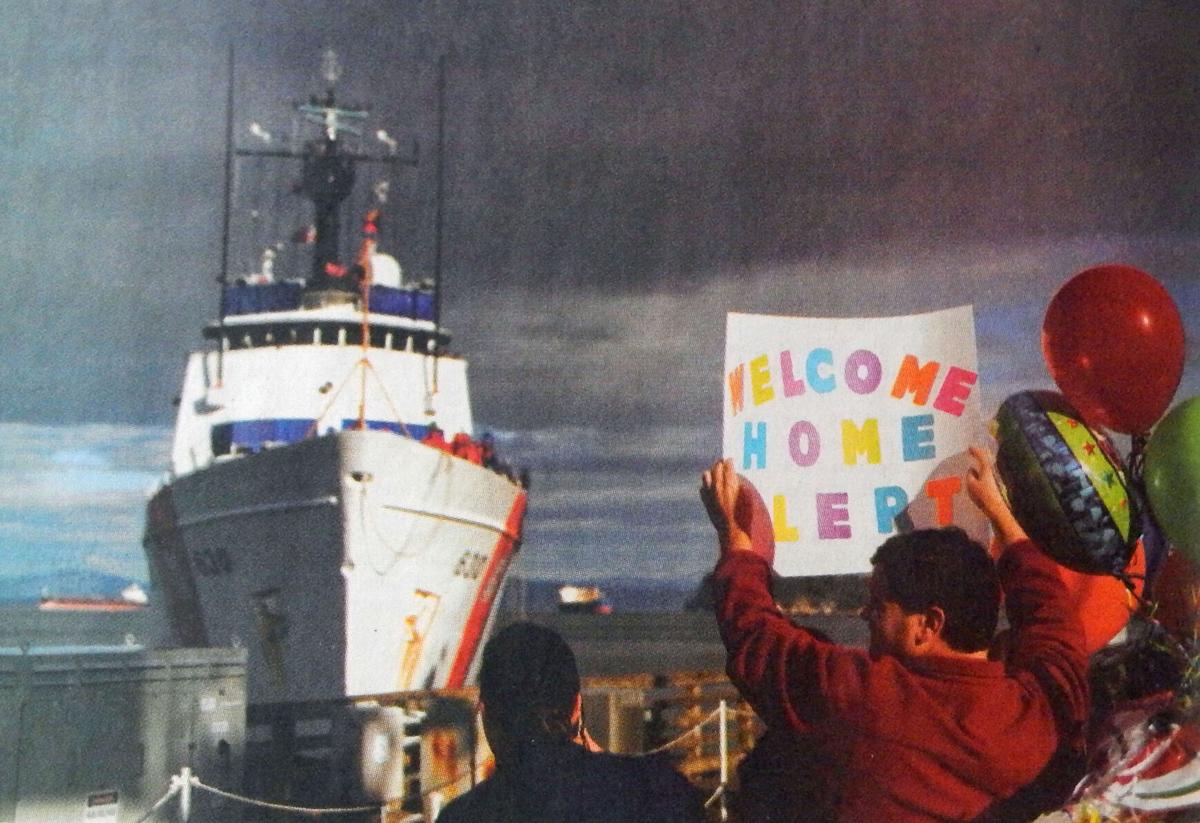 After a 77-day deployment, the U.S. Coast Guard cutter Alert was welcomed home in Astoria with colorful balloons and signs in 2010. 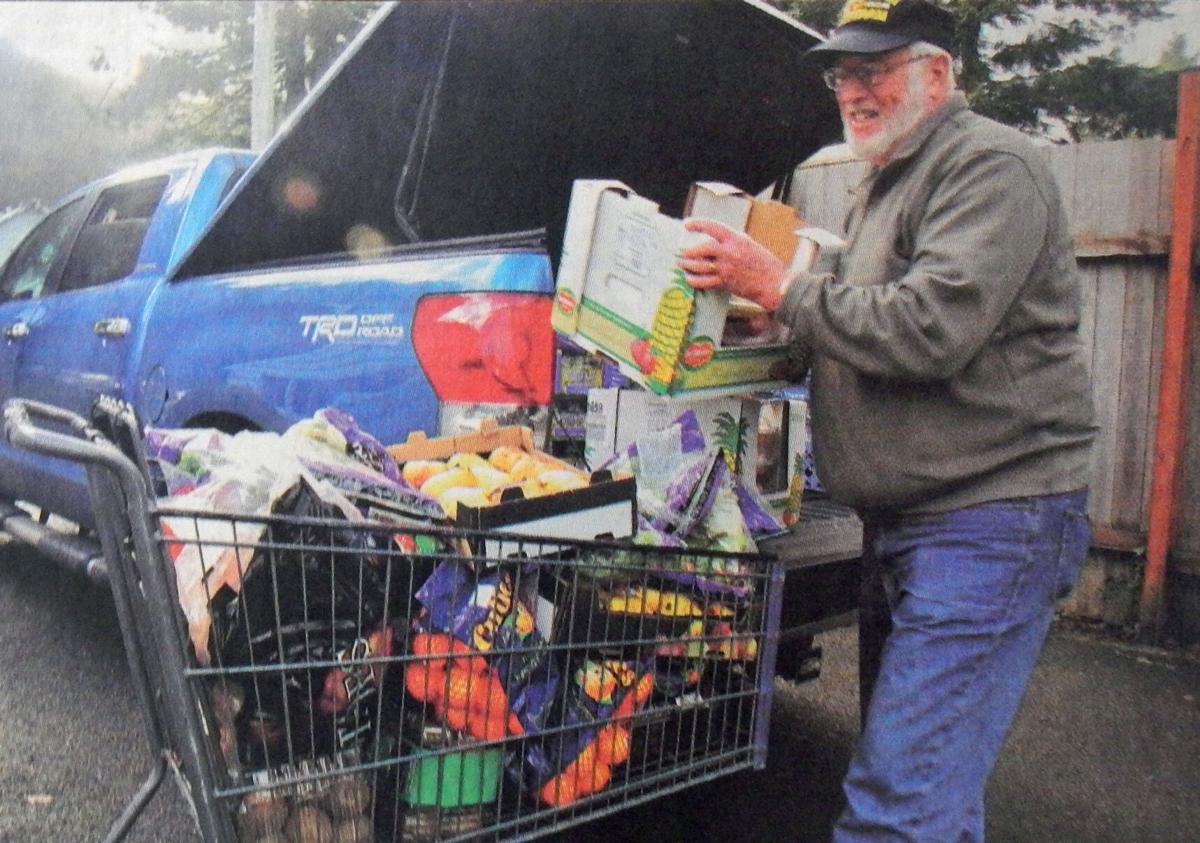 Dan O’Reilly, volunteer for the Cannon Beach Food Pantry, loads a grocery cart with produce in 2010 that he collected from Costco, which donates produce it can no longer sell, but is still good, to food pantries throughout the county. 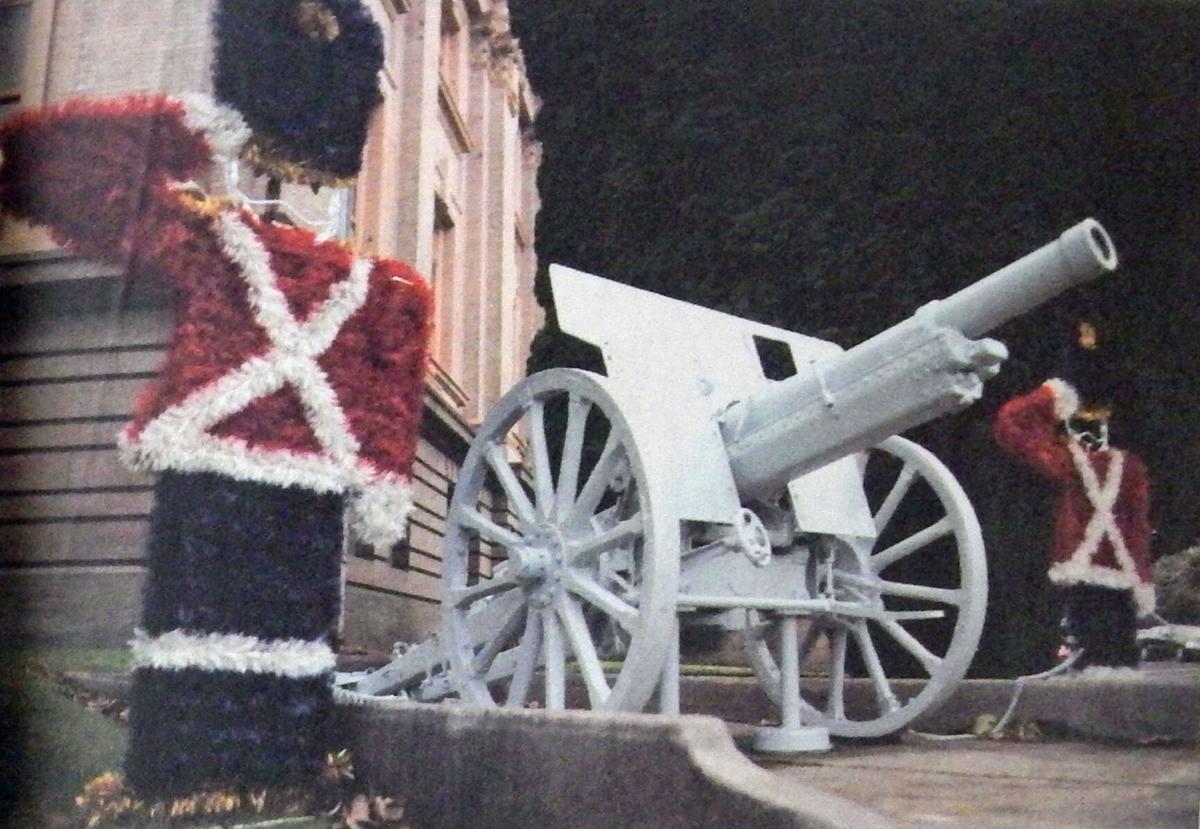 Clatsop County’s historic Japanese-made howitzer in front of the Clatsop County Courthouse in 2010 after it underwent much needed cosmetic restoration. 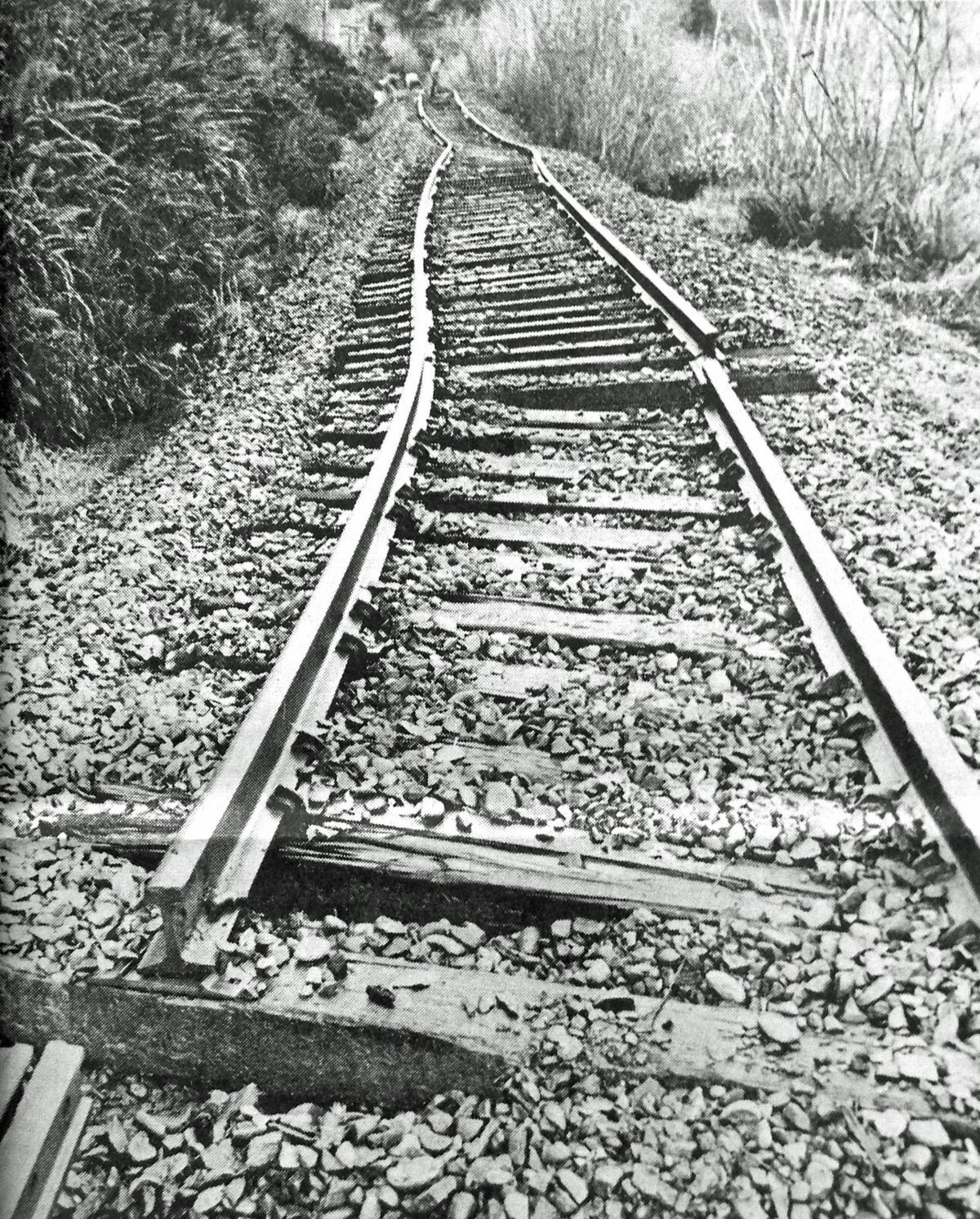 Part of the half mile of damaged railway after the slide from U.S. Highway 30 in 1970. 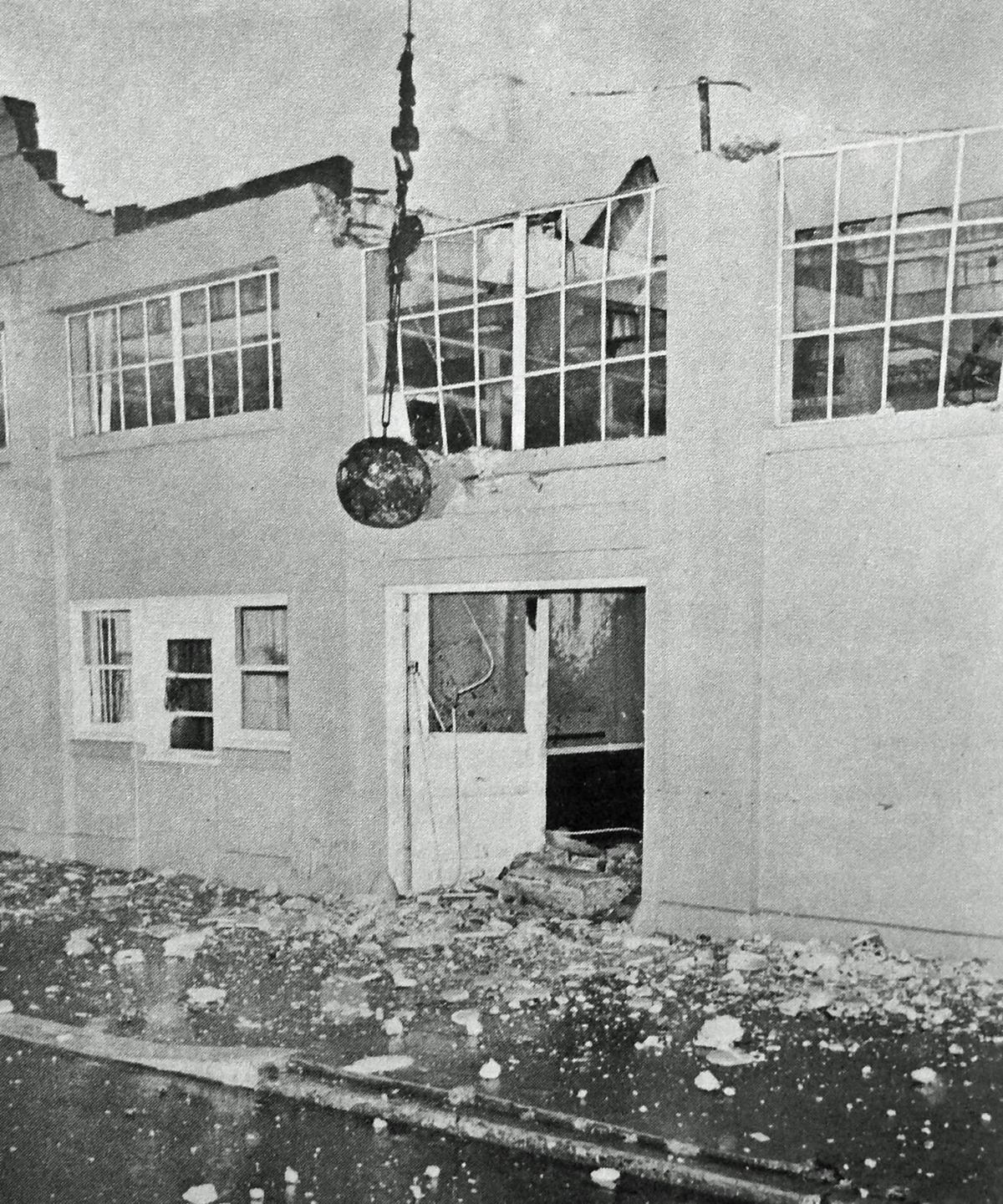 A wrecking ball smashes into the old Daily Astorian building as Ed Ritter Wrecking Co. began to level the building for the new U.S. National Bank of Oregon building in 1970.

After a 77-day deployment, the U.S. Coast Guard cutter Alert was welcomed home in Astoria with colorful balloons and signs in 2010.

Dan O’Reilly, volunteer for the Cannon Beach Food Pantry, loads a grocery cart with produce in 2010 that he collected from Costco, which donates produce it can no longer sell, but is still good, to food pantries throughout the county.

Clatsop County’s historic Japanese-made howitzer in front of the Clatsop County Courthouse in 2010 after it underwent much needed cosmetic restoration.

Part of the half mile of damaged railway after the slide from U.S. Highway 30 in 1970.

A wrecking ball smashes into the old Daily Astorian building as Ed Ritter Wrecking Co. began to level the building for the new U.S. National Bank of Oregon building in 1970.

The U.S. Coast Guard cutter Alert will return home to Astoria this afternoon — making it a full house for the Coast Guard’s three Astoria-based cutters.

The Alert’s crew will have finished a productive 77 day deployment using helicopters, planes and surface chases to capture eight suspected drug smugglers and their cargoes of cocaine.

The proposed marine reserves off the Oregon Coast are moving closer to becoming law.

The contentious Cape Falcon site has been redesigned since it was considered by a community team in an 11-month process that ended in Astoria on Nov. 10 without a strong consensus.

The advisory council signed off on a site that is smaller and includes a marine protected area that allows some limited fishing and crabbing.

Ranging from $500 to $1,500, the grants will pay for projects ranging from a theater renovation to a traveling puppet show with a Native American theme.

The back of Dan O’Reilly’s truck is filled with boxes of produce. He spends a good 30 minutes taking it out and putting it into a grocery cart, hauling it into the Cannon Beach Bible Church and placing it on tables.

Soon the spinach, carrots, pomegranates, grapes and other fruits and vegetables will be weighed and prepared to put into more boxes — this time for recipients who need emergency food to feed their families.

O’Reilly and 30 other volunteers at the Cannon Beach Food Pantry each have their own tasks, whether it’s collecting donated produce from Costco, weighing the food to keep track of what is put into the emergency boxes or helping new clients fill out applications.

“It takes a lot of people to feed a village,” said Nancy Littell, who also volunteers for the pantry.

That village of recipients in Cannon Beach averages 60 to 65 people a week who come to the pantry at the church. But it’s growing larger, said pantry manager Molly Edison. “Two weeks ago, 118 people arrived for boxes,” she said. “One of the things that astonishes me is the number of people we serve.”

The Oregon Department of Fish and Wildlife Commission refused to adopt a barbless hook regulation to maximize protection of wild salmon and steelhead in the Columbia River. Even though the Washington Department of Fish and Wildlife did adopt a barbless hook regulation for sport fisheries, the rule could not be implemented because of the commission’s opposition.

Phil Anderson, director of the Washington Department of Fish and Wildlife, said the prospect of having incompatible fishing regulations on a portion of the Columbia River jointly managed by the two states prompted him to delay the barbless rule for at least a year.

Forty-eight years ago today, the downtown business district in Astoria was destroyed by a raging fire.

The fire blazed for 11 hours on Dec. 8, 1922, burning 40 acres of stores, offices and homes extending over 32 blocks from 7th to 14th and 15th and from the waterfront to Exchange Street. It left 2,000 people homeless with damage estimated at $20 million.

Alta C. Shalk wrote in The Daily Astorian in a story several years ago that her family was awakened by a telephone call at 3 a.m., 45 minutes after the fire started in the center of downtown Astoria.

“My father, John Christians, owned a large warehouse between Duane and Exchange streets on 10th,” she wrote. “He rented the building to his brother-in-law, August Hildebrand, who was in the furniture business.

“I remember my father hurriedly dressing, all the while exclaiming that although everyone was saying the town was burning, they were just excited and exaggerated.”

“My father returned sometime after daylight, fully convinced now that the city was doomed. He had helped the Hildebrands carry as much as possible from their store before it burned. The firemen had sprayed water on the building as long as possible, and my father was wet to the skin. After he changed clothing he returned to watch his own building go.”

A Nehalem man is missing and presumed drowned in Nehalem, and highways and rail lines were badly damaged in Clatsop County due to heavy rains, accompanied by strong winds over the weekend.

Two couples are moving out of their homes today because of damage done by the slide which buckled U.S. Highway 30 and twisted the Burlington Northern Railroad tracks some 7 miles east of Astoria.

Astoria will need to apply for federal aid to replace its downtown traffic lights.

Bruce Clausen, city engineer, told the City Council Monday that the signals are so old and obsolete that it’s increasingly hard to get replacement parts for them. He said parts are obtained sometimes from the State Highway Commission, but those are becoming harder to obtain.

Under the federal TOPICS program, a city puts up 20% of the cost, the state covers 20% and the federal government picks up 60%.

Tentative plans for enlargement of the U.S. Coast Guard Air Station Astoria and the acquisition of a much larger helicopter to be used for search and rescue as well as foreign fisheries patrol was filed at the Port of Astoria Commission meeting Tuesday night.

Capt. James Clune, group Astoria commanding officer, told the Port Commission that plans, if approved by Coast Guard headquarters in Washington, D.C., and by Congress, would triple the number of personnel at the air station, double the size of the present operations building and add other amenities to the station.

Clune said the tentative proposal calls for doubling the size of the hangar — to handle the larger helicopters — plus construction of a bachelor’s officer quarters and enlisted men barracks, attached by a joint dining area; a dispensary, post exchange and public works and electronics shop.

Flu season has not arrived yet in the lower Columbia but respiratory ailments are on the upswing, according to the Oregon State Board of Health communicable disease summary for the period ending Nov. 28.

Highway commissioners from Oregon and Washington state have a good many joint postwar projects lined up, but Washington wants nothing to do with a proposed ferry across the mouth of the Columbia River.

The Washington officials, meeting with the Oregonians in Portland, said their only authority for an Astoria ferry would be under the toll road law but they hesitated to make any move on the Columbia that might set a precedent for ferries operating on the Puget Sound to San Juan Islands and on Hood Canal.

A nationwide influenza epidemic is in the early stage but there is no danger of a repeat of the 1918 wave of flu, according to public health service reports disclosed today.

The reports coincided with an announcement by the University of Michigan of a vaccine made from fertile hen’s eggs, which it said has proved effective as a protection against influenza in the U.S. Army. The reports said, however, that it would probably take some time for commercial firms to build up an adequate supply for sale.

The butter shortage is acute not only in Astoria but all over the nation, officials of the Lower Columbia Cooperative Dairy Association declared today in discussing reports that some local people had managed to find considerable quantities of butter in neighboring cities and returned with some for their tables.

Astoria and state fish commission officials wrestled for several hours Wednesday evening with a knotty problem presented by the desire of both agencies to use the waters of Big Creek.

The city, looking forward to the future when growth of the community, industrially and otherwise, may make the present water supply inadequate, has been contemplating construction of a new pipeline to tap Big Creek’s upper reaches and provide an abundant supply of water from that full-flowing stream.

But the state fish commission, which 10 years ago established a hatchery on Big Creek and found its annual egg take there soaring by leaps and bounds, has been working on plans to develop the hatchery to an extent that may ultimately require all the water in the creek.

No solution of the problem was reached Wednesday night.

The first passengers in some five years to board a ship at the port docks will walk up the gangplank of the Whirl Wind this afternoon. This C-2 cargo-passenger ship arrived Tuesday night and is loading flour at the face of pier No. 1 for South American ports.

Norblad was nominated as the party candidate by a congressional committee from 10 northwest Oregon counties comprising the 1st Congressional District, which met here Saturday.

Francine Scott, of Astoria, was named Clatsop County’s Victory War Loan Queen by a committee of judges this afternoon at War Loan headquarters.

The judges determined that Scott and Mrs. Thelma Littrell Gabriel, of Seaside, were tied in the bond-selling portion of the contest and decided the issue on the basis of “queenly qualities.”