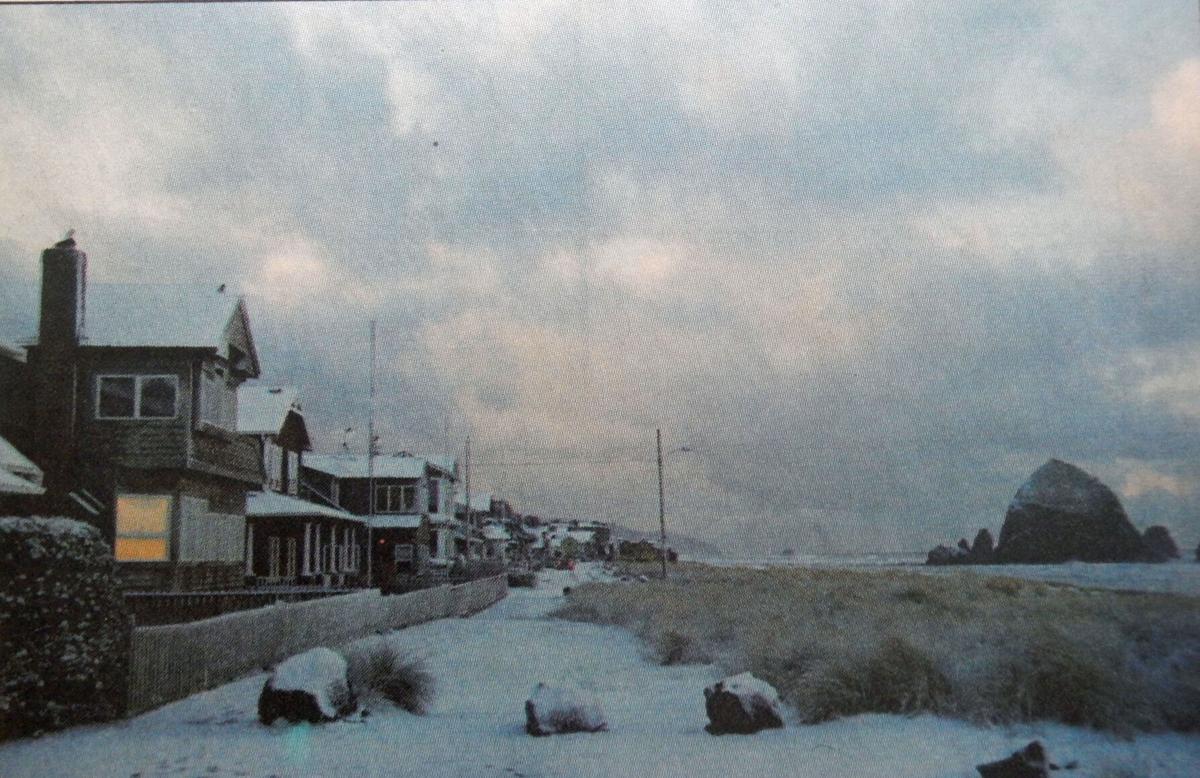 About an inch of snow covered Cannon Beach and sprinkled Haystack Rock in February 2011. 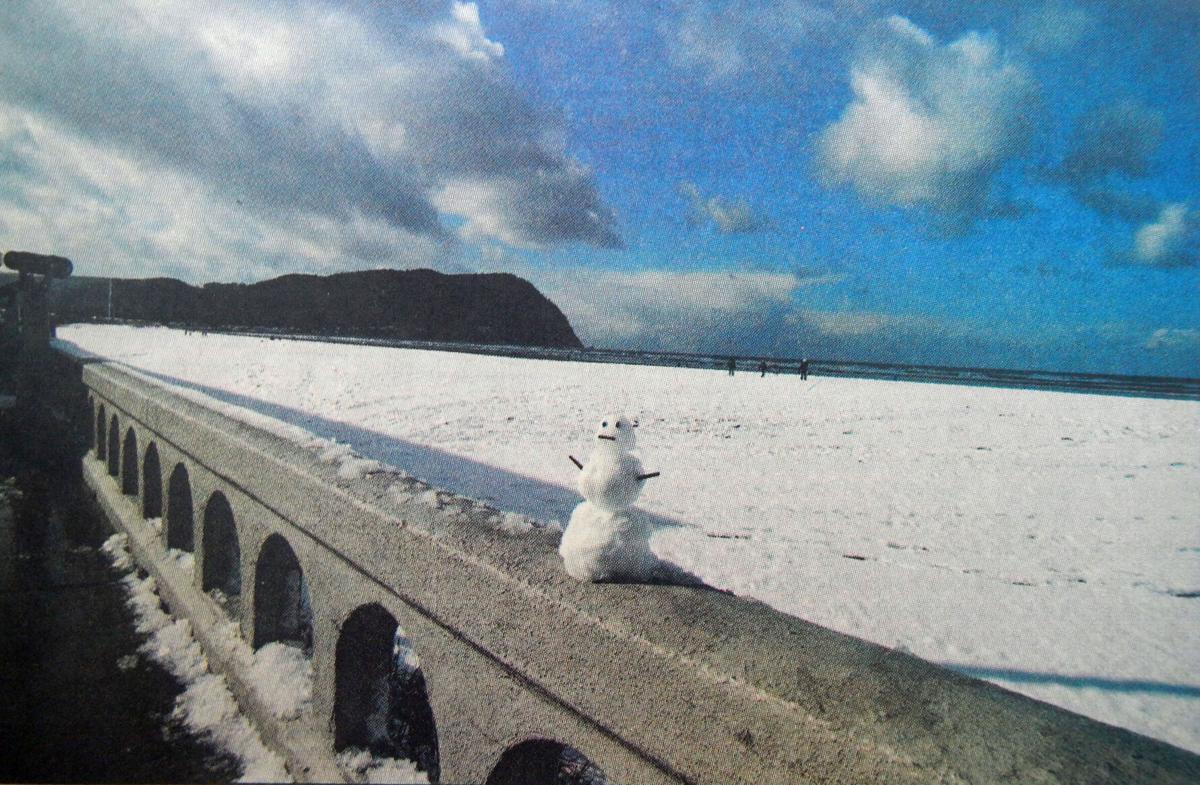 Valerie Huxley, an employee at the Seaside Aquarium, made this snowman in Seaside in February 2011. 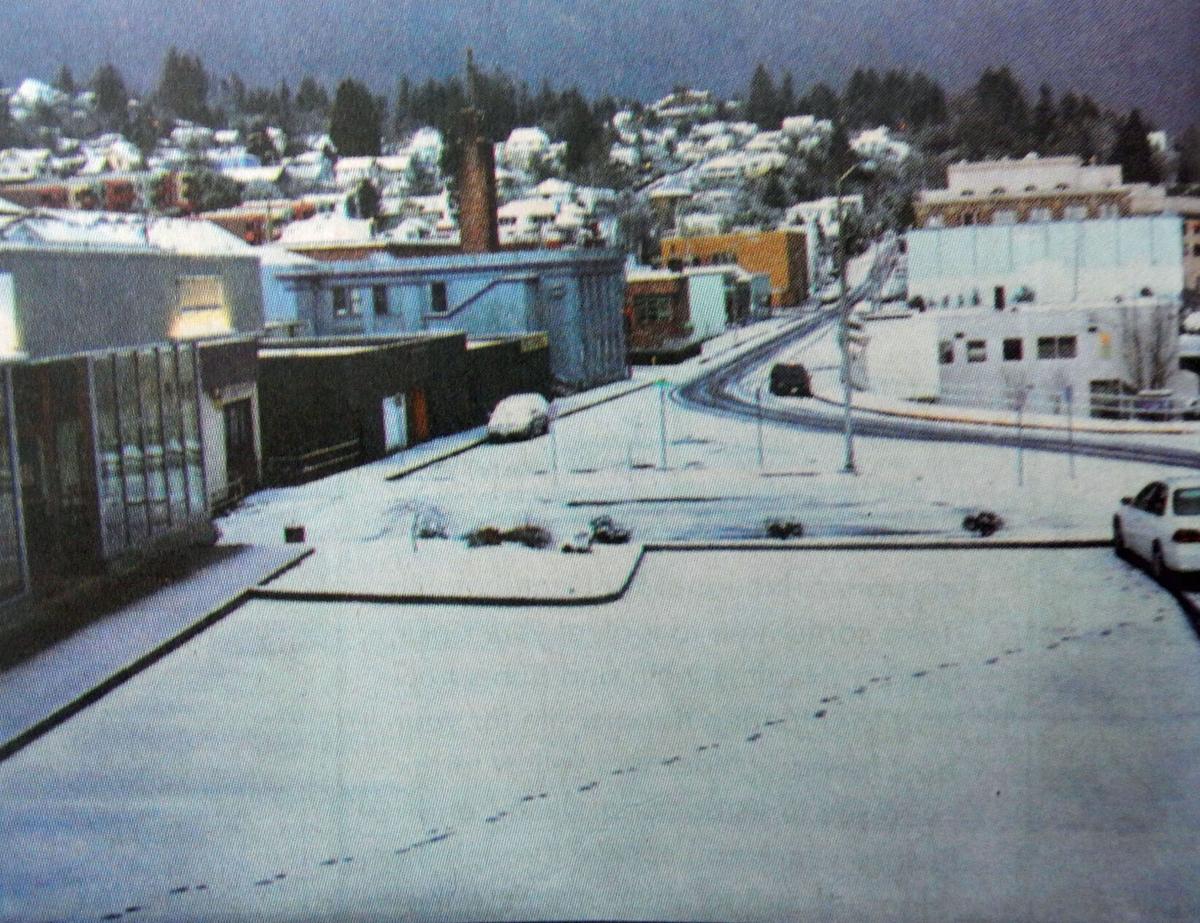 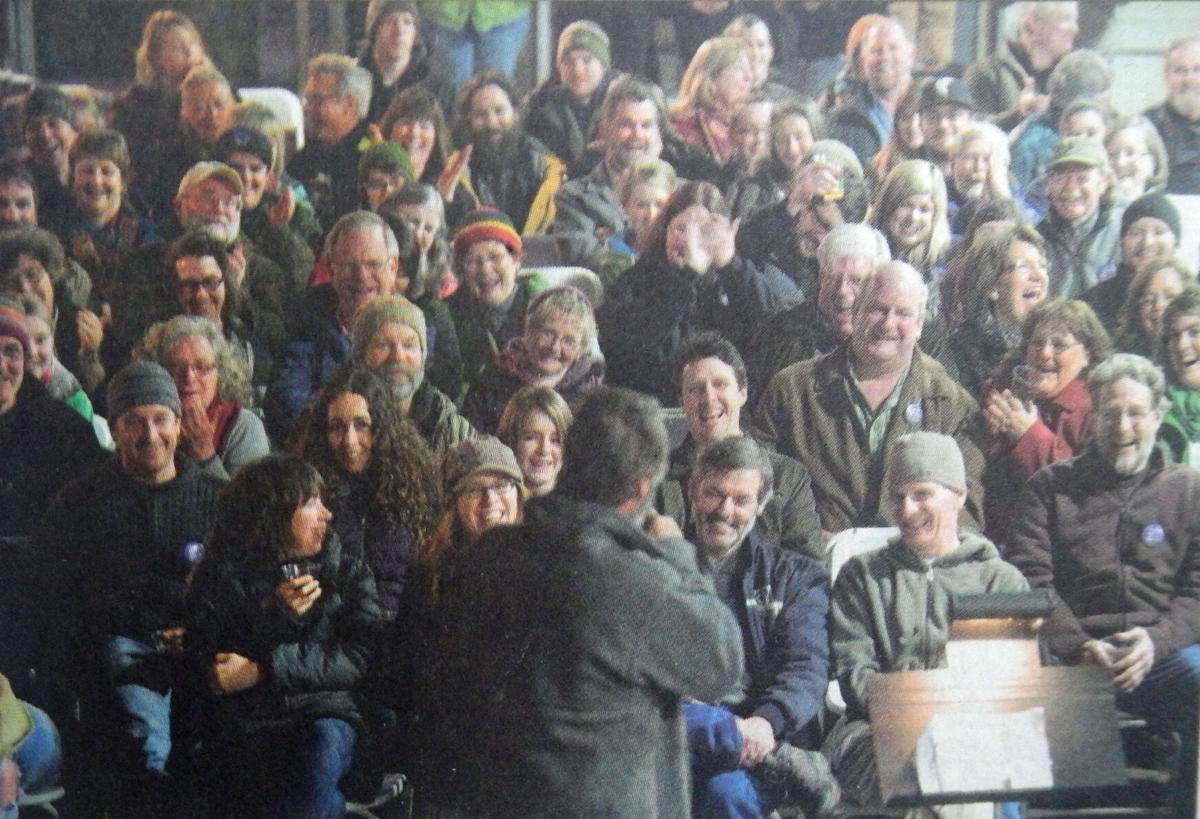 Geno Leech, of Chinook, Washington, draws a laugh from a FisherPoets Gathering crowd in 2011 inside Fort George Brewery’s Lovell Taproom. 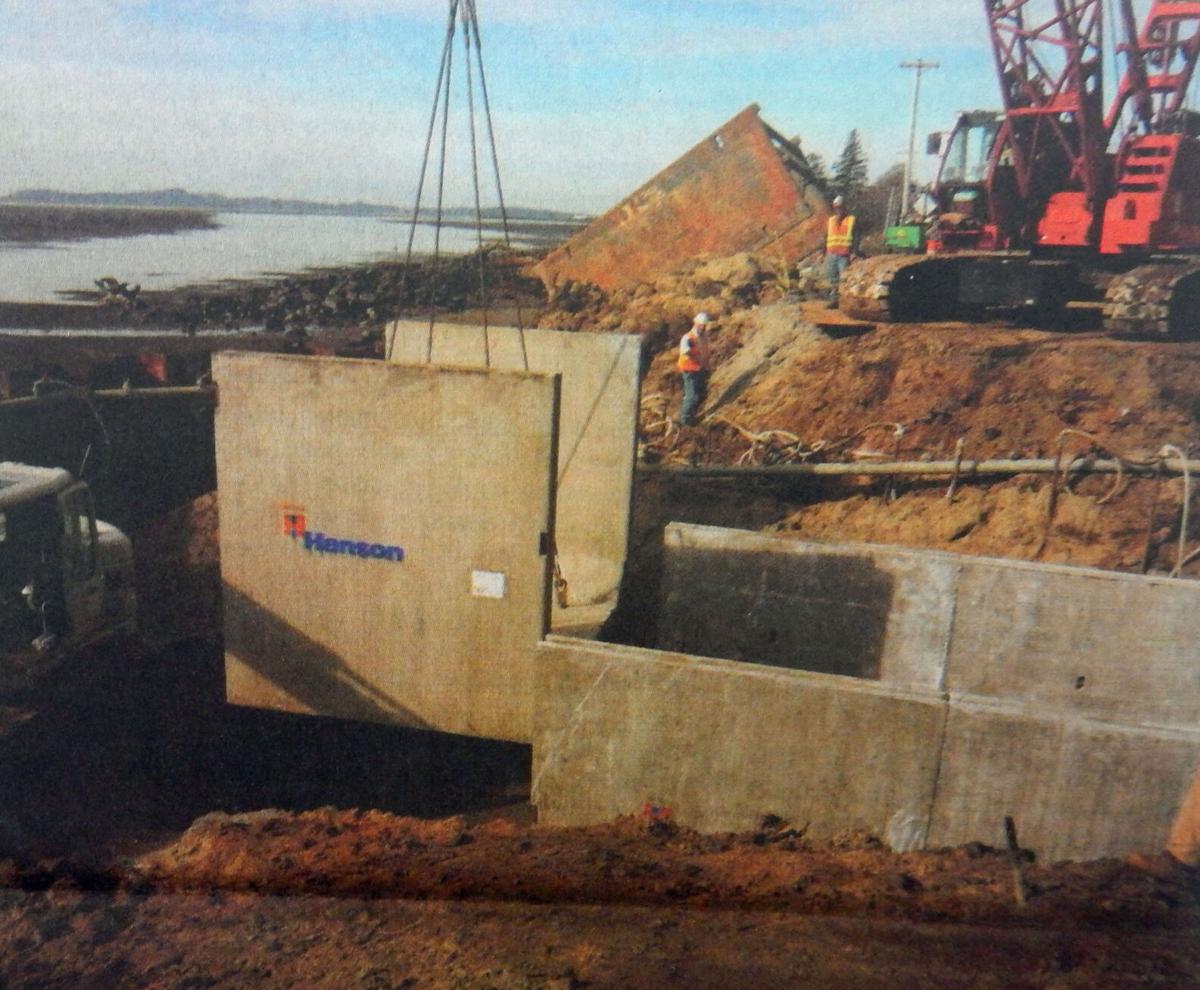 Sections of a 12-foot-wide culvert are installed beneath U.S. Highway 101 near Chinook, Washington, in 2011.

About an inch of snow covered Cannon Beach and sprinkled Haystack Rock in February 2011.

Valerie Huxley, an employee at the Seaside Aquarium, made this snowman in Seaside in February 2011.

Geno Leech, of Chinook, Washington, draws a laugh from a FisherPoets Gathering crowd in 2011 inside Fort George Brewery’s Lovell Taproom.

Sections of a 12-foot-wide culvert are installed beneath U.S. Highway 101 near Chinook, Washington, in 2011.

The Astoria City Council has decided to hand over some drunk-driving cases to Clatsop County District Attorney Josh Marquis.

But not all of them and not right away.

City Councilor Russ Warr said he sees this as an attempt to make peace with the district attorney, who has been campaigning for the change in handling of cases involving driving under the influence of intoxicants.

The City Council has agreed to submit a letter to City Manager Paul Benoit in favor of addressing the criticisms the Municipal Court has faced for prosecution of cases involving DUIIs.

“I’m very supportive of this step,” said City Councilor Karen Mellin, who campaigned for closer scrutiny of DUIIs when she was elected last fall. “Maybe it will clarify, for us as well as the public, what does happen with DUIIs.”

CHINOOK, Wash. — Where a 24-inch culvert once let in a trickle of water and the occasional confused, claustrophobic fish, a huge 12-foot-by-12-foot culvert is now installed under U.S. Highway 101.

Water is again flowing through what was historically a wetland area.

Funded by an array of sources and combining the organization and permitting powers of a variety of agencies, the project is nearing completion.

The Fort Columbia Tidal Reconstruction Project, headed by the Astoria-based Columbia River Estuary Study Taskforce, seeks to reconnect the Columbia River estuary with a distributary of the Chinook River that flows through a wetland east of Highway 101.

SEASIDE — Sprinklers in a storage area adjacent to the Carousel Mall in downtown Seaside prevented a fire from causing major damage to the structure Tuesday night.

Seaside Fire Marshal Chris Dugan said firefighters responded to a report called in at 5:39 p.m. Tuesday about water flowing at the Carousel Mall, which contains several individual stores and restaurants within one structure.

The most exciting goal setting session she’s ever been to. That’s how Arline LaMear, president of the Astoria City Council, described last week’s council gathering. Perhaps it was so exciting because so many projects are on the table.

The City Council sat down at the Columbia River Maritime Museum Friday to discuss the library, a recreation center and the Riverfront Vision Plan, among other things.

“We want to call it a recreation center because the term ‘community center’ causes some confusion,” LaMear said. “It means different things to different people.”

The City Council’s goals also include supporting the bicentennial, completing the Garden of Surging Waves, increasing opportunities to participate in outdoor and indoor recreation, redeveloping the former Safeway square, evaluating energy cost-saving measures and maintaining advocacy for the Astoria bypass and for fisheries issues.

SEASIDE — U.S. Rep. Wendell Wyatt says nothing, including ecological factors, should be allowed to stop construction of the proposed American Metal Climax aluminum plant in Warrenton or the Trojan nuclear plant in Rainier.

Addressing the annual convention of the Oregon Building and Construction Trades Council Saturday, Wyatt, an Oregon Republican who represents the North Coast, emphasized the need for more power and employment for Oregon, warning that power shortages pose serious threats for a country which is not supplying additional power to keep up with industrial and population growth.

The awards are for individual excellence in the areas of forestry management, livestock farming, agricultural mechanics and home improvement. The award winners take vocational-agricultural instruction at the Area Vocational Center, operated by the Clatsop Intermediate Education District.

Between now and official observance of America’s bicentennial year, 1976, a novel fourth grade play based on the Lewis and Clark Expedition’s trail end in Seaside may be put to words and music by Walt Disney Productions.

If so, credit will be given locally to Gearhart elementary teacher Frances Shoenborn, her class, the Clatsop Intermediate Education District and several avid supporters of the Lewis and Clark Festival Association.

The play will also likely receive official backing by the Clatsop County Board of Commissioners and possibly the Oregon State Board of Education.

A late winter snowfall in the lower Columbia area slowed the daily pace of residents but did not disrupt the business community or utility services.

A “History of Fort Canby, Washington Territory,” compiled by Capt. Evan Miles, 21st Infantry, who commanded the post in 1893, was among historical records brought to light in the archives of the Harbor Defenses of the Columbia River at Fort Stevens recently.

Carefully written in longhand in an old account book form, the history reveals considerable interesting data about the early days of the U.S. Army post on the rocky promontory of Cape Disappointment.

It records the naming of Fort Canby in 1874 after the post had been called Fort Cape Disappointment since gun platforms were built there for the first time in 1863.

H. Clay Weed, assistant adjutant general of the Department of the Columbia, proposed the name Fort Canby in honor of Brevet Maj. Gen. Edward R. S. Canby, killed by the Modoc Native Americans in their uprising in 1871 in the lava beds of Northern California.

In his proposal, Wood went to great lengths to point out that Cape Disappointment was named by a British man, Capt. George Vancouver, and that Capt. Robert Gray had named the cape “Cape Hancock” in 1792, before Vancouver came.

He urged that the official name of the post be “Fort Canby, Cape Hancock, Washington Territory.” The proposal was endorsed by Brig. Gen. O.O. Howard, then commanding the Department of the Columbia with headquarters of Vancouver barracks.

The name of Fort Canby stuck, but the Cape Hancock part, despite the efforts of Wood and Howard, never did supplant Vancouver’s unfortunate nomenclature for the promontory.

Clatsop County Sheriff Paul Kearney, turned handwriting expert, demonstrated to a 15-year-old juvenile Tuesday that crime does not pay, particularly in the case of a bad check author who has difficulty in spelling.

Confronted with handwriting comparisons, which proved beyond a reasonable doubt that the youth had written a $20 check using his father’s signature, the Astoria youth admitted the charge. But he expressed anxiety to remain lodged in the juvenile compartment of the Clatsop County Jail until his father had time to “cool off.”

After cross examination, the young Astorian remained adamant. Kearney contemplated calling in a handwriting analyst to compare the boy’s handwriting with that on the bad check for the boy to write out. When the youth asked Kearney how to spell February, the sheriff told him to spell it. He did, and in the same peculiar way in which it was spelled on the check.

The misspelling of a proper name in both instances lent additional evidence.

Best salmon catches of the winter season were made during the past three days by Columbia River gillnet fishermen who have had poor luck thus far this year.

The farm has about 80 acres of cranberries already cleared and planted, together with 6 acres of blueberries and an extensive experimental plot.

But when it is eventually completed — about six years from now — the farm will contain some 300 acres in cranberries and 100 acres in blueberries, as well as an extensive experimental tract.

February’s many hard downpours of rain brought a total of 16.63 inches for the month to make it the dampest month of an extremely wet winter and to bring the total winter rainfall for the past four months to nearly 60 inches.