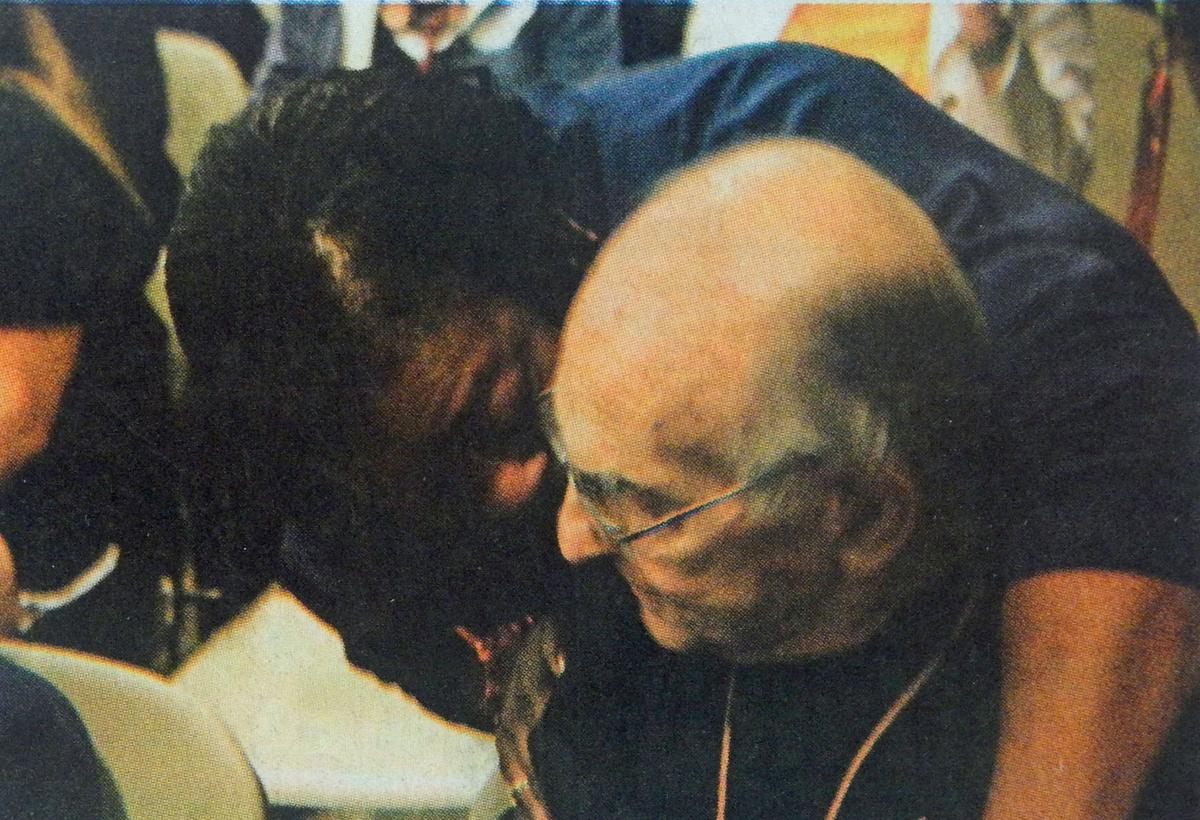 2009 — Reba Strickland, one of the first kids at Camp Rosenbaum years ago, hugs the founder, retired Brig. Gen Fred Rosenbaum, and tries to tell him just how much his camp changed her life. 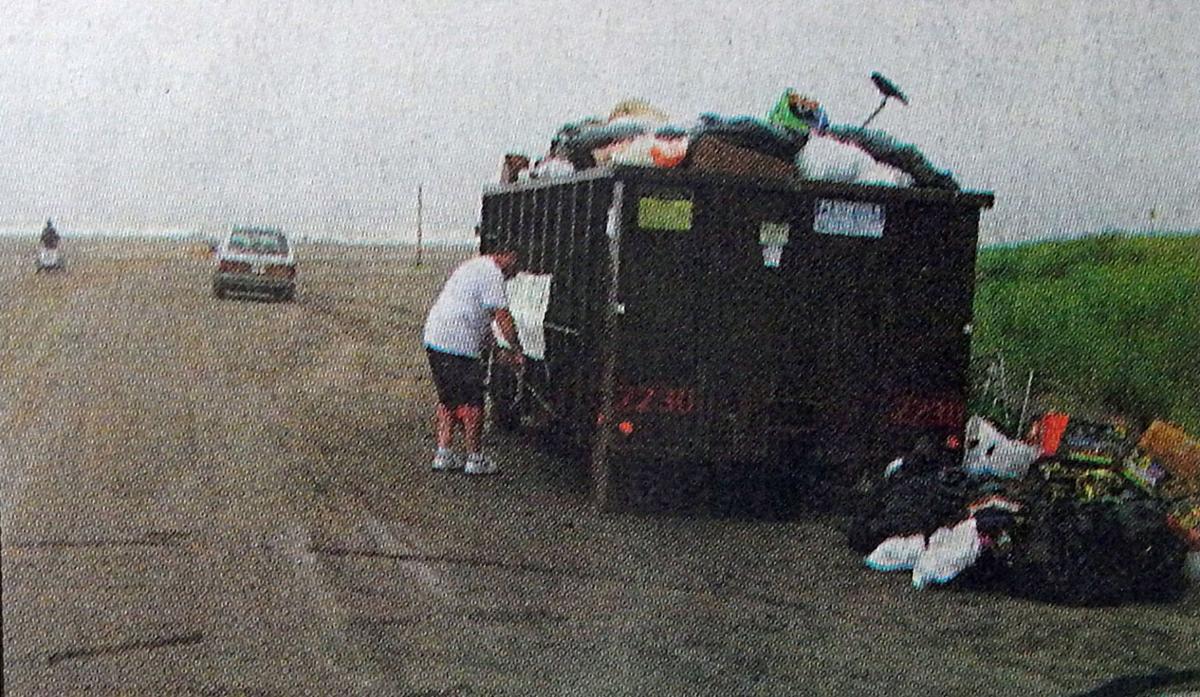 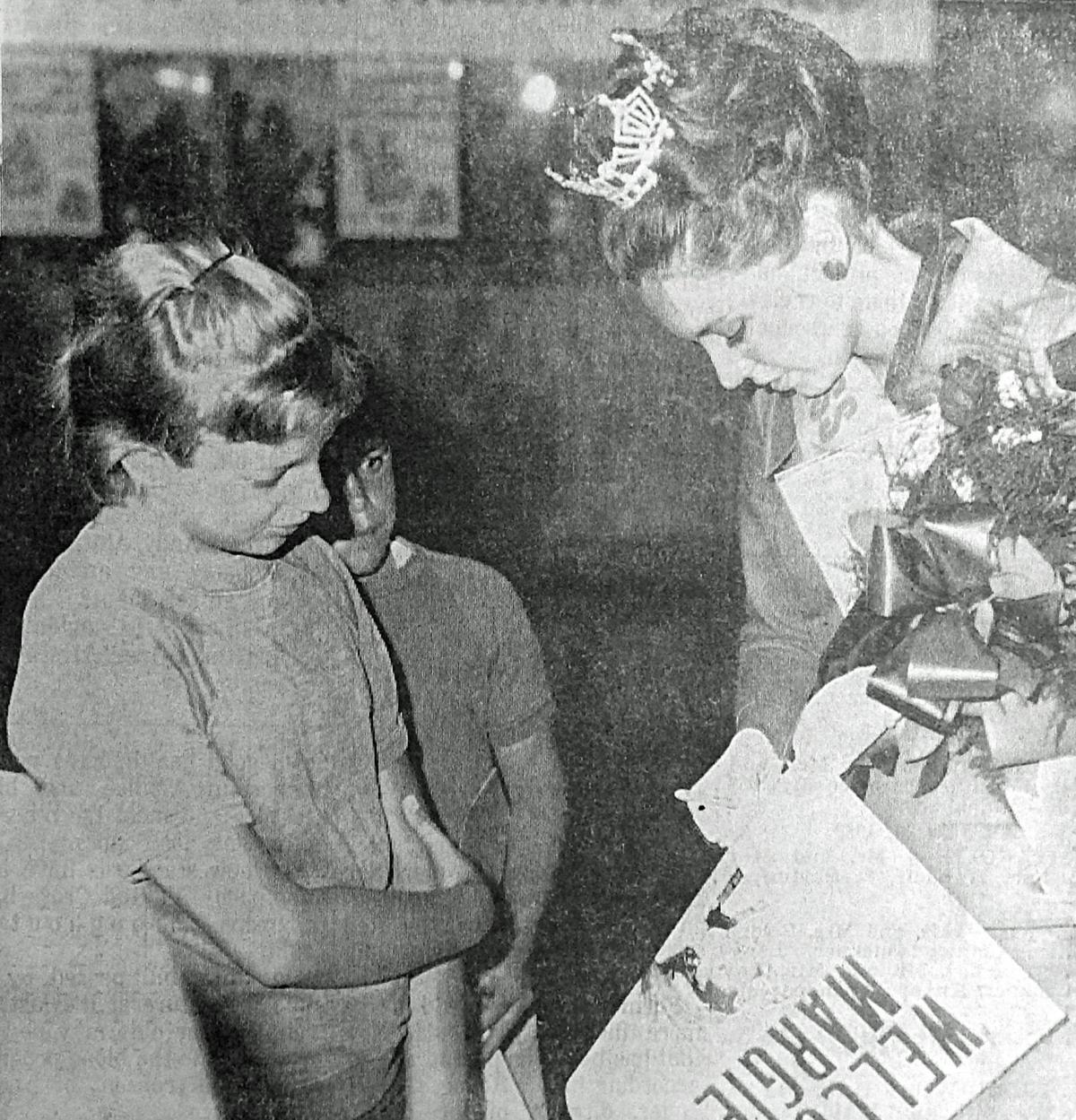 1969 — Miss Oregon Margie Huhta signs an autograph for an admirer. 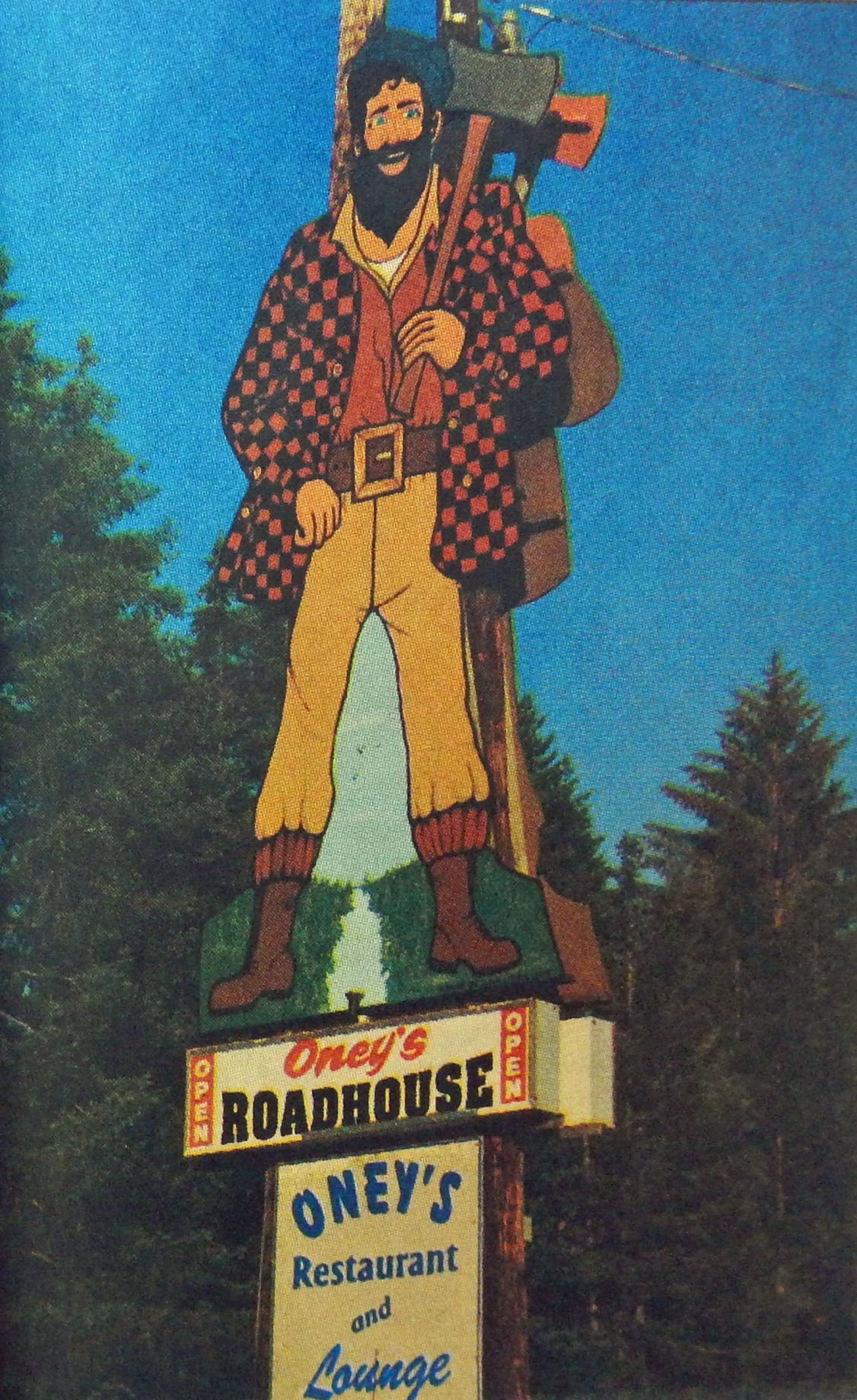 2009 — The iconic Oney’s sign on U.S. Highway 26 shows Paul Bunyan, wielding his ax. Although the sign was the only thing that remained after last year’s arson fire, it had to be touched up, too. 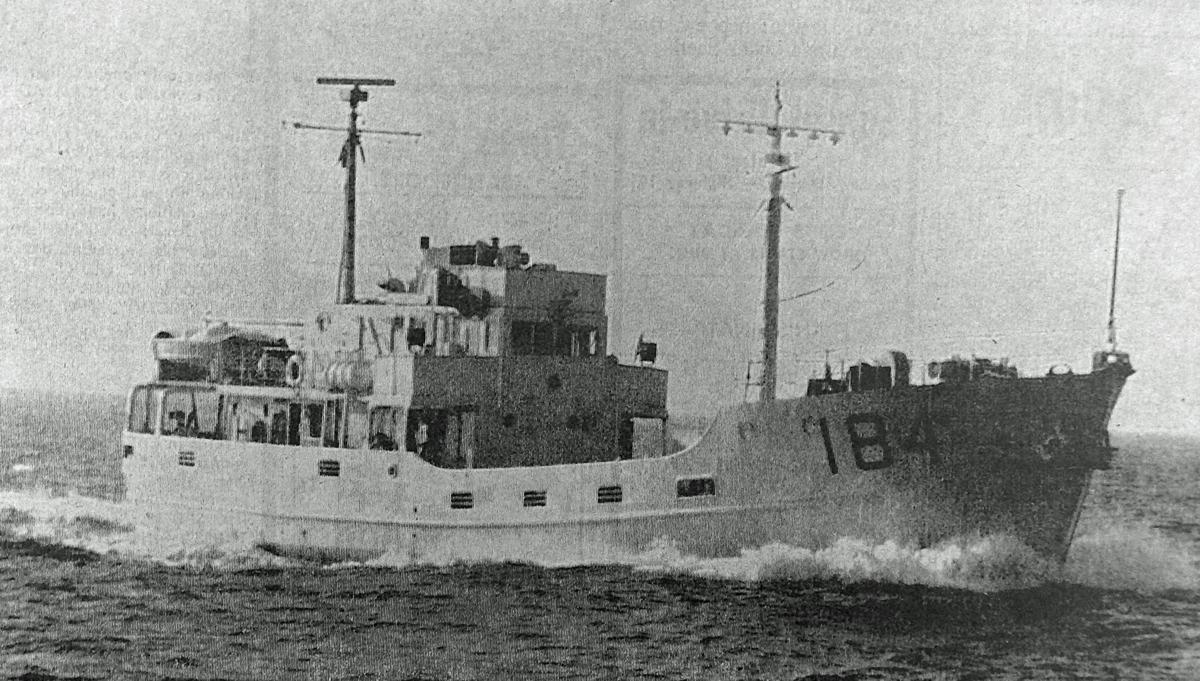 2009 — Reba Strickland, one of the first kids at Camp Rosenbaum years ago, hugs the founder, retired Brig. Gen Fred Rosenbaum, and tries to tell him just how much his camp changed her life.

1969 — Miss Oregon Margie Huhta signs an autograph for an admirer.

2009 — The iconic Oney’s sign on U.S. Highway 26 shows Paul Bunyan, wielding his ax. Although the sign was the only thing that remained after last year’s arson fire, it had to be touched up, too.

Past and present joined together Wednesday in Warrenton to honor the man whose camp has influenced the lives of roughly 6,500 Oregon children during the last 39 years.

The Garden of Gratitude at the Camp Rilea Armed Forces Training Facility in Warrenton was dedicated in honor of Brig. Gen. Fred M. Rosenbaum, 83, who founded Camp Rosenbaum at the facility in 1970 for “at-risk” youth ages nine to 11. More than 100 people marked the occasion.

There weren’t enough chairs at the ceremony and many people stood in a half-circle on the wet lawn outside the original Camp Rosenbaum clubhouse. Former Oregon governors Barbara Roberts and Vic Atiyeh gave speeches, as did Maj. Gen Raymond F. Rees, adjutant general for the Oregon National Guard, and Arnie Leppert, former camp director.

They spoke of Rosenbaum’s perseverance, his dedication, and his love.

IN ONE EAR — “So many volunteers at the July 5 beach cleanup reported they finally ‘just go down on my hands and knees to pick up all the small pieces’ that we decided to just call in that, wrote Ellen Anderson of the Grassroots Garbage Gang’s “Hands and Knees” community beach cleanup on the Long Beach (Washington) Peninsula.

“A total of approximately 600 volunteers swept the beach and initial reports have 18 tons of garbage from the beach that morning after a record crowd celebrated on Saturday night July 4 bonfires and fireworks,” Anderson added. “We had 16 ham radio operators to coordinate needs with resources, beach approach coordinators at every major approach, and a handful of general coordinators making it happen. Our sincere thanks to all!”

ELSIE — For many of the customers who attended Oney’s grand opening over the weekend, it was like coming home.

And owner Steve Pitkin was ready to welcome them back, with 1,000 oysters, 200 steaks and 100 pounds of ribs, plus drinks, live music and lots of memories.

Although the roadhouse had a “soft” opening over the July 4 weekend, the official open house occurred last weekend. Old friends, who hadn’t seen each other since the restaurant burned down May 7, 2008, hugged and caught up with each other’s lives.

“There was an empty spot here for a year,” said Herb Olstedt, whose family — from his great-grandmother to his sons — worked at the old Oney’s. “It’s good to get it back.”

Sometime during the weekend, glasses were raised in honor of Lenore “Oney” Camberg, who opened the restaurant on U.S. Highway 26 in 1938. The feisty restaurateur and the restaurant became mainstays in the community.

And what does the man on the street think of the man on the moon? Varied as the opinions are during an extemporaneous canvass, the consensus was always, first off, one of wonderment and awe.

Col. Arthur Fertig, veteran of World Wars I and II, Warrenton: “It is the most marvelous thing that ever happened to the world during my lifetime. I remember when Wilbur Wright made his first airplane flight. THAT was awesome enough. But this is even more so. I only wish that I could live another 60 years to witness what will happen next.”

Acting on a suggestion by an Astoria resident, Mayor Harry Steinbock has asked Rep. Wendell Wyatt, R-Ore., to see whether all or part of the lunar command ship Columbia could be obtained for an Astoria museum.

Steinbock said today that Joe Ewald, of Astoria, had made the suggestion to him because of Astoria’s identification with the Columbia River.

The lunar command ship was named Columbia because of that word’s attachment to the United States after the voyage of Christopher Columbus.

The most thrilling ride she ever took was Miss Oregon 1969’s tour of her home county Saturday, but not until Margie Huhta, with her jeweled crown and regal composure, reached Knappa crossroads did she lose her “cool.”

Tears coursed down the most beautiful face in Oregon as the Knappa girl saw the dense crowd of people assembled, cheering her arrival. The fire truck and telephone company trucks were emblazoned with “Welcome home Margie.” All along the roads leading into Knappa, children waved homemade banners, crowds cheered, horns blew and those working in fields and farmyards came running to cheer.

Slated to visit Astoria late in August as part of the 1969 Regatta fleet is the Canadian naval vessel HMCS Porte de la Reine.

It will be here with a number of other ships for the Aug. 21-24 festivities.

The craft was built at Victoria Machinery Depot Co. Ltd. and commissioned in October 1952.

The 457-ton gate vessel, originally designed to work harbor approach nets, or “gates” (submarine defense measures), was taken out of active service in 1956.

The state highway commission, members of the state and federal highway engineering staffs, Congressman James W. Mott — important member of the U.S. House of Representatives’ public roads committee — and others were due here today for start of a western Oregon tour checking on secondary highways and shaping up postwar plans to supplement a previous survey.

Activity in the processing of albacore tuna moved into high gear Monday and today among some lower Columbia canneries, as boats beat in from a north Pacific — described as “ideal” at present for the albacore hunt — loaded to the gunwales with the $325-a-ton blueblood of ocean fishing.

Two of the canneries, Columbia River Packers Association and Union Fishermen’s Co-op, said that average deliveries appeared to be in the vicinity of 6,000 to 8,000 pounds. New England Fish company reported one 11,000-pound delivery. One industry authority offered the opinion, although admittedly without confirmation, that Monday’s returns were as heavy as those during any comparable early-season period in the albacore picture, since it took on bright colors in 1939.

A message from the war department telling of the death of John Henry “Bim” Elfving, son of Mr. and Mrs, Henry Elfving of Astoria, was received here Monday night. The telegram, addressed to the former well-known Astoria boy’s wife, read:

“Regret to inform you that Pvt. John Henry Elfving was killed in action on July 7. Letter will follow.”

COPALIS, Wash. — Two Tahola Indians, Stanley Charlie and Sam Pickernell, are credited with the rescue of five Oregon and Washington fishermen whose boat sank about three-quarters of a mile west of Taholah, the Coast Guard announced today.

Using a dugout canoe, Charlie and Pickernell made three trips to the 80-foot drag fishing craft, a reconverted oil tanker, which had struck a rocky reef in dense fog Tuesday.

Astoria albacore packers, either already underway in the canning of tuna or ready to start their lines next week, today ran up the appeal for cannery labor and announced they would be unable to operate at any appreciable degree of efficiency unless the labor force is enlarged soon.

The packers pointed to existence of the Astoria playground system, which throughout the city is geared to handle youngsters under capable leadership while parents are employed at peak seasonal work here. They appealed to those in Astoria who in the past, and during the more recent labor crises, have volunteered for work in the canneries, at substantial wages — to permit the all-out production and processing of fish.

Five feminine aviation machinists are among the newest addition to the Tongue Point naval air station Wave detachment. All tell of their work with enthusiasm and interest lighting their eyes, although this is their first duty and they have been here only from three to six weeks.