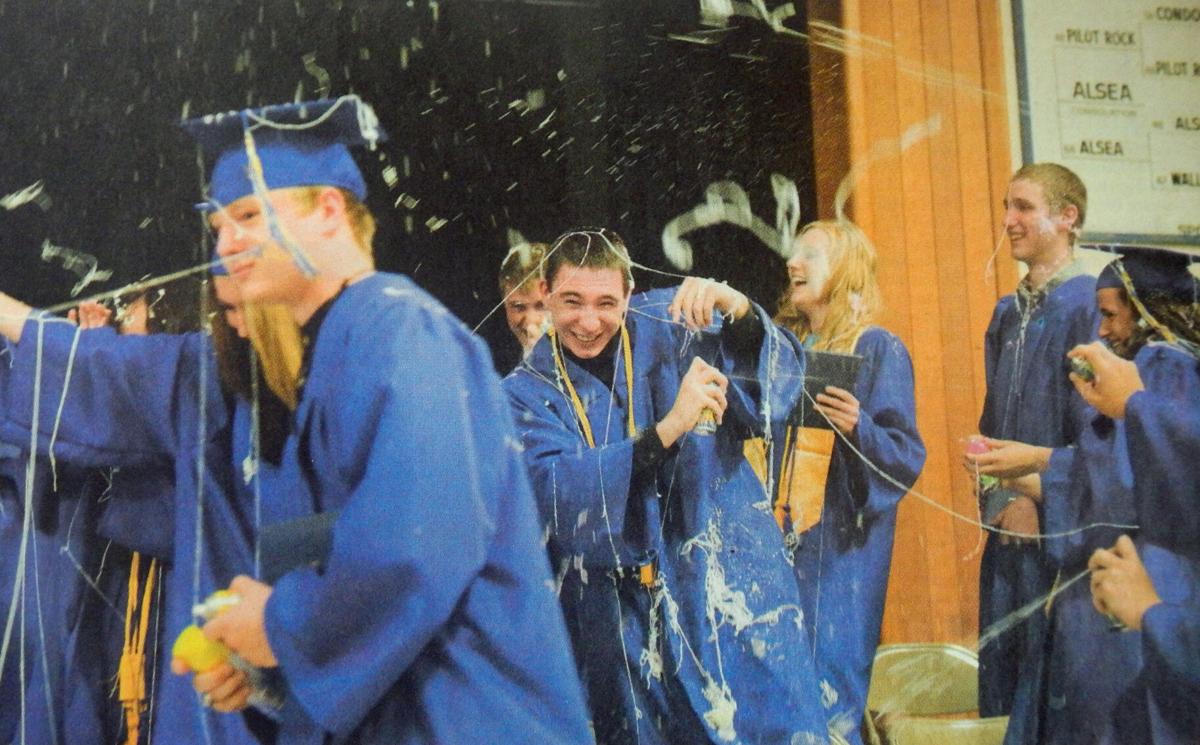 Roland Johansen is caught in the center of a silly string storm as the 36-member Class of 2011 celebrates the conclusion of their commencement ceremony at Knappa High School. 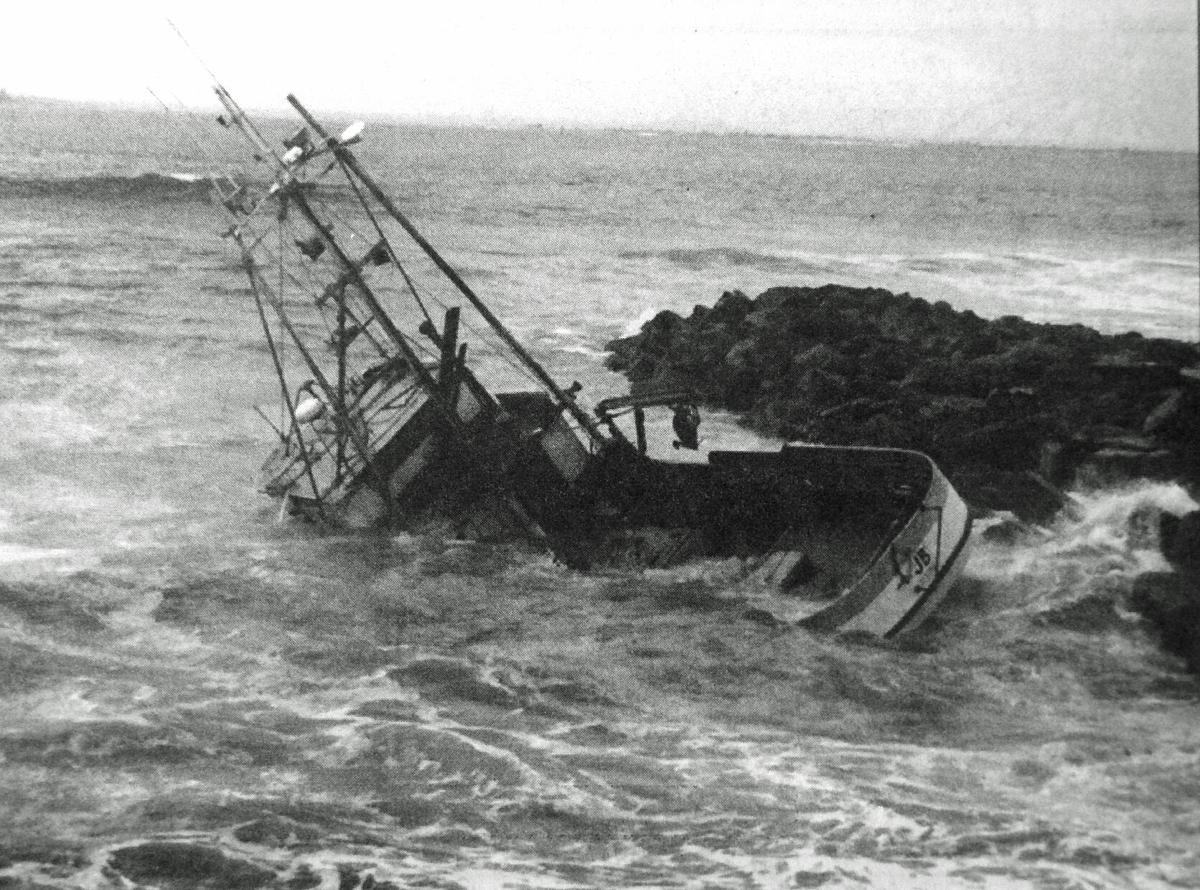 The fishing vessel JB ran aground near the south jetty in Grays Harbor in 2011. 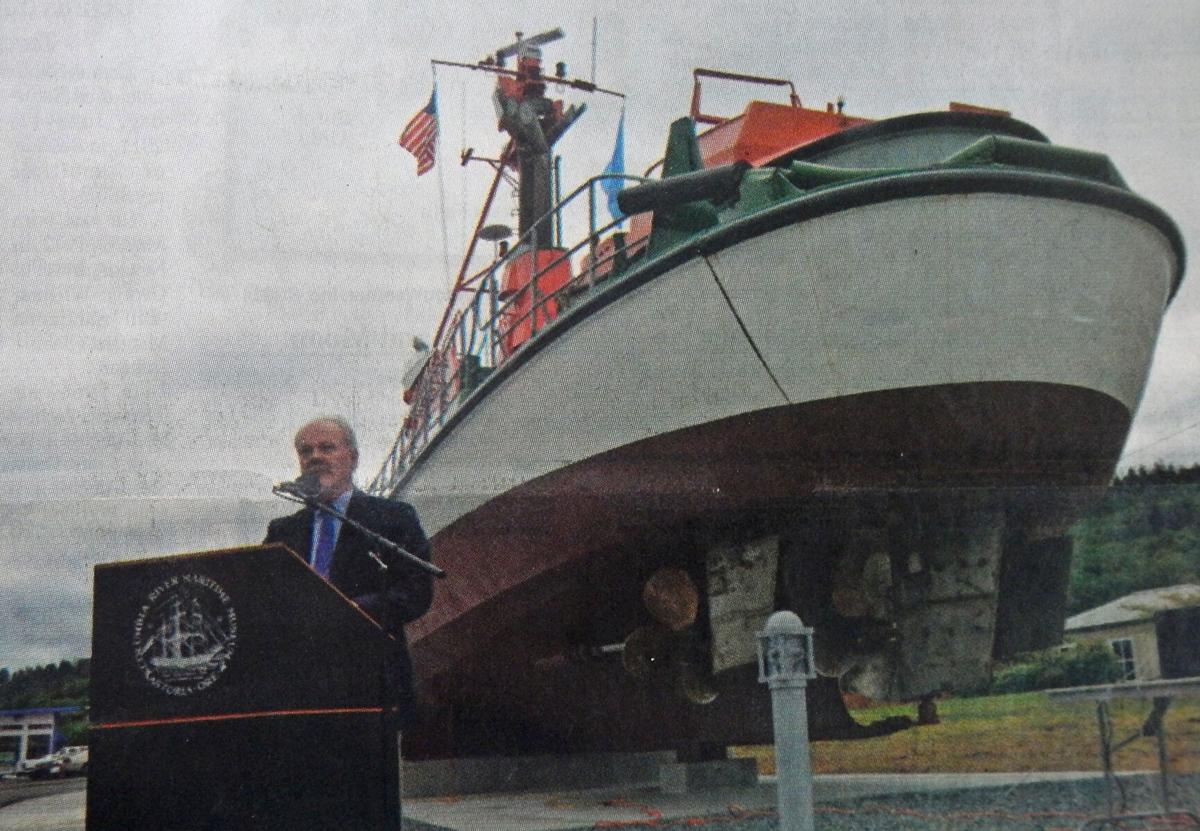 Michael Haglund, an author, attorney and member of the Columbia River Maritime Museum board, speaks at the Peacock’s dedication ceremony in 2011. 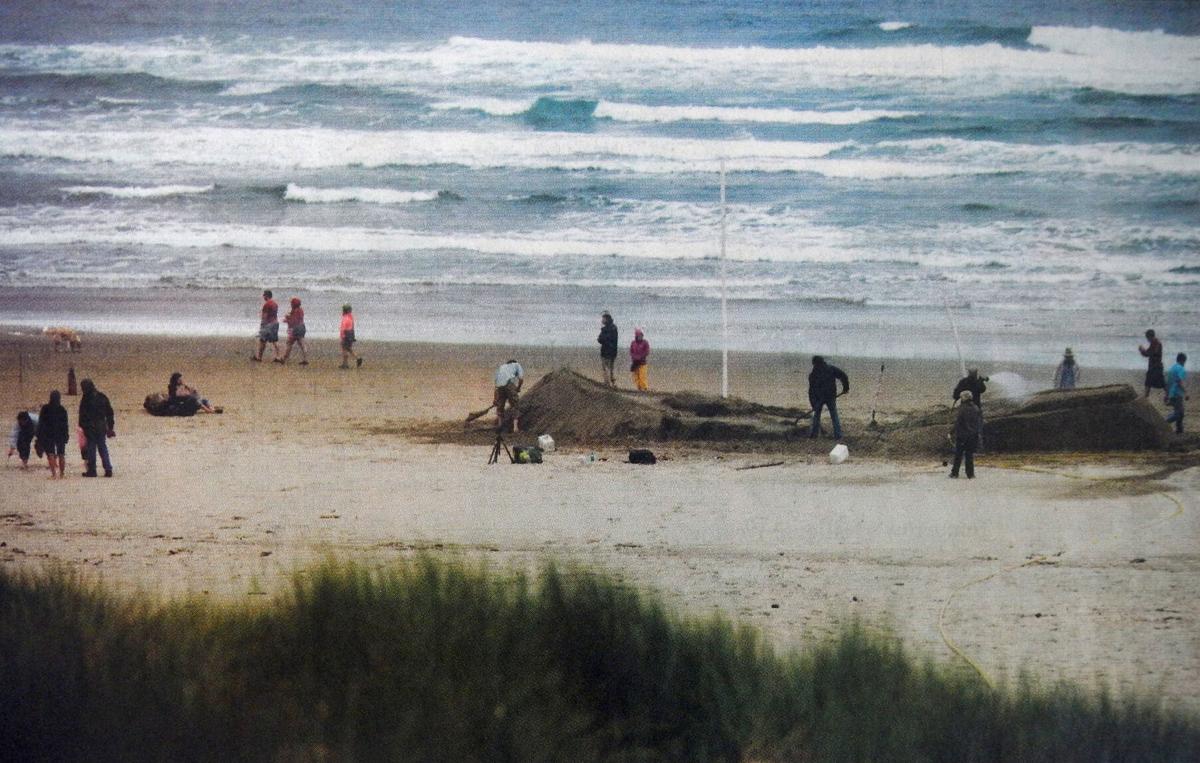 A shipwreck sandcastle begins to take shape in Cannon Beach during the lead up to the sandcastle contest in 2011. 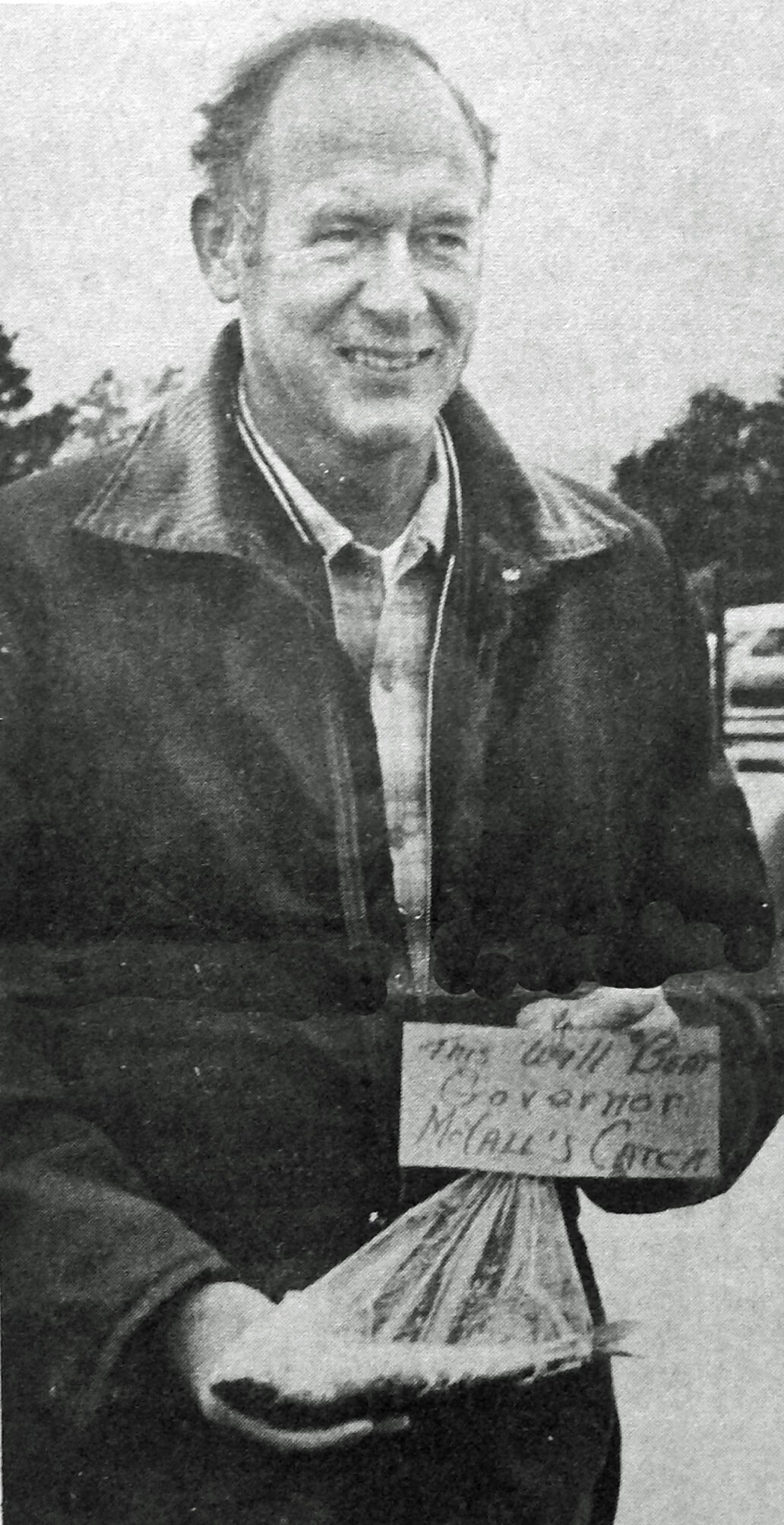 Idaho Gov. Cecil Andrus received a sucker as a present from Bob Wilson, Warrenton boat basin operator, when he landed from a fruitless fishing trip in 1971. 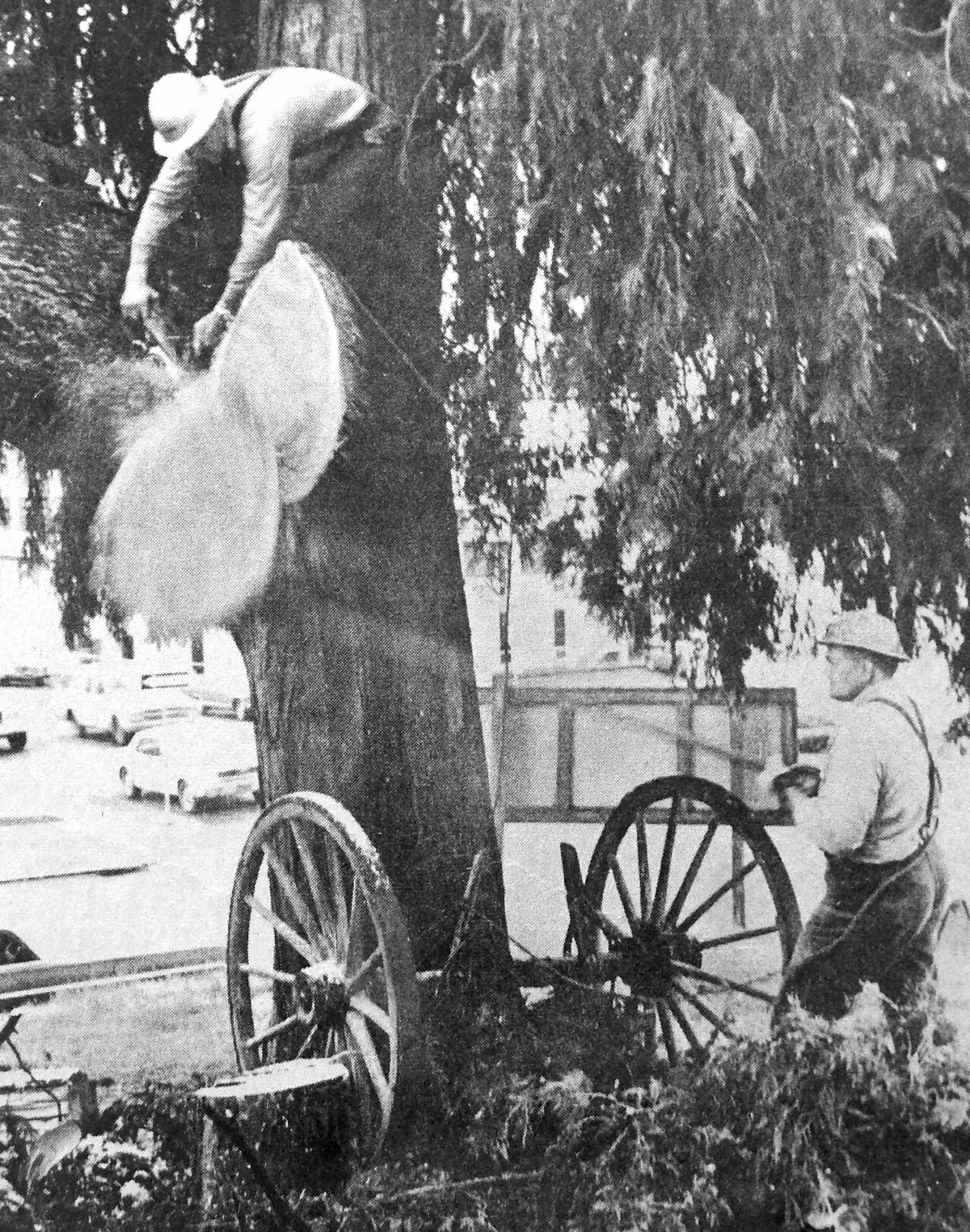 Clatsop County workers remove wood from the grounds of the Flavel House in 1971. 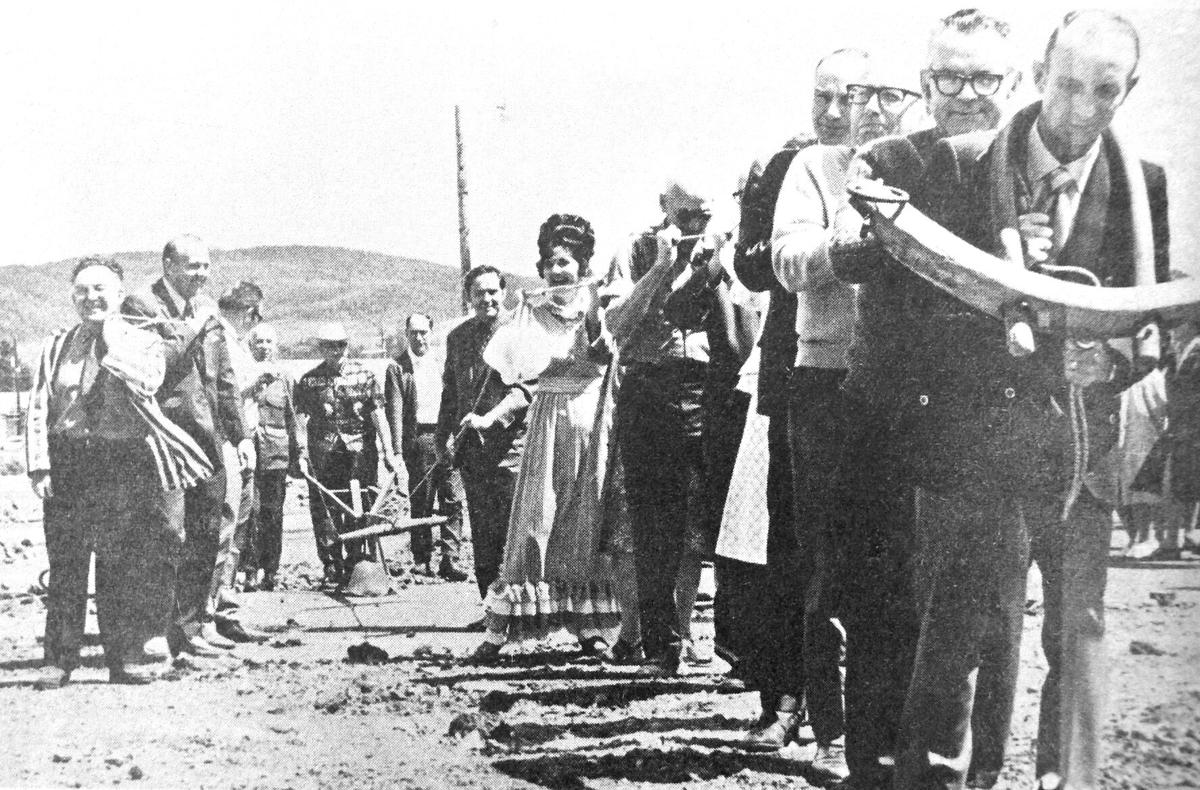 Officials at the groundbreaking for what would become the Seaside Civic and Convention Center in 1971. 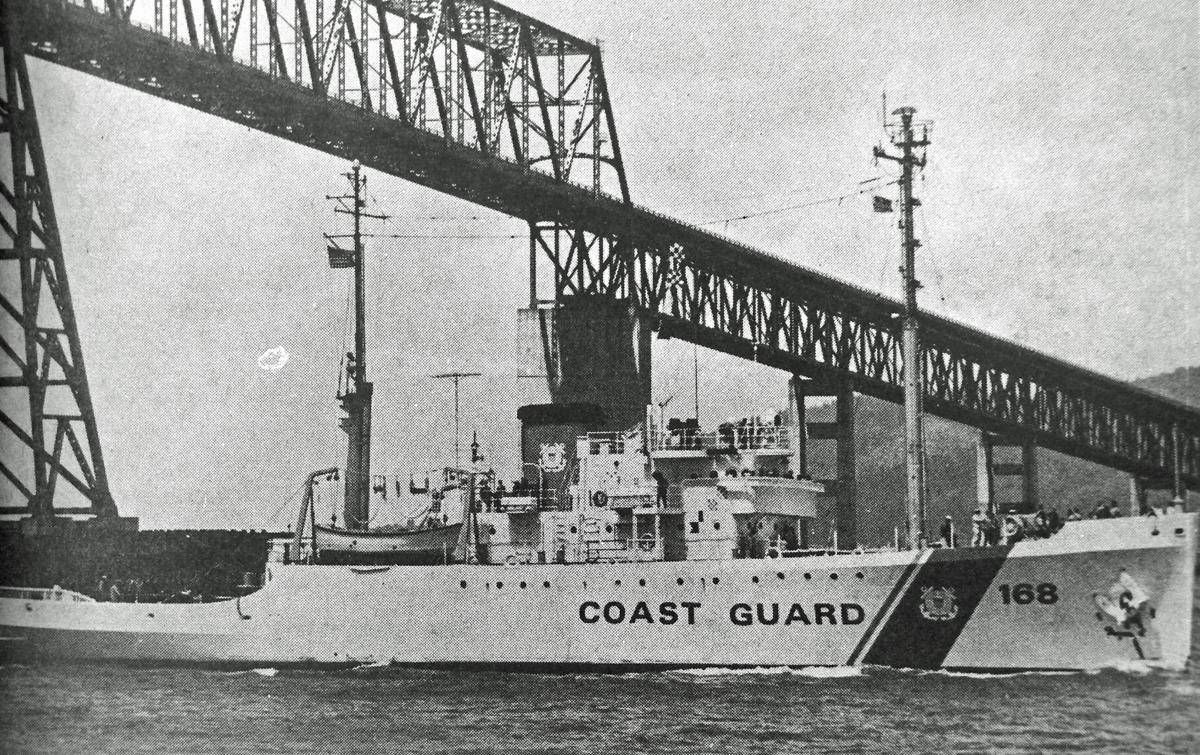 The U.S. Coast Guard cutter Yocona in Astoria in 1971.

Roland Johansen is caught in the center of a silly string storm as the 36-member Class of 2011 celebrates the conclusion of their commencement ceremony at Knappa High School.

The fishing vessel JB ran aground near the south jetty in Grays Harbor in 2011.

Michael Haglund, an author, attorney and member of the Columbia River Maritime Museum board, speaks at the Peacock’s dedication ceremony in 2011.

A shipwreck sandcastle begins to take shape in Cannon Beach during the lead up to the sandcastle contest in 2011.

Idaho Gov. Cecil Andrus received a sucker as a present from Bob Wilson, Warrenton boat basin operator, when he landed from a fruitless fishing trip in 1971.

Clatsop County workers remove wood from the grounds of the Flavel House in 1971.

Officials at the groundbreaking for what would become the Seaside Civic and Convention Center in 1971.

The U.S. Coast Guard cutter Yocona in Astoria in 1971.

They walked in together, a tight-knit group 35 strong.

They brought their 13 years at the school to an end with an emotional ceremony — filled with ritual and at the end, a frenzied burst of silly string.

It was a moment to savor.

Knappa’s 2011 graduates were joined by family, friends and the community to celebrate their success together — before branching out on their own.

They had been there for each other, and have achieved great things as a group, senior class president Anthony Brockey told the crowd gathered at the formal ceremony.

But, despite the state championships, academic awards and milestones they all passed, their most important moment so far was this one, he said.

“Our greatest achievement of all is standing before you now,” Brockey said.

Some people toss balsa wood planes from the top of the Astoria Column.

Other people toss themselves.

Astoria police were on the hunt Monday morning for a paraglider pilot who launched himself off the viewing platform of the 125-foot-tall landmark.

GRAYS HARBOR — The U.S. Coast Guard rescued two crewmen from the fishing vessel JB, a 48-foot boat, after it ran aground and sank near the south jetty at Grays Harbor.

The vessel was pushed into the heavy surf where divers with Ballard Diving & Salvage worked to secure the vessel and remove remaining fuel and oils from the boat as it moved close to the jetty rocks.

The Columbia River Maritime Museum dedicated the bar pilot boat Peacock and opened up the old Astoria Train Depot to visitors on Saturday.

Sam Johnson, the museum’s executive director, was among leaders of the event sharing details with visitors.

The Peacock, built in 1964, saw 33 years of service, ferrying bar pilots to and from more than 120,000 commercial ships. It was donated to the museum in 1999 but was only just put on display at the east corner of the museum parking lot last October.

CANNON BEACH — A ship wrecked on the city’s shores Wednesday. But those who were there were having too much fun to be concerned.

In fact, the only fear they had was that the scene wouldn’t look just right.

City councilors Sam Steidel and Wendy Higgins headed to the location. Photographer George Vetter brought his camera. Others joined them. At one time, 25 people were on the beach, all working on the shipwreck.

And work they did, to complete their sandcastle sculpture in time before the waves would wash it away.

It was the day of the community build of a sand sculpture to remind locals and visitors of the annual Sandcastle Day.

The worst June day in many years spoiled the fishing for five boatloads of anglers, including Gov. Cecil Andrus, of Idaho, and Gov. Tom McCall, of Oregon. No one caught a fish.

Not only did it rain spasmodically all day long, but there was a strong southwest wind and the bar was rough. It was so bad that some commercial trollers did not go out.

The Warrenton charter boat Gay Lady, carrying Andrus and his party, made it across the bar, but no one managed to land a fish.

“It seemed as though sometimes I was trying to fish uphill,” Andrus said. He seemed to enjoy his experience, however, and was philosophical about the weather conditions.

McCall reported a wet and fruitless voyage. His boat, the Thunderbird, piloted by Jim Campbell, of Astoria, did not venture across the bar, but fished around the river mouth for several hours before heading for port.

Andrus was awarded the trophy put up for the best-fishing governor because he got across the bar while McCall didn’t.

Astoria’s Planning Commission listened on Tuesday night to many of the same comments and complaints on the proposed new zoning ordinance.

C.J. McElhany made a new proposal to the commission: that the ordinance require at least two off-street parking spaces per residence, rather than the one required now. He said that with so many families having more than one vehicle, plus boats and trailers, that parts of Astoria had severe parking problems. He said narrow Glasgow Avenue can be particularly hard to negotiate with many vehicles parked on the streets.

SEASIDE — The civic-convention-recreation center was officially recognized as a “dream about to come true” in ground breaking ceremonies on Wednesday.

A crowd gathered to watch the proceedings, which featured members of the Clatsop County Board of Commissioners and chamber of commerce.

The Yocona, operating out of Kodiak, Alaska, will work two primary seas — the eastern Bering Sea and Bristol Bay in one, and the salmon abstention line, off the Aleutian Islands.

Most of the traffic carried by ferries on Sunday were bound from Megler, Washington, to Astoria, according to Floyd H. Simon, state superintendent of local ferries.

During the rush late in the day, cars occasionally had to wait a little more than an hour.

A new tuna fish canning operation, which will keep the Van Camp company’s cannery busy on a year-round basis, was announced today by Bill Gillis, local manager for Van Camp, and W.J. Grinnan, sales manager, who were in Astoria from the Van Camp head office in Terminal Island, California.

Van Camp’s cannery will process yellowfin tuna shipped from Costa Rica and will operate on as close to a 12-months-a-year basis as possible. Year-round employment will be provided to a minimum of 250 people instead of the present three-months-a-year operation at the cannery.

Francis Harley, former mayor of Astoria and one of the old town’s best known citizens, has come and gone on what he said may be his last visit to the community. Harley is 76 years old. The familiar short red whiskers on his kindly face are snowy white, but in many ways he is still the same man another generation of Astorians knew well.

That Astoria is still the “city of destiny” on the West Coast to the former mayor is very evident. If he were 30 years younger, he said, Astoria would once again be his home port and nothing could stop him from assisting in bringing the big developments to Astoria the city so richly merits by virtue of location and natural resources.

Drydocks and shipping facilities for Astoria were Harley’s rallying war cry 30 years ago as he stumped the state and nation for developments of the lower Columbia area. There is still need for the old campaign to go on, he said, though a great deal has been accomplished along the lines he advocated years ago.

Rebuilding of Astoria in accordance with proper municipal planning would be fairly easy and not particularly burdensome financially upon the citizens if it were done on a long-term basis looking a half century ahead, according to Ebba Wicks, local architect, who returned after spending a year and a half studying in the Academy of Art near Detroit, which is operated by Eliel Saarinen, world-famous Finnish architect.

Wicks was one of a small group of students there and worked on a plan for a possible future Astoria during most of her year and a half at the school.

As part of her work, she constructed a scale relief model of the Astoria area from John Day to Warrenton on which is laid out a plan for what Astoria could become a half century hence under a city planning program.