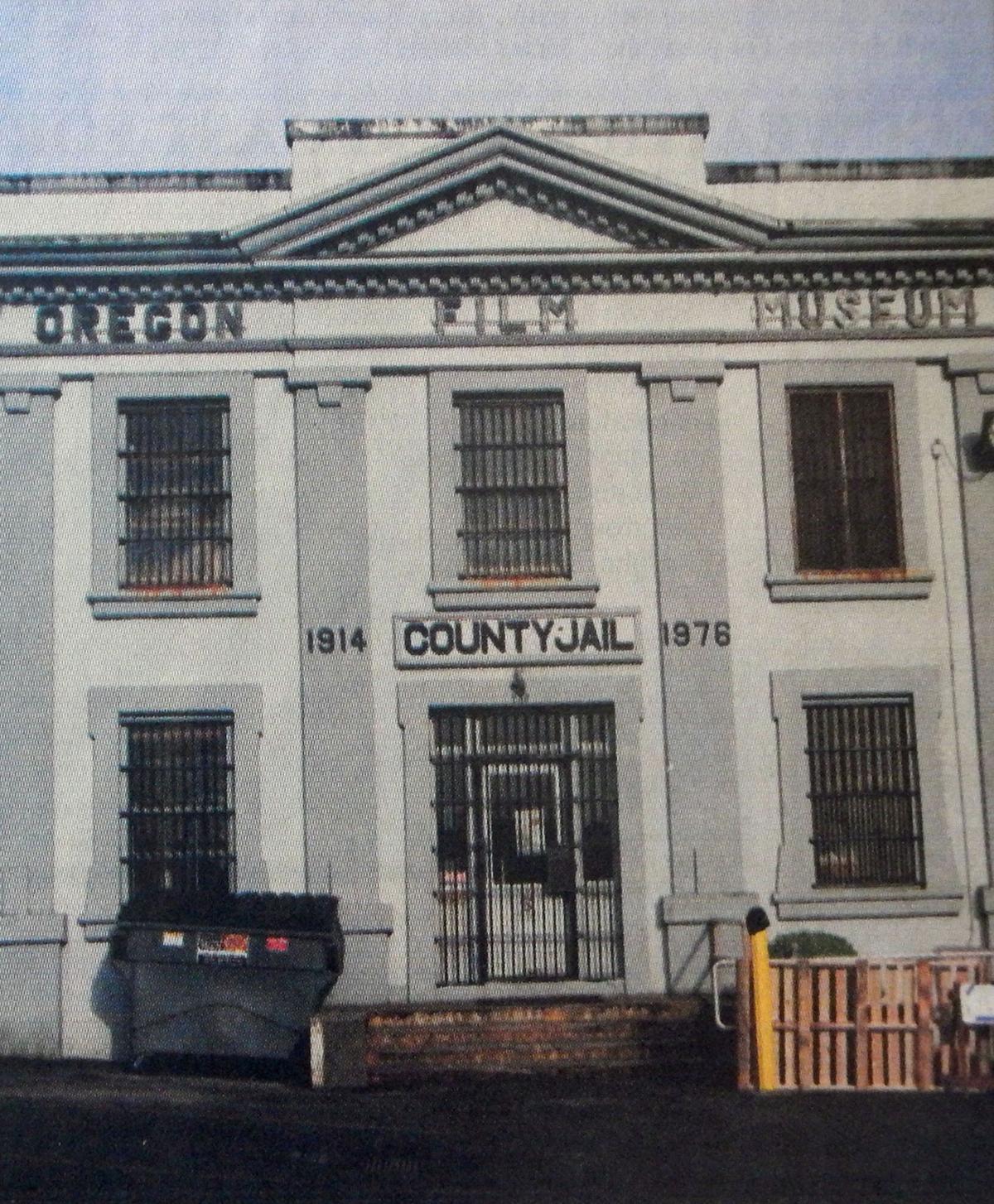 Housed in the historic Clatsop County Jail is the Oregon Film Museum in 2010. 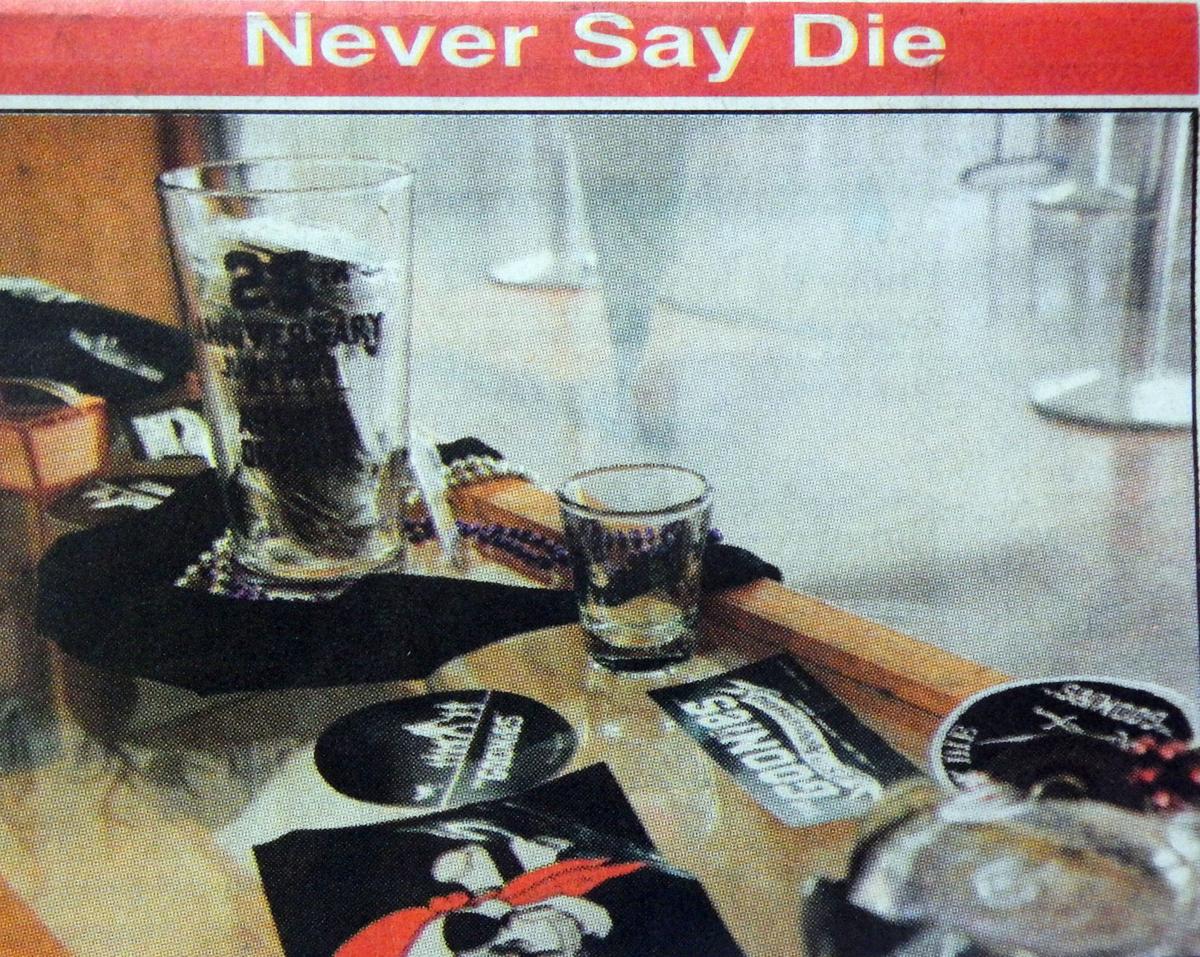 The Goon Docks store at 15th and Marine Drive in Astoria will serve as the event headquarters, selling commemorative merchandise and tickets to events in 2010. 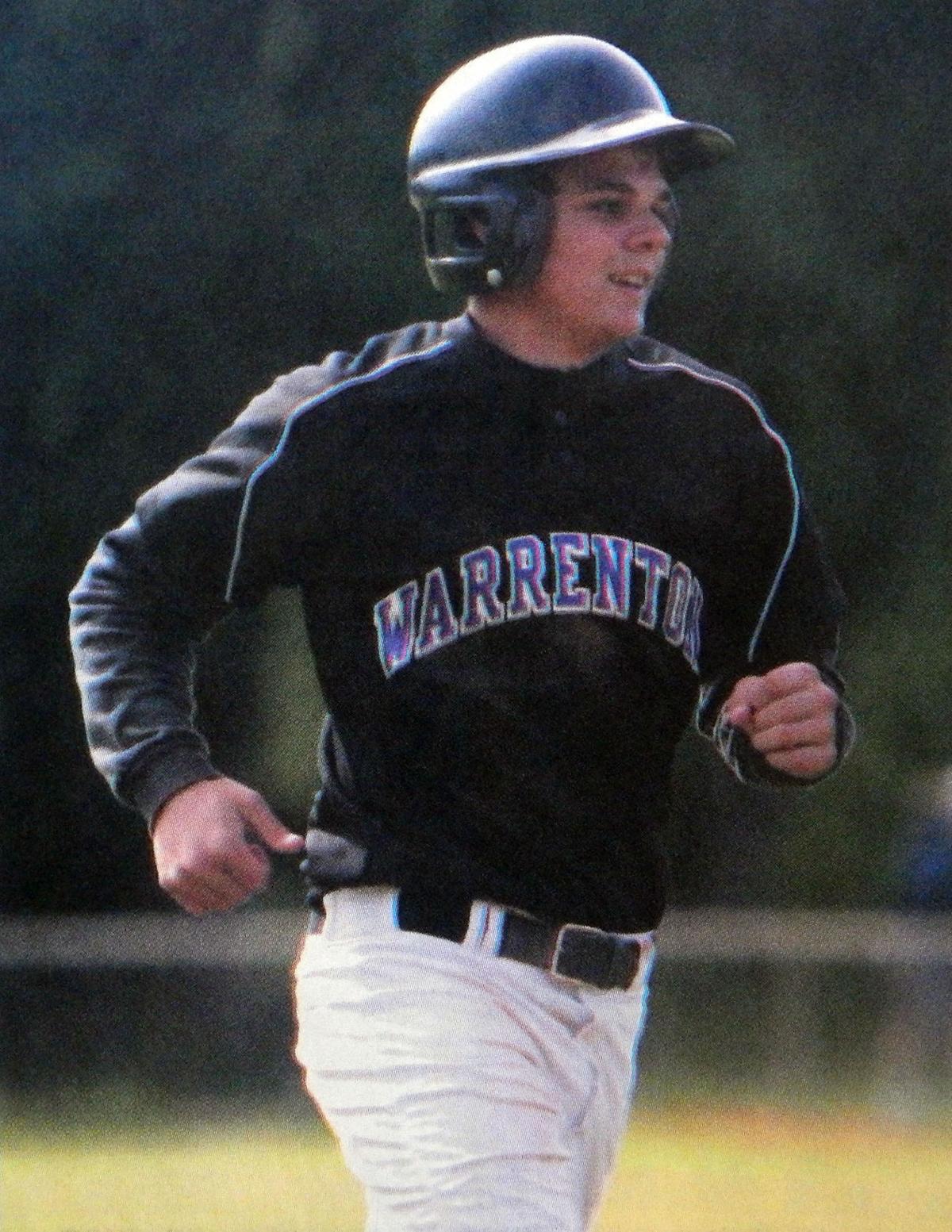 Tom McFadden, circling the bases following a home run in Warrenton’s final game, was selected first-team all-league in 2010, along with three teammates. 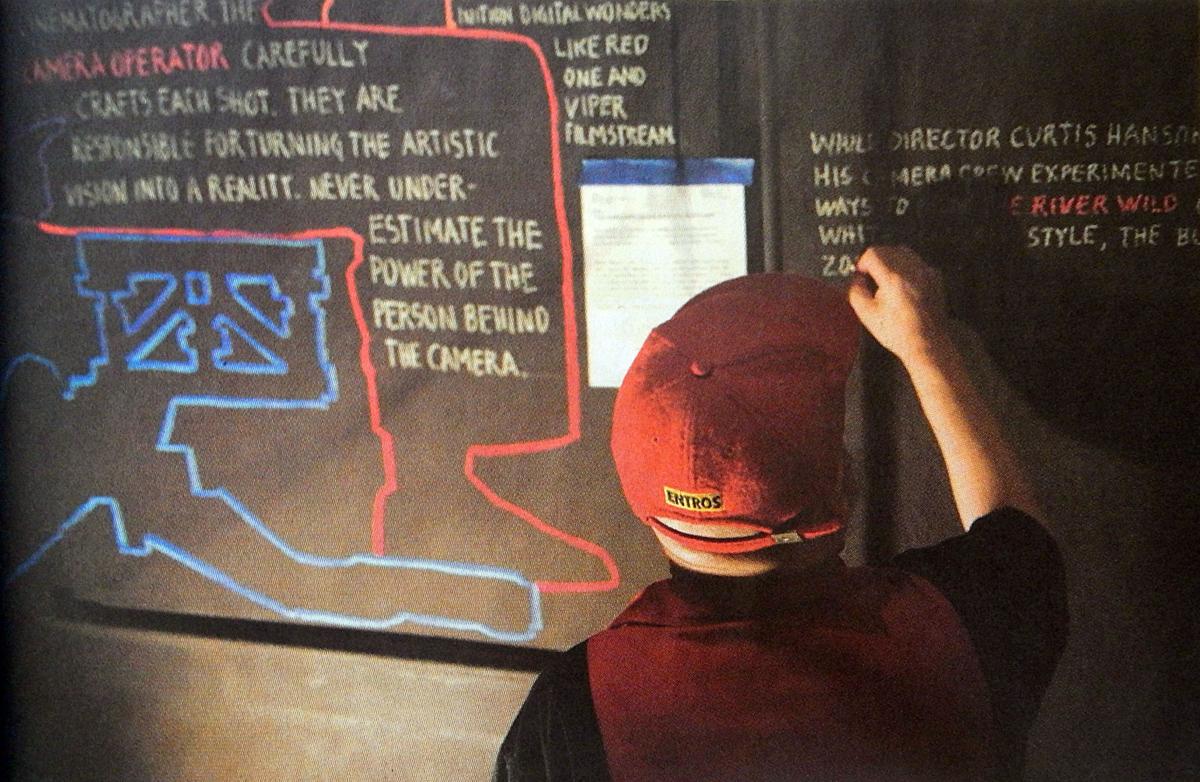 Ray Freeman, an experience designer with Seattle-based Interplay, uses chalk to add quotes, anecdotes and role descriptions from actors in Oregon films at the Oregon Film Museum in 2010. 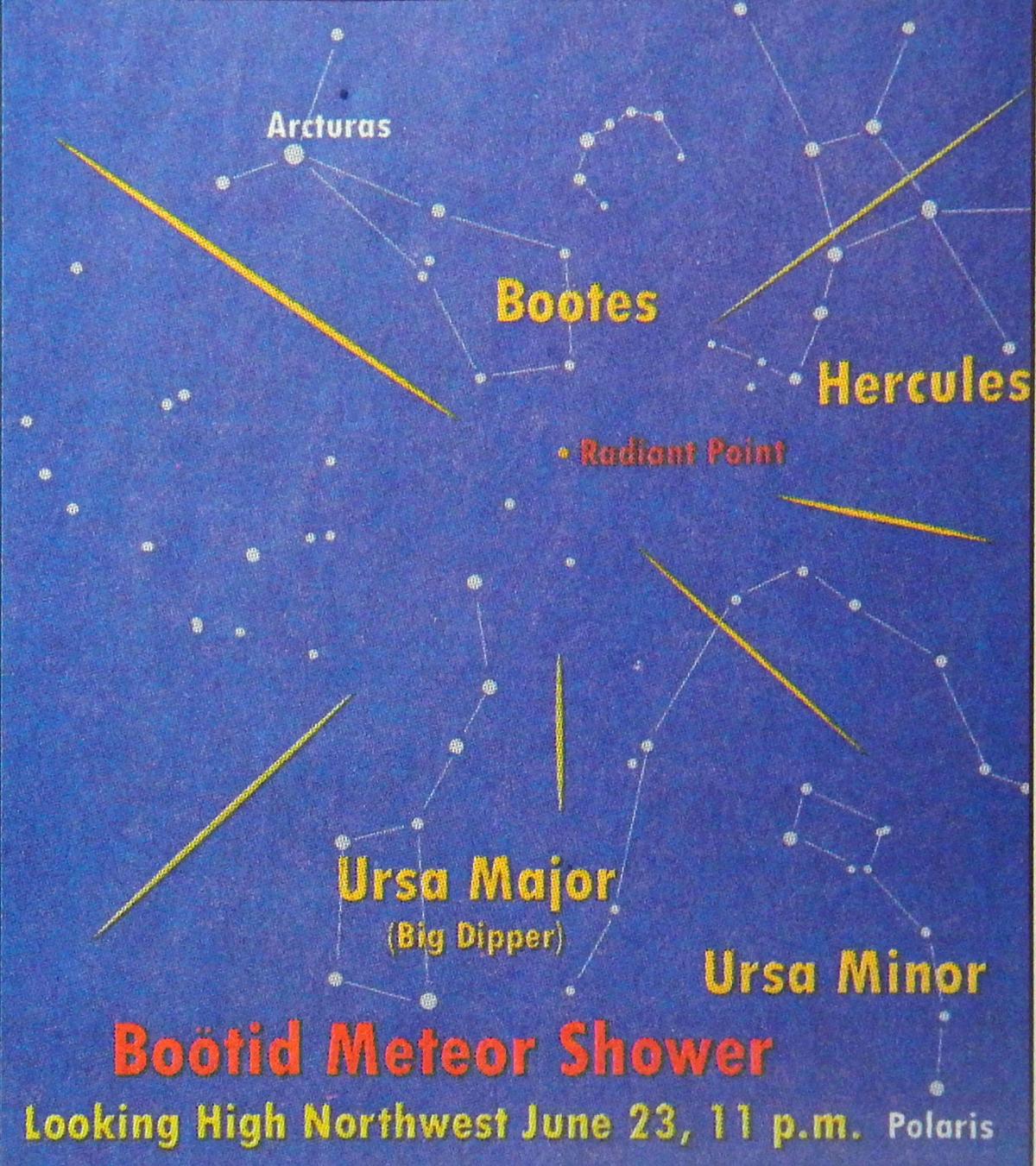 Housed in the historic Clatsop County Jail is the Oregon Film Museum in 2010.

The Goon Docks store at 15th and Marine Drive in Astoria will serve as the event headquarters, selling commemorative merchandise and tickets to events in 2010.

Tom McFadden, circling the bases following a home run in Warrenton’s final game, was selected first-team all-league in 2010, along with three teammates.

Ray Freeman, an experience designer with Seattle-based Interplay, uses chalk to add quotes, anecdotes and role descriptions from actors in Oregon films at the Oregon Film Museum in 2010.

McAndrew Burns isn’t nervous about the swiftly-approaching grand opening of the Oregon Film Museum. He just sometimes forgets to breathe.

There are less than two days left.

The museum’s website, www.oregonfilmmuseum.com, is up. The only thing currently on display, though, is a countdown clock to the grand opening at 9 a.m. Saturday.

“The countdown didn’t stress me out until a day or so ago,” said Burns, executive director of the Clatsop County Historical Society.

But Burns and his crew are confident they’ll have a good museum to show people when the ribbon is cut and the doors are flung open.

Hey Goonies, “Mikey Walsh” is coming to town this weekend.

Actor Sean Astin, whose movie credits include “The Goonies” (1985) and “The Lord of the Rings” trilogy (2001-2003), will be in Astoria Sunday to watch his friend and Goonies co-star Corey Feldman perform onstage with Feldman’s band the Truth Movement. Goonies director Richard Donner is also expected to be in attendance.

The concert is a part of the 25th Goonies anniversary celebration happening this entire weekend.

There are a lot of unknowns about this weekend’s Goonies 25th anniversary celebration.

Where will the movie stars be staying?

Will there be any more last-minute additions to the celebrity roster?

One thing’s for sure, however. Goonies fans are headed to Astoria in droves.

While no one knows yet just how many people are coming, the Astoria-Warrenton Area Chamber of Commerce and Astoria businesses are ready for them.

Local businesses are using the opportunity to cater to the unique needs of the masses in Astoria this weekend — creating an economy with a four-day shelf life.

And at least two other developers are working on retail spaces for other businesses eyeing Warrenton, including discount groceries.

Plans for a retail complex next to Home Depot are coming together after years of delays.

A state bridge paint inspector has been accused of accepting money from a painting contractor in exchange for giving a less-than-critical report on the firm’s work on the Astoria Bridge.

Richard Johnson, 43, of Beaverton, was arraigned Friday in Clatsop County Circuit Court, Astoria, and is to appear in the same court Friday at which time he may request a preliminary investigation.

Johnson is accused in a state police report of soliciting funds from the Klaas Bros. Painting contracting firm, Los Angeles, for assurance that Johnson’s inspection report of the firm’s job on the Astoria Bridge wouldn’t be overly critical.

Seaside, Cannon Beach, Hammond and Fort Stevens State Park were inundated with tourists and vacationers this weekend as Memorial Day marked the opening of the summer season there.

The Oregon Highway Commission decided today to put its plan to ban cars from many ocean beaches into effect June 15.

The commission modified earlier proposals to keep cars off the beaches, but in general the vehicles will be banned from about half the length of the Oregon Coast.

Annexation of the Blue Ridge area to Astoria will be delayed because of legal problems, City Manager Dale Curry told the City Council Monday night.

Commenting at a public hearing on the annexation, requested by Blue Ridge residents, Curry said that among the problems involved were street right-of-way and easements. He told the council in a session before the meeting the situation was complicated by the fact the federal government retained some interest in the condominium development along with two private absentee owners and the condominium residents themselves.

Curry said today also the community building at Blue Ridge and some rights-of-way are in common ownership.

Work of treating the forest area near Cannon Beach infested with hemlock looper is now underway. The first area to be treated near the Necanicum River is to be sprayed from the air with DDT, the new insecticide used with such great results by the Army forces.

Gifts and sample parcels weighing up to 11 pounds may now be sent to liberated persons in the Philippine islands by families and friends in the United States, according to word received by James S. Hogg, prisoner of war consultant for the Clatsop County Red Cross chapter.

Three Astoria boys were among 87 discharged from the Army under various provisions of the new demobilization program, officials of the Fort Lewis separation center announced today.

Gyro Field is being groomed, trimmed and dolled up this week by Jerry McCallister, city street, water and “sports” factotum, in anticipation of resumption of baseball there Sunday, when the U.S. Navy Bluejackets square off against the Army from Fort Stevens at 12 p.m.

Eight range structures have been erected in the Columbia River by the U.S. Coast Guard, marking four ranges for assistance of river craft above the upper entrance to Celilo Canal, the Coast Guard announced today.

In the lower Columbia, the Warrior Rock fog signal has been discontinued until Sept. 1.

Three film and radio stars will visit patients of the Astoria naval hospital late this month and in early July, the Navy announced today.

The screen star, Shirley Temple, with her mother and a studio representative, will visit the hospital June 23 and 24 and will be brought here by car from Portland. The radio comics, George Burns and Gracie Allen, will be at the hospital about July 1, having scheduled plane reservations north for the trip. There is a possibility that Burns and Allen will broadcast their weekly show from the hospital’s stage.

Miss Temple will not appear in a formal program, but will visit the men in the many wards of the big hospital, and a dance may be arranged in her honor.

WASHINGTON — Food price and rationing controls can be lifted quickly after the Japanese war is won — within a year if victory comes that soon, price chief Chester Bowles said today.

Bowles also said gasoline rationing would end with the end of the Japanese war.