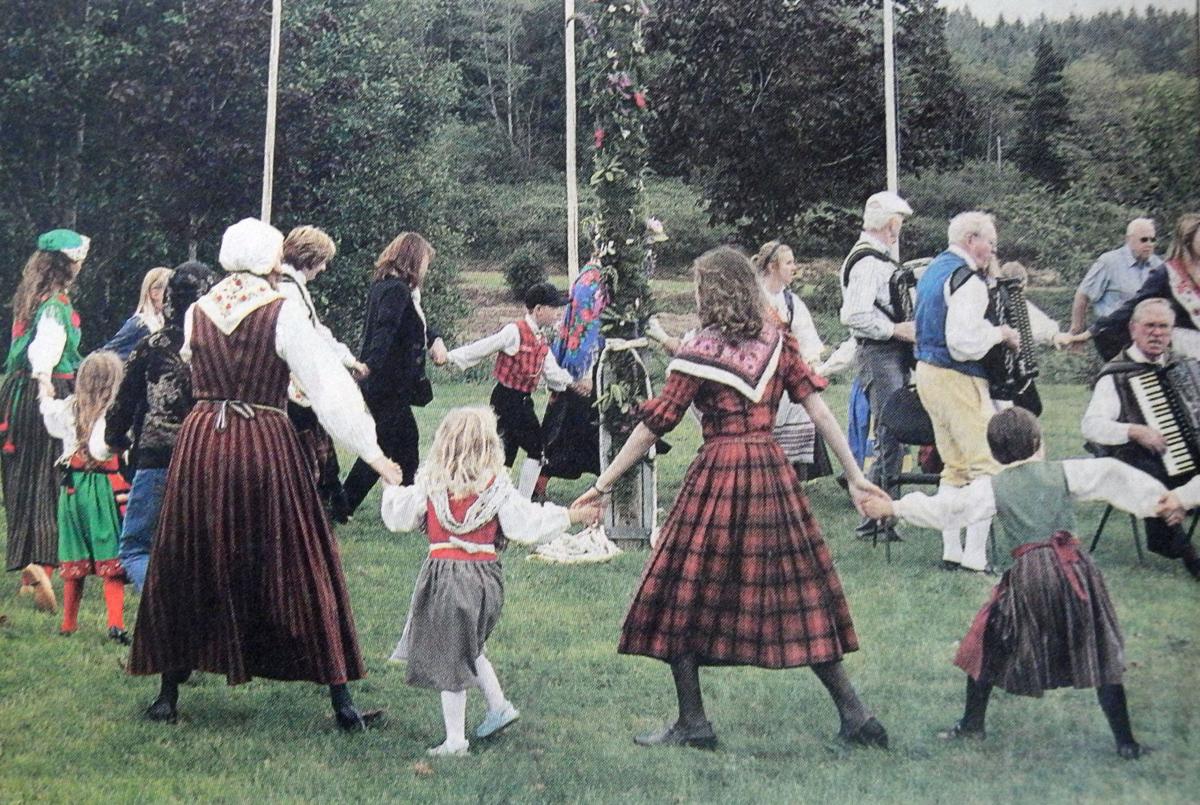 Dancing around the maypole is one of the revered traditions of the Astoria Scandinavian Midsummer Festival in 2010. 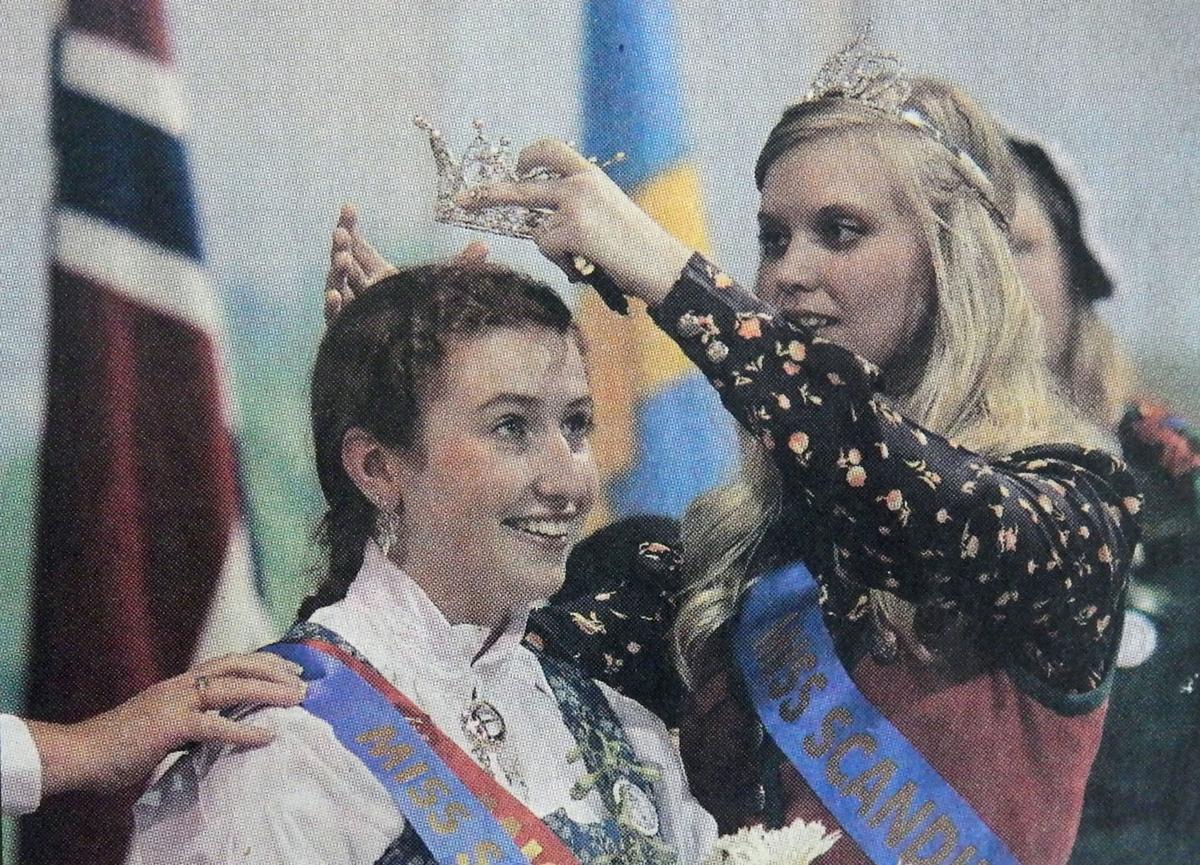 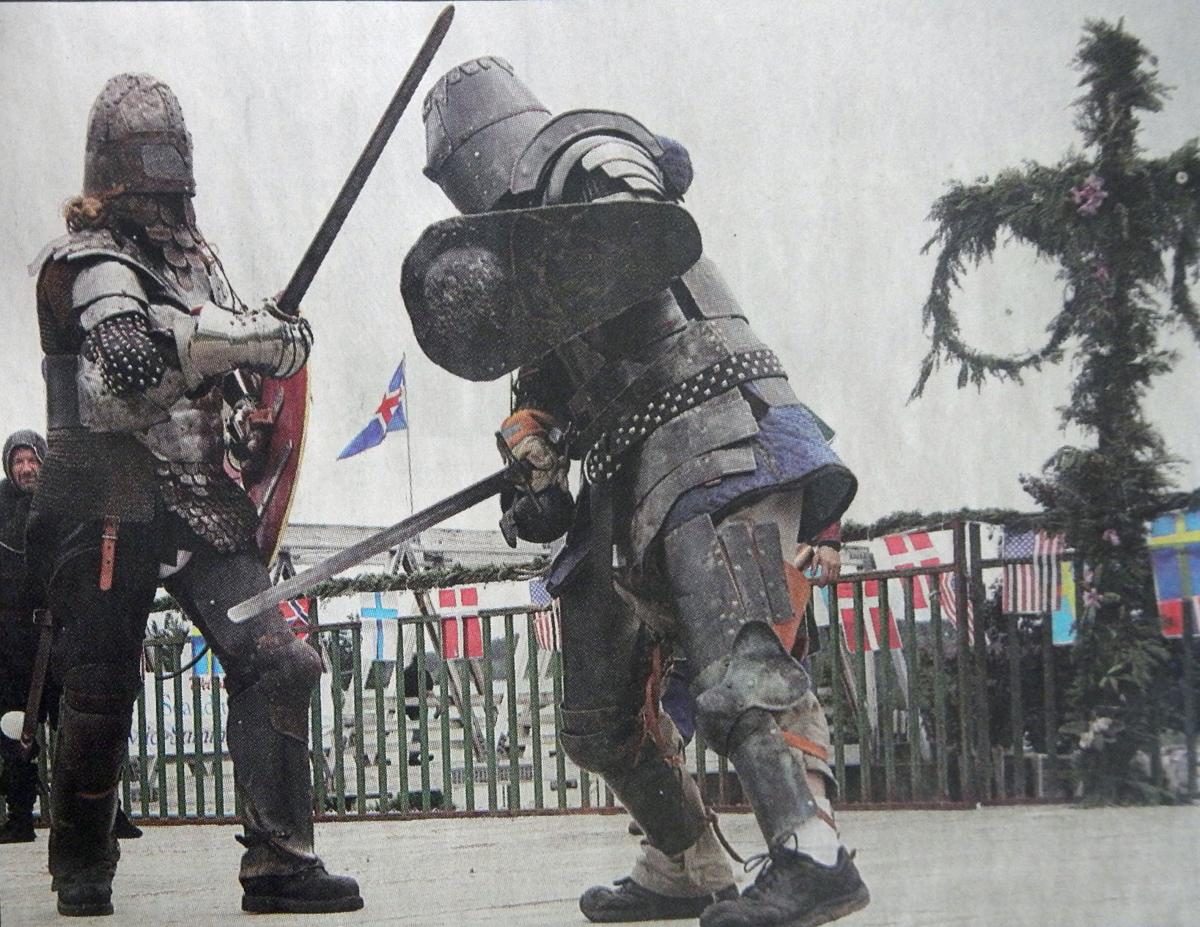 Sean Kottmeier, left, of Goble, and Josh Lucht, of Portland, clash swords in a mock battle at the Astoria Scandinavian Midsummer Festival in 2010. 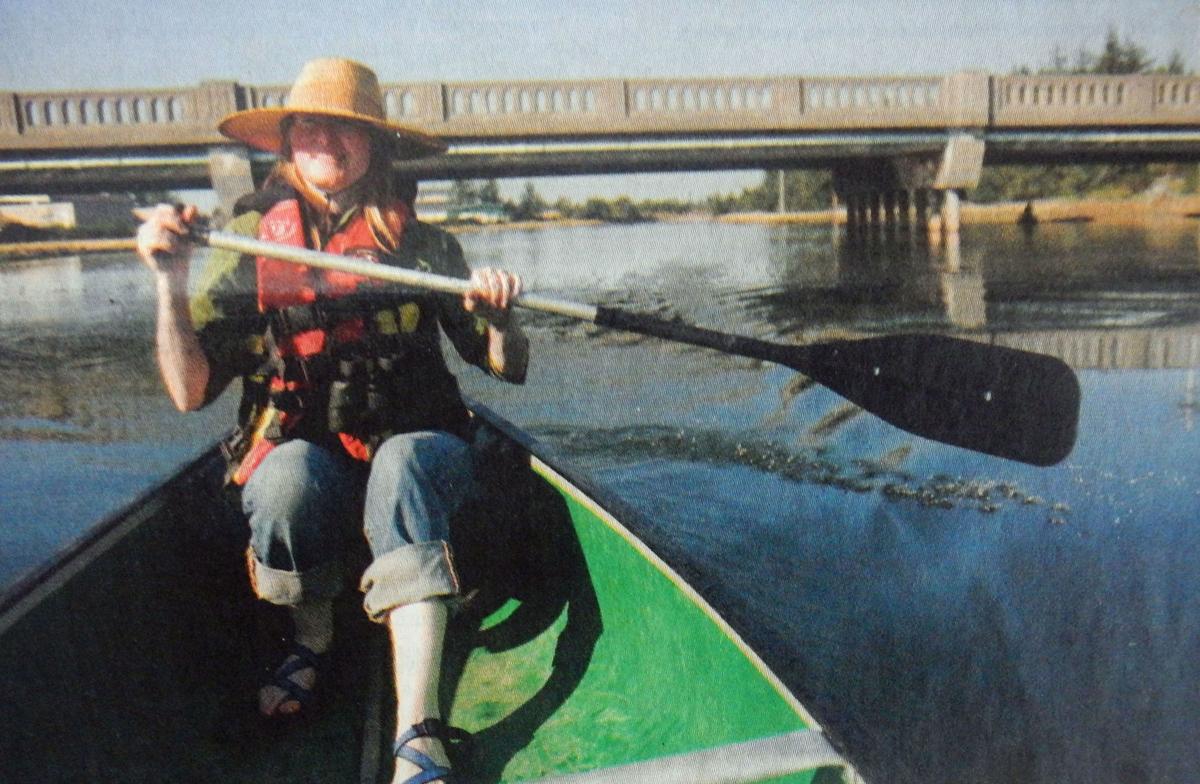 Celeste Coulter, the stewardship director with the North Coast Land Conservancy, enjoys a leisurely paddle up Neawanna Creek past the 12th Avenue Bridge in Seaside in 2010. 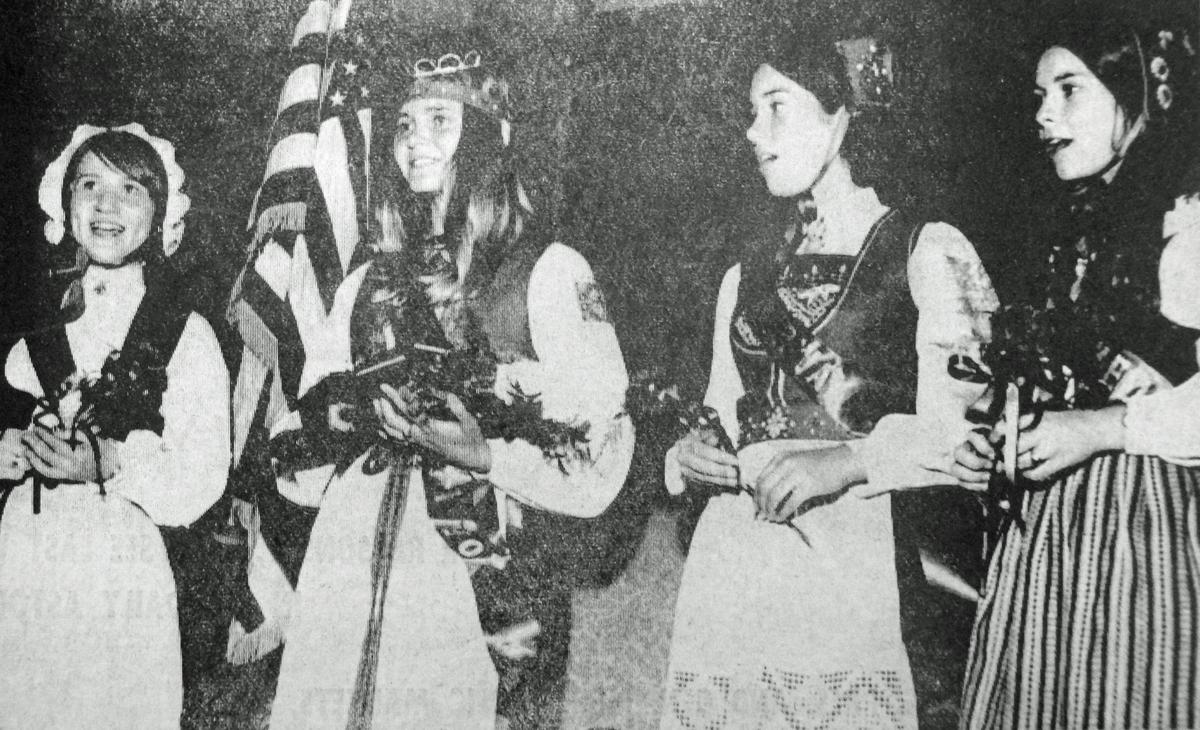 The Scandinavian court and Queen reigned over events in 1970. 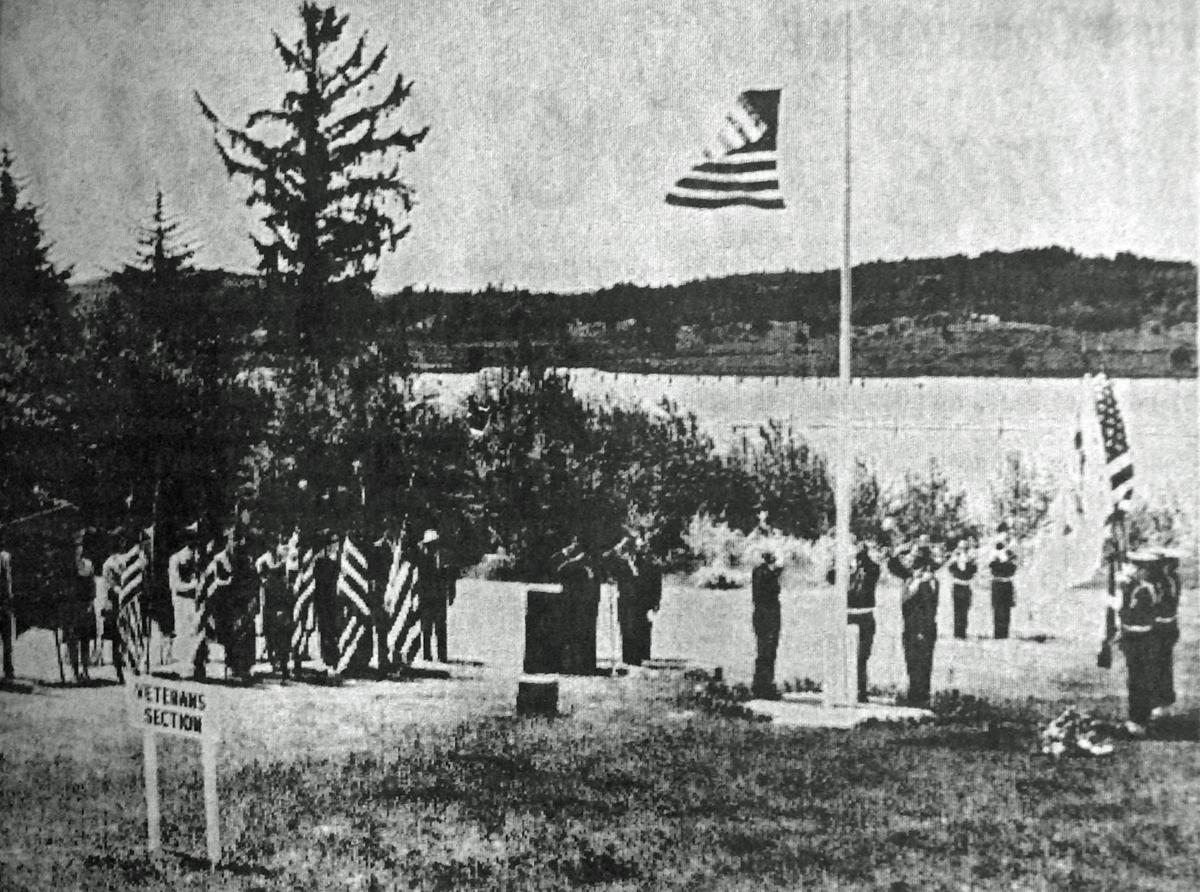 A ceremony was held in 1970 for the dedication of a monument at the site where one of 18 rounds were fired from the deck of a Japanese submarine in 1942 at Fort Stevens during World War II. 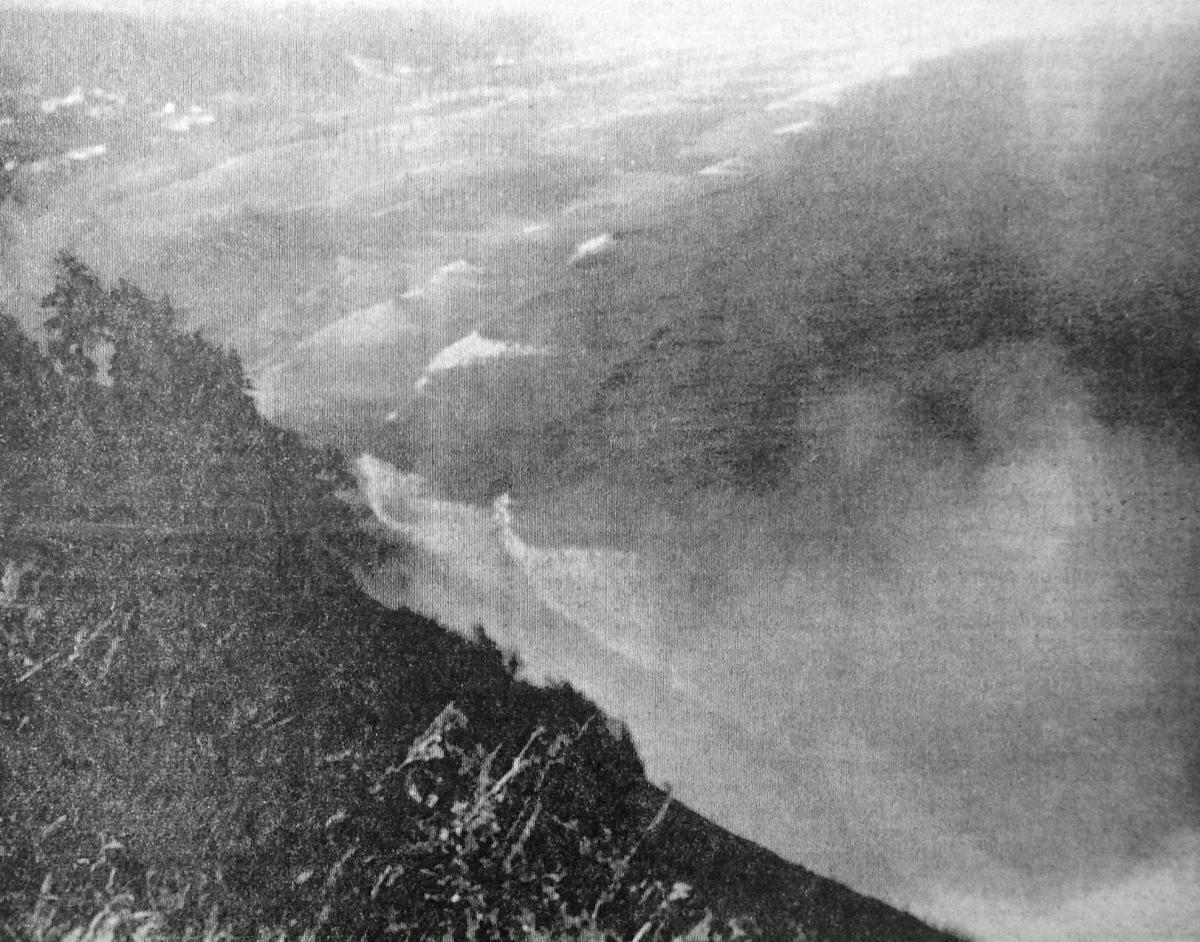 Smoke from the lower Neah-Kah-Nie Mountain fire billows in 1970.

Dancing around the maypole is one of the revered traditions of the Astoria Scandinavian Midsummer Festival in 2010.

Sean Kottmeier, left, of Goble, and Josh Lucht, of Portland, clash swords in a mock battle at the Astoria Scandinavian Midsummer Festival in 2010.

Celeste Coulter, the stewardship director with the North Coast Land Conservancy, enjoys a leisurely paddle up Neawanna Creek past the 12th Avenue Bridge in Seaside in 2010.

The Scandinavian court and Queen reigned over events in 1970.

A ceremony was held in 1970 for the dedication of a monument at the site where one of 18 rounds were fired from the deck of a Japanese submarine in 1942 at Fort Stevens during World War II.

Smoke from the lower Neah-Kah-Nie Mountain fire billows in 1970.

With a 200-year-old tool, tipped with a metal scoop in one hand, and a wooden mallet he calls the “attitude adjuster” in his other hand, Dave Strand made a shoe.

The floor in front of him was littered with wooden clogs of all sizes, including one giant clog painted bright yellow and big enough to be a baby’s cradle.

As people wandered through booths at the Scandinavian Midsummer Festival in Astoria over the weekend, they stopped at Strand’s booth to try on shoes and pose for pictures. Wooden shoes and digital cameras. The contrast was not lost on Strand.

SEASIDE — What once was a dream of a few lovers of local nature is now a vision plan of the Necanicum Estuary Natural History Park.

Consisting of 59 pages of ideas, photos and maps, the report, recently adopted by the Seaside City Council and the Sunset Empire Park and Recreation District, is the result of several months of planning and many years of false starts.

“The idea has been bouncing around for a while now,” said Neal Wallace, who coordinates parks development for the city of Seaside. “The (Seaside) Improvement Commission and the City Council have thought about it for over a decade. The idea for a gateway to Seaside — the notion hasn’t gone away. But don’t want to do a Mill Pond plan and a gateway plan and then down the road realize you could have interconnected the two.

“That’s why we thought the vision plan — an all-encompassing view — was a great way to start. Now we can go back and do all the pieces.”

“Great news!” was how Marlin Martin greeted the announcement of a big influx of money to the North Coast.

His agency has just learned it is the recipient of a $40,000 grant from the Oregon Community Foundation for the purchase of equipment needed for outfitting and operation of the new Clatsop Community Action Regional Food Bank, scheduled to open by late summer.

Visitors from as far away as Greece were on hand for third annual Scandinavian Midsummer Festival’s daylong activities. Months of planning by Scandinavian-descent residents of the area and other volunteers went into the making of the event.

The highlight of the day was the crowning of the new Miss Scandinavia Serpa Perkiomaki who had represented the Finnish residents. She was crowned by outgoing royalty Carol Johansen.

Rep. Wendell Wyatt will work to see the site of the bombardment of Fort Stevens by a Japanese submarine in 1942 is designated as a national historical site, he said Sunday.

Wyatt was principal speaker at a brief ceremony dedication of a monument erected at the spot where one of 18 rounds fired by the deck gun of the submarine I-25 dug a crater in the sand of Clatsop Plains.

An unidentified jet fighter flew under the Astoria Bridge at 8:47 on Monday, according to Claude McDonald, toll collector at the bridge. Several other persons who saw the jet said they thought it flew under the bridge.

“It certainly did go under the bridge,” McDonald told the Daily Astorian. “It was only about 10 feet above the water when it went under the bridge and it set off two sonic booms as it picked up speed.”

They are among 18 college students selected for the summer work, which will involve patrolling nearly 300 miles of Oregon coastline, some 170 of which will be closed to vehicular traffic during the summer.

MANZANITA — Firefighters controlled a 15-acre brush fire Wednesday on Neah-Kah-Nie Mountain. At one time the fire threatened to cross U.S. Highway 101 and burn the higher regions of the mountain.

Citizens of Knappa seem divided in their opinions as to the value of the proposed Boise Cascade green veneer plant in their area, some believing another source of employment is sorely needed for young persons and others sharing the peace, tranquility and perhaps the clean air and water of this pastoral community will be threatened if the facility is allowed.

Some, like Robert Ziak, who is conducting a spirited campaign to keep the plant out of Knappa, are not wholly against industry or Boise Cascade, but fear the laws will not prevent the smoke, the noise and smell associated with lumber facilities and the construction of the veneer plant will lead to further industrial expansion.

The possibility of building a processing plant at Knappa exists, as does the possibility of construction of a plywood or pulp mill somewhere on the 27,000 acres owned by Boise Cascade there. Many Knappa residents believe that once the veneer plant is allowed to come in, in spite of its low pollution potential, other lumber facilities will follow to industrialize and pollute the area.

Jack Allen Pickering, a 15-year-old Portland youth, died from a broken neck when his car, which he was driving in circles on the sand, capsized and pinned him underneath. The body was shipped to Portland for funeral arrangements by the Hughes-Ransom mortuary here.

Mrs. Walter Strauhal, elderly Long Beach woman and member of one of Long Beach’s first families, was hospitalized in Ilwaco when struck by a motorcycle on Long Beach’s main street. Mrs. Strauhal and Mrs. Theodore Jacobsen were sitting on a bench adjacent to the street when one of the motorcycles leaped to the sidewalk and hit the bench. Mrs. Jacobsen received less painful injuries.

As expressed by a sailor at the Astoria naval hospital, movie star Shirley Temple is “really a swell character.” As Miss Temple spent the day Monday visiting hospital wards and attending a dance given in her honor, the little lady of the screen proved that she could be an interesting person whether dancing with the chaplain, jitterbugging with a marine or talking to a man encased in a cast.

The tiny 17-year-old actress was the center of attention at the dance last night where United Service Organizations hostesses gazed in awe at the star and got a look at her two-carat diamond engagement ring while the men stood around trying to get up enough courage to ask her to dance.

The fishing industry was in a lull this week after unusual activity in receiving and processing ocean-caught, filleting-fish, and while waiting for the appearance of the blue-blood of them all — albacore tuna.

Several truckloads of brush, sand and other “props” will be carted into Gyro Field this week to set the stage for the “Here’s Your Infantry” show Saturday at 8:30 p.m.

The combat soldiers who will fire machine guns, bazookas, mortars, automatic rifles and the searing flame throwers will need the props to make it look real.

South Pacific beaches and jungle battlegrounds will be literally moved to Gyro Field in concentrated form tonight by the doughboys who will stage the show. The authenticity of the show is increased by the participation of many men returned only this year from fighting in New Guinea, the Netherlands, East Indies, the Papuan and other campaigns.